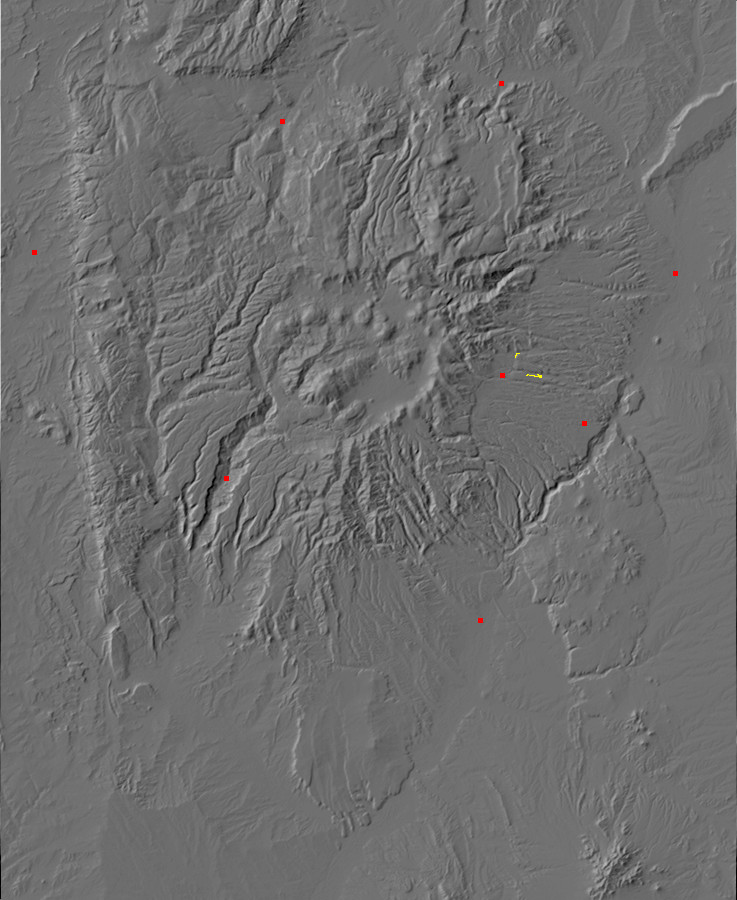 Spring is upon us, more or less, and this means I have resumed some tentative short wanderings in the wilds of Los Alamos.

But first, a word from our sponsor. 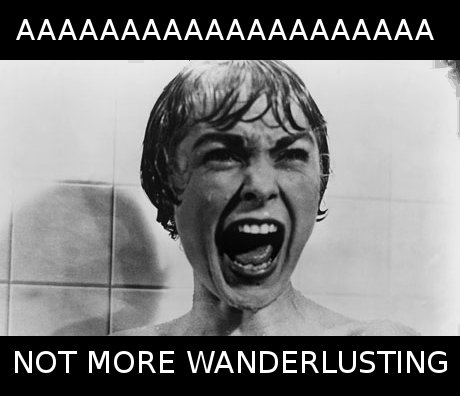 So the first trip did not actually leave Los Alamos city limits. It began east of the town golf course, at the location of a major fault escarpment. Or, to be more precise. in a canyon that cuts across the fault escarpment. 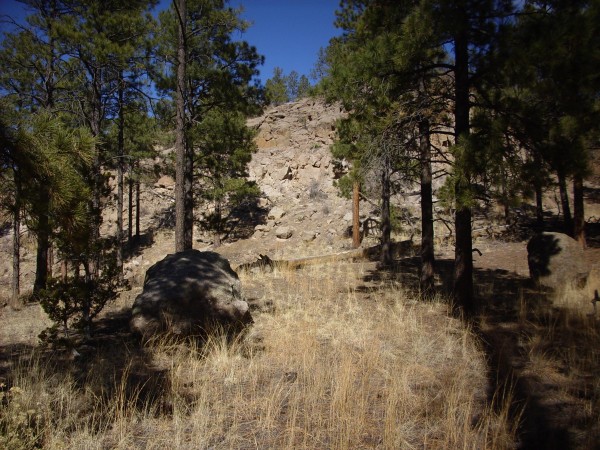 This is the Guaje fault. It turns out that the town of Los Alamos actually sits in a very shallow graben, labeled the Diamond Drive Graben on the latest NMGS map, with the west horst being the Pajarito Escarpment at the base of the Jemez Mountains and the east horst being this fault you’re looking at. Both expose a large section of Tsherige Member, Bandelier Tuff, the ubiquitous rock of the Jemez area. However, the rock on the west side is much more tightly welded (being closer to the source vent), has weathered differently (being in a wetter zone), and so is much darker brown than the light pink tuff you see here. It’s a horst of a different color.

My hike took me along the fault escarpment, then though a cross-cutting fault along which a very narrow canyon has been eroded. As one proceeds north towards the slot canyon, one starts to see exposures of Tshichoma dacite brought to the surface by the fault. 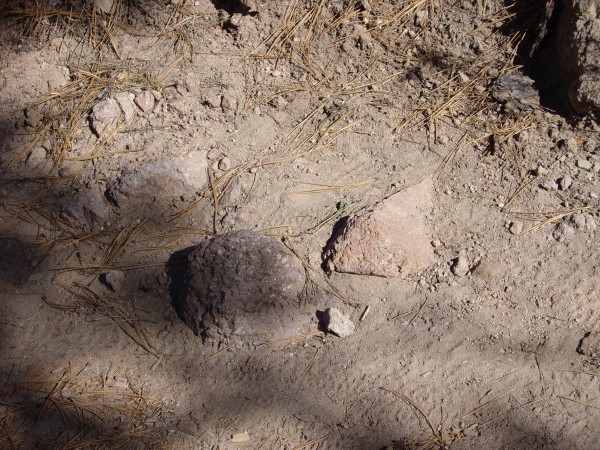 The picture isn’t terrific, but you see a boulder of Bandelier tuff on the right and a boulder of Tshicoma dacite partially in shadow on the left. Tschicoma dacite is quite distinctive because it’s a much more solid rock than the relatively soft tuff, and it invariably sports large phenocrysts of plagioclase feldspar. You can see these in the photo as white spots on the rock. I’ll have even better pictures later.

After hiking north about half a mile, one reaches the slot canyon heading east. This is part of Rendija Canyon, which becomes quite substantial further to the east. 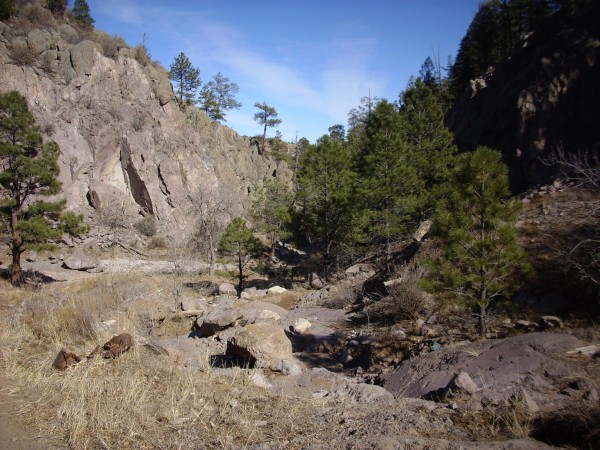 Both sides of the canyon are now Tschicoma dacite, but the wall on the right (south) is topped by Bandelier tuff while the wall on the left is bare. The Bandelier tuff ponded against the older dacite to the left when it was first deposited, and then the tuff preferentially eroded away at the point of contact to produce this canyon. Erosion continued cutting down into a second fault line trending west southwest to east northeast. If memory serves, this second fault is the Rendija Canyon fault. 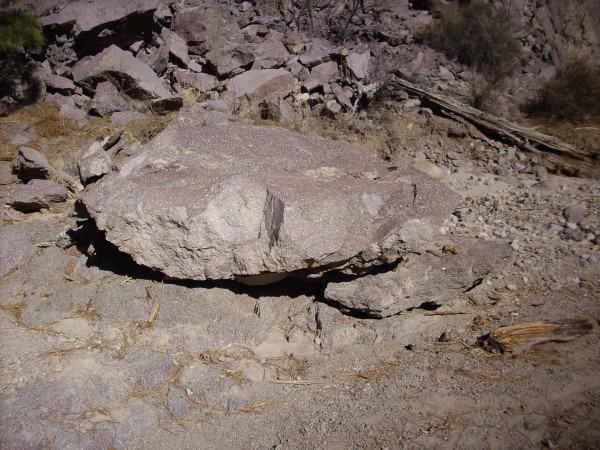 The canyon is floored with large clasts of Tshicoma dacite like this one, which is roughly the size of my Korean clown car. Here’s a close up photograph: 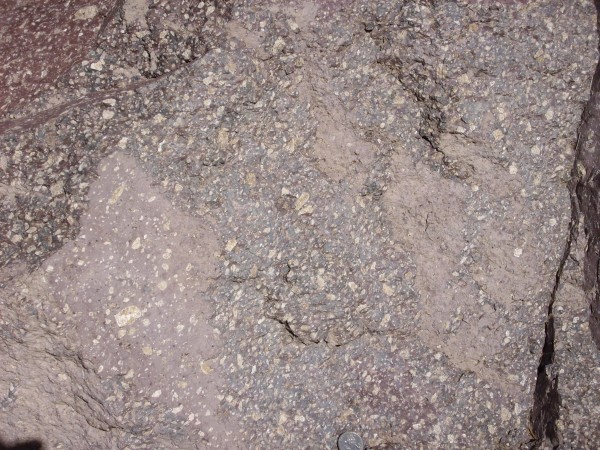 There’s a quarter at the bottom for scale. This lava would have erupted out of the vent (several miles to the west) as a thick sticky sludge full of these feldspar crystals. In some cases, the lava was a bit more fluid, as with this boulder full of flow bands: 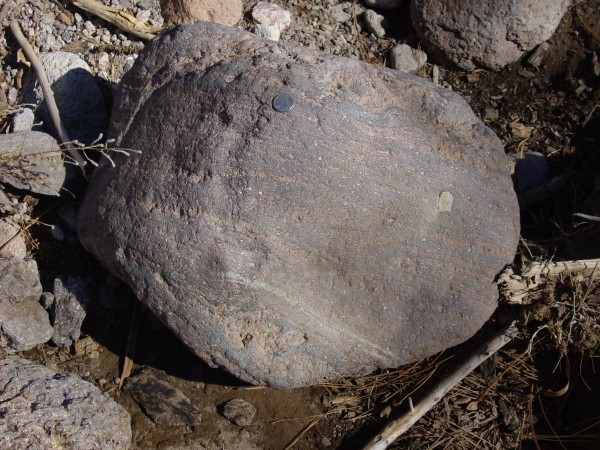 Halfway up the canyon wall, there’s this big rubbly patch: 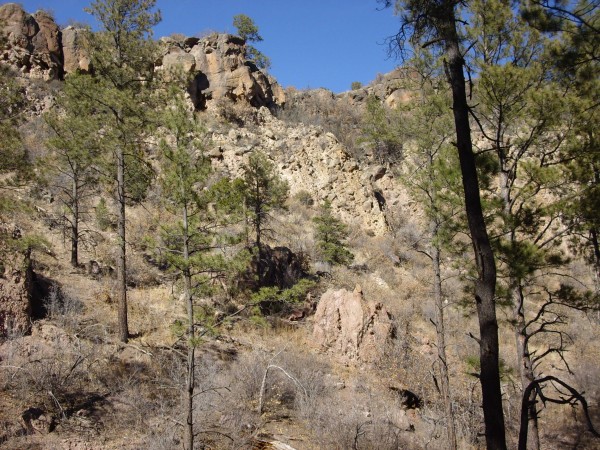 This is probably a small block and ash flow, which is a kind of pyroclastic flow. A block and ash flow forms when the side of a high-silica dome or flow becomes steep enough to collapse under the force of gravity. With the pressure on the underlying lava reduced, much of the lava explodes into red-hot ash and gas which mingles with the larger blocks in the flow, with the whole mass roaring downhill and destroying everything it its path. The mechanism is a little like the famous eruption of Mt. St. Helens, but on a vastly smaller scale. Or you can think of the famous eruption of Mt. St. Helens as the Mother of All Block and Ash Flows. I’m easy.

The trail turns back south and climbs onto the east (high) side of the Guaje fault scarp, and for quite some distance follows the approximate contact between the Tshicoma dacite and the Bandelier Tuff. Here’s a badly weathered pumice bed along the contact. 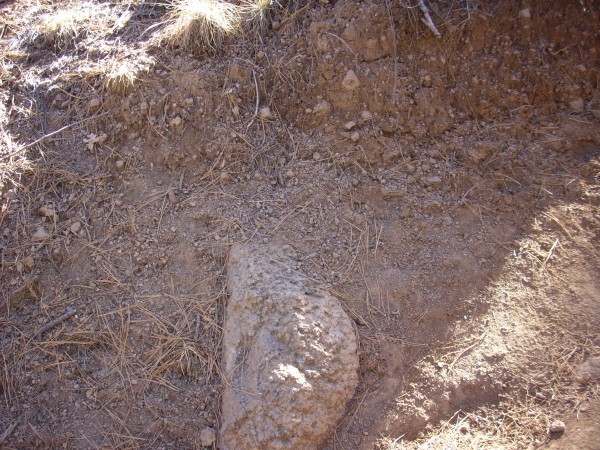 That’s a big boulder of Tshicoma dacite underneath. It’s hard to tell just what this pumice is. There are pumice beds at the base of both members of the Bandelier Formation, and since this is on top of Tschicoma dacite and below a hill of Bandelier Tuff, this could be basal poumice. Another possibility is that it is Cerro Toledo tephra that is also mapped in the area. The Cerro Toledo tephra was produced by relatively small eruptions from inside the caldera between the two Bandelier events. A third possibility is that this is a deposit of the so-called Golf Course Pumice, since we are close to the golf course here. The Golf Course Pumice was erupted shortly after the second Bandelier event from Cerro Del Medio.

The trail comes into view of the Los Alamos cemetery, Guaje Pines. 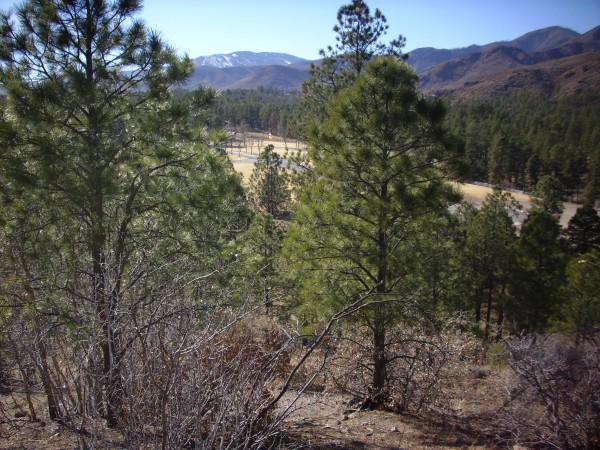 And finally back to solid bluffs of Bandelier tuff: 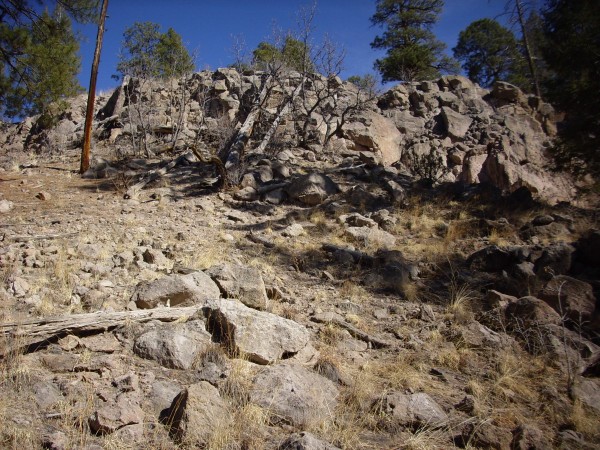 And from there back to the trail head.

The second wanderlust was into Pueblo Canyon north of the Los Alamos airport, there and back again. This is a typical canyon between finger mesas of Bandelier Formation, which is particularly well exposed here.

The trail starts out along the south rim of the canyon, affording a wonderful view of the Bandelier Formation on the north canyon wall. 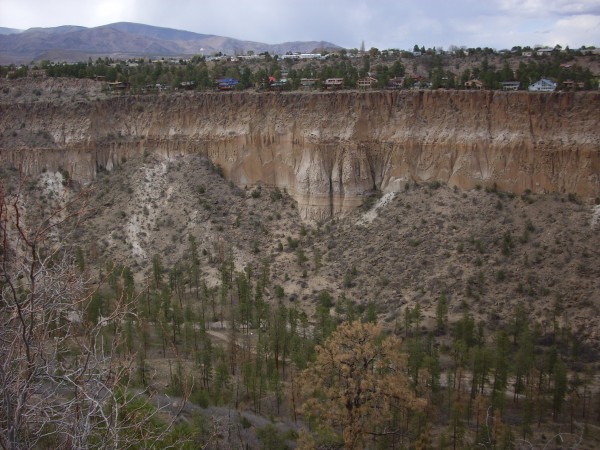 The top three layers are units of the Tsherige Member, Bandelier Formation. The topmost is partially obscured by houses and trees on the canyon rim. The second layer plunges into the canyon, and the third layer reaches to the sloping ground at the canyon bottom in most places. These are three cooling units, erupted far enough part in time that each had cooled slightly before the next was erupted on top of it.

In a few places, such as the center of this photograph, you see a narrow banded layer with just a little of an eroded formation showing beneath it. The narrow banded layer is the Guaje Pumice unit of the Tsherige, which was a pumice eruption immediately preceding the cataclysmic eruption that produced the tuff layers of the rest of the Tsherige and also created the Valles caldera. The Tsherige has been dated at having taken place about 1.2 million years ago.

The formation just peeking out underneath is the Cerro Toledo Formation mentioned earlier. 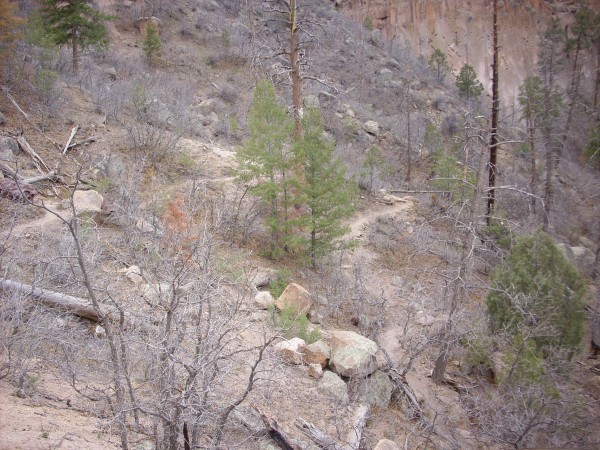 But one of the attractions of the canyon is the hoodoos, or tent rocks, that are found typically at the level of this purported talus slope. 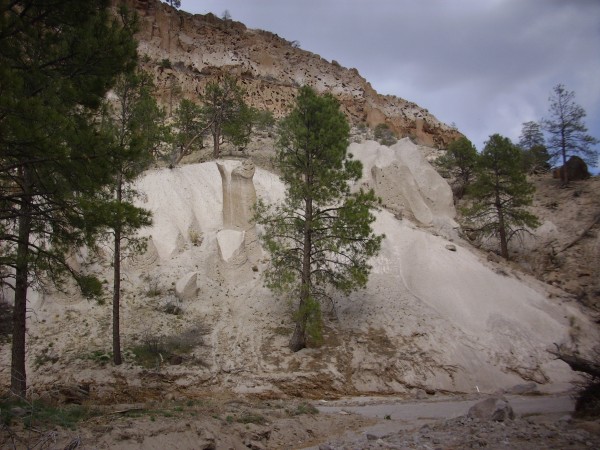 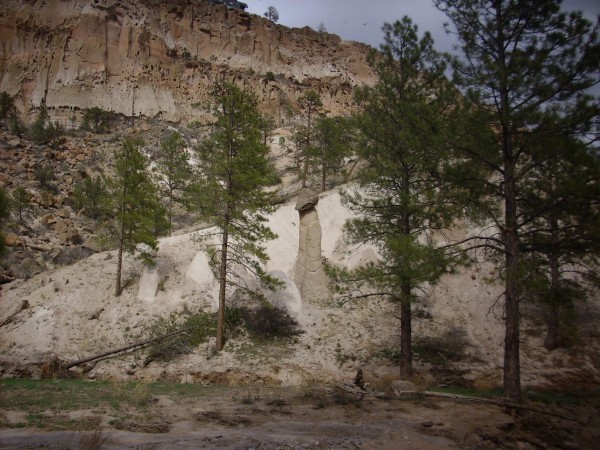 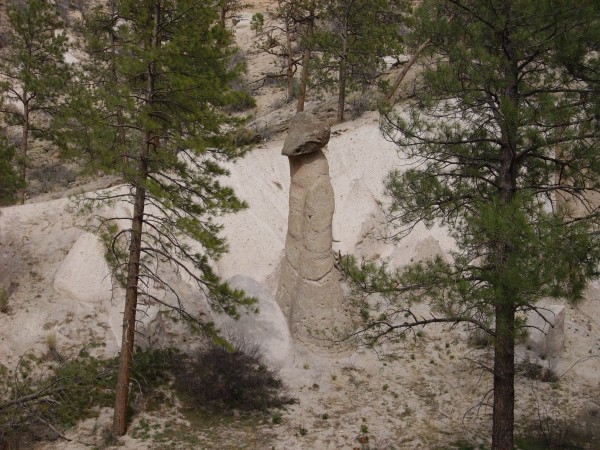 I went up and examined the eroded bank of this slope, and it’s clearly solid tuff, with few signs bedding or any other indications that this is reworked volcanic sediments rather than an original pyroclastic flow. 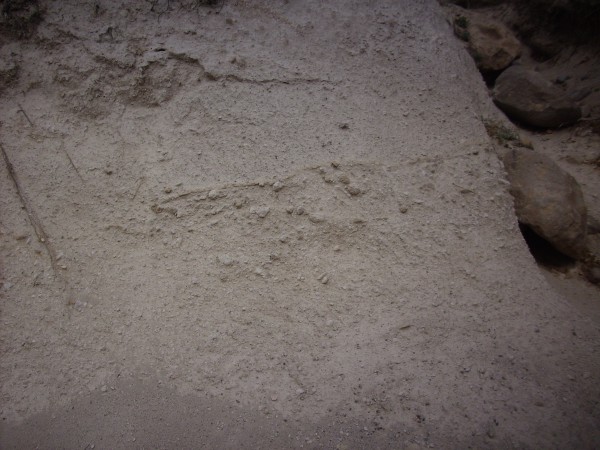 To be sure, there are no signs the tuff is welded, but the Otowi Member of the Bandelier Tuff is generally not welded in the Los Alamos area.

So what we’re seemingly seeing is tall, hard mesas of Tsherige sitting on top of low, gently eroded ridges of Otowi. Which raises all sorts of interesting questions to which there are probably good answers which I don’t know: How rugged was the Otowi surface when the Tsherige erupted onto it? (It had had 400,000 years to erode.) The Tsherige presumably settled preferentially in river channels; are the current finger mesas aligned with those paleocanyons, so that we’re seeing a reverse image of the Otowi surface? Or is it the other way (current canyons aligned with paleocanyons)?

Going back to the original photo, of the north wall of Pueblo Canyon, one can easily imagine the gentler slope showing the outline of the Otowi topography, with a paleochannel near the center of the photo which became partially filled with Cerro Toledo tephra. The sediments might well have been unusually wet. The deposit of Tsherige Member, Bandelier Tuff, on top would have vaporized the water, account for what look like vapor phase pipes in the Tsherige Member above the paleochannel. It all kind of fits.

Here’s another shot of the base of the Tsherige, where the Guaje Pumice and Cerro Toledo Formation have been deeply eroded into the canyon wall. 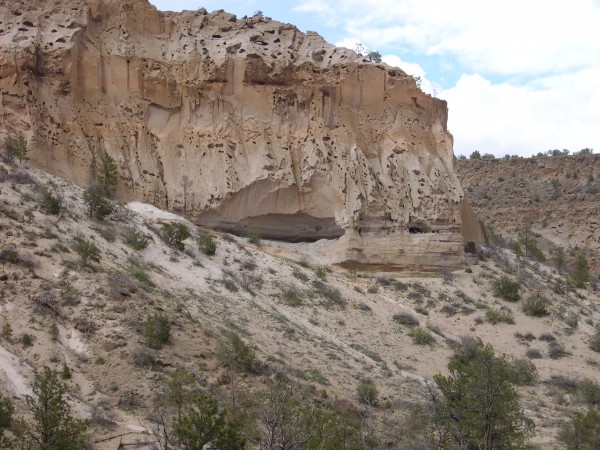 Another shot from across the canyon. 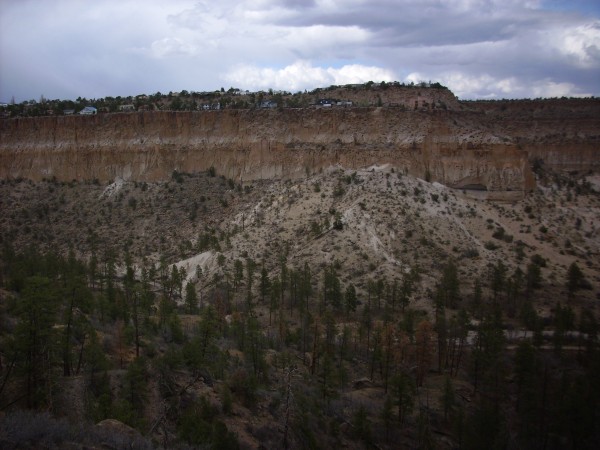 If I was filthy rich, by which I mean if I was swimming in a putrescent flood of quatloos, I think I’d buy that pink castle at the end of the mesa.

I know; I own a castle on top of a canyon already. But my castle has less than half the floor area (I’d estimate), needs some serious renovation, and the canyon is only about fifteen feet deep. Anyway, if I had that kind of wretched excess of wealth, the pink castle would be a vacation home, because SWMBO would doubtless insist on moving away from here to somewhere with decent services for my autistic son. 🙁