I woke up early, or perhaps I should say I stopped trying to sleep early. The pad I brought was pitifully inadequate and both hips were bruised. But the tent was still standing and I had gotten some kind of rest.

Breakfast was reduced-sugar oatmeal with reduced-sugar Craisins and flax meal, washed down with Glucerna. Did I mention I am diabetic? The stuff is actually pretty good; unfortunately, also somewhat expensive. I eat cheaper, simpler, and blander at home.

I packed my tent and rolled out through the park. 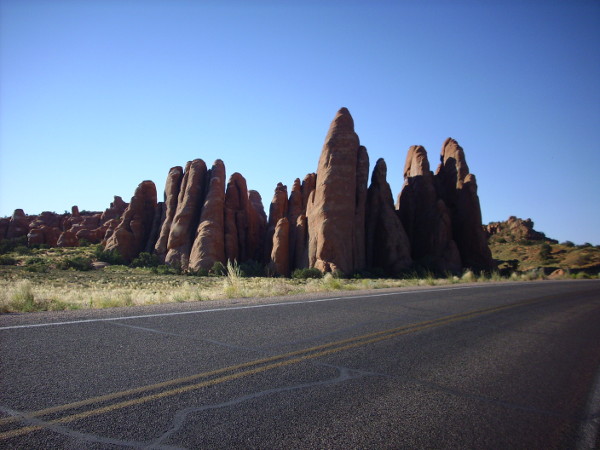 The fins formed when the sandstone fractured along parallel planes due to underground gypsum dissolving out from under this area. The wind gets into the fractures with blowing sand grains and does the rest. This is likely Entrada Formation, the chief arch-forming formation in Arches.

The next picture shows a formation in the distance. Click to enlarge and zoom in. 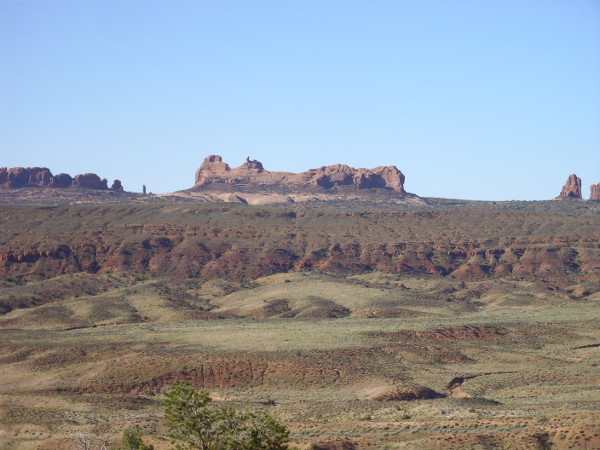 The top of the distant formation is probably upper Entrada Sandstone, which is fairly resistant to erosion. The lower Entrada Formation beneath it is a softer mixture of sandstone and shale that erodes faster, which undermines the upper Entrada to form vertical cliffs. Under that is the Navajo Formation. Or so most of my sources say; geologists apparently love to argue over definitions of formations. In front of the formation is a large fault, and I don’t know what the formation is that has been exposed. It’s kind of a jumble. 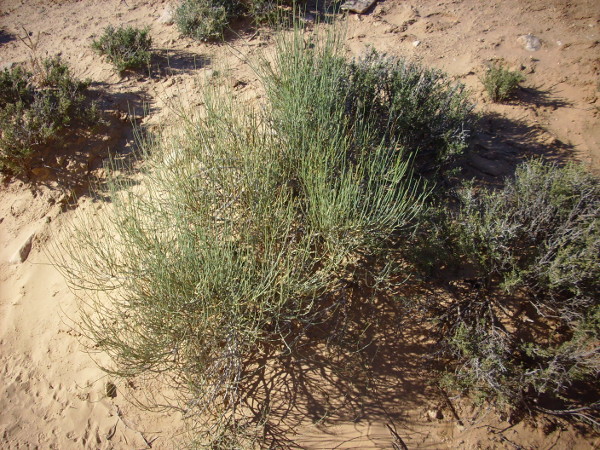 This photograph shows the Moab Fault west of the park entrance. The displacement is something like 1400 feet here, with the downthrown side to the east (where I’m standing to take the photograph.) 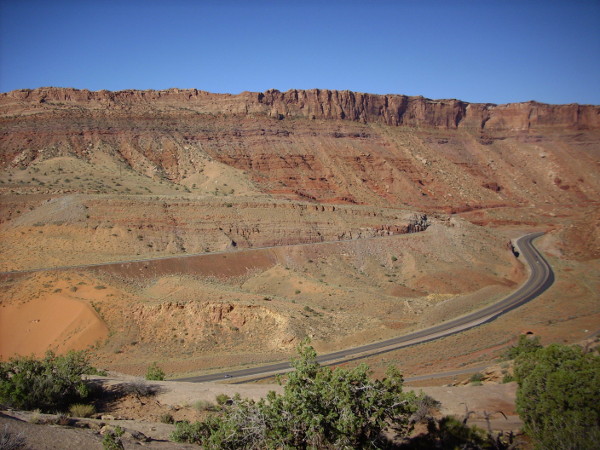 The park provides a helpful interpretive diagram. Click to enlarge. 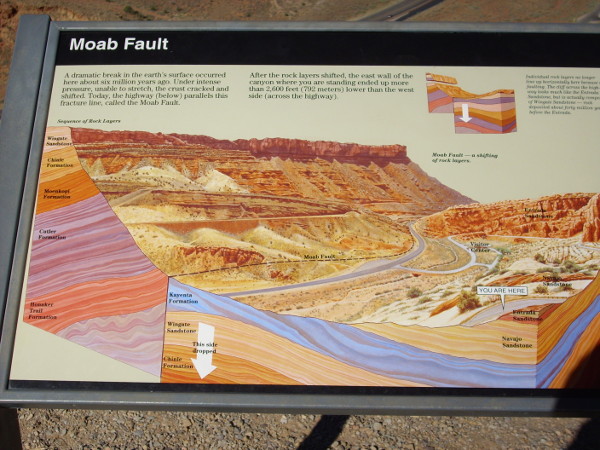 This shows Entrada over Navajo as the rock units in the park. It’s good to know I remembered it right.

This view of the headquarters area corresponds fairly closely with the previous diagram. 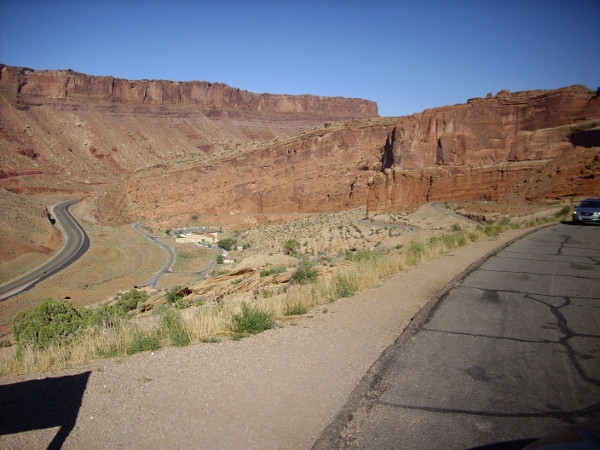 I quit the park and headed into Canyonlands National Park, making excellent use of my new annual park pass, and visited Upheaval Dome. This was once thought to be a dome produced by upwelling gypsum, but is now confirmed to be an old meteorite impact crater, since there is shocked quartz and shatter cones in the center of the dome. The hike in is short but difficult. 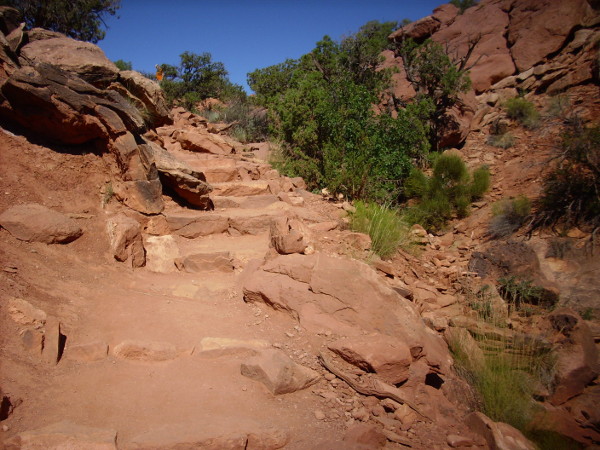 I’ve attempted to make a panorama out of my photographs from near the first overlook.

The trail to the second overlook is quite challenging, and I was huffing and puffing when I got there. The Chinese tourists on the trail seemed to be doing fine; it’s no wonder they’re getting ready to foreclose on us.

There were lots of French tourists, too, for some reason. Maybe they figure the Chinese won’t let them in once they’ve foreclosed on us.

This is a close up view of the center of the crater, showing the sedimentary beds that rebounded after the impact. I thought I could see some shock cones in this area through my binoculars, but erosion can produce similar-looking structures. 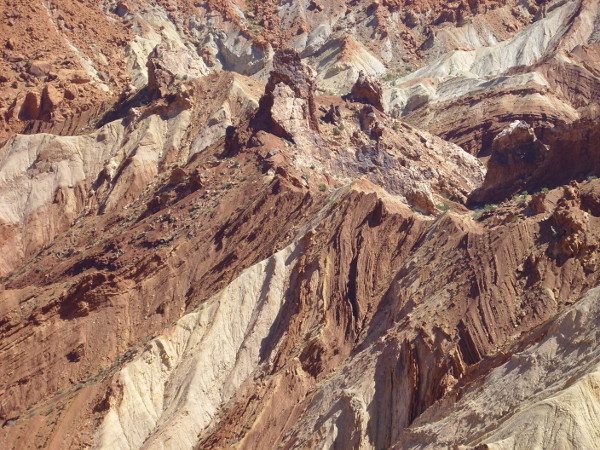 Another view of the dome from the second lookout. 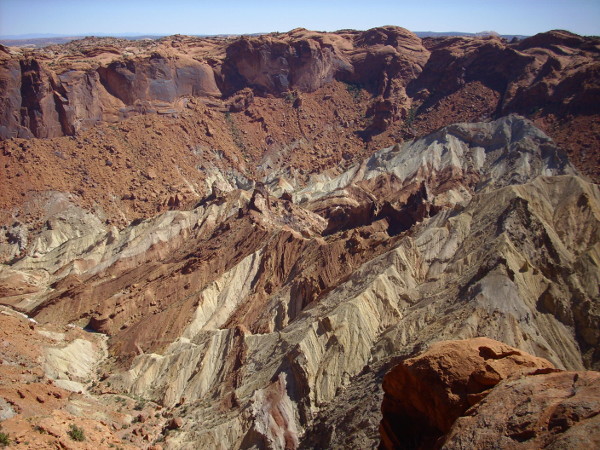 I noticed a thin white bed in the surrounding sandstone while hiking out. Bits of it look for all the world like tuff, but close examination through my prized loupe (a welcome gift from Cindy) makes it out to be a light sandstone with lots of clay in it. It may nonetheless be a 140-million-year-old marker for a long-forgotten volcanic eruption upwind of this area, since clay is one weathering product of volcanic ash. 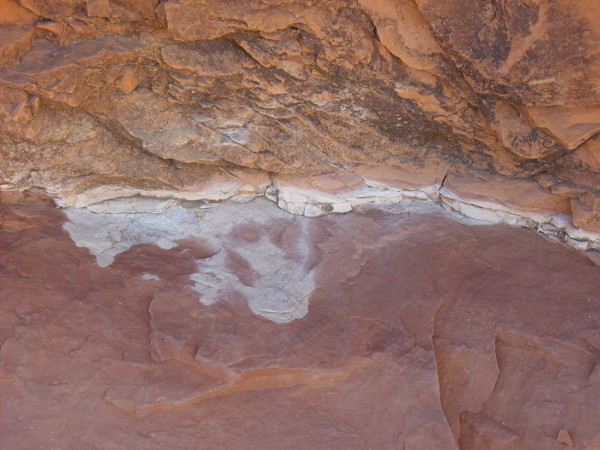 I began the hike back. I got quite winded at one point; I took my pulse and found it was 150 beats per minute. I figured I shouldn’t be pushing myself that hard and took the rest of the hike a little easier.

Then I began the long, long drive to Orem.

The first part of the drive isn’t bad. The scenery is spectacular. You’ve already had samples. (I should probably have taken more pictures anyway.) But then things get rather dull: The road crosses over the Mancos Shale, which was laid down about 90 million years ago in the Cretaceous. It’s basically shallow sea mud, and even more boring than that sounds. It weathers into nondescript brown hills that even geologists have trouble getting excited about. Fortunately, towering above it are the Book Cliffs. I had to take a picture in honor of Bruce, who is the most ardent bibliophile I know. This is just north of the junction with I-50. 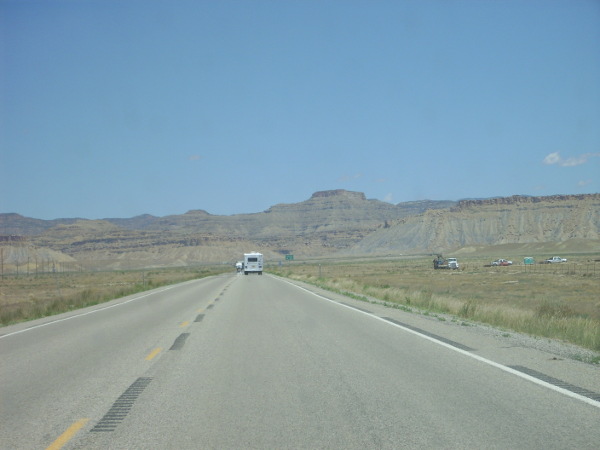 The Book Cliffs are formed from a layer of resistant Cretaceous sandstone that protects the softer Mancos Shale underneath.

From here it’s endless mile after mile of nondescript Mancos shale with somewhat more interesting rocks off to the sides. The road goes to Green River, where I got refueled up again and ate some snacks, and then to Price along a long drive on Mancos shale with Book Cliffs to the east and the San Rafael Swell to the west. I should probably have taken a picture of the San Rafael Swell, but the road didn’t get close enough for a picture that would really do them justice. The Swell is quite spectacular. I recall driving with Lori, my older sister, from Provo to New Mexico in the early 1980s, when a landslide had blocked Price Canyon and we had to take I-50 across the Swell. We both marveled at the beauty of the area. This particular trip was also memorable because Lori abruptly asked me if Robert might be the right man for her, and I hardly paused before suggesting that he might. They got engaged not long after and it’s now been, what, 30 years?

The road eventually passes through the Book Cliffs at Castle Gate, north of Price, and into the mountainous spine of Utah. 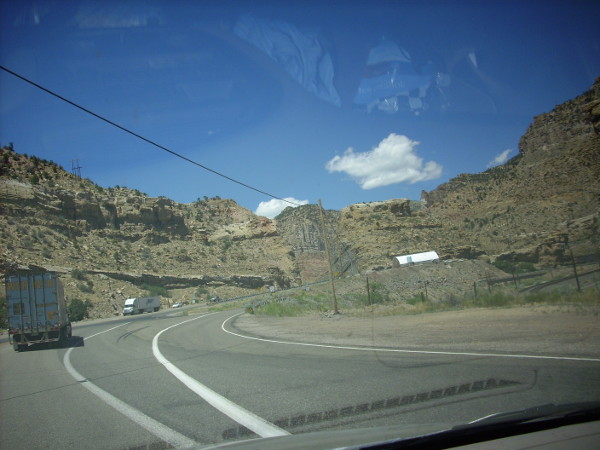 It was tough to hold the camera level while trying to steer at 70 MPH. I don’t recommend trying this.

The canyon cuts through impressive limestone, shale, and sandstone beds with the occasional coal bed, but I just wanted to be in Orem by then and didn’t pause for many pictures. I did take a picture of a particularly spectacular conglomerate, but the picture doesn’t do it justice: 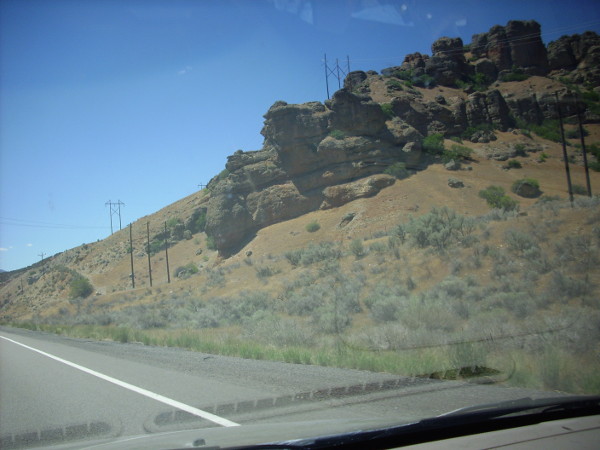 The author of my road log was also sufficiently impressed to mention this conglomerate, noting that it was eroded off mountains of the Sevier Uplift to the west.

Alas, Utah has its nuttinesses: 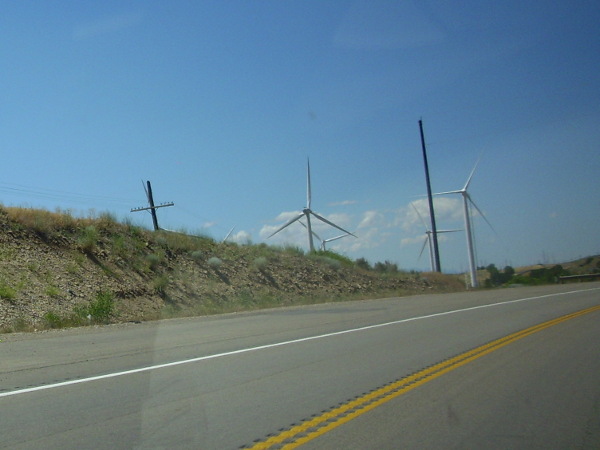 Bird dicers at the mouth of Spanish Fork Canyon. Renewable energy proponents just can’t stop tilting at windmills, can they?

Then in to Orem and my sister’s place. I stayed with her the night, went with her to church the next morning, and then we all left for my brother Scott’s place in Logan. I’ll cover the trip there and the stay at Bear Lake in the next installment.