My whole family and I are active Mormons, so Sunday I attended church with my sister. Much of the meetings revolved around the experiences the teenagers had the week before reenacting the story of two handcart companies that got caught in a blizzard in Wyoming while trying to reach Utah before winter. It’s funny how the debacles sometimes have more historical resonance with us than the successes; it’s rather like the Australian/New Zealand commemoration of Gallipoli, which was a military disaster for the Commonwealth.

After a light dinner, we all headed out for my brother Scott’s place in Logan, Utah. The road goes north past Salt Lake City and the Wasatch Mountains and cuts through a fairly spectacular canyon through the Wasatch to Cache Valley. There are lots of roadcuts: 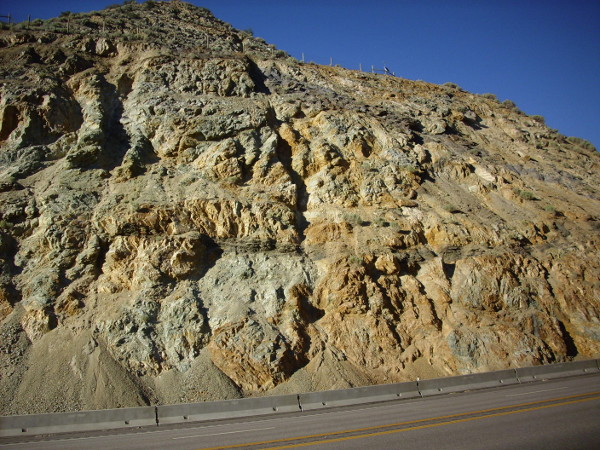 This particular roadcut shows the rather jumbled contact between Precambrian schist on the left and Cambrian Brigham Formation quartzite on the right. This contact is seen throughout much of the world and is sometimes called the Great Unconformity. Prior to the Cambrian Period, much of the landmass of Earth formed a single supercontinent that was above water, and so few places have any sedimentary rocks dating to just before 540 million years ago (the start of the Cambrian.) The older rocks were heavily eroded during this time. At the start of the Cambrian, the supercontinent began breaking up, and a fair amount of sediments began being deposited in shallow seas. The Brigham Quartzite was such a deposit, consisting largely of sand dunes of almost pure silica. This was followed by limestone, dolomite, and shale in a shallow marine environment — a pattern seen across much of North America. Not New Mexico, as it turns out; there are practically no Cambrian sedimentary rocks in New Mexico, suggesting our state was still above water throughout this period.

The Cambrian is also when oxygen levels first became high enough to support an explosion of animal life. Thus the Cambrian rocks are, in many places, the first rocks that contain fossils. As a result, the period from 540 million years ago to the present has historically been the focus of geology, even though the preceding Precambrian is the bulk of the Earth’s history, covering the period from 4.5 billion years ago to 540 million years ago. It’s simply hard to make sense of all the Precambrian rocks when they are so heavily eroded and metamorphosed and never show much in the way of fossils. 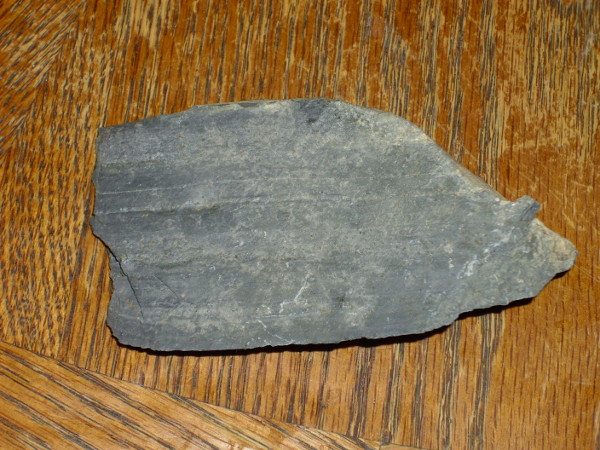 This rock was originally shale, or mudstone, likely from some ancient seabed. It was subsequently deeply buried, heated, and compressed, first becoming slate and then becoming shale as much of its mineral content recrystallized as flaky minerals like mica and phyllite. The photo doesn’t do it justice, but where the rock has broken, you can see the layers of flaky minerals. These are not particularly abundant in this schist, which borders on still being slate. 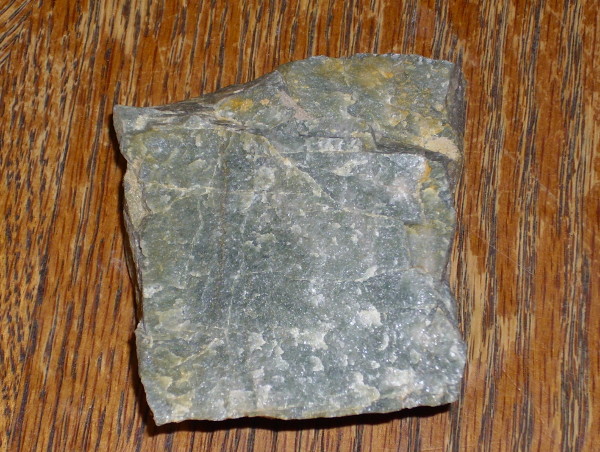 Again, the photo doesn’t do it justice. This is a lovely deep green translucent rock that would make a stunning counter top if you could afford to cut and polish it. Like the Precambrian schist, it has been deeply buried and strongly heated, but because the parent rock was almost pure quartz, no flaky minerals have formed. The green color is probably from reduced iron, and when the rock is exposed to air and water long enough, it acquires a very thin patina of rusty brown oxidized iron.

My road log did not describe the formations above the Brigham quartzite in any detail, except to say that they were limestones and dolomites ranging in age from the Cambrian to the Permian (540 million to about 250 million years ago). I did pick up a particularly nice dolomite that is probably Ordovician in age (about 460 million years old.) 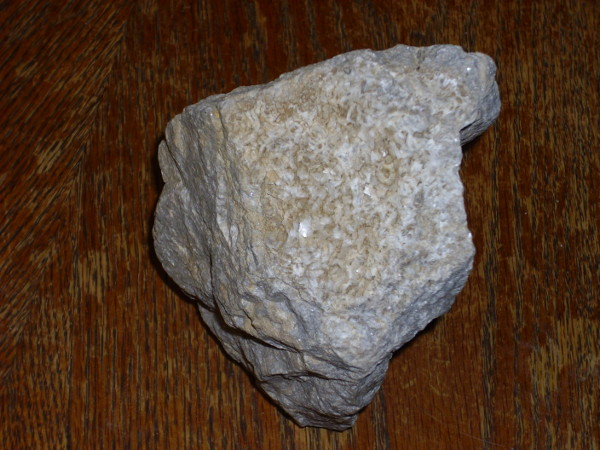 Aside from my road log and the location, I know this is dolomite because it is just a little harder than limestone, fizzes very slightly when I drip hydrochloric acid on it, and has the nifty crust of crystals that look almost, but not quite, like calcite, to which dolomite is chemically similar: Dolomite is calcite in which part of the calcium has been replaced with magnesium.

From there I proceeded to Logan and Scott’s house. I arrived about the same time as Lori’s family and Mom, and we were joined later by Susan’s family. We have a good yak about how the families were doing and stuff, then retired for the night.

The next morning I took a few pictures of family, of which only this one turned out well. 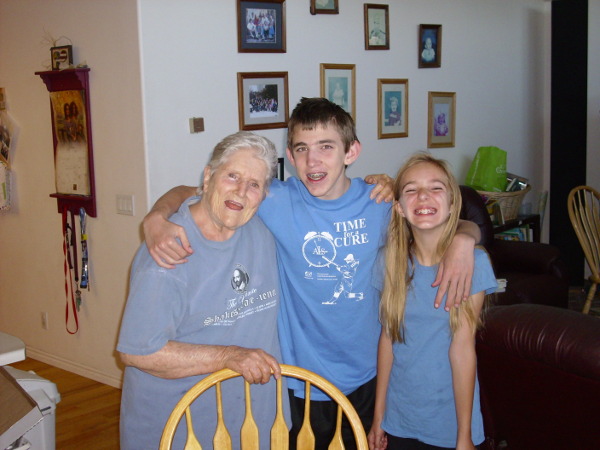 That’s Mom on the left, with Scott’s kids Tim and Catherine. Tim is close in age to my son Michael, and the two often get together by phone to play multiplayer Wii games. Catherine is about 10, a chatterbox and a hoot. It’s a real pleasure to be with them all.

Scott had to finish up a paper before leaving for Bear Lake, which turned out to be just as well. I went to pick up some groceries, and on the way back to Scott’s the car began sputtering and the engine light began blinking. Well then. The engine light is actually on all the time; some years back, some field mice chewed through a sensor cable, I took it in to the dealership, and the folks there told me I didn’t actually need that particularly sensor on the manual transmission version of my Korean clown car, it would cost me $300 to fix, and they didn’t see the point. So I’ve lived with a perpetually lit engine check light ever since.

The car acted like it was missing, badly. After some hemming and hawing (and my older Scott nephews opining that my car didn’t sound any worse than their friends’ junkers) I drove to the local dealership and let them figure it out. Turns out I had a bad spark plug cable on one of the cylinders and it was, in fact, not firing at all. An hour and a half and $140 later, my car was back to running as well as it ever does, Scott had finished his paper, and we were off through Logan Canyon. 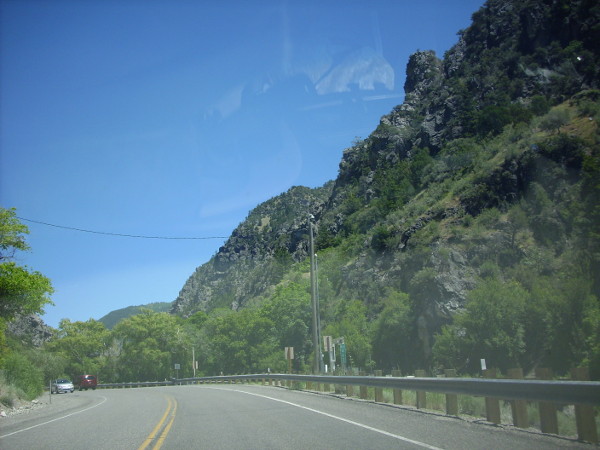 The canyon is spectacular, with some wonderful fossils. There is even  a Brachiopod Summer Home Sites, according to my road log. (Clams got summer homes? Who knew?) And some impressive glacial deposits. All of which I had to zip past, because we were already behind schedule and Scott was behind me to pick me up if my car broke down again.

I did stop at the overlook for Bear Lake: 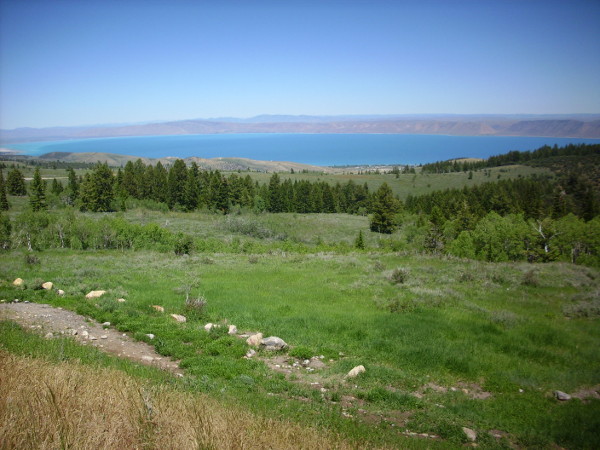 From there we chased back and forth a bit to try to rendezvous with Lori’s family and Mom. (Our motel was not ready for us to check in just yet.) I headed up to the Bear Lake Tabernacle, only to find Scott was no longer behind me; then my cell phone buzzed and Scott told me to head back to the Paris cemetery, which I took a little time to find. My father and most of his family are buried there. My mother will be buried there someday. I would like to be buried there as well, just not right away.

No pictures. Perhaps another time.

Then back to the Bear Lake Tabernacle. 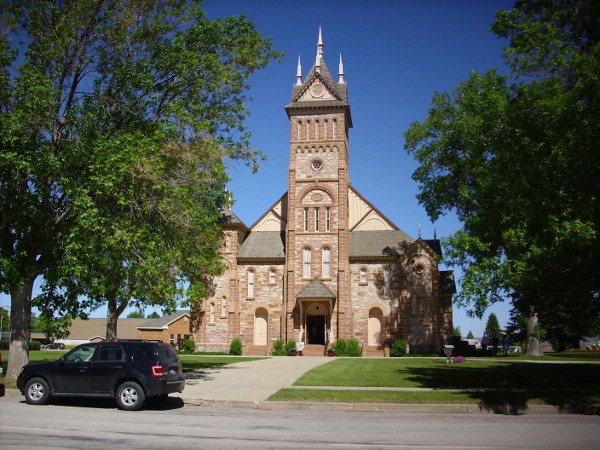 This is typical Mormon pioneer architecture. There is a pipe organ inside where my mother first learned to play organ as a girl. The rock is beautiful red sandstone, easily quarried and shaped. It is not terrible durable, alas, and the south side of the tabernacle already shows protruding mortar where the sandstone blocks have eroded back.

I asked about where the stone came from, and, to my surprise, the tour guide knew — from a quarry in the Indian Hills eighteen miles southeast that is still active. This looks like the right spot, being about that distance and direction. This would be sandstone from the Nugget formation, judging from my road logs.

We then went to Garden City and checked into our motel. My room had a bed, a functioning toilet, a small freezer, and a stove with one working burner. Meh. Good enough. The rest of the family went for raspberry shakes. My pancreas can’t handle those, so I took a walk along the road back up to Logan Canyon. I needed the exercise after sitting in a car or at a dealership all day. Tangent: While waiting for the car repair to be completed, I found myself watching what kids’ cartoons are like nowadays. My, oh my.

The road back to Logan Canyon was under repair, and it was being paved with gravel made from a lovely quartzite local to the area. I resisted the urge to grab a piece; I prefer samples from actual outcroppings. (But I did find an outcropping later.) There was also a retaining wall made with a lovely conglomerate from who knows where.

The adult family members went to the Pickleville Playhouse for dinner and entertainment. Both were excellent. I bought a T-shirt for Nathan: 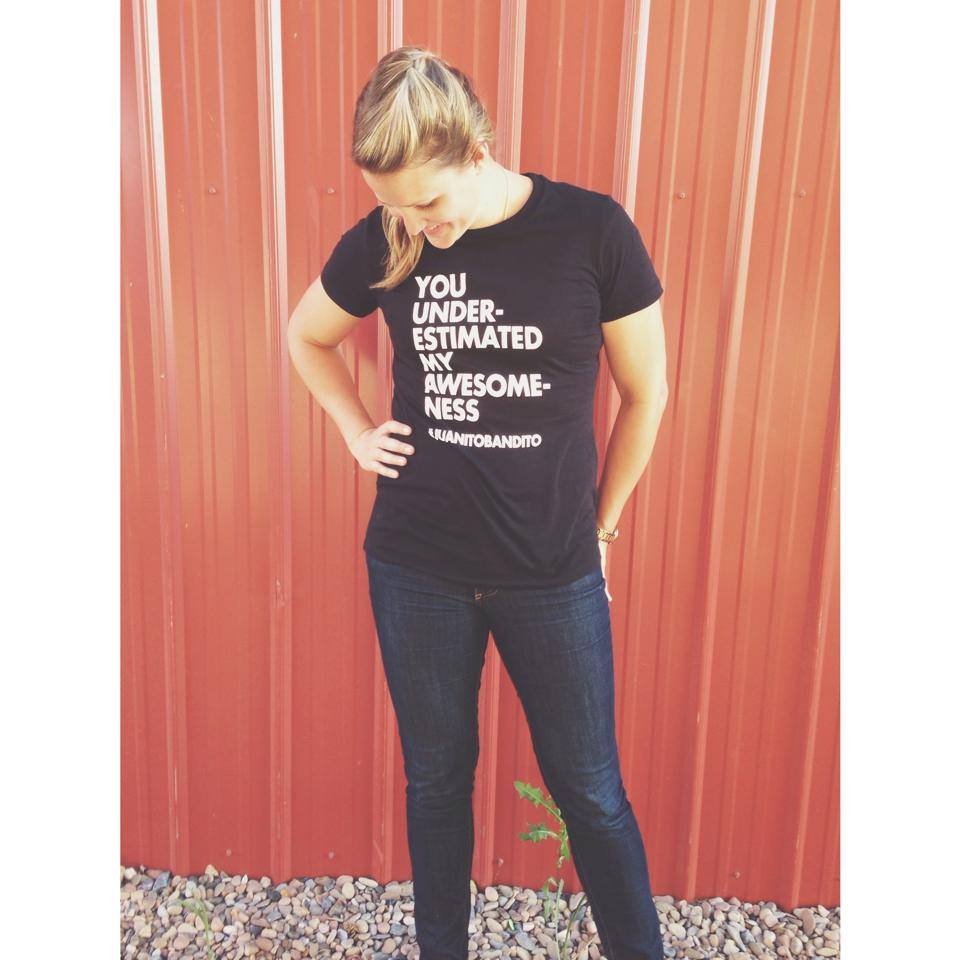 The whole day was spent vegetating at the lake. I brought my binoculars. Tim borrowed these extensively, with my blessing. I got a good look at the horst ranges surrounding the Bear Lake graben. I noticed a spot that looked like, but almost certainly was not, a pegmatite on one mountain; another was capped with a mafic cinder cone of some kind. No opportunity to investigate either further.

Etta, one of Mom’s two great-grandkids, was there. 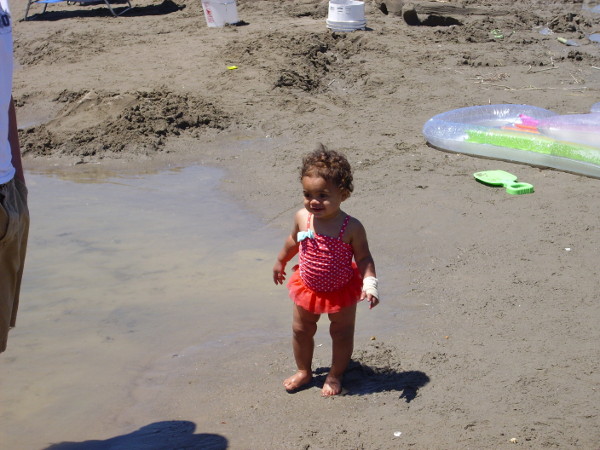 I have never met the other great-grandchild, Tucker (a.k.a. “Tank”), whose parents were settling in to a new home in … Ohio? Iowa? and could not make it to the reunion. It’s a shame. 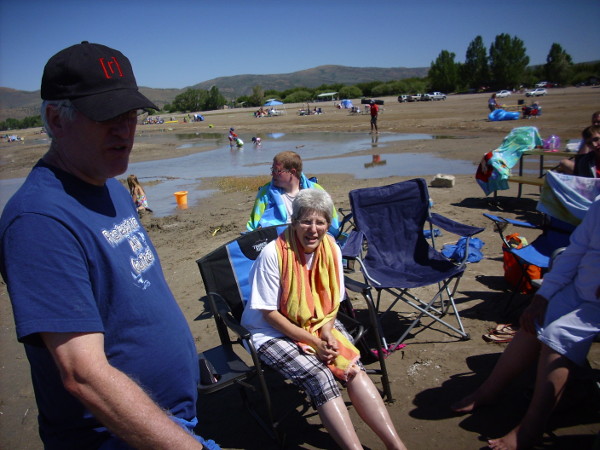 That’s Scott to the left. He really is smiling; it’s just that he’s doing his LaVell Edwards imitation. Lori is seated in the center of the photo, with Susan’s son Dustin roasting in the sun behind her. 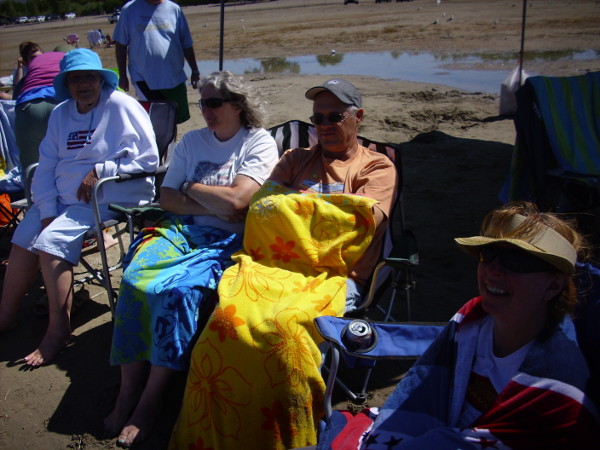 Mom on the left, then Susan and Lowell, with Lisa at the right. I can’t identify the people behind them for sure, but it may be Susan’s son Brian with his head cut off. (You know what I mean.)

Tim is apparently interested in geology, and talked me into a hike along the lake road. We discovered what looks like a quarry. 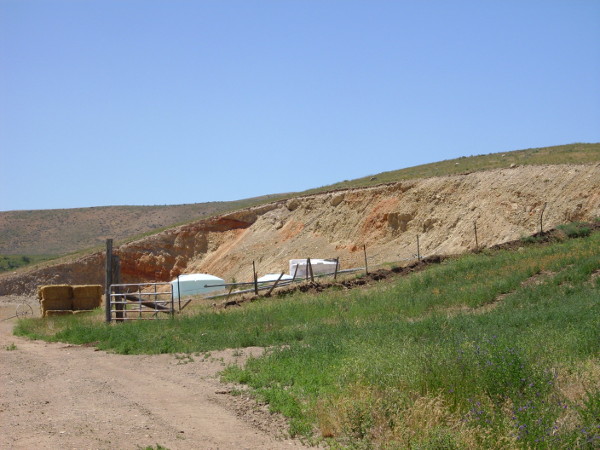 At the time, I thought this might be the quarry that the Bear Lake Tabernacle was constructed from, but the distance is too great, the direction is more south than southeast, and the volume of rock removed seems inadequate. Also, this quarry is clearly now inactive, while the guide at the Tabernacle said that the quarry from which the Tabernacle stone was quarried is still active.

Tim got a lot of entertainment out of signaling passing trucks to toot their horns. With my walking stick and a straw hat borrowed from Scott, I probably looked like Gandalf taking a young hobbit on an adventure. Sorry, no picture.

I stopped on the drive back from the lack to look at the outcroppings on the hills by the lake shore. 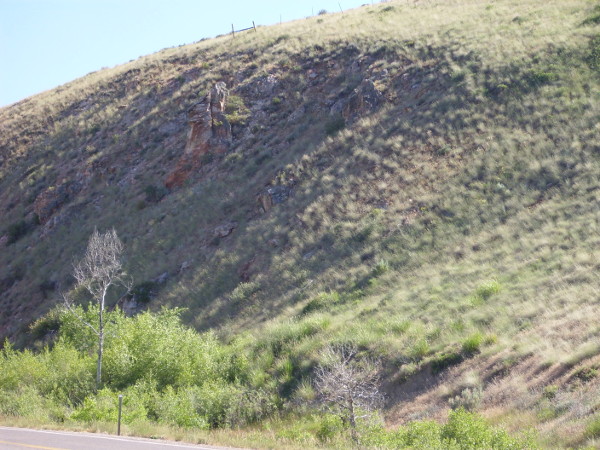 They were composed of the same lovely quartzite being used to pave the roads. 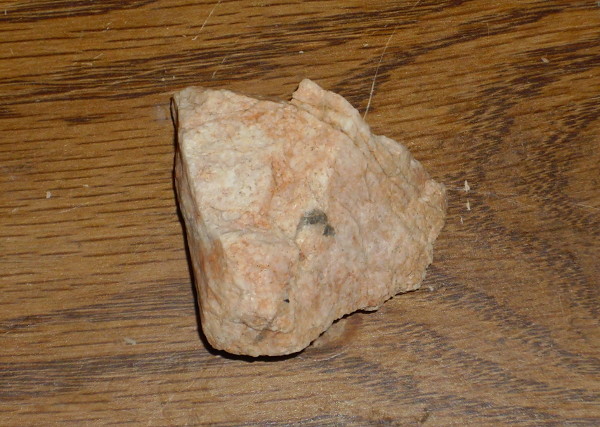 The color varies from palest pink, as here, to a light tan. Beautiful stone. Hard to believe they pave roads with it, but then it’s abundant in these hills. Kind of reminds me of the story of the rich man trying to get into Heaven with a big suitcase: St. Peter asks him what’s in it, and he says “Bars of gold.” St. Peter reviews the Book of Life: “Hmm. It says here you were good to your family, were civic minded in your community, faithfully supported your church, and gave generously to good causes. I guess we can overlook your obsession with paving material.”