I’m an active Mormon, and besides, Bruce and I were both a bit beat up after the last two or three days, so we took it a bit easier this Sunday.

Bruce very kindly helped me locate a Mormon church in the area using Google. Turns out there was one very close to my campsite, meeting at 9:00 AM.

Now, it did not occur to me to take my camera, but perhaps I should have. The Google aerial shows a church with rather a lot of parking area for a Mormon ward building. It turns out there is a good reason for this.

After doing my best to clean up — meaning, basically, a sponge bath and lots of aftershave — I put on what passed for nice clothes and a tie and drove on down, fairly early. The place was already a madhouse when I got there. (As Bruce later commented, a very polite and neighborly madhouse, but a madhouse nonetheless.) There must have been at least a thousand people there, when a normal Mormon ward rarely has more than 250 in attendance. The chapel was full; all three chapel overflow areas were full; the classrooms, which had speakers to pipe in the service, were all full; the hallways were all full; and there were folks out on the sidewalks listening to outside speakers.

And they were overwhelmingly tourists visiting the area, apparently, because the first thing the bishop said when he started the meeting was that this was the special tourist service, consisting only of Sacrament meeting, and the regular service with the full block of meetings (Sacrament, Sunday School, and Priesthood/Relief Society) would be at 11:00. We were all invited to come back if we wished.

It was a fast and testimony meeting (though I didn’t come fasting under the circumstances), a kind of Mormon worship service in which all present are invited to stand if they wish and share their religious convictions. The tourists at this service quite informally adopted what I will call the BYU Protocol, in which everyone first gave his name and place of origin. I call it the BYU Protocol because in most Mormon meetings of this kind, where the ward member all know each other, this isn’t done. I’ve previously only seen it done at BYU, where student wards have lots of new people each semester.

I admit I snuck out a bit early. I wanted to call Bruce and warn him of the ginormous traffic jam I anticipated. Too late, I saw him driving in as I was driving out, and he got caught up in it. (This prompted the remark about very polite madhousedness.) We eventually got untangled from the traffic, I climbed back into my grubby(er) clothes, and we spent most of the rest of the day driving rather than hiking around. We needed the break.

The first stop was Big Springs. This is found at the western foot of the Madison Flow, one of the rhyolite flows that erupted from the ring fracture some time after the last caldera supereruption 640,000 years ago. The flow has a very steep face, since rhyolite is highly viscous as lava. It sits on a layer of Lava Creek Tuff from the caldera eruption, and a very large spring (supposedly one of the largest in North America by volume) emerges from under the rhyolite. I’m guessing the tuff had partially eroded and was covered with gravel and soil when the rhyolite flowed across it, making a superb natural aquifer. 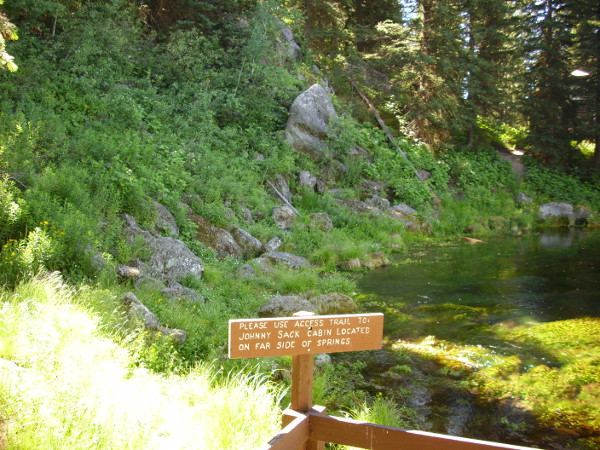 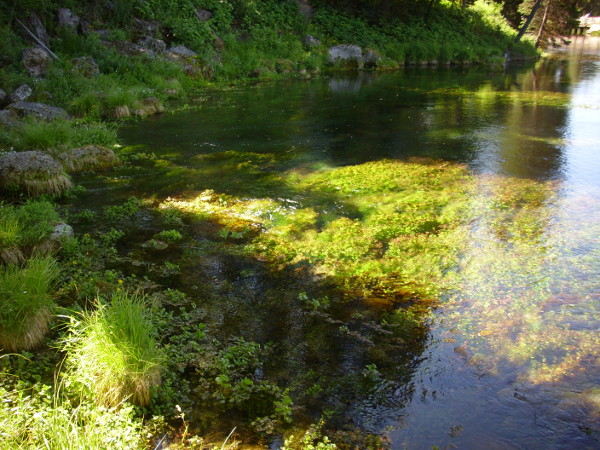 There was wildlife in the area. 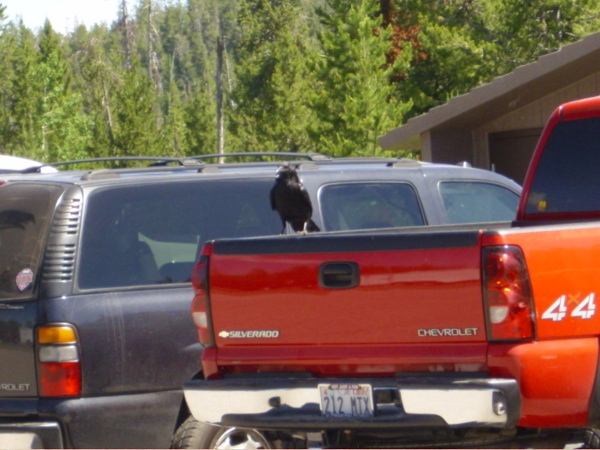 Incidentally, is it just me, or is there a hint of a suspiciously round feature in that area? It’s perfectly flat ground, though.

From there we drove up the highway between Henry’s Lake and Black Mountain. Black Mountain has a nice sequence of Paleozoic sediments deposited unconformably on Precambrian rocks of all kinds. 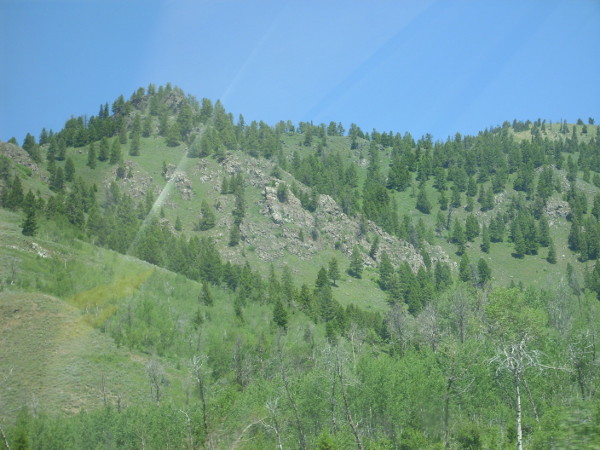 There’s a fault running along the south face of the mountain that exposes a lot of rock debris. We saw what looked a lot like other geologists digging around, figured there must be something interesting, and stopped. I found a wonderful hodgepodge of rocks of various types, impossible to date, and none of the limestone had any obvious fossils. And the “geologists” appeared to be looking at bushes and stuff; biologists?

Regardless. Some pretty rocks:

This is a nice foliated metamorphic rock, almost certainly Precambrian. Probably classifiable as a gneiss, since it does not have that much in the way of flaky minerals, but is too high-grade to be a slate. 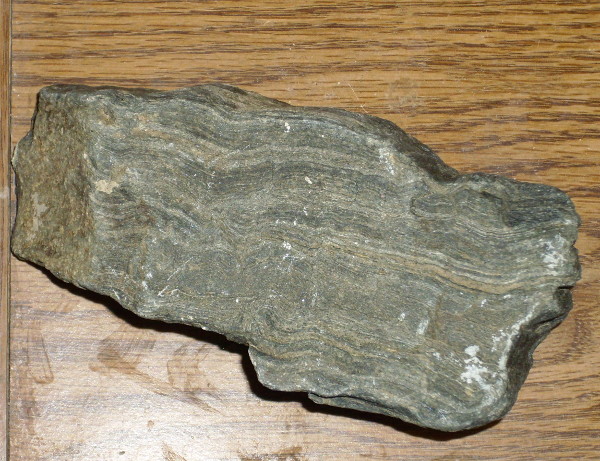 And some nice crystals of … calcite? Fizzes under hydrochloric acid; yep. So this is a dirty marble. 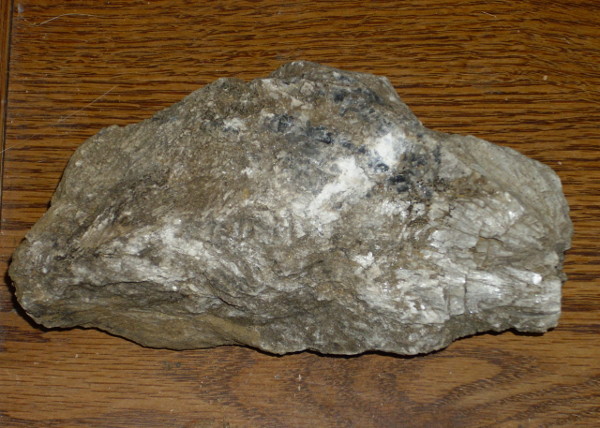 We continued up the road to the Montana border and to the Madison River. Here we see that the mountains have treeless south slopes and tree-covered north slopes. This is similar to the pattern in the high Jemez. However, I’m not sure the cause is the same; in the Jemez it’s a microclimate phenomenon, but here it may well be a fault scarp. 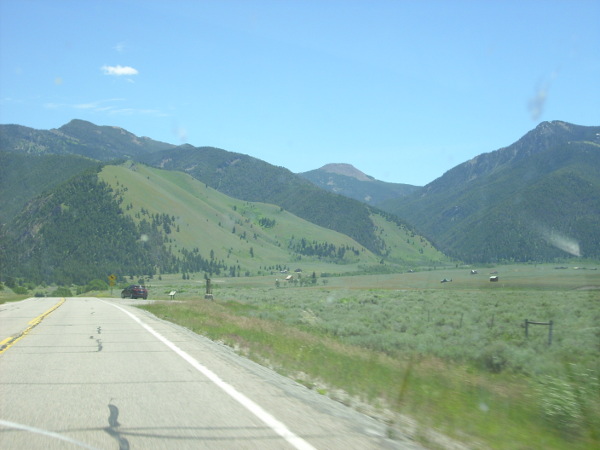 From there to Quake Lake. This was created by the 1959 Hebgen Lake earthquake, the largest recorded in the north Rockies. With a magnitude around 7.4, this quake ruptured several miles of two faults and caused a landslide that killed 28 campers in the valley below. 19 are still buried there under tons of rock.

The slide scar is clearly visible on the mountains south of the lake. 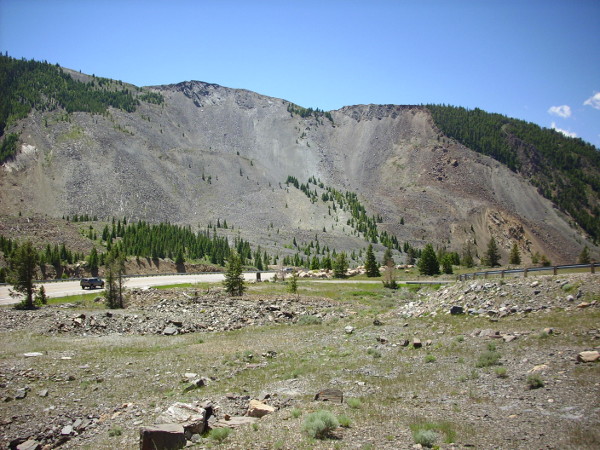 The mountain here is composed mostly of schist, which is a highly foliated rock made mostly of flaky minerals. It has little resistance to sliding along its bedding planes, which here dip to the north — right into the valley. Prior to 1959, the schist was probably weathered and very weak, held in place largely by a buttress of nonfoliated dolomite. The dolomite buttress was shattered by the earthquake, allowing the entire side of the mountain to detach and come down almost in one piece, driving hurricane-force winds before it. The slide ended up on the valley floor and partway up its north side, still mostly in one piece (complete with a few trees), blocking the Madison River and creating Quake Lake.

Here is a closeup of the remains of the dolomite buttress, visible to the right in the picture above. 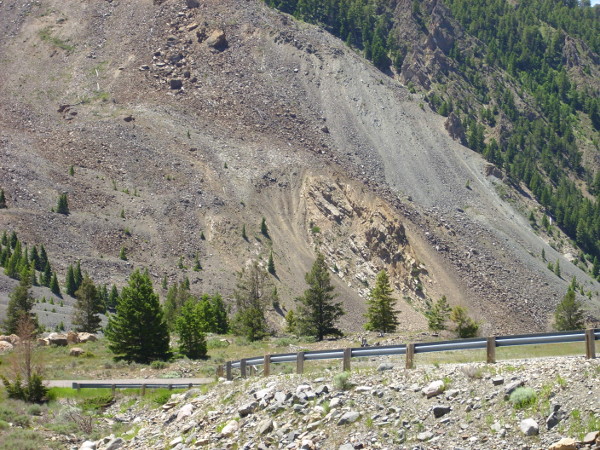 There are a couple of huge dolomite blocks on top of the slide. One has been turned into a memorial. 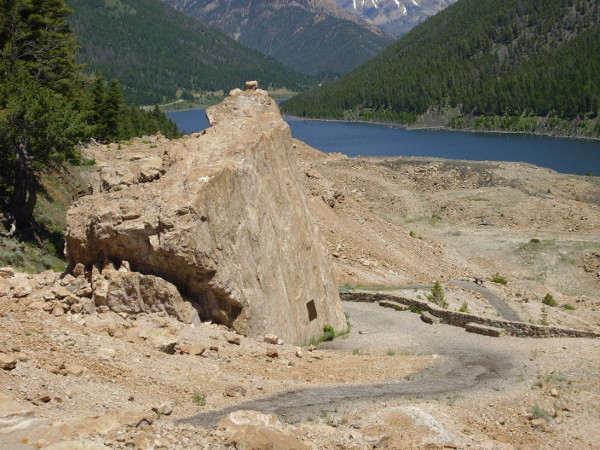 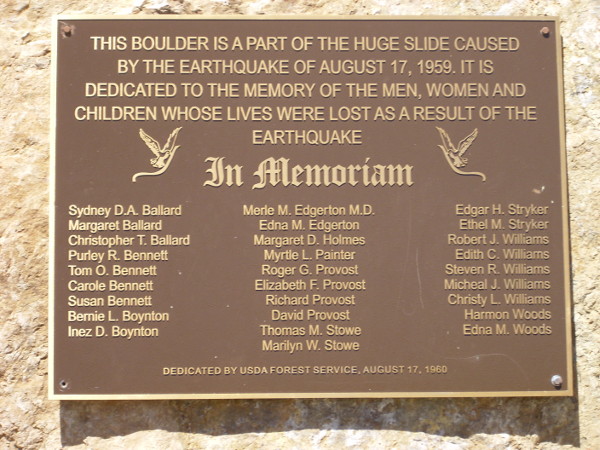 Oh, and I got a sample of the dolomite.  — Of course not from the memorial boulder! What do you think I am? … Don’t answer …

Which I don’t have a picture of, because it appears I left it in Bruce’s car, along with my sample of Central Plateau rhyolite from Big Springs. Maybe Bruce can post a picture for us.

There is a short hike to a lookout point where you can see the new bed of the Madison River below the dam. 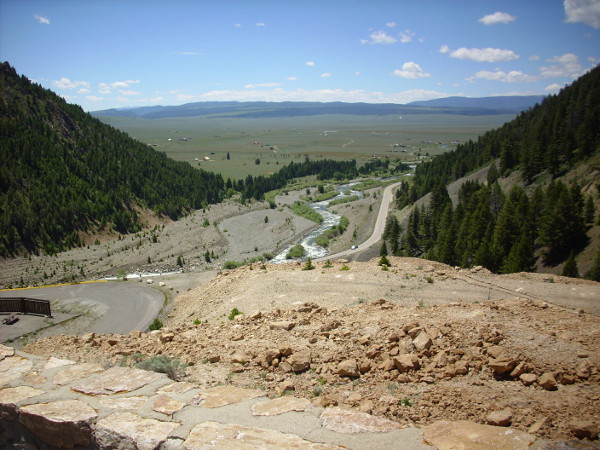 We spent some time in the ranger station. I found a large stuffed toy bison for Cindy. 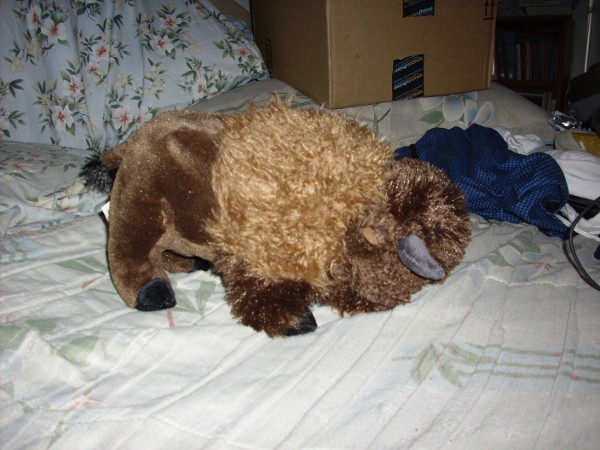 Bruce found a real geologist ranger at the station with whom to argue good-naturedly about Laramide and Sevier origen events and mountain building in this area. Bruce had been much too flattering about my geological knowledge on this trip; it warmed my heart to hear him having a discussion of geology with someone else that was way above my head.

From there we drove east along the lake shore. There are still drowned forests in the lake. 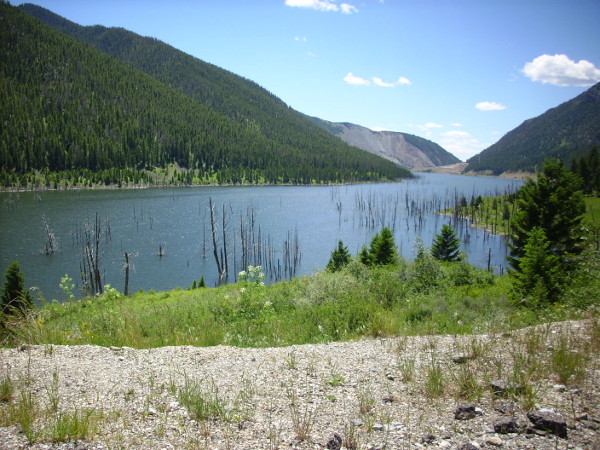 I’m pretty sure I’ve seen this area on film. Probably many of you have as well. Pretty lone and dreary, if you know what I mean.

Based on our road log, we pulled into a campground where the fault scarp is still visible. It was a lovelyl area, with wildflowers: 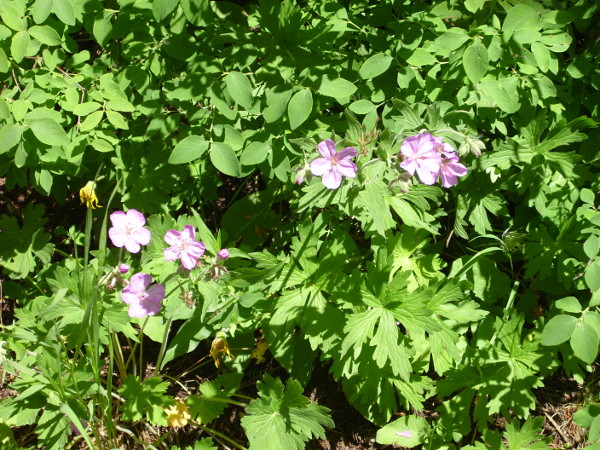 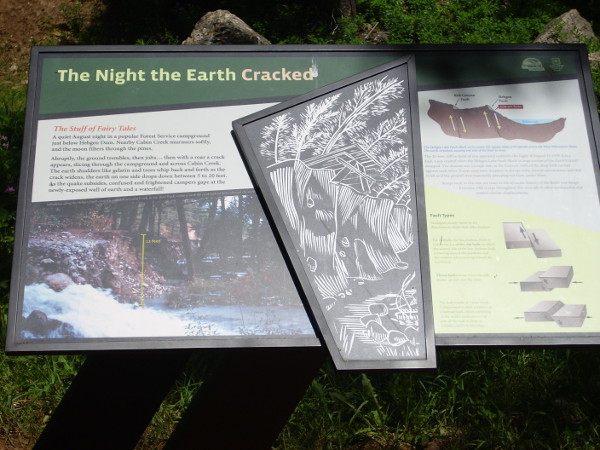 Funny. I didn’t think “fairy tales” was how you spelled “nightmares.”

The fault scarp is still there, all right. Heck, it stands out on Google Maps. This is where the ground ruptured in 1959 and dropped fifteen feet on one side. 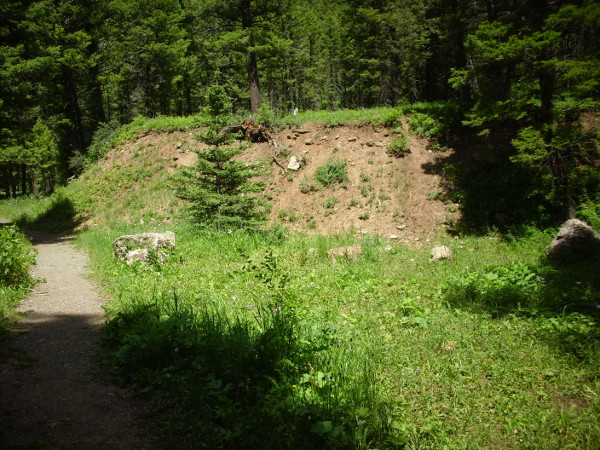 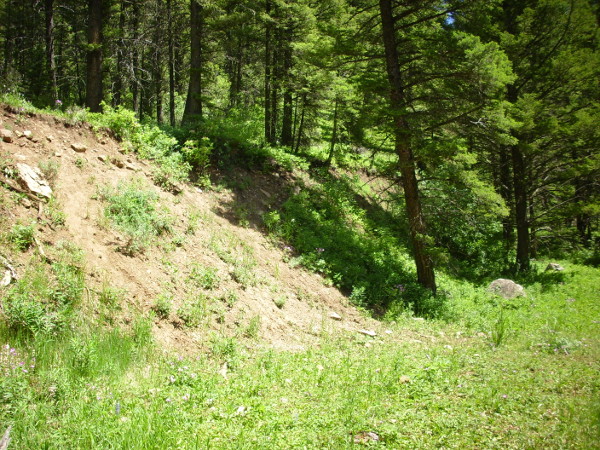 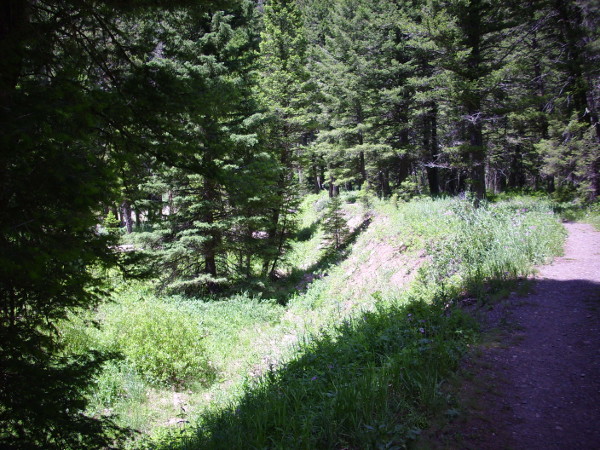 I hiked the short distance to where the stream comes down the canyon. The stream has already cut down through the scarp and found its new bed. 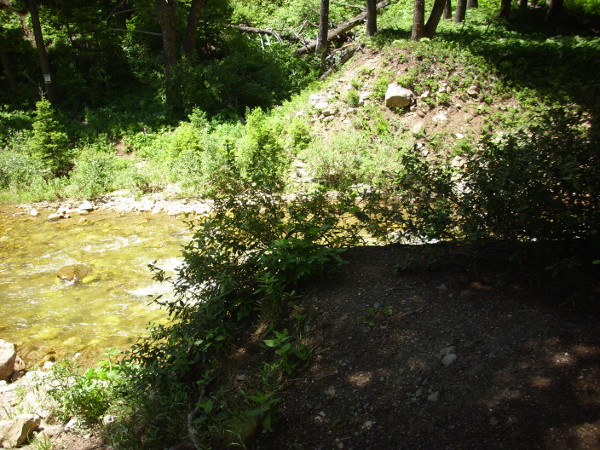 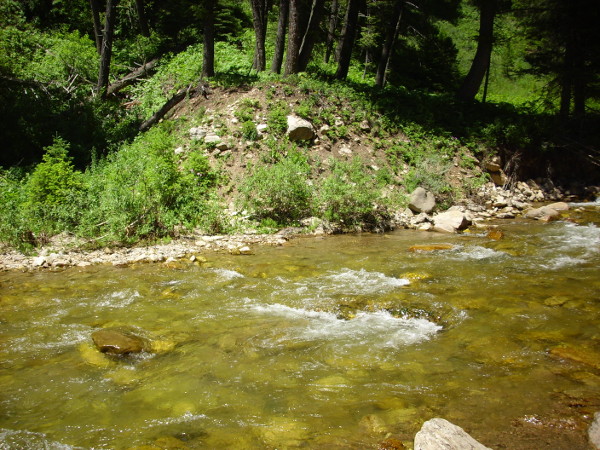 We then discussed what would be the most excellent adventure we could spend the rest of our day on. We settled on driving through the Gallatin Mountains on a forest road to an area that had petrified wood. Fortunately, just before making the crucial turn, we realized that what we were seeing on our map was not a forest road, but a forest trail. No forest road goes through the Gallatin Mountains. Well, shucks and other comments.

We settled on driving to Gardiner and exploring the area just north of the park entrance.

There was wildlife at Mammoth Springs. 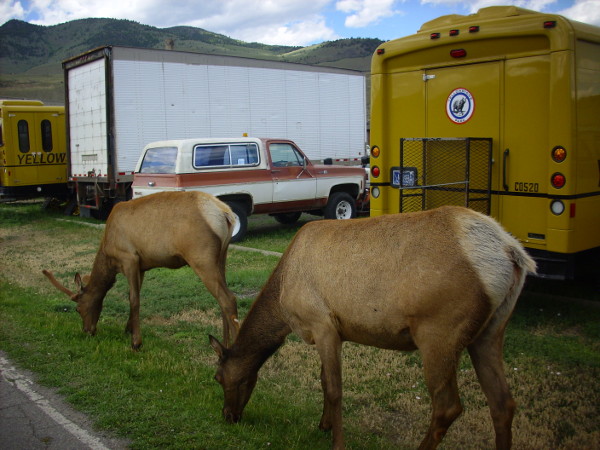 These are too accustomed to the monkey-boys. It reminds me of when my dad took me squirrel hunting one time, and he stepped out of the car to be greeted by a squirrel not ten feet away trilling at him. Dad aimed right between his little beady rodent eyes, where his brain was supposed to be … paused for a long moment … then said “Nah, too easy” and holstered his pistol. Dad was never much for doing Darwin’s work for him.

Sepulcher Mountain, south of Gardiner. It’s an Absaroka formation, formed from volcanoes 50 million years ago. In the foreground are extensive landslide deposits. 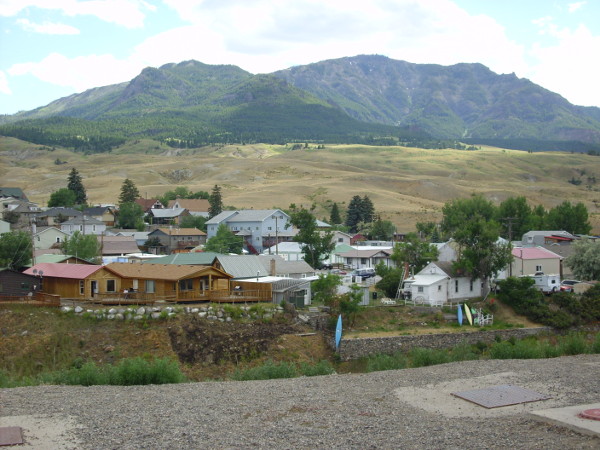 We had earlier passed a stream that had cut into a hillside to reveal the landslide deposits. 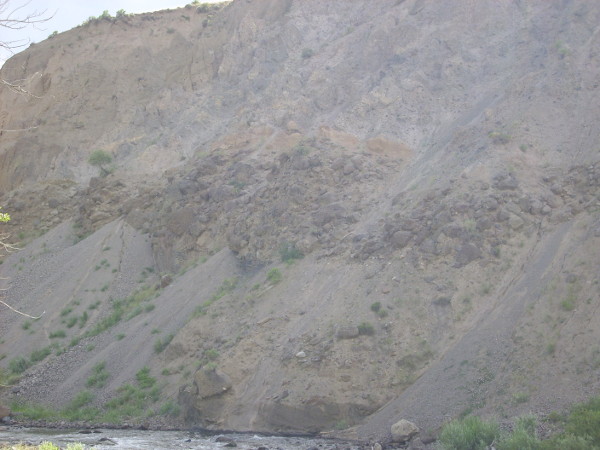 To the west, separated by a fault, is Electric Peak. 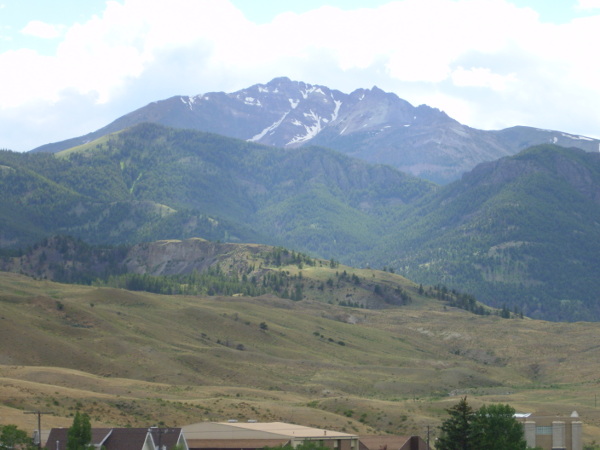 We paused in Gardiner for a pit stop and fresh coffee for Bruce, the latter from a quirky little bookstore/sandwich shop/cafe. Then on to see one last site for the day: Devil’s Slide. 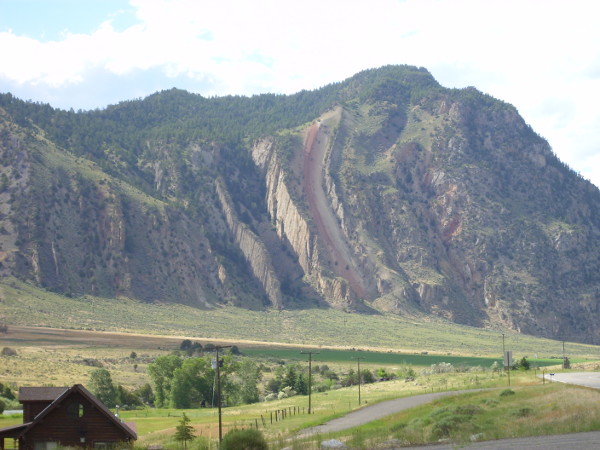 Here the sedimentary beds have been tilted almost on end by tectonic forces. The red “slide” is Chugwater Formation, which becomes much thicker to the east in Wyoming. We’ll see it again later in this series of articles.

Coming back through Yellowstone, we passed the Obsidian Cliffs, which I talked about earlier. The light was not particular good then. This time it seemed much better, and I tried to get some better photographs showing the glassy surface of the cliffs. 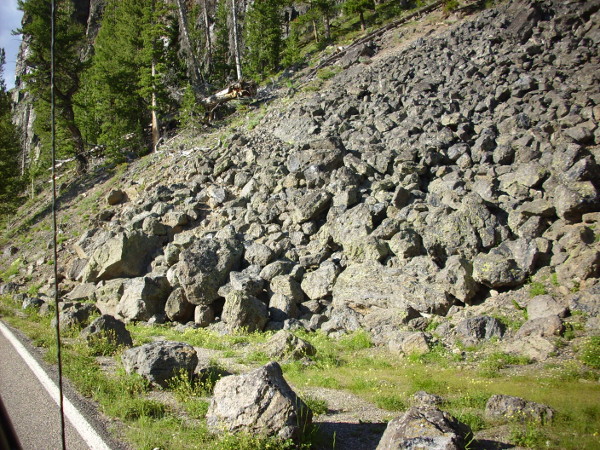 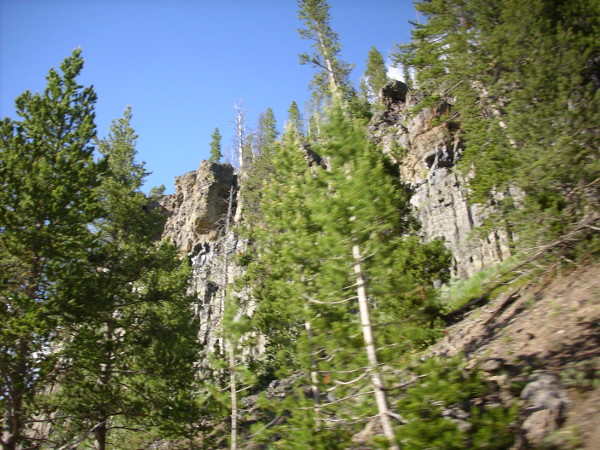 Then back to West Yellowstone, passing some more wildlife. 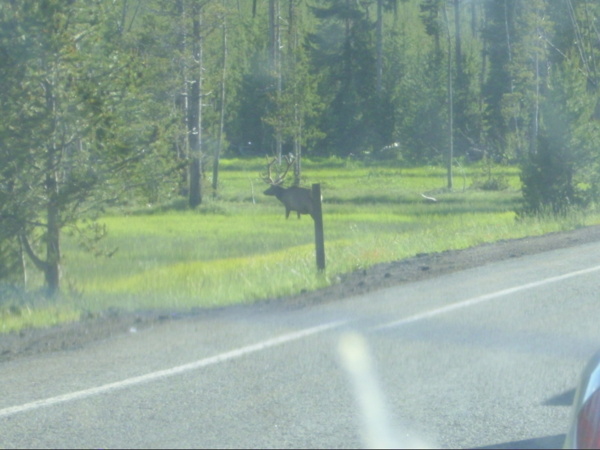 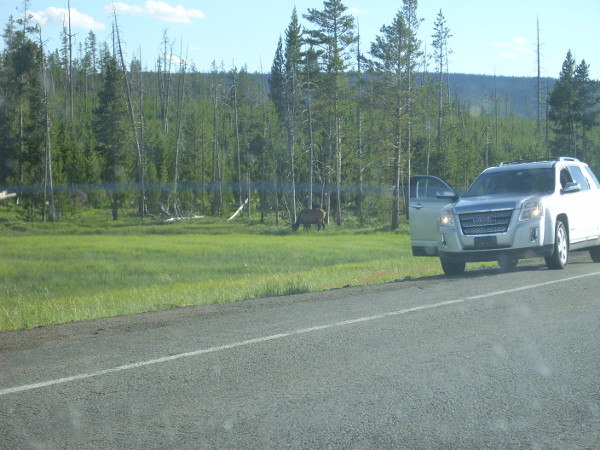 My recollection is that we had another good dinner at Three Bear Lodge using Bruce’s discount coupons. Blackened prime rib; very good.