Got up to find that Robin’s wife was already to work; they are both lawyers, sharing a practice, and having both of them clear their schedules for my visit was not practical. Robin took me to a pretty decent coffee shop for breakfast and then we headed out to the Aurora gun club for some target shooting — something I hadn’t done in years.

I was most interested in hand guns, and Robin brought along four: a 0.22 automatic, a 0.38 automatic, a 0.45 automatic, and a 0.45 revolver. At least, that’s how I remember the calibers — Robin has permission to snicker if I got them mixed up.

Since I had not fired a firearm in years, Robin gave me what amounted to a somewhat sped up version of the beginning shooter lesson, at which I can now attest that he is quite good. To my delight, most of my shots hit the target. Robin praised my “sight picture” or ability properly visualize the sight against the target, which I attribute (half-jokingly) to too many hours spent playing combat flight simulators.  He was generous with his praise for my ability to group the shots, as well:

To be sure, I was shooting from so close to the target I probably could have hit it with a spitball, but I enjoyed the flattery nonetheless.

The 0.22 was just plain fun to shoot; of course, it wouldn’t stop anything larger than an angry Chihuahua. Robin let me fire a second magazine to see how many shots I could get off quickly while still hitting somewhere in the neighborhood of the target. The other guns were a bit more work, but would be better candidates for an actual personal protection weapon to take hiking with me. For a number of reasons, I think that if I ever do get a hand gun, it will probably be a 0.45 revolver. Which I will then have to work at getting proficient with.

No pictures. Didn’t even think to bring the camera.

Lunch was at a pretty decent Mexican place, at least by non-New Mexico standards (there are a few things we are not the most dismal at) then a trip to the Denver Natural History Museum, which I have visited before and enjoyed very much. (I was sad to hear that the Denver aquarium has apparently gone way downhill since my last visit there.) 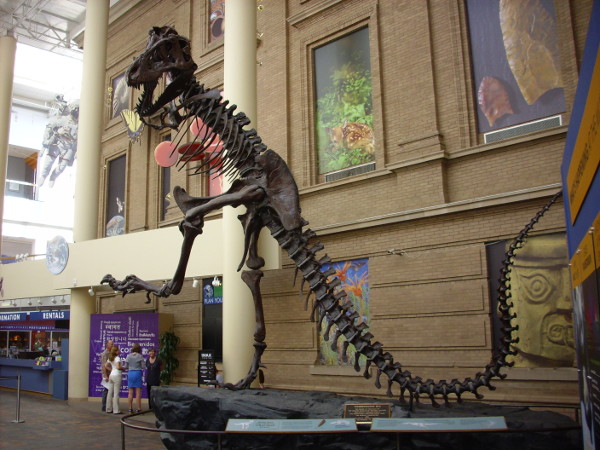 The museum has a wonderful minerals section. This time I took pictures.

There was a ginormous pile of pyrite crystals at the entrance. Note the quarter for scale. 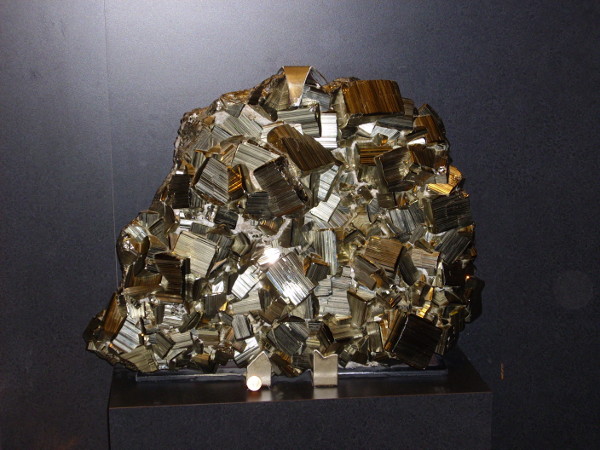 It pains me to admit it, but I’m still not sure if this is a real crystal mass or just a big model.

The other thing is that the minerals collection had rhodochrosite on the brain. It is apparently the Colorado state mineral.

The pride of the minerals collection is the world’s largest rhodochrosite crystal, some six inches across, in a matrix of quartz, calcite, apatite, and fluorite. 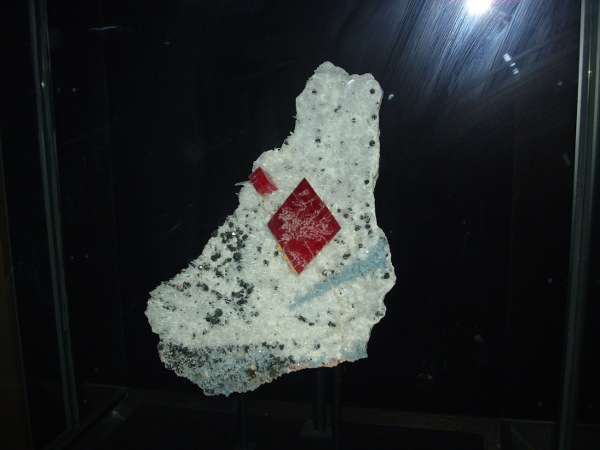 Recreation of a vug (crystal-lined fissure) in a silver mine. With rhodocrosite crystals. 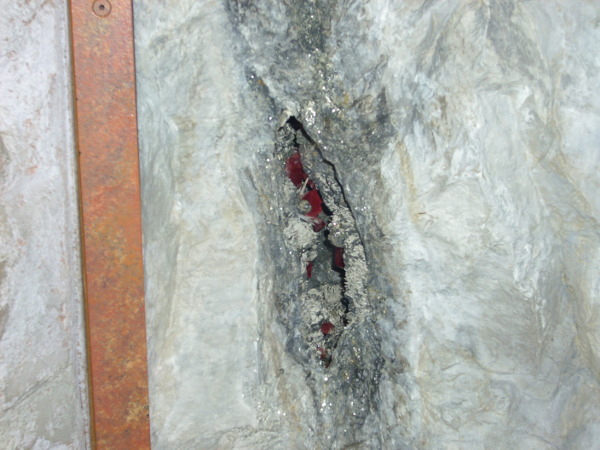 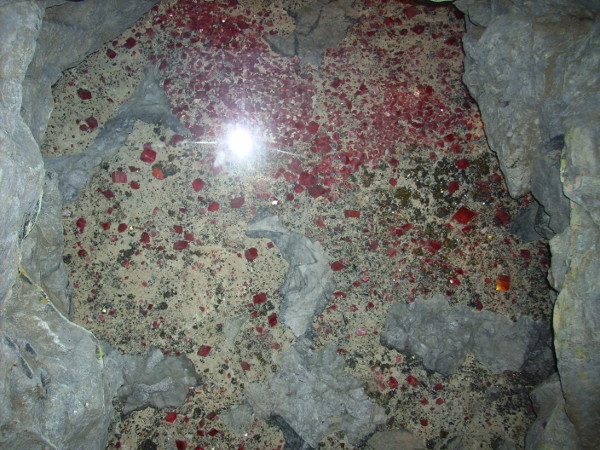 Diorama on how silver mine crystals form. Including rhodocrosite. 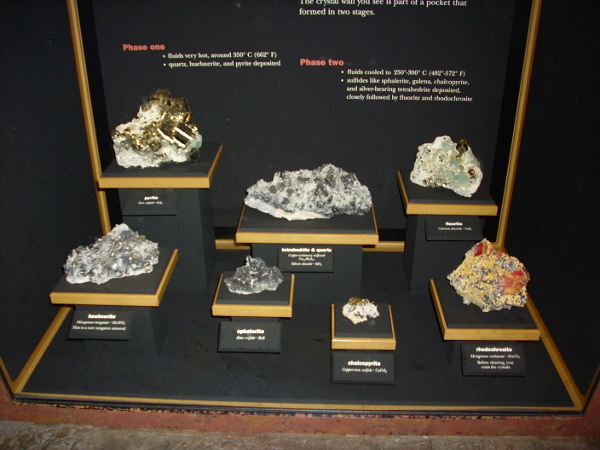 From a section on various chemical families of minerals. Rhodocrosite is manganese carbonate, and like many transition metal compounds, is strongly colored. 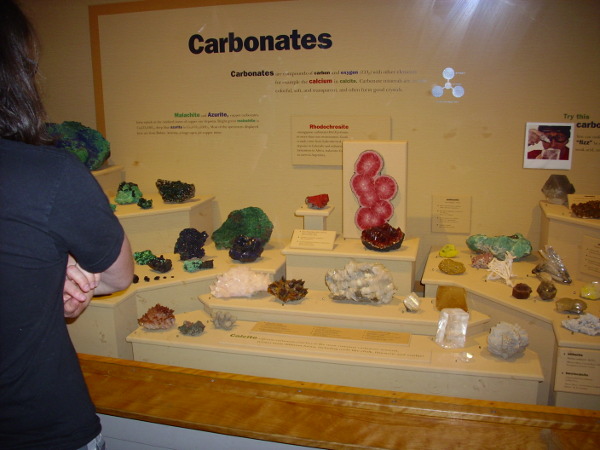 Honestly, I didn’t deliberately pick out the displays with rhodocrosite. It was just everywhere.

Silver ore that does not actually contain rhodocrosite. 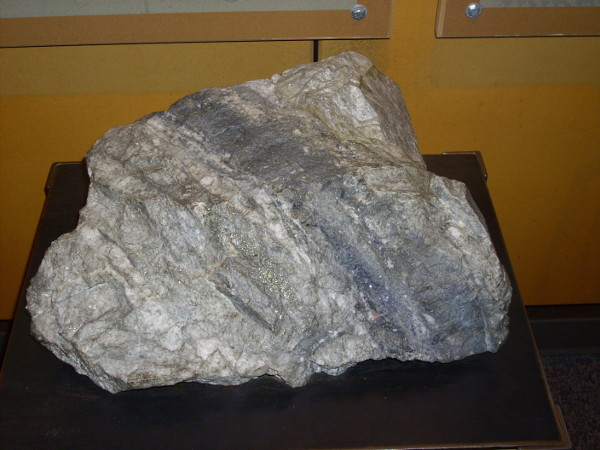 And then an unexpected photography lesson: 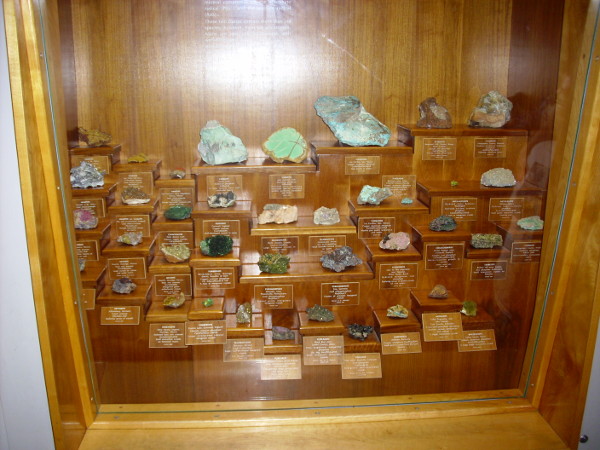 “Excuse me. You know, you don’t really need to use a flash…”

“Trust me; I’m a professional photographer.” 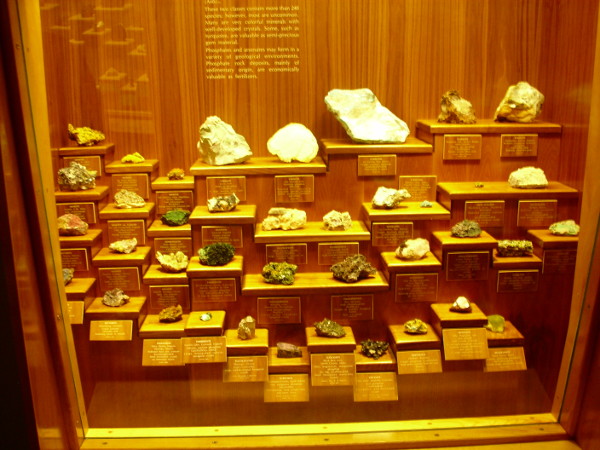 “You also need to use the right light setting on your camera for color balance. Then take a deep breath, hold steady, and …” 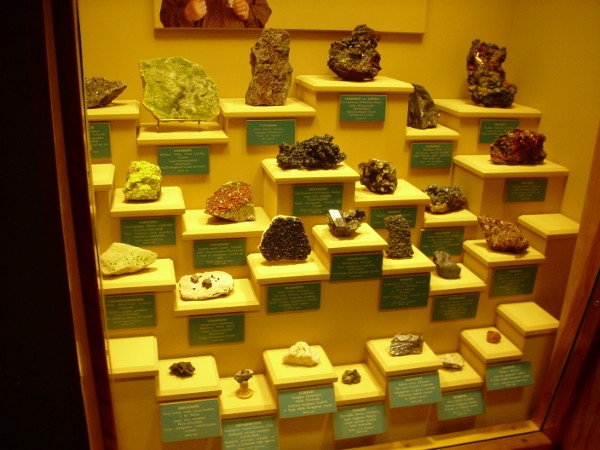 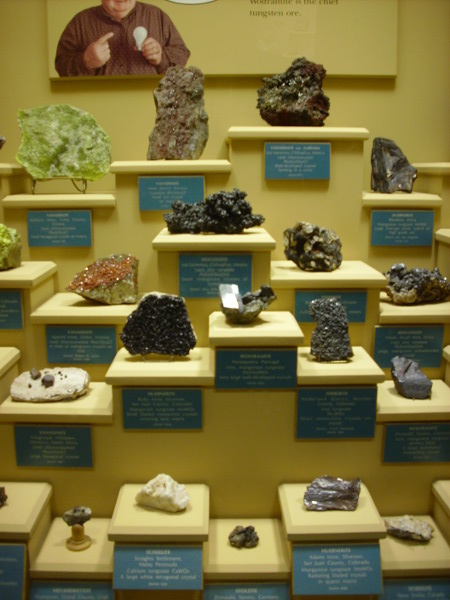 She disappeared back into the crowd. 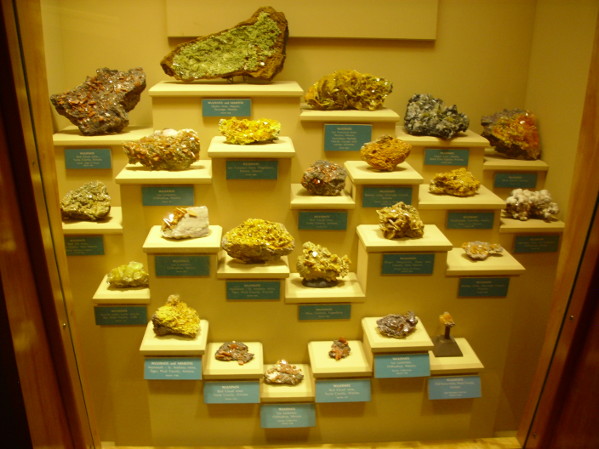 I don’t actually know what this next one is, but it turned out pretty nice. 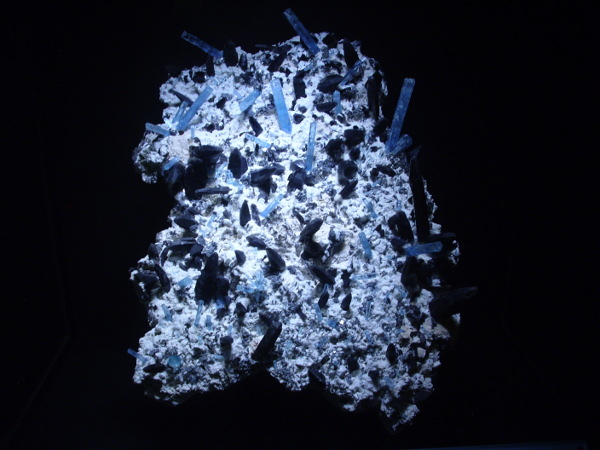 Then off to see the astronomy section. It was highly kid-oriented. There was a model of the Big Dipper in three dimensions, and you had to find the right spot on the floor to see it as the Big Dipper. I found a spot where it looked a lot like the Big Dipper, but was missing one star. I was scratching my head and looking around for it when a museum person kind of grabbed me and said, “Try here” and, so help me, about three flunkies appeared and they all sat me on a stool at the right spot. Yup, there was the full seven-star Dipper. More or less; turns out it would have worked better if I had been four feet tall.

Funny that you could get something looking a lot like the Dipper from completely different spot, except that one star was missing.

We looked at the computer video of stars of various masses evolving. They don’t actually rumble as they accrete matter from a protostellar disk, of course, and I couldn’t resist making a few other snarky observations, but not too bad actually.

Saw the bear, seal, and cat exhibits upstairs. Robin taught me the finer points of distinguishing a mule deer from a white tail deer. I concluded I’ve never seen anything other than a mule deer. About then the museum closed; I would like to have spent longer.

I finally got to meet Mrs. Robin. The three of us had a great conversation over dinner at the local soup and salad. I had actually been a bit nervous about meeting her; I am, after all, Robin’s strange Internet friend, and I worried about how she would react to me. I needn’t have worried. She was wonderfully normal in a very uncommon way, as I told Robin later, and I’ll let you all know when I figure out exactly what I mean by it. She’s a keeper.

Robin reports that she told him I’m not as strange as most of his friends. I’ll take that as a compliment.

Turned in at the end of a wonderful day with wonderful hosts. Zeus would be proud. And two shooting lessons!