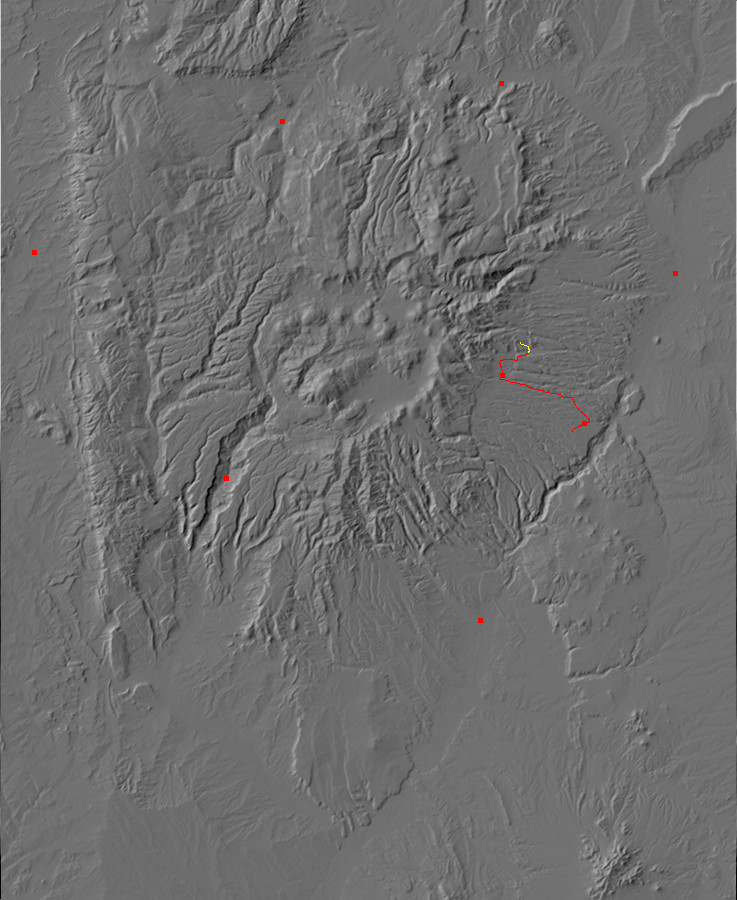 Although the weather was beginning to deteriorate, I had some time, I needed some exercise, and I figured Cabra Canyon would not yet be snowy and muddy from winter weather. I’d scouted the area earlier and it looked like there was a really impressive exposure of the Cerro Toledo Interval in the western spur of the canyon.

So I packed up a few things and headed out. This would not be a long hike so I traveled relatively light, packing a couple of bottles of water, my giant binoculars, camera, GPS, cell phone, geologist’s hammer, and spare sweater into my backpack and tossing the works into Clownie the Wonder Car.

The trail head is located in Rendija Canyon, just before you reach the sportsmen’s club. There’s a small parking area here with some interpretive signage (including discussion of the Army using the area for maneuvers during World War II) and the trail descends across the floor of Rendija Canyon to the north.

On the north side of Rendija Canyon, the trail ascends hills that are mapped as Cerro Toledo Interval. 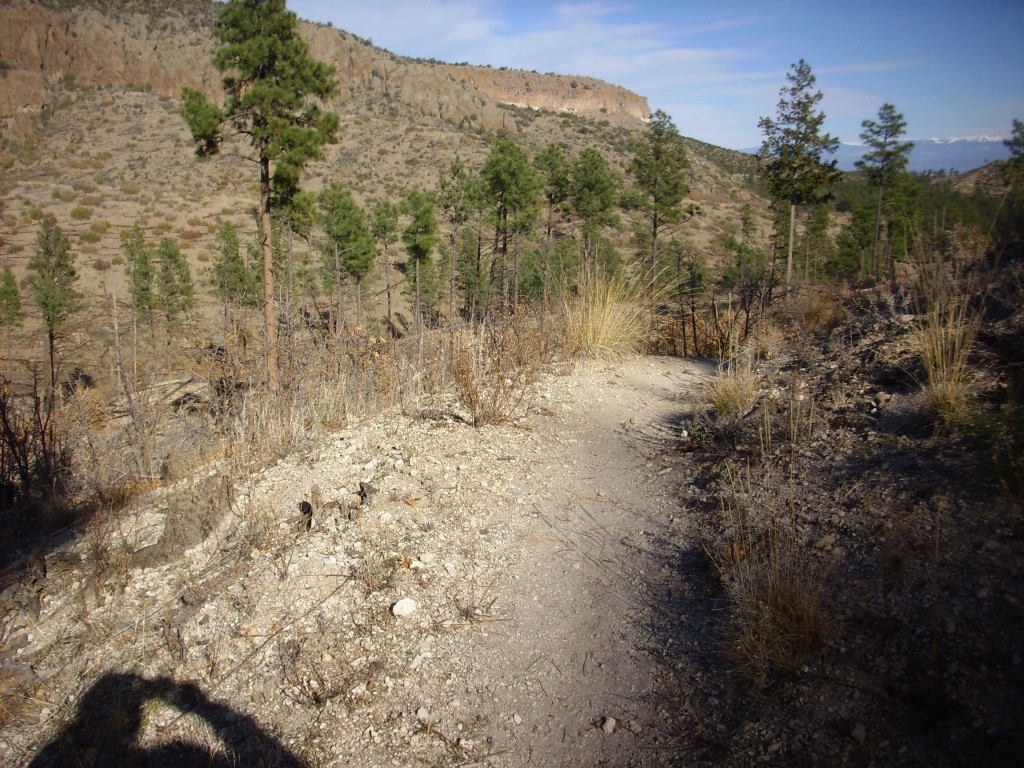 The Cerro Toledo Interval refers to the period between the Toledo event, 1.65 million years ago, and the Valles event, 1.29 million years ago. These events were supervolcano eruptions that emptied the magma chamber beneath the Valles caldera and produced the two members of the Bandelier Tuff. Between the older Otowi Member and the younger Tsherige Member, there is typically a thin layer of pumice and sediments that is referred to as the Cerro Toledo Interval. This layer reaches its maximum thickness north of Los Alamos, in the area I’m hiking today.

The hill crossed by the trail in the photograph is underlain by a mixture of pumice and sediments that is mapped as part of the Cerro Toledo Interval. The pumice likely came from relatively small eruptions in the Cerro Toledo area of the Jemez, which is northwest of this point. You can see clasts of the pumice in the trail bed.

Further along the trail, these become even more striking. 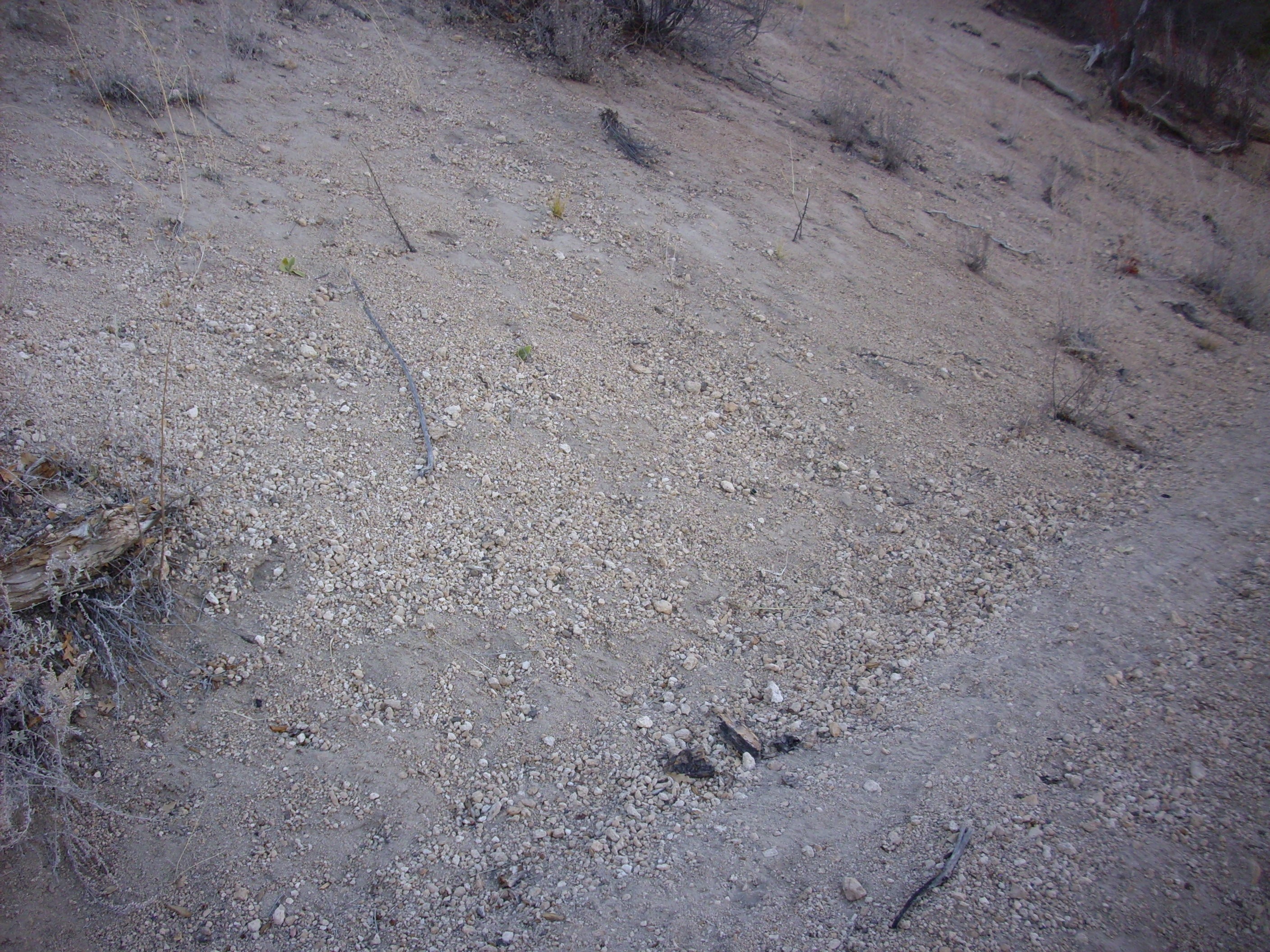 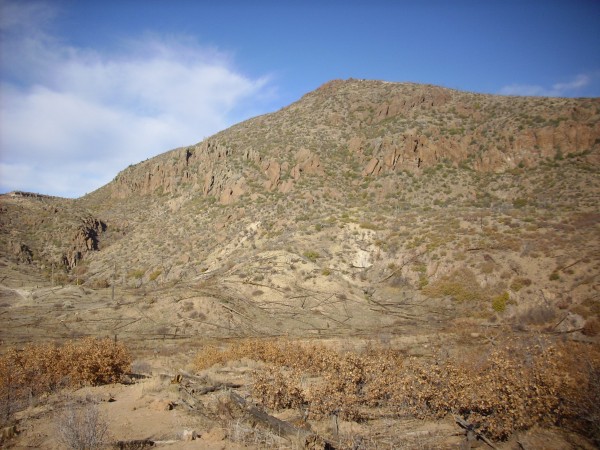 The Guaje Mountain Fault runs along the west side of the mountain and through the notch on the left in the photograph. Further north the fault displaces Guaje Canyon, showing that there is a right lateral component to the displacement along the fault. The Guaje Fault is nearly unique among the faults of the Pajarito Plateau in having a significant lateral slip.

The main trail crosses the saddle near the notch to enter the main part of Cabra Canyon. I’ll hike there another day.  Today, I’m hiking off the trail to the end of the spur of the canyon that lies to the west northwest.

The hike is somewhat strenuous, with plenty of thorny shrubbery to scratch my legs and seed pods to make my socks unpleasant. That seems to be just the nature of bushwacking in the Jemez. However, the hike is not far and the trail soon reaches what may be an old stream terrace. 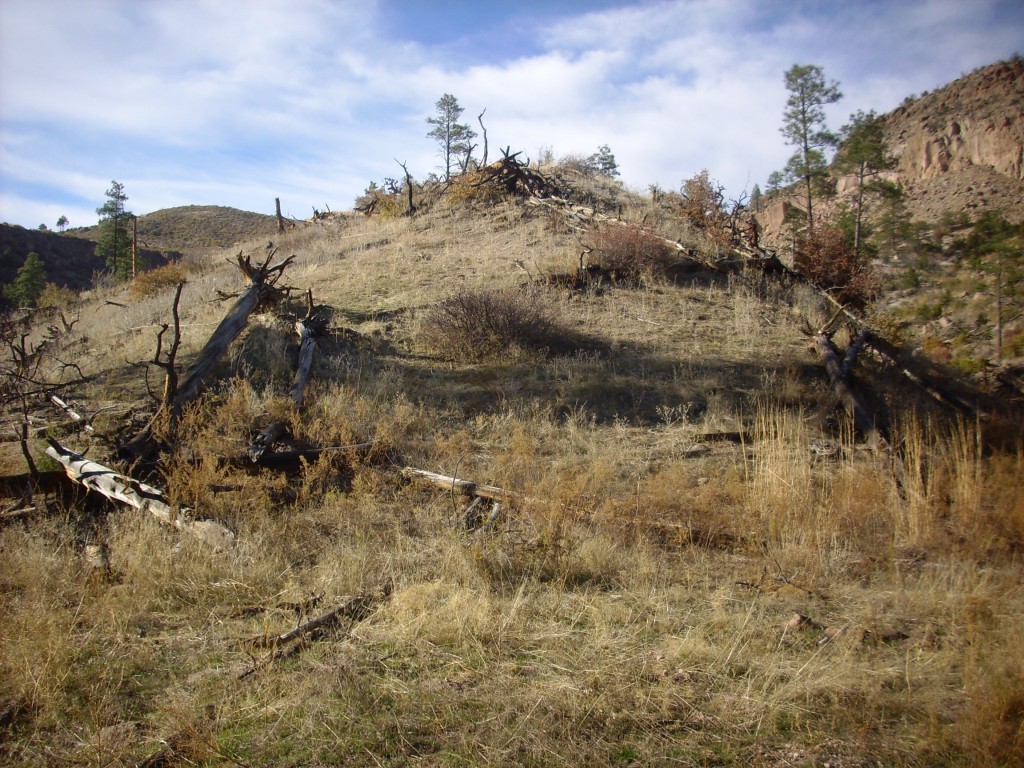 I climbed this to get a better view of the surrounding area, and also in hopes that I would get above most of the shrubbery and weeds. The mount turns out to be mostly Cerro Toledo pumice. 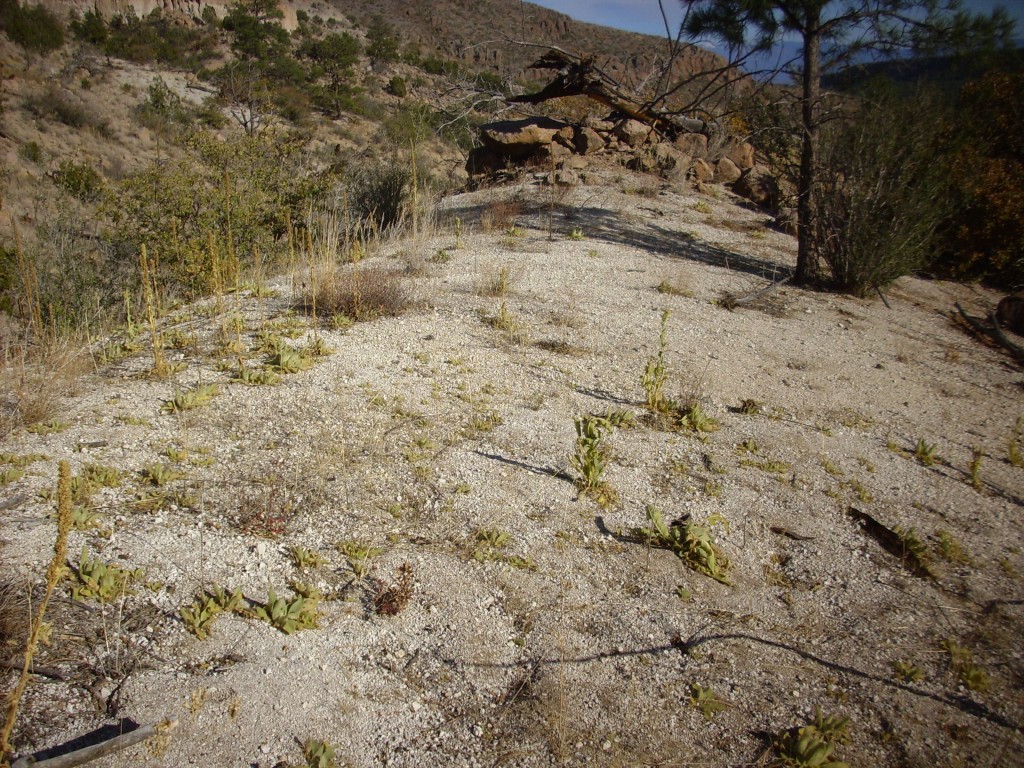 To the northwest, the Cerro Toledo Interval is beautifully exposed. This is probably the best exposure I’ve ever found. 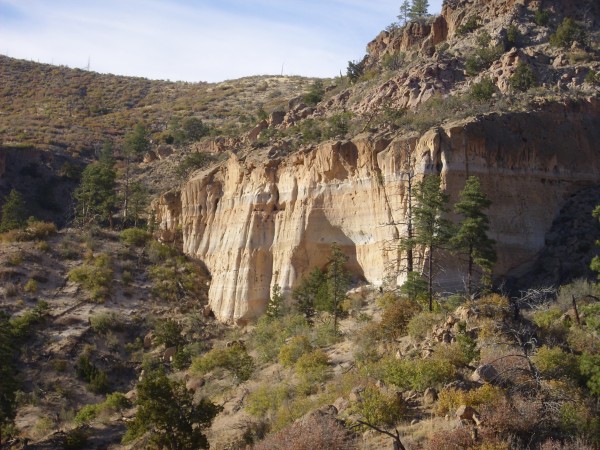 The uppermost half of the mesa is Tsherige Member, Bandelier Tuff, with a base of light Tsankawi Pumice. Below this are a mixture of pumice, tuff, fluvial sediment, and paleosoil beds of the Cerro Toledo Interval. These appear to have accumulated in a paleovalley in the underlying Puye Formation; there is no Otowi Member of the Bandelier Tuff mapped anywhere in this area.

The next photograph show the east face of this exposure. 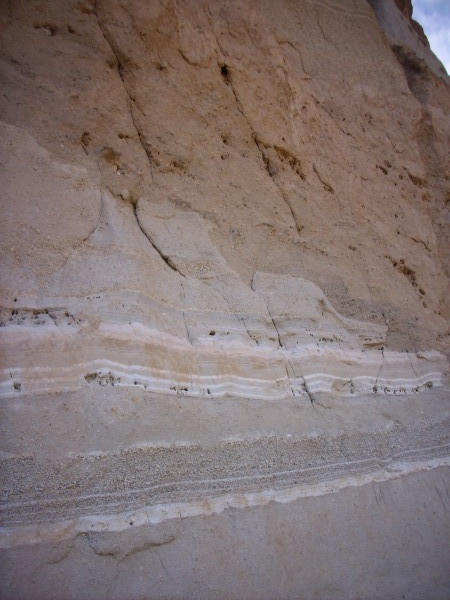 There are a great variety of deposits here: a pumice-rich bed at bottom, followed by thin alternating ash-rich and pumice-rich beds likely reworked by streams, then a thicker pumice bed that is obviously eroded along its contact with a thick paleosol, then another pumice-rich bed at the very top of the photograph above the thick paleosol. A paleosol is an ancient layer of soil that has been well-preserved; here’s a closer view. 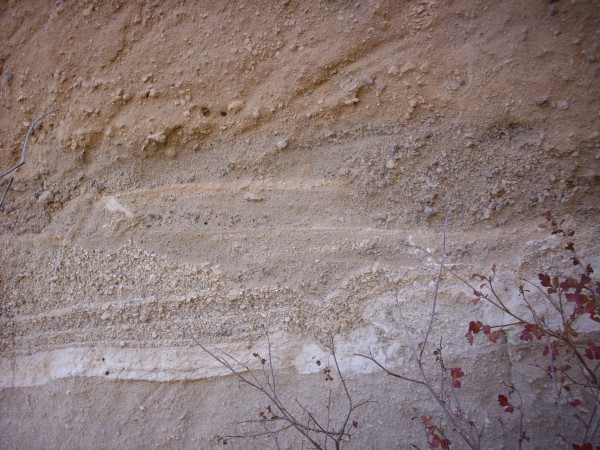 There is a mixture of pumice and clasts of Tschicoma Formation dacite at the base of the paleosol, which strongly resembles the alluvium in modern drainage channels in this area. This transitions to a thick clay-rich bed with fewer clasts.

On the south side of the exposure, there is a cave eroded deeply into the paleosol layer. 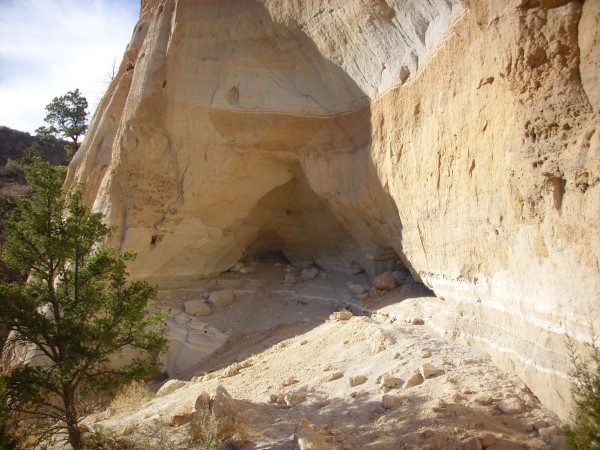 The paleosol layer is particular susceptible to erosion, being very poorly cemented. There are similar caves in the cliffs on the north side of  Pueblo Canyon north of the Los Alamos airport. Although the ancient peoples of the Pajarito Plateau carved artificial caves into the Bandelier Tuff, it is likely that these caves are natural features.

Here’s a closer view of the area below the cave. 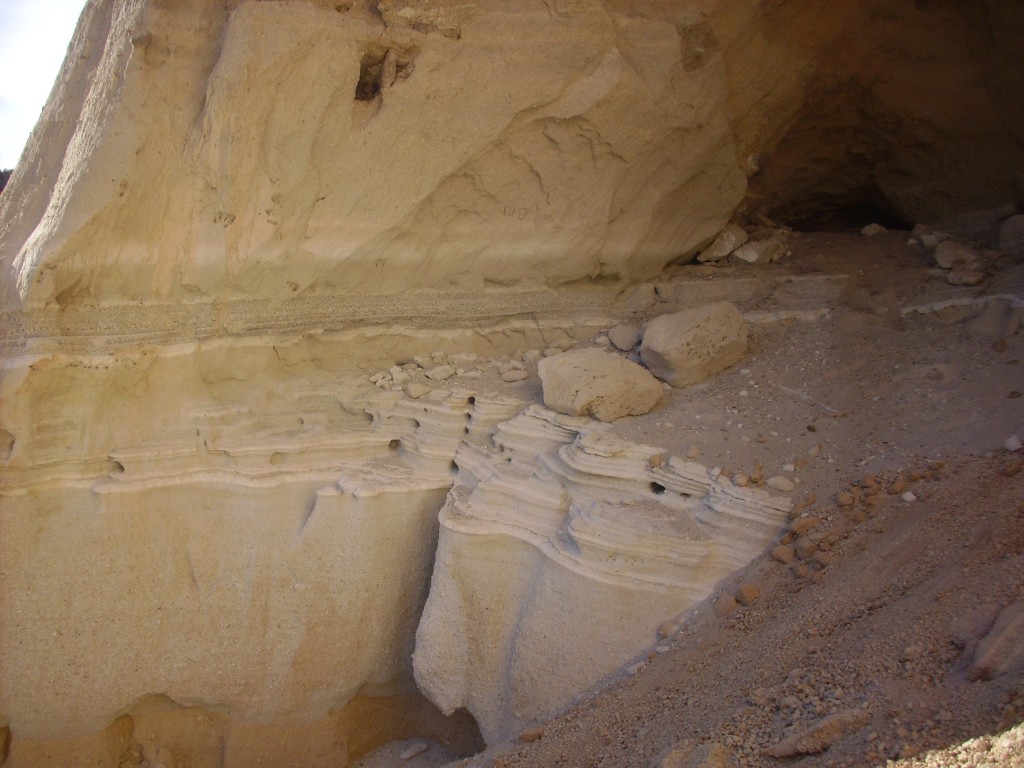 This area is littered with fragments of rock from the cliff face. These include ash-rich layers, now altered to clay: 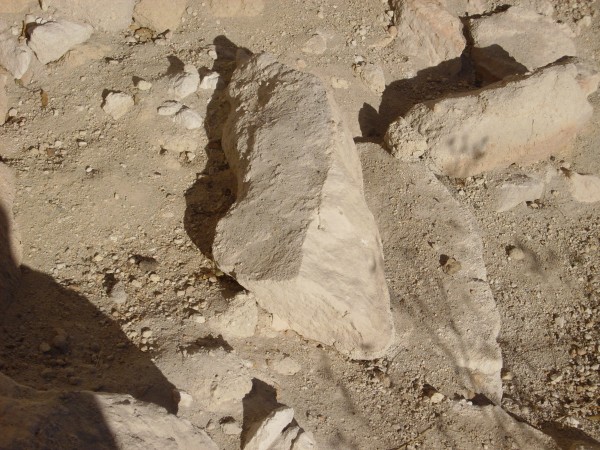 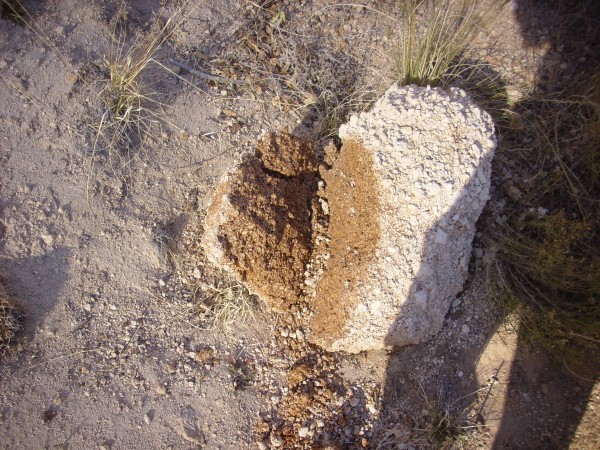 Note the reddish color on the freshly fractured surface. This has the appearance of hematite cement rather than clay, and it may represent mafic minerals in the pumice that have been oxidized.

I turned and started back, this time following the canyon bottom more closely. There was less scrub and weeds here, but the ground was rather spongy and I occasionally sank up to my ankles: This area was burned over rather badly by the Las Conchas fire.