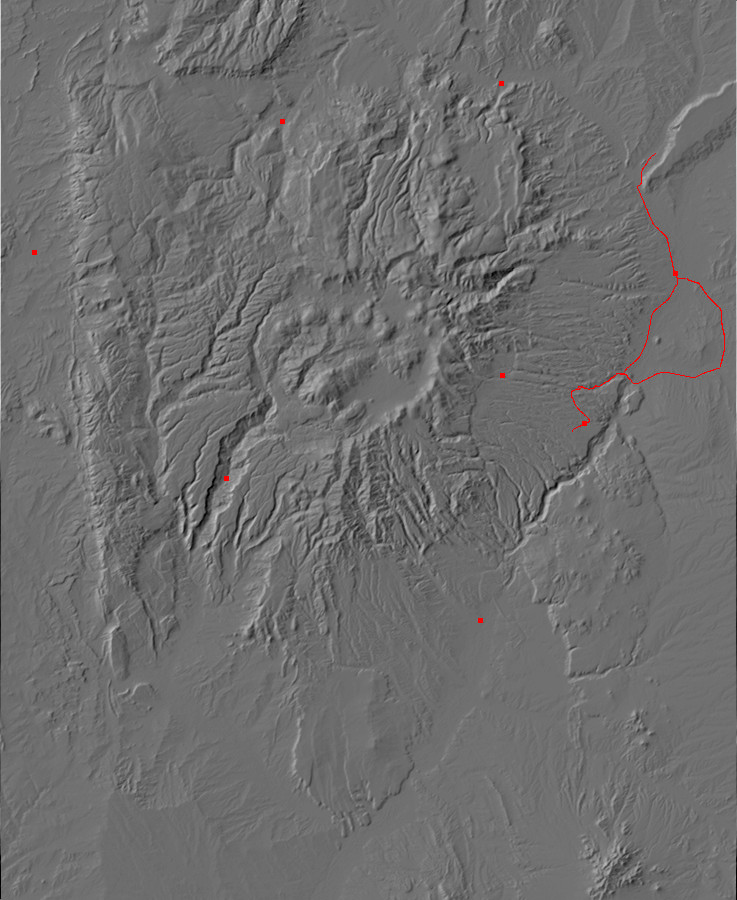 I hate to do it. That little car and I have been through a lot together. But it’s time.

Last Saturday I took Clownie down to Pojoaque for a turn at the Jiffy-Lube. I hadn’t had the oil changed in a while and it was due. Naturally I took the camera and GPS along in case I found something worth photographing.

Which was probably not this (map): 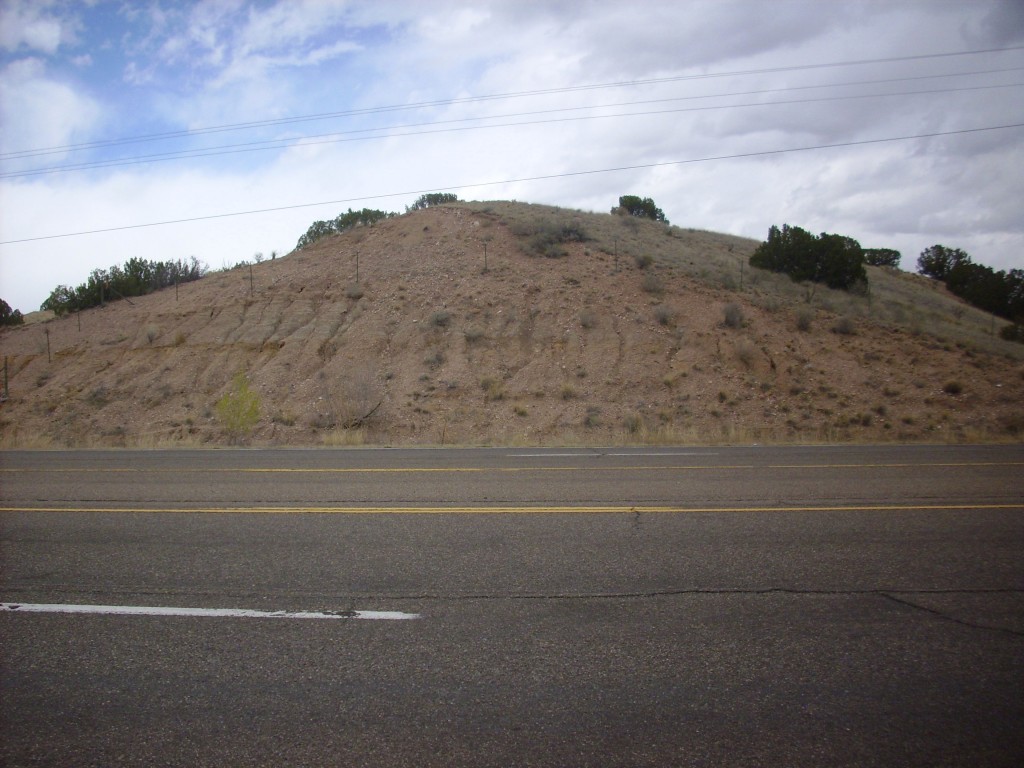 I took this picture, though, because the area is mapped as terrace gravels and, by golly, it actually looks like terrace gravels. These are remnants of a time in the geologically recent past when the Pojoaque River was more than a muddy arroyo and had an actual flood plain. We’re living in a hot, dry spell in the Quaternary, between glaciations.

But it turns out I already have tons of pictures of terrace gravels for the book and didn’t really need any more.

So as I drove into the Jiffy-Lube, the manager kind of sniffed and said he smelled antifreeze. “Well, we’ll look into it.” Which they apparently didn’t; when the minion went over all the things they would like to charge me to do to the car, radiator fluid didn’t come up, and I didn’t think anything more about it.

Instead, I took Clownie up the highway to Espanola, hoping to get a few photographs of some Santa Fe Group features. First was an ash bed in the Skull Ridge Member  (map). 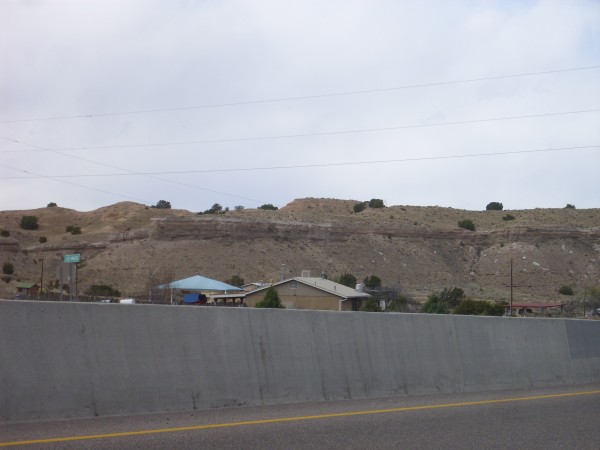 The ash bed is the white layer at the top of the cliff. It’s a bed rich in volcanic ash, which gives it its light color. Geologists care about such things because (a) ash beds often extend for many miles and act as marker beds to help correlate formations in different areas; and (b)  the volcanic ash contains crystals than can (sometimes) be radiologically dated, so that the bed gives you a chronological marker. This ash bed is known as the 285 Road Ash; guess which highway I’m taking this picture from! It has been dated to 15.1 million years old, which is older than the Jemez volcanic field, and its precise source is unknown.

Skull Ridge Member: More precisely, Skull Ridge Member, Lithosome A, Tesuque Formation, Santa Fe Group. Geological formations get named after nearby geographical features, but while I recognize the location names in the Pojoaque Member, the Nambe Member, the Cuertales Member, and so on, I have no idea where Skull Ridge is. I have a sneaking suspicion some geologists bent the rules slightly, naming a favorite fossil quarry Skull Ridge and then naming the formation after the fossil quarry. Still, cool name.

The Skull Ridge Member is notable for the large number of ash beds it contains.

A little further up the road (map) I came across the best road cut in the Tesuque Formation I’ve seen in the Espanola valley. 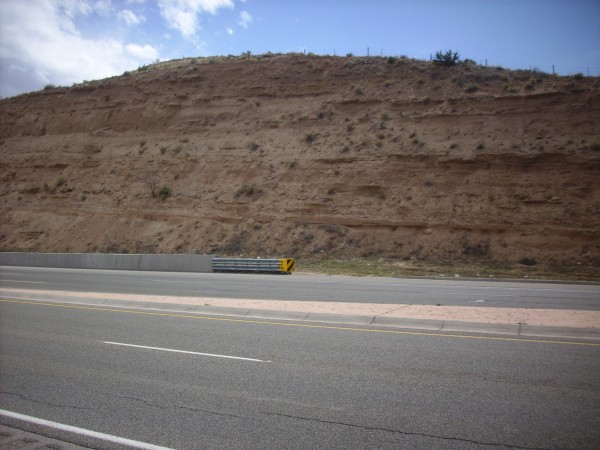 The Santa Fe Group includes all the formations that are rift fill sediment in the Rio Grande Rift, the great rift in the Earth’s crust down which the Rio Grande runs. This extends from central Colorado down to around El Paso, where it gets kind of lost in the extensive rifting of the Basin and Range Province. The Tesuque Formation is the most extensive Santa Fe Group formation in the Santa Fe and Espanola area. It has been further divided both by the sources of the sediments (Lithosome A, off the Sangre de Cristo Mountains to the east, and Lithosome B, from the Penasco area to the north) and by age (the various members, such as the Pojoaque Member) as determined by fossil discoveries. The age divisions can be tough to tell apart just by looking, since they’re determined by fossil content, while the lithosomes are subtly different in color; Lithosome A tends to be a bit more reddish in color and Lithosome B more tan. If it all looks like brown dirt to you, well, it kind of does to me, too.

And right next door is more terrace gravel (sigh). 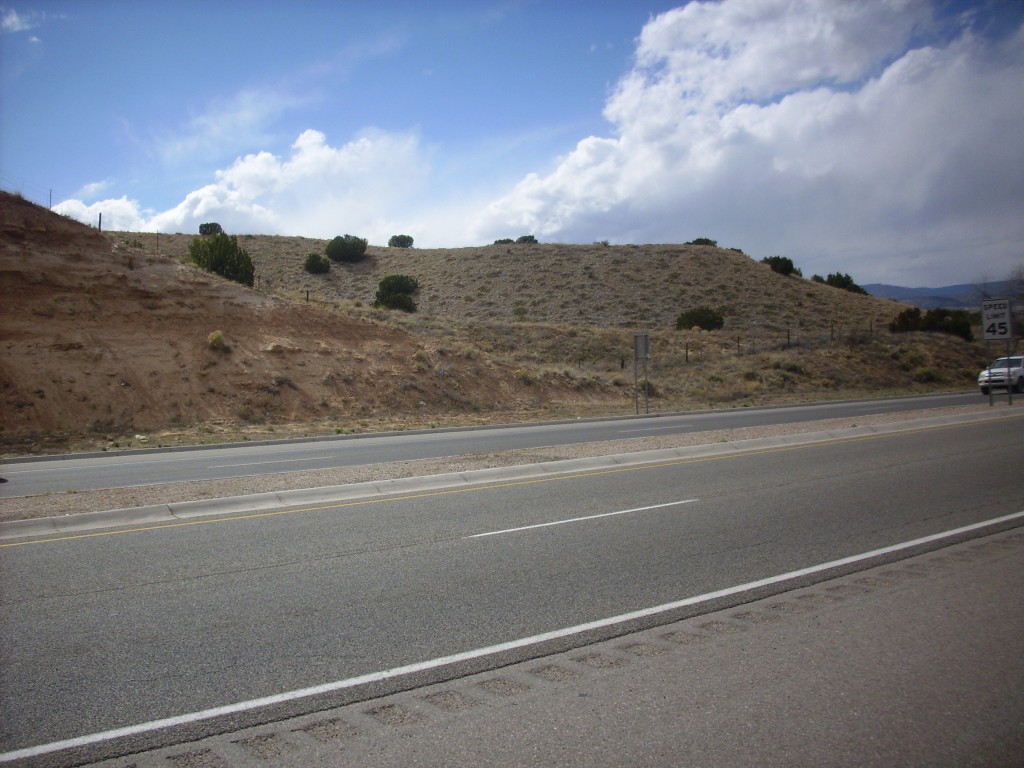 This is from the ancestral Santa Cruz River, which at least has some water in it today but had more in the cooler, wetter past.

I headed on through Espanola and towards Black Mesa. The big Black Mesa, north of Espanola; there’s another Black Mesa south of Espanola, as we’ll see presently. Black Mesa is capped by a large basalt flow, about 3 million years old, that protected the sediments beneath from erosion. These sedimens belong to two different formations: Tesuque Formation (Ojo Caliente Member) and Chamita Formation.

The trouble is that the side of the mesa is covered with chunks of black basalt weathered from the cap. You have to find a spot where a landslide or other recent erosion has stripped this cover away and exposed the beds. Fortunately, there’s such a spot on the west end of the mesa (map). 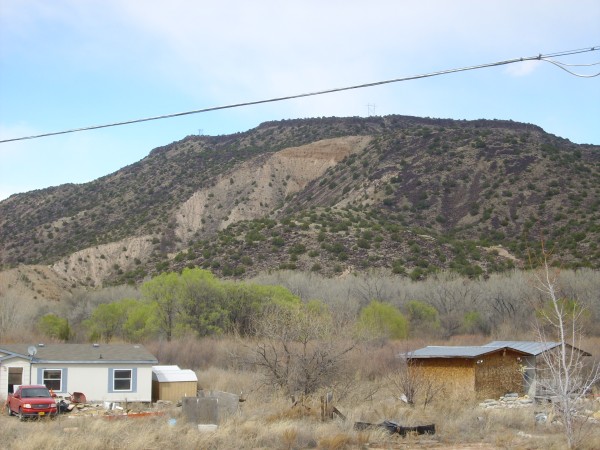 The lighter tan beds making up the lower two-thirds of the mesa are Ojo Caliente Member, Tesuque Formation. The Ojo Caliente Member is about the only member of the Tesuque Formation that I can usually pick out from the others; it is very poorly cemented sandstone that was originally deposited as a field of sand dunes, 5 to 10 million years ago. This makes it noticeably different from the other members, which were all deposited by rivers or lakes.

The uppermost part of the mesa is Chamita Formation, and is noticeably darker and redder. The contact is pretty distinct. Chamita Formation is like the Tesuque Formation, only different. 🙂 Okay, it’s younger and distinctive enough that the geologists mapping the area define it as a separate formation. Or most do; one group haughtily insists that it’s really just another member of the Tesuque Formation. I doubt the dirt actually cares what we call it. 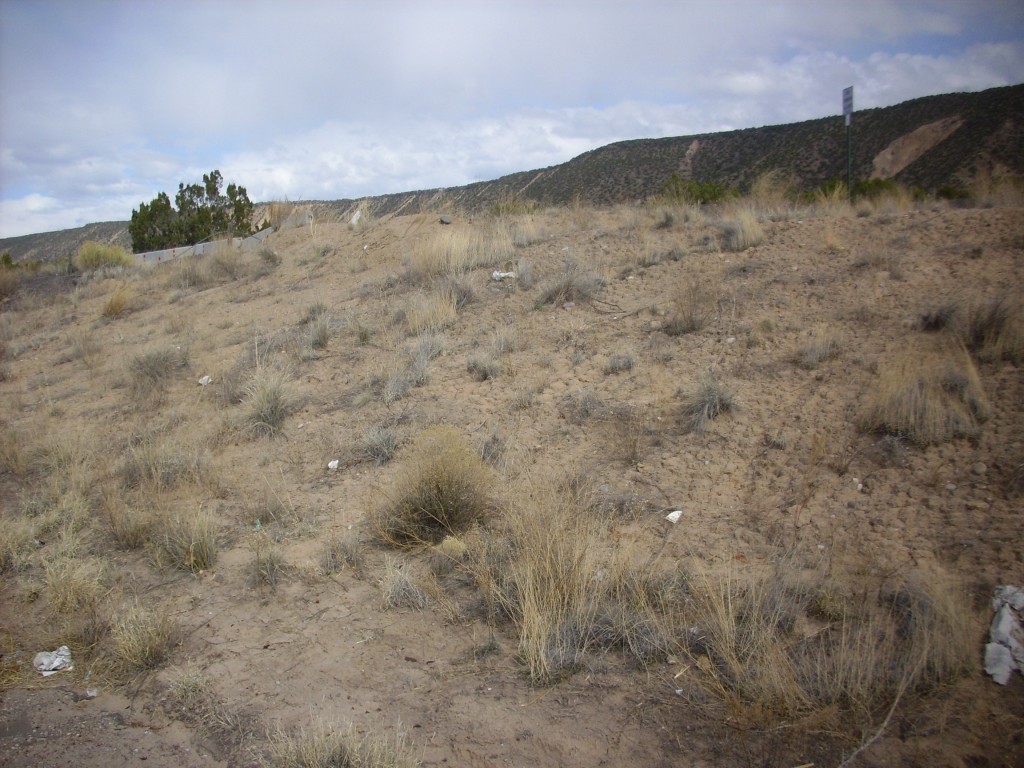 But I won’t end up using this picture. I checked my geologic map when I got home and this area is Ojo Caliente sandstone, not eolium. Plus this may be artificial; it turns out there is a large rest area with picnic tables and pavilions beyond.

Which has been blocked off with large concrete barriers (map). Go figure. All I can think is that someone changed their mind.

Eolium: That’s the term for sediments deposited by wind action.

The north face of the mesa does not, sadly, show any obvious contact, though there are numerous slide scars. 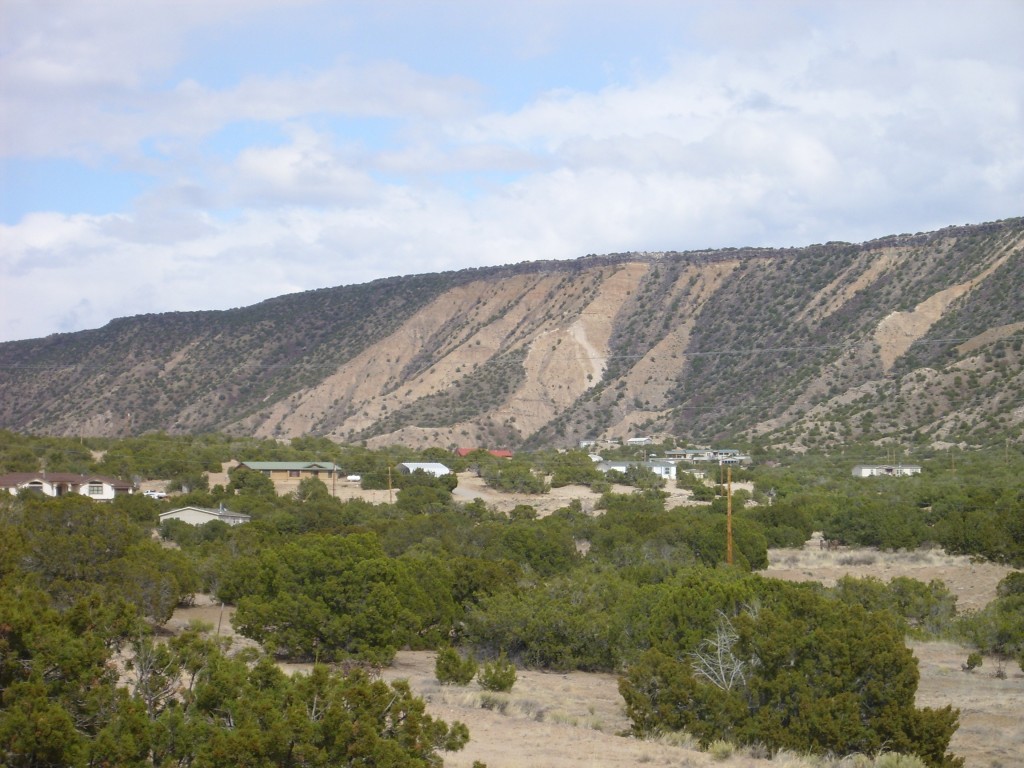 Turns out (according to the geologic map) that the Chamita Formation rapidly thins away to nothing as one looks further north along the mesa.

So I turned around and headed back. I tried for one more good shot of the west end of the mesa; this one exactly opposite the landslide scar. 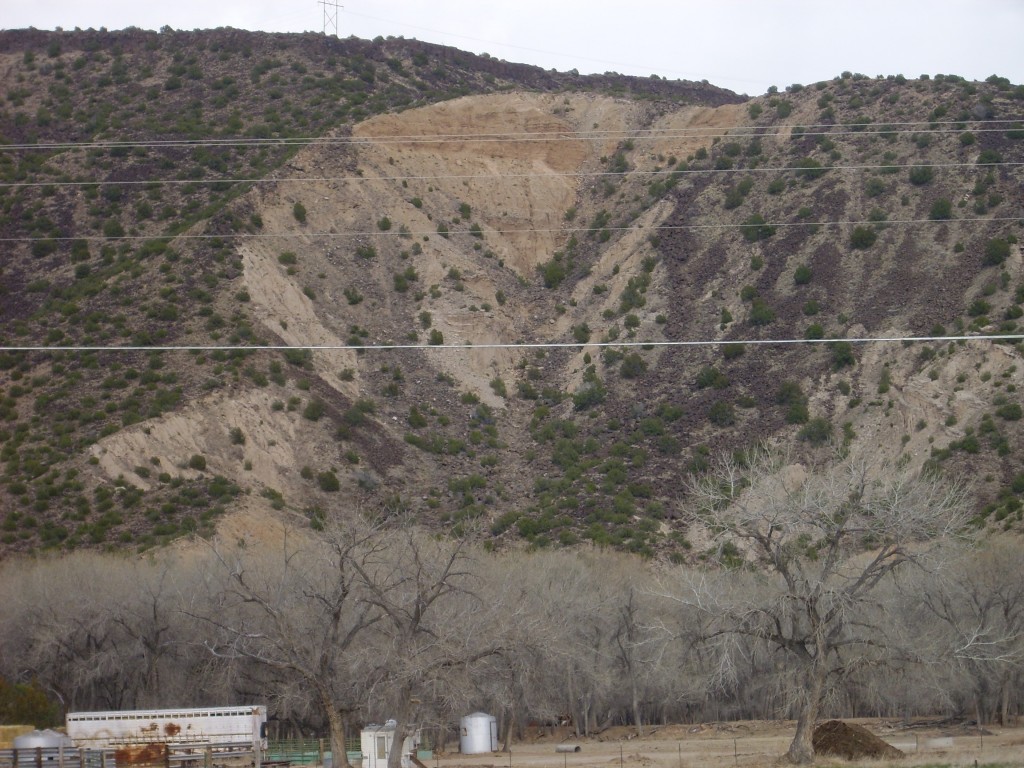 Alas, the power lines are rather distracting. Not one for the book.

The next stop was at Arroyo Largo to photograph the distinctive quartzite gravel bed in the banks (map). 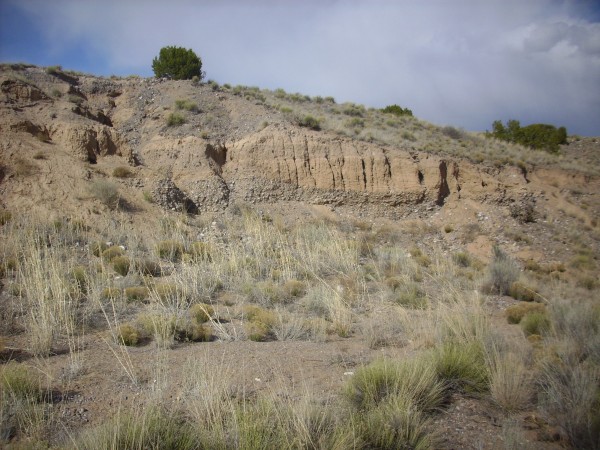 This is another marker bed, found at the base of (ahem) terrace deposits throughout the area west and north of Espanola. It’s very distinctive, consisting of the kind of polished quartzite stones you find in river bottoms. I don’t actually know how to interpret it; my geologic map for the area offers no explanation. But for some reason the Rio Grande Valley in the Espanola area carried a heavy load of gravel from the mountains to the north for a geologically brief interval of time in the last two million years.

I took another picture of terrace gravels just south of Espanola. No, not going to bother …

Finished with two panoramas. The first is the other Black Mesa, seen from the west (map).

Black Mesa is the core of a volcanic vent that erupted not quite 3 million years ago. You can see curved beds of cinders on the right side of the mesa, now cemented into layers. There are also columns of cooled lava at the base of the cliffs right on the boundary between the first and second frames (click to enlarge).

And a panorama of the northern end of White Rock Canyon (map).

Or, at least, of the eastern side of the north rim, Buckman Mesa. The mesa is capped with thick beds of basaltic andesite and andesite. Peeking out under these are beds that I first took for lake deposits, but which my geologic map identifies as phreatomagmatic beds — layers of fine fragments of lava and country rock produce when magma from below hit country rock saturated with water and produced steam explosions. Presumably the vent is the large cinder cone, Otowi Peak, that sits on top of the mesa in the last frame.

The northern half of Buckman Mesa is tribal lands, but the southern half is private or BLM lands and accessible to hikers. If I can get my shoulder fixed up right, and if I can get good directions, I plan to hike to Otowi Peak sometime. There is apparently a trail that is popular with local hikers.

From here I started up the steep road to White Rock. About halfway up, on the steepest part of the road, I notice steam coming from under Clownie’s hood. Well, this is disquieting. But then the road leveled out and the steam disappeared. Got the rest of the way home uneventfully. Popped the hood; yeah, there was radiator fluid everywhere. Blasted Jiffy-Lube minions; they must have spilled fluid in my engine compartment during the servicing.

Went to church Sunday without thinking much about it. (Very short drive.)

My department is a mixture of nuclear engineers and astrophysicists, for reasons I’ll get into some other time. One of them, Jon Dahl, is a friend from church, and one of those engineer types who really, really likes working with stuff. (Which makes it strange he’s basically doing theoretical calculations for a living, but whatever.) We inspect the car, find that there is almost no fluid left in the radiator, fill it up with fresh water, and watch the slow dripping commence from the bottom of the radiator. Close inspection shows it’s coming from somewhere in the middle of the radiator itself. Well, shucks, and other comments. My radiator has a leak and needs to be replaced.

I get an estimate from my favorite mechanic in town. $330 to replace. That’s a lot more than I want to put into a car as old as Clownie. Or would be if it weren’t for the odd sentimental attachment, and the fact that Clownie gets about twice the gas mileage of our other cars. I consult with Cindy. Upshot: She doesn’t want to pay $330 either, but $50 is fine. And Jon, as I said, is the kind who likes tinkering with old cars, a lot. He offers to replace the radiator, for the sheer fun of it, when he has some spare time, which will be in about a month. Fine by me. So Clownie is sidelined for the next month, and, after that, will be my commute-to-work car. Exclusively. I can handle a breakdown on the road to my office; not in the wilds of the Jemez.

Next post: My birthday wanderlust, and my first wanderlust with the Santa Fe.