I’ve now been out of the arm cradle for three weeks, I’m back to full time at work, and I’m feeling almost human. Naturally, the wanderlust is raging.

I took a small adventure last Saturday. My older son, Nathan, wanted to attend a gamer’s convention in Albuquerque and needed me to drive him down. I figured this could be quality time with the boy and agreed. We had a pleasant chat driving down, but the gaming center itself was dark, hot, and crowded with young men in their teens and twenties, which left me feeling a tad out of place. (No like crowds.) Nathan estimated when he’d be done (several hours) and I excused myself.

The first stop was the local mall. I have not been to one in a while. It appears that, with very few exceptions, everything in the mall is geared either towards adorning the body or increasing the display area. Clothes, shoes, jewelry, and high-caloric foodstuffs. Even the book store is now in a separate building nearby. Naturally that’s where I did all my shopping; I bought one book, on my other hobby (military history), but the pickings were otherwise slim. It’s tough to beat Amazon’s recommendation engine. At least I got some good walking exercise.

I still had time on my hands. I’ve been to the Albuquerque Volcanoes recently, but it’s been years since I’ve been to Sandia Crest, and I also vaguely recalled there being some greenstone exposures in Tijeras Canyon. Excitement! Adventure!

Not enough time! But I did make it to Tijeras Canyon before I had to head back. Yes, there are greenstones there, though you have to get off the Interstate to get at them. 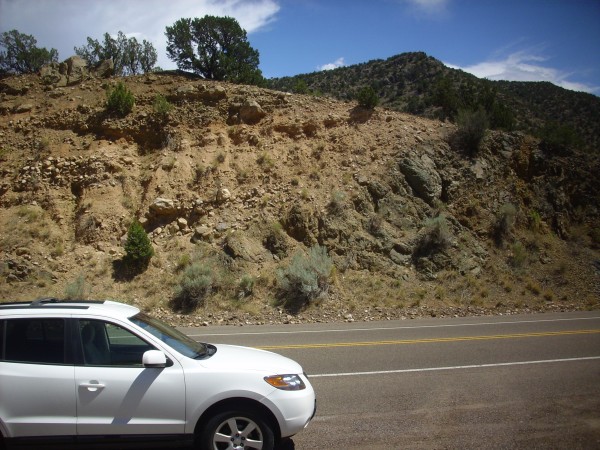 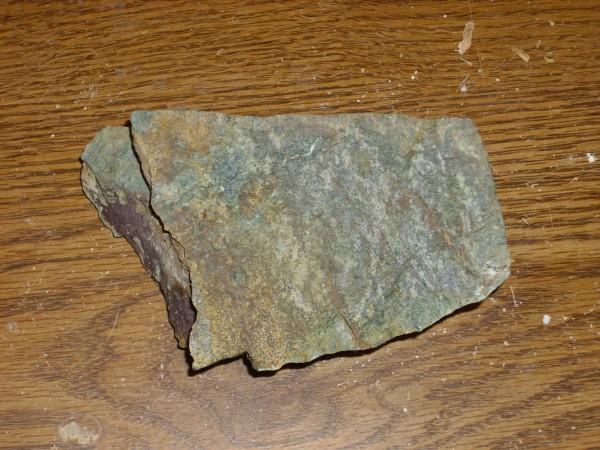 Greenstone is basalt that has been moderately metamorphosed. The greenish color comes from alteration minerals such as chlorite and epidote. This sample also has a rind of iron oxide, suggesting a high iron content in the original rock. This sample is somewhere around 1.6 billion years old, and its content of rare earth elements suggests it came from depleted mantle — mantle that has already produced a fair amount of magma. This is consistent with the notion that New Mexico formed from island arcs that formed out in an ocean, where mantle tends to be depleted, and were the carried into the southern margin of Laurentia, the Precambrian core of North American.

Across the canyon to the south, the greenstone was overlain by Pennsylvanian Sandia Formation and Madera Formation. 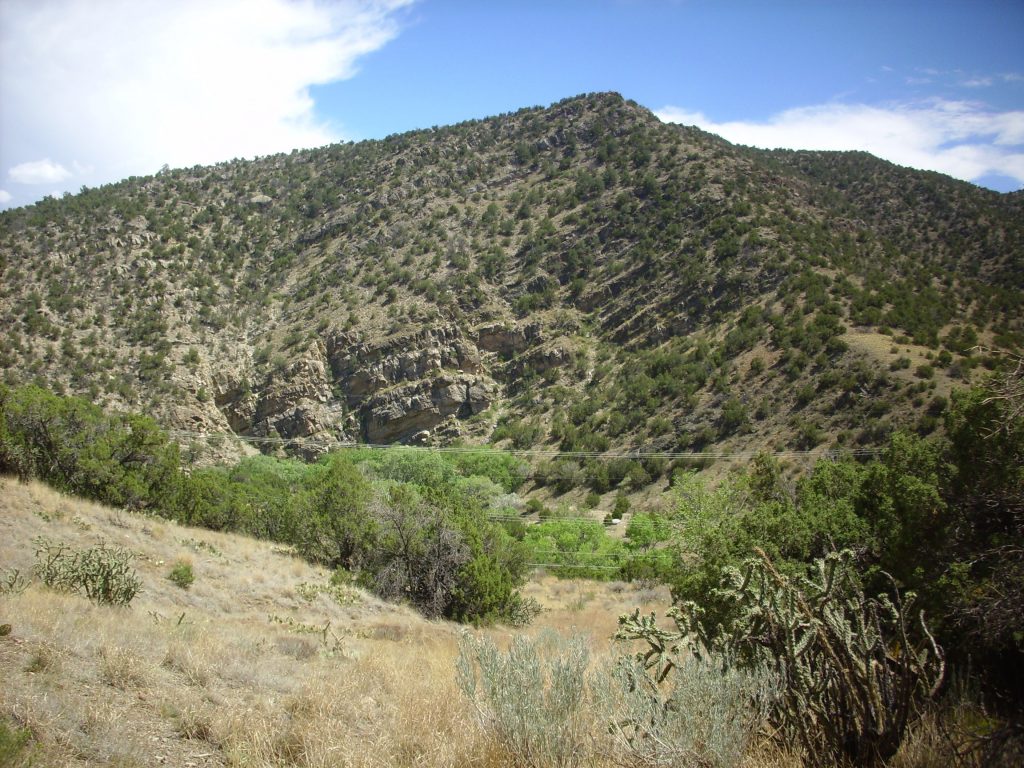 The cliffs towards the bottom are likely Sandia Formation, while the gentler slopes above are Madera Formation.

I drove a little further west along Route 66 and encountered a lovely granite. 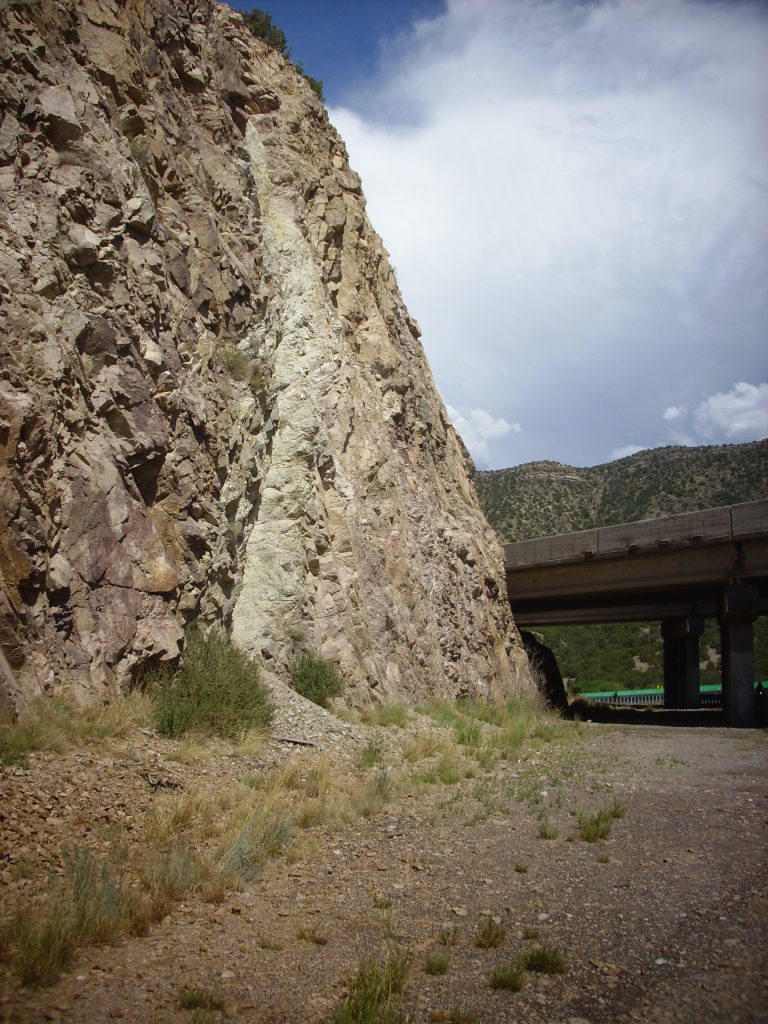 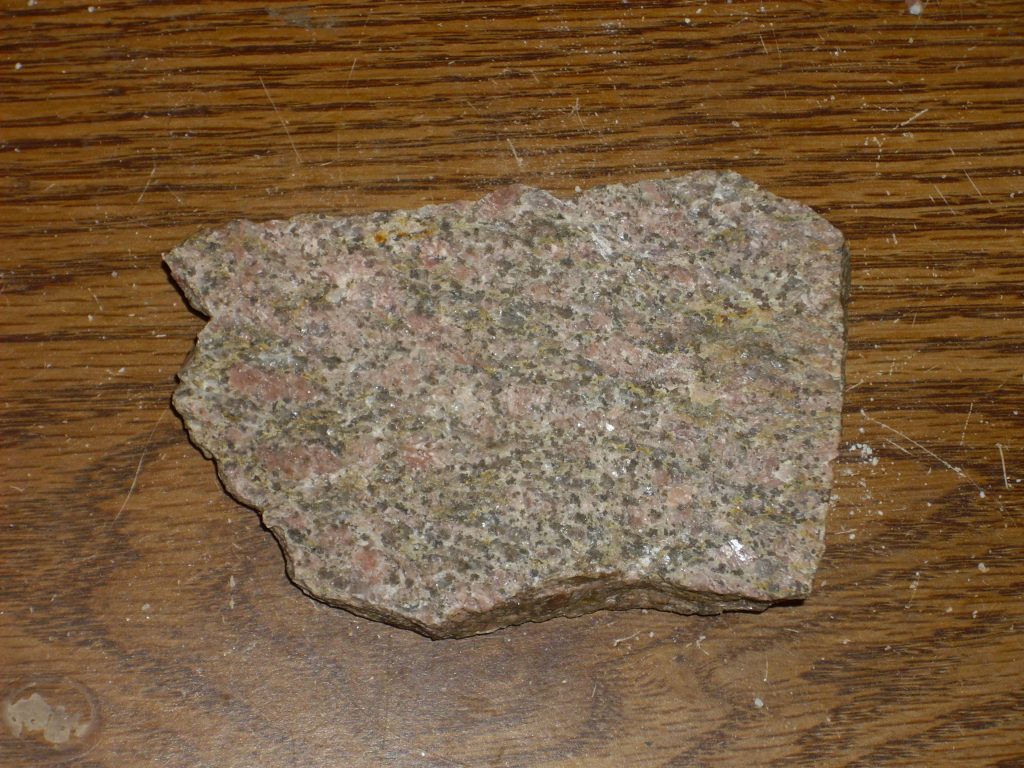 This rock is about 1.64 billion years old. This is as old as rock gets in this part of New Mexico, which originally formed at this time as part of the Yavapai Precambrian province. A monzogranite is plutonic rock (formed from magma that cooled very slowly underground) that is very high in silica and alkali metals and contains smaller amounts of calcium. This results in a rock containing quartz, micas, and roughly equal quantities of alkali and plagioclase feldspar. The pink color is typical of potassium feldspar.

Continuing west, I had time to look at one more outcrop. This one was obviously granite or granite-like; no other rock weathers into quite the same rounded boulder shapes. 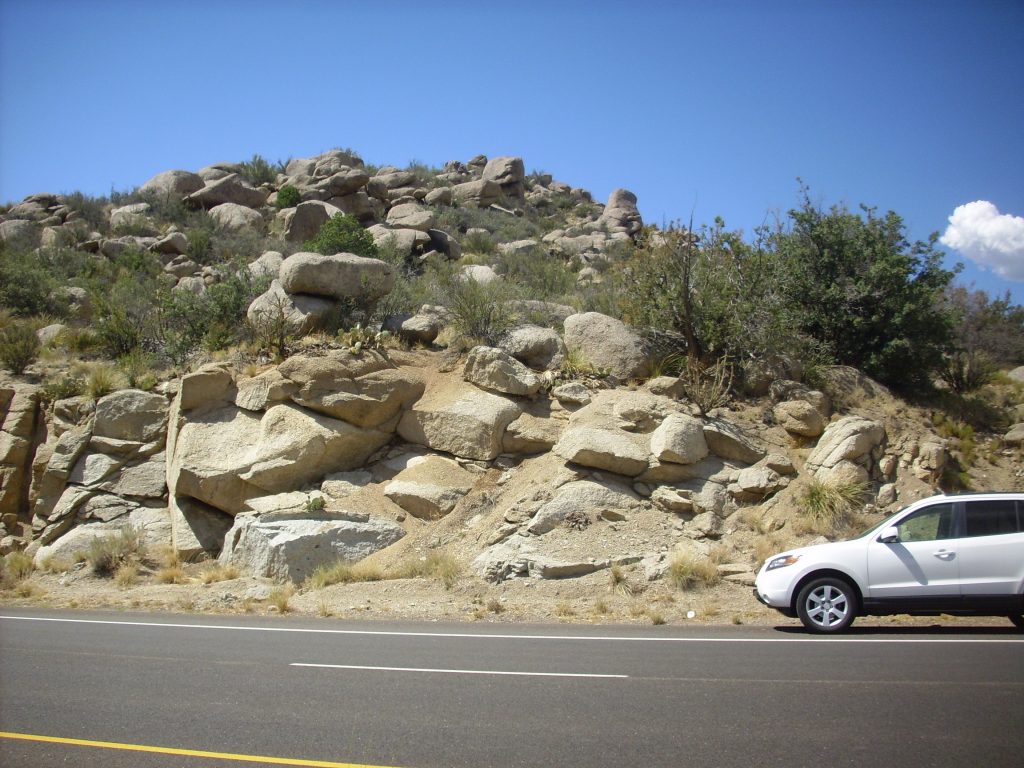 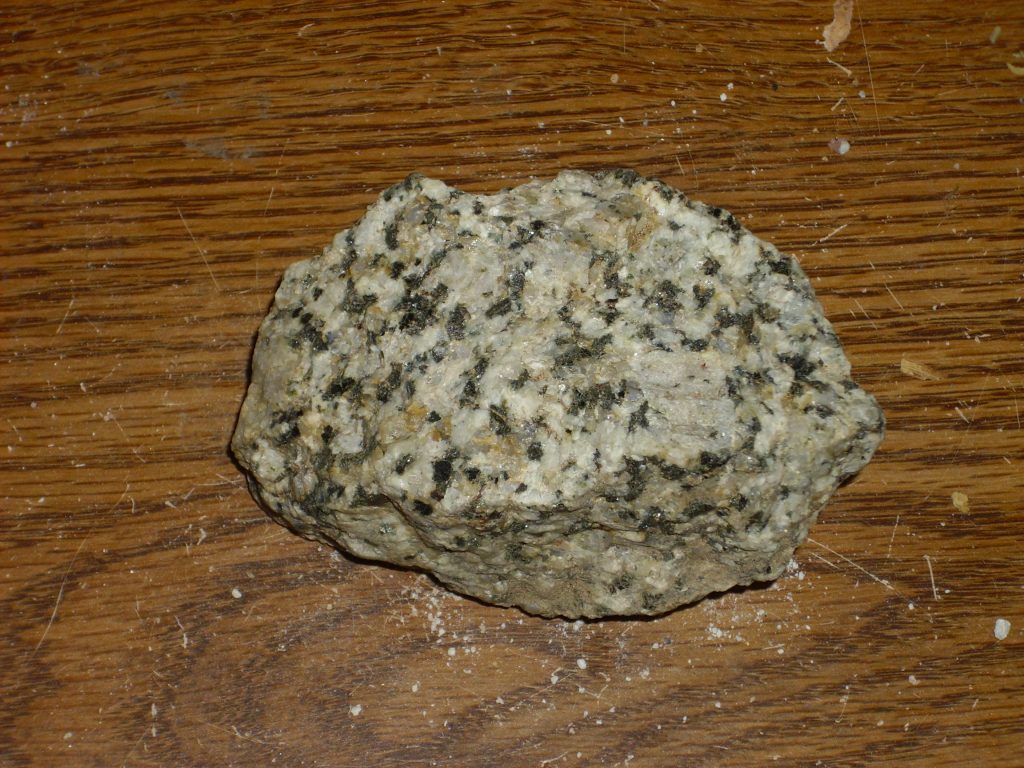 This sample is about 1.43 billion years old. This corresponds to a time when there was widespread heating of the crust of western North America, for reasons that are not well understood; it cannot easily be accounted for by a continental collision, and so this is spoken of as an anorogenic burst of granite formation.

The Sandia Granite is notable for its inclusions. 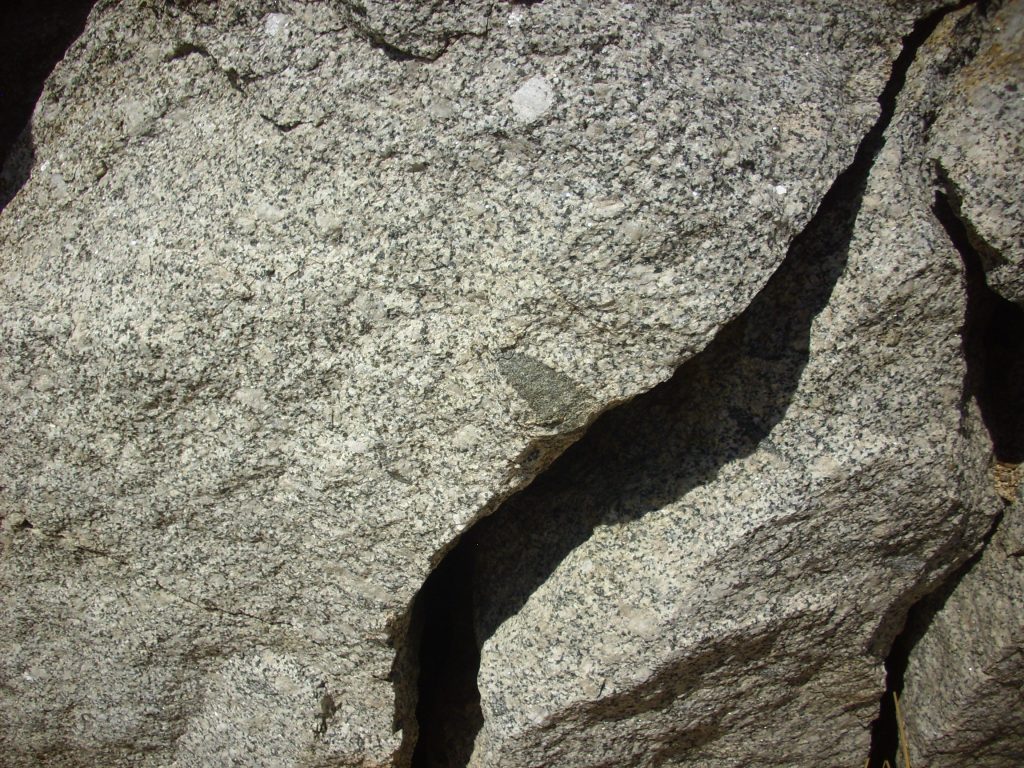 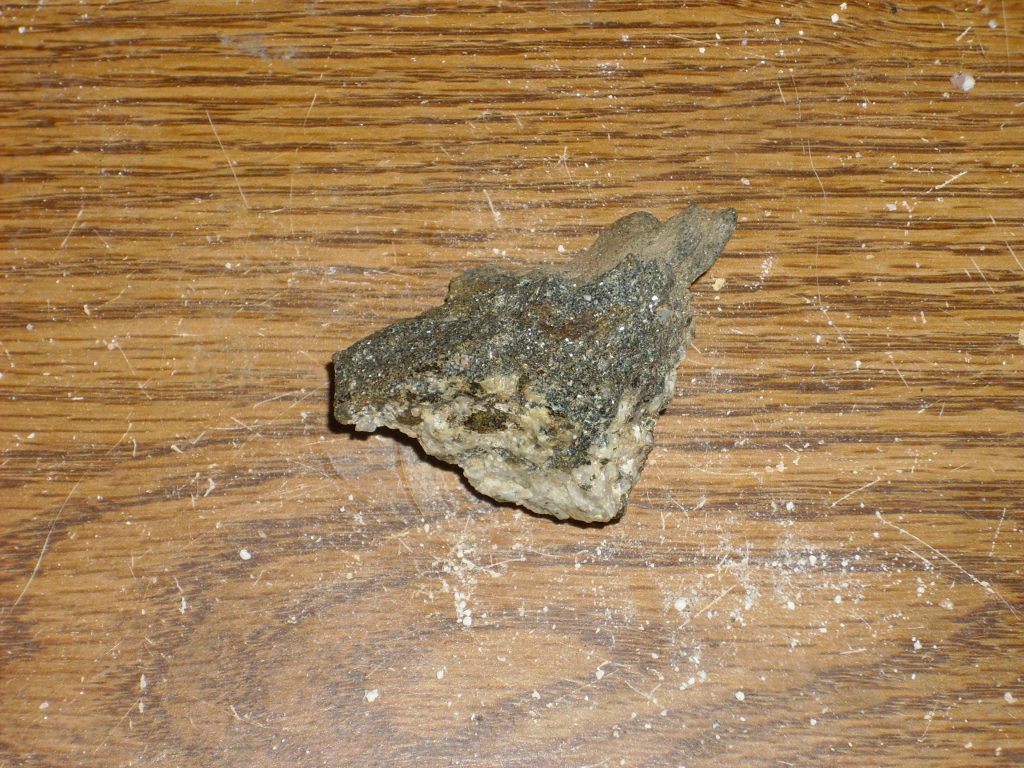 The smooth shape of this inclusion suggests it is not a xenolith, or fragment of country rock caught up in the magma. It has been interpreted instead as a bubble of iron-rich magma in the surrounding iron-poor magma. It turns out that, under some conditions, iron-rich and iron-poor magma do not mix easily, somewhat like oil and water. The sample (from a different inclusion) consists mostly of amphibole; the crystals do not look flat and they don’t mind a needle, whereas the black patches in the granite show the flat appearance of mica and flake away when poked with a needle.

I was out of time, so I picked up my son, took him to dinner, then headed home.

Not bad for the first wanderlust two months after surgery. Today I did a much more ambitious wanderlust, which I’ll post presently.