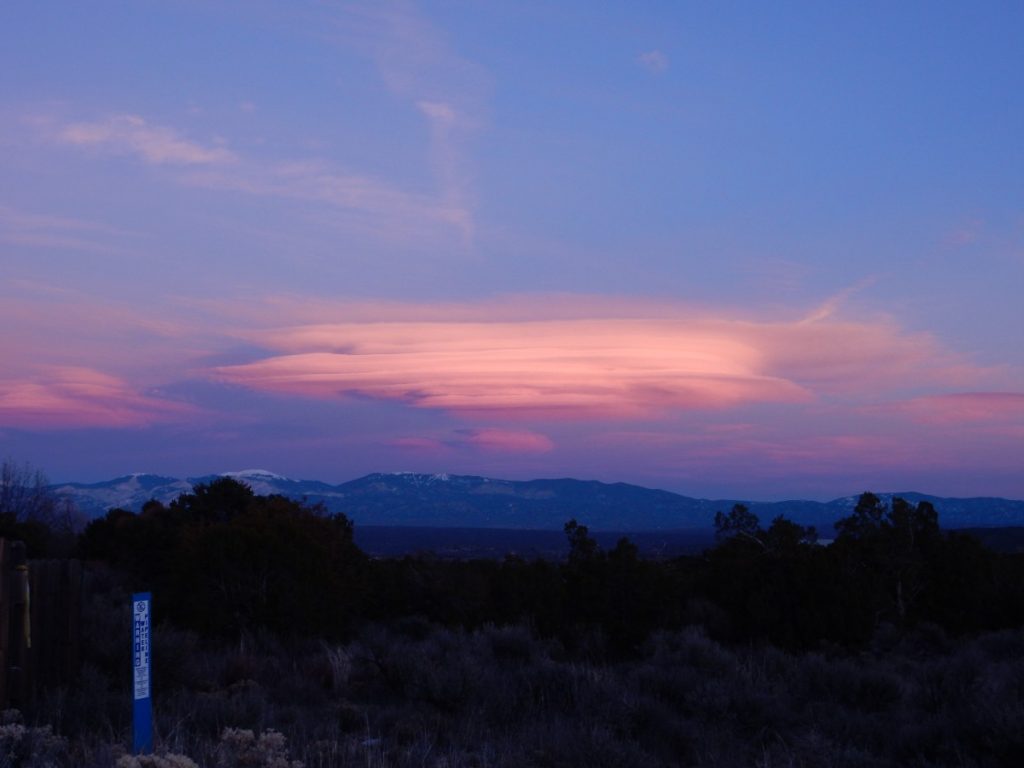 Lenticular clouds form when there is a steady wind at middle altitudes and moisture levels not quite at saturation. When the wind passes over a mountain range, such as the Sangre de Cristo range seen here (east of my home), the flow is displaced upwards, the air expands and cools, and moisture condenses as clouds. When the flow is over the mountains, it drops back down, compresses and warms, and the clouds evaporate.

This is one of the better examples of lenticular clouds I’ve seen, which I spotted on the drive home from work. Good enough to grab the new camera and rush out to get a picture before sunset. I tried the regular setting first, with fairly mediocre results: 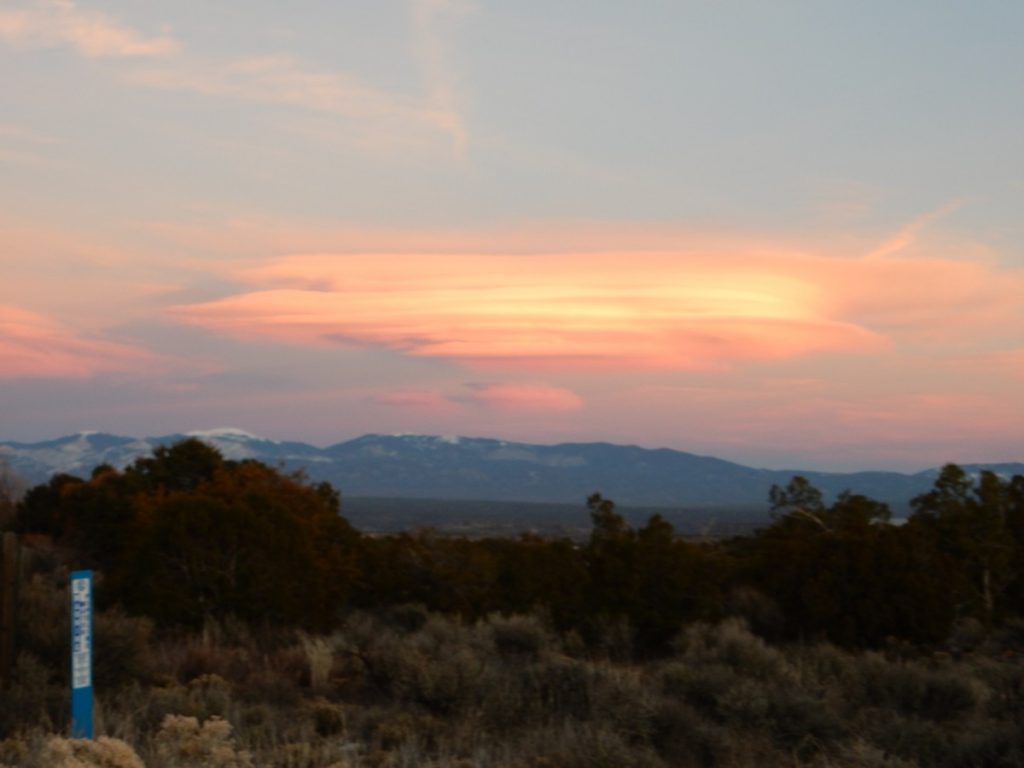 The color balance is off and the focus is quite a bit off. I then tried the twilight setting, with the results shown in the first photograph.

I’ve been playing with panoramas, too. Here’s an attempt at White Rock Canyon. (Click to enlarge).

The problem with both is that they were taken in late afternoon, so that the sun was quite low in the sky. This throws off the exposure level, which seems to be fixed across the panorama. The center (directly opposite the sun) is washed out while the ends are slightly underexposed. I think the lesson is to time my wanderlusts so the panorama shots will take place close to midday. (And plan the trips with lots of panorama shots for midsummer, when the midday sun will be high in the sky.) Still, they’re not bad.

All these had to be compressed a bit to upload, except the last.

I’m liking the telephoto a lot. 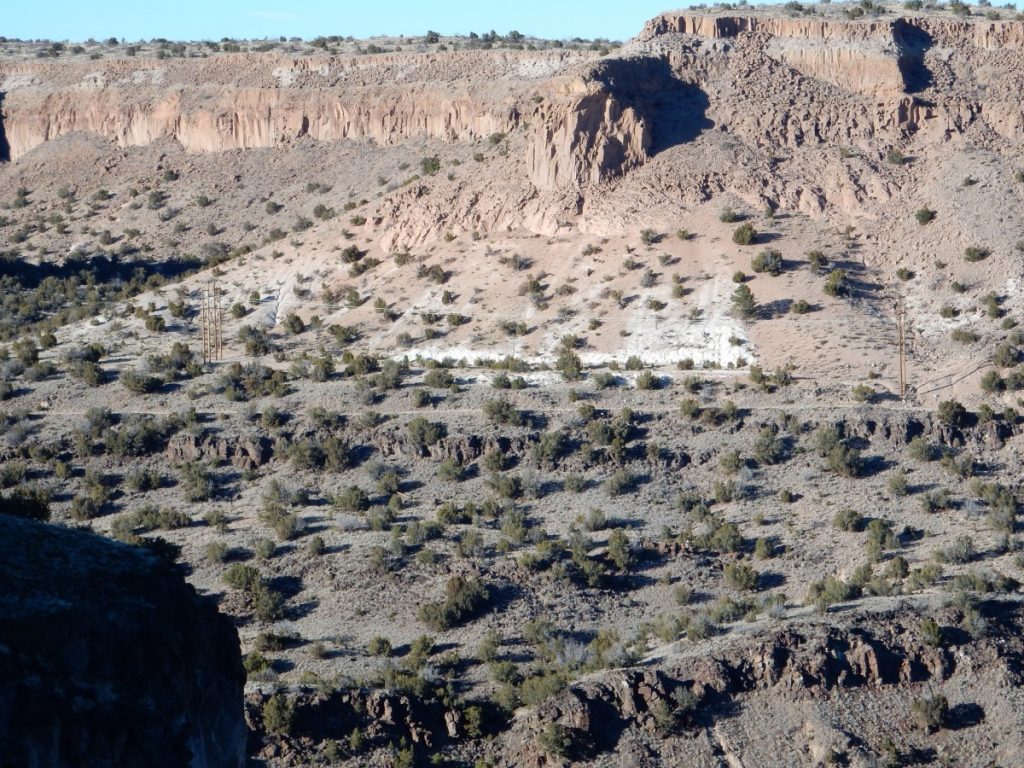 This shot is from the overlook at Overlook Park, looking north at the old Buckman road. It’s quite crisp even at this zoom level, close to 5x. And look at these shots of Santa Fe Group exposures in White Rock Canyon: 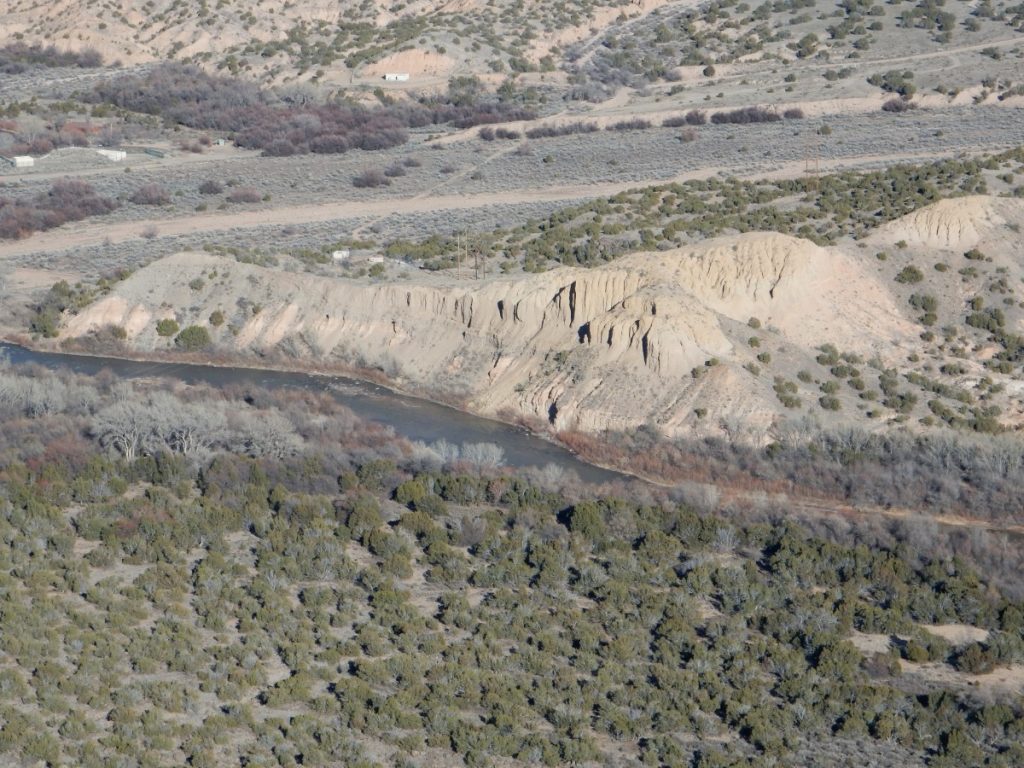 If I’m reading the geologic map correctly — it’s a draft map, and very messy in this area — this is Vallito Member of the Chamita Formation, Santa Fe Group. The Santa Fe Group is all formations composed of rift fill sediments of the Rio Grande Rift; the Chamita Formation is the main formation west of the Rio Grande in the Los Alamos area, laid down around 5-10 million years ago. The Vallito Member was likely laid down by the ancestral Rio Grande. 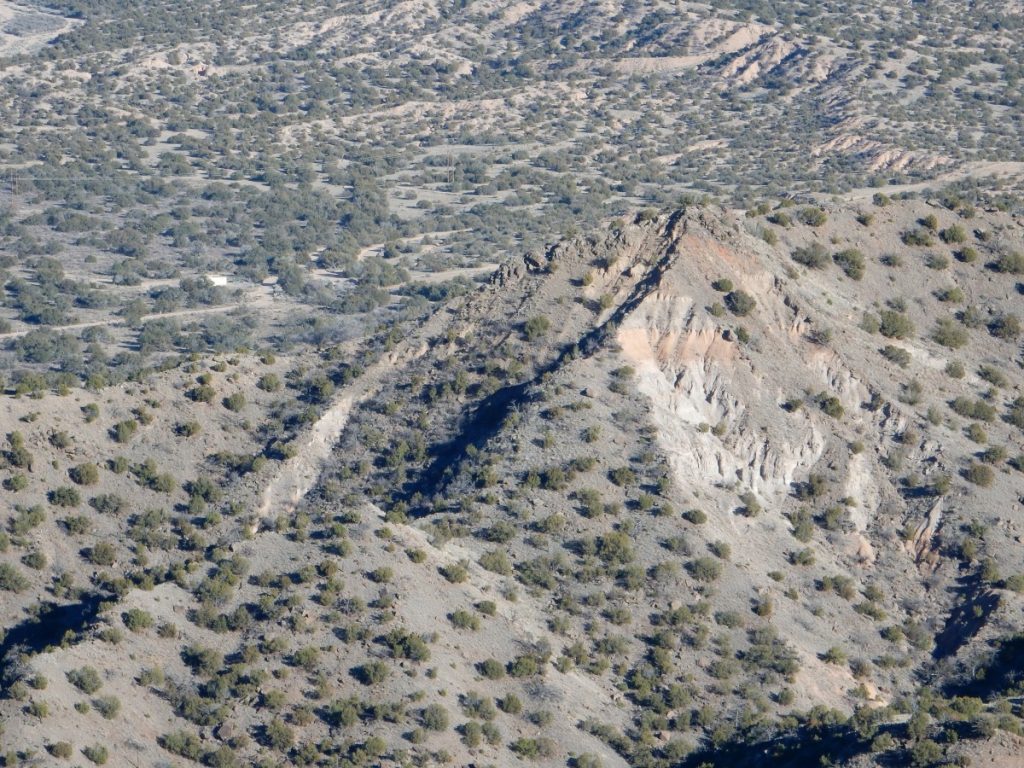 There’s a nice sequence of Santa Fe Group beds exposed on the side of this bluff. Again, assuming I’m reading the map correctly, the lower thick white beds are Hernandez Member, Chamita Formation. Then comes a reddish bed of Cuertales Member, Chamita Formation, which is pink from feldspar grains eroded off the Sangre de Cristo to the east. Then a grayish bed of Totavi Lentil, Puye Formation, marking a former channel of the Rio Grande, and finally a cap of Ancha Formation with more feldspar grains. The contacts of the Puye Formation are particularly distinct here.

I hope all the camera talk is not too tedious for you. This is, obviously, the slow time of year for wanderlusting. The weather has been miserable (cold or wet) the last few weekends. This weekend is quite a lot warmer, and while the sky is murky today, the prediction is for clear weather tomorrow; and I’m getting stir-crazy. I haven’t decided yet where to go tomorrow, but it needs to be low altitude (so there won’t be snow cover on anything important) and not too far off the road. Cindy has expressed increasing concern about me disappearing into the wilds someday and never coming back, and has been trying to extract a promise not to go hiking without a buddy from now on. She’s probably right, but I don’t think I’ll find a hiking companion for tomorrow on short notice. So it will have to be something close to the road, where there is some human traffic around, for her peace of mind. I’m toying with exploring the geology around Placitas, but that’s kind of a long drive; another possibility is to drive into Hagan but remember to take pictures this time, or explore some more around Corrales. The latter has the advantage that if I hike the trails in the state park, there will be both interesting geology and plenty of other people around. Hmm; I’m liking that idea.