Thursday was the big wedding day. Mom and I got up early to be in Logan by 9:00.

Since this is primarily a geology and nature blog, I won’t burden you with too many wedding pictures. But I can’t resist posting just a few. 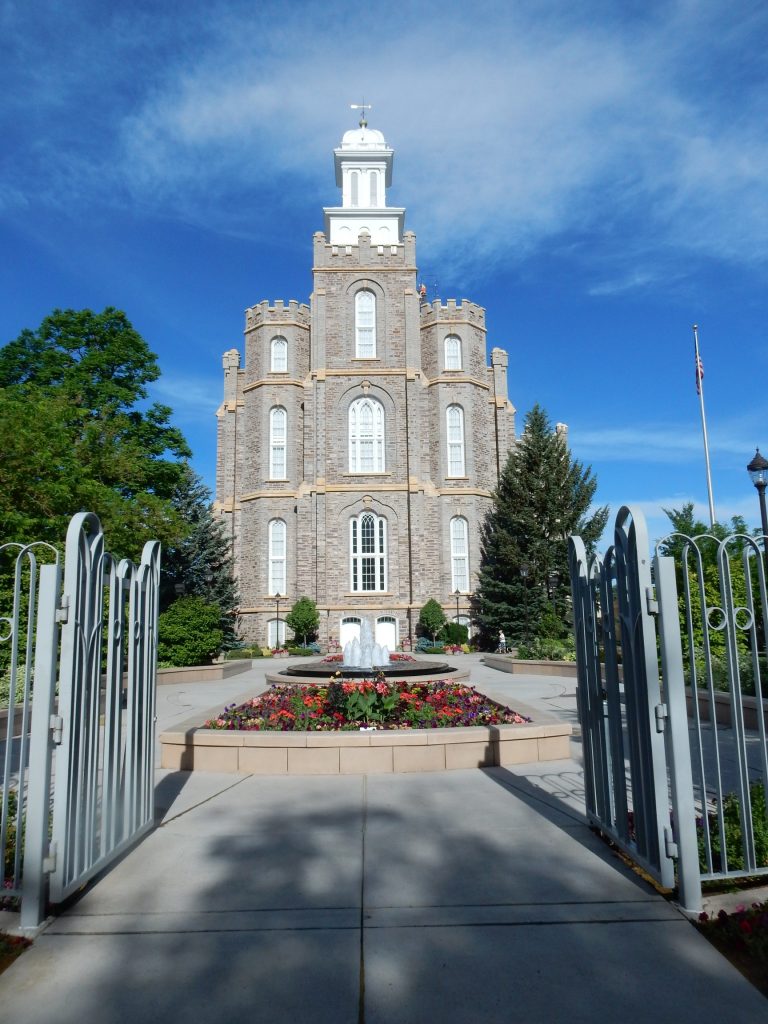 We arrived rather early, and I took this while waiting. Eventually my niece and her fiancé arrived, and my brother and his wife arrived shortly after. The elder performing the wedding was apparently well-known to the couple and their families and gave some wonderful words of advice prior to beginning the ceremony.

The ceremony itself is not to be filmed or otherwise recorded, but there’s something of a tradition of greeting the couple for photographs when they come out of the temple after the ceremony. 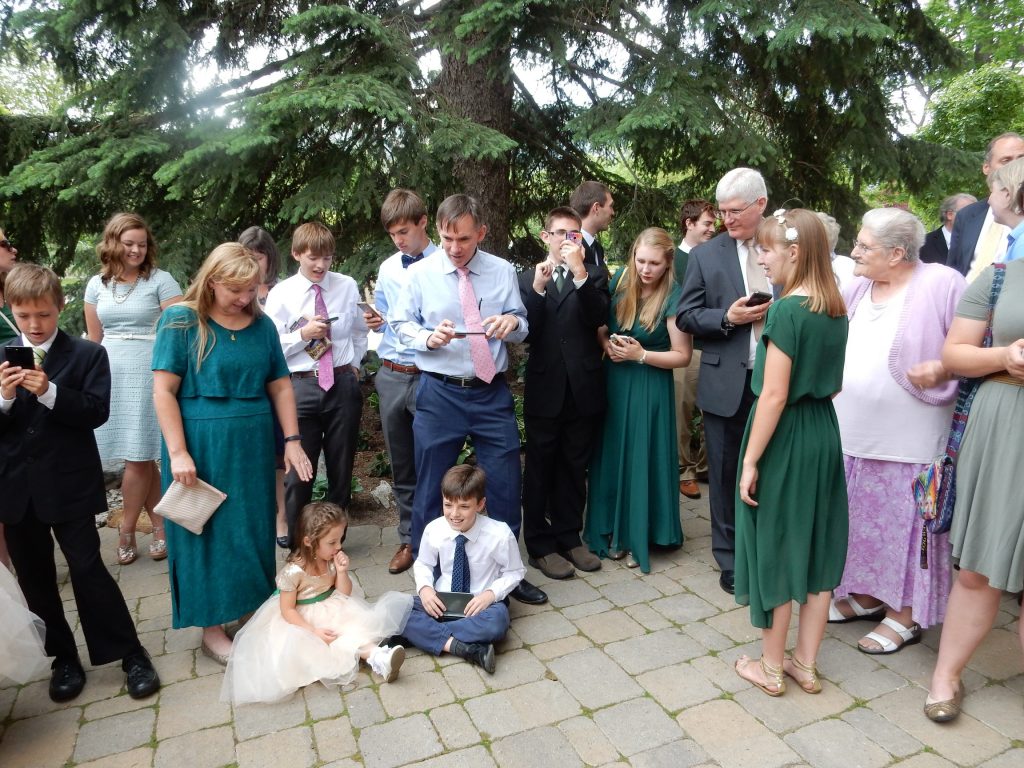 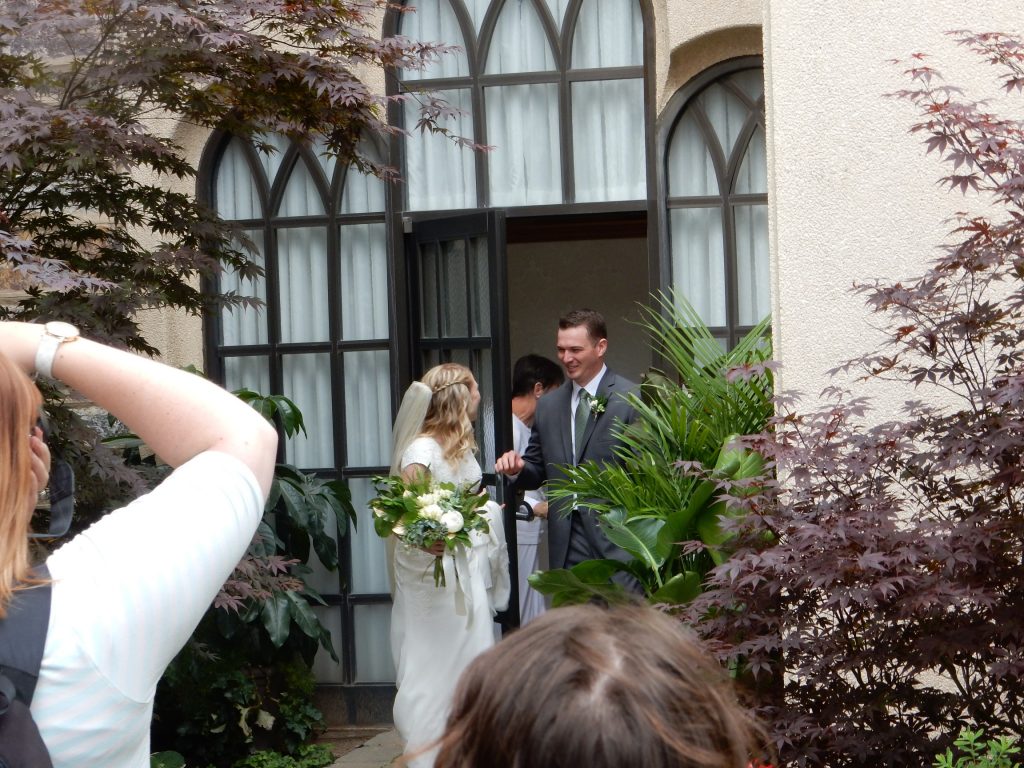 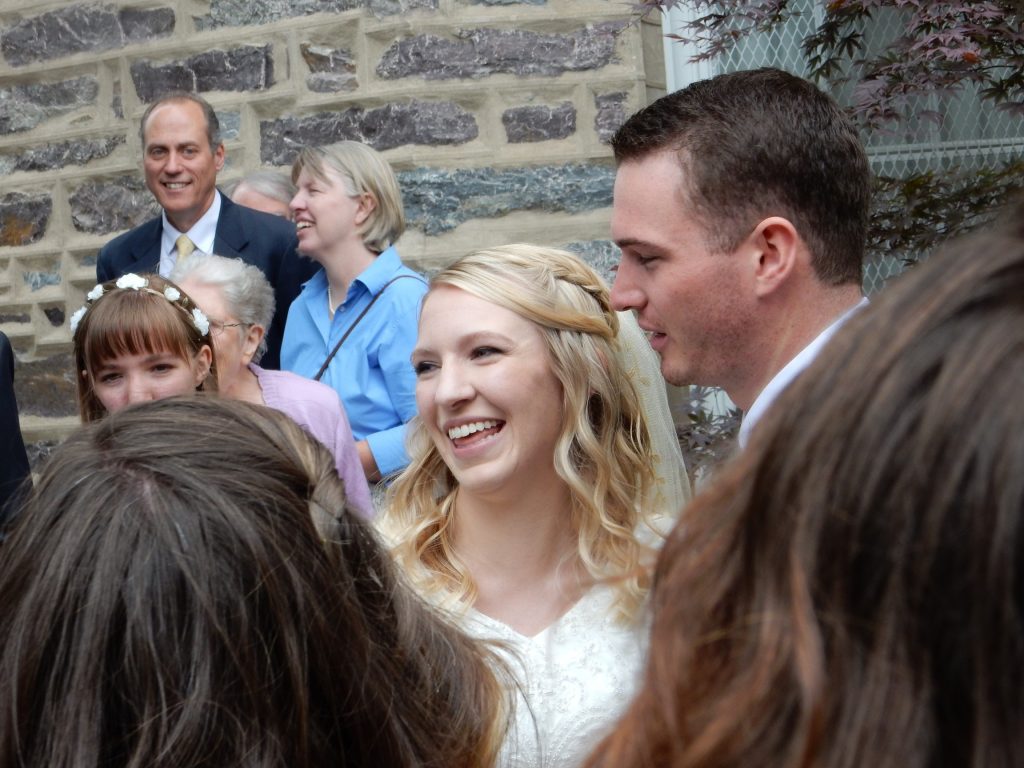 It really was a nice wedding. It was followed by a luncheon hosted by the groom’s parents, and then I headed to my brother’s place to await the reception in the evening. I was feeling the need for some proper exercise, and asked one of my nephews for suggestions. He suggested a hike to a placed called Wind Cave, in Logan Canyon. I was game.

I headed up the canyon, under the impression that there would be a prominent highway sign at the trail head. I saw no such sign, and found myself halfway to Bear Lake before giving up. Well, at least the canyon has some interesting geology. More in a moment.

I didn’t see any highway sign for Wind Cave going the other way, either. I did find a ranger station at the mouth of the canyon. South of the station was some interesting geology. 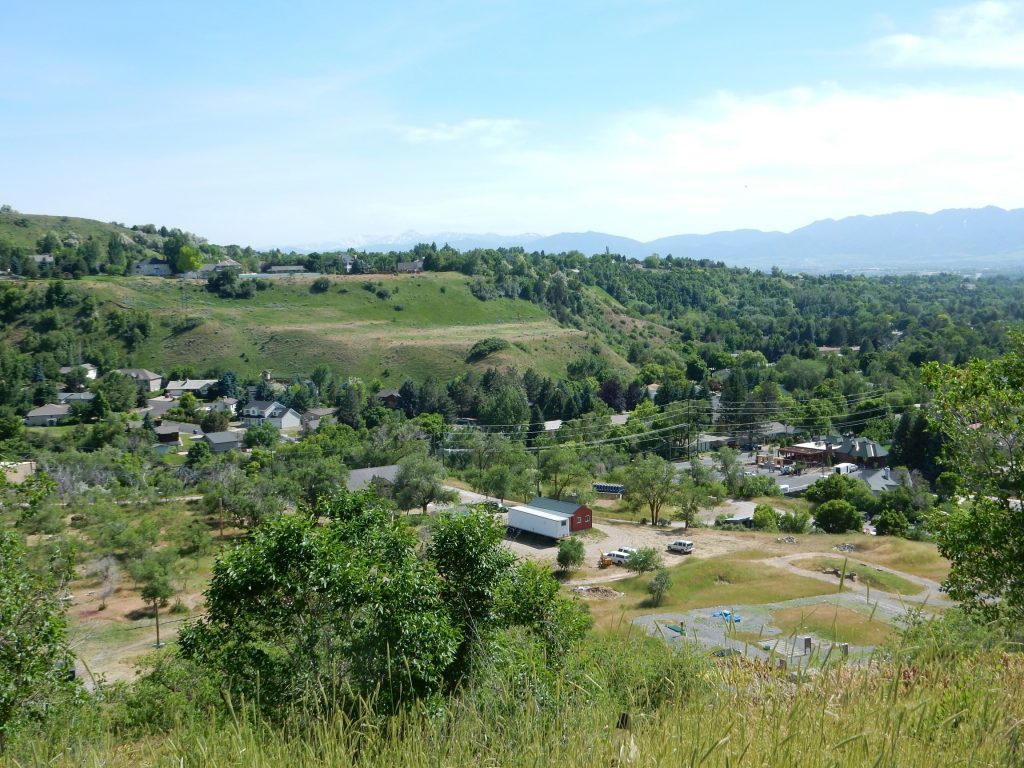 I suspected river or lake terraces, possibly from Lake Bonneville, the ancient ancestor of the Great Salt Lake.  The map confirms this; if I’m reading it right, these are delta deposits on the shores of Lake Bonneville of two different ages.

The ranger station had a  map. The Wind Cave trail head was shown just past a camping area whose sign I had had no difficulty spotting. Huh. I drove back up the canyon, mildly perturbed. I had already lost an hour. Mind you, I wasn’t angry at my nephew for his vague directions, just … perturbed.

The trail head was there. It had no highway sign calling it out, that’s all. You had to know where to look for it.

I threw on my pack and started up the trail. I found myself struggling; the cold had taken a lot out of me and it was a steep trail. And I was in a rush now, because I’d already lost a lot of time. But the trail soon came out onto a meadow with a very nice view to the south.

The prominent gray cliffs are called the Chinese Wall, if I’m reading my map correctly, and are composed of the Mississippian Lodgepole Limestone. The slopes beneath are Devonian in age, and I think that may be the Devonian Hyrum Dolomite cropping out at the base of the far canyon wall. The Cambrian through Devonian are missing from northern New Mexico, but all are present in this area; I may have to explore it some more on a later trip.

Wildflowers. There are some unique species in the canyon, though I don’t think this is one of them. 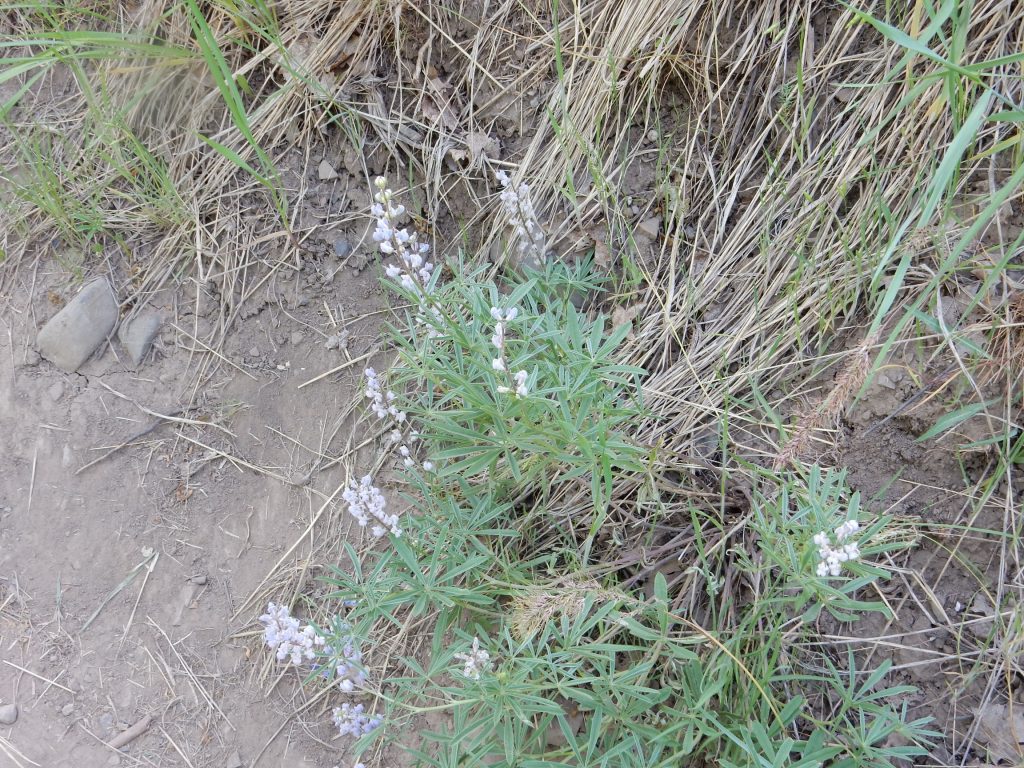 The trail seems to be an old one. There were occasional limestone rocks embedded in the trail, and these were all polished from years of hiking boots. 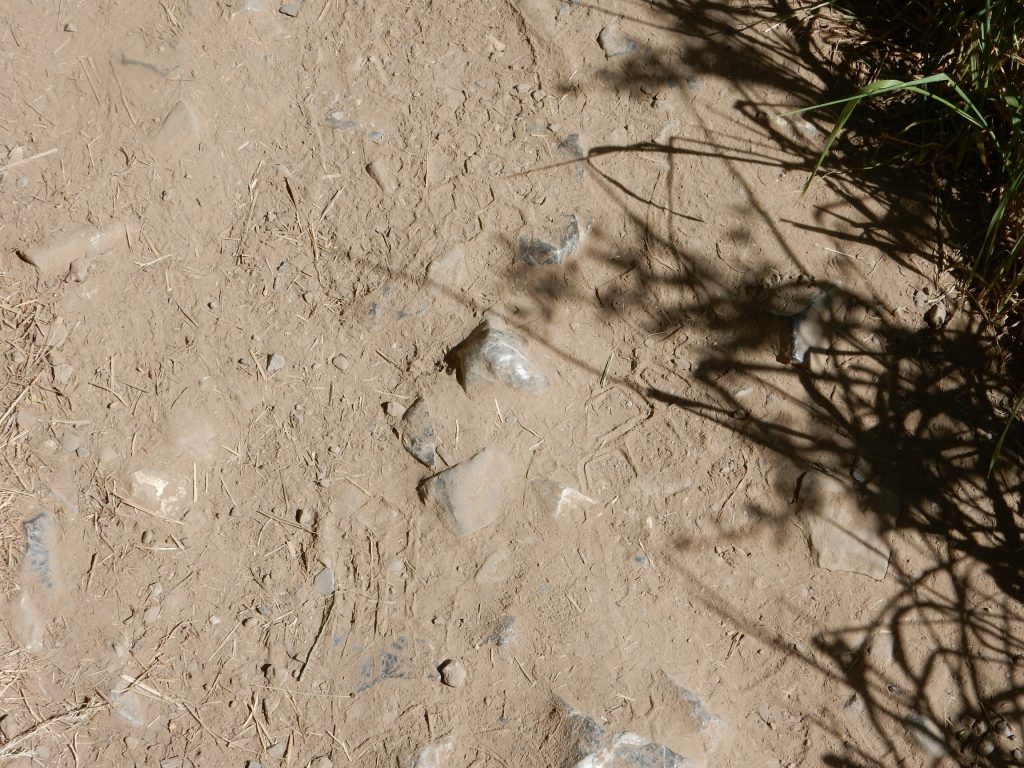 The trail was a real struggle; the cold had really taken it out of me. However, I made it quite a ways up.

The Chinese Wall is impressive. I think the outcroppings above it to the left may be the Mississippian Monroe Canyon Formation, which gives way to Pennsylvanian beds higher up. 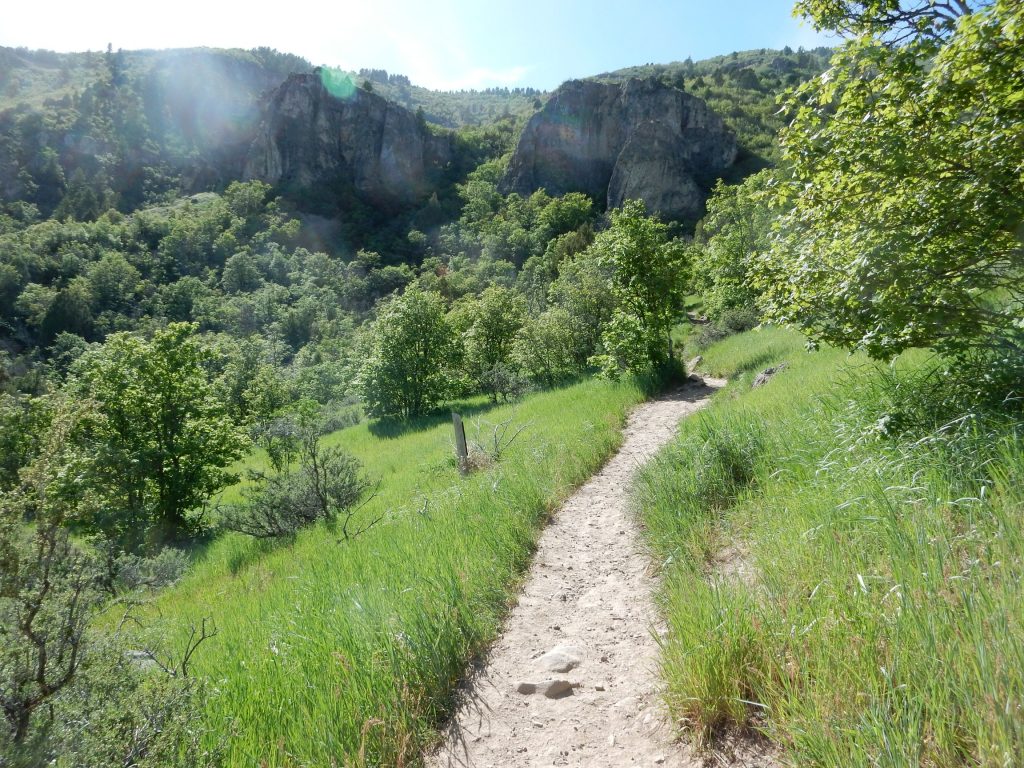 Alas, no; the trail switched back again. But at least there were starting to be some interesting boulders along the trail. 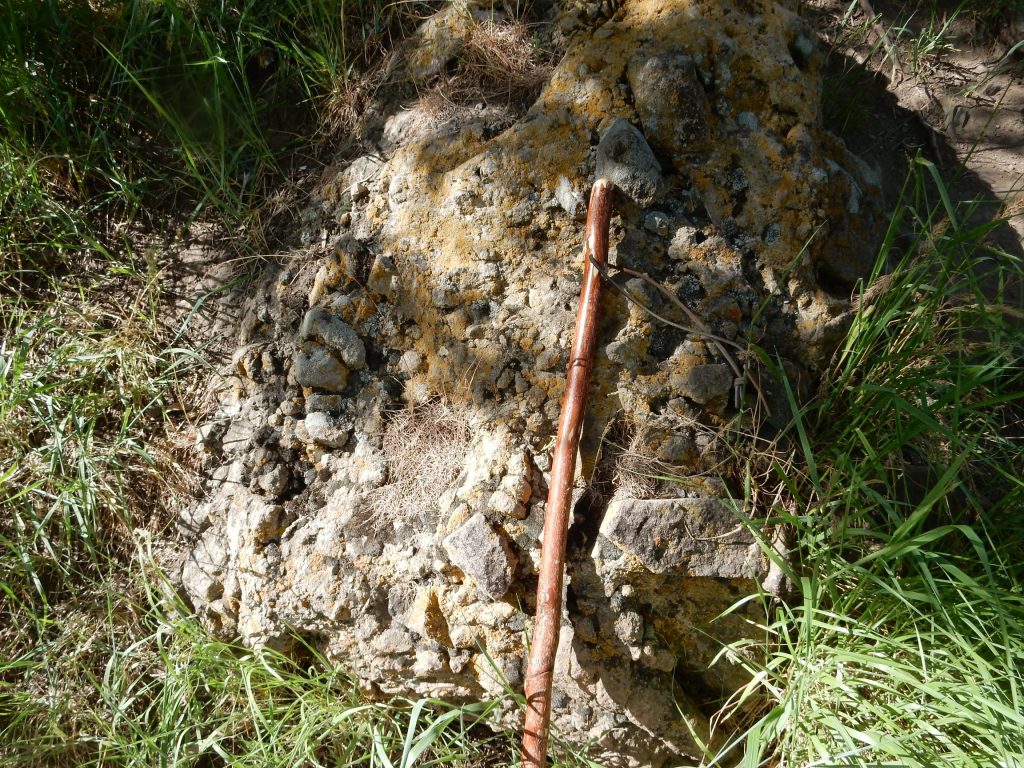 To be sure, I’ve not seen many tillites; they’re debris from glaciers that has been turned into a conglomerate, and there has never been significant glaciation in the Jemez. The key feature is the very flat surfaces of some of the clasts embedded in this conglomerate. Rocks caught at the bottom of a glacier tend to be scooted along to produce a very flat surface, until something jostles the rock and a different face gets a turn at being scooted flat. The only formation mentioned in the geologic map as having anything like this is the Devonian Water Canyon Formation, which is said to include some intraformational breccias.

This is a little clearer. 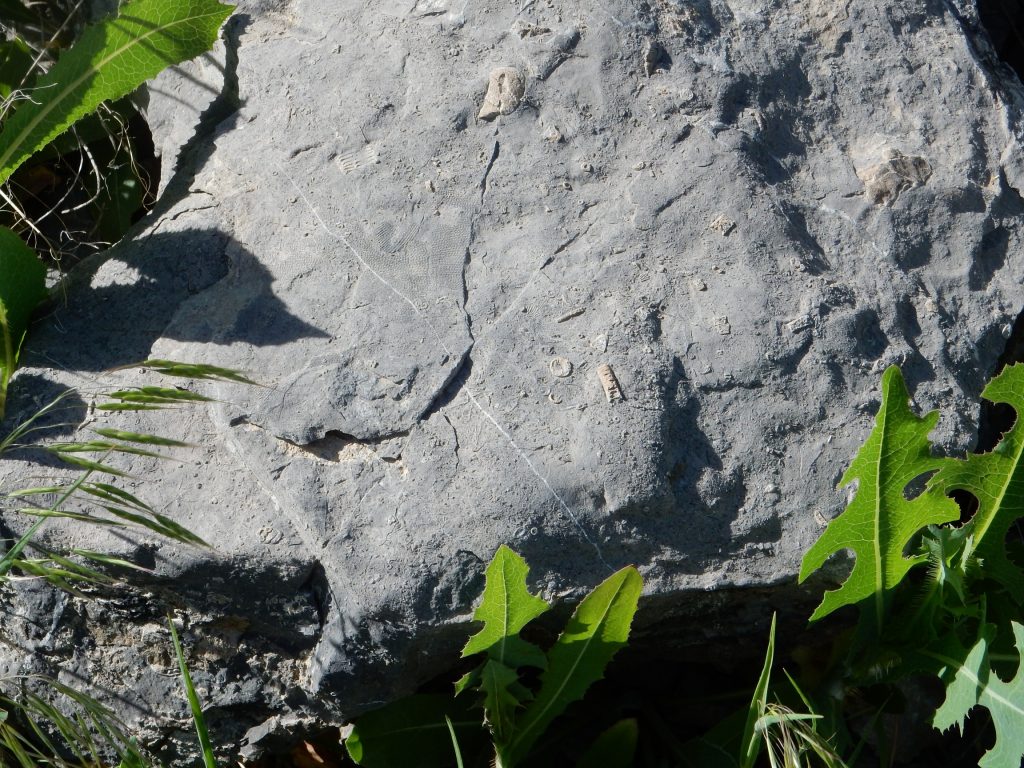 Dark gray limestone with crinoid stems, or I’m a monkey’s uncle. (No offense, Steve.) Also some bryozoans, which you can see if you click for the full resolution; they look like wire screen laid across the rock. That actually doesn’t narrow it down much; crinoids first appeared in the late Cambrian and are still with us, and bryozoans first appeared in the Ordovician.

I don’t know what that thing at upper left, with the regular septae, is. Bruce? 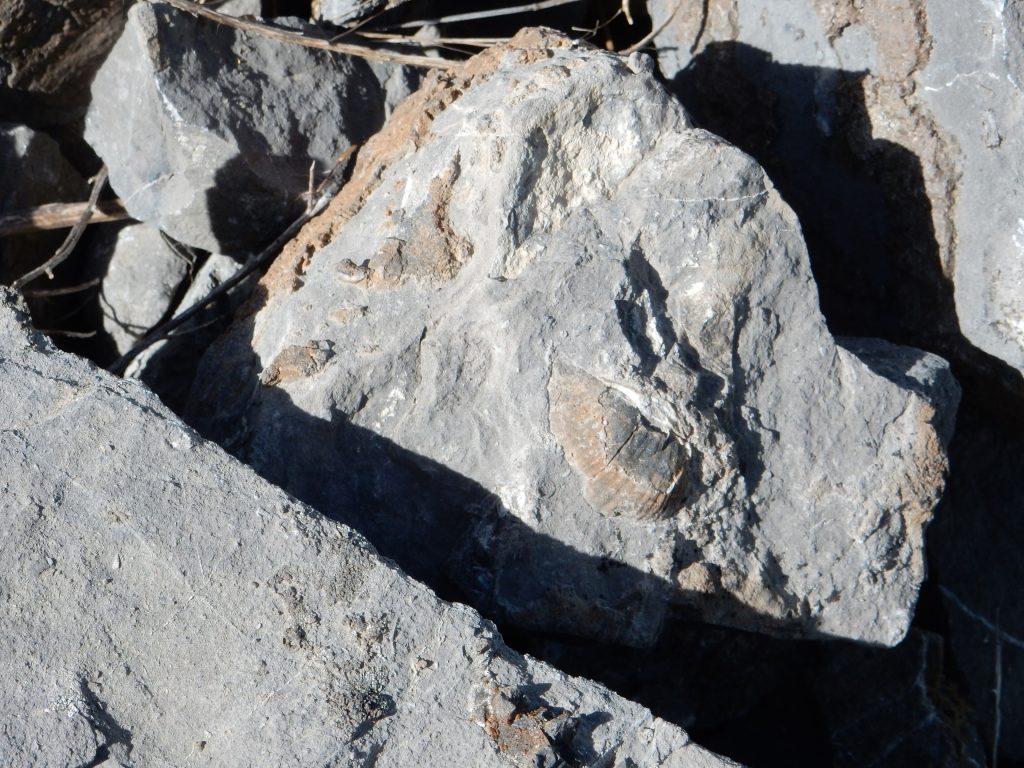 is a brachiopod, which also doesn’t help; brachiopods first appeared even earlier than crinoids. But, looking across the canyon, I’m almost level with the Lodgepole Formation and I’m betting that’s what this is. Mississippian beds tend to be rich in crinoids, brachiopods, and bryozoans.

I got to this point 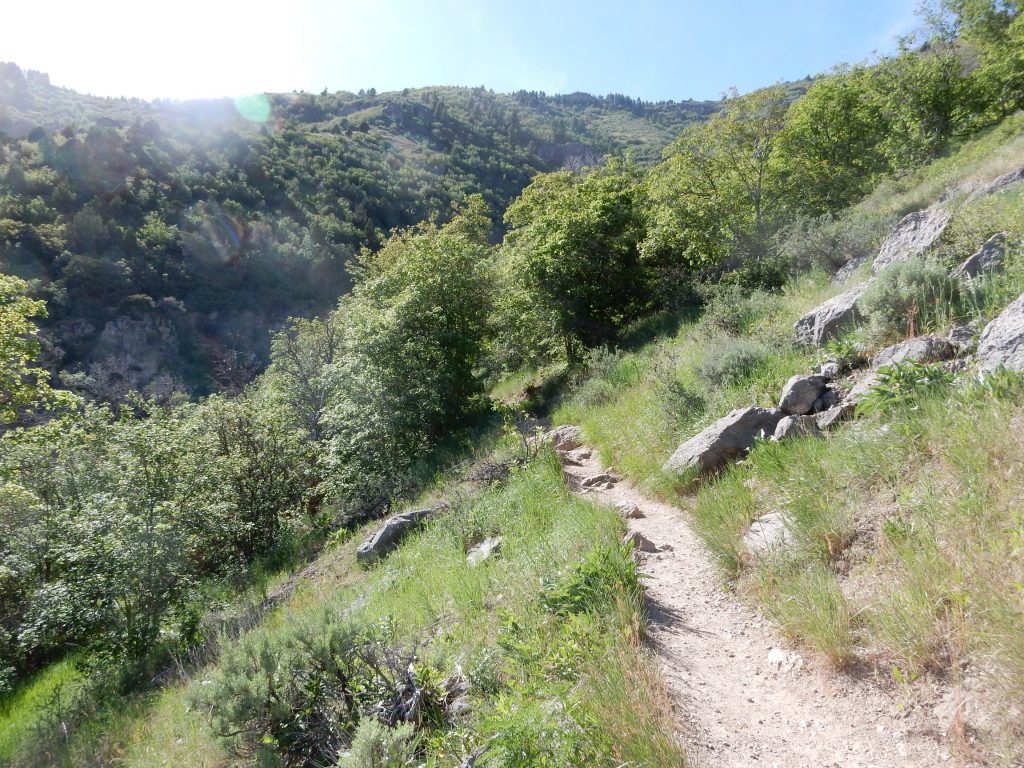 before throwing in the towel. I was gasping for air and my chest hurt, to where I was seriously wondering if it really was my heart. (No. Almost certainly the cold, aggravating the arthritis. But exercise when sick with a virus does slightly raise the chance of a heart attack.) It was almost time for the reception to start back in Logan. And the final straw was someone coming the other way, who reported another 20 minutes’ hiking ahead.

And, to top it off, as I was hiking back, I met someone going the other way who wondered if I owned a white Hyundai. “You left the back hatch open. I closed it for you.” I was grateful I was hiking in Utah; nothing was missing.

Wild rhubarb along the trail, just because. 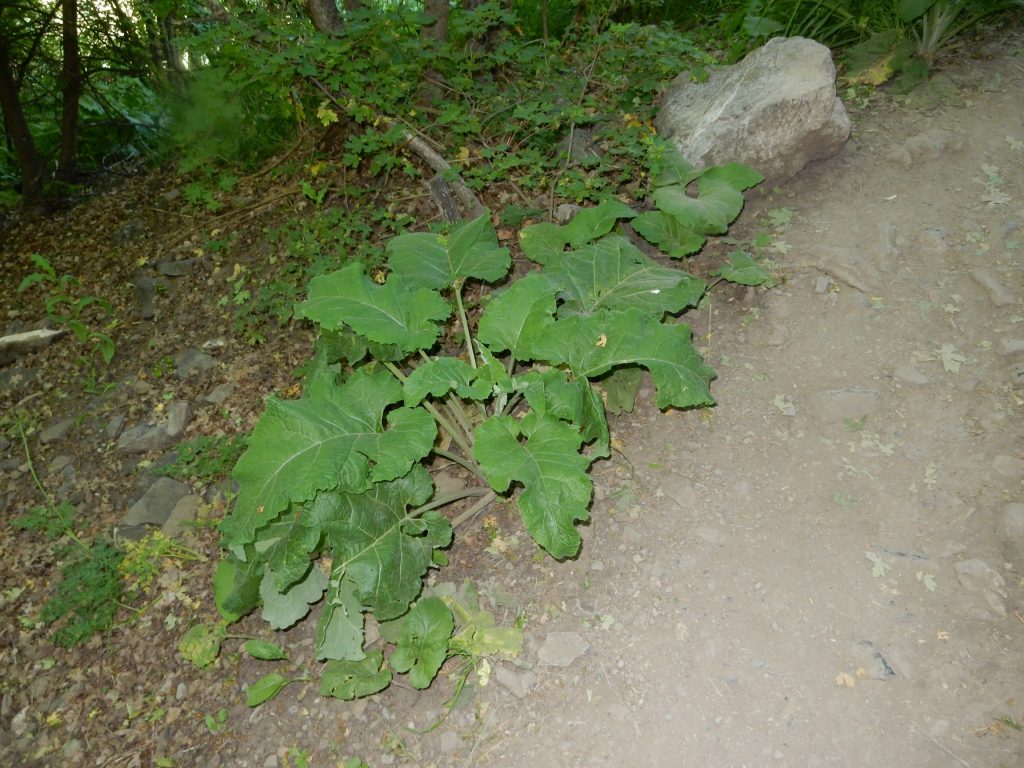 Drove back to my brothers’. Got back in my nice clothes. Ate a diabetic snack bar while watching everyone else eat Aggie ice cream. (Sigh.) The dancing began: Scott (my brother) danced with Jenni while the groom danced with his mother, then Jenni and her new husband danced together. And then my left tear duct, the one that is scarred from a past infection, chose this moment to plug up on me, and my eye started leaking like a sieve. Still got some nice videos and pictures for the family.

Crashed on the sofa and did not wake until six the next morning.

Day 5 may be found here.