I awoke feeling somewhat better and found that my mother was the only other one stirring. She had, in fact, woken me up. Fine; I had a long drive to Monticello ahead.

I dropped my mom off in Provo, staying with her long enough to talk a bit more and to fry up some breakfast. Then I headed on to Price Canyon. Here I  paused for a photograph for the book. 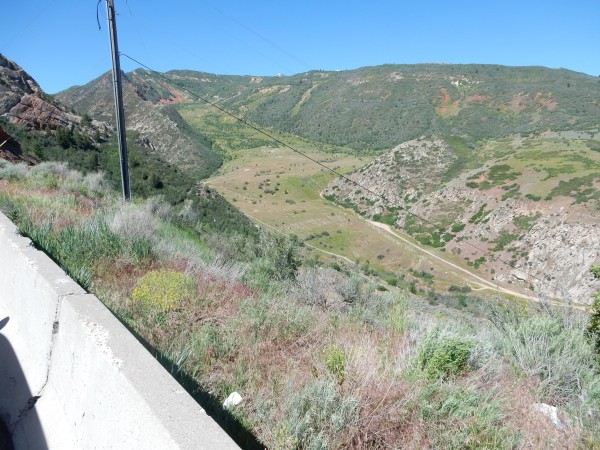 The flat, valley-like feature is the surface of the Thistle slide, an earthflow on the flank of Price Canyon. In April 1983, after becoming saturated with water during a very wet winter, the slide became mobilized and the toe of the slide slowly filled he canyon floor, lifting and destroying the highway and the nearby rail line, and creating a lake that flooded and destroyed the little town of Thistle. There was some debate about whether to try to stabilize the slide to create a permanent lake, but ultimately culverts were installed to drain the lake and the road and rail lines were rebuilt at a higher level.

I don’t normally include non-Jemez photos in the book, which is about Jemez geology, but sometimes they’re useful for illustrating concepts. Similar earthflows in White Rock Canyon produced lakes north of the canyon in prehistoric times.

From there through to Price and beyond, with a stop for my midmorning snack. 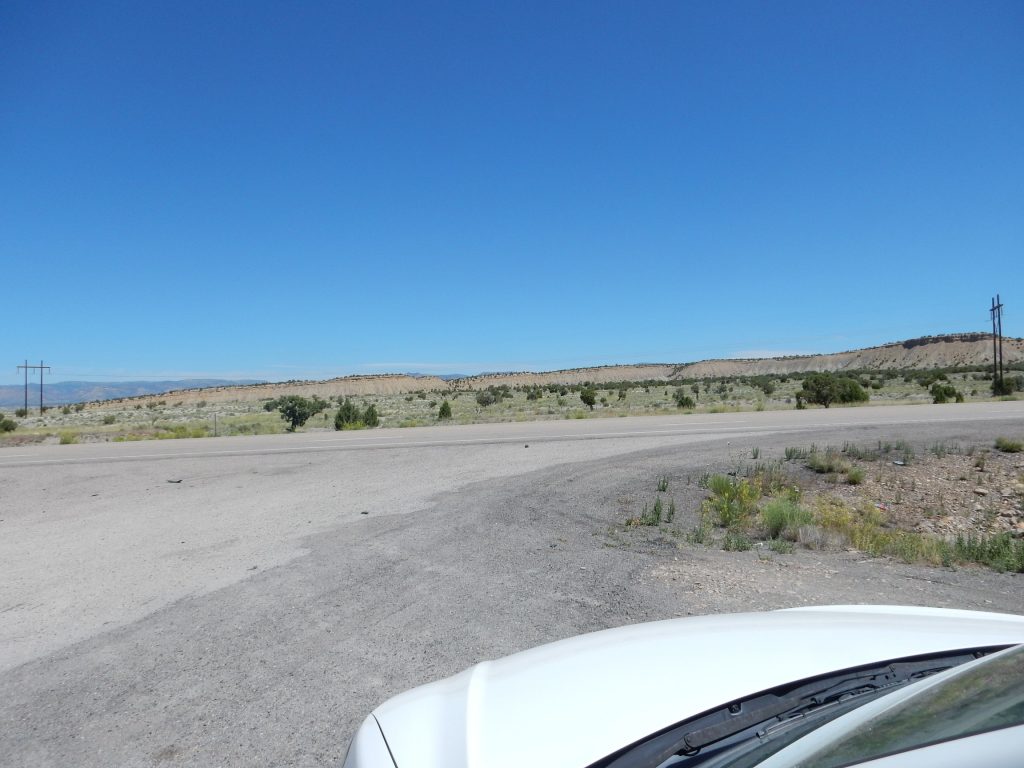 The bluff is capped with Ferron Sandstone Member, Mancos Formation, on top of Tununk Shale Member, Mancos Formation. Both were laid down in a shallow ocean, the Western Interior Seaway, during the Cretaceous, about 90 million years ago. The Western Interior Seaway flooded the central part of North America at that time. The sandstone is likely a beach deposit.

Somewhere south of Price I spotted a roadside sign: DINOSAUR QUARRY. Well then. There was a kiosk with some information: 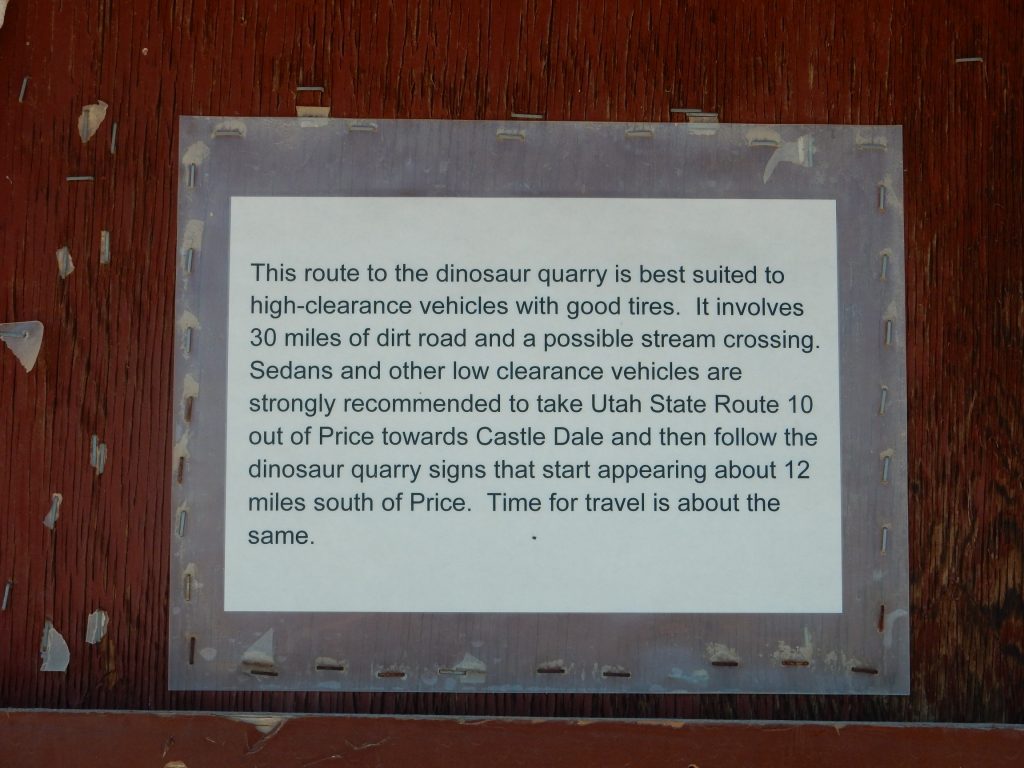 Some other trip, then.

The road passed through what looked like a pediment surface with some impressive pediment gravels. Alas, it was a busy highway and there was no safe place to pull over. The best I could do was photograph the pediment off the highway. 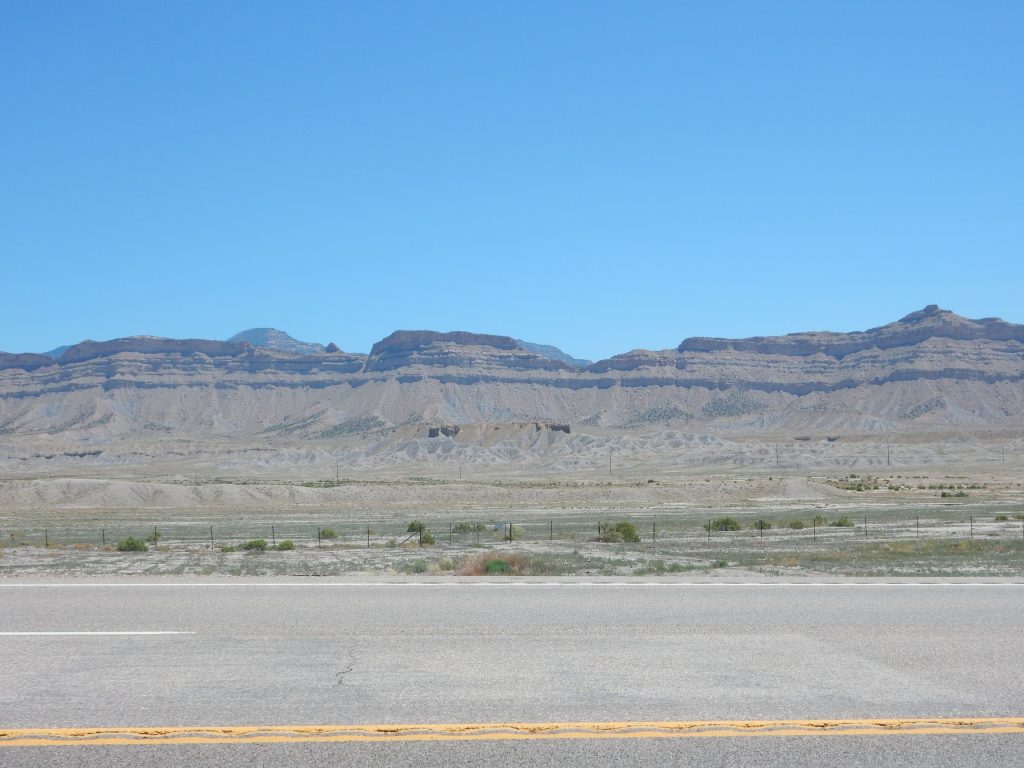 This doesn’t do it justice.The pediment is the low surface in the foreground. Pediments form in arid climates where a highlands is being eroded back, producing a very level, very gently sloping surface in front of the eroding highlands. This is typically covered with a veneer of gravel eroded off the highlands.

In the background are the Book Cliffs. Alas, I have no geologic map for this area to more precisely identify formations, but further south the Book Cliffs are mapped as Castlegate Formation over Blackhawk Formation, both Cretaceous in age.

I reached Green River, topped off my gas tank, dumped some other fluids I had no further use for, looked for some lunch (nothing promising; I raided my diabetic bars again) and headed west towards the San Rafael Swell. This is an upwarp, or anticline, in the Earth’s crust. I pulled off the interstate for a panorama of the San Rafael Reef, the rugged eastern boundary of the Swell.

The Reef is underlain by the Jurassic Wingate and Navajo Sandstones. These beds, which resist erosion, have been warped upwards and then eroded through to form the hogback.

From here I proceeded south to Goblin Valley State Park, pausing for another panorama 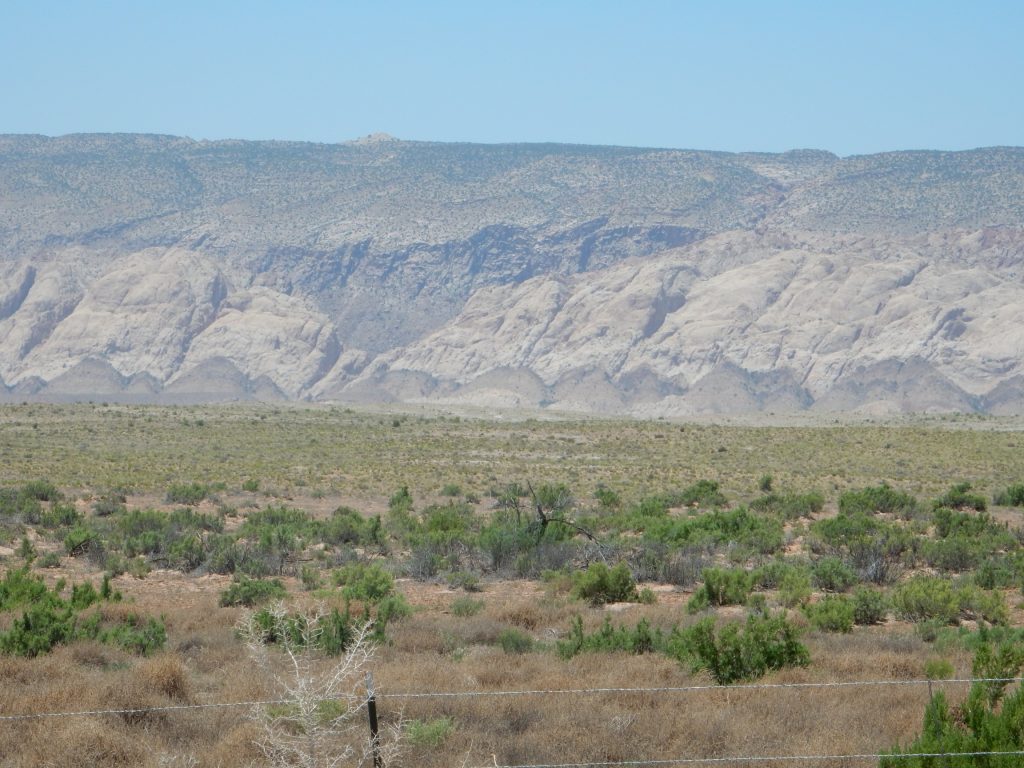 I don’t have a geologic map for this part of the Reef, but my guess is that the darker beds at the foot of the reef are Carmel Formation. This is found in other places between the Navajo Sandstone and the Entrada Sandstone. 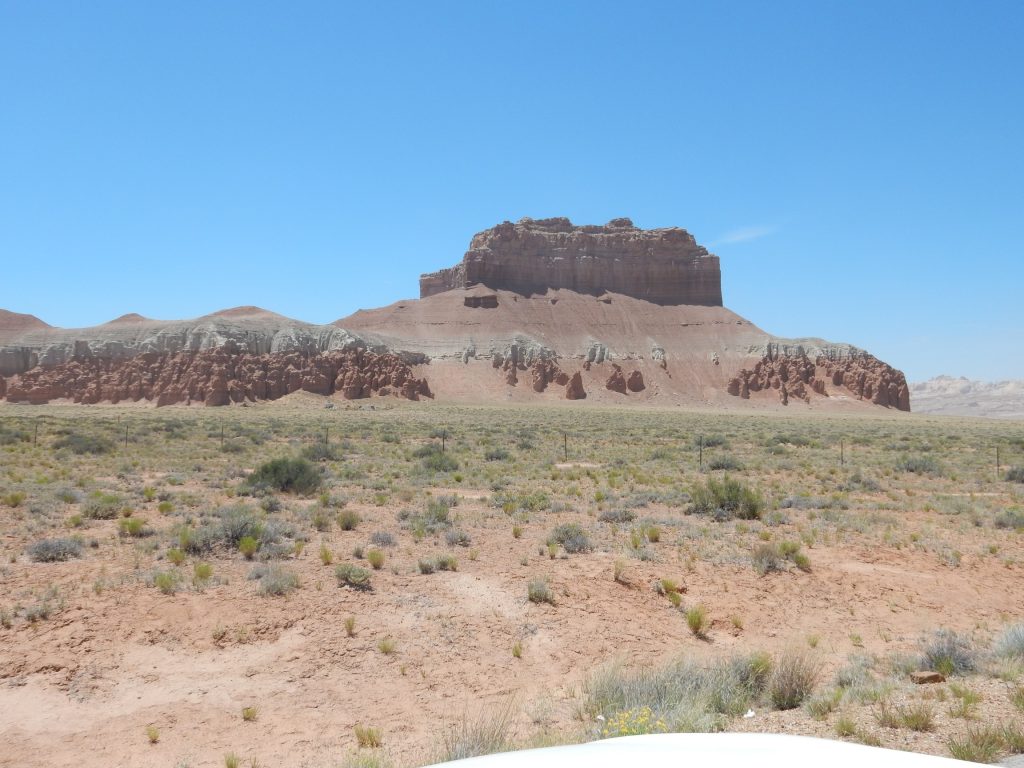 See no evil, hear no evil, speak no evil? 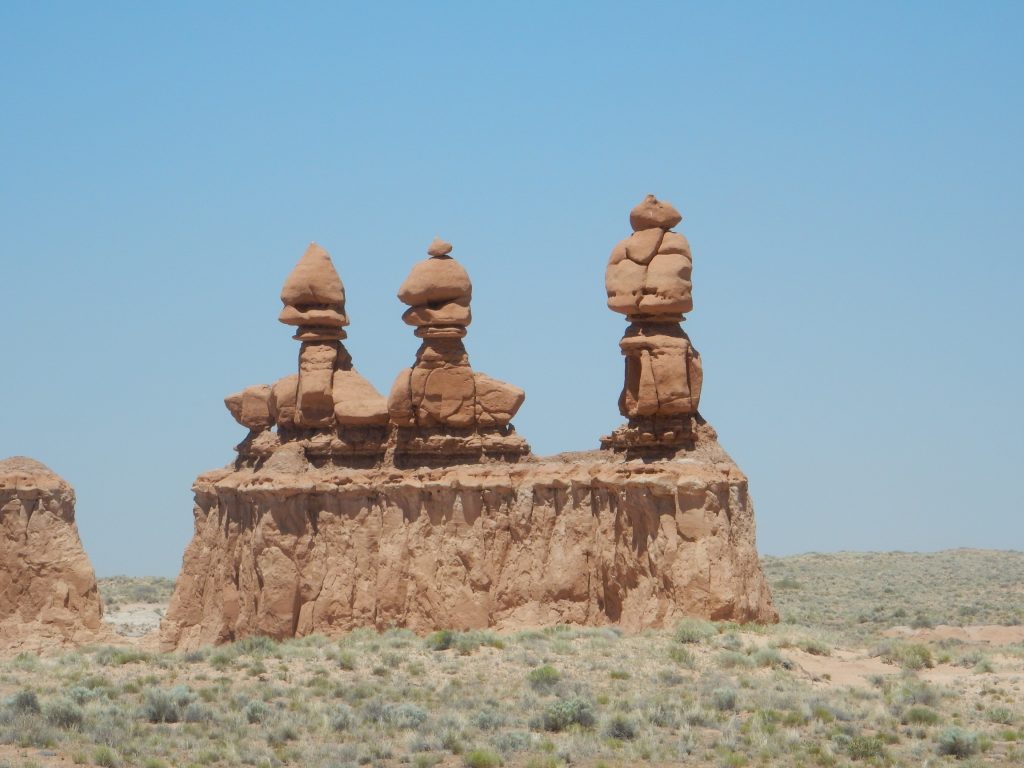 Goblin Valley. The wind was really whipping up and getting unpleasant at this point.

I climbed down the stairs to the valley, started another picture … and my batteries announced they were dead. Well, shucks, especially as I had left the spares in the car. Climbed back out. Got the batteries. Descended again. At least the wind wasn’t as bad in the valley.

For some reason, this reminded me of a Calvin and Hobbes cartoon. 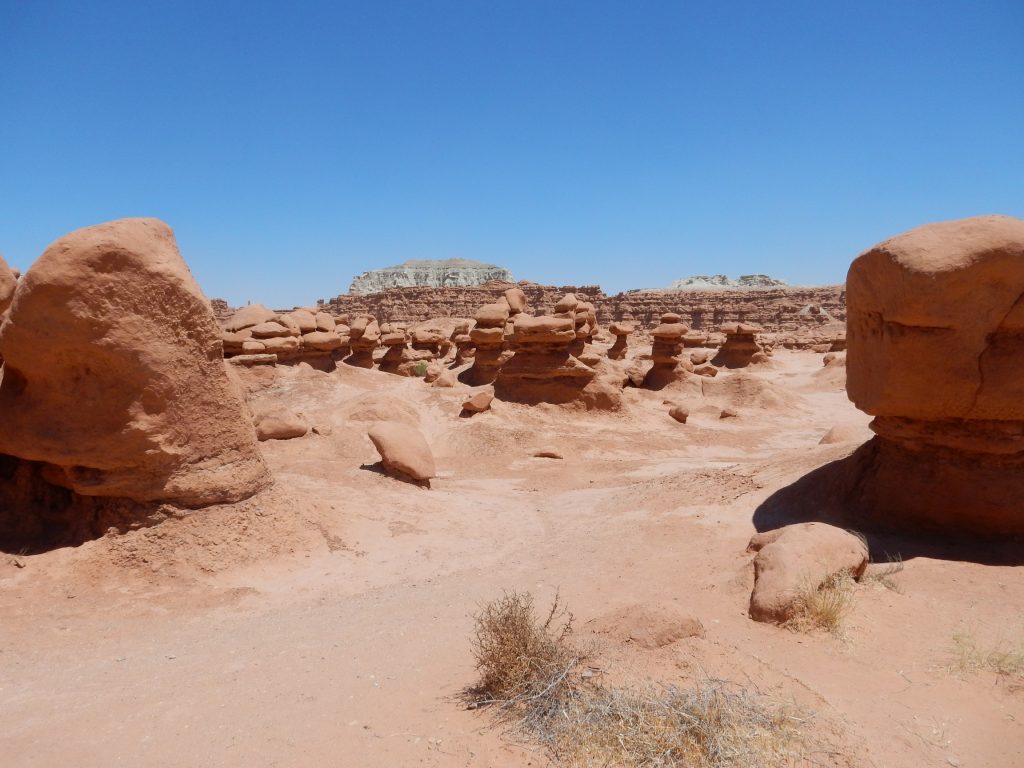 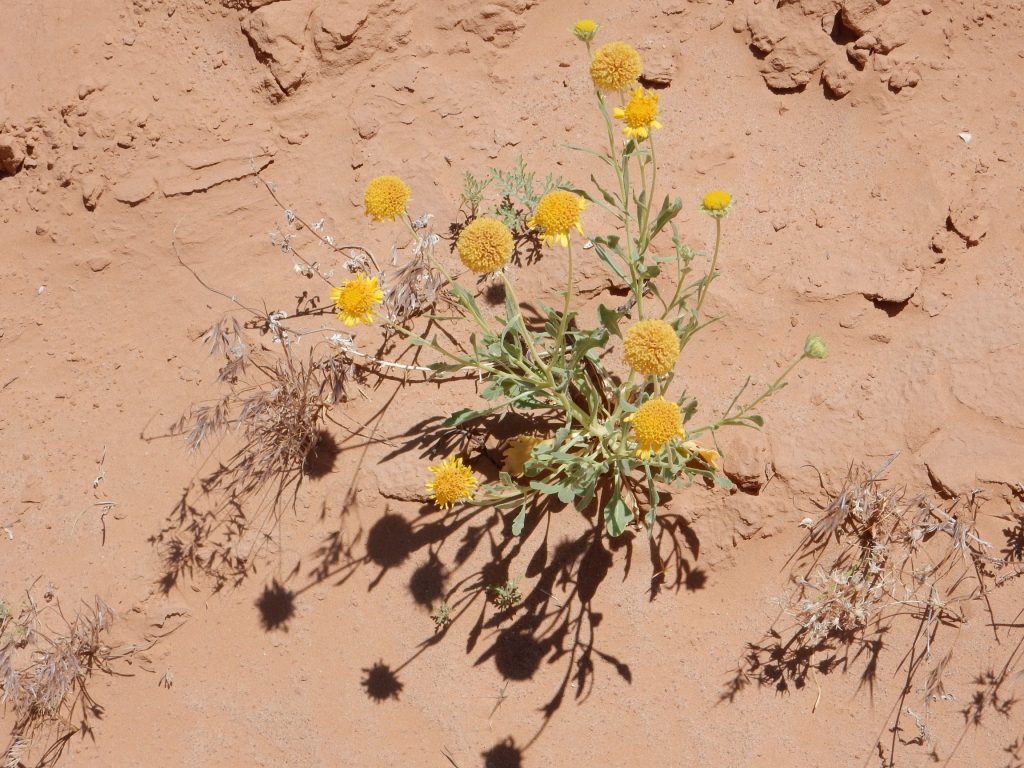 I headed south, towards a hill of Curtis Formation. 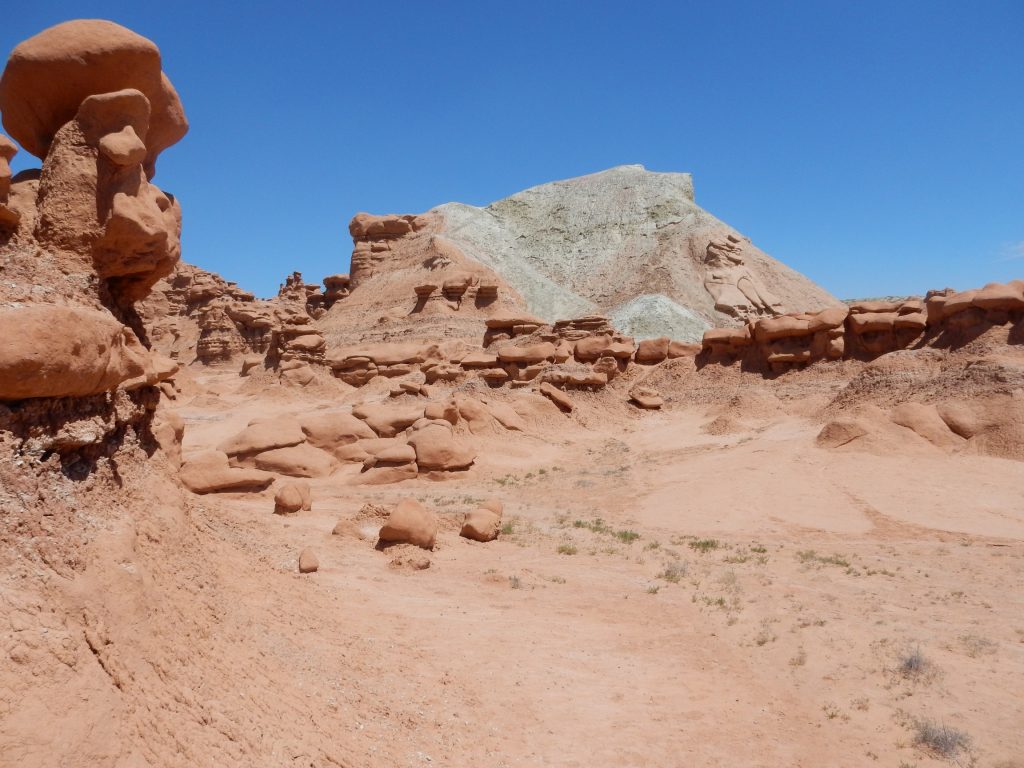 It looks like part of the Curtis beds slid down to the base of the hill. Taking a closer look: 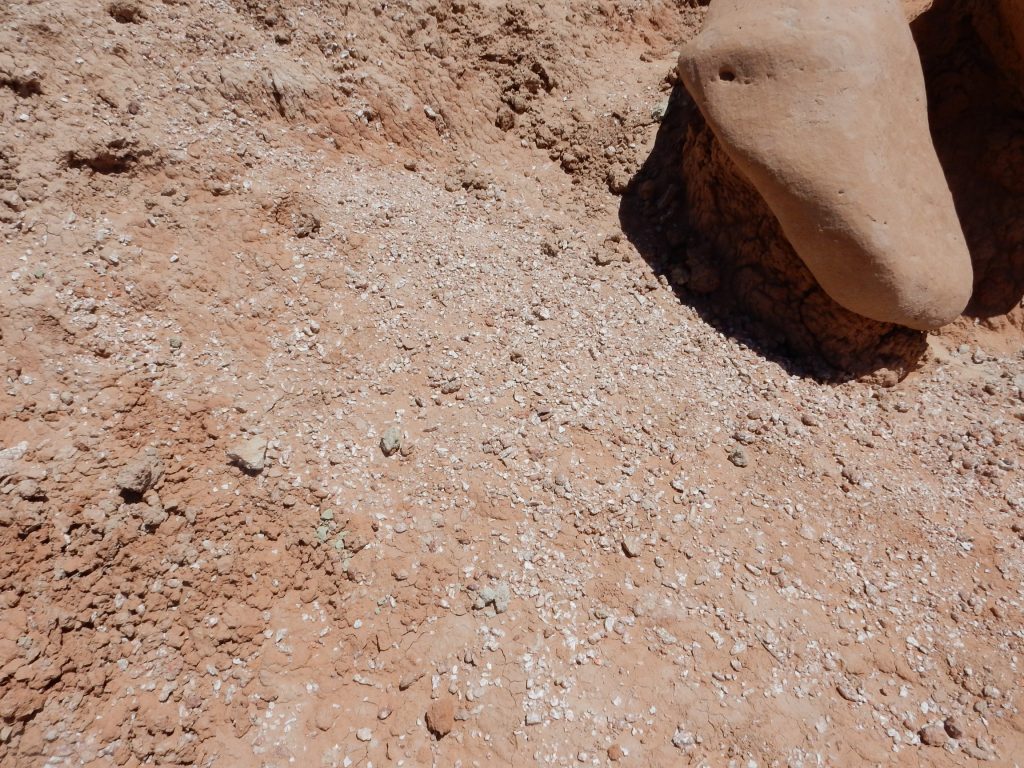 I cautiously tasted a bit of the white crystalline rock; no flavor. Gypsum. So the Curtis here is not only at the same stratigraphic position as the Todilto back home, but it’s rich in gypsum like the Todilto. 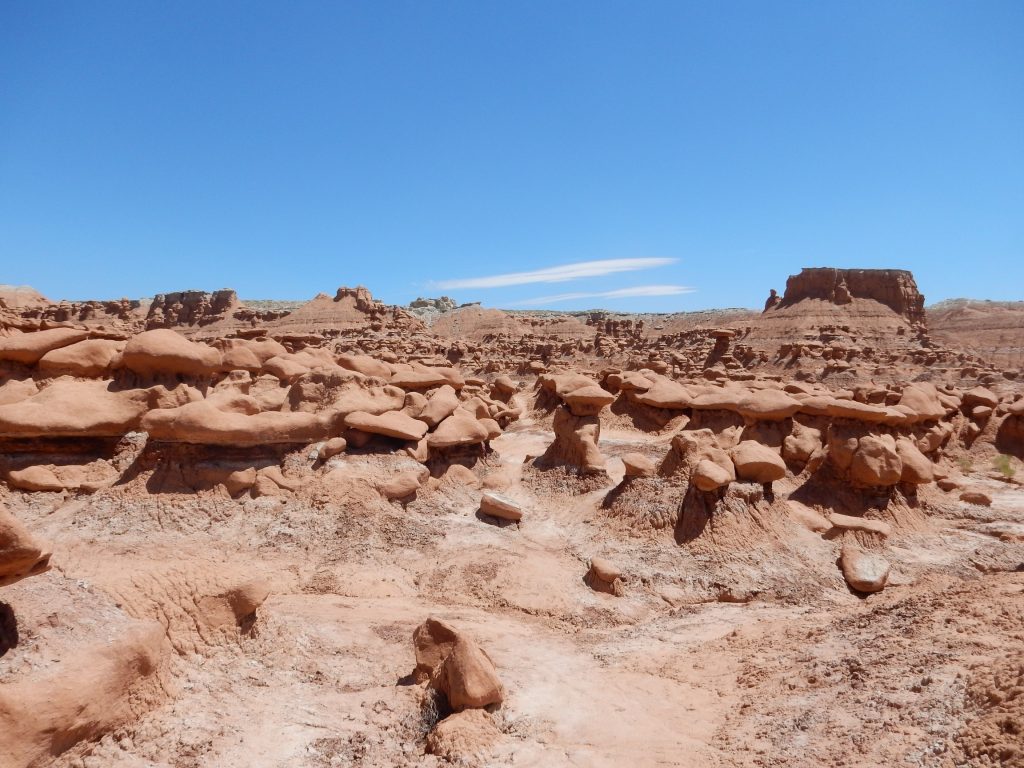 For some reason I got to wondering about the drainage. This valley looks like a bowl, but there’s no sign of a dry lake at the bottom. I found that there are arroyos winding south. 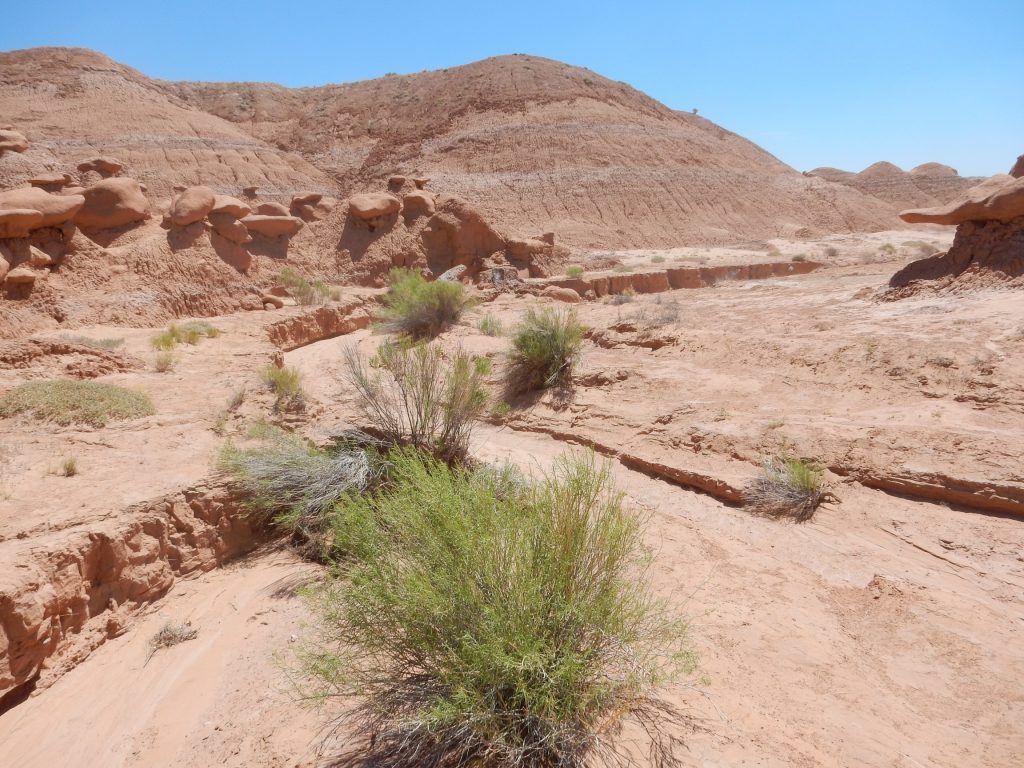 And here we get a good look at the Entrada Formation intact. It appears to be mostly poorly cemented here, with some ash beds, but the goblins apparently started as a layer of boulders within the formation. The softer sediments around them eroded away, leaving them on a pedestal of sediment.

I followed the arroyos for some distance, then figured I’d better be getting back. I found that I’d got around to where I’d either have to cross arroyos or retrace my steps, and the arroyos were deep. But first, a pan to the north:

The arroyo between me and the parking area was quite deep 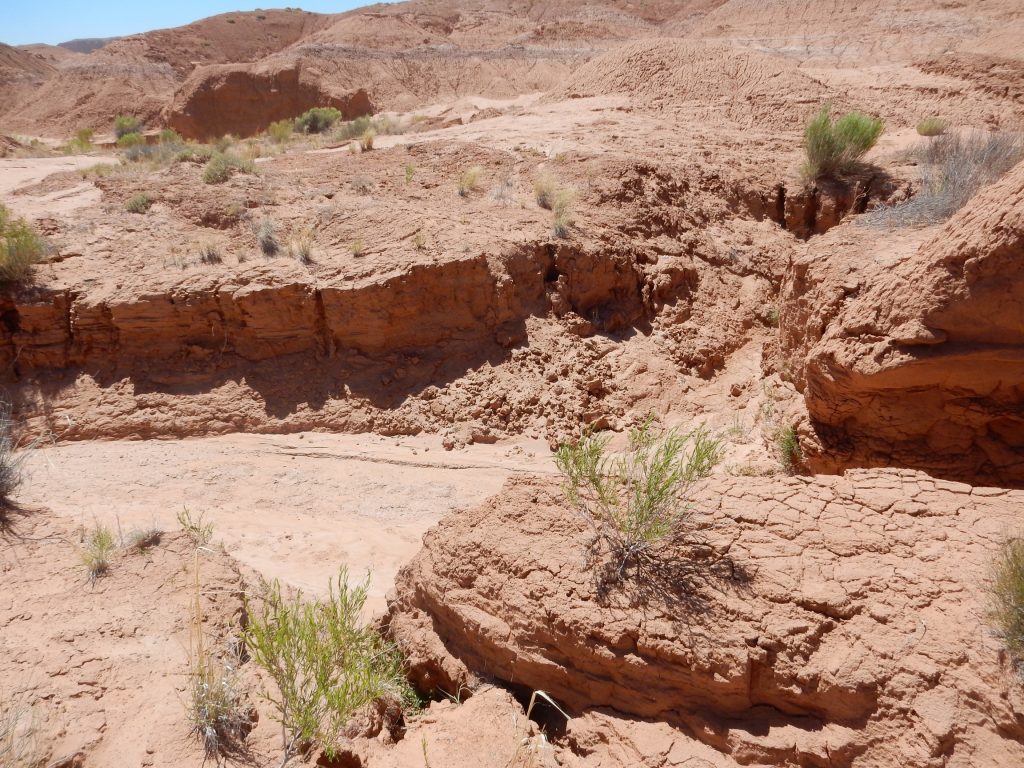 and I had to find a place where the wall had partially collapsed to get down into the arroyo; then work some distance along the arroyo to find a crevice where I could get back out. 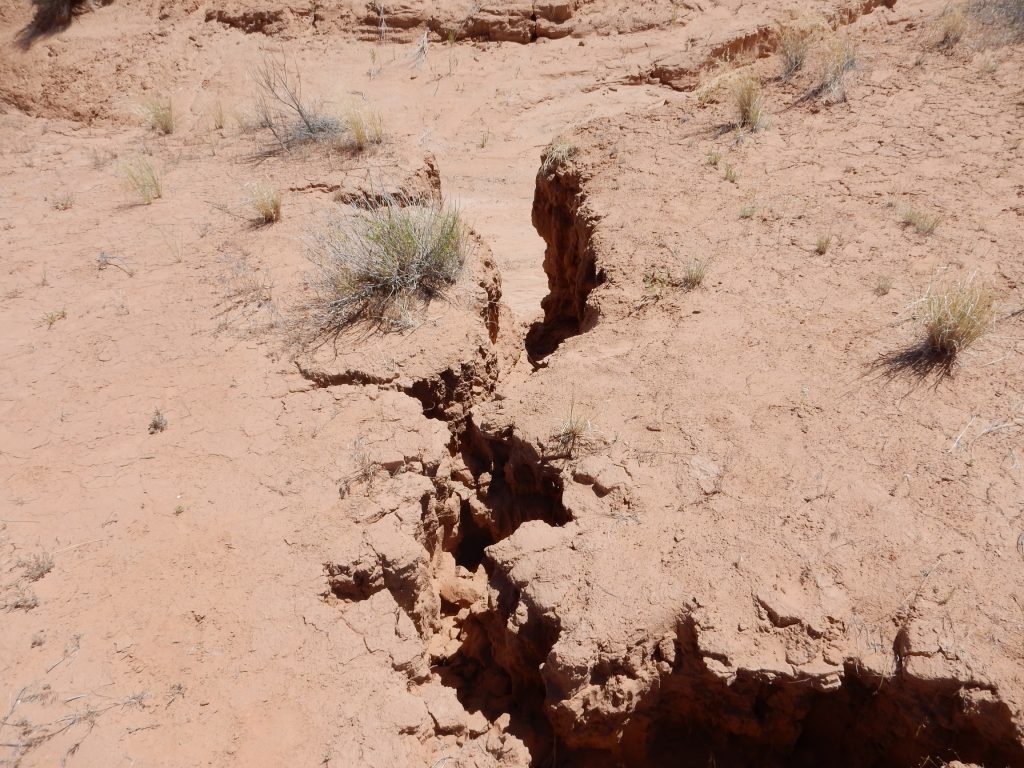 I found myself looking at a gravel bed within the Entrada Formation. 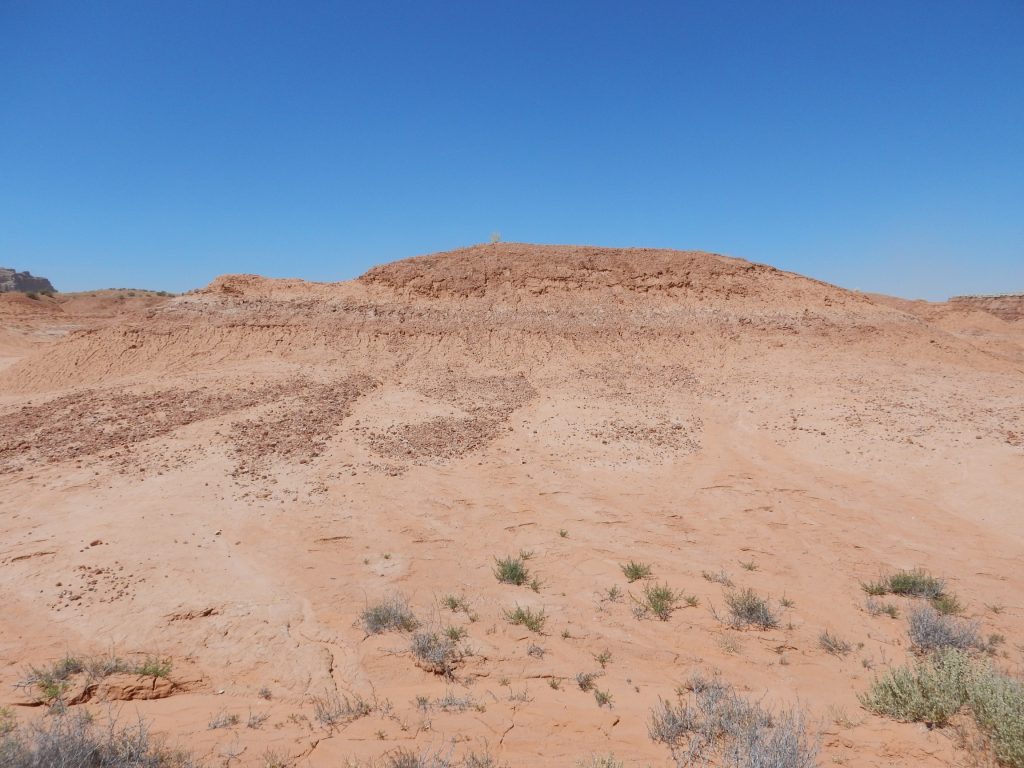 This got me noticing that the goblins petered out rather abruptly on the west side of the valley.

I looked for a fault trace, but there was no sign of one. I wondered if the beds might dip into the ground to the west, but the geologic map shows the beds remarkably flat — particularly remarkable so close to the San Rafael Swell. The boulder bed must simply “pinch out” to the west.

Got back to the car. I had considered continuing south to reach Monticello the back way, through the Colorado River crossing at Hite, but the ranger at the headquarters had discouraged this idea. I dunno; looks like awfully pretty country to visit sometime. But I took the advice and decided to head back through Green River.

But not before seeing the San Rafael Reef close up. 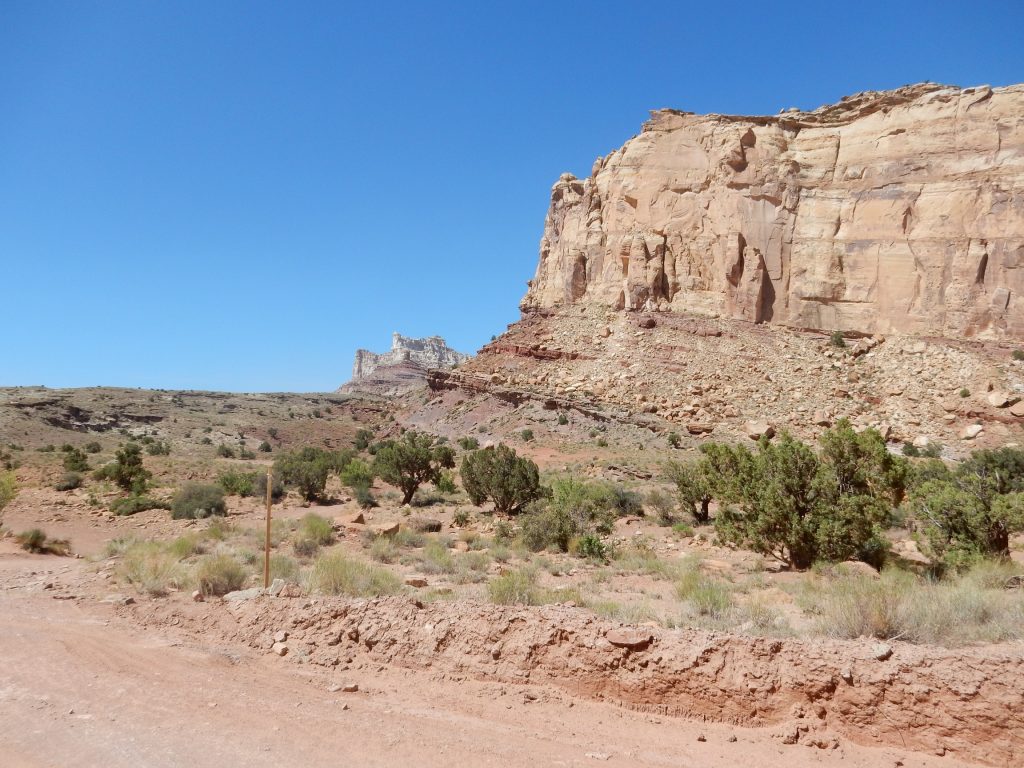 In the distance is Temple Mountain, composed of Jurassic Wingate Sandstone sitting on Triassic Chinle Formation. Both formations also underlie the canyon wall in the foreground, which is part of the San Rafael Reef, here cut by a canyon.  The upper part of the Chinle here is the Churck Rock Member while the lower part is the Owl Rock Member. The thin beds forming the rim of the canyon are Kayenta Formation. A short distance to the east we see the contact of the Kayenta Formation with the overlying massive Navajo Sandstone. 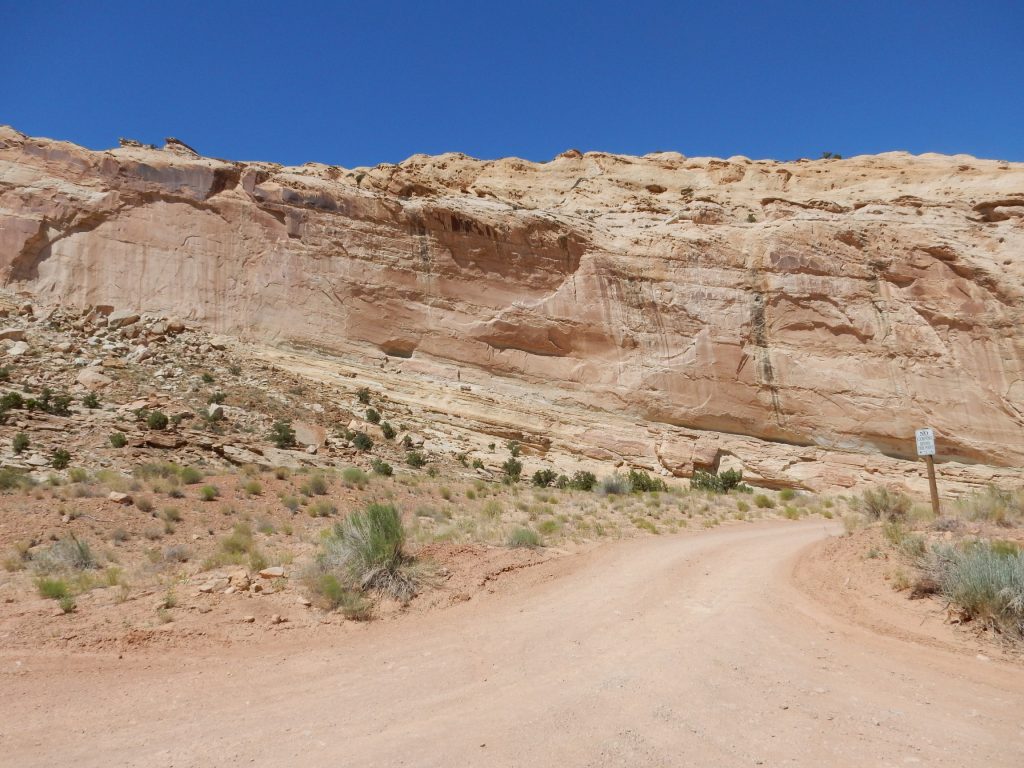 You know, I’m really tempted to drive that back country road to this area from Monticello, next time I come up (in August), and camp here. The camping area is first-come first-served, but I can’t imagine it fills up on a typical weekday night, and it’s free. On the other hand, that’s a long drive from Los Alamos.

The wind was still whipping, and the air was full of dust. I was certain coming in that I could see Island in the Sky, in Canyonlands, in the distance; now it was obscured by dust. I found a hill with a gravel road up it 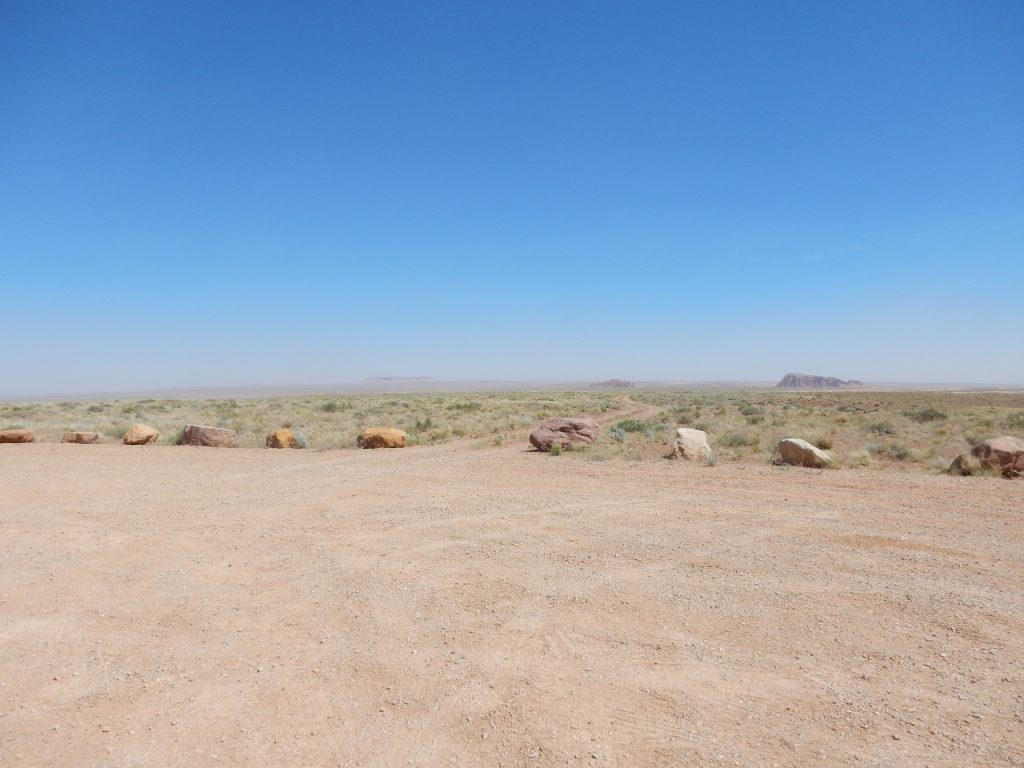 but the horizon was obscured. These are all relatively local mesas, here 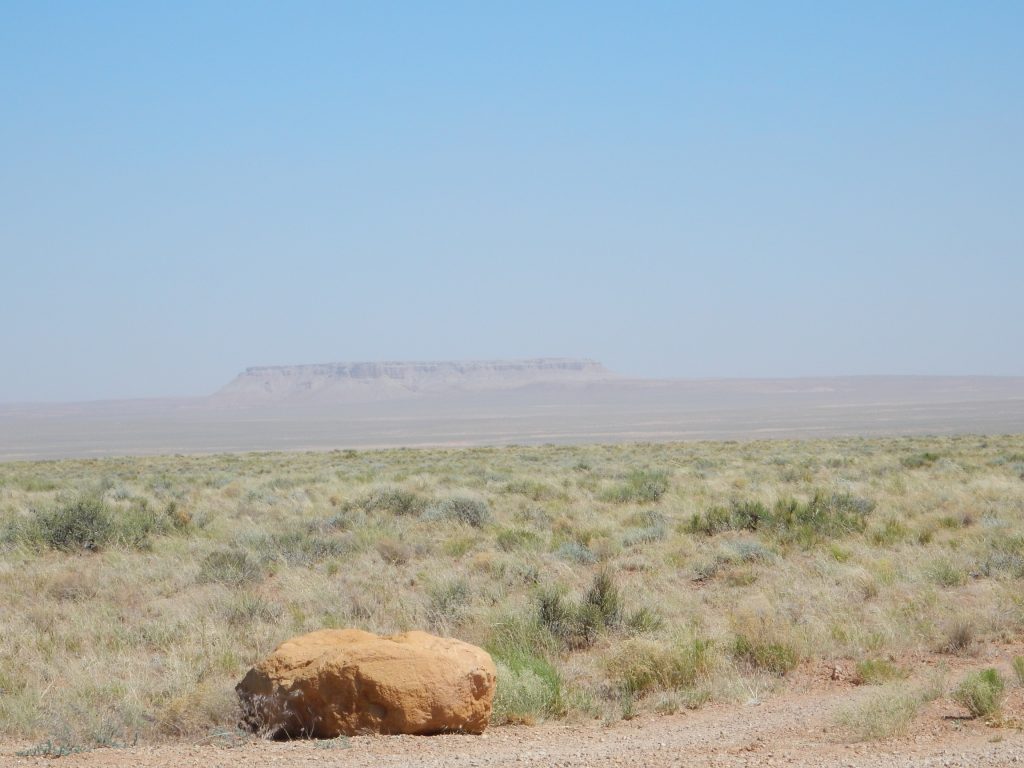 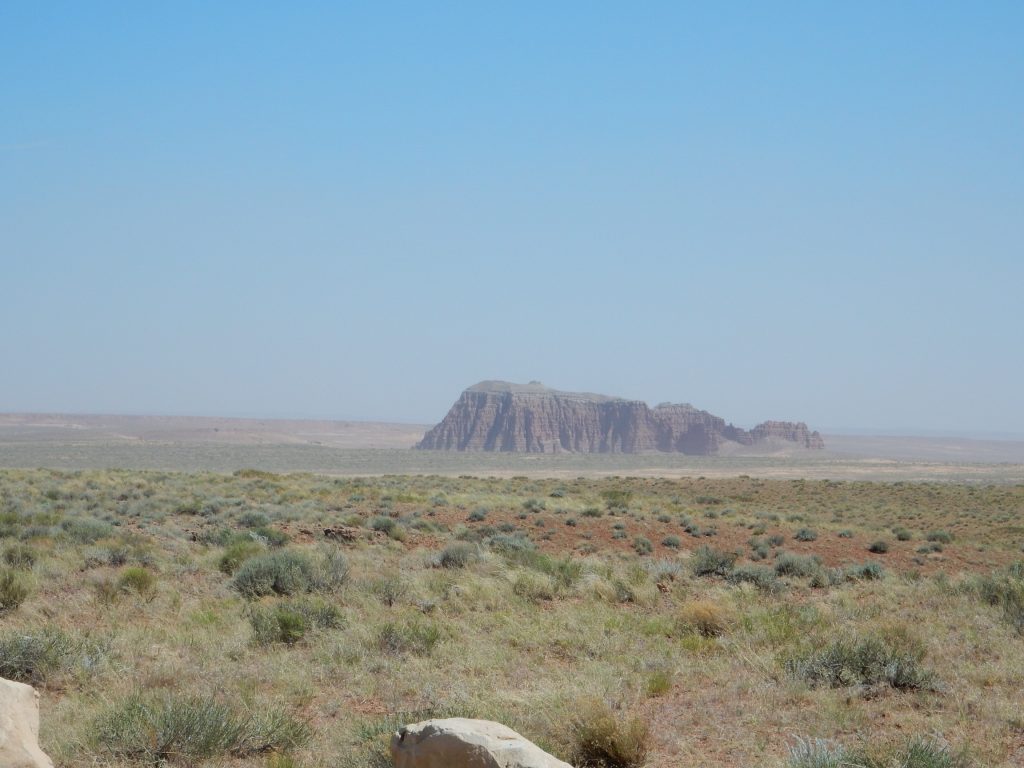 in the San Rafael Desert.

I returned to Green River and headed to Moab. North of Moab there is a nice view down the Arches anticline; possibly one for the book. 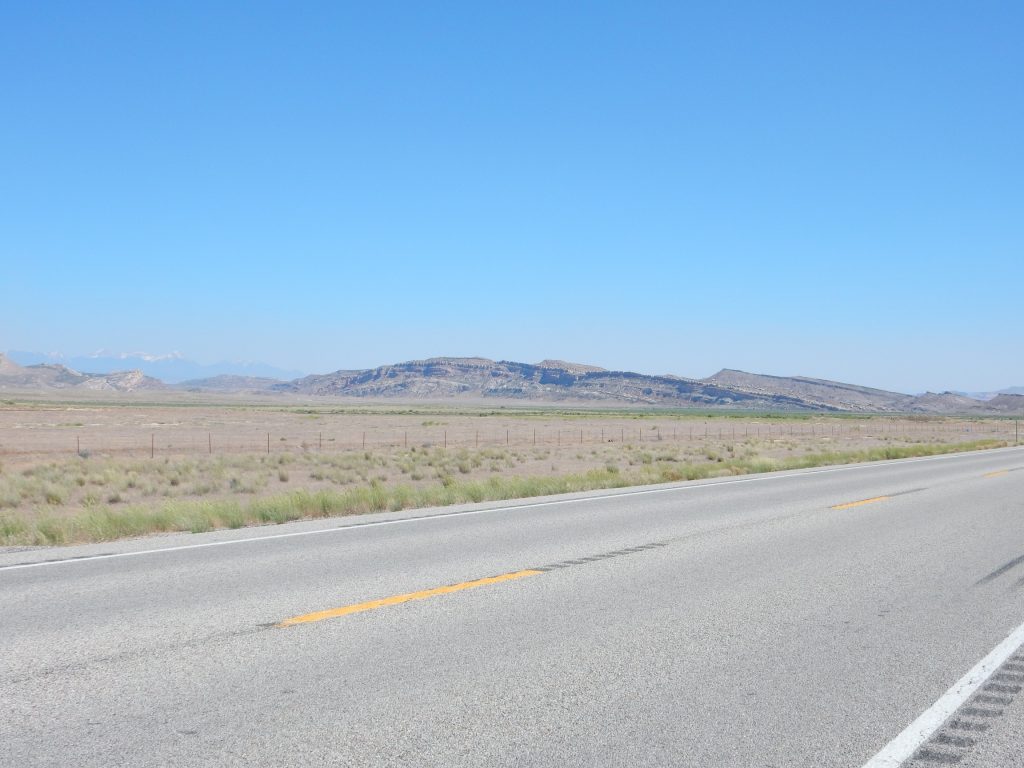 I decided to stop in Moab for a decent meal, and found a Szechuan restaurant was was pretty good. I did not think about the fact that, dining alone, there would be no one to give my rice to, and I neglected to ask that very little rice be brought out with my meal; I’m afraid I wasted the better part of a big bowl of rice. I ate just as much with my Kung Pao chicken as I thought my pancreas could take. On the bright side, it was probably the best ethnic food I had the whole trip, and the place was full of Asians, a possible sign of authenticity.

I headed back to Arches, thinking I had just time to see some geology. About all I managed before the park closed (early, due to road work) was a couple of shots of the Park Avenue area. 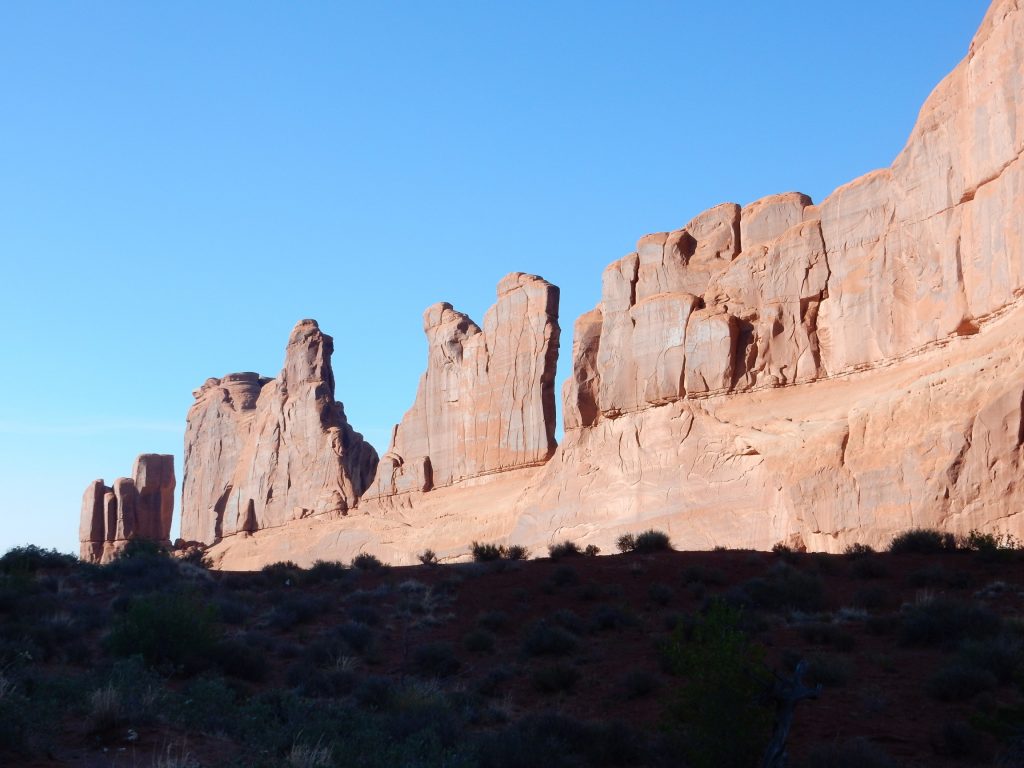 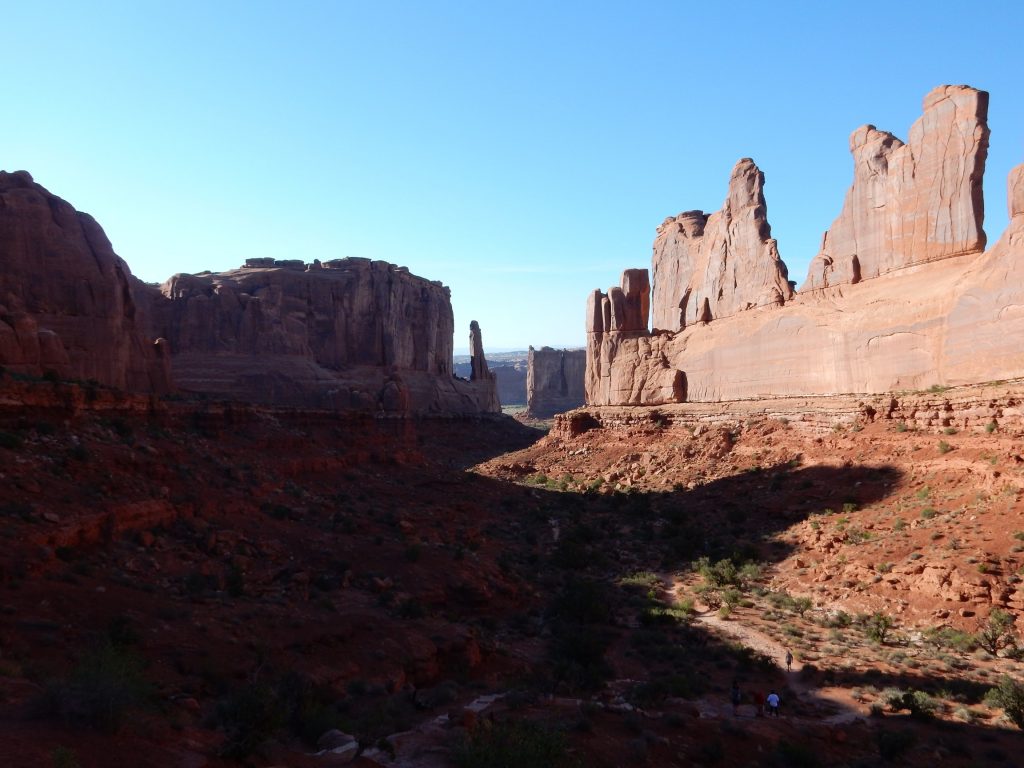 Too many shadows in the second photograph. I would do better in the morning.

I drove another hour and a half to my camp in Monticello, in the very same parking spot I had used coming up. Because it was so windy, I decided to try sleeping in the back of the Wandermobile rather than trying to set up my tent. I think this could actually work, with a little more preparation to get the air mattress right, but this time it was a slightly restless night. I probably want to figure out a way to screen the windows so I can leave them open in hot weather without being eaten alive by mosquitos.

Day Six may be found here.