Day 9 may be found here.

I awake, fix my usual camp breakfast, and do my best to clean myself up. I had been shaving every morning, but there are no facilities here for showering; I make do with a kind of sponge bath and put on my remaining change of clean pants, white shirt, and tie. I plan to attend church at the Island Park Ward then have a fairly quiet rest of the day.

I arrive somewhat early, and ask one of the ushers if it would be all right to plug into one of the outlets in the hall. He not only permits it, but promises to help keep an eye on my camera while I’m paying attention to the meeting.

I look for Jeremy Conlin from back home, who I plan to meet at Rexburg for the eclipse. I’m a little worried if he can actually get in on my reservation; I’m thinking the reservation form asked how many would be in my party, and I’m not sure I put down anyone but myself. I never do spot him; it turns out there is an annex with video link to the service and  I find out later he was there.

The announcements include that this is the tourist service (I already knew that) and that the regular service will be limited to Sacrament meeting (no Sunday School or Priesthood/Relief Society meetings) due to the “purported” flood of tourists. I don’t get the sense the crowds are as large as the locals were expecting. And gas prices are still steady.

Soul and camera recharged, I head out and drive down to Mesa Falls. There is apparently some kind of bicycle race going on; we are stopped for several minutes while bicyclists bedecked with numbers bicycle out of the overlook area. Finally I get in, find a place to park, and walk the trail to the falls. 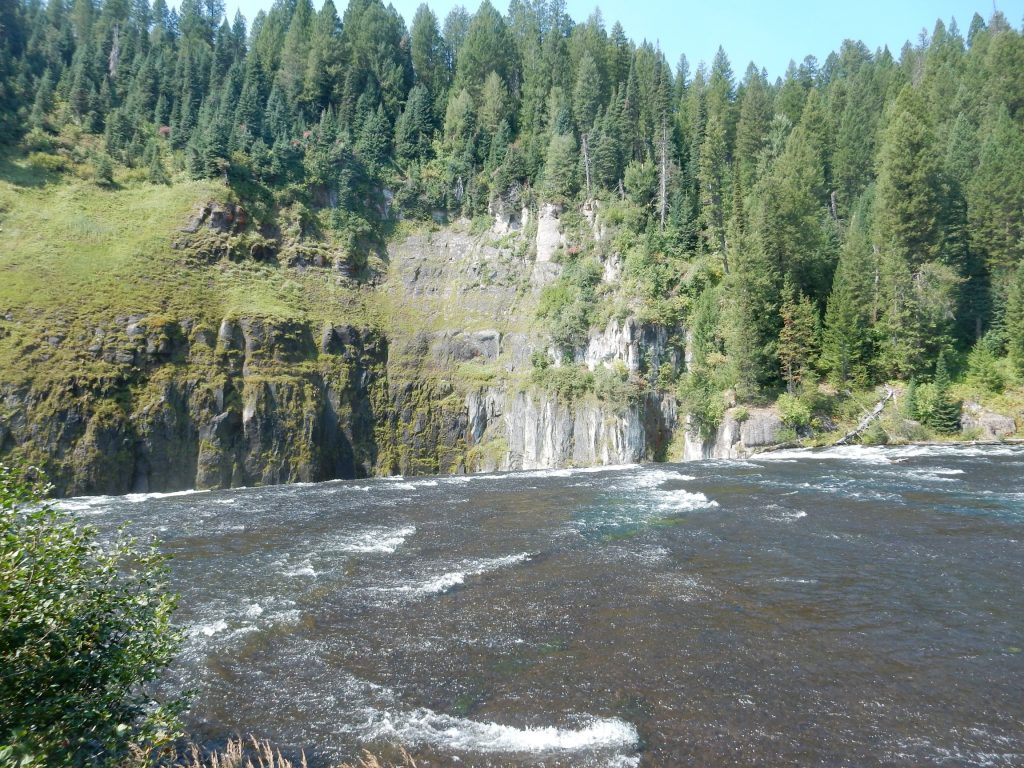 Mesa Falls is in a canyon cut in the Mesa Falls Tuff. The lip of the fall is a particularly resistant bed, probably densely welded.

I walk down to the lower overlook. 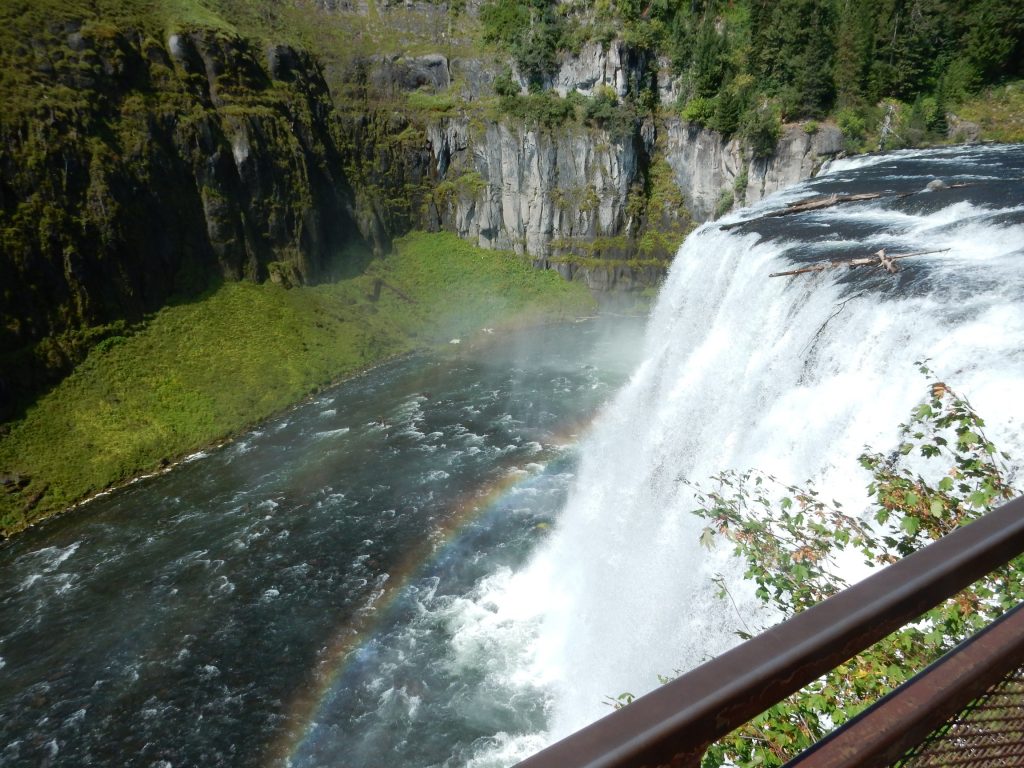 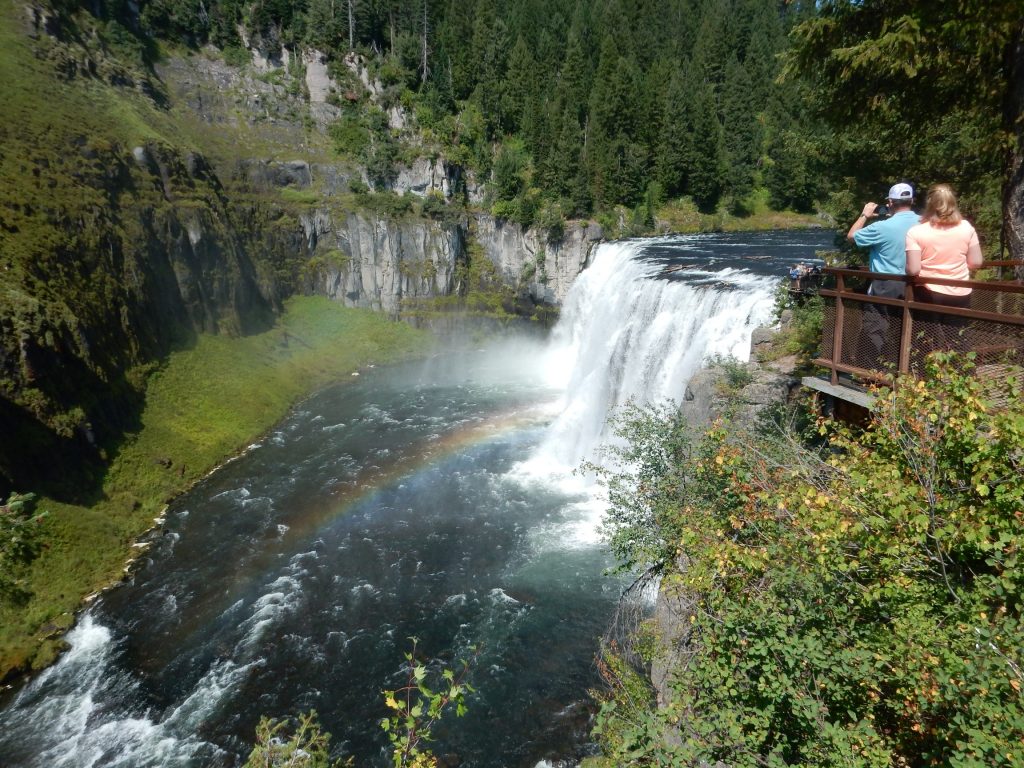 It’s a beautiful area, and I linger to eat my lunch. I then drive down to the lower falls.

There is still some smoke in the air, but today it highlights the forested ridges along the caldera rim. 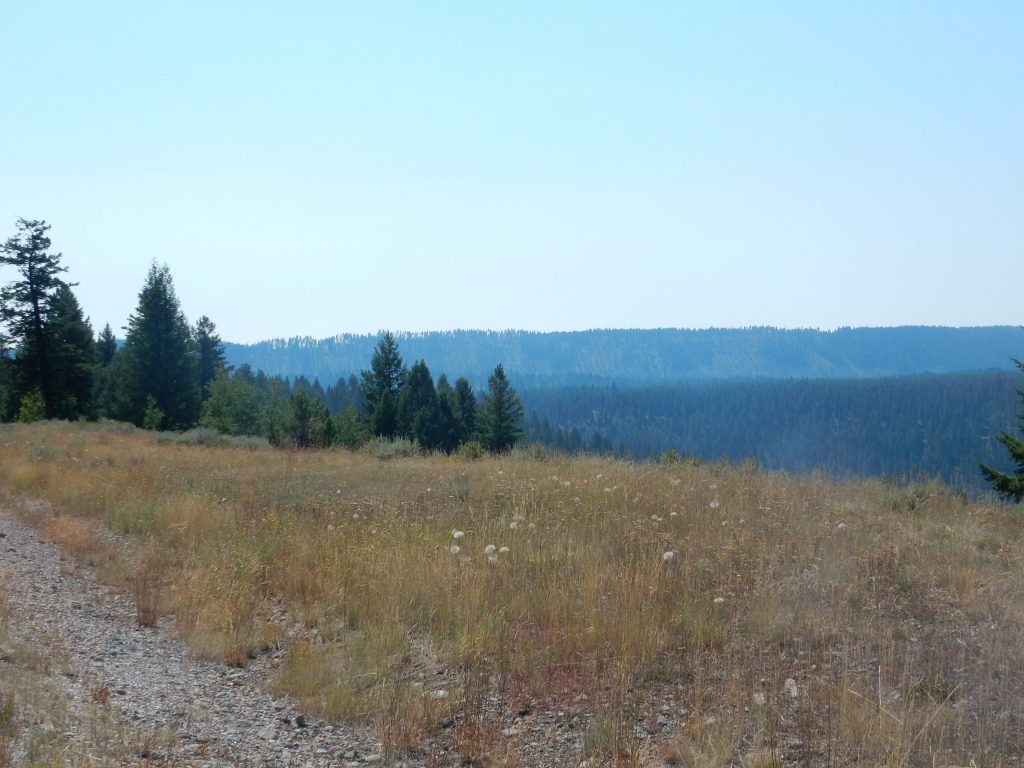 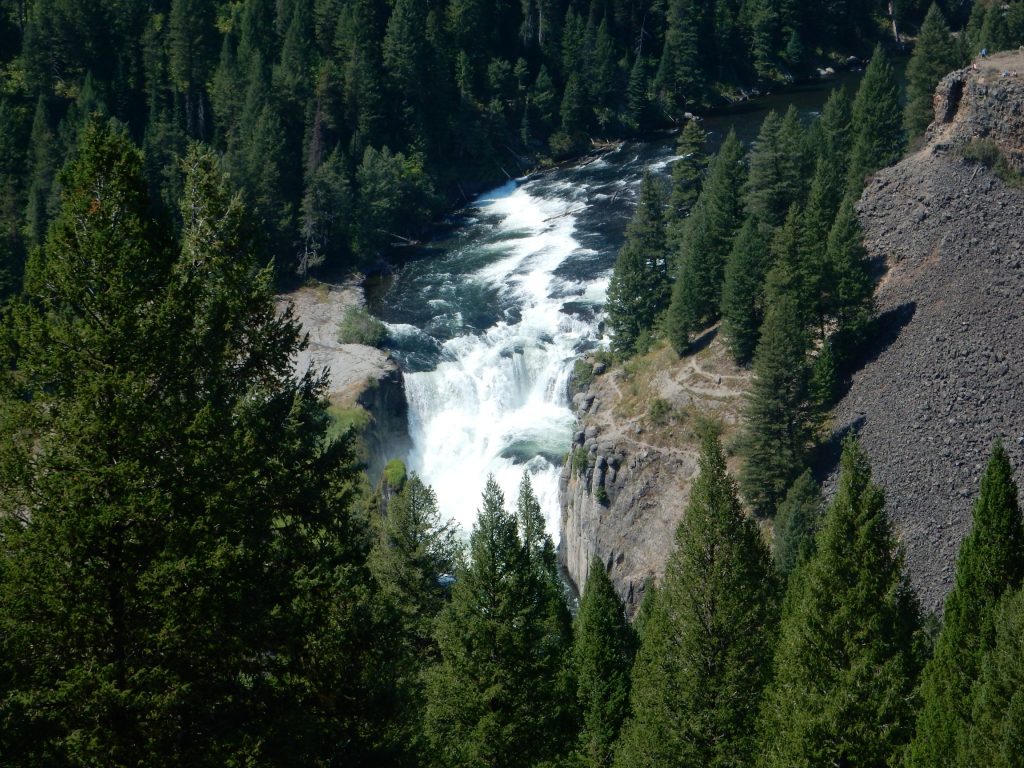 There are people down in the canyon on the trail visible here. I look for the trailhead. There’s a trail south of the view area, but that’s the wrong direction. Another seeming trail from the parking area is unmarked, and peters out after about fifty yards. Another trail heads north; I meet other hikers and find that it simply goes back to the upper falls parking area. Apparently the trail to the lower falls originates at the upper falls parking area as well. I don’t care to hike that far today.

I talk with Cindy on the phone. I report that crowds seem less than expected and gas prices seem stable, and I may take a drive to the northwest corner of the park, where I’ve not been before.  She reports the weather forecast for tomorrow for Rexburg is still very favorable, that east Oregon is still a madhouse, and warns me to keep topped off with gas.

I drive to West Yellowstone and take the road north, which cuts through the northwest corner of the park. I drive some distance before coming to any notable outcroppings, and in any case, my road guide goes the other direction and I figure on taking most of my photos coming back. But I do take one photograph. 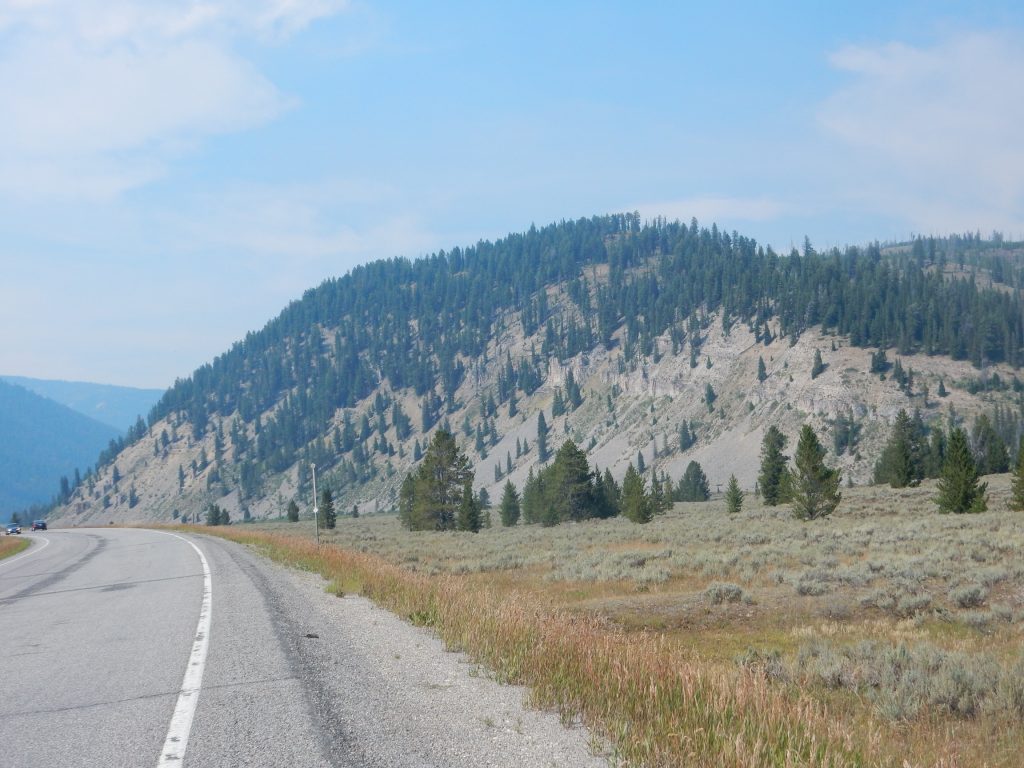 The beds exposed in the mountain are Mississippian Madison Limestone. This is similar in age and character to the oldest Phanerozoic formation in northern New Mexico, the Arroyo Penasco Group.

Almost to Big Sky, my return point, but this was too good to miss. 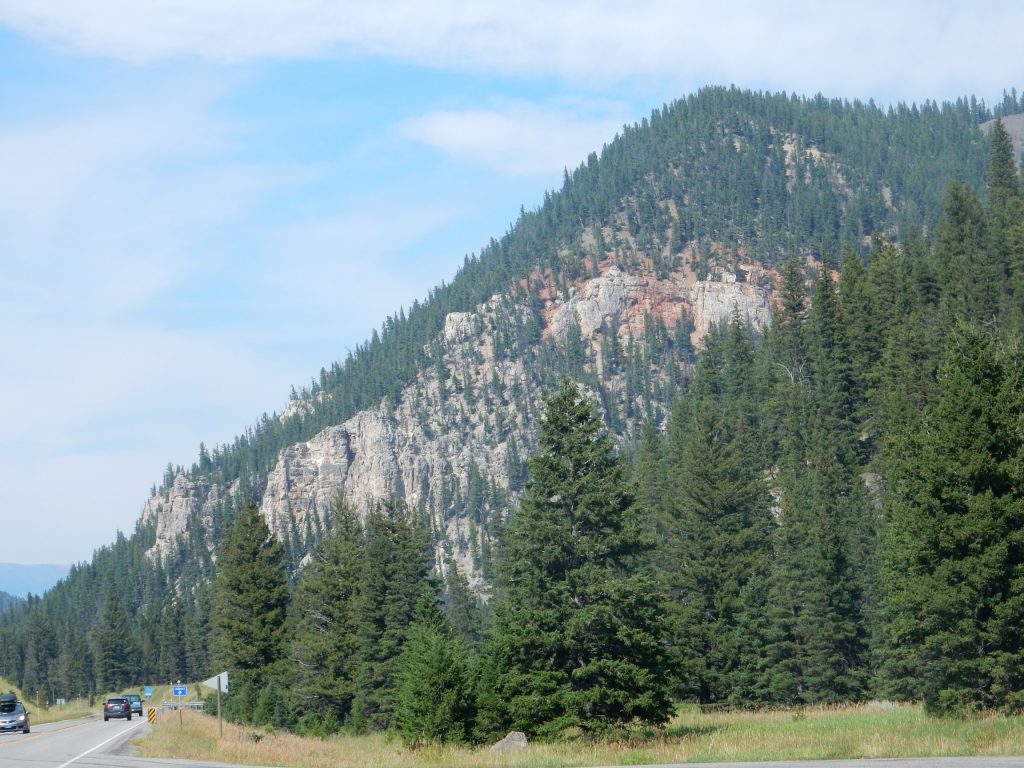 I don’t have a good geologic map for this area, but I’m thinking the red beds may be the Triassic Chugwater Formation, which roughly corresponds to the Chinle Formation closer to home. It’s a very distinctive red formation through the Wyoming area.

And I’m now north of 45 degrees latitude: Closer to the North Pole than the Equator. This is not the furthest north I’ve been. London is considerably further north, and my flight crossed over Iceland (though that hardly seems to count). But it feels like I’m far north, somehow.

I reach Big Sky and turn around, but not before photographing some more (presumptive) Chugwater Formation. 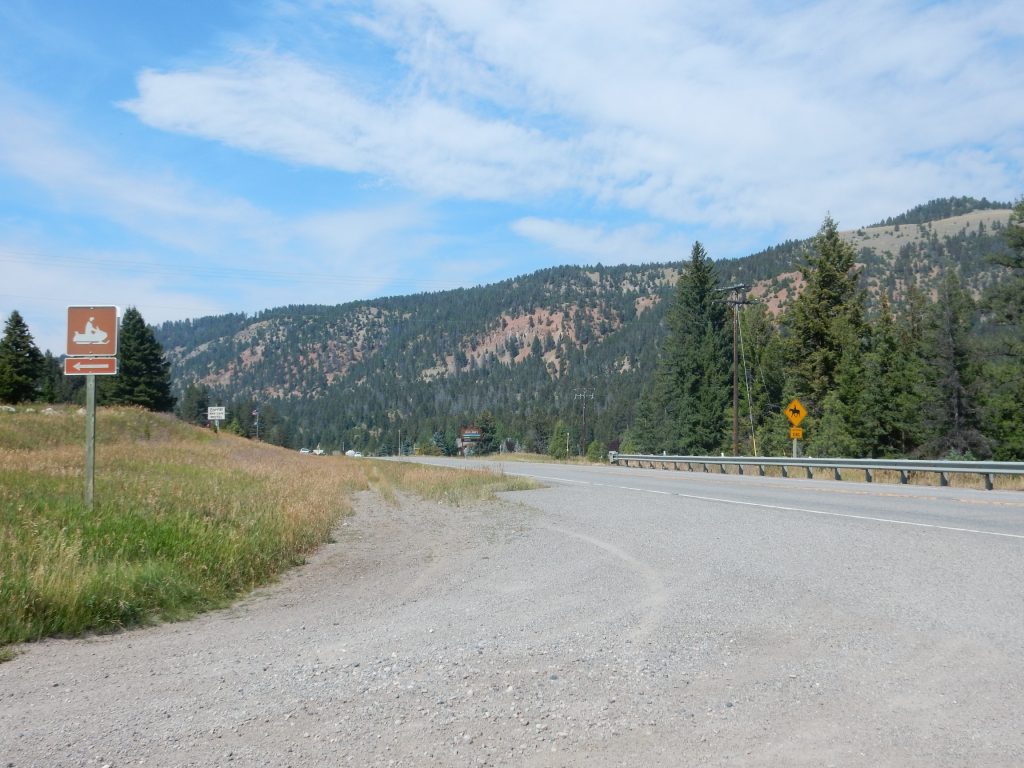 On the way back, there is an impressive road cut in the Madison Formation. I pull over. 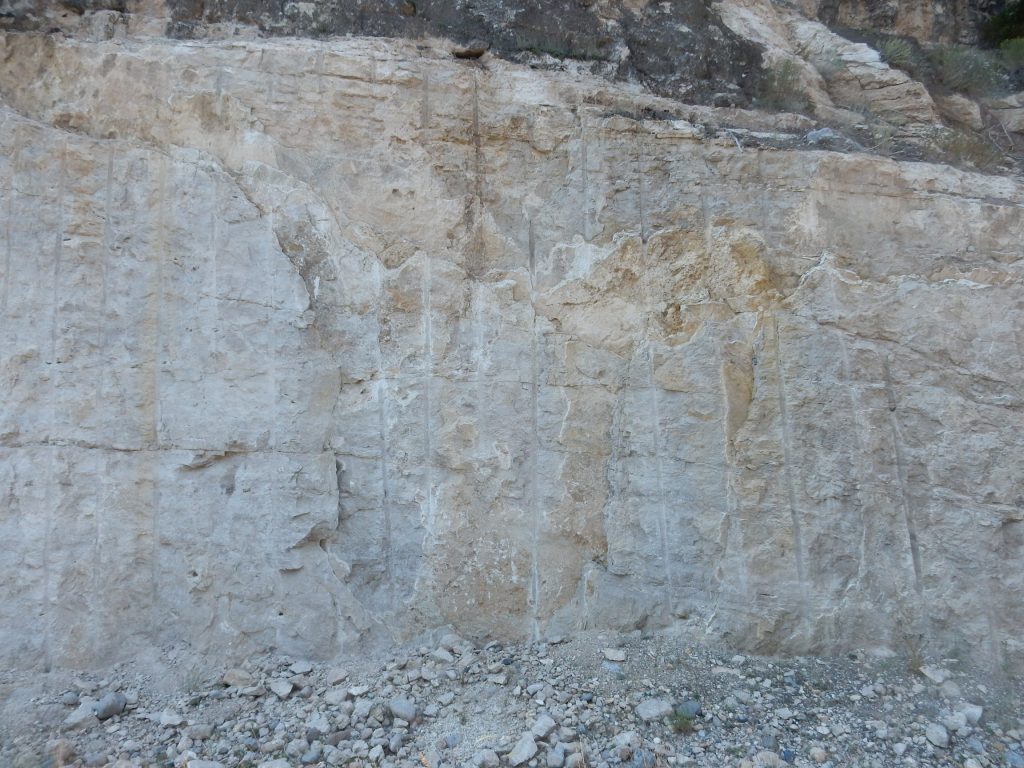 The limestone is almost uniform, except for a few crystal-lined vugs. 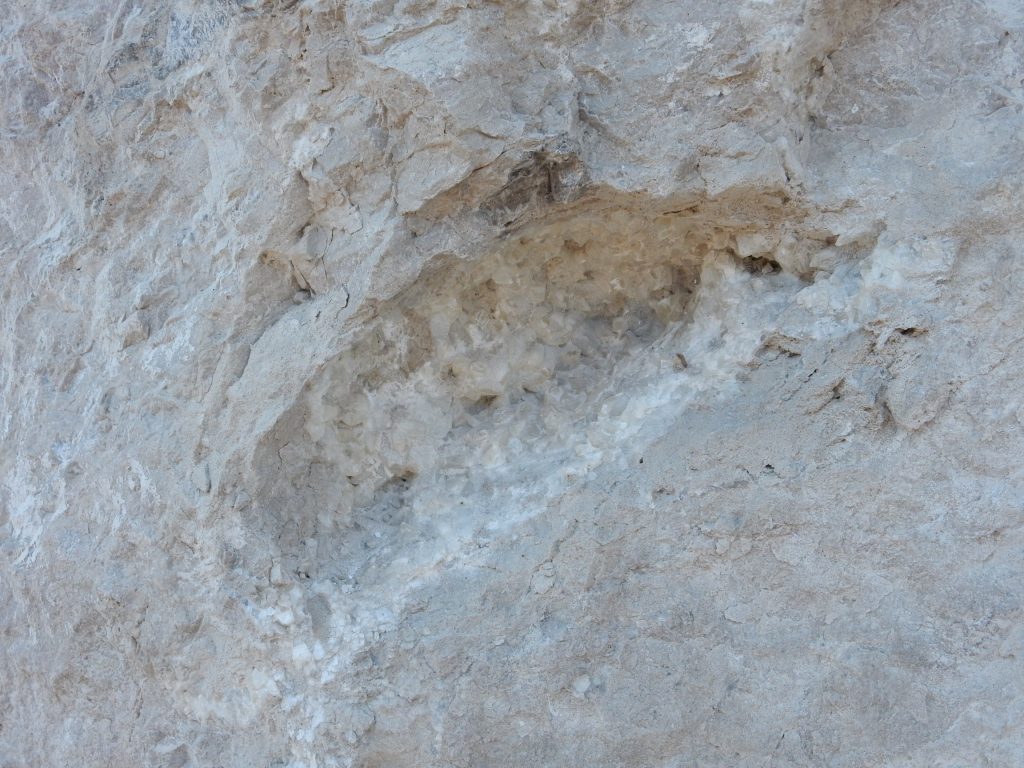 This is outside the park; I grab a shard from below the cliff for my collection.

I scrutinize the face of the road cut. There are no visible fossils. However, one of the shards, probably from further up the cliff, is interesting. 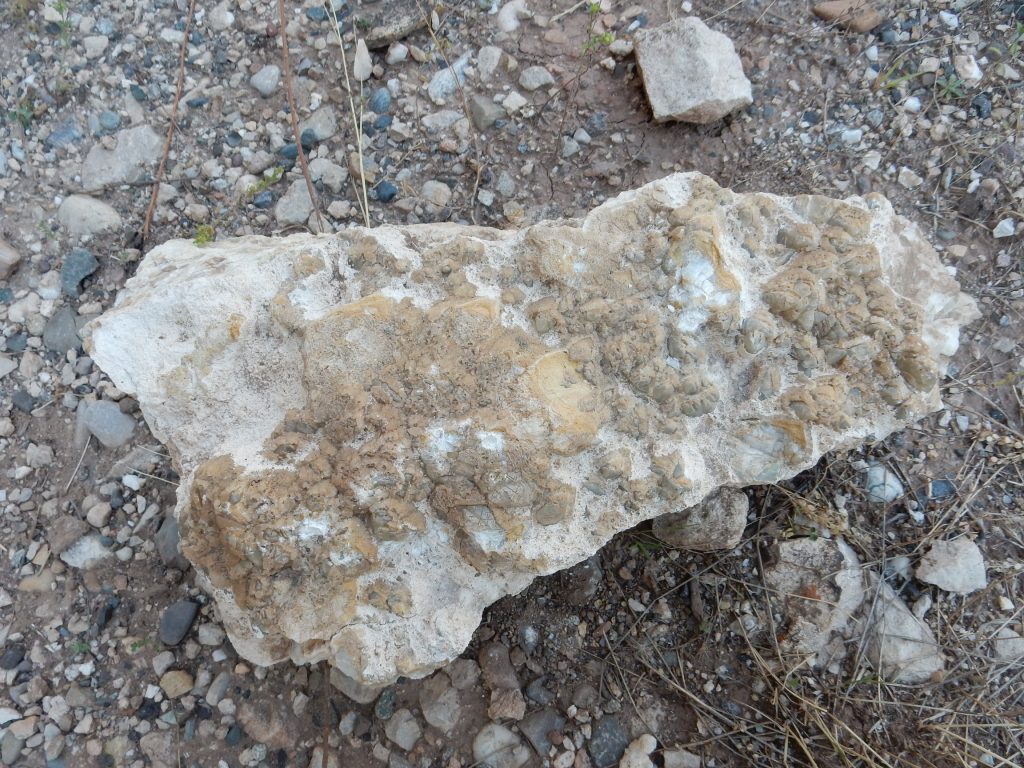 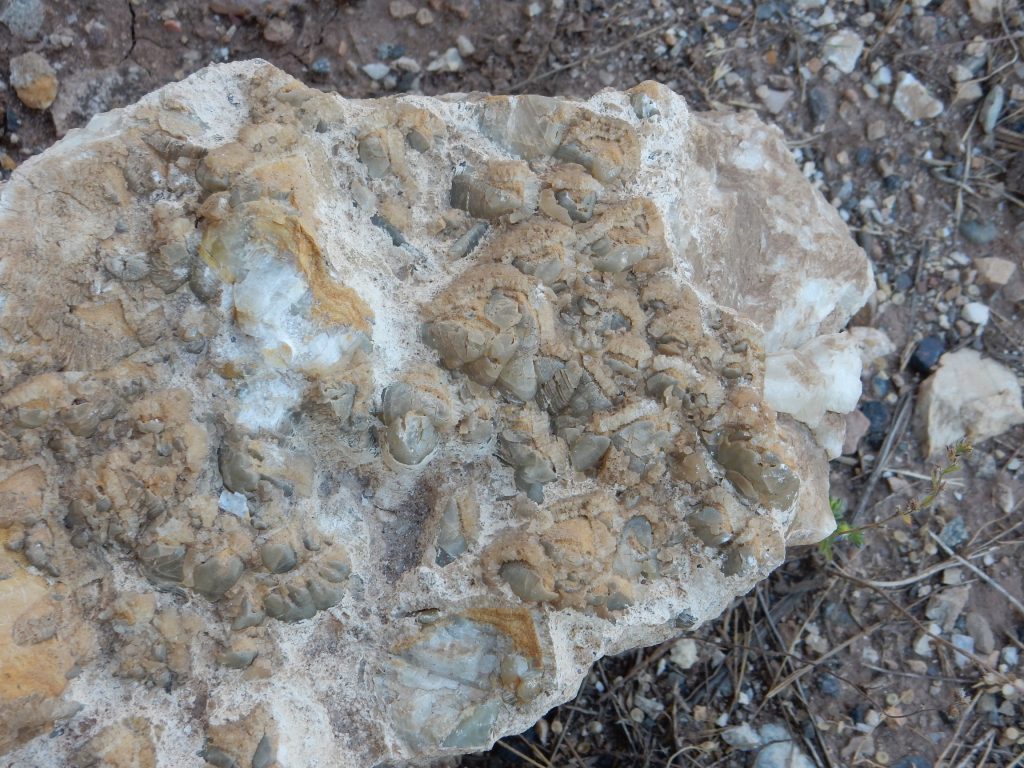 This looks like a bed of shells, but not very well preserved.

More Madison Limestone on the way back. 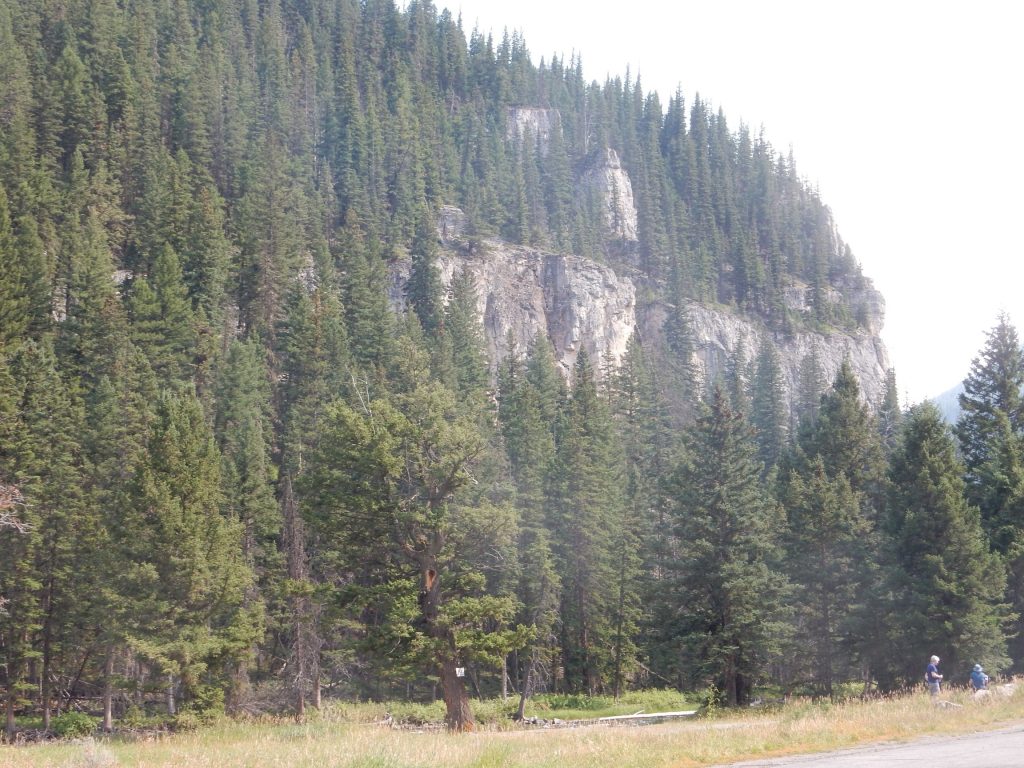 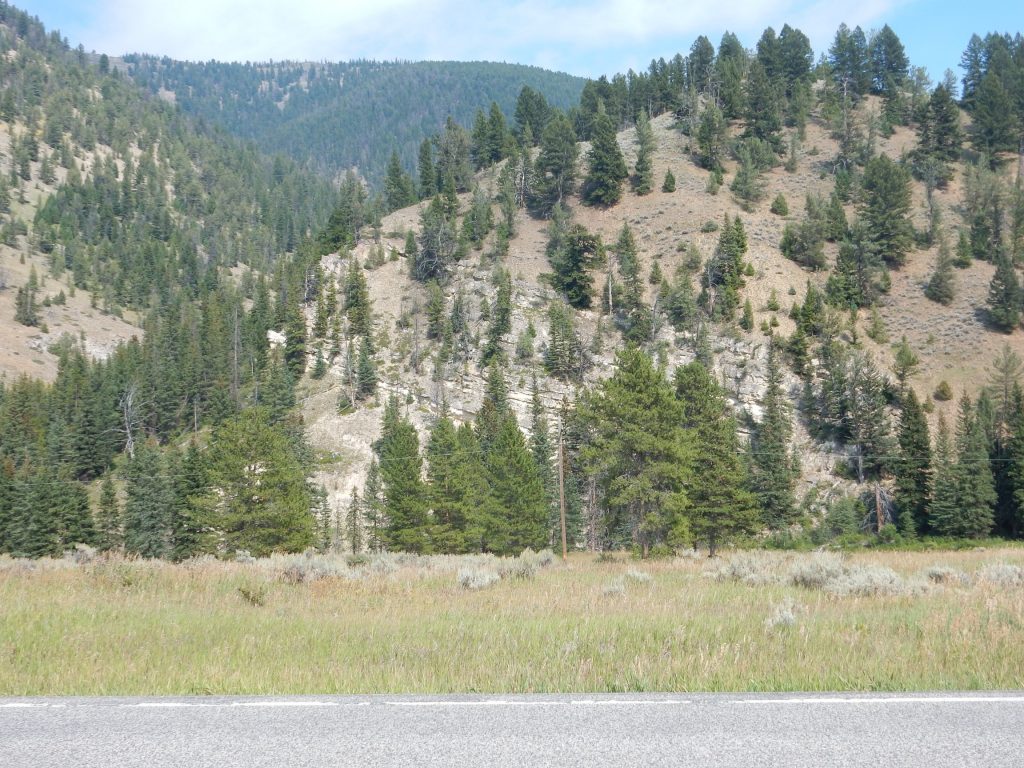 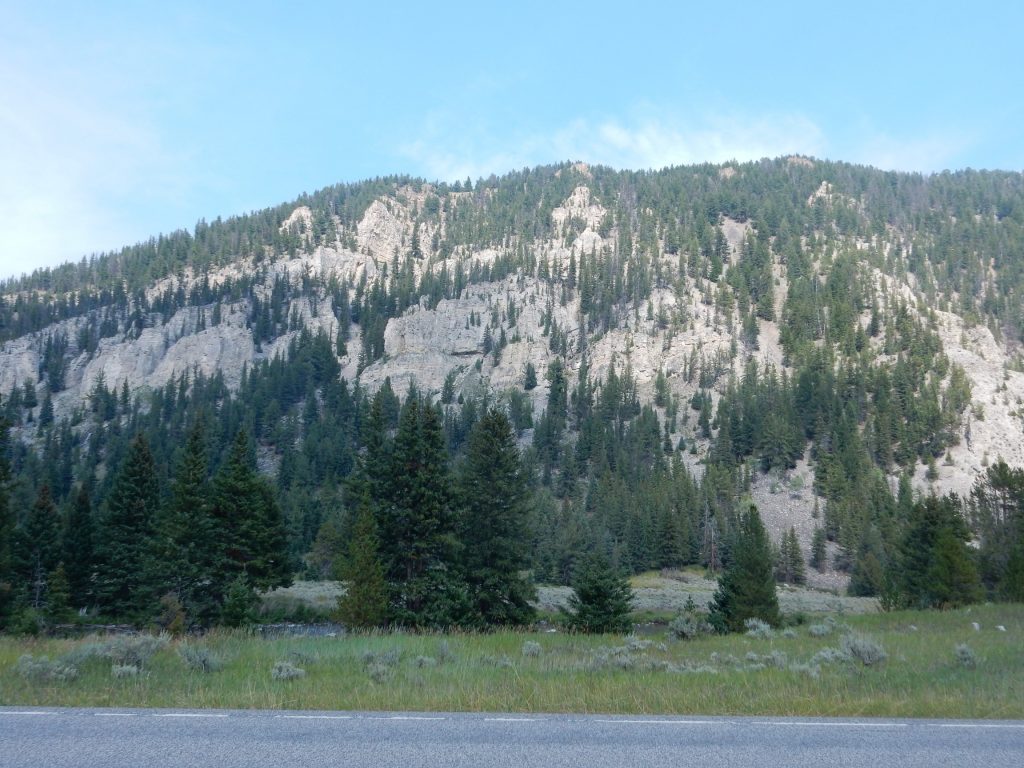 Notice now the dip of the beds changes from place to place. There’s been a lot of distortion of these rock beds, unsurprising in this mountainous country. 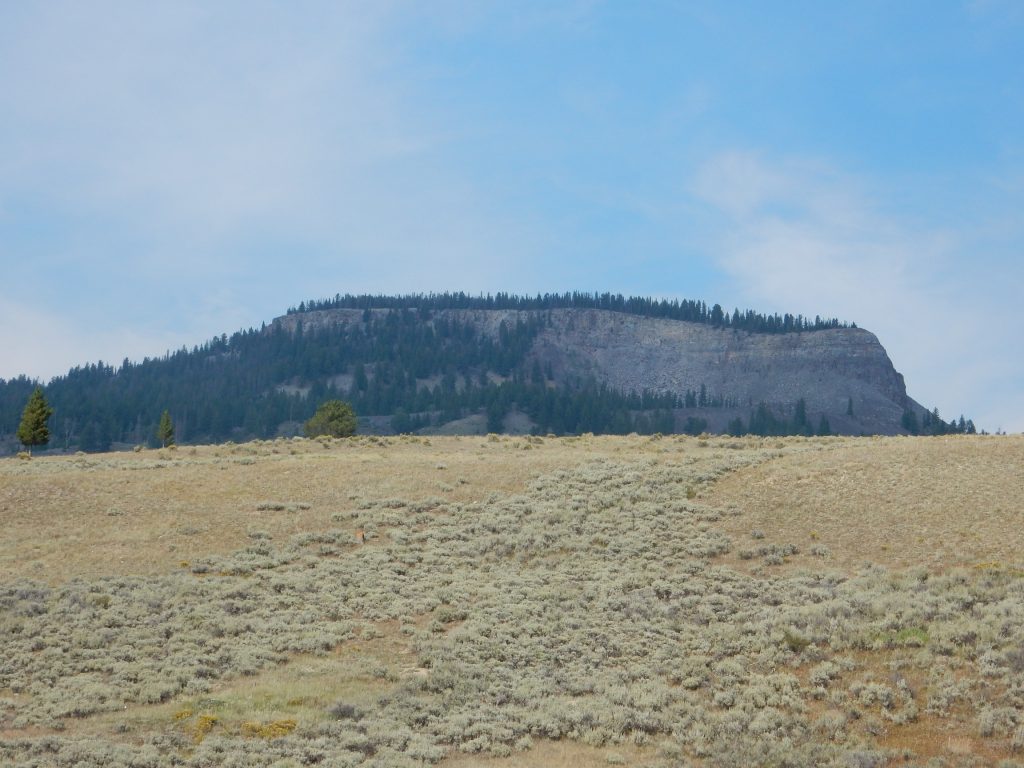 Capped with Huckleberry Ridge Tuff from the super eruption 2.2 million years ago, over mostly glacial sediments. 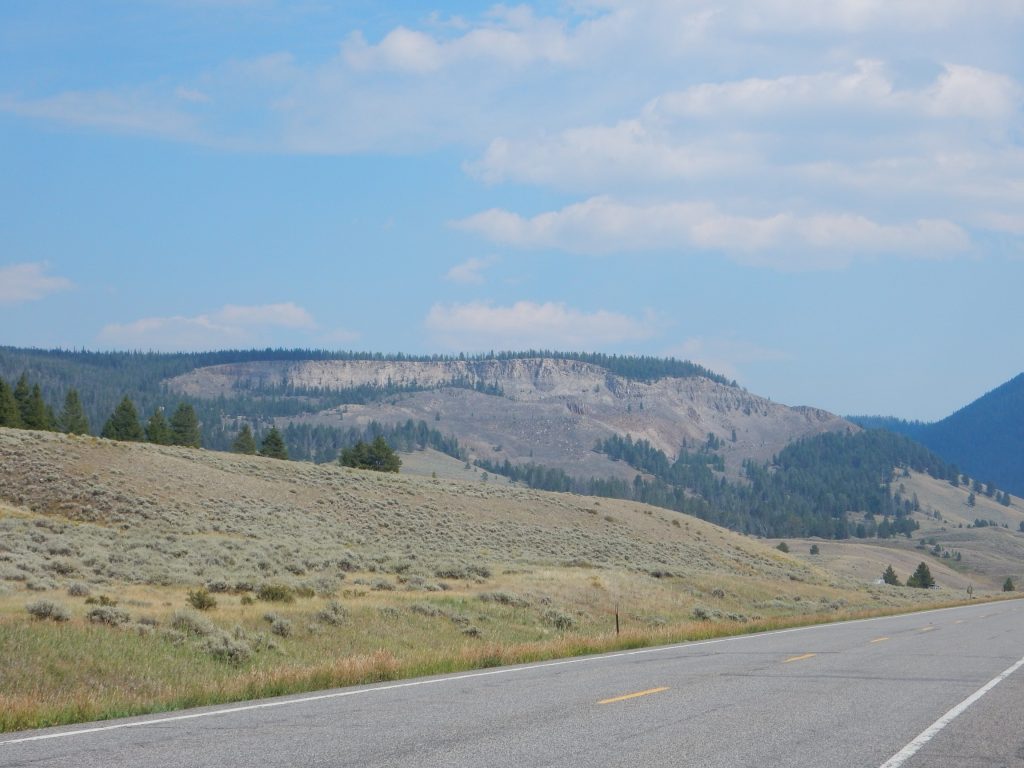 Similar, but with some Jurassic and Cretaceous beds exposed poorly on its flanks. 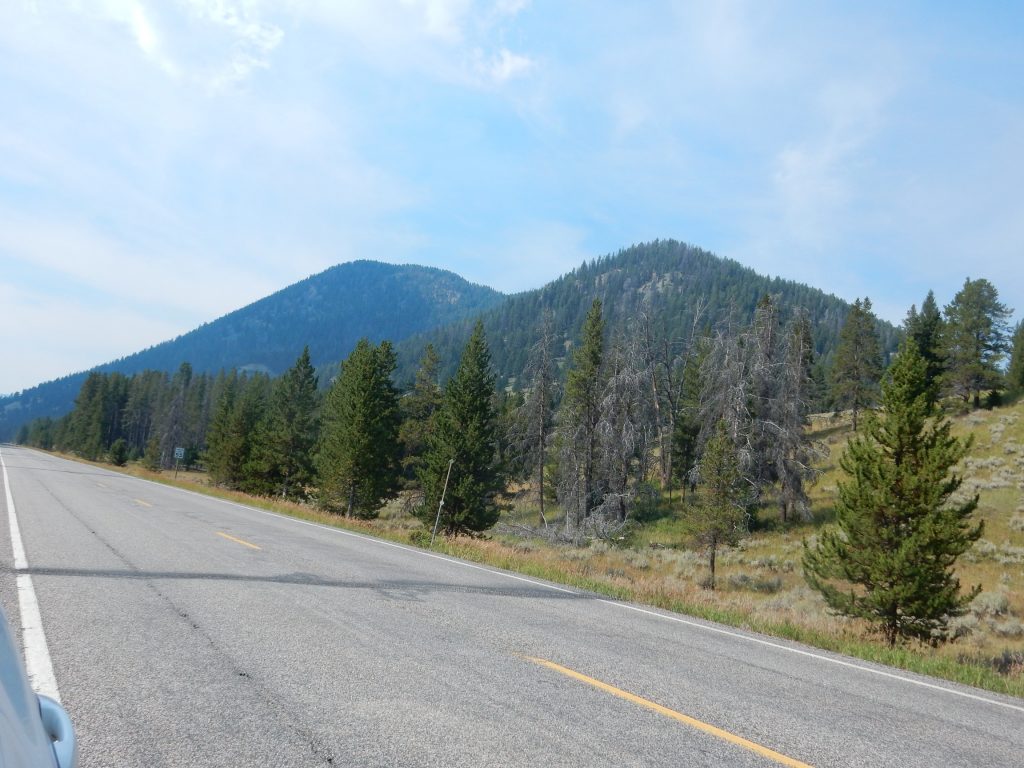 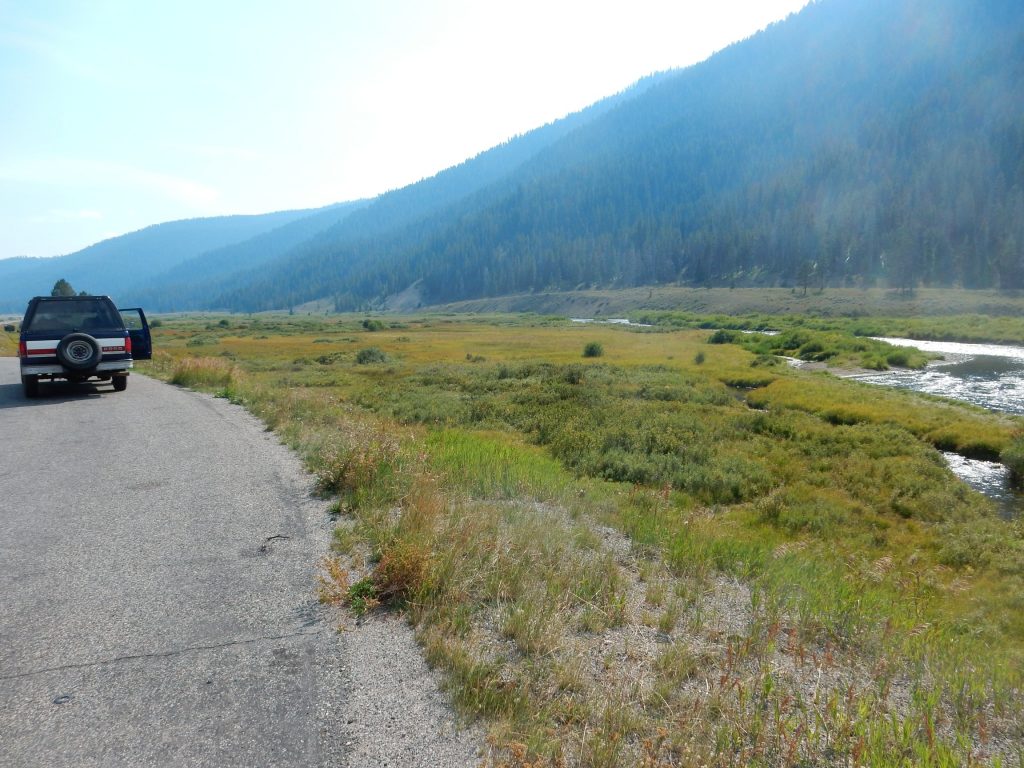 A glacial valley, I presume, with a nice river terrace on the far side of the river. Unless that’s a fault escarpment, which is very possible in this area. However, my geologic map shows no fault.

I return to my campsite, after topping off my gas at Robins Roost again. I call Cindy, who informs me the weather will be miserable back home, and warns me not to underestimate traffic here. I am not unmindful. I eat an early dinner and turn in early, after making every possible preparation I can think of to get up very early and get down to Rexburg.

Next: The big day