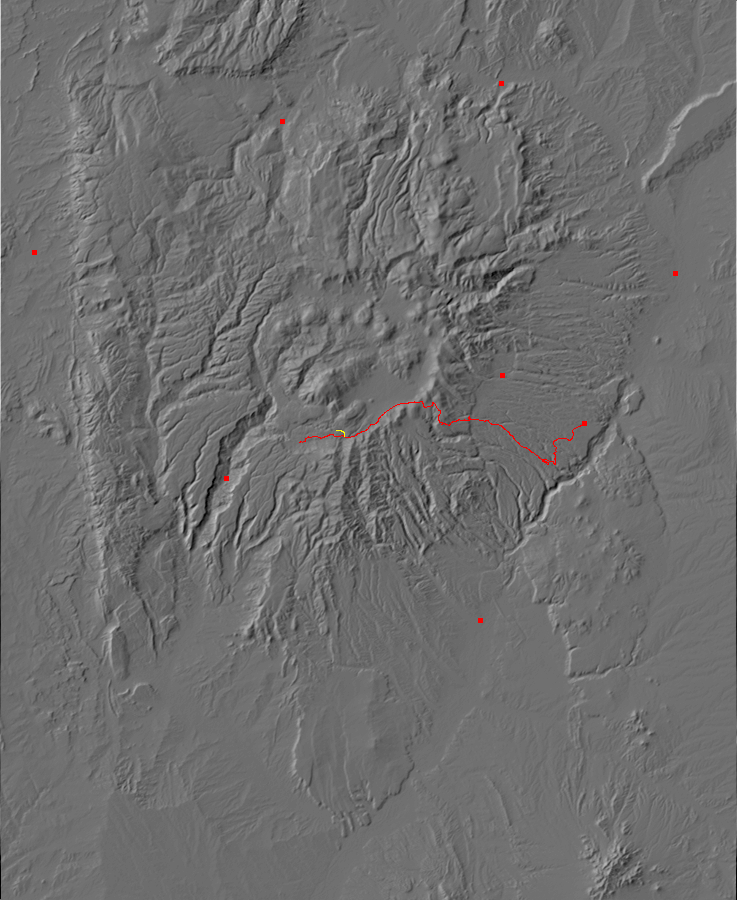 I had a four-day weekend for Labor Day, thanks to  my employer’s 9/80 schedule, and it’s tough to have a long weekend and not do a little wanderlusting even when you’ve just come back from a big geologic vacation.

So I took the afternoon of Labor Day to get some pictures I wanted for the book. I have good photographs of all the rim except the southwest section, around Los Griegos and Valle de los Indios. So that was my first objective. It’s one that is in keeping with my agreement with Cindy not to hike in back country alone.

The first stop repeats one I made on the last trip, but the weather this day was much better.

The north end of Aspen Ridge dominates the left side of the panorama. This continues south into the Keres Highlands.

At right, in the distance, are Las Conchas, with the pointy peak, and Los Griegos to its right. Los Griegos is the highest point on the caldera south rim. Here’s a closer view from a little further down the road. 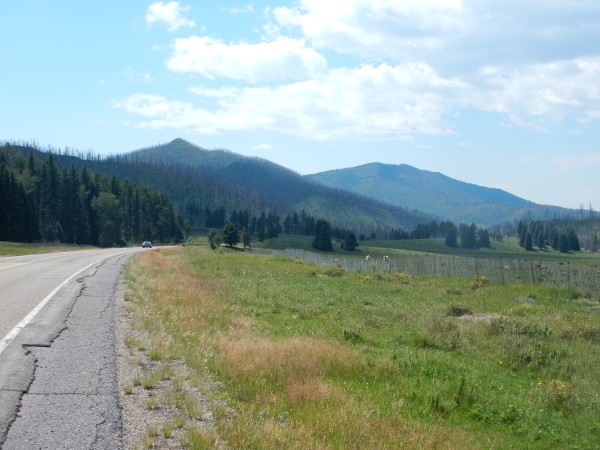 I turn onto Forest Road 10 and into Valle de los Indios. I spend some time along an east-west road on the north side of the valley, trying to find a good spot for a panorama. Unfortunately, it’s just not possible to get the whole rim in a single shot, due to intervening trees and such. These two shots do a fair job. 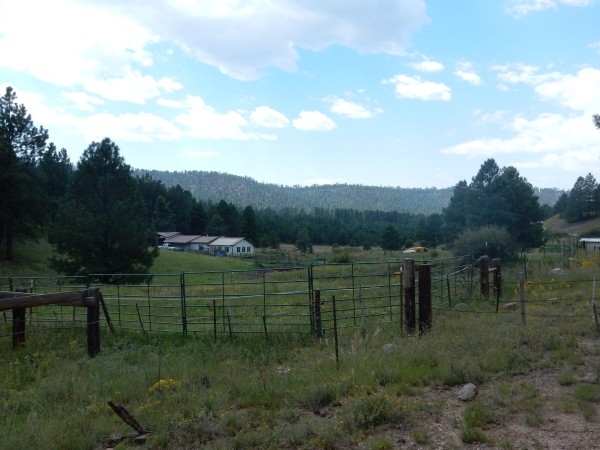 I can’t go any further west; the road becomes private. However, I notice that it comes out as a forest road near here. I may have to explore it from this end at some point; there may be a good spot to view the entire southwest rim along the road.

I start back for home, and notice that the Las Conchas trail head is a madhouse. 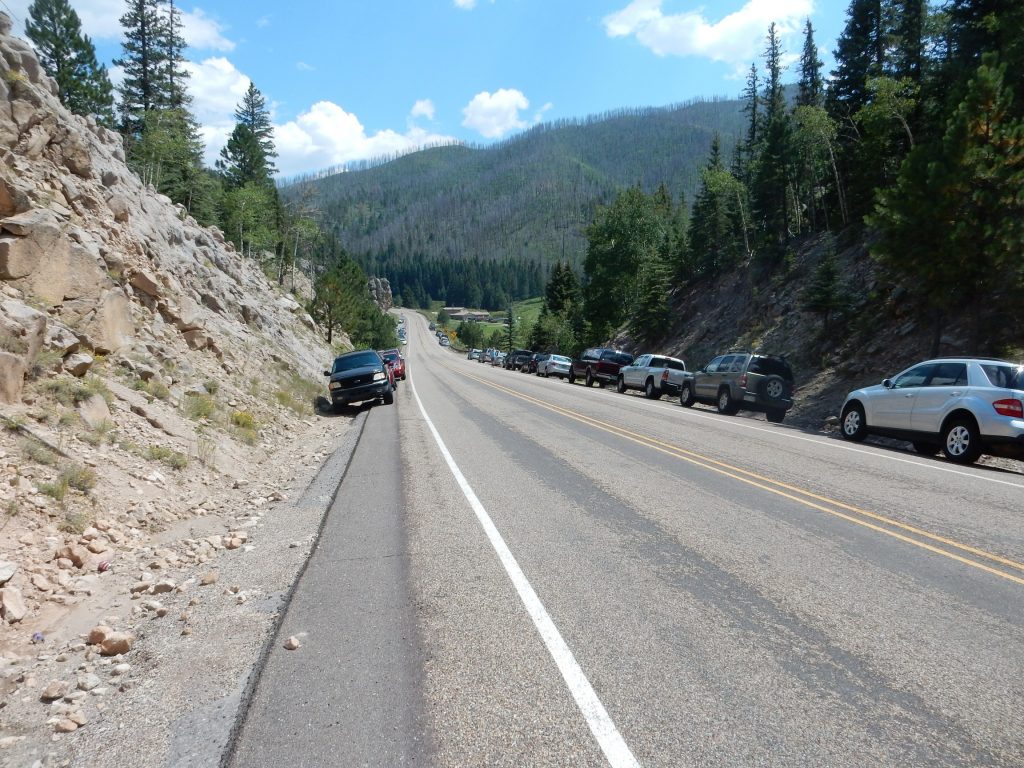 I consider. The area is obviously full of people; I have my cell phone; I have some time. I’ve never hiked this trail before. Yes, I’m going to go hiking.

But first, the road cut. 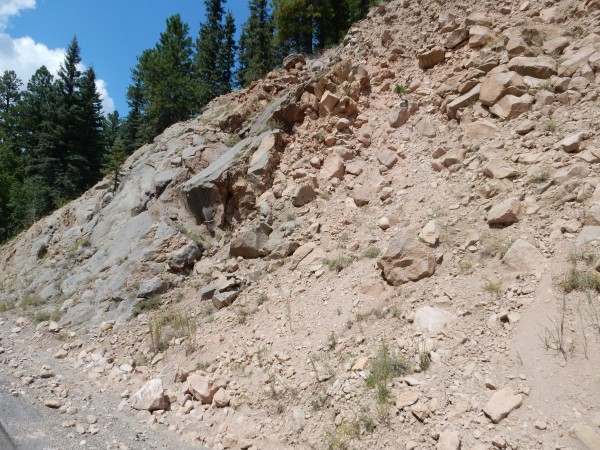 The change in appearance is not a formation contact; this is all mapped as South Mountain Rhyolite. It’s a change in facies, that is, a change in the local character of the rock in a formation arising from local conditions. The rock at right could easily be mistaken for Bandelier Tuff, but on close examination: 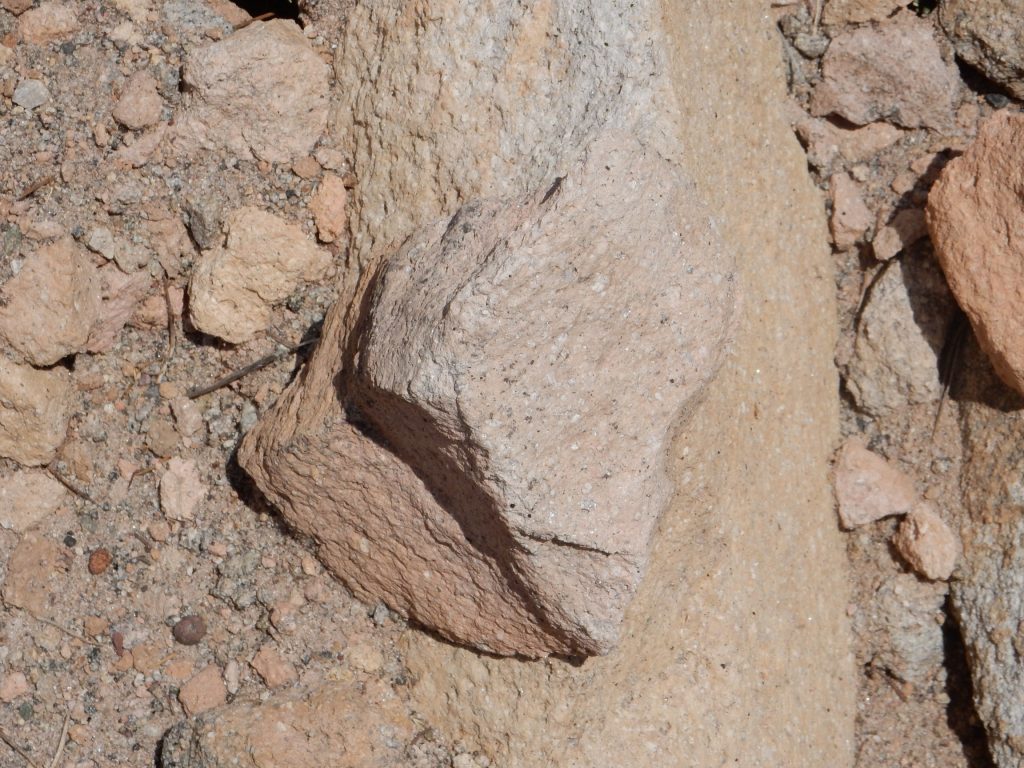 This has the look of devitrified obsidian. The darker stuff probably has very similar composition, but it is only partially devitrified, and the dark color comes from beads of obsidian in the rock. 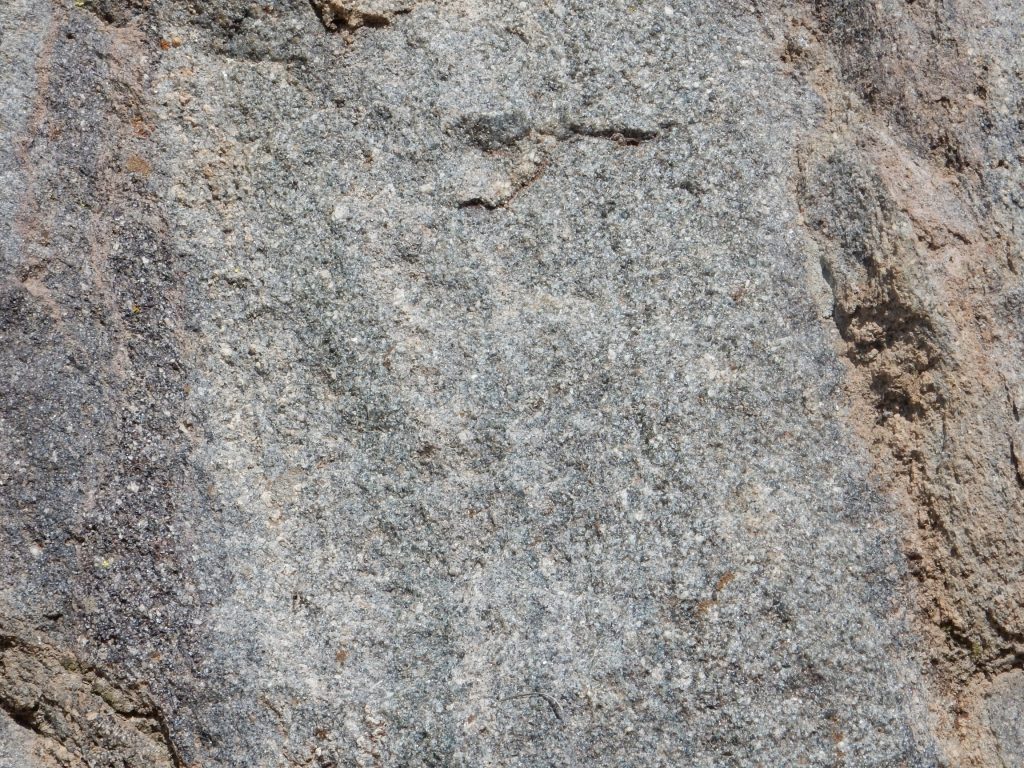 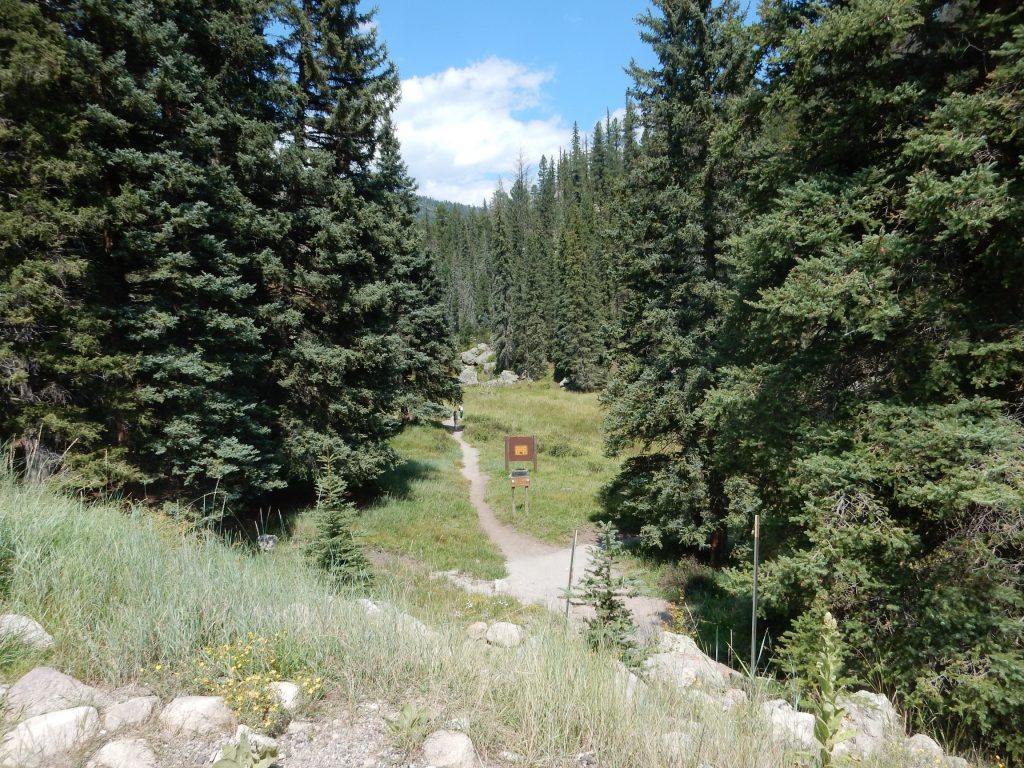 This is a gorgeous area, where the East Fork Jemez River has deeply incised the South Mountain flow of the Valles Rhyolite. This flow is a little over half a million years old, and erupted through the ring fracture where the Valles caldera collapsed 1.25 million years ago.

The area east of the trail head: 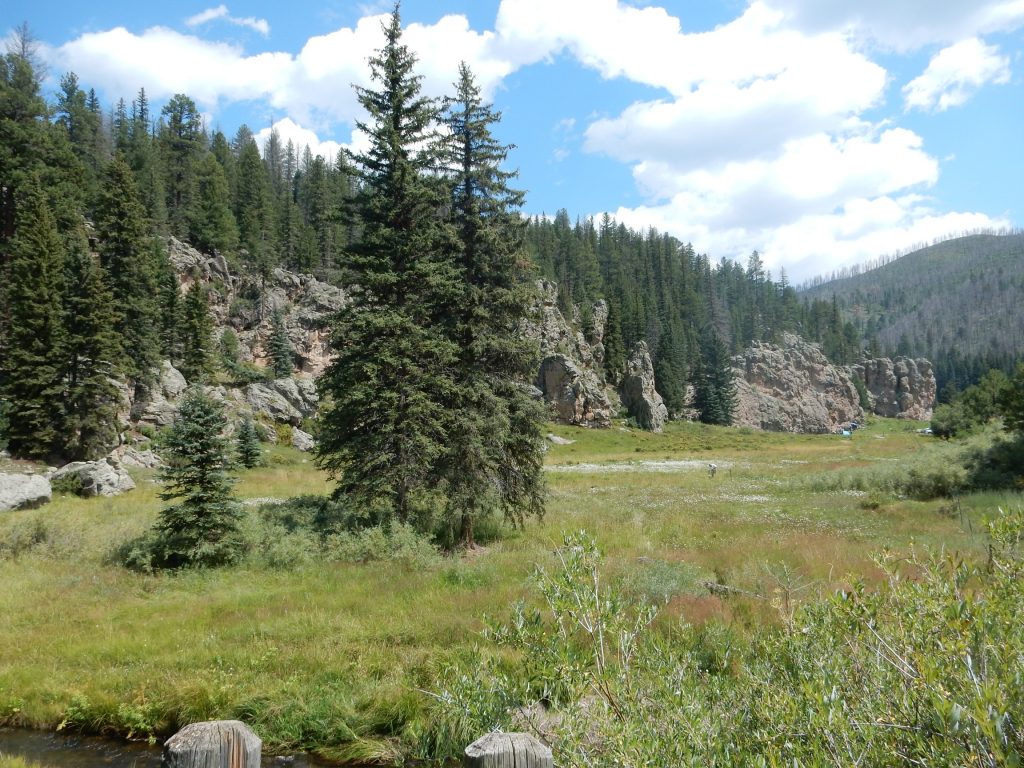 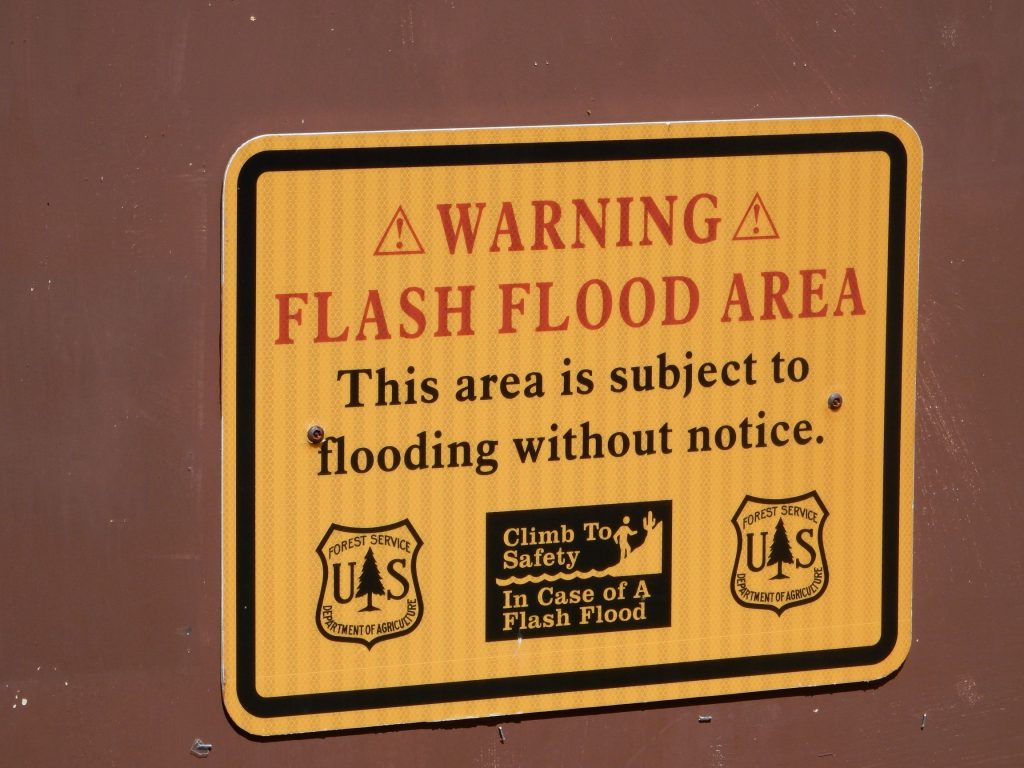 I appreciate the flood warning, but the wording is … odd.

This area is tremendously popular with climbers, because the river has cut nearly vertical cliffs down into the rhyolite. 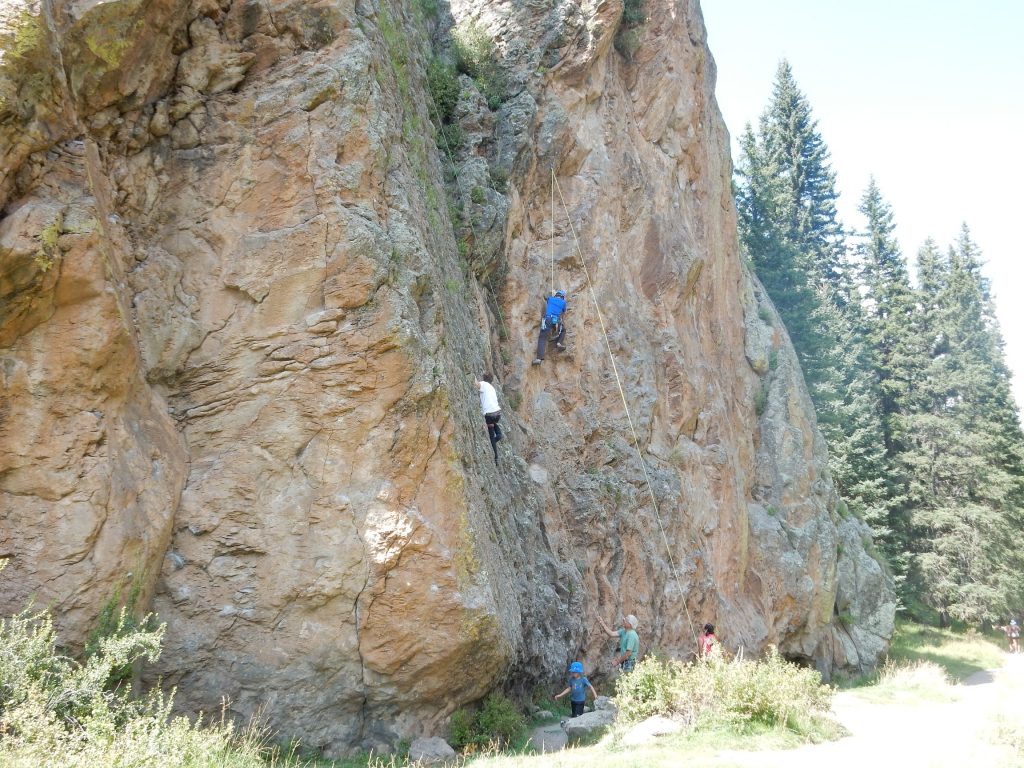 I was struck by this notch at the base of the cliffs. 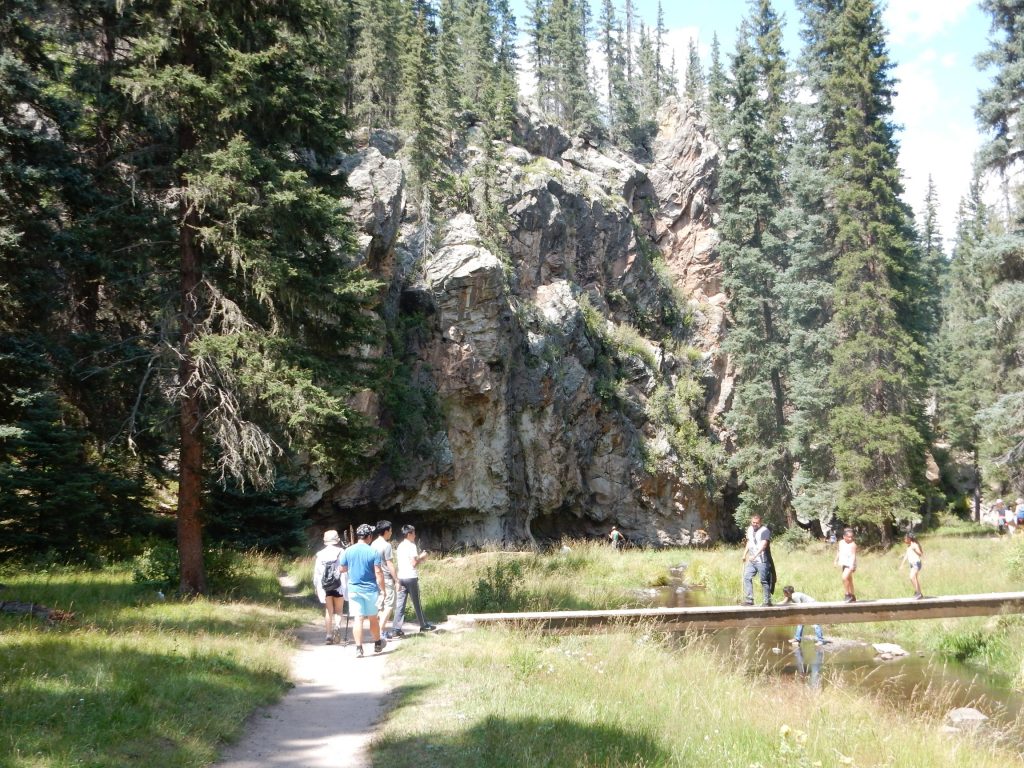 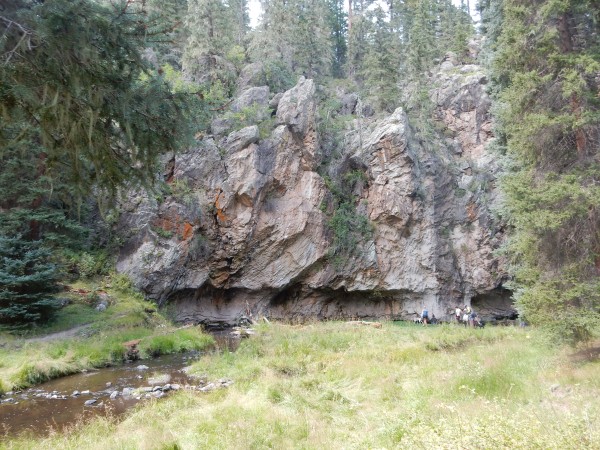 This looks a lot like a natural sea wall, and formed by the same mechanism — water cutting into the base of the cliff. Here, it’s the meandering East Fork Jemez River, rather than the ocean surf.

As I said, a truly lovely area. 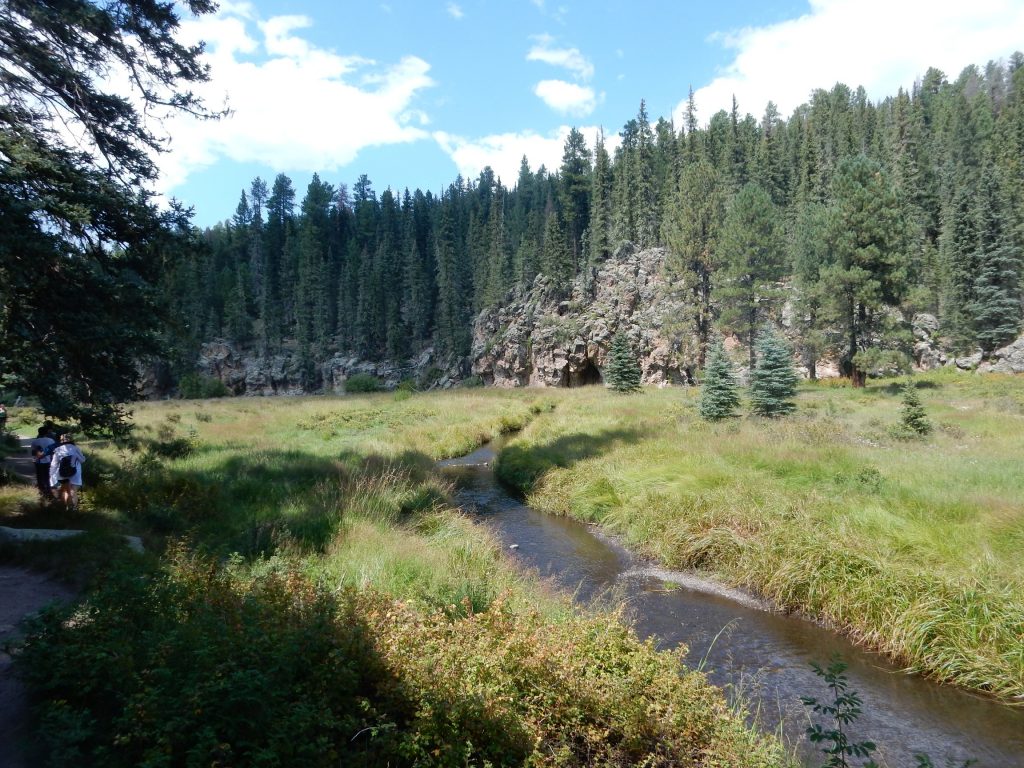 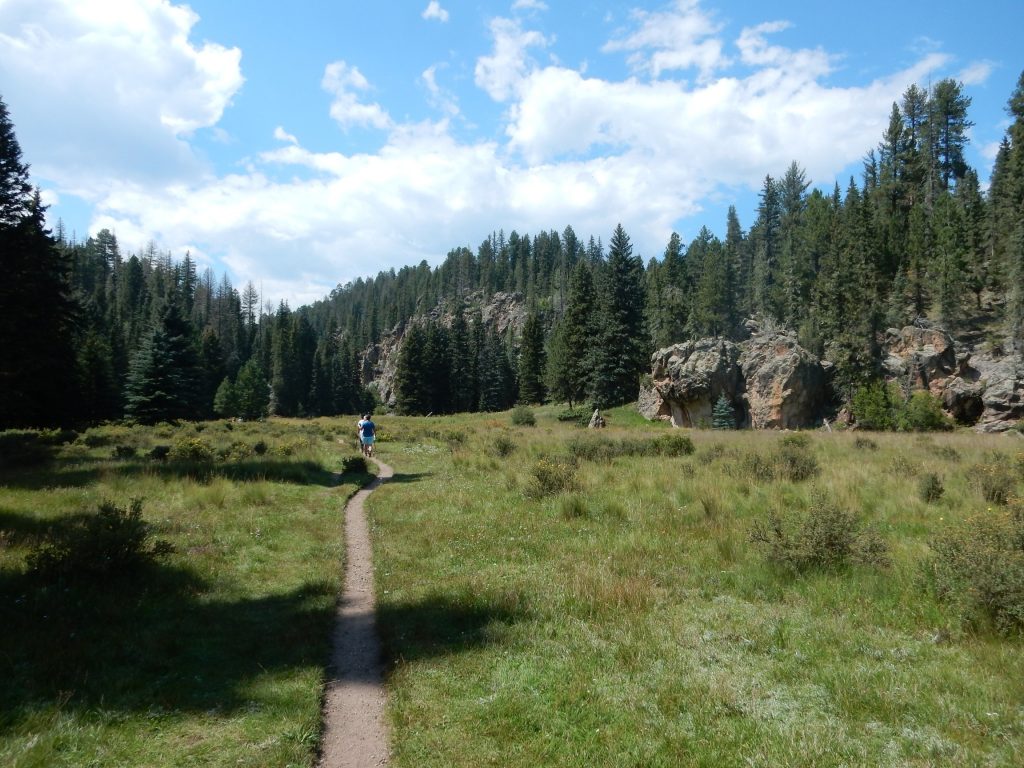 A closer look at the rhyolite cliff. 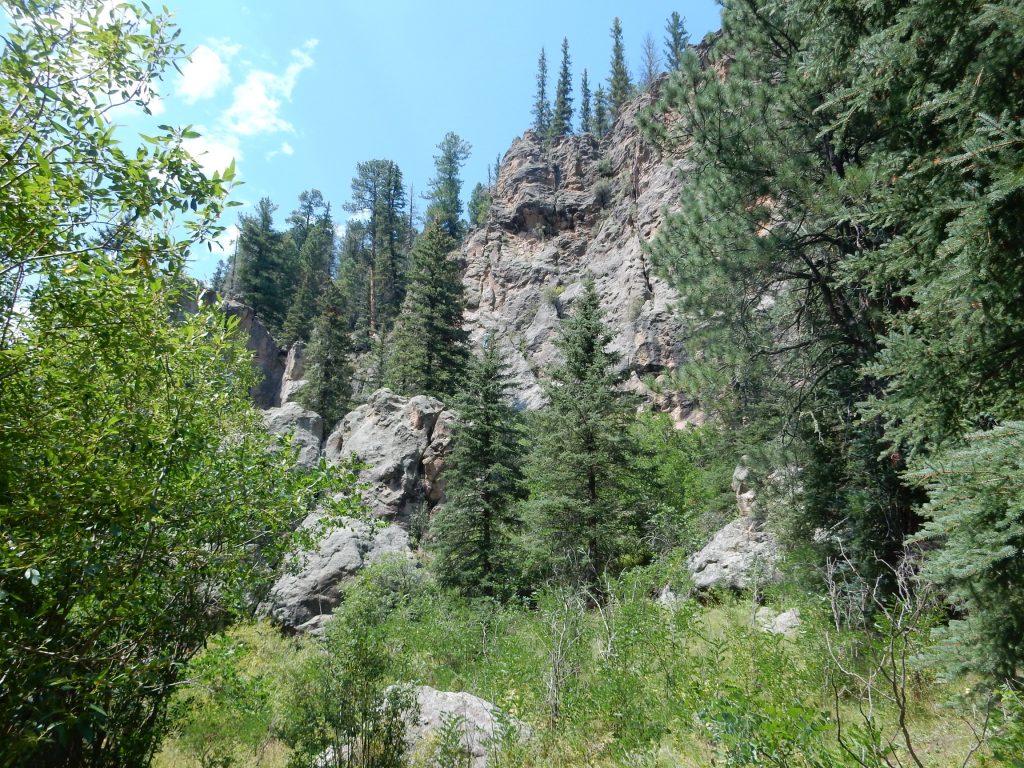 If you look very closely, you’ll see a climber working his way up the cliff. This is apparently a popular site, known as Easy Bake Alcove. (Don’t ask me.)

Nearby is an interesting outcrop. 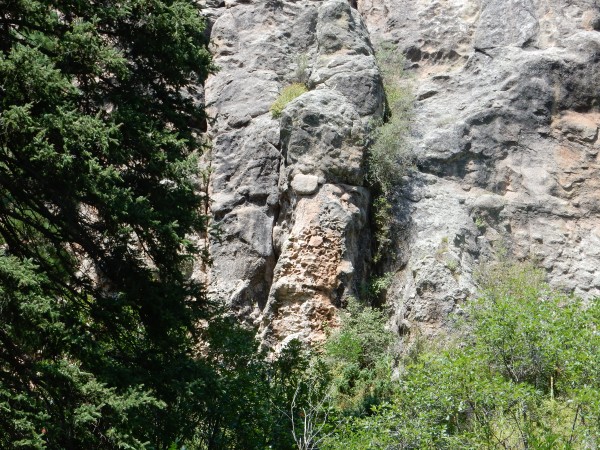 This looks like autobrecciation at the base of the flow. Rhyolite flows are so viscous that the outer parts of the flow rapidly solidify, then are broken into fragments by the continued movement of the still-liquid interior.

The trail goes on. 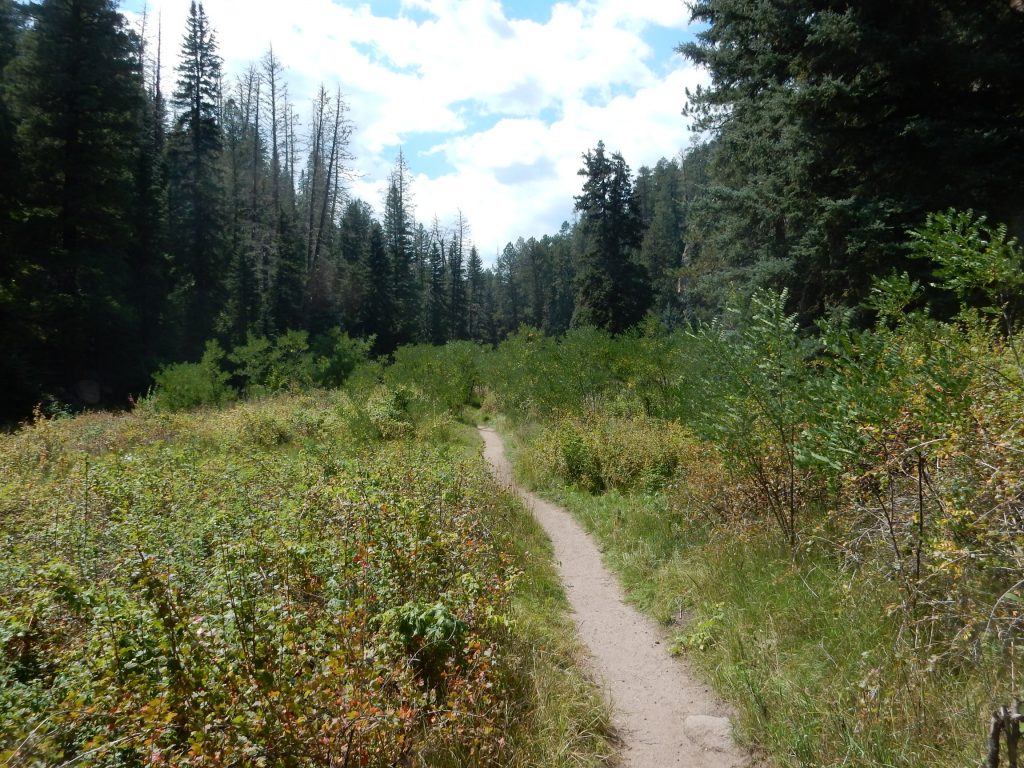 But I wonder if I should. I seem to be alone on the trail now. But then I hear voices down the trail, and I continue on just a little further. 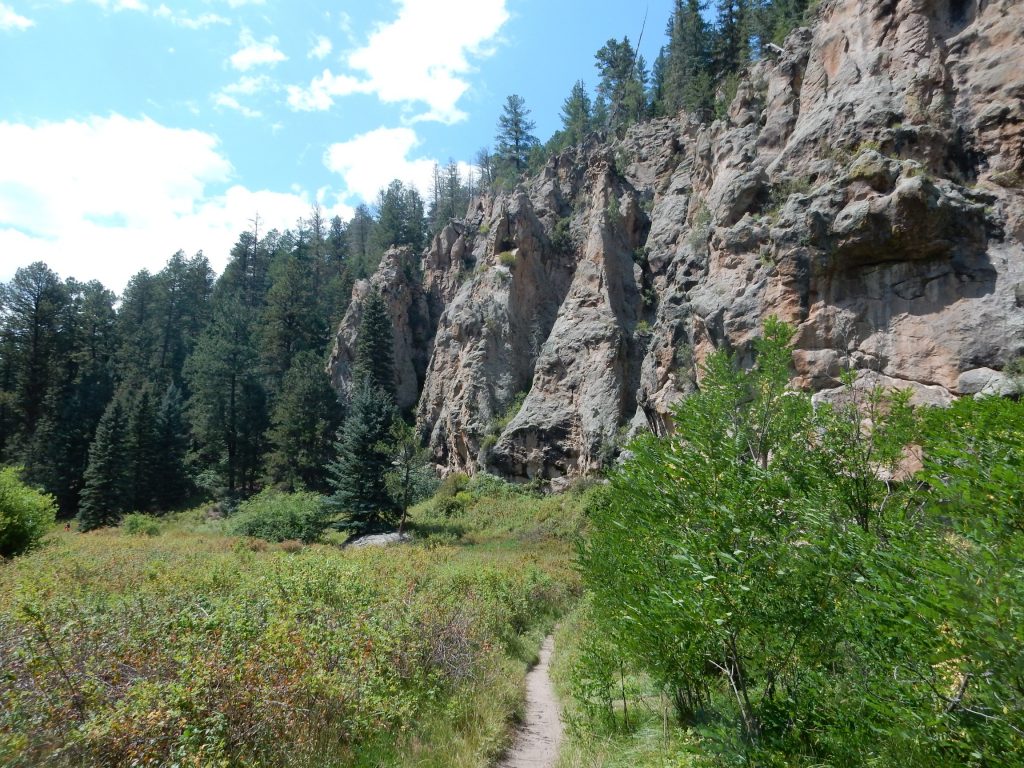 But my time is up, and, although I hear interesting talk about there being some falls further along the trail, I cannot continue further. I return to the trail head, pack up, and head for home.