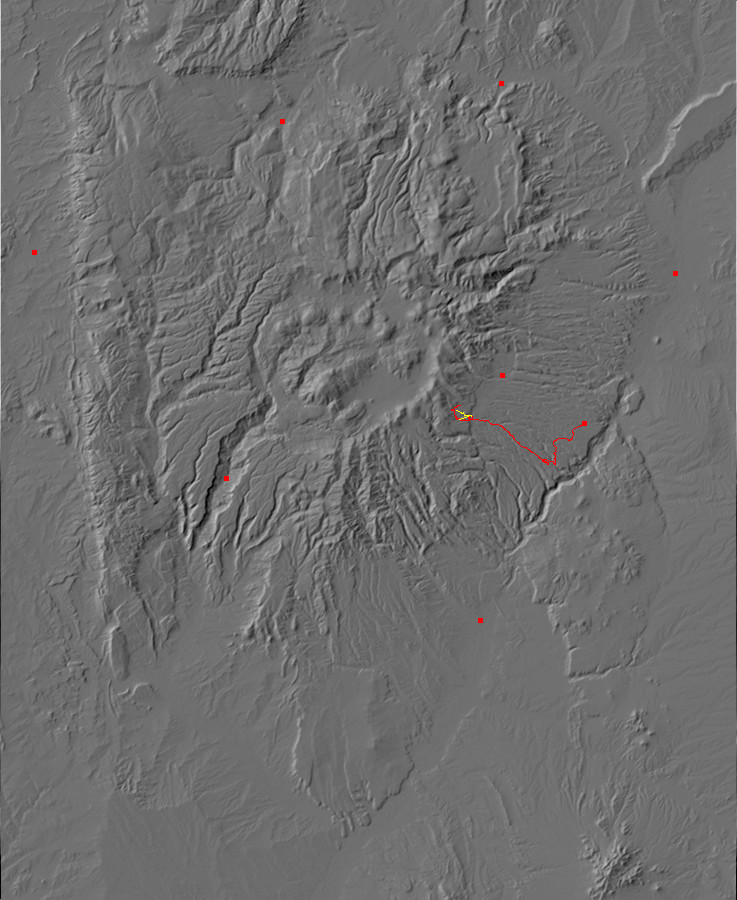 I would have titled this “Wanderlusting American Spring” but, since I did not actually visit the spring itself, that seems a tad inappropriate.

The occasion was the annual fathers and sons campout held by my church. My sons are not much into camping (one is autistic and the other is in poor health) but I thought I’d drop by anyway, and bring my big telescope for some of the participants to look through. 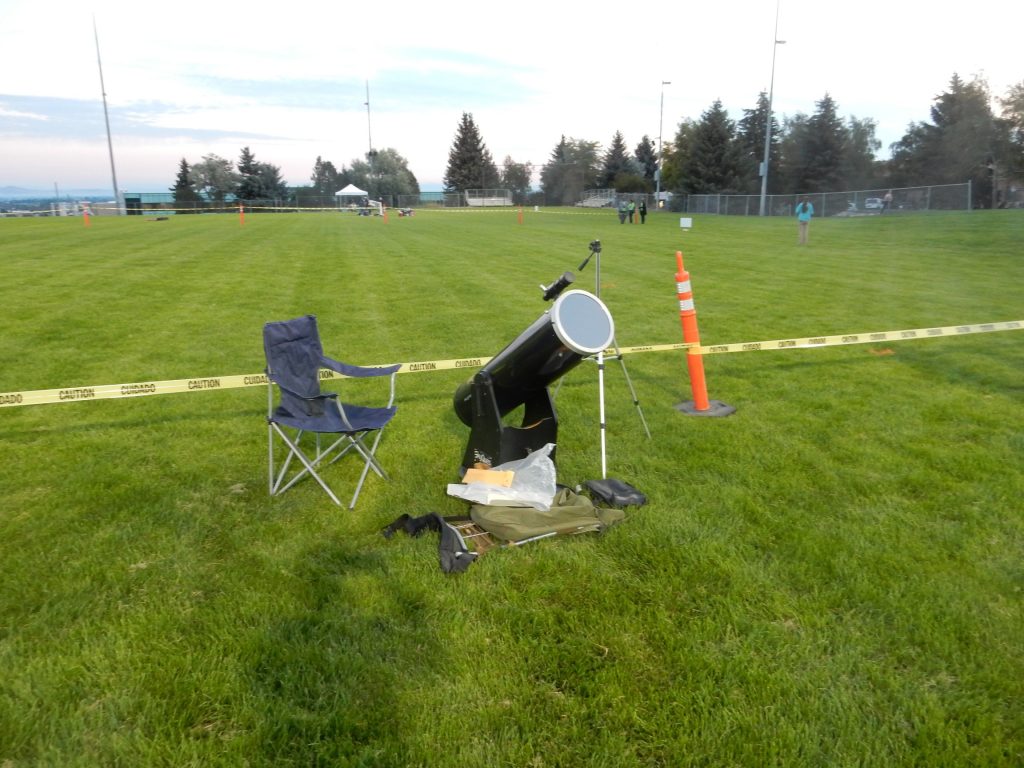 For illustrative purposes. Not actually photographed at this campout.

The scope is a 10″ Dobsonian reflector, ideal for taking some significant telescope power on the road.

So I packed up the scope and some miscellaneous supplies and headed out. I was not planning to stay the night, but only to visit for the evening. I arrived at the turn to American Springs and took what I thought was the right fork (meaning, I took the left fork.) The road was initially quite good, but after a mile or two, the road became pretty gnarly. Also, I had seen only a couple of cars in the area. I figured this could not be the right way, backtracked, and tried another  fork .  There were a couple of campers here, but the occupants  turned out to be people I did not know. Well, shucks, and other comments. I drove back to the highway and realized my group was along the spur heading to the east. I pulled well off the road to a spot where I figured I could set up my telescope. However, the area was sufficiently heavily forested that there was a not a terribly clear view of the sky, which in any case had a lot of high overcast. Maybe it would clear.

I found Gary Stradling there, having a good time with his young grandsons. We (Gary Stradling, grandson, and I) walked over to the edge of Water Canyon to take in the view.

The flats across the canyon are part of the upper surface of the Tsherige Member, Bandelier Tuff. This is the formation underlying most of the Pajarito Plateau east of the Jemez, including the Los Alamos town site, the LANL reservation, and Bandelier National Monument.  The Tsherge Member was laid down 1.25 million years ago by the Valles eruption, which produced the enormous Valles caldera. The eruption poured out pyroclastic flows, mixures of red-hot gas and particles of volcanic ash that flowed across the ground like a fluid, destroying everything in its path and eventually settling to the surface to form the Tsherige Member. Rocks formed this way are called ignimbrites, though the older name “tuff” is still commonly used.

The hills to the left are part of the Sierra de los Valles, which forms the skyline west of Los Alamos. This is underlain by the Tschicoma Formation, which is mostly dacite between 7 and 2.5 million years in age. Dacite is a volcanic rock formed from lava that is fairly rich in silica. The silica makes the lava viscous, so that it tends to pile up as domes and short flows rather than flowing freely across the surface of the ground.

At far right, we are looking past the Pajarito Escarpment into the town of Los Alamos. The escarpment marks the most significant fault of the Los Alamos area, the Pajarito Fault, where the rock beds have fractured and the east side is slowly slipping downwards relative to the west side due to stretching of the Earth’s crust along the Rio Grande Rift. The Rift is a great crack in the earth’s crust, largely coincidental with the Rio Grande Valley, which stretches from central Colorado to El Paso. Here it blends into the Basin and Range of northern Mexico.

And the Los Alamos emergency management center is located just a hundred yards or so from this major fault. This seems to make the geologists in the area want to shake their heads. In fairness, the fault hasn’t moved in twelve thousand years or so.

There are some nice exposures of Tsherige Member across the canyon. 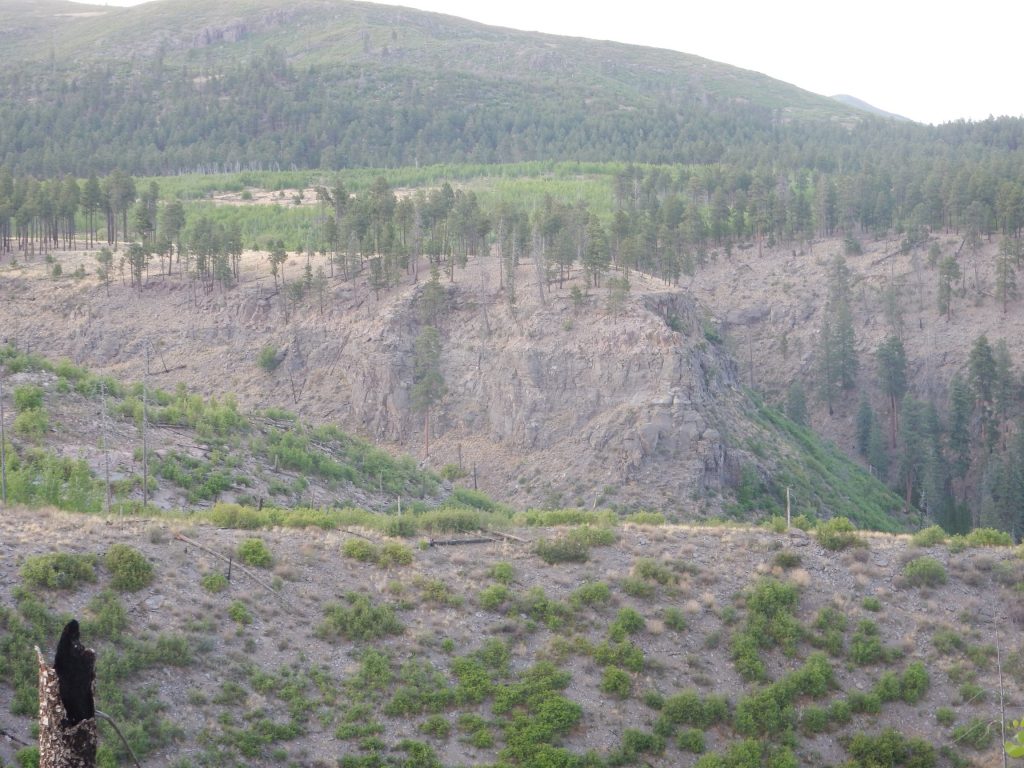 It looks like there are at least two flow units exposed here — separate pulses of the eruption that have slightly different chemistry. But what really caught my eye were some red beds across the near spur of the canyon. 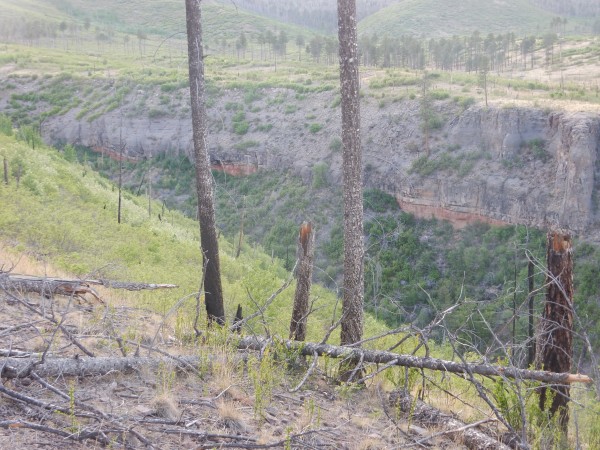 I knew from the geologic map that this entire area is mapped as either Tsherige Member; Tschicoma Formation; or various kinds of young alluvium (sediments deposited by water in geologically recent time, such as gravel in canyon bottoms.) A closer look: 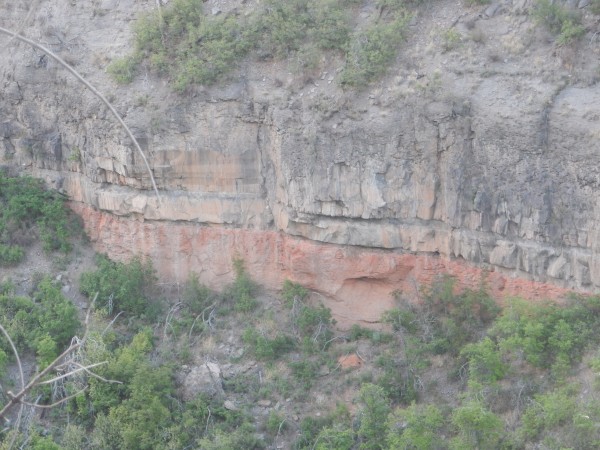 Gary and I speculated on various ways we might hike to these beds. Eventually Gary spotted a trail from the mouth of the canyon; well, there it is. 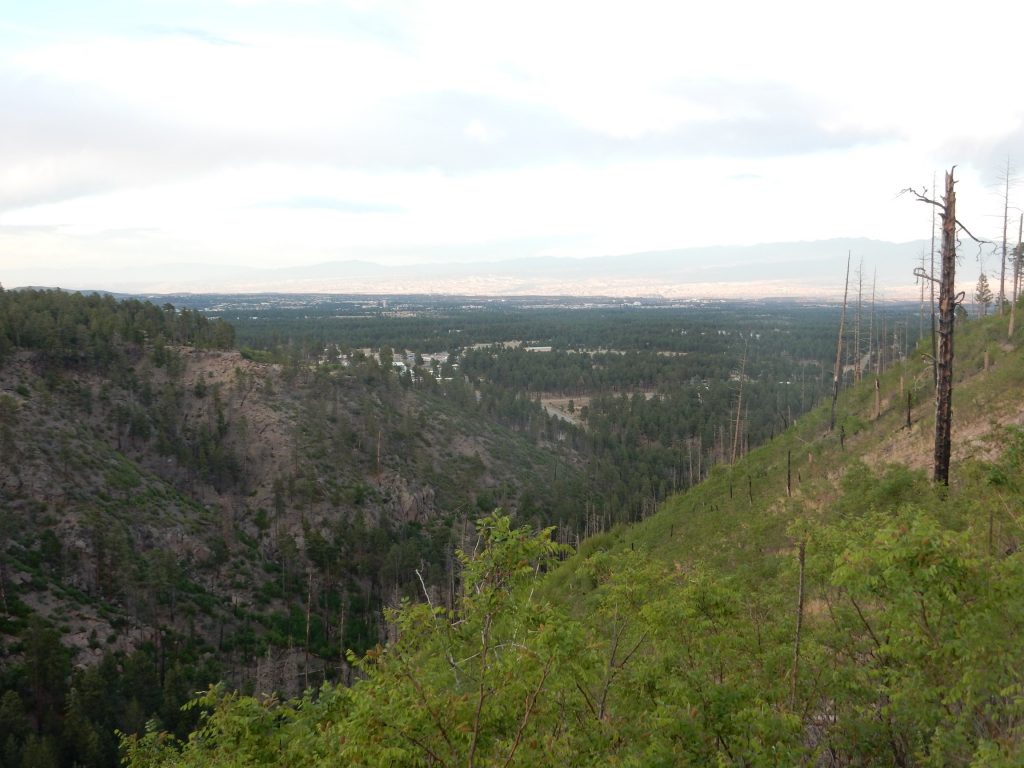 and from there to the edge of the escarpment. I took more pictures but they didn’t turn out well; the light was fading. The view from the escarpment was partially blocked by forest. However, Gary spotted an area where several elk had been sleeping, leaving distinctive marks on the ground. I’m no hunter, but I could see what he was pointing out.

We headed back, to find a forest ranger talking with the leader of our group. It seems that groups of more than 50 persons camping on unimproved National Forest land are supposed to get a permit. We were aware of Stage 2 fire restrictions and had avoided any open fires in our camping area, but we learned that we weren’t supposed to park any vehicles on grassy areas. (Hot mufflers, I suppose.) There was a mad scramble as we relocated our vehicles onto the dirt road, which became rather crowded. Live and learn.

I actually would not mind if we camped at Graduation Flats next year, as we have in the past. The sky is much more open there. The area gets its nickname from its traditional use by Los Alamos High School seniors for their post-graduation bacchanalia.

I set up the scope, and Gary and two other friends, Steve Schramm and Richard Sandberg, and two of Richard’s young sons, had a fairly nice little star party. We looked at Venus, which is still on the far side of the sun and not much but a bright dot in the scope; the crescent Moon (always spectacular); and Jupiter. There is a crater on the Moon, Petavius, that has a large rift from the central peaks of the crater than runs straight as an arrow to its rim. This shows up quite well in a small telescope at crescent moon. Steve spotted it but Gary had a hard time; compensation, I suppose, for his knack for spotting nice fossils. We also looked at a couple of double stars and at the M81-M82 pair of galaxies before calling it a night.

I just about ran down a couple of elk on the short drive to the highway. A small herd was wandering just west of the camp area.

The next morning, I found Cindy was very much under the weather, and she sent me to do the weekly shopping by myself. Since I needed the exercise anyway, I took the roundabout path past the mouth of upper Water Canyon, where it cuts through the Pajarito Escarpment. Yep, I was going to hike up that trail and look at the red beds. 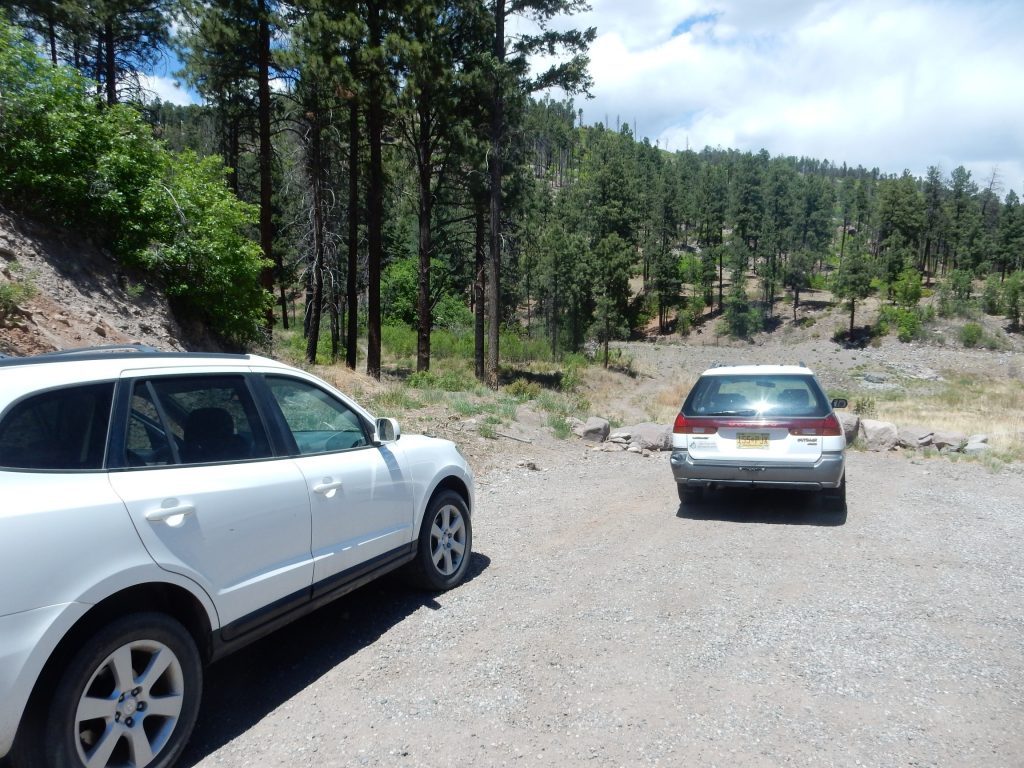 This turned out to be a pleasant, mostly shady, hike. 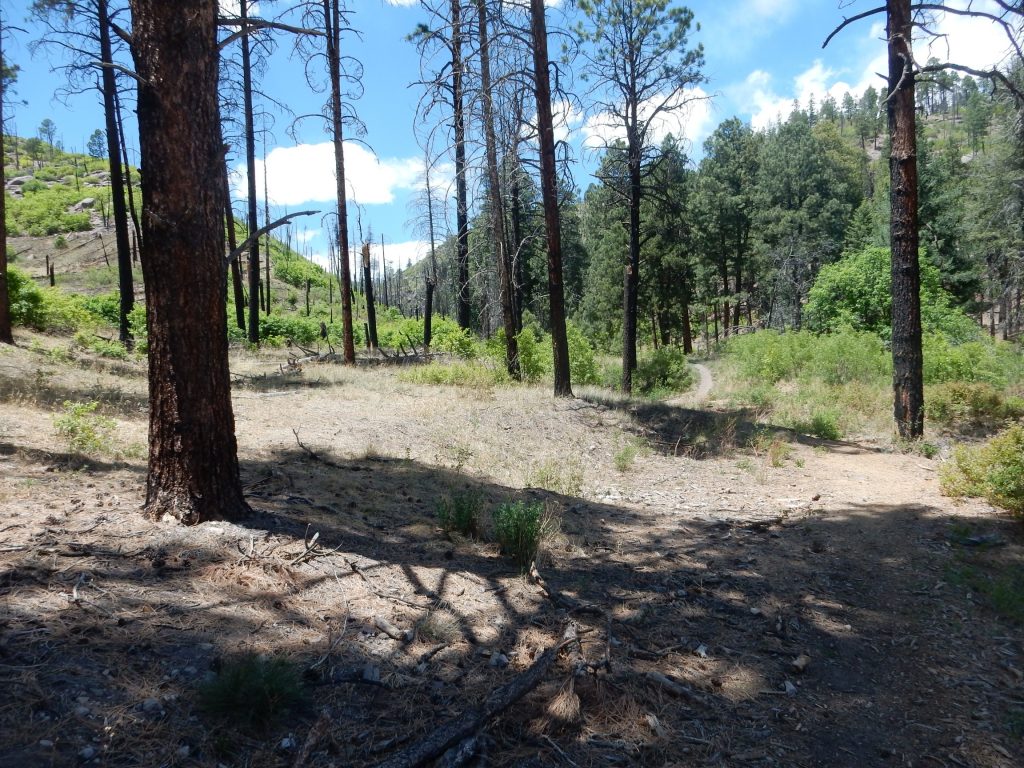 Water Canyon is so named, I assume, because it has one of the few perennial streams of the Pajarito Plateau. 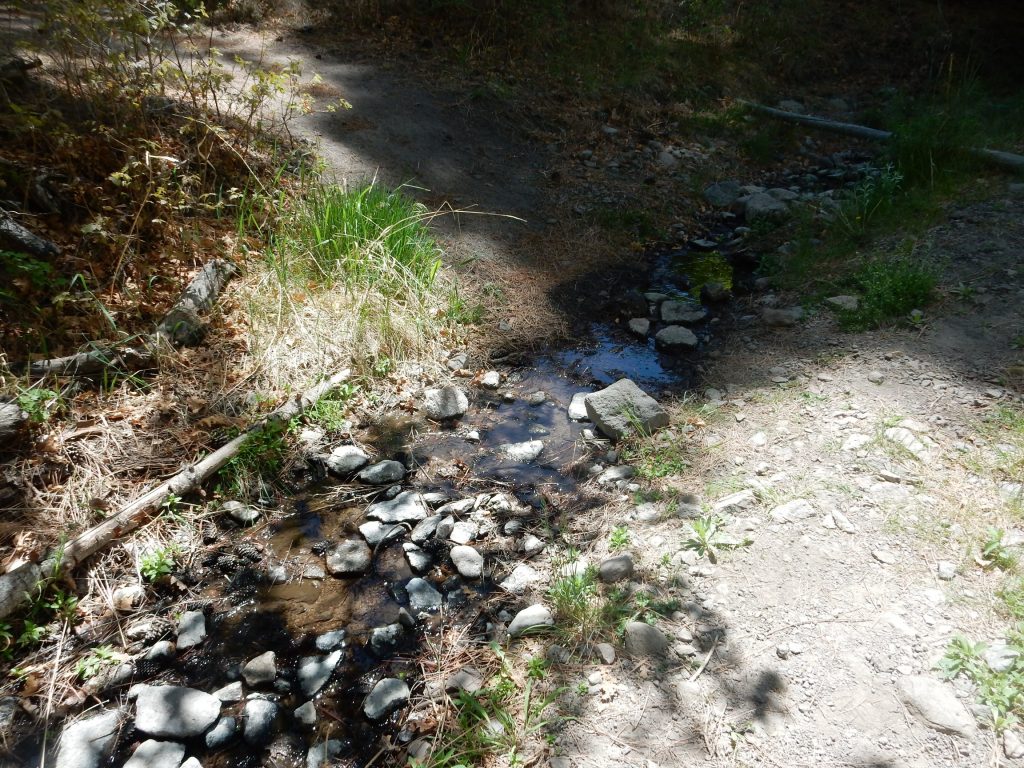 The stream runs throughout the summer in wet years (of which this is not one) in the upper canyon. The lower canyon dries up later in the season, even in wet years. To my knowledge, there is no stream on the Pajarito Plateau that runs year-round all the way to the Rio Grande except Frijoles Creek.

A nice boulder of Tsherige Member in the canyon floor. 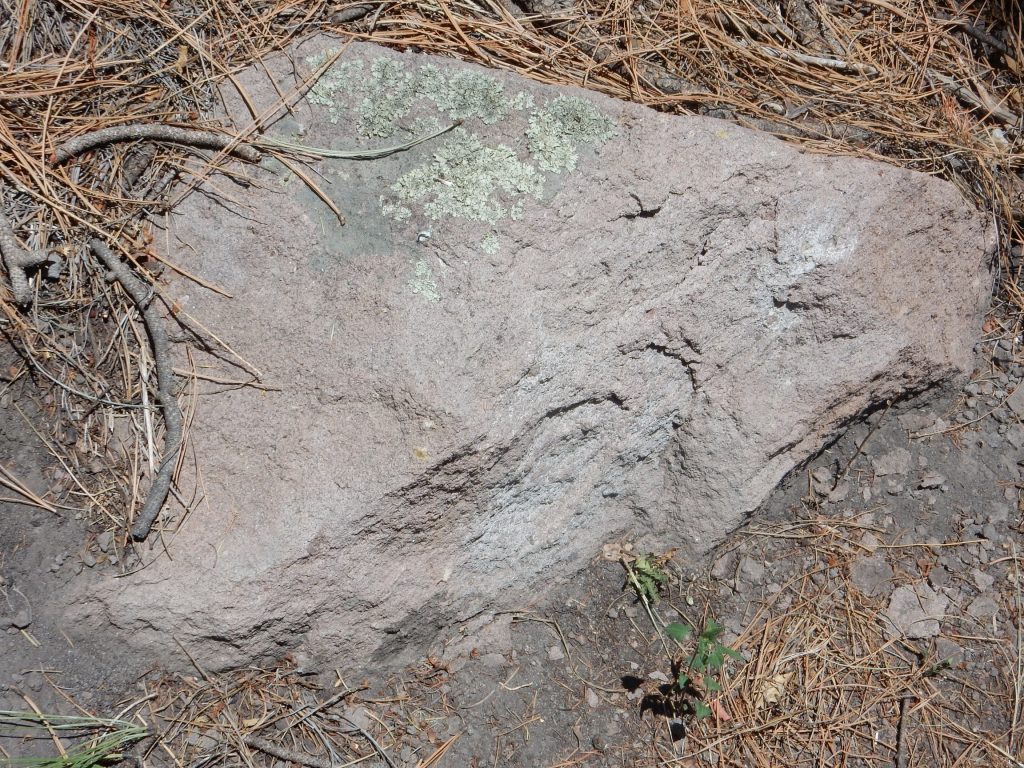 The Tsherige Member is quite variable over its widespread exposure, but this is typical of the member as it appears near the caldera rim: fairly dark in color, rich in quartz and feldspar crystals, and quite hard.  This is likely ash from fairly deep in the magma chamber, when it was nearly as emptied as it was going to get as the caldera collapsed. The ash was unusually rich in iron and a bit lower in silica than ash from higher in the magma chamber, and it contained more cystallized material.

A landslide of Tsherige boulders across the trail. 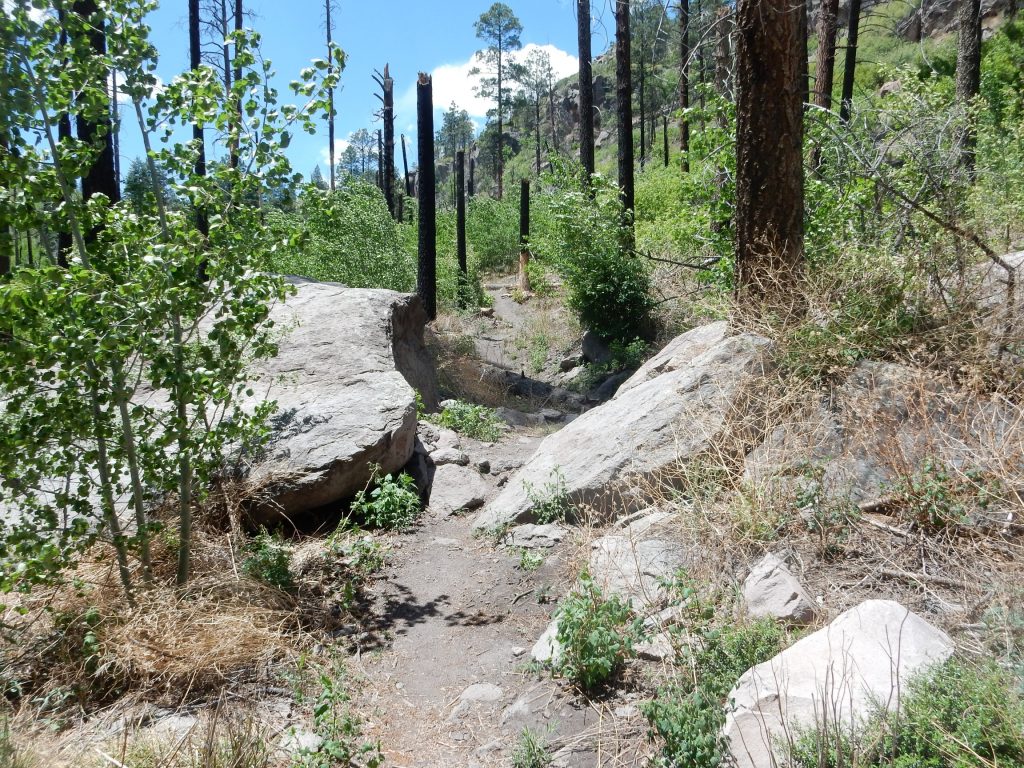 Approaching a fork in the canyon.

The cliffs to right are Tsherige Member. The fork to the left is where the beds are that I had seen the night before, but the trail took the main spur of the canyon to the right.

Where helpful signage confirmed I was on the right track. 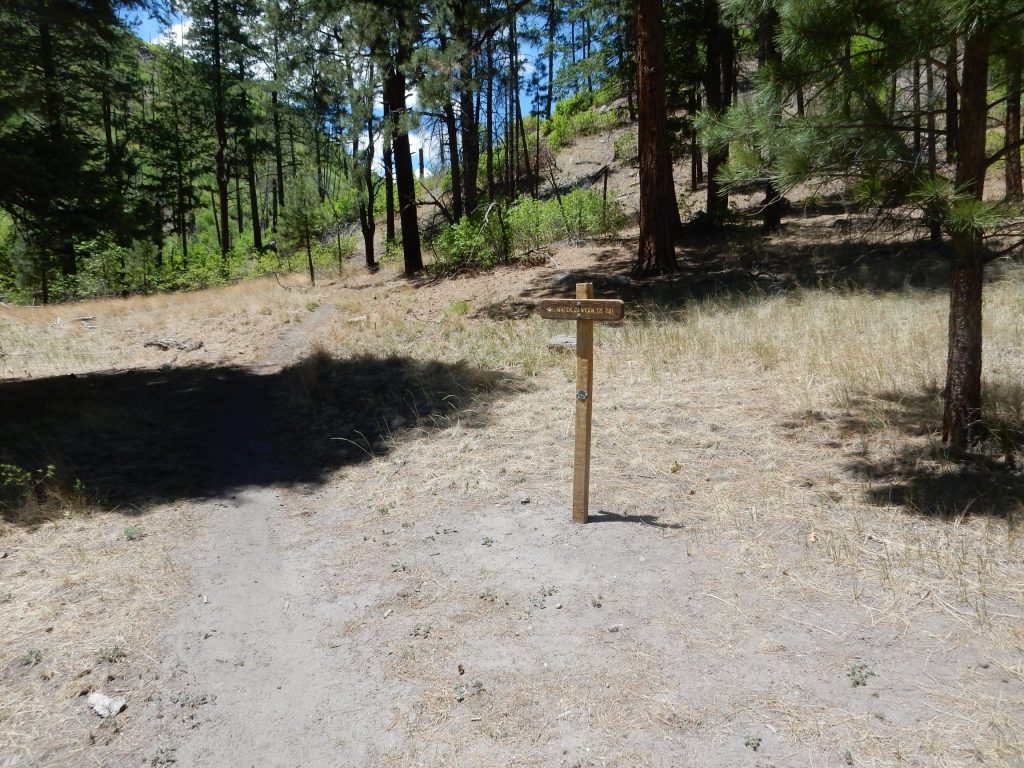 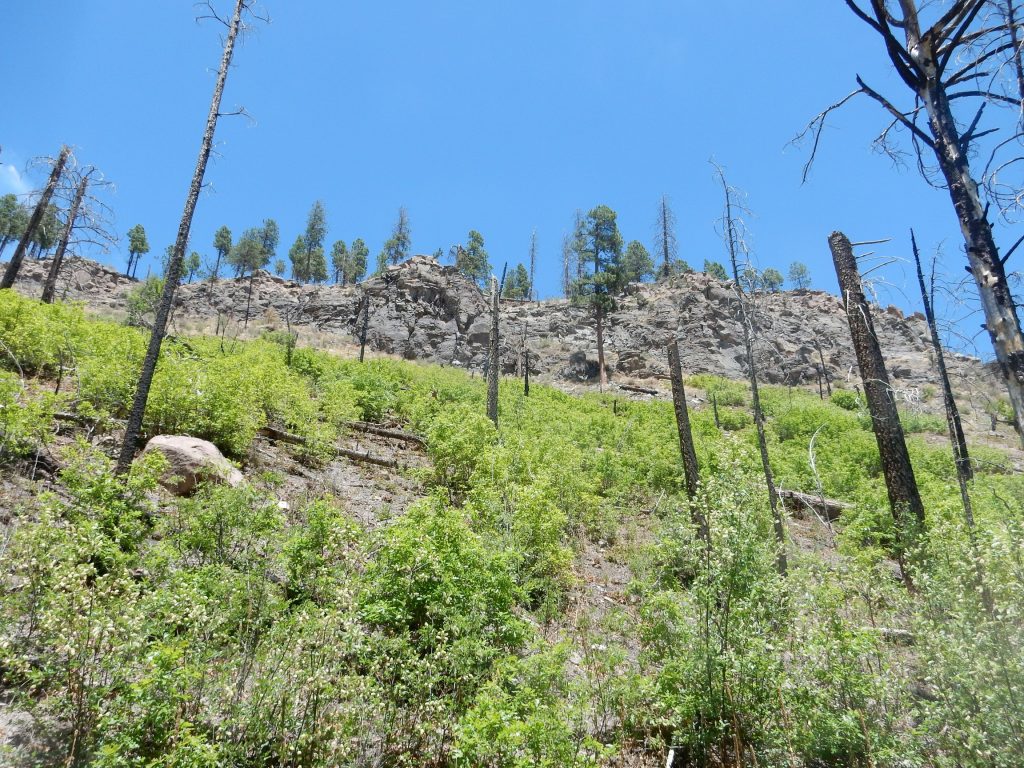 If you click to zoom in, you can see that the beds right of center, just to the right of the large tree, are particularly contorted. Most pyroclastic flows are thought to have been laminar, with relatively little turbulence; this would be an exception. 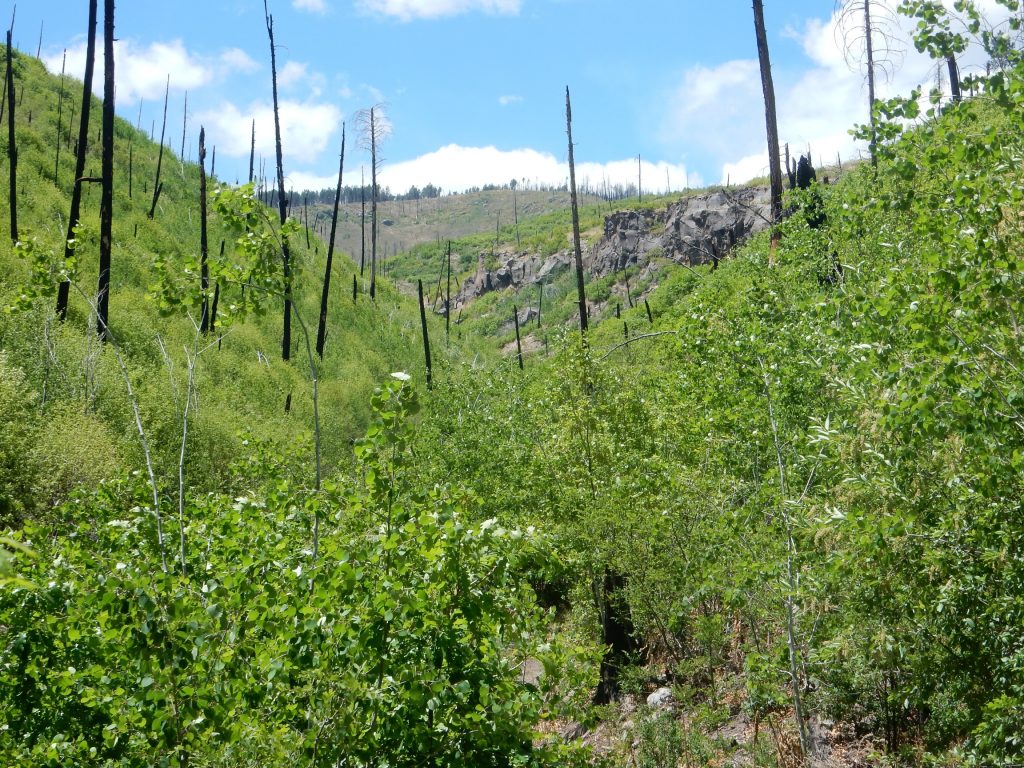 Finally, an exposure of the red beds comes into view. 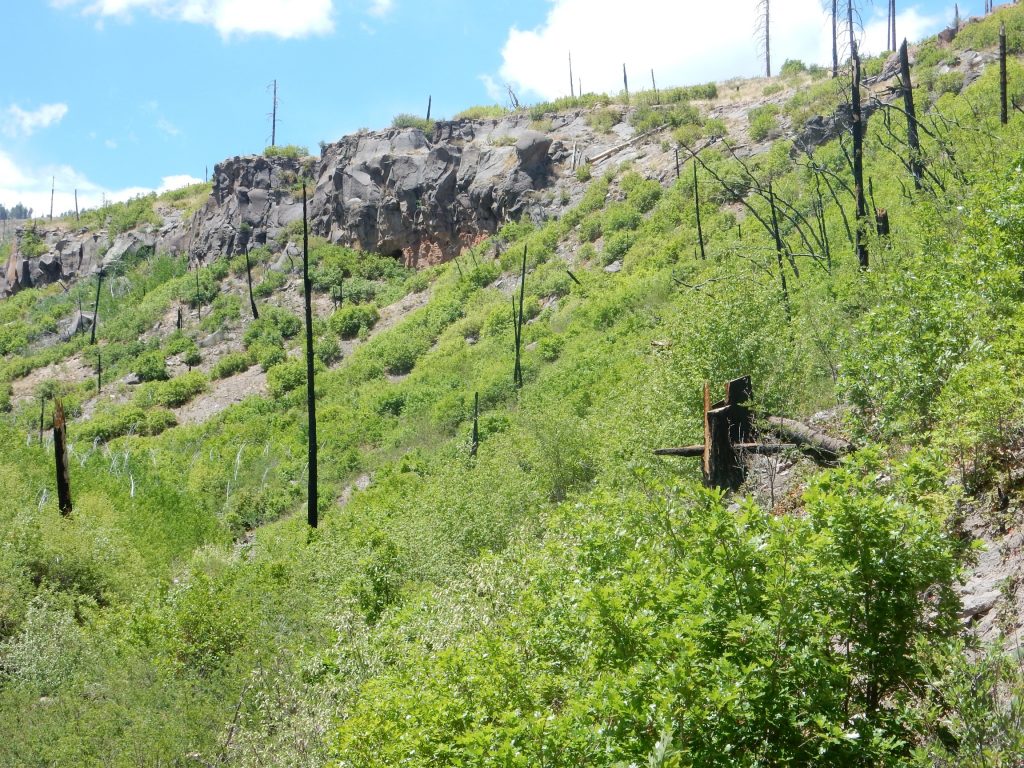 The trick is how to get to it. 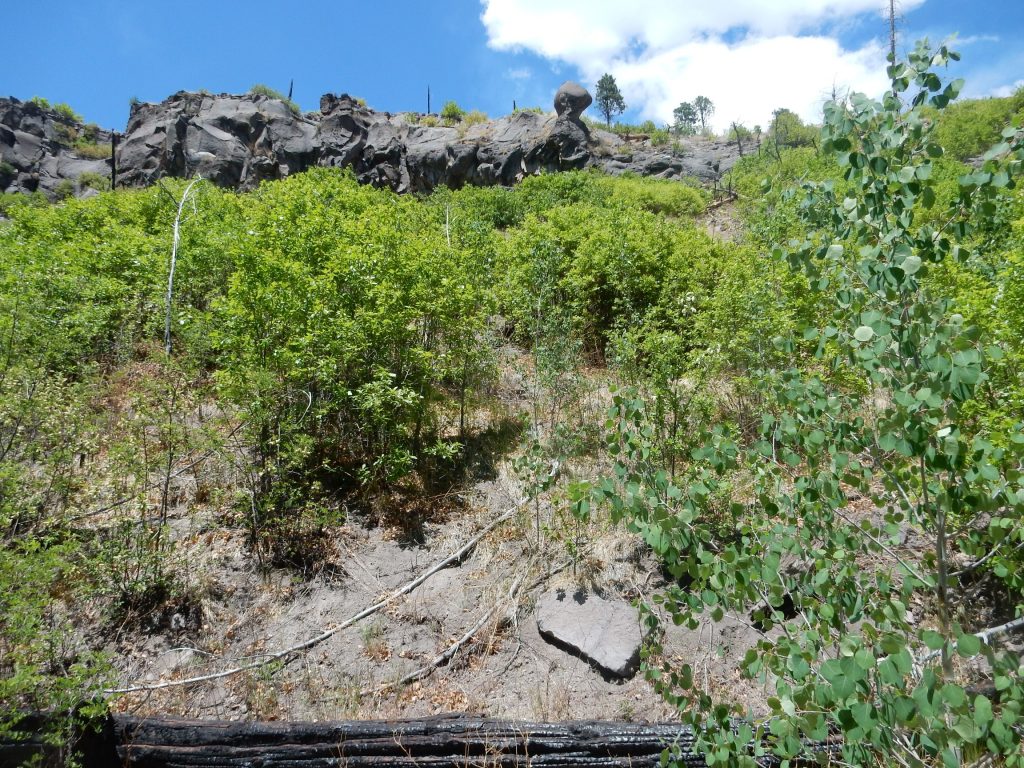 It turned out not to be too bad, actually, thought it took some time and care. (Yes, I had my SPOT-3 with me and activated.)

A boulder of Tschicoma Formation washed down from the mountains. 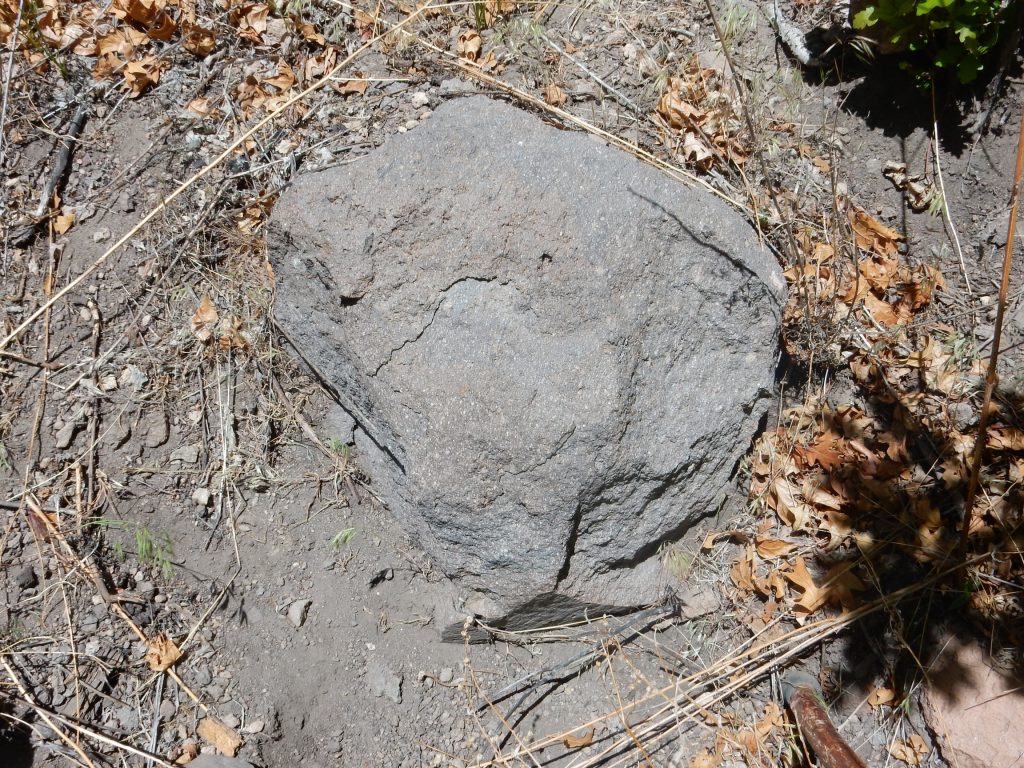 Distinguishable from the Tsherige Member because it is harder and has numerous white crystals of plagioclase feldspar, typical of dacite.

My first good look at the red beds. 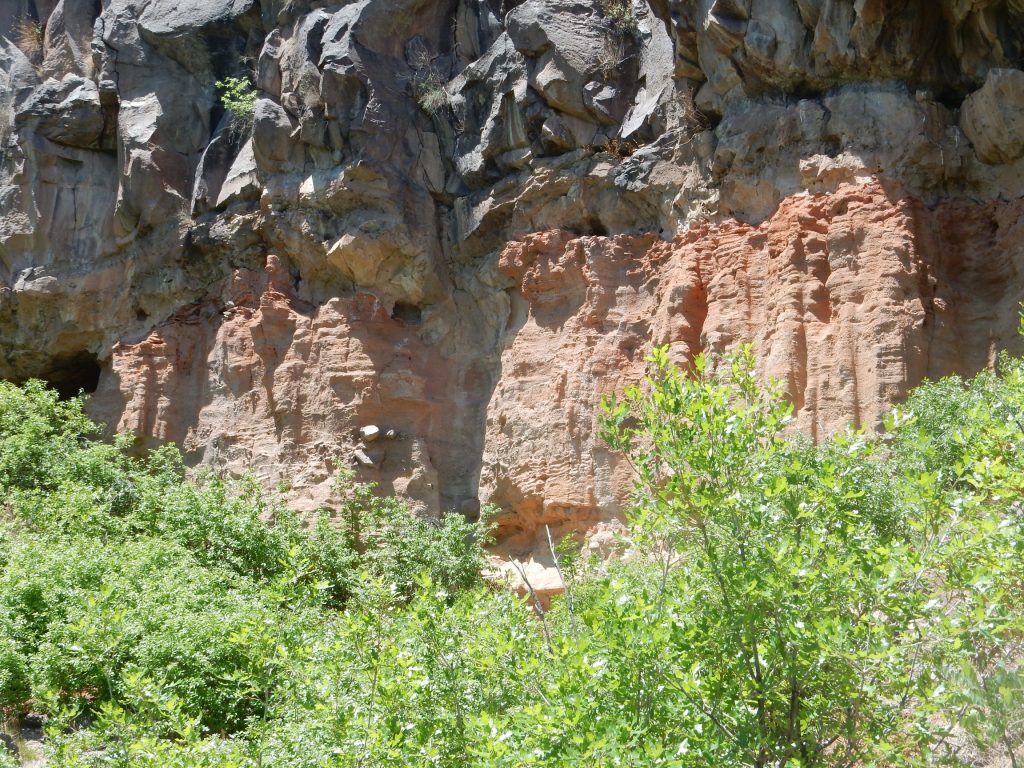 The beds are quite thinly bedded, and there are some dark boulders in some layers. A close look shows that the bed is a mixture of pumice, poor obsidian, and finer sediments. 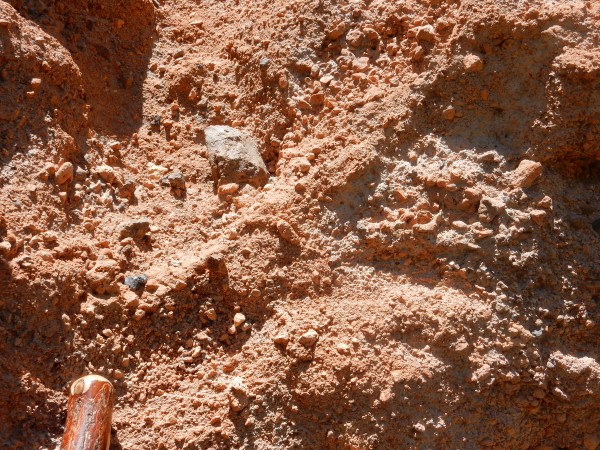 Some layers are almost pure pumice. 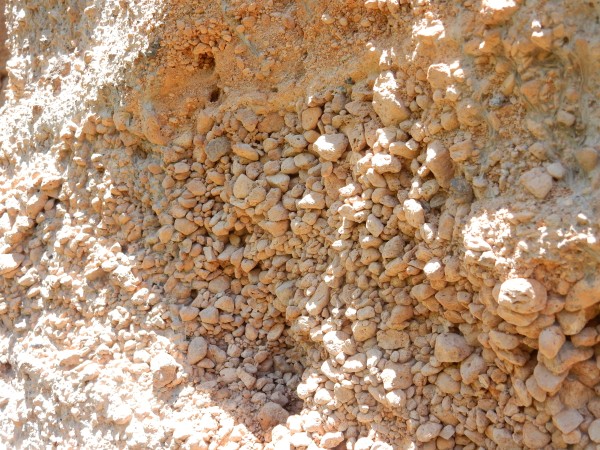 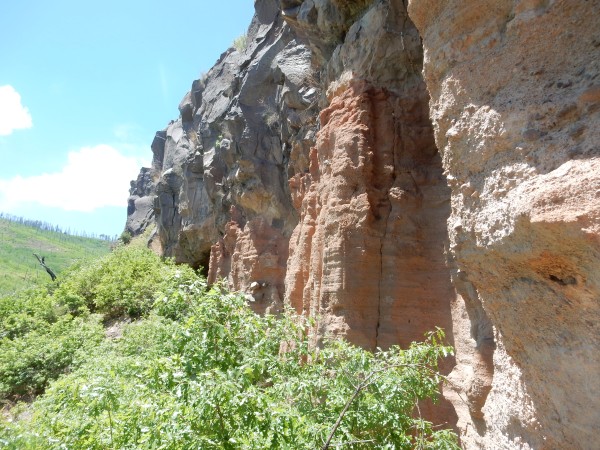 I grabbed a sample and started down. The slope was steep and loose, stirring up unhappy memories of breaking my ankle last fall, but there was a lot of oak shrubbery to hold on to and I made it down fine.

A boulder of conglomerate, presumably from this outcrop. 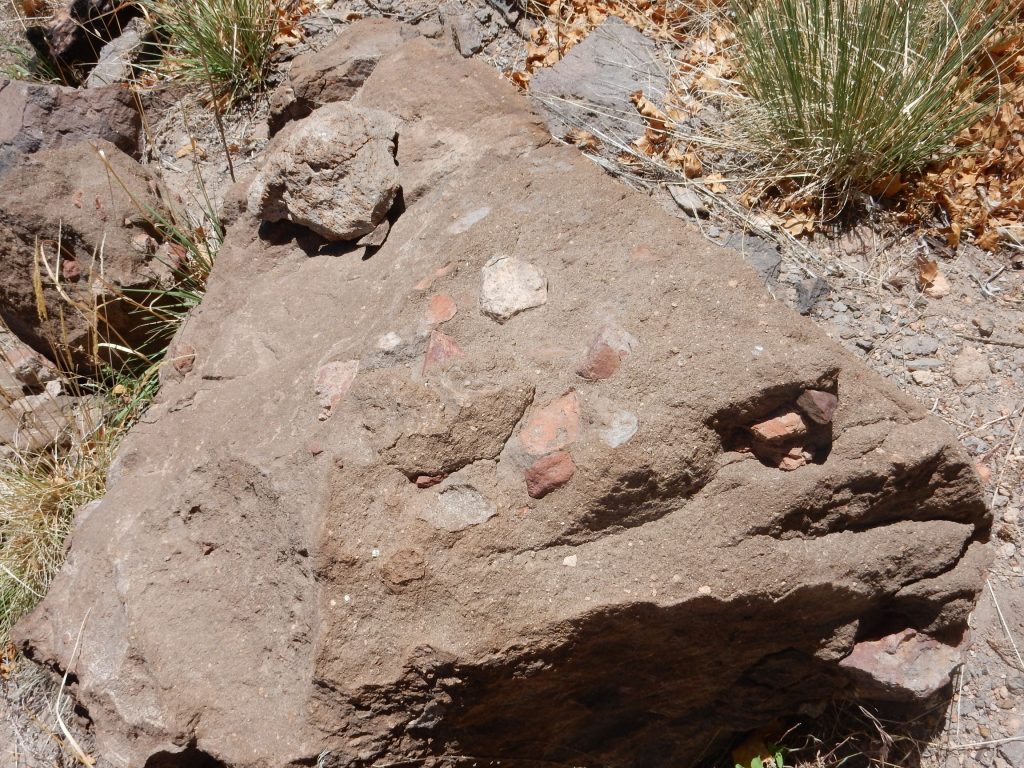 So, what can I infer about these red beds? They’re located underneath verified beds of the Tsherige Member of the Bandelier Tuff. That makes them over 1.25 million years old, and rules out the possibility that this is the pumice-rich Golf Course Alluvium (which underlies Los Alamos County Golf Course) or the El Cajete Pumice, both of which are too young. Other known pumices of the Los Alamos area are the Guaje Pumice and Tsankawi Pumice, both of which are air fall pumices, or the Cerro Toledo Interval. I can probably rule out an air fall pumice, because the thin bedding, admixture of non-pumice sediments, and layers of large bounders indicates this is a pumice that has been reworked by water. That points to the Cerro Toledo Interval.

The Cerro Toledo Interval is a bed of reworked pumice and other sediments often found below the Tsherige Member or Tsankawi Pumice (the latter being an air-fall pumice that immediately preceded the Tsherige pyroclastic flows.) The pumice in the Cerro Toledo Interval is thought to have come mostly from domes that erupted along the ring fracture of the Toledo caldera, which formed 1.62 million years ago in roughly the same location as the more recent Valles caldera. There are particularly thick beds of Cerro Toledo Interval sediments north of Los Alamos, but it occurs here and there throughout the Pajarito Plateau.

I retraced the trail back to my car, went and purchased my groceries, and headed home.