Day 4 may be found here.

I’m up early; the house is still fairly quiet. I decide to quietly cook my usual pancake breakfast, then clean up my dishes and the rest of Lisa’s kitchen. Alas, that does not quite work out. Tim, their third son, emerges halfway through my culinary preparations. He makes the suggestion that when his family crack open a pack of bacon, they pretty much eat the whole thing. Well, Scott and Lisa have six kids; it’s not implausible. I decide I’ll cook up the whole pack for the family. And then Lisa comes in just as I discover that I’ve burned the pan I was boiling my steel cut oats in. She’s gracious about it, but when I suggest I owe her a new pan, she doesn’t disagree.

Breakfast guiltily consumed, I head to Dry Canyon, which is very close to my brother’s home. I want to hunt fossils in the early Paleozoic beds exposed here. The rising sun conspires with the clouds to give me a lovely picture. 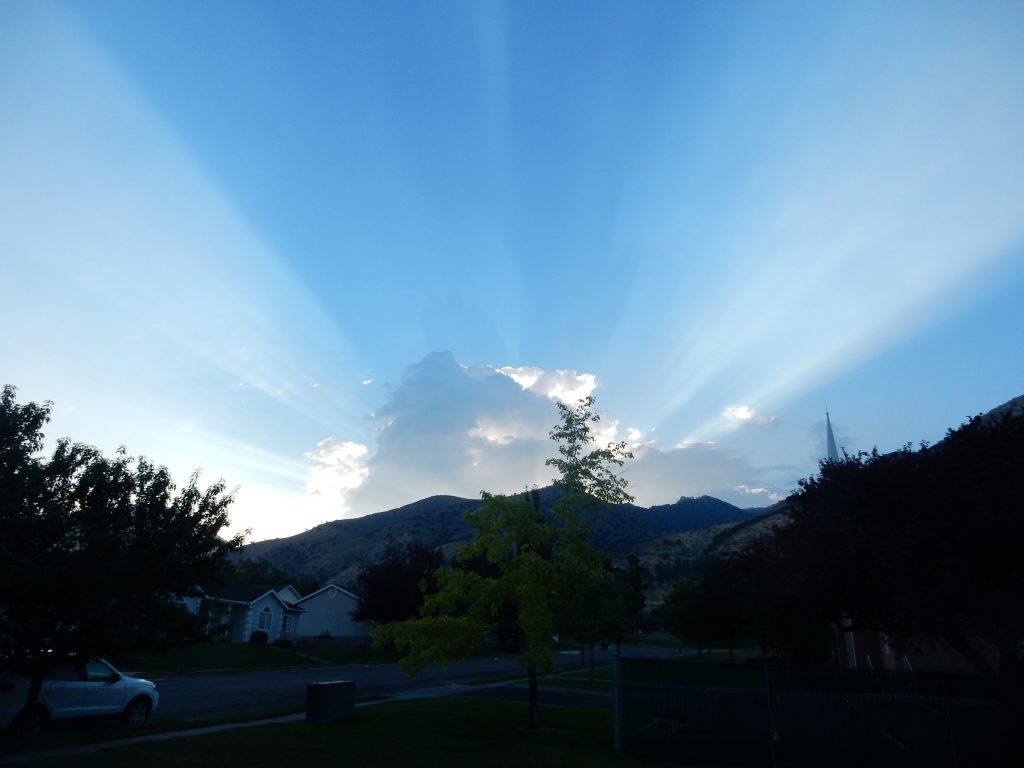 I arrive at the mouth of the canyon, harness up, and head out. 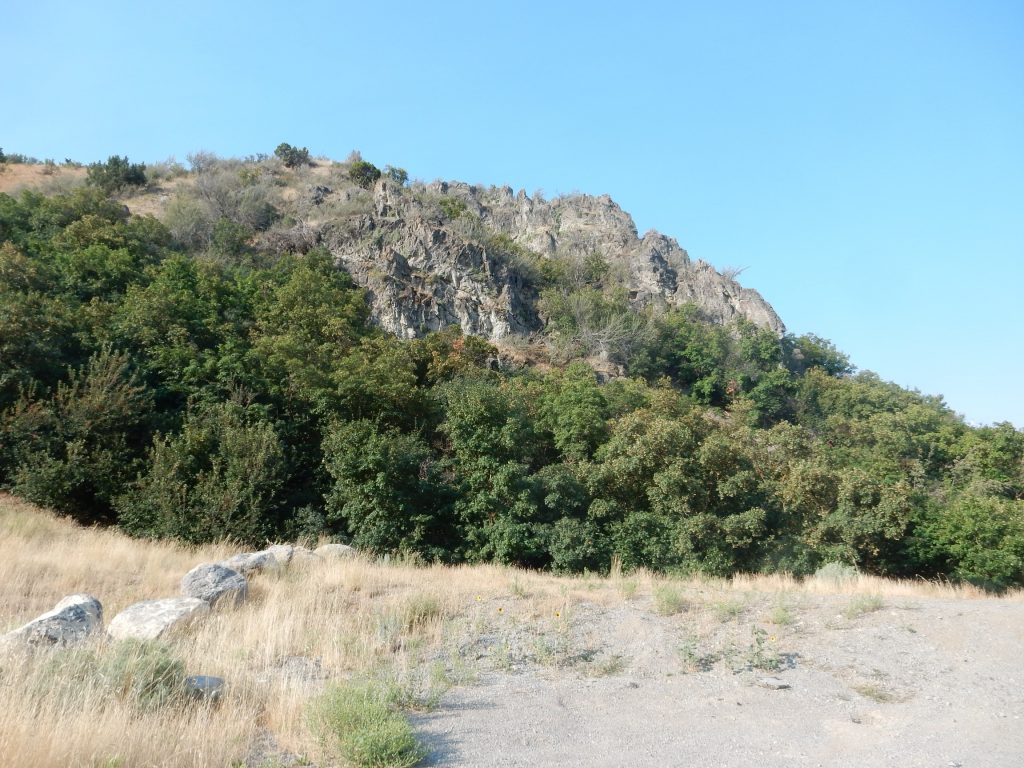 The beds at right are likely St. Charles Formation, which straddles the Cambrian-Ordovician boundary, 485  million years ago. It’s mostly marine limestone from when Utah was a shallow sea off the west coast of North America. My geologic map does not mention fossils, but it would be way cool to collect my own trilobite fossil. The gray beds at left center are likely Ordovician Swan Peak Quartzite, while the soil-covered area at far left is likely Silurian-Ordovicin Fish Haven Dolomite (around 443 million years old.) (I will not actually sort all this out until after I get home and compare map with GPS; all I know at the moment is that these are early Paleozoic beds.)

There is a steep trail up the canyon wall. I scramble.

This is almost certainly St. Charles Formation. The trail heads east; there are some impressive beds here. 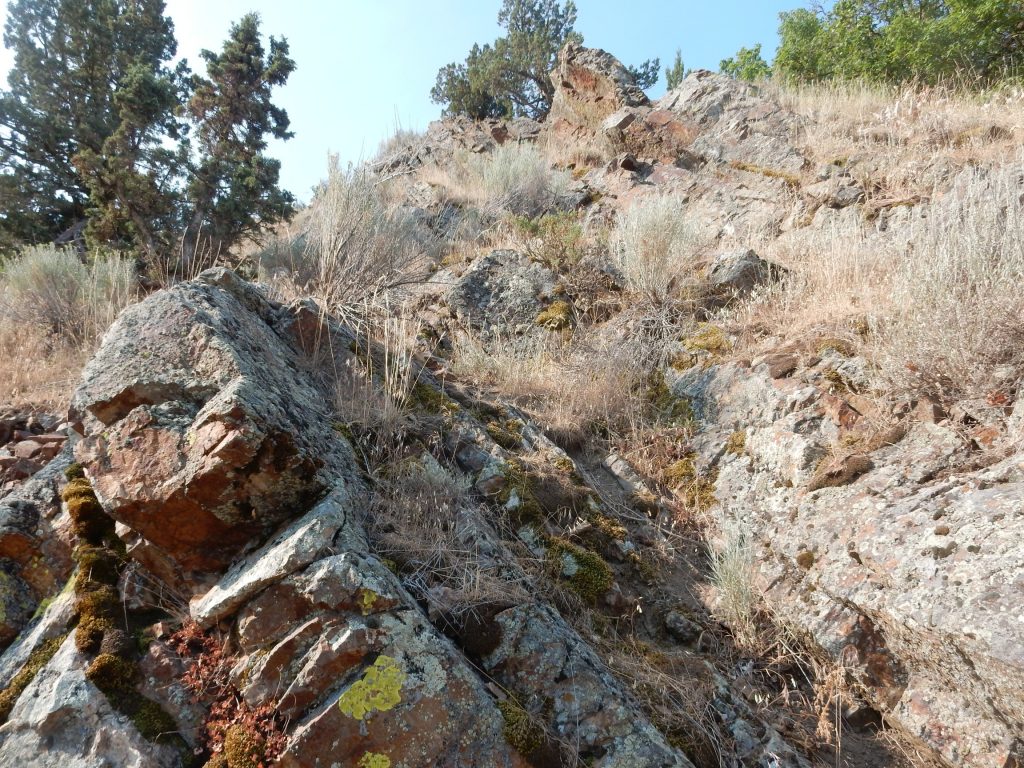 This is likely Silurian Laketown Dolomite. Again, no fossils.

A view of the south wall of the canyon from near the flood control dam. 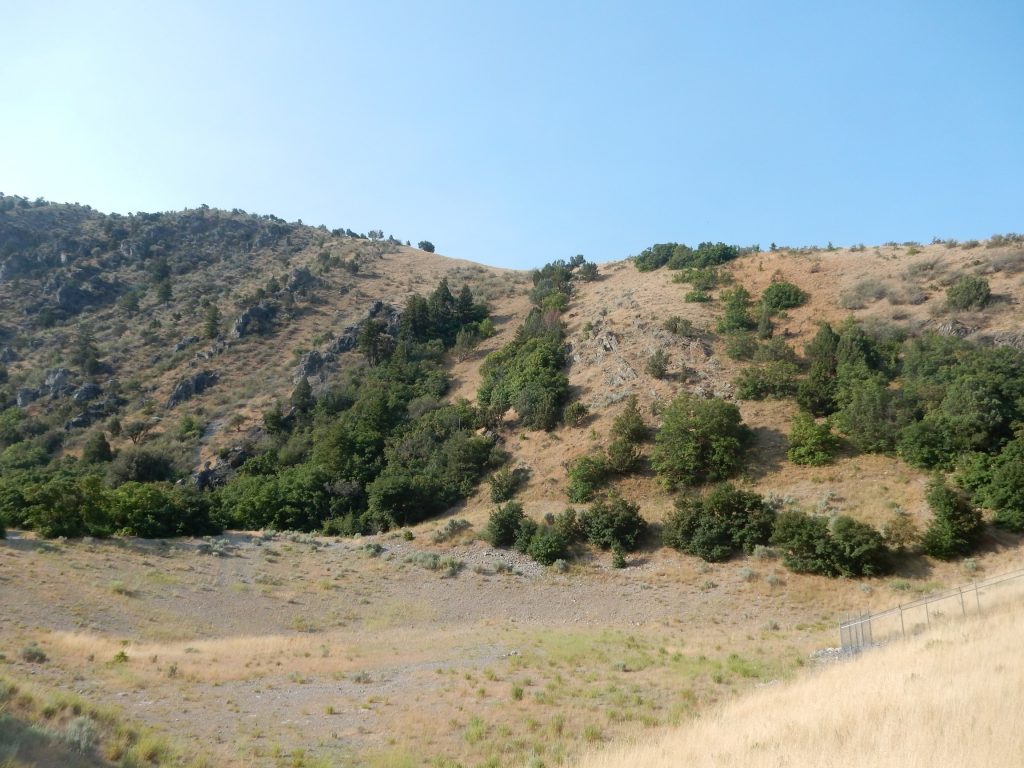 The low saddle at center almost certainly marks the trace of a thrust fault, where the rock at left has been thrust over the rock at right. However, the displacement is not great, and the rocks at left and those just right of center are both Laketown Dolomite. The red band at right would seem to be a distinctive formation discoloring the soil, but nothing quite like it is described in the geologic map. From its position, perhaps Ordovician Fish Haven Dolomite?

A peculiar boulder along the trail. 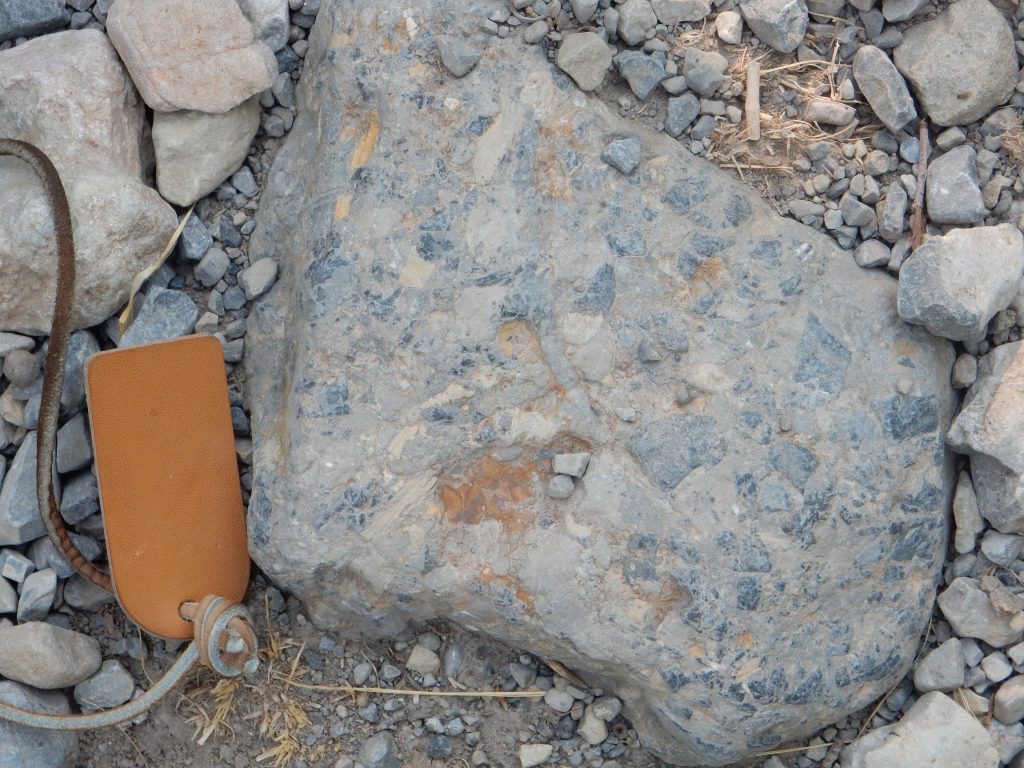 Because this is a boulder washed down the canyon, it’s hard to be sure what formation it came from. The surrounding walls are Laketown Dolomite, described as a sugary-textured dolomite. Nope. Further up is the Devonian Water Canyon Formation, whose description mentions that some beds are breccia. Yup. But no fossils.

Further up canyon, I work my way to the canyon wall. 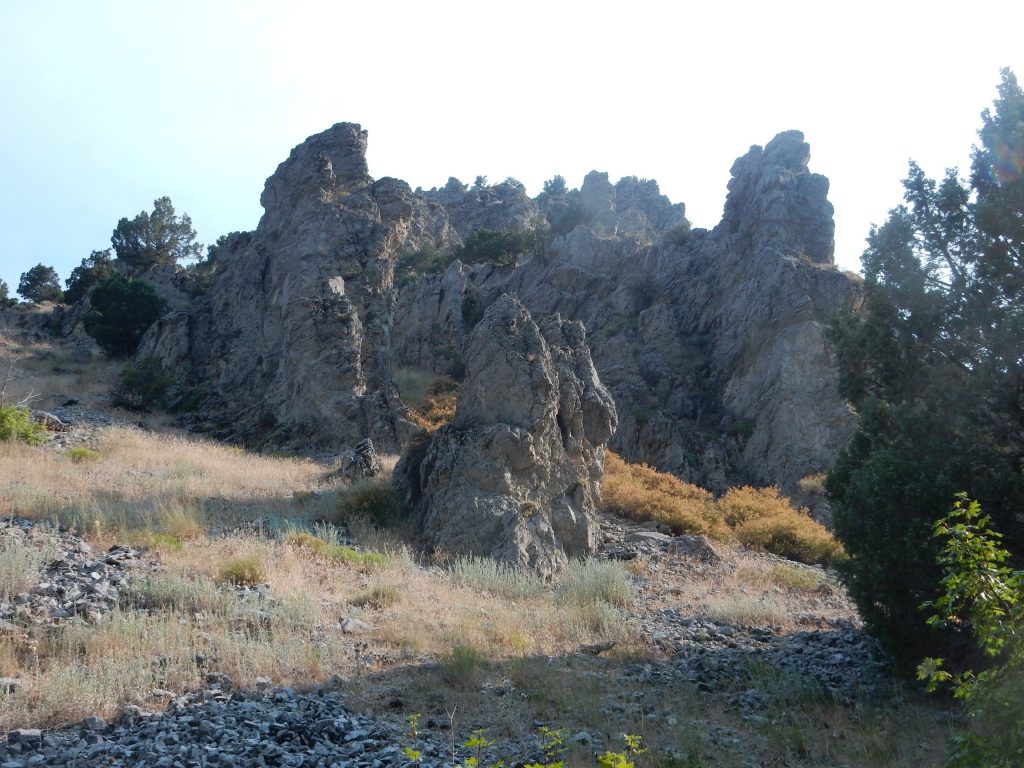 I am examining a boulder. A couple of student-like persons pass by. “Whatcha looking for?” “Fossils.” “You know the area?” “No, it’s new to me. But there are early Paleozoic beds here not found back home, and it would be way cool to find a trilobite.” “There are great trilobite beds at Wellsville; Google it.”

More of the dolomite beds. 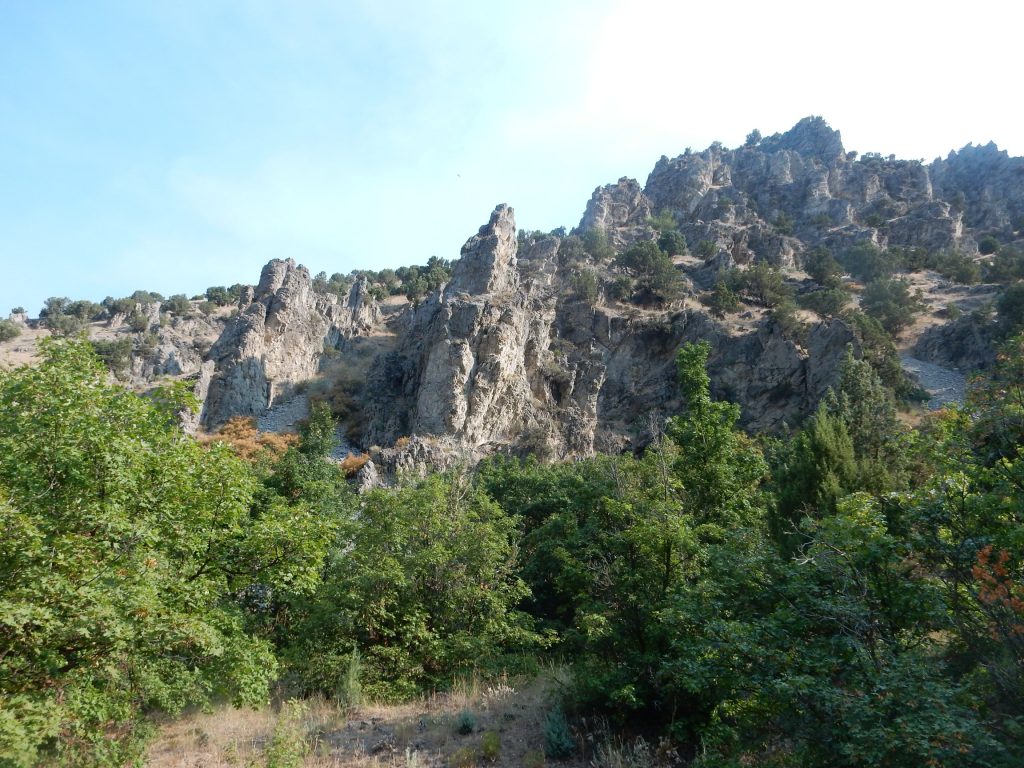 I come in view of a small side canyon to the south. 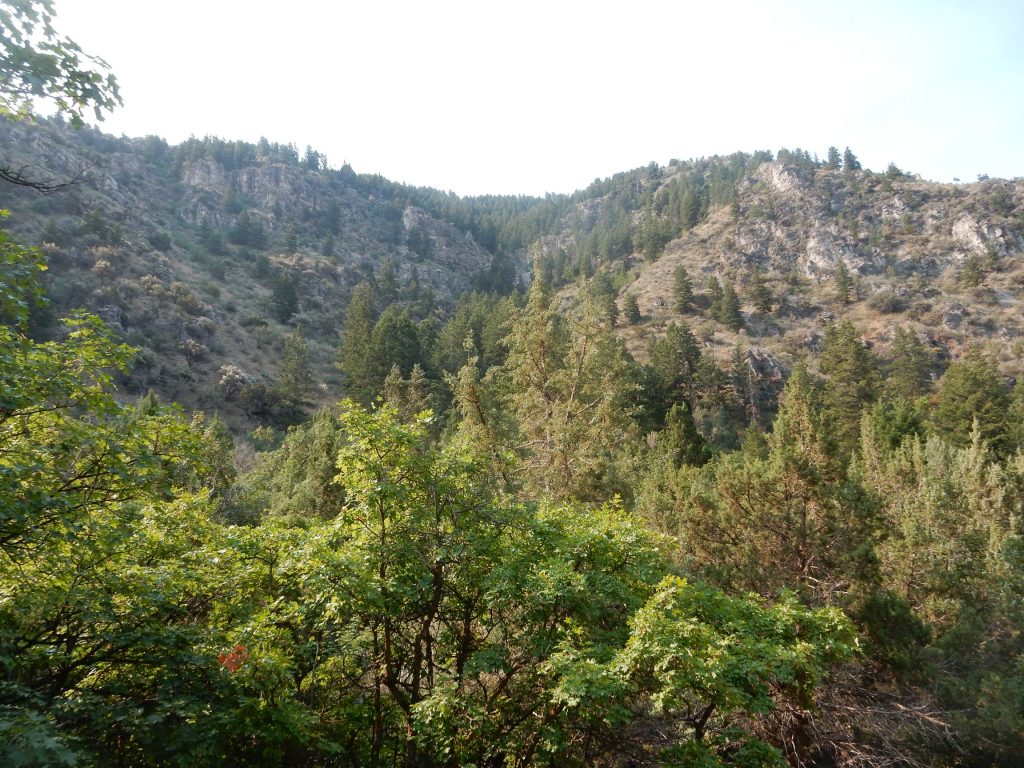 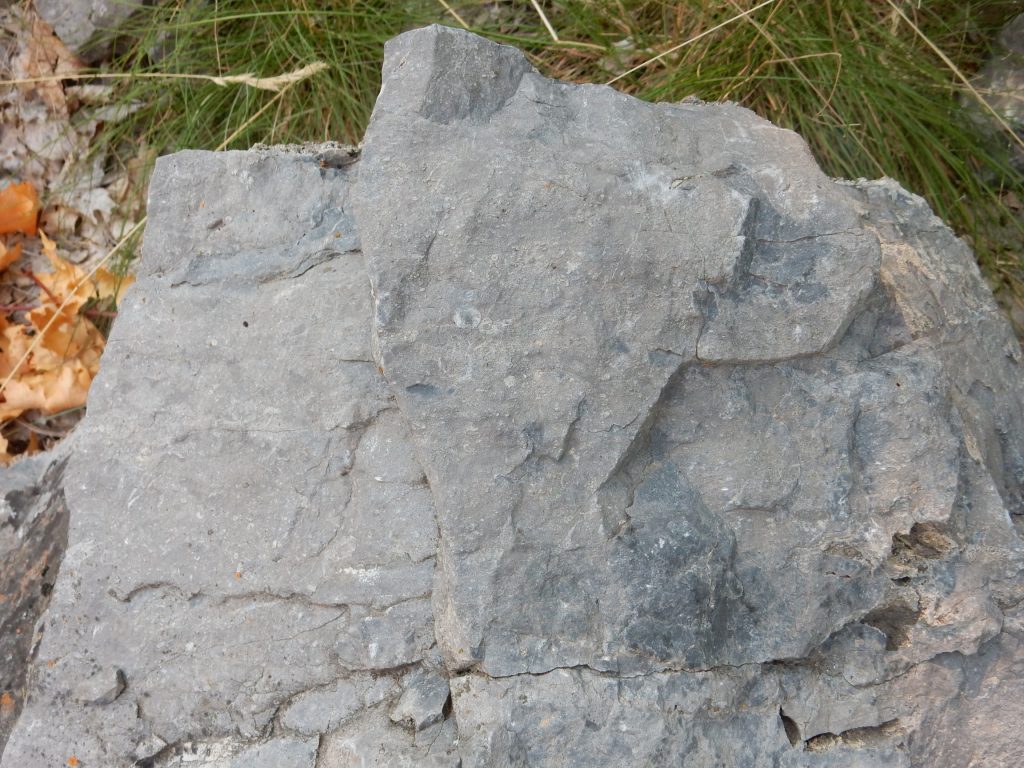 A single crinoid stem segment. In a boulder of unknown provenance. Well, crinoids first appeared in the Ordovician (and still exist today) so I can at least rule out the Cambrian. Which, since Cambrian rocks are only exposed at the canyon mouth, I could have already ruled out …

Here are some nice beds. 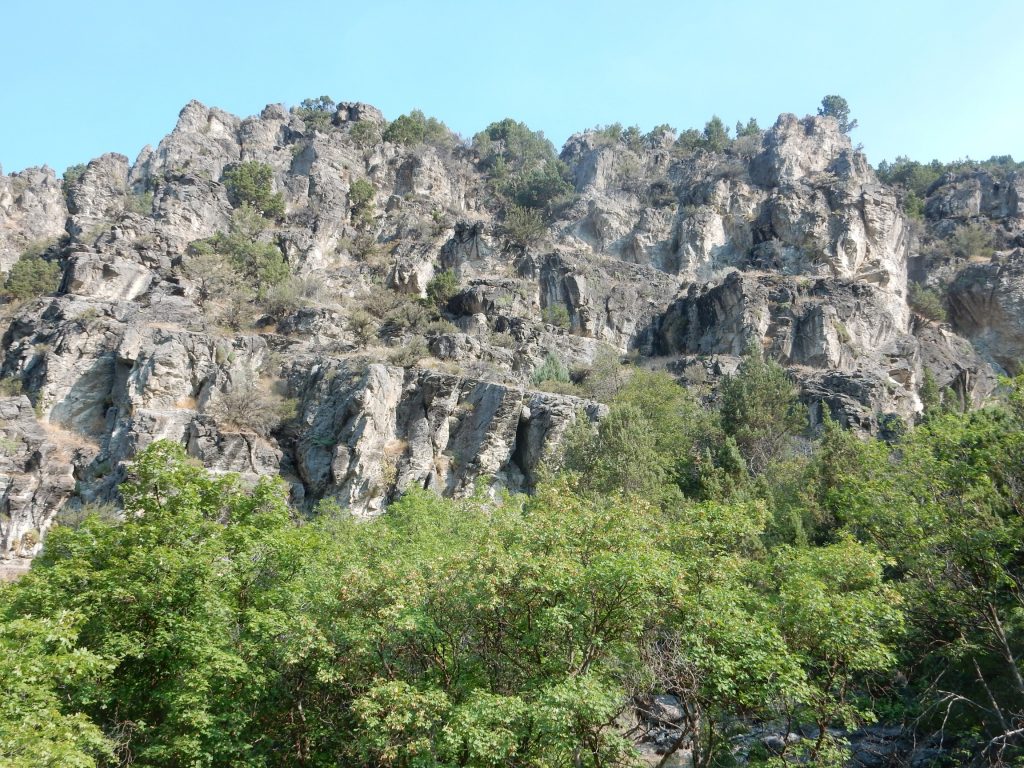 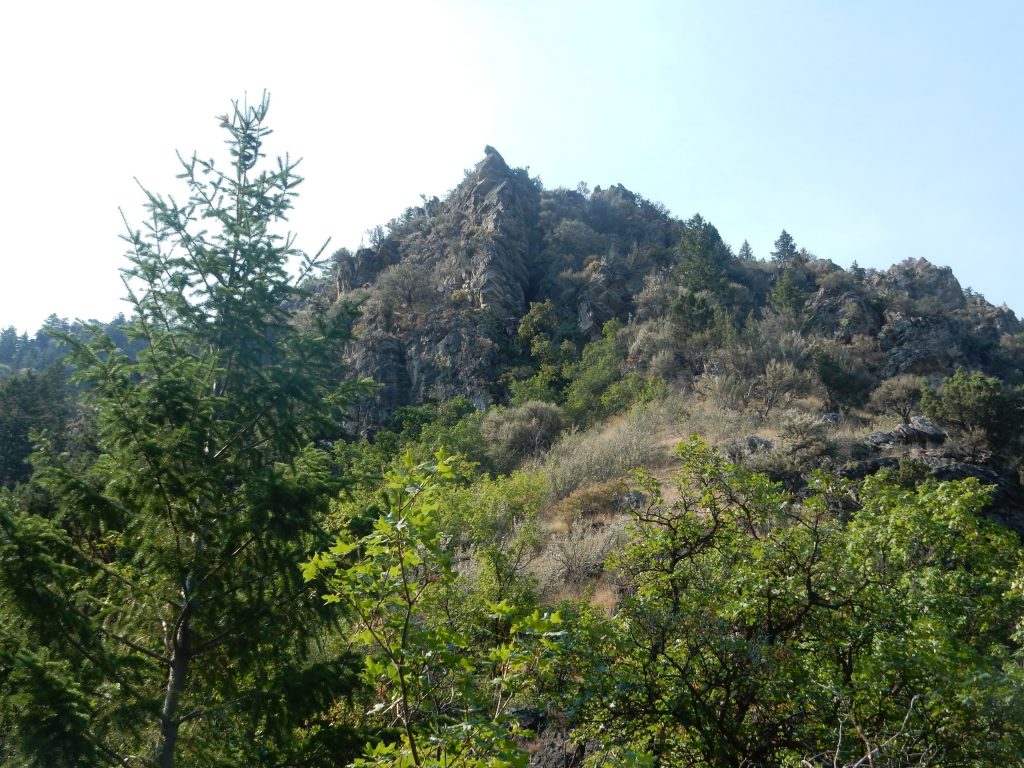 This has got to be the Water Canyon Formation, described as a massive, cliff-forming dolostone. Not actually much different from the Laketown Dolomite, except in age. Which is determined by fossils. Of which I haven’t found any yet. 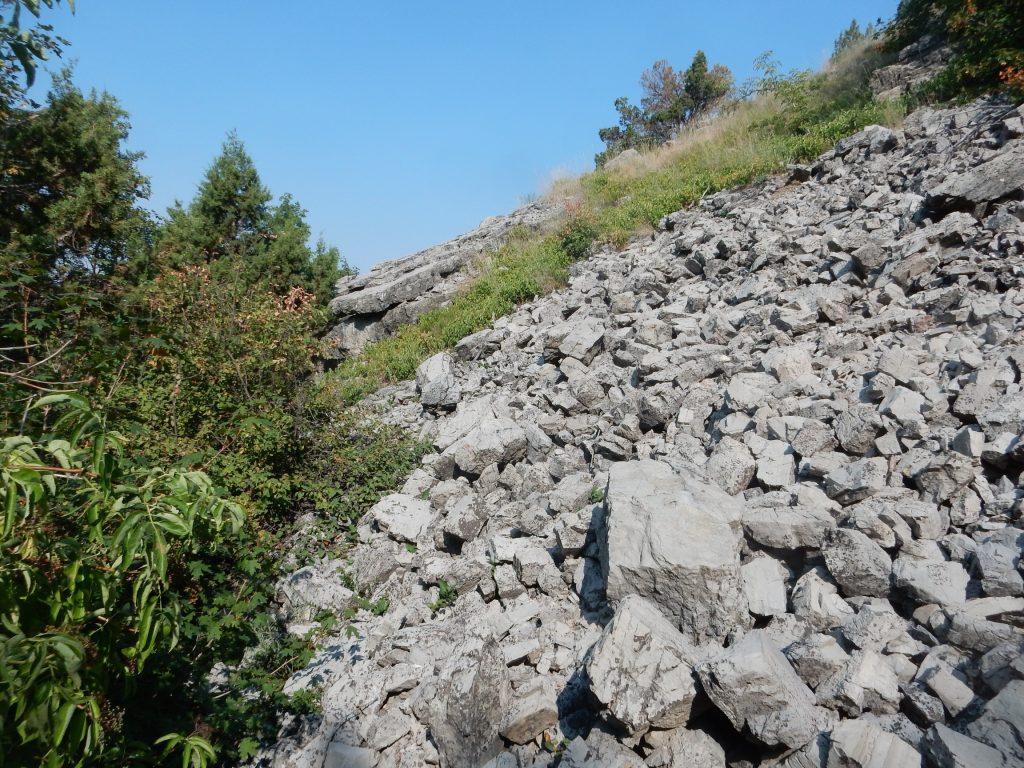 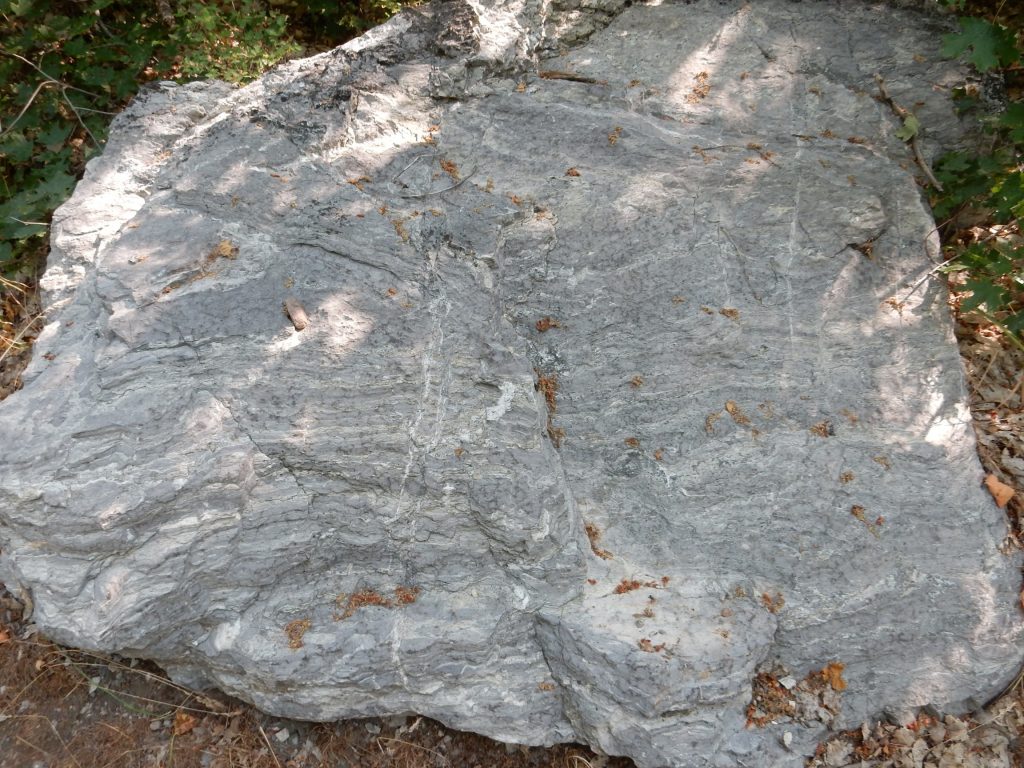 We’re far enough up canyon that I’m going to guess this is Water Canyon Formation.

The trees are closing in. 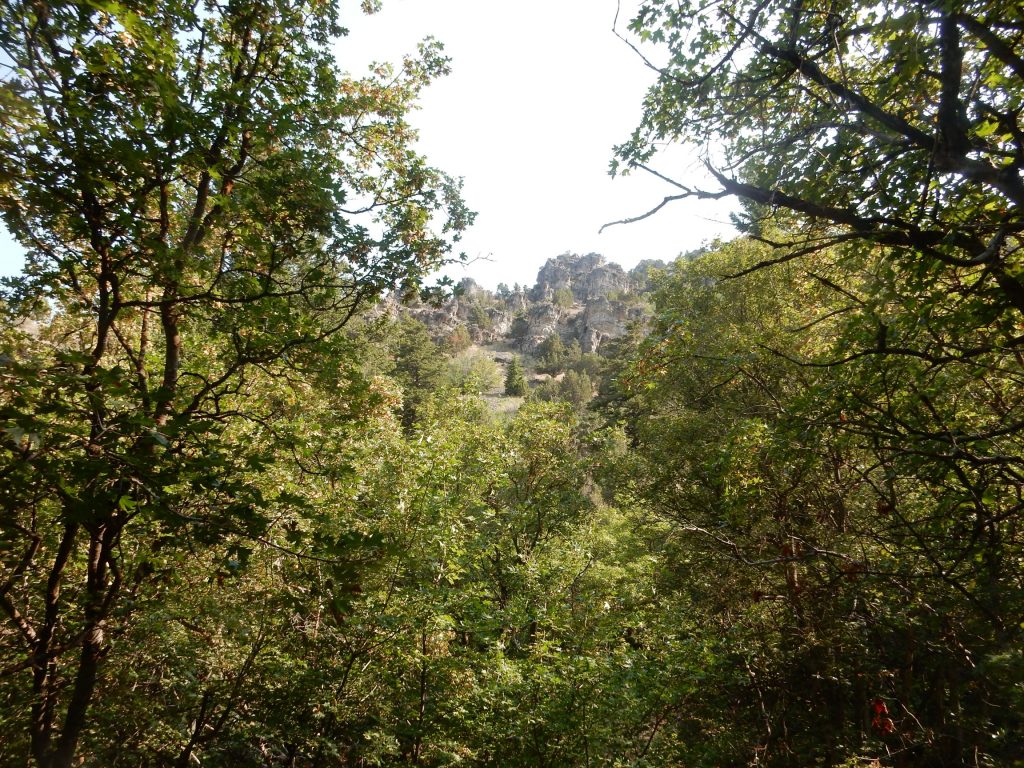 I can’t be sure if that’s Water Canyon Formation or the next formation up, the Devonian Hyrum Dolomite. 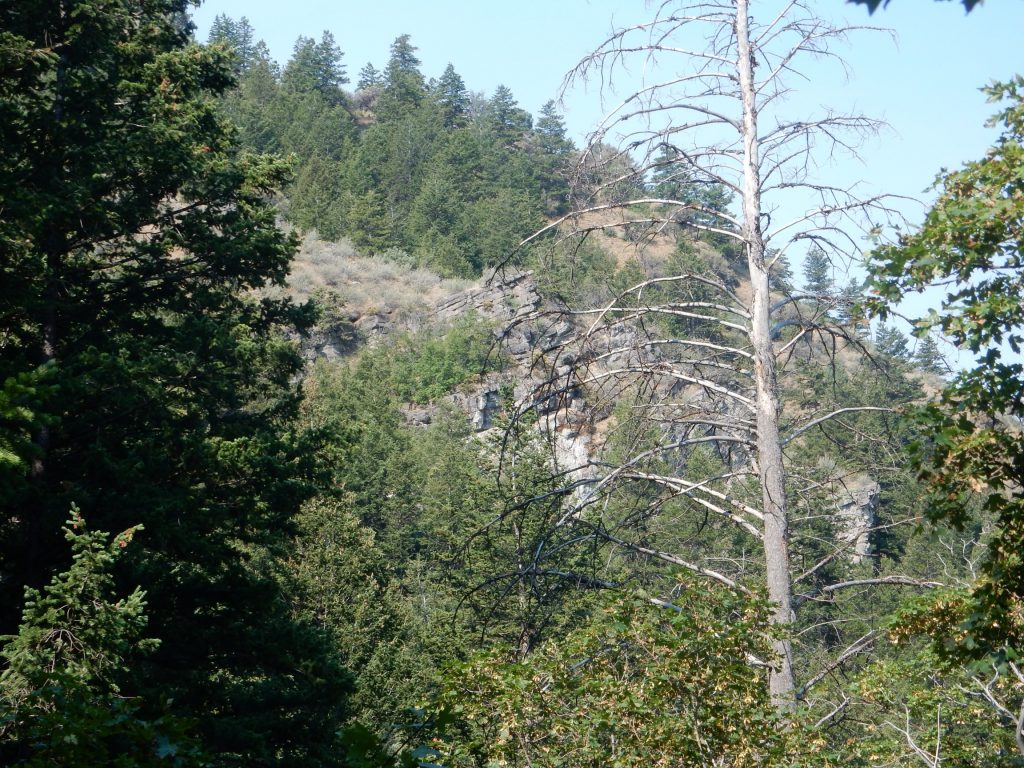 Plenty of canyon to go, but I’m out of time, and the trees are obscuring the view. I head back down.

There is a Wal-Mart in town. I buy Lisa the new pan I owe her. The family gathers again. 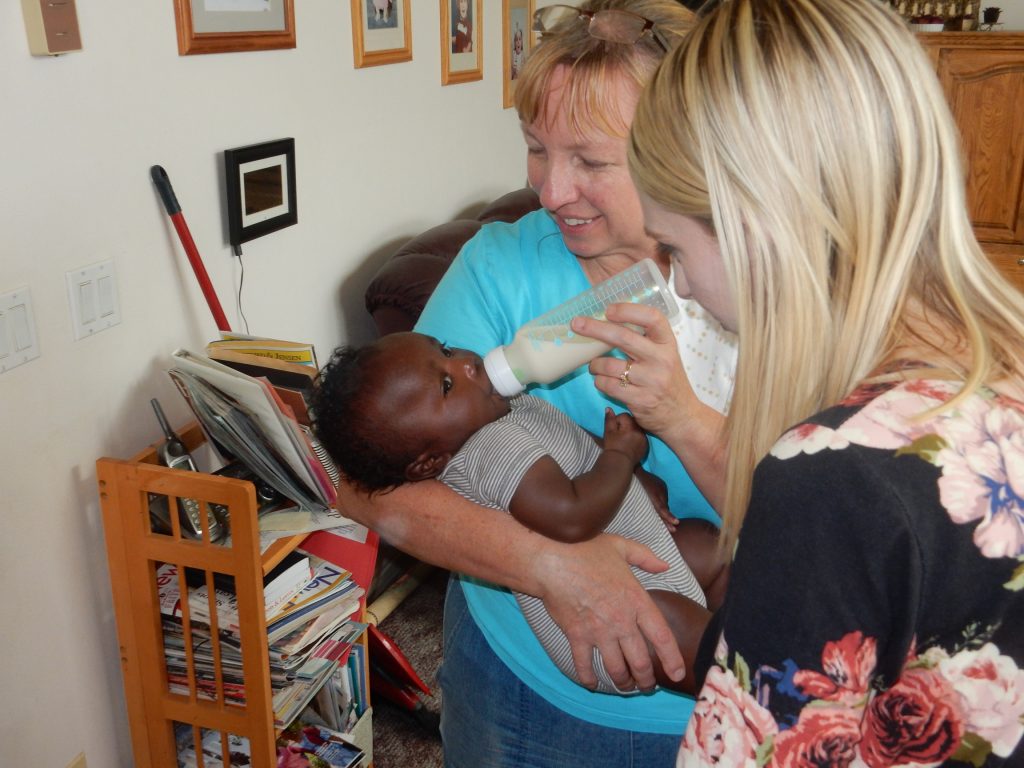 Being fed by Lisa. He’s actually Lori’s grandson, but everyone shares the babies around here. The other woman is Jenni, Scott’s oldest daughter. 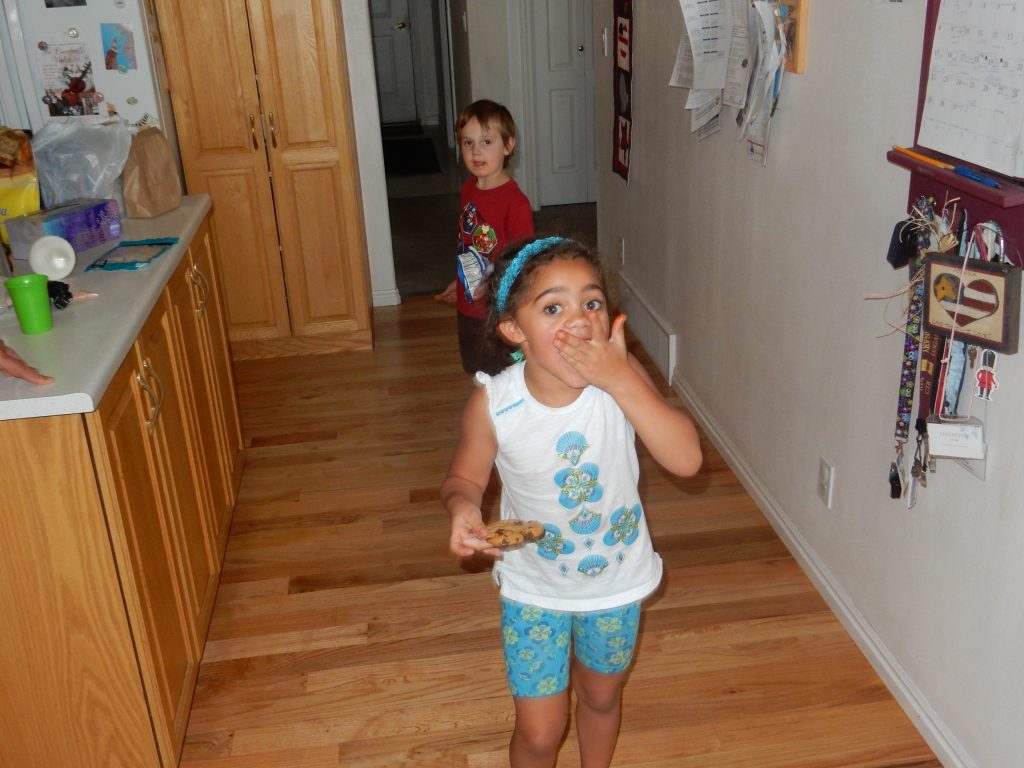 With Tucker, another Lori grandson, in the background. 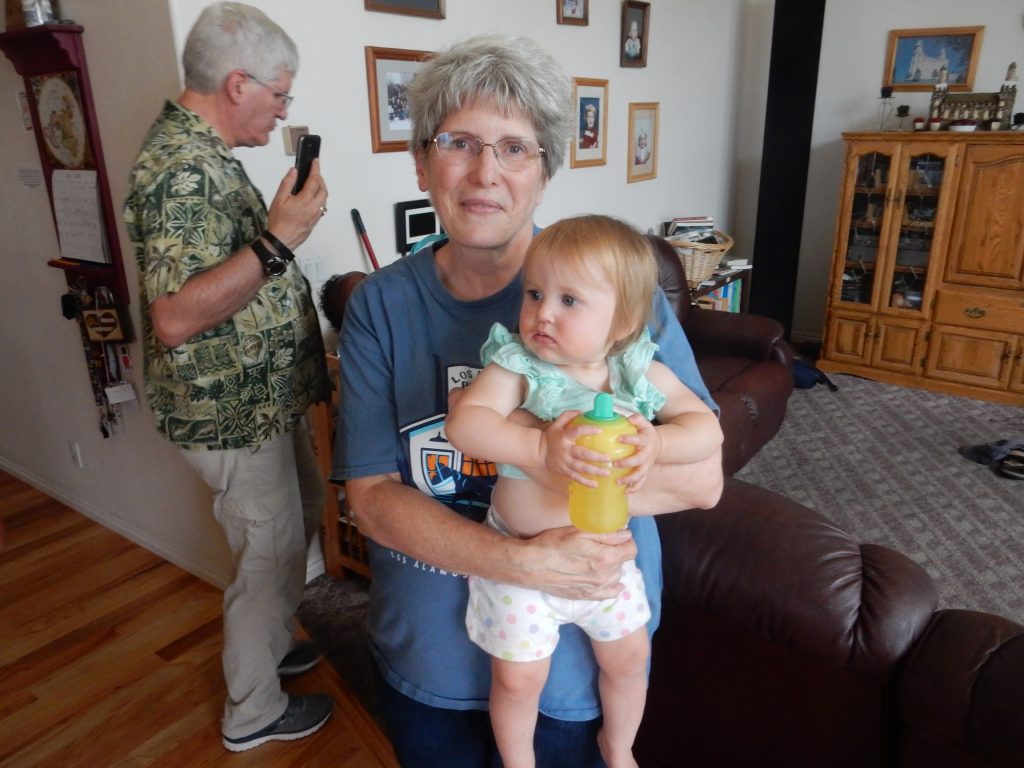 Annie is at the incredibly cute age where she walks like a lizard, with her knees bent outwards.

Mom and the siblings attend the Utah Festival Opera. Scott is somewhat acquainted with the director, Michael Ballam, through mutual church service. I overhear Dr. Ballam telling a distinguished visitor what a devil of a time he had getting the Opera going, but it seems to be a success. The performance is The Secret Garden, and it is very well done.

We have another big banquet, then the siblings babysit the great-grandkids while the grandkids do one of these escape puzzle things that are popular in Utah. While babysitting, we continue to get caught up on the family doings.

The sky is miserably overcast with smoke from the nearby fires. I still haven’t had occasion to get the scope out yet.

Next: The bear necessities