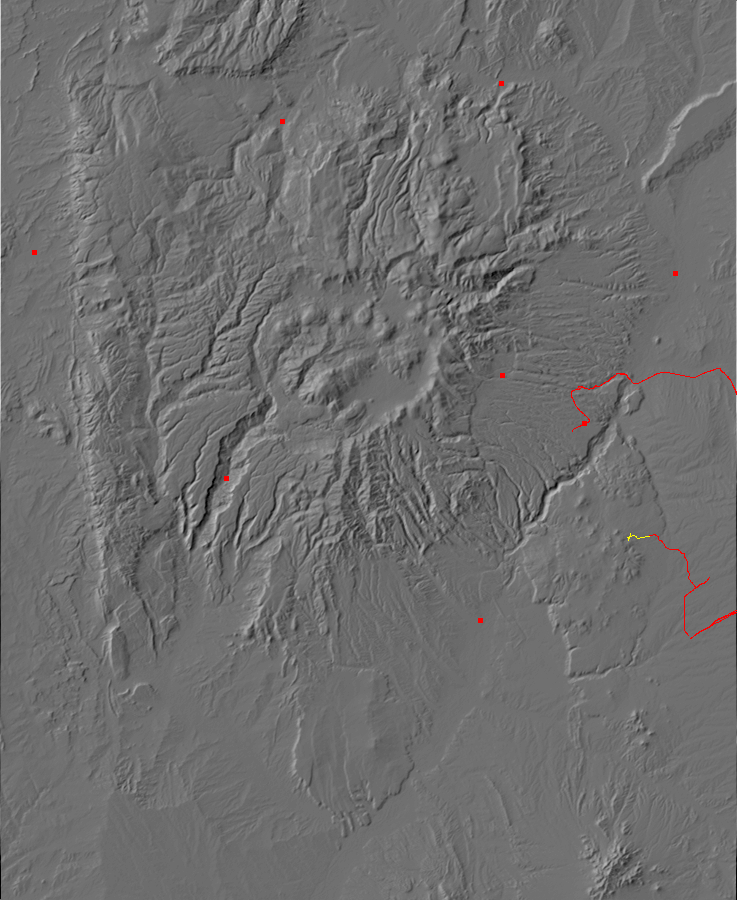 The Monday after getting back from vacation, I call my favorite mechanic about the leaking tire. He says to bring it on in. I do the next morning and he finds a screw in it and patches it.

Thursday Cindy reports that the low tire light is on again. Crep. Friday morning I check it; very low. I go and pump it up and drive in to work, thinking I’ll have my mechanic look at it again. But then I decide not to. The tires still have some tread but are not new, and I need to be able to rely on the car. I decide to take the car to Santa Fe Saturday, where I had business anyway, and see if the tire dealer thinks they’re worth repairing rather than replacing. (One suspects they will be biased in favor of replacing, but I’m okay with that.)

I arrive. The proprietor looks at my tire and pronounces them all in need of replacement. And the wear is uneven; my alignment may be off. I look at the tires, and decide he has a point. How much to replace? $600. Ka-ching! I’m used to the cheap little tires I put on Clownie the Wonder Car; but an XUV is a lot bigger vehicle. I decide to replace the rear two tires today and do the others in a couple of months, when my budget has recovered. He’s okay with that.

I walk around the neighborhood for an hour. I decide I don’t know which way the pet shot is, but it’s further than I want to go. There is a Wal-Mart; I wander in for the heck of it. My phone rings. The car is ready.’

I get back. The proprietor has more bad news: The right ball joint is shot and ready to fall apart. He warns me that the car is not safe to drive at freeway speeds. Ka-ching! That brings the total bill up to $800. I decide I am going to have to curtail the fish purchases I had planned to make today.

Two more hours; I find out which way the fish shop is, walk that way, and look. It’s a long walk which is good for killing some time. I’d like to add some algae eaters and perhaps some neons to the tank, thought the neons are a touch out of place with my Southeast Asia fish already in the tank. And maybe a couple of mystery snails for added algae control. But I just spent all my money on the car.

I walk back. The car is ready. Clouds are gathering over the Sangre de Cristo, where one of my hiking alternatives was. I decide to take the other, to the Cerros del Rio.

The Cerros del Rio is a plateau straddling the Rio Grande River southeast of White Rock. It is surfaced with basalt that was erupted around 3 million years ago, and studded with basalt to dacite cinder cones somewhat younger in age. The basalt is typical of continental rifting, with an elevated content of the alkali metals, sodium and potassium. Which is unsurprising, given that the plateau is in the middle of the Rio Grande Rift, the great crack in the Earth’s crust stretching from central Colorad to El Paso, which opened about 30 million years ago and continue to slowly open to day.\

I take the Veterans Memorial Highway and find my turnoff. It has double roundabouts. My road log is apparently slightly out of date and the roundabouts are very recent construction; it takes some time to find my bearings, but then I head southwest on the frontage road, turn right on Caja del Rio Road, then turn left on County Road 62. The road goes up the lowest part of the escarpment ringing the Cerros del Rio, becoming Forest Road 42, then turns northwest. Two cattle guards and a skip and a jump later, I reach the T intersection described in my hiking guide.

It looks like a long hike to the Twin Hills, my destination for the day, and I only have a little over two hours. The hiking guide does not recommend taking the T road, but I decide to take a crack at it. It’s not too bad, but I finally lose my nerve here, where the road descends steeply through a very rocky patch. 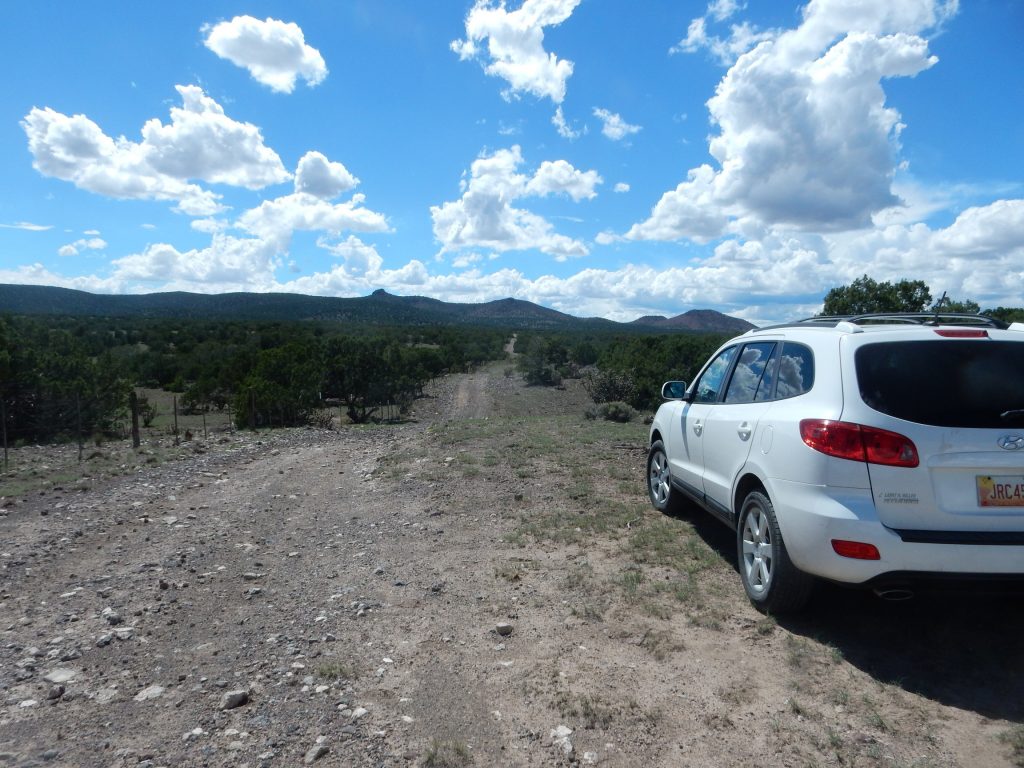 The Twin Peaks are on the skyline just above my car hood. My first target is actually the volcanic plug just left of center.

(And, after hiking down the road, I conclude that I could probably drive a considerable distance further with reasonable risk. Well, this is a reconnaissance.)

I pack up, grease myself with polyphenols, finish my lunch, and turn on my Spot satellite locator in my pack. And off I go.

The hike guide says to look for a smaller road headed south. Here? 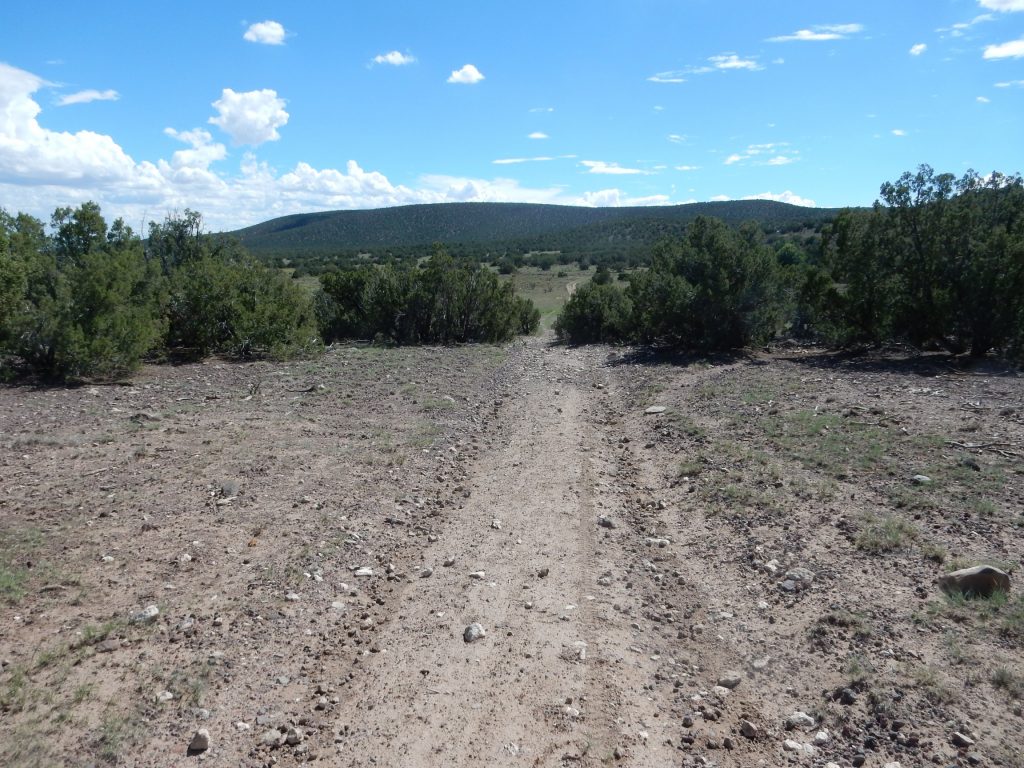 Note: Not actually the right road.

The road seems clear enough, and the view from here is pretty.

At far left is the southernmost Sangre de Cristo on the skyline. Straight ahead are hills underlain by the andesite of Cerrita Portillo, erupted from a vent to the west. Andesite is more viscous than basalt, because of its higher silica content; it tends to form rather thick flows on top of the thinner flows of basalt that cover most of the Cerros del Rio.

The nearer hills at center right are a local vent for the basalt of Canada Ancha. To the right is a ridge of basaltic andesite of Twin Hills featuring the two plugs.

Something about this does not feel right. The road passes an earthen dam: 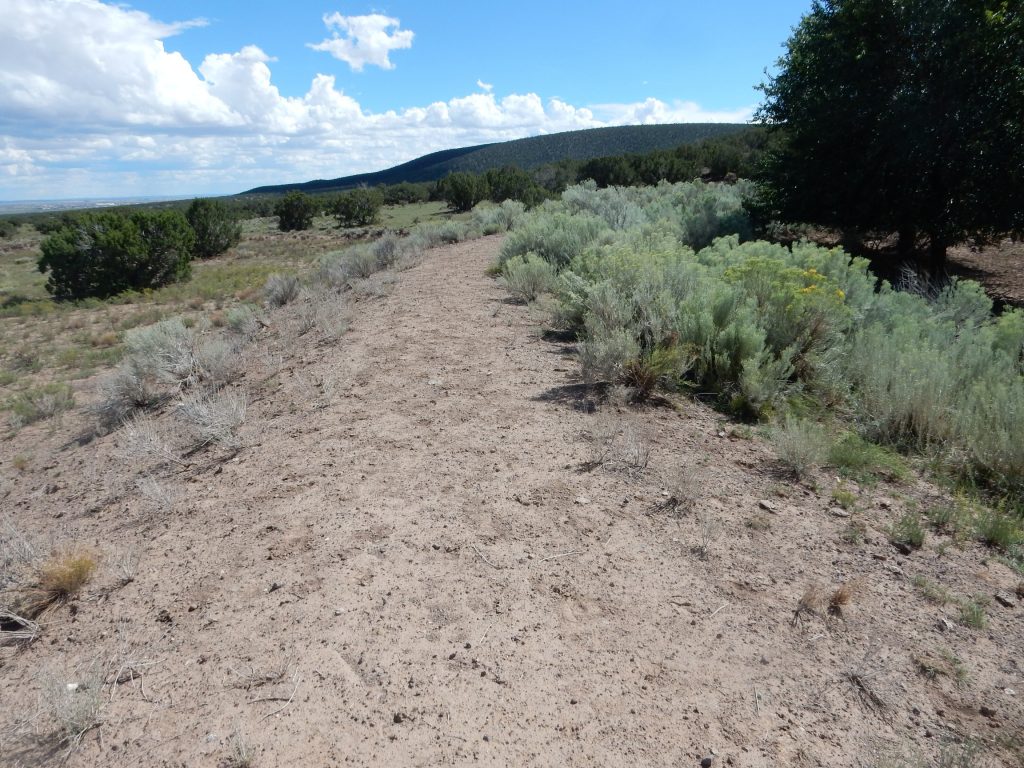 and I see that the road east of the dam turns abruptly southeast. Also, I feel like I’m too far south. I bushwack northwest, knowing that sooner or later I’ll hit the main gravel road. Which I do.

The view is good.

I’m looking for a road branching to the south that runs up between the two plugs. Is this it? 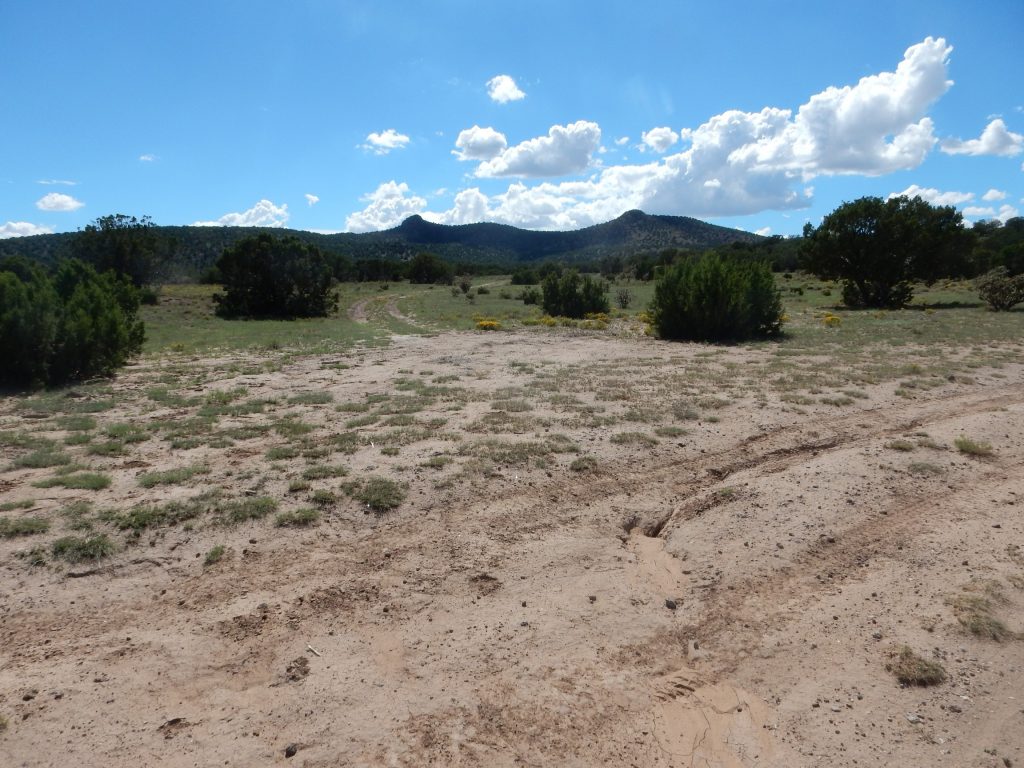 Also not actually the right road.

It seems to be headed the right way, so off I go. Alas, the road kind of fades away after a few hundred feet. But I come to my first outcropping. 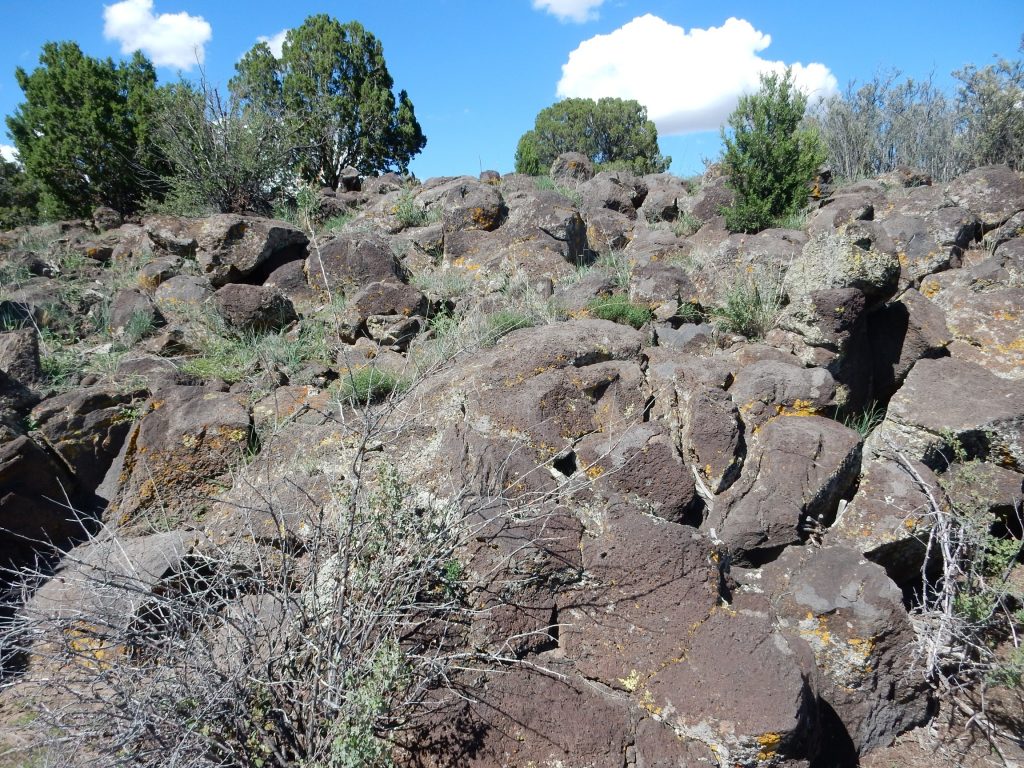 As near as I can tell from the map, this is basaltic andesite of the Twin Hills.

Past here is neither road nor trail, but I seem to be in a broad valley headed right up between the plugs — just as my trail guide describes. Everything is here except the actual road. Well, that’s just a means to an end, right? 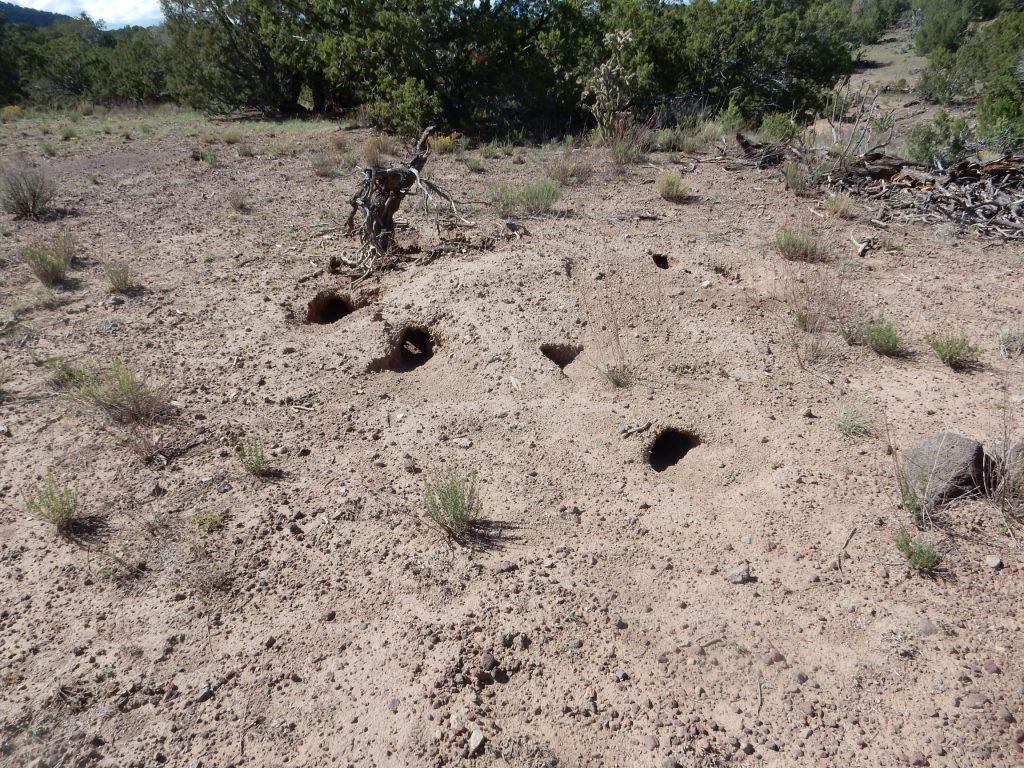 Right on schedule, as described in my hiking guide, I see a smaller plug to the south, and bend course that way. 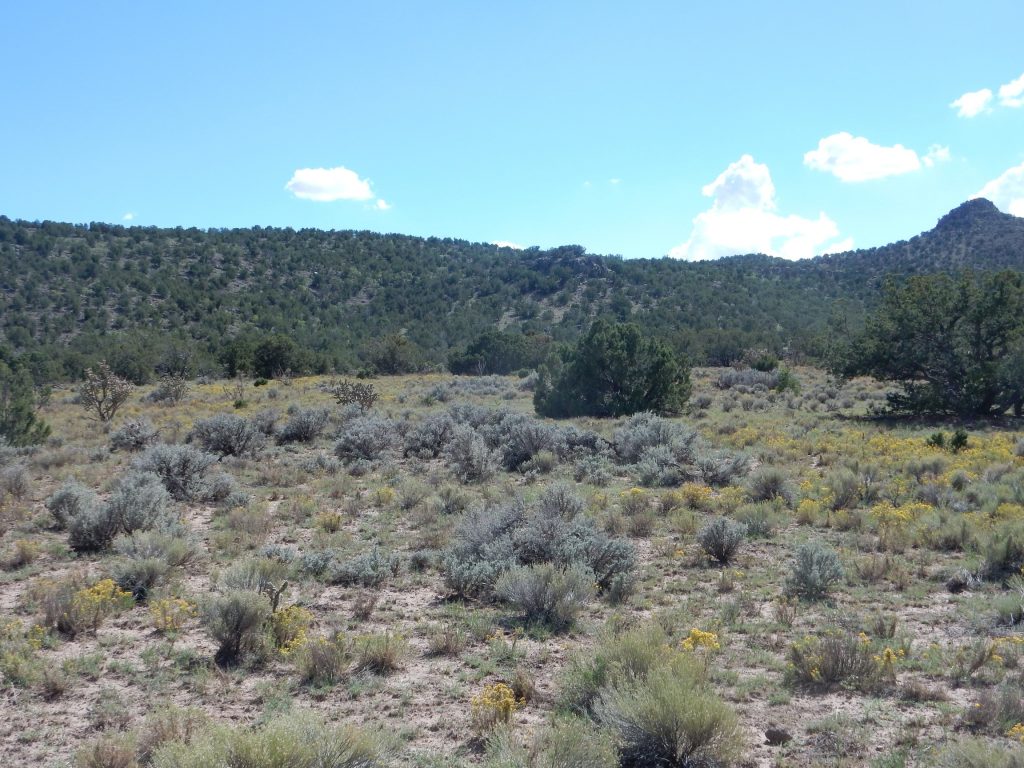 This is a plug in the andesite of Cerrita Portillo. I clamber towards the top: 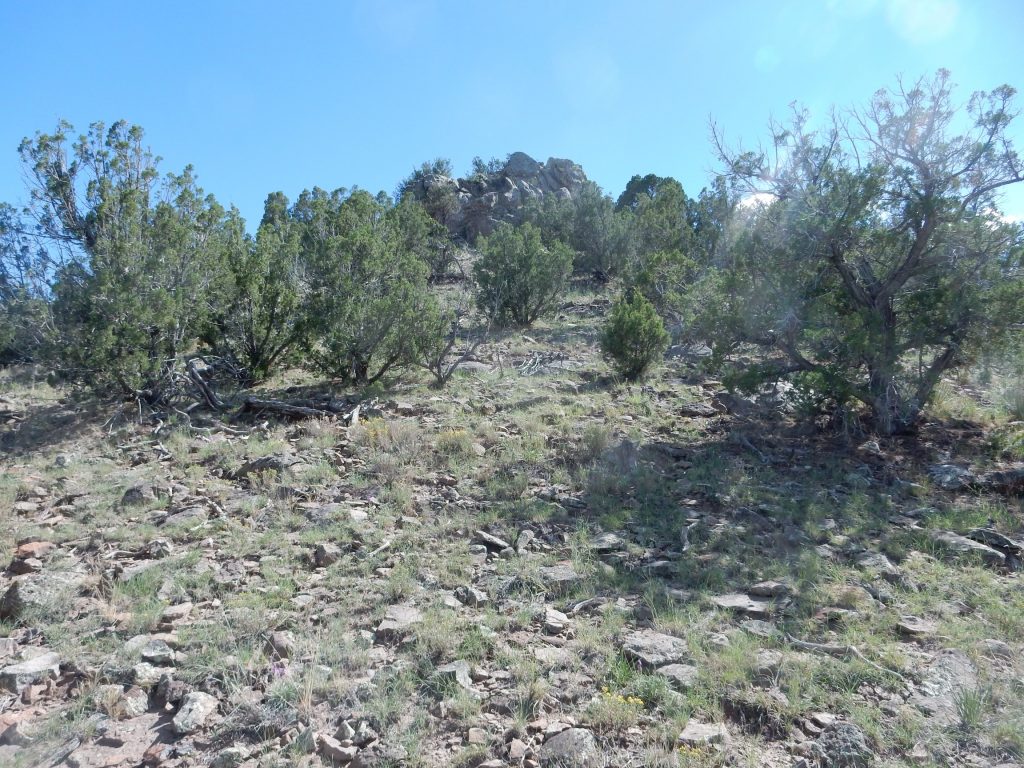 The rock is is a rather light gray for basalt. (Because it’s andesite; I do not know this at the time.) There is flow banding. 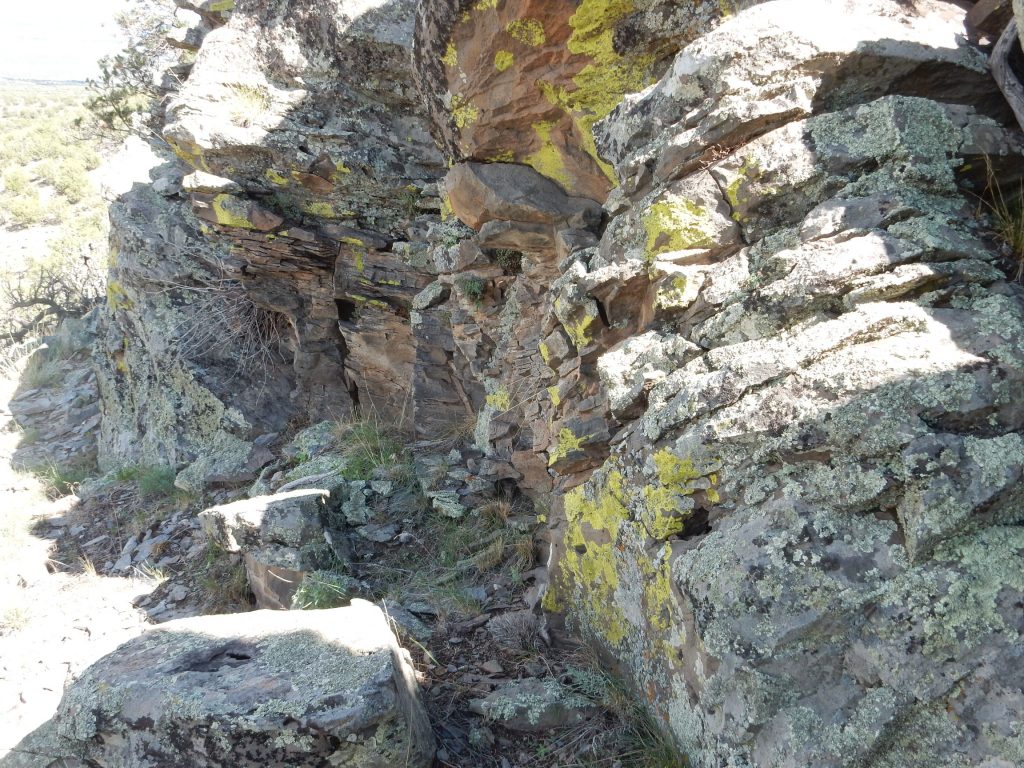 The view from atop the knoll:

At far left, the north plug and the Twin Hills. To their right, on the skyline, the Jemez Mountains. (As with almost all images at this site, you may click to enlarge.) At center left in the middle distance, Ortiz Mountain and the surrounding andesite flows, age 2.32 million years. Then the Sangre de Cristo.

The andesite atop this glow has agglutinated texture. 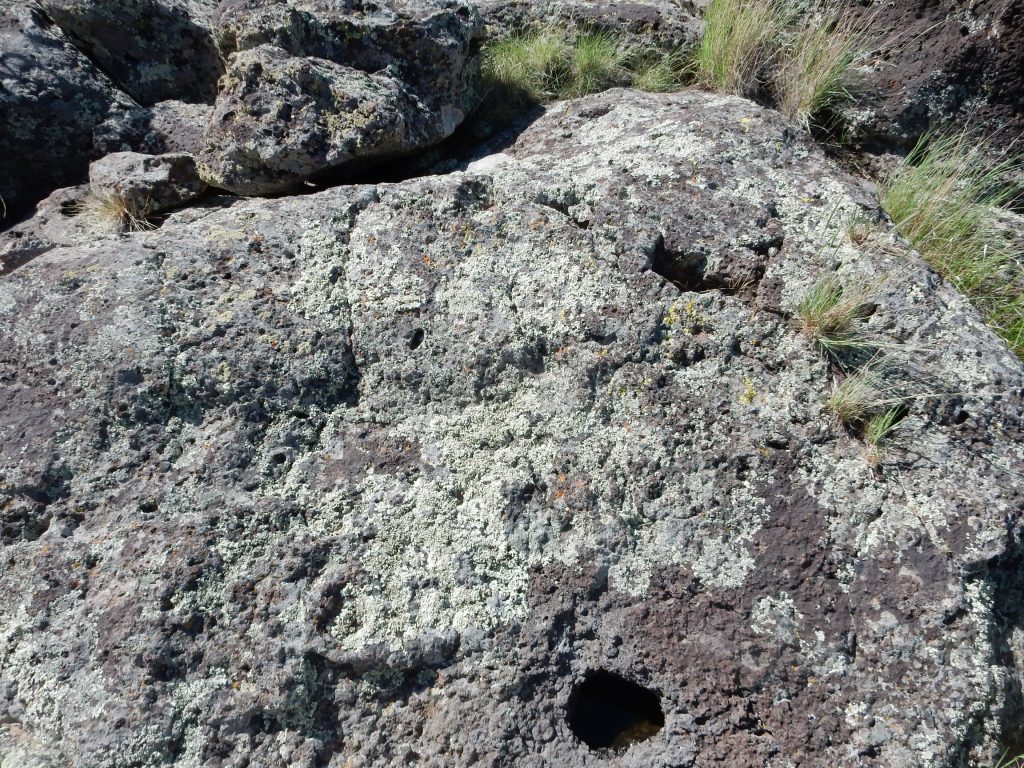 This is typical of the lava near a vent.

Another view of the Twin Hills complex.

I hear what sounds almost like someone calling. I look. There are cattle on the ridge above me. When they notice me, they break into a gallop (do cattle gallop?) back up the ridge.

I am out of time. I had hoped to reach the plugs but that would take another hour I don’t have.

From this lookout point I see a very clear road out in the valley. Well. I make in that direction. Looking back at the smaller plug: 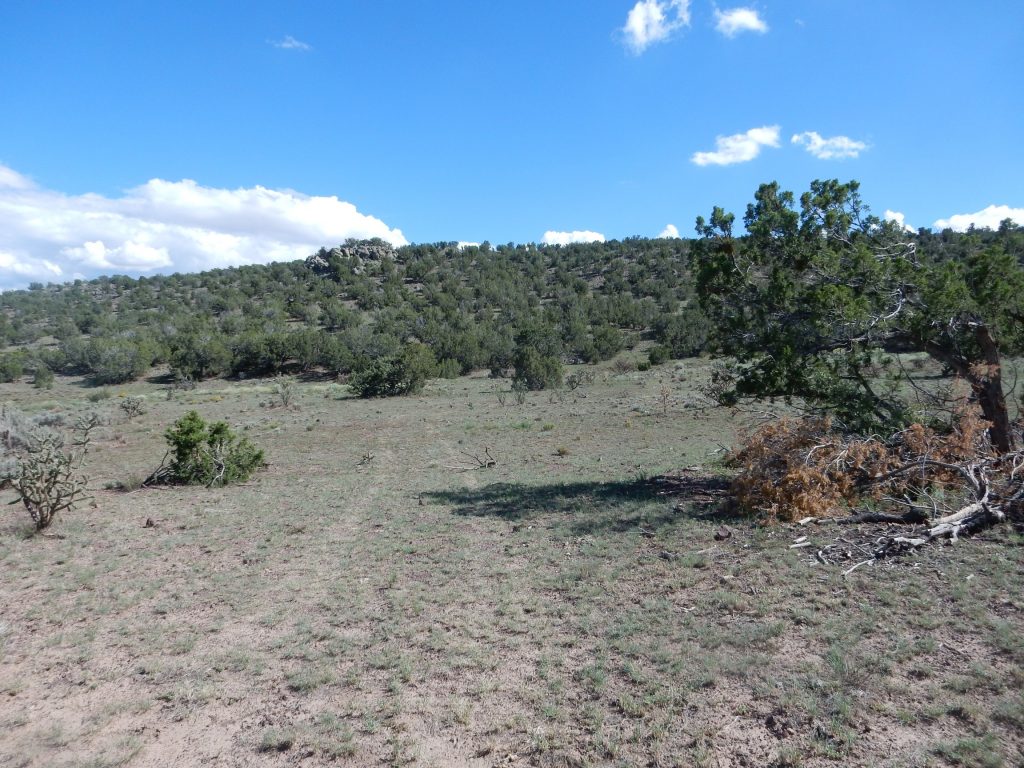 The road is very definite. 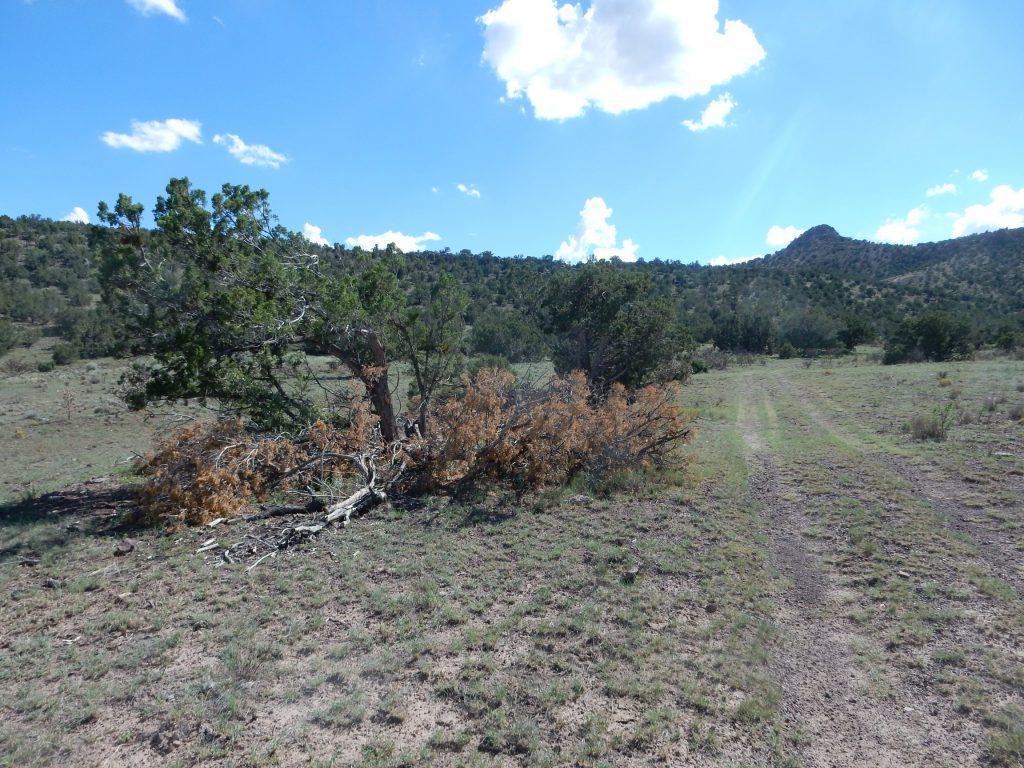 I turned south too soon. Here is where I should have turned. 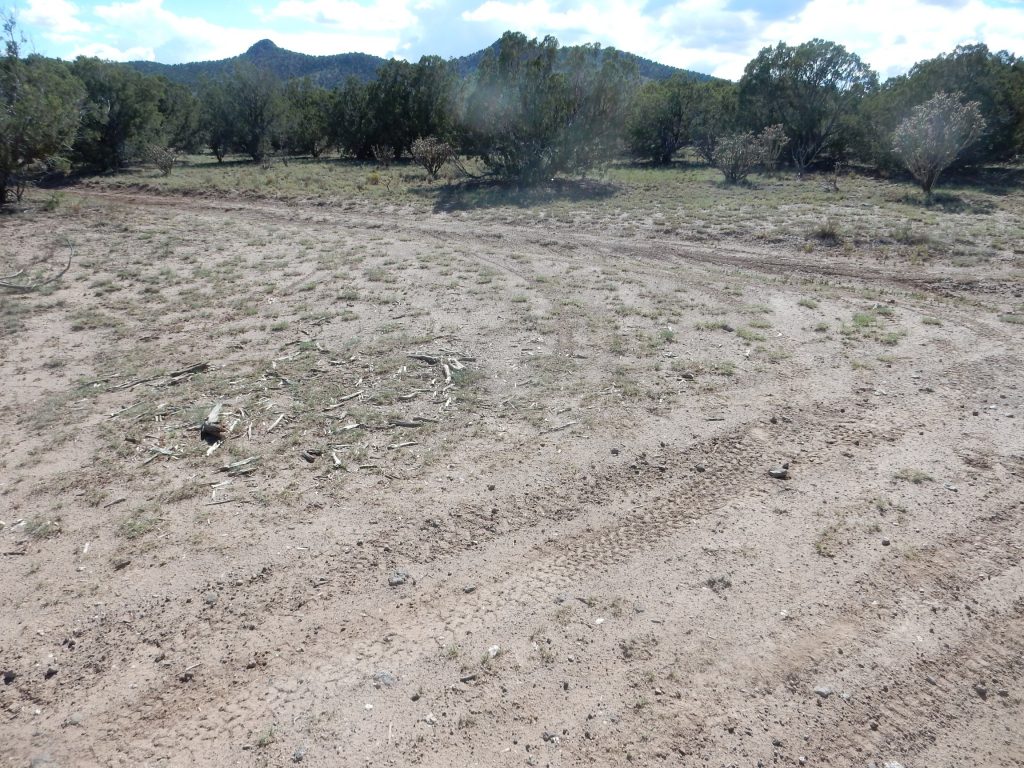 One last oddity on the way out. 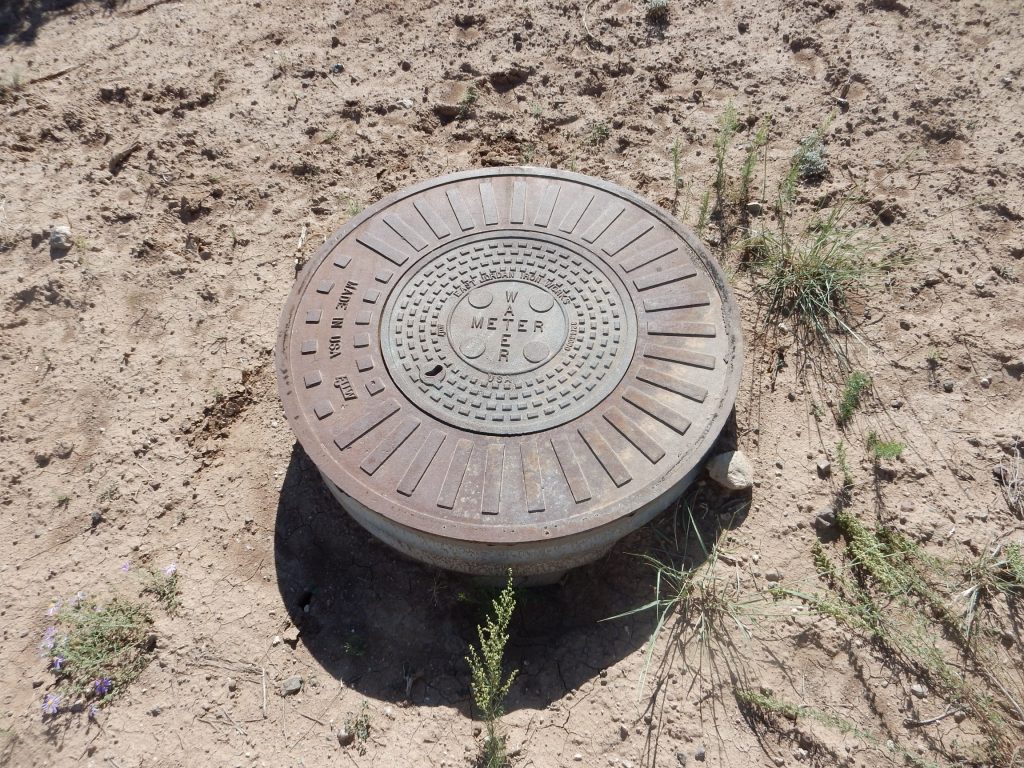 This is a mighty strange place for a manhole. I find myself wondering if this is a seismic station or something of that sort.

Back to the car and to a church service. Then to the fish store for some aquarium plants and a couple of snails; I was planning on more but Ka-ching!