I had business in Albuquerque Friday, but was finished by noon and had brought my hiking gear. After dining at the Indian buffet on Paseo del Norte, I proceeded to Tijeras Canyon, planning to visit a lamprophyre dike along the highway I had read about. I caught a glimpse of it as I headed east on the interstate and pulled out at the next exit, which put me on the old Highway 66. This crossed over to the north side of the interstate and I drove a little further, curious whether there were any more lamprophyre dikes I could examine without having to walk along the interstate. No such luck; they’e not that common.

However, I just had to stop at a road cut in the granite. 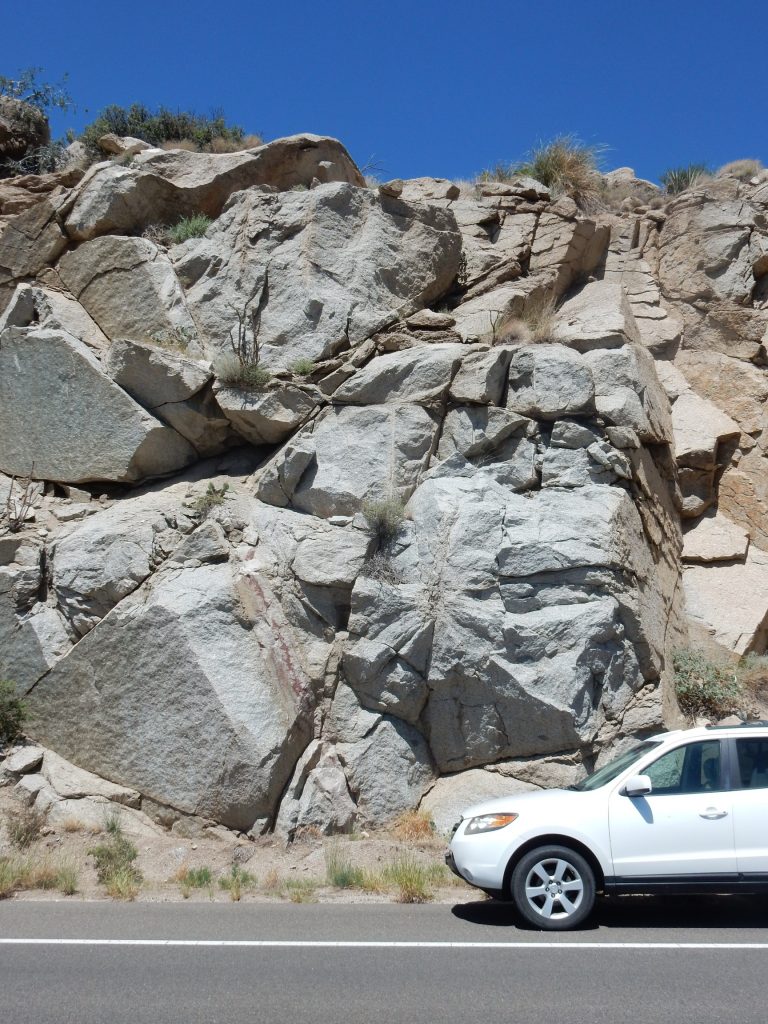 This is the Sandia Granite. It’s actually a monzogranite, with better than 15% quartz content and a bit more plagioclase than alkali feldspar. True granites have predominantly alkali feldspar. This oucrop has been radiometrically dated at 1.455 billion years old, coinciding with a time when much of what is now the Southwest experience a “heating event” in which large quantities of molten rock intruded the crust to cool into various granite-like rocks.

I’ve visited this outcrop before. It’s just too pretty a rock not to look at again.

These may be the actual sampling points used in the radiometric study. 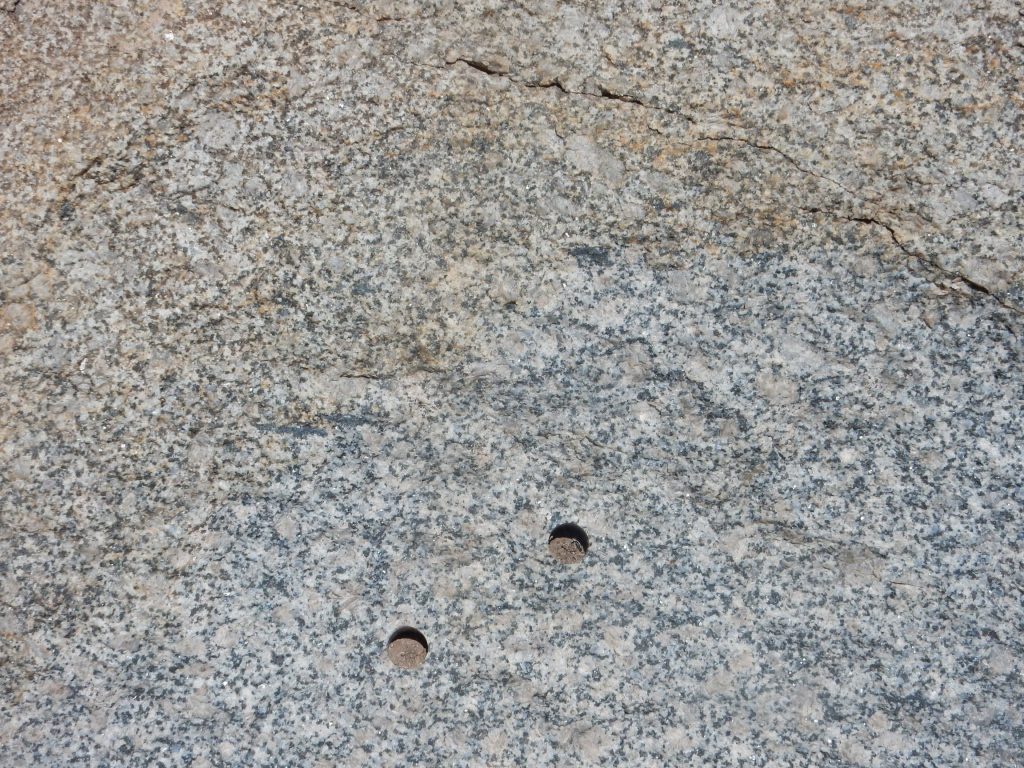 There are several such core marks on this outcropping, indicating a fair amount of geological study of this formation. Such cores can reveal three important things about the rock.

First, and most obvious, the cores can be analyzed for their composition. Looking at the rock tells us it contains feldspar, quartz, and mafic minerals; closer examination with a loupe reveals that the mafic minerals (black stuff) is flaky. This identifies it as biotite, a form of mica rich in iron. That, in turn suggests a fairly high aluminum content in this granite; otherwise I’d expect to see hornblende instead of biotite, hornblende being a less aluminum-rich mineral. So we know the rock is silica-rich (because it has quartz) with a fair amount of aluminum (because it has biotite). But we can’t do much better than that without laboratory analysis, which allows us to classify this as a monzogranite and perhaps analyze its trace elements to say something about its origins.

The second reason for taking a core is to perform radiometric dating. The rock contains traces of a mineral called zircon, and the lead to uranium ratio in this mineral gives us the age of 1.455 billion years. Although the dark stuff is mostly biotite, there is some hornblende, and its ratio of trapped argon to potassium yields an age of 1.422 billion years, not too far off from the U-Pb age.

The third reason for taking a core is to measure remanent magnetization. Iron minerals such as biotite and hornblende contain unpaired electrons. Electrons are perpetually spinning, a consequence of the weird laws of quantum physics that govern subatomic particles, and any spinning charge generates a small magnetic field. The electric charge of electrons is almost always canceled by nearby protons, and, in most materials, electrons with opposite spin are paired so their magnetic field is canceled as well. However, iron and a few other materials don’t quite match up the spins of their electrons, and at high temperature, the spins of the electrons in iron minerals will tend to line up with the earth’s magnetic field. When the mineral cools, the alignment is “frozen” and can persist for enormously long times. This is called remanent magnetization, and it gives us clues to the direction of the earth’s magnetic field when the rock formed.

Geologists were apparently also interested in mafic inclusions in the granite. 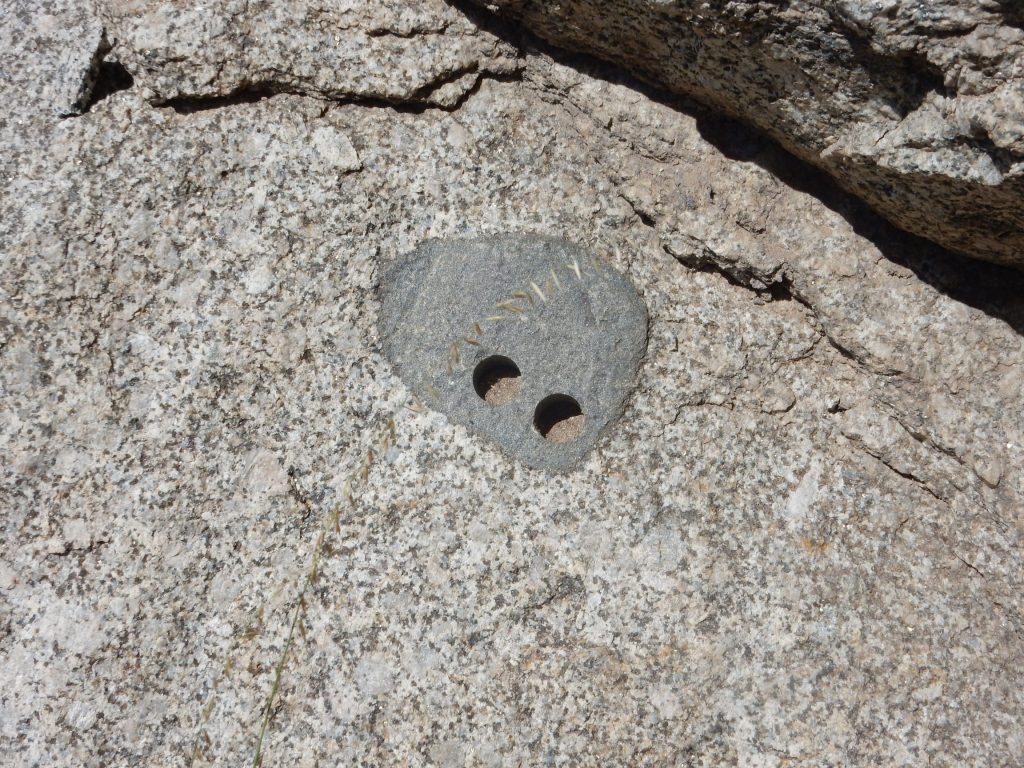 These are patches within the granite of much darker, iron-rich rock. Some are thought to be blobs of silica-poor, iron-rich magma that got mixed into the silica-rich granite magma, but did not mingle, just as oil droplets will not mingle with water. Others appear to be xenoliths, bits of country rock (solid rock surrounding the magma body) that broke off and were engulfed by the magma without fully melting. Some of the mafic inclusions are quite large. 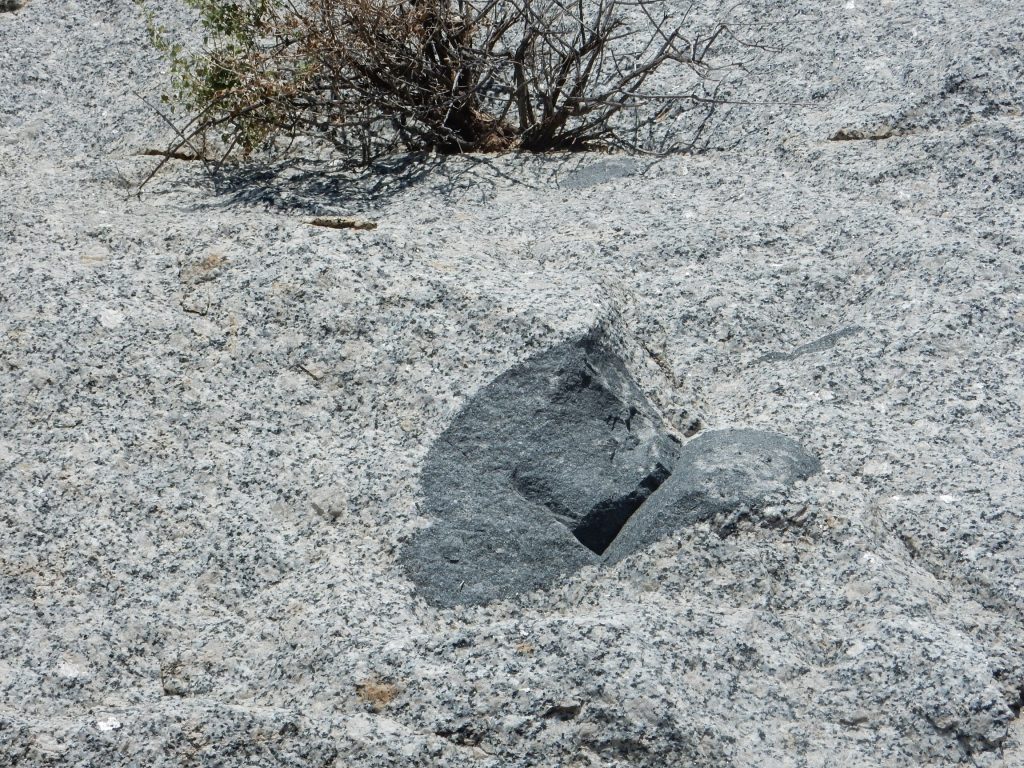 Dating the samples from the inclusion may help determine if it is a commingled magma or a xenolith; if the age is significantly older than the surrounding granite, the inclusion must be a xenolith.

I drive west to the on ramp to the interstate, find a safe place to park, and start down the side of the road. There are more outcrops of granite here, some of which have crumbled into grus. 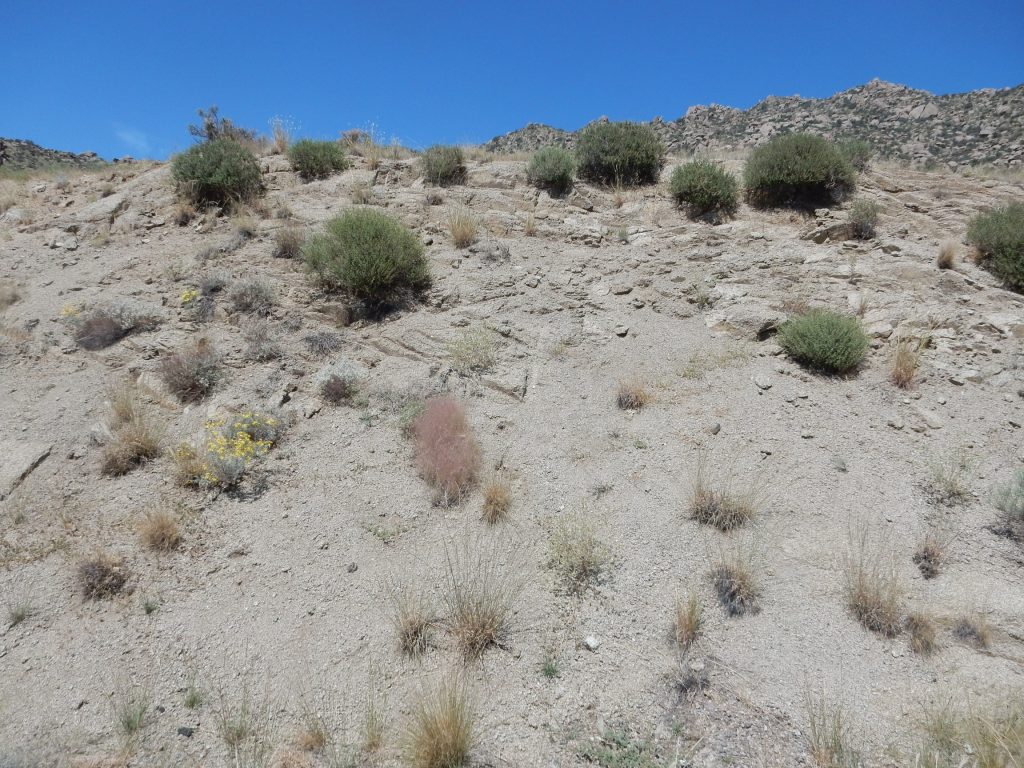 Grus is composed of coarse, angular fragments of rock, something like extremely coarse sand. Granites have a pronounced tendency to weather to grus. I have a bit of an allergy to it, since breaking my ankle when I got stuck in a patch of the stuff about this time last year.

Yep, the lamprophyre is there. 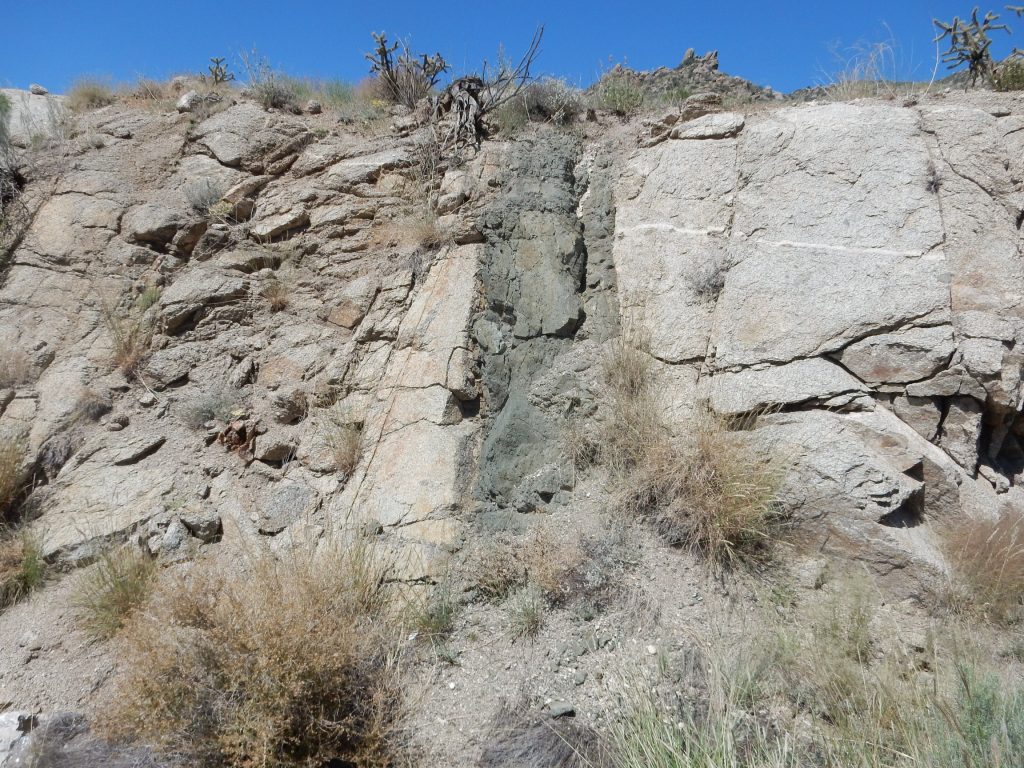 Lamprophyres are igneous rocks that are very low in silica, high in magnesium, and very high in potassium compared with more common igneous rocks. They are usually present in rather small volumes, often as dikes in granite rock like the one here. They are thought to form relatively deep in the mantle, which accounts for the low silica content. It is likely only a small fraction of the source rock melts, which accounts for the high potassium content. Potassium minerals tend to melt first, and traces of potassium in other solid minerals tend to find their way into the melt. Water must be present, since lamprophyres always contain biotite or hornblende, both of which have water in their crystal structure. 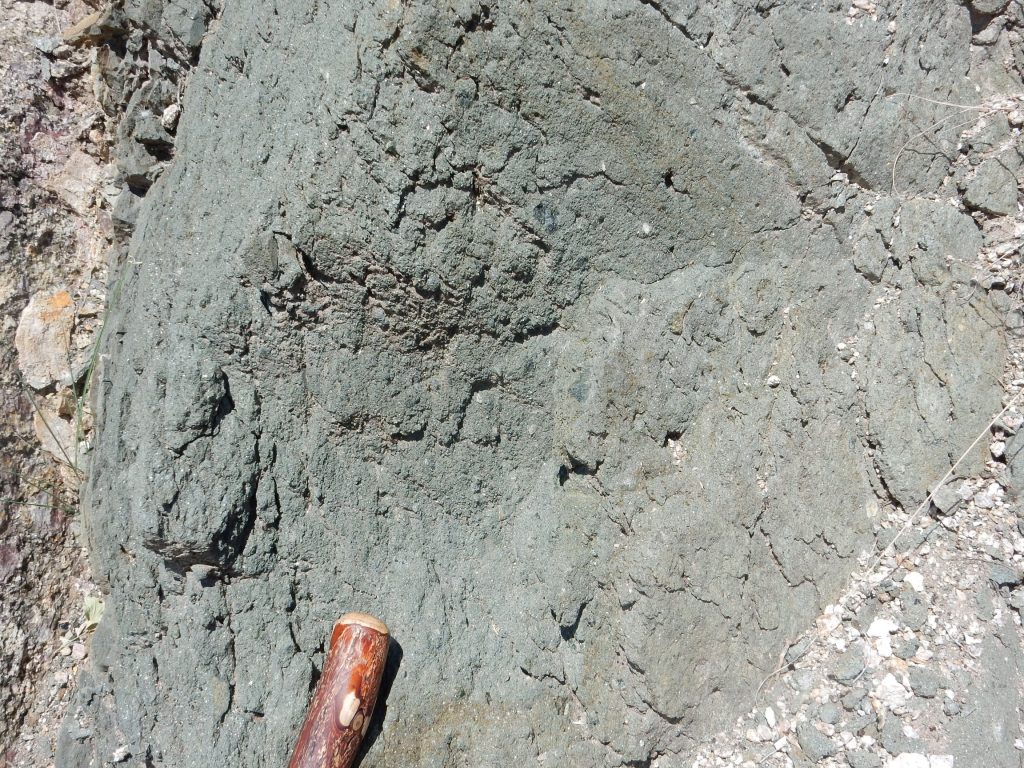 (Click to enlarge.) A striking feature is very large flakes of biotite. 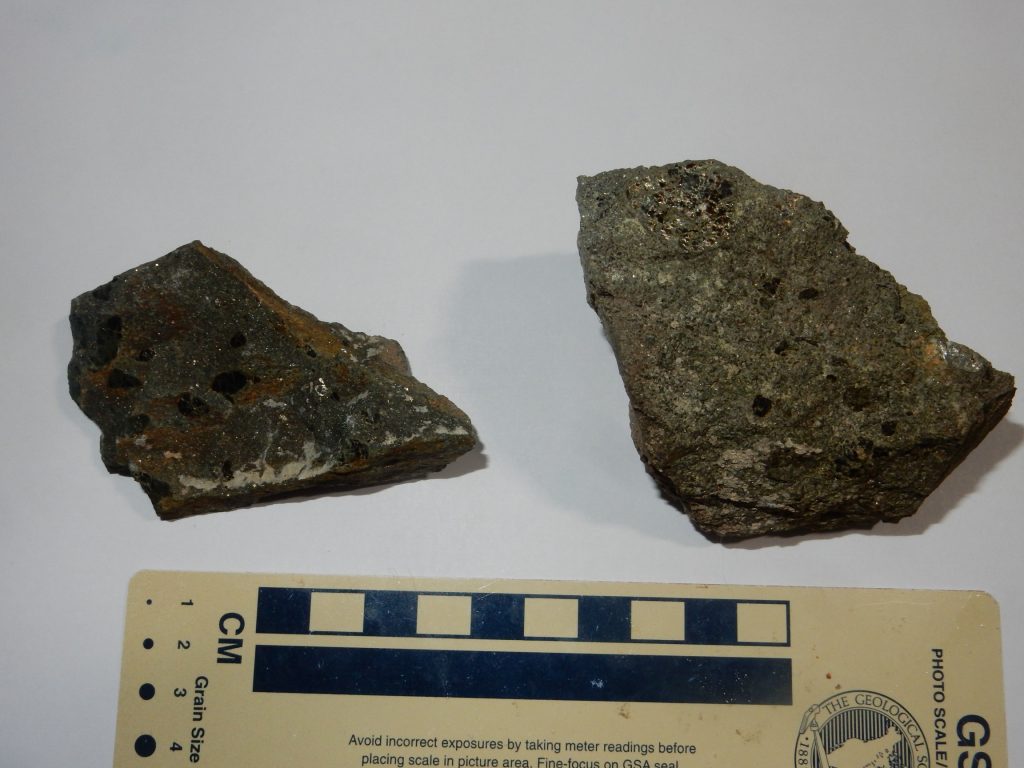 The shiny patch in the sample at right is a biotite flake catching the flash at the right angle. The dark patches elswhere in both specimens are large biotite flakes.

Viewed from a slightly different angle. 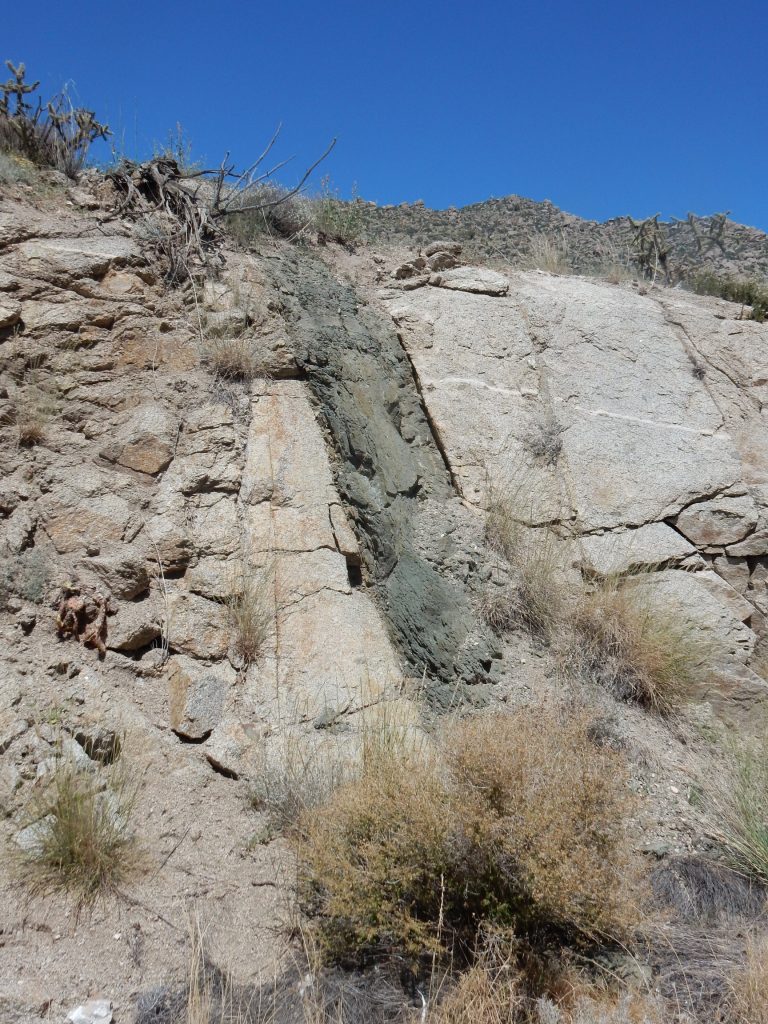 I start back, then reconsider and come back. Are there any mantle xenoliths in the dike? I see some larger dark patches that look more like pyroxene than mica. 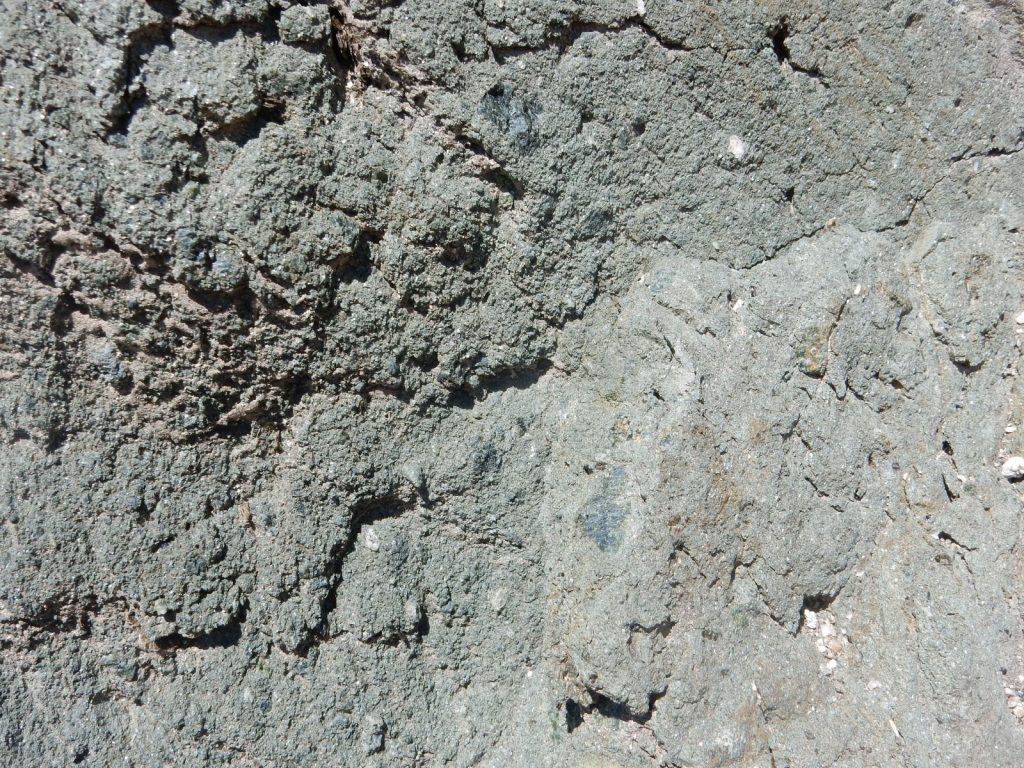 I climb atop the road cut. The dike is buried in grus, and I cannot trace it further north, though the geologic map claims it extends a good half mile up the mountain.

Back to the car and on to the Sandias. I have seen Tecolote Canyon before, but it’s just too pretty not to stop and photograph again. 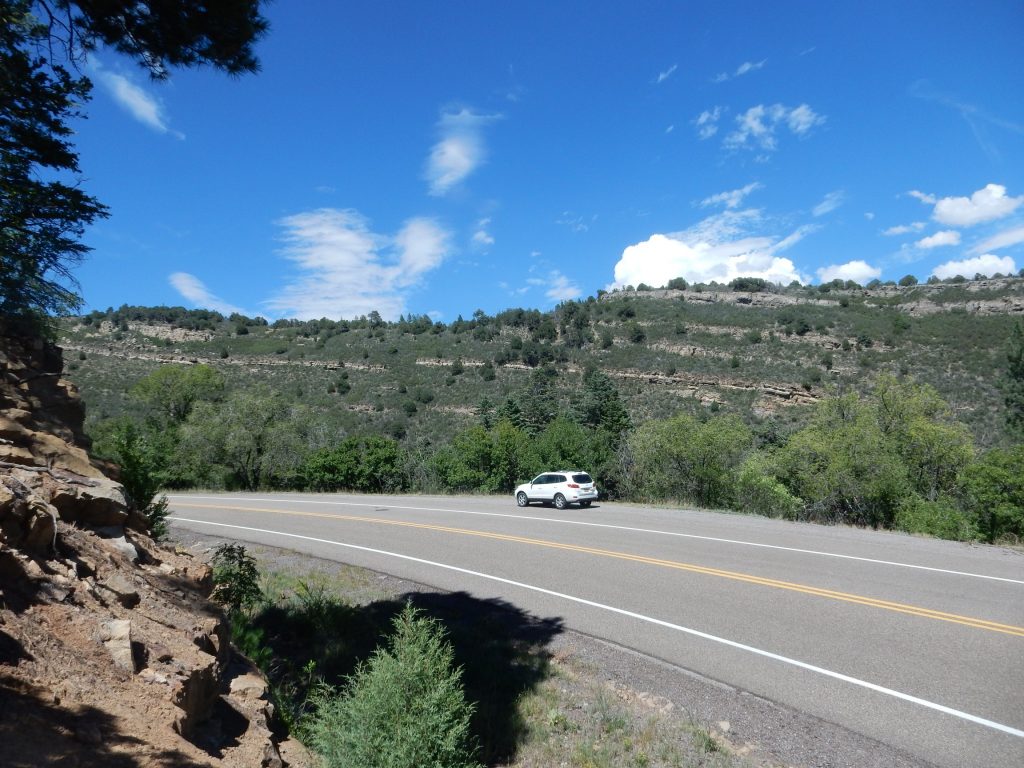 The hillside I’m standing on is underlain by the sandstone base of the Sandia Formation. 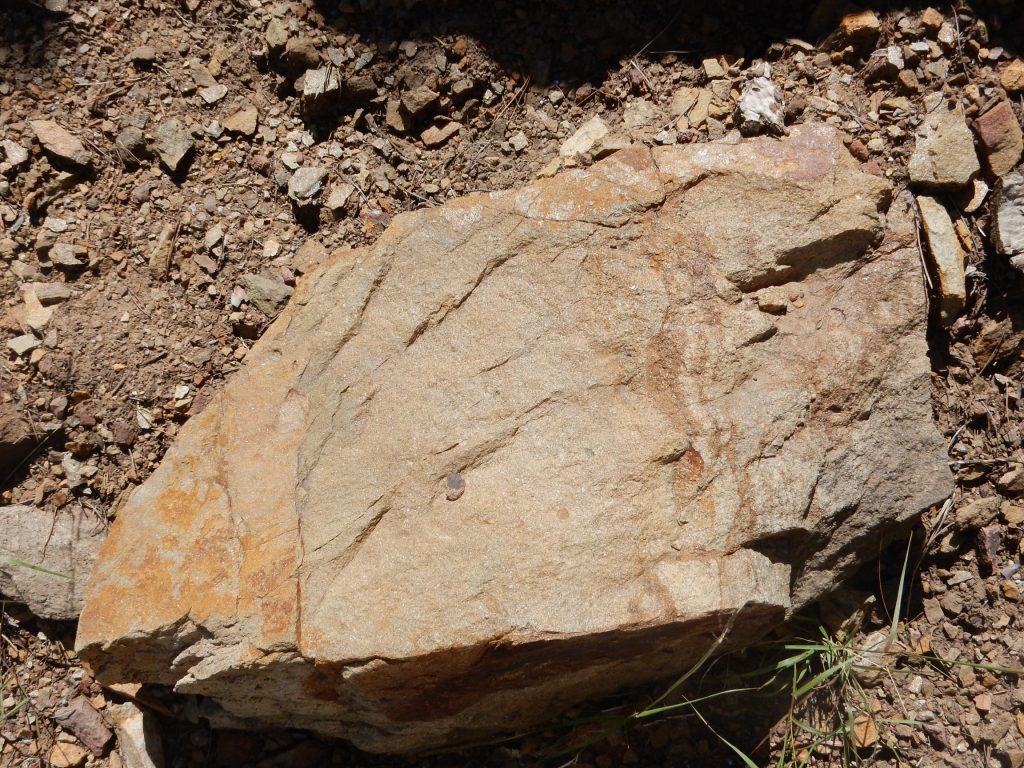 I arrive at my trailhead, the Tree Springs trail. The sign informs me that permits must be displayed on vehicle dashboards. Crep; do I have three bucks in change for the day use permit? I do not. Wait, I have an annual interagency pass; will that do? Yes, it will. But mine expired in July. Or did it? I check; it expires today. I’m good. I load up my pack and fire up my satellite tracker.

As the trail guide I’m using notes, the layout of the first concrete stretch of trail is infelicitous. 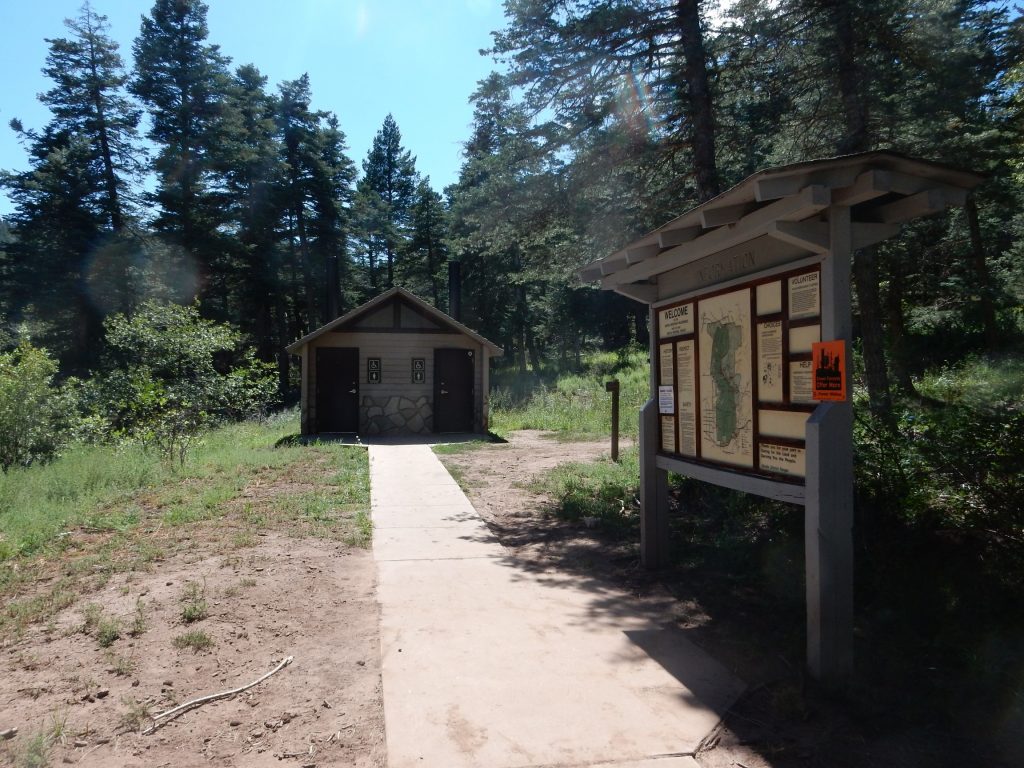 It ends at the outhouses. Well, I need to use those anyway. The real trail begins to the right and climbs rapidly. The entire route is mapped as either Madera Formation or as colluvium (loose rock and soil) over Madera Formation, though I see some sandstone beds that look a lot like Sandia Formation. Like this one: 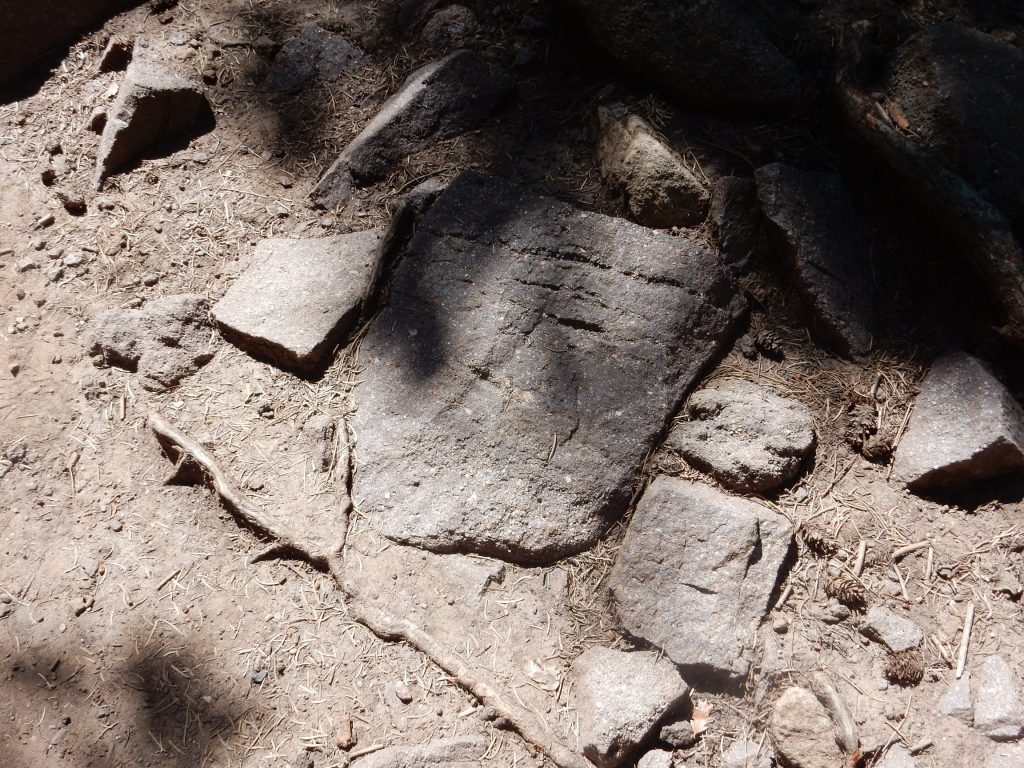 This is definitely limestone. 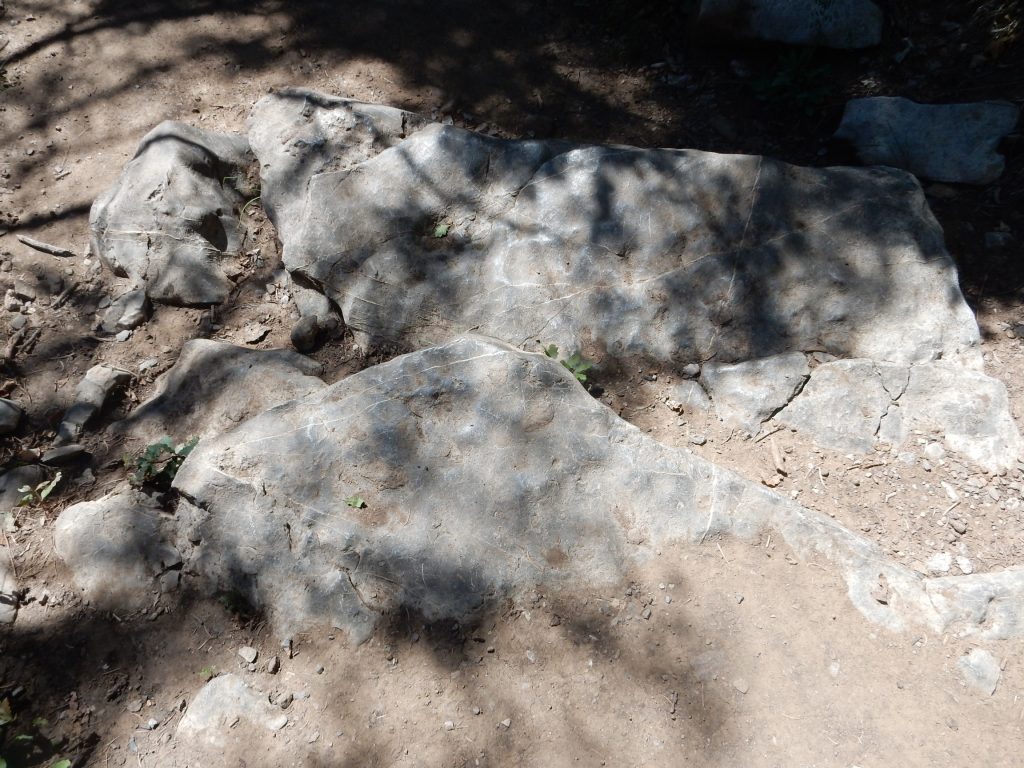 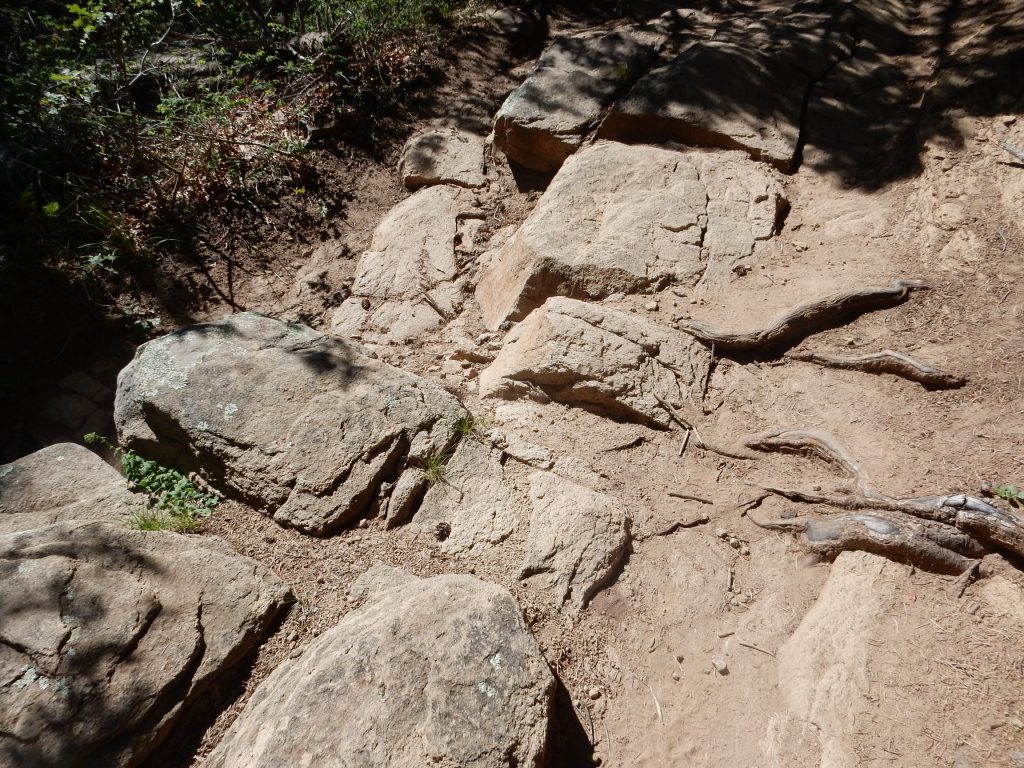 My GPS lock is squirrely in this rugged terrain, but it seems like the sandstone crops out in dips in the trail. I feel like I’m crossing between Madera Formation and Sandia Formation as the trail climbs and dips, but the geologic map insists it’s all Madera Formation. 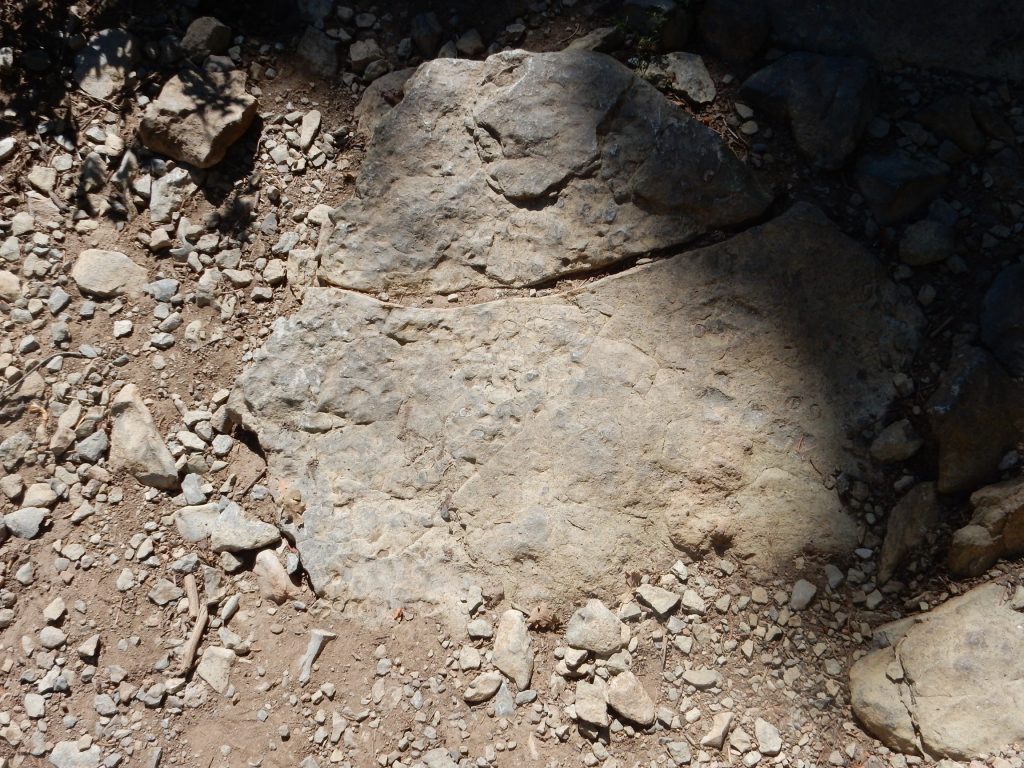 Click to enlarge (as you can do with most photos on this site.) There are shells in cross section, though not terribly well preserved.

The trail is climbing the north rim of upper Tejano Canyon. 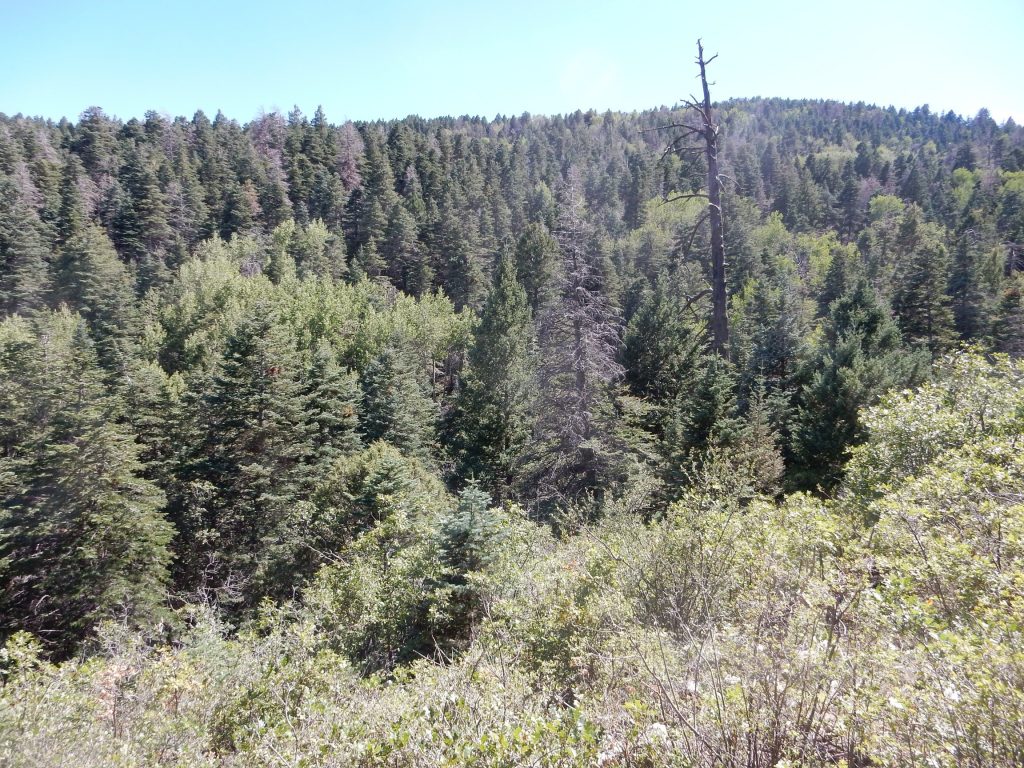 South Mountain through a gap in the trees. 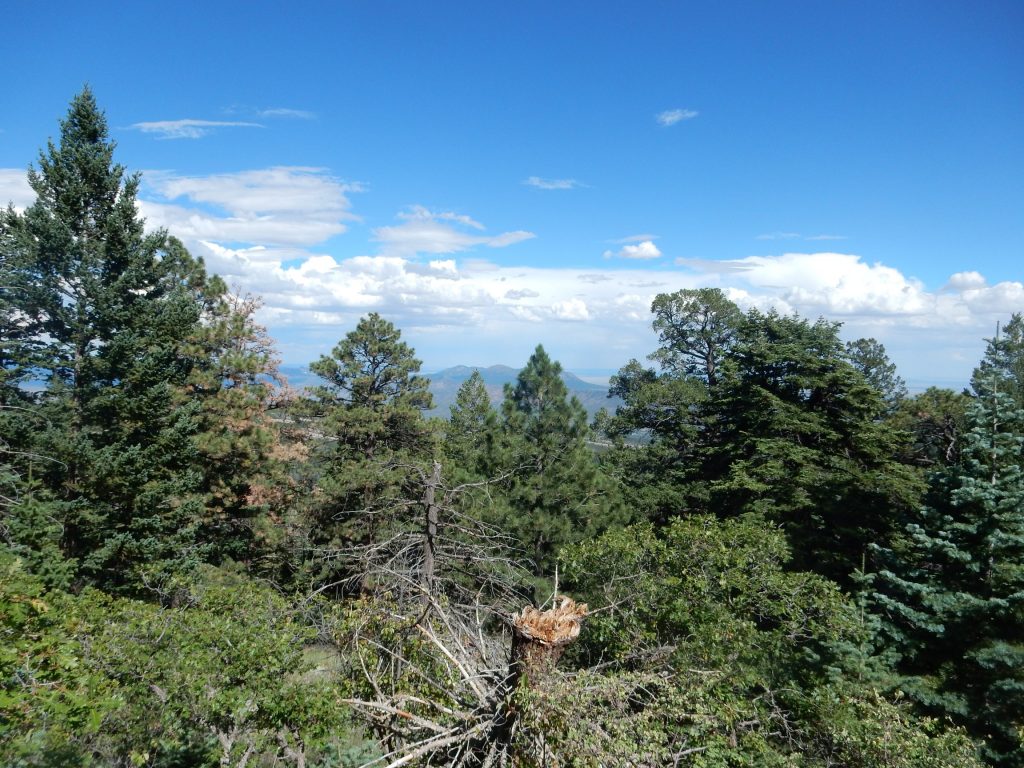 South Mountain is the southernmost peak of the Ortiz Porphyry Belt, a north-south belt of volcanic activity of the Oligocene, 25 million years ago. Most of the exposed rock formed from magma that cooled underground (some magma seems to have made it to the surface, but has largely been eroded away) and a lot of metal-rich fluid was sweated from the cooling magma to form rich ore deposits. 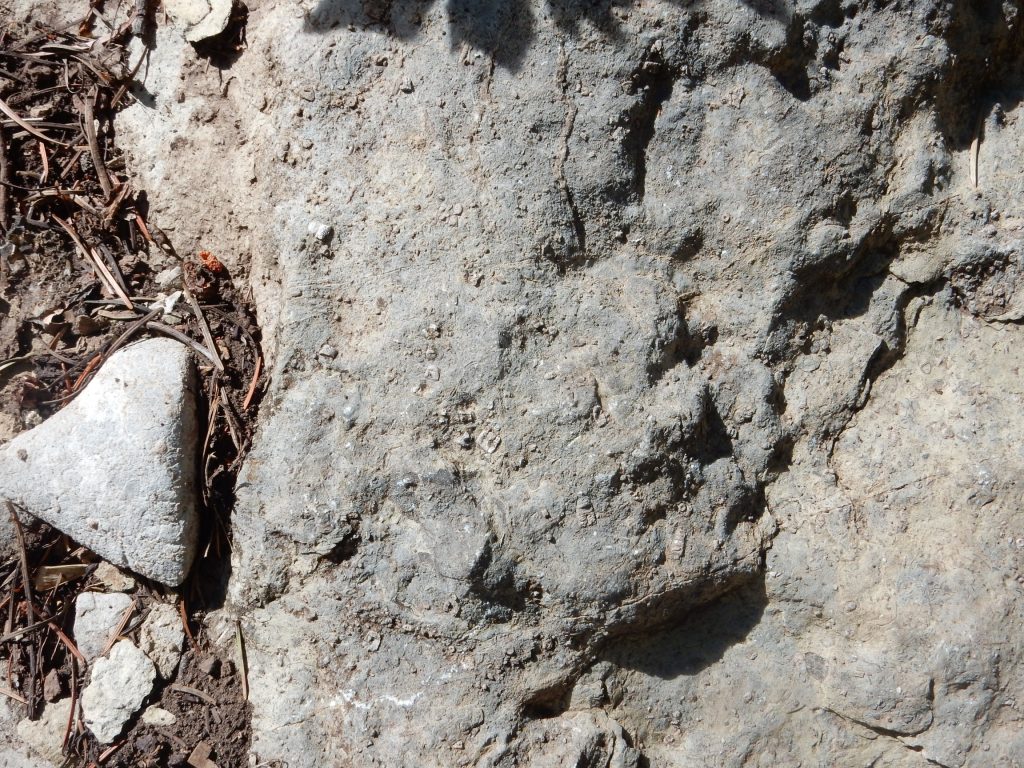 These are very common fossils in Pennsylvanian rock, and I already have better samples at home. Still, it looks like I’m approaching the right area. 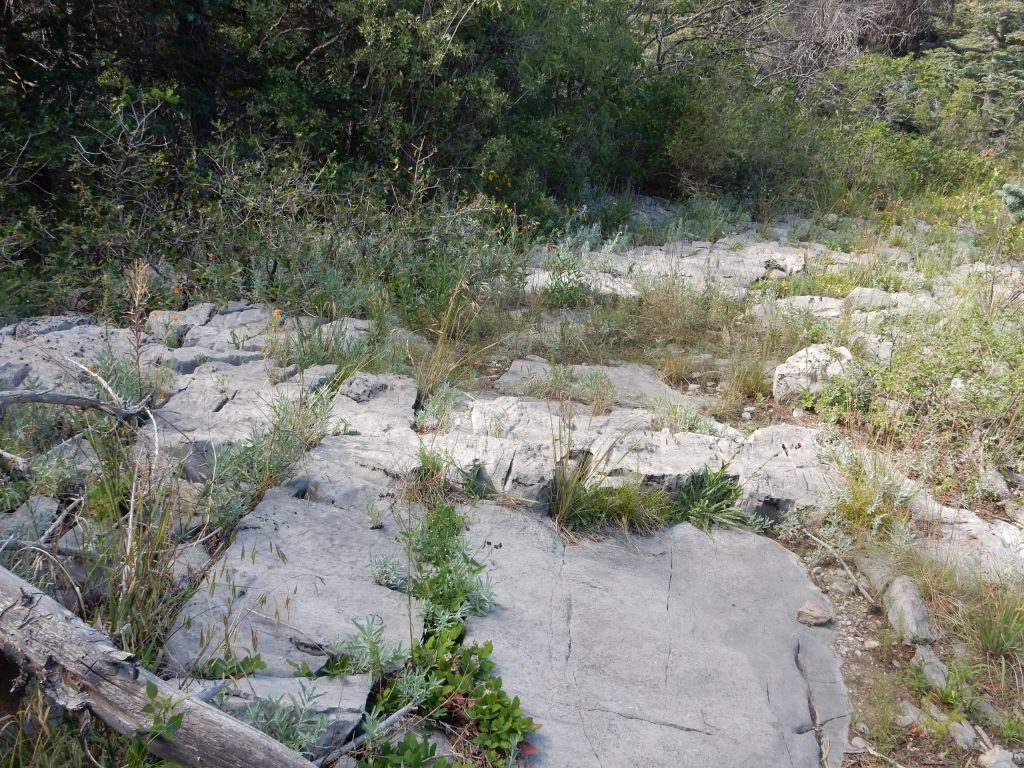 Here the trail does a hairpin turn south, and the surrounding meadows have plentiful exposed limestone. This is where my trail guide says there are gastropod and trilobite fossils.

Which I cannot find. There are these 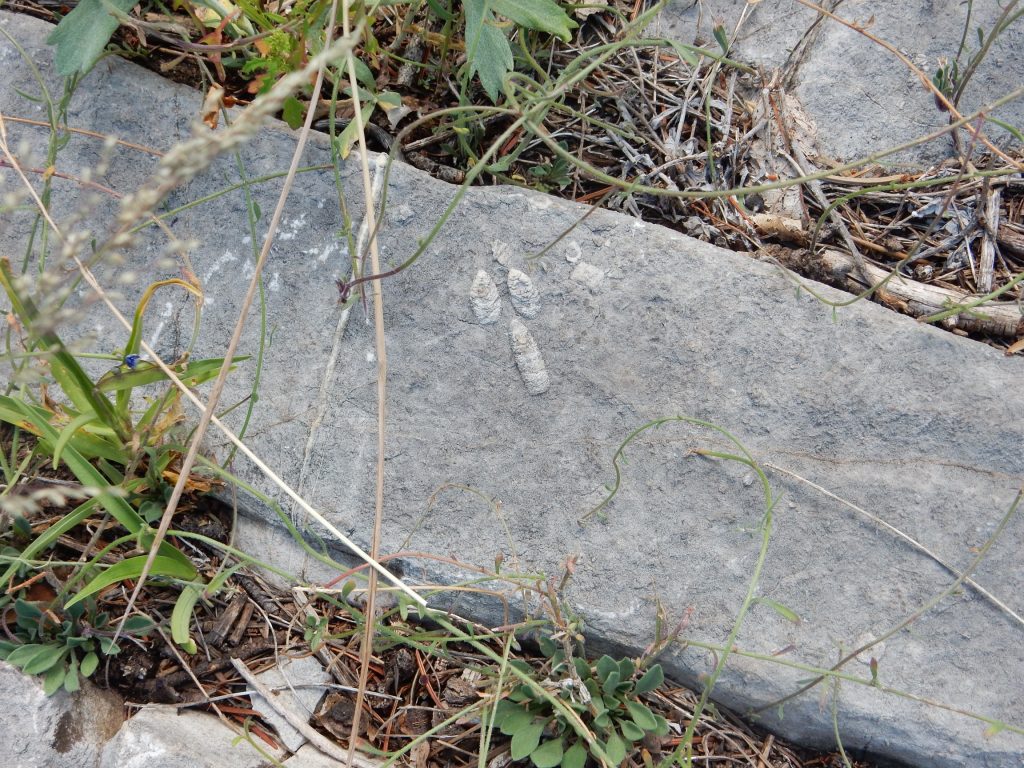 which I can’t identify, and this crinoid stem in long section 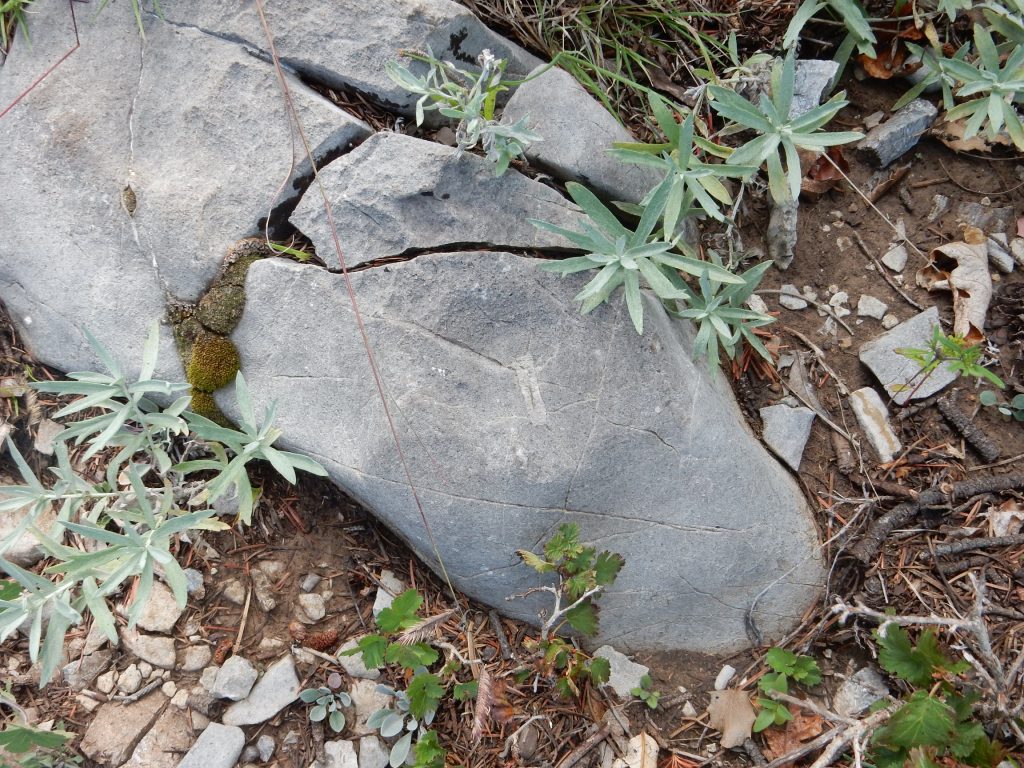 Time is up. I start back, and sure enough 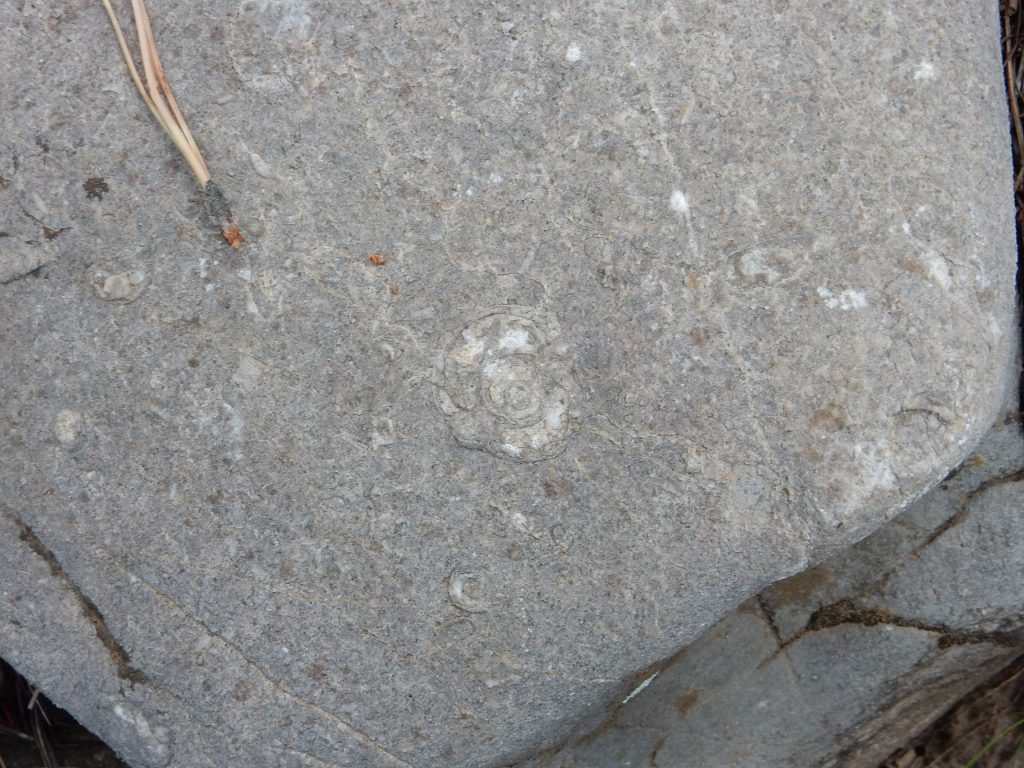 That’s a gastropod; a kind of marine snail. I start keeping my eyes peeled and see more. 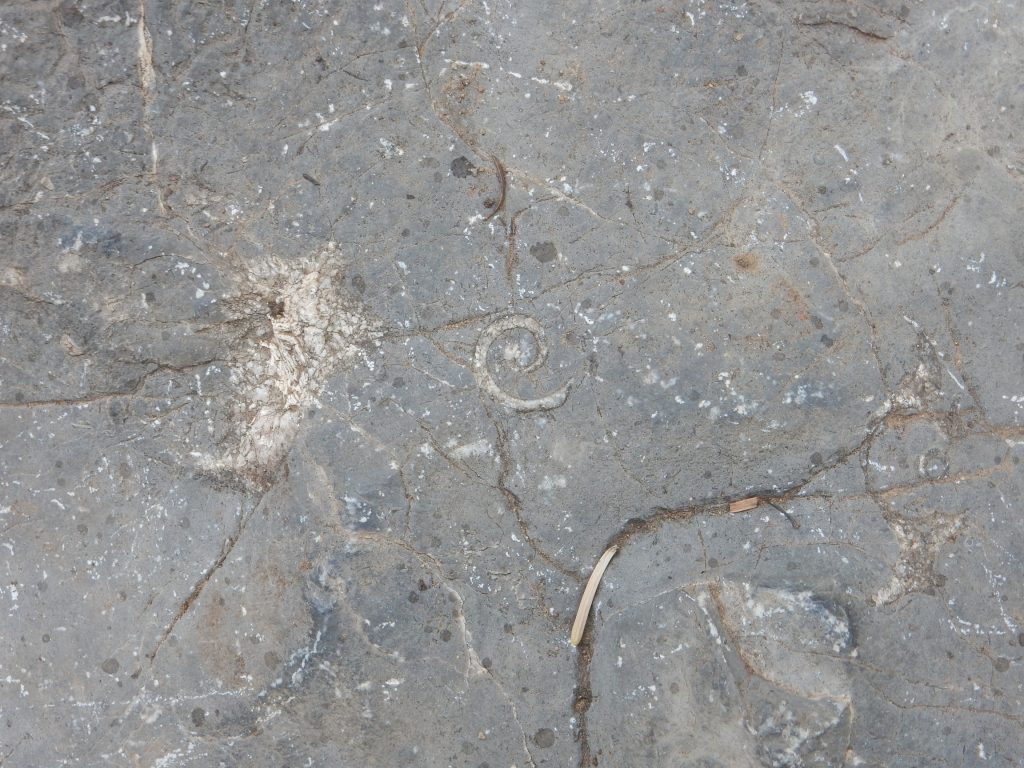 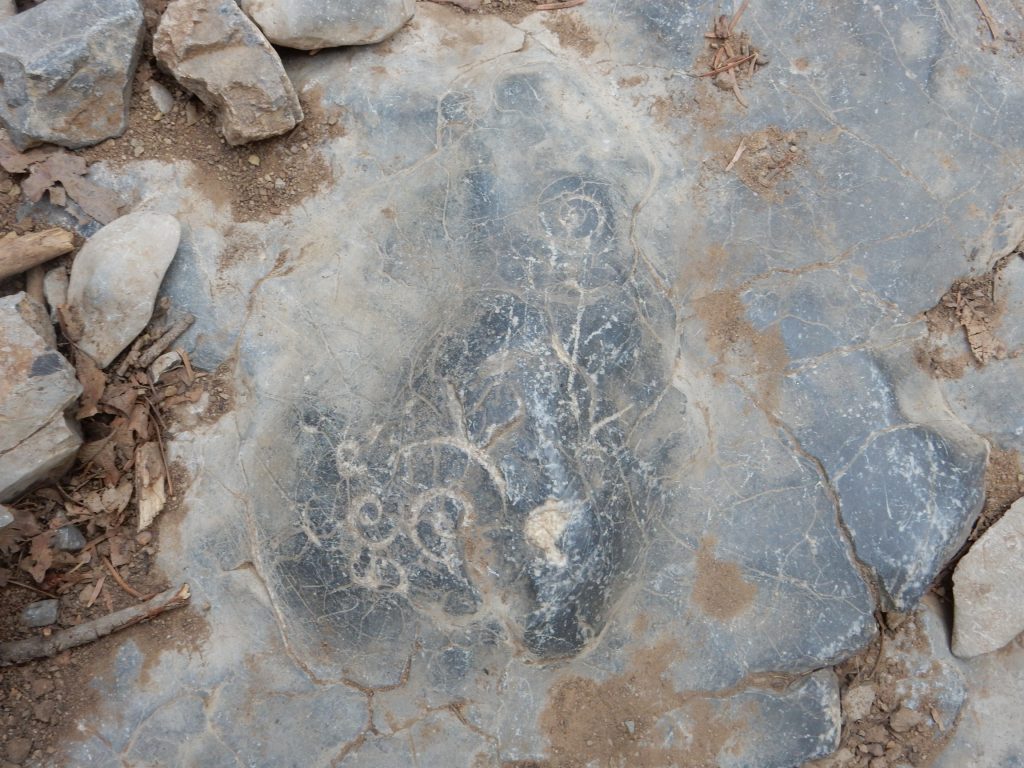 That last nest of gastropod fossils was right in the middle of the trail, polished by countless hikers’ boots.

I notice a thinly bedded section of rock on the way out that is unlike other sandstone in the area. 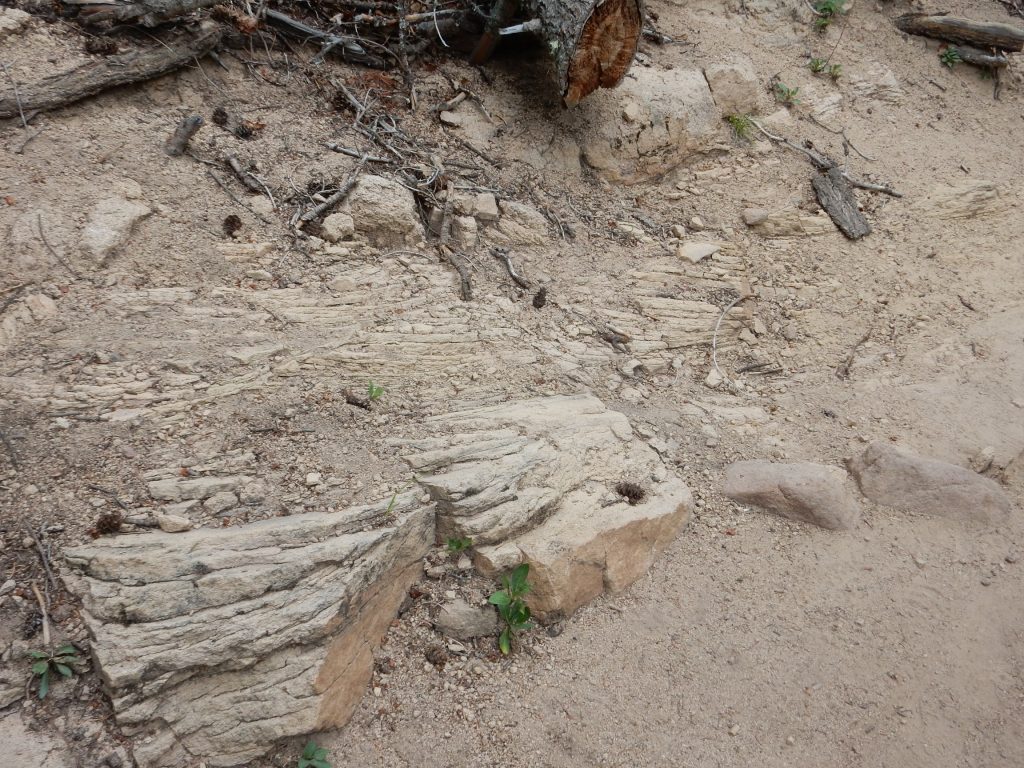 I reach my car and consider. Back to Albuquerque and the interstate home? Faster once I’m on the freeway, but it’s close to rush hour in Albuquerque. I decide to head straight north on the road through Madrid.

These beds catch my eye. 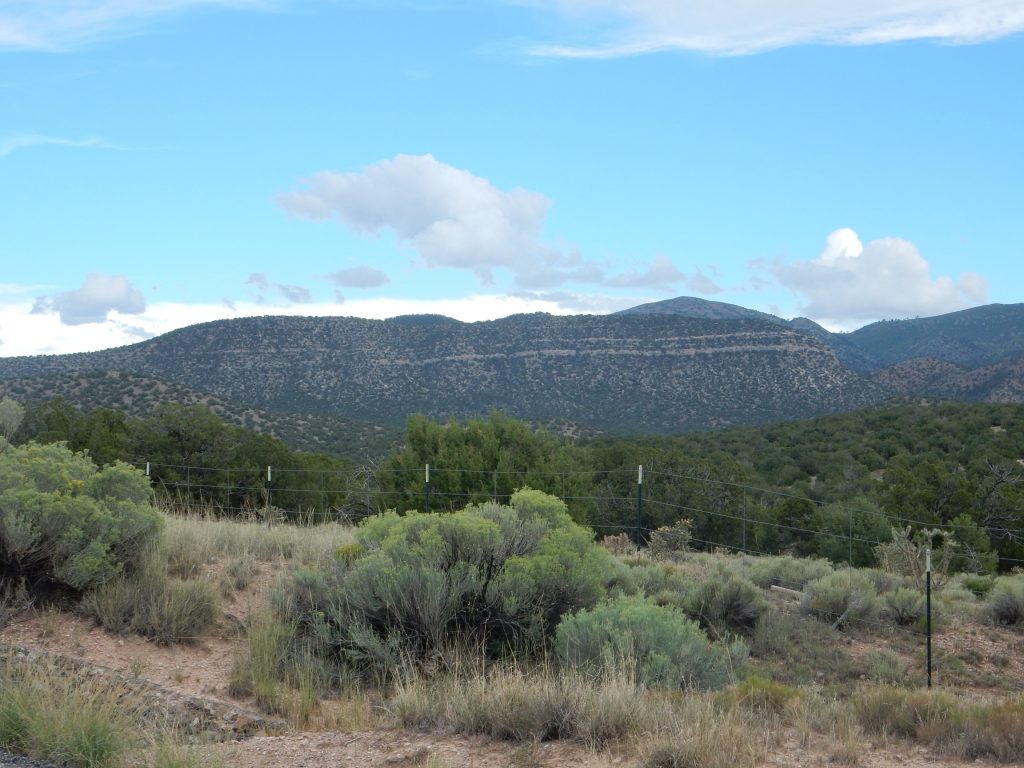 Alas, I have no geologic map for this area. Dunno.

From there, through Madrid and Cerrillos and via Santa Fe to home.