I’d been talking with my friend, Steve Harris, for some time about taking his family to the rock glacier on Cerros del Abrigo. So this week we finally made concrete plans to head up and do the hike. It turned out that it was only Steve and I: His daughter had a conflict, and his son was under the weather.

Cerros del Abrigo is a ring fracture dome of the Valles caldera. The caldera was formed 1.25 million years ago, when a ginormous eruption emptied a magma chamber thirteen miles across. The roof of the magma chamber collapsed more or less as a solid plug of rock, along a ring-shaped fracture in the rock beds. The fracture left a zone of weakness, and when more magma was injected into the magma chamber not quite a million years ago, some of the magma broke through to the surface through the ring fracture to form the Cerros del Abrigo dome. 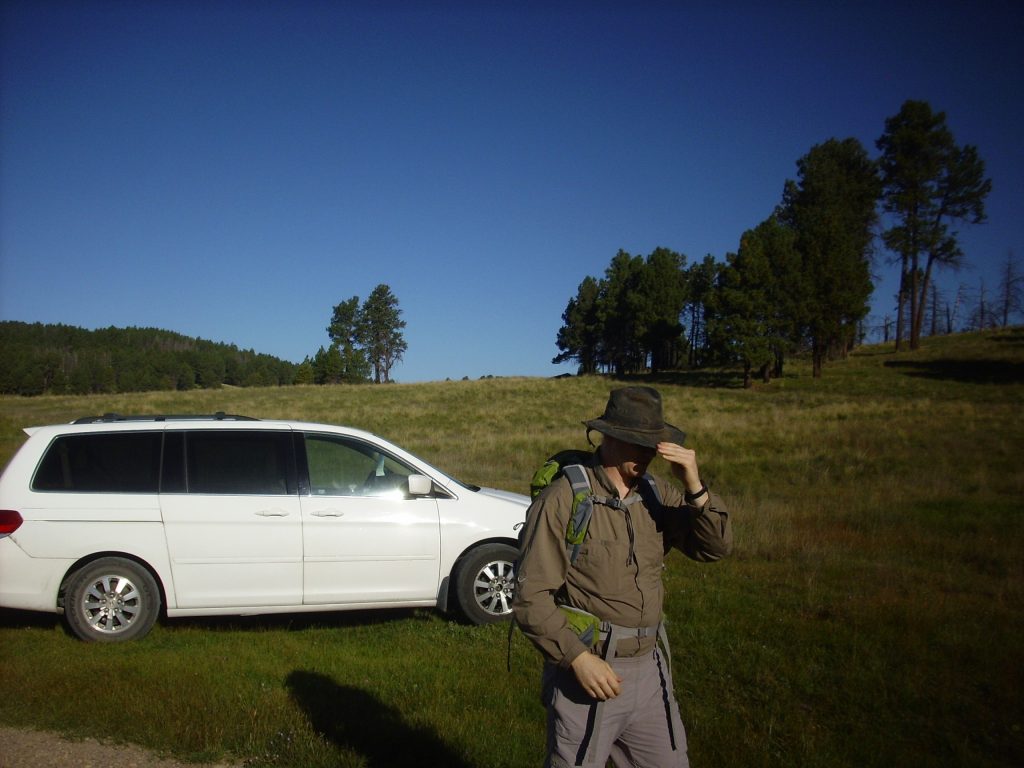 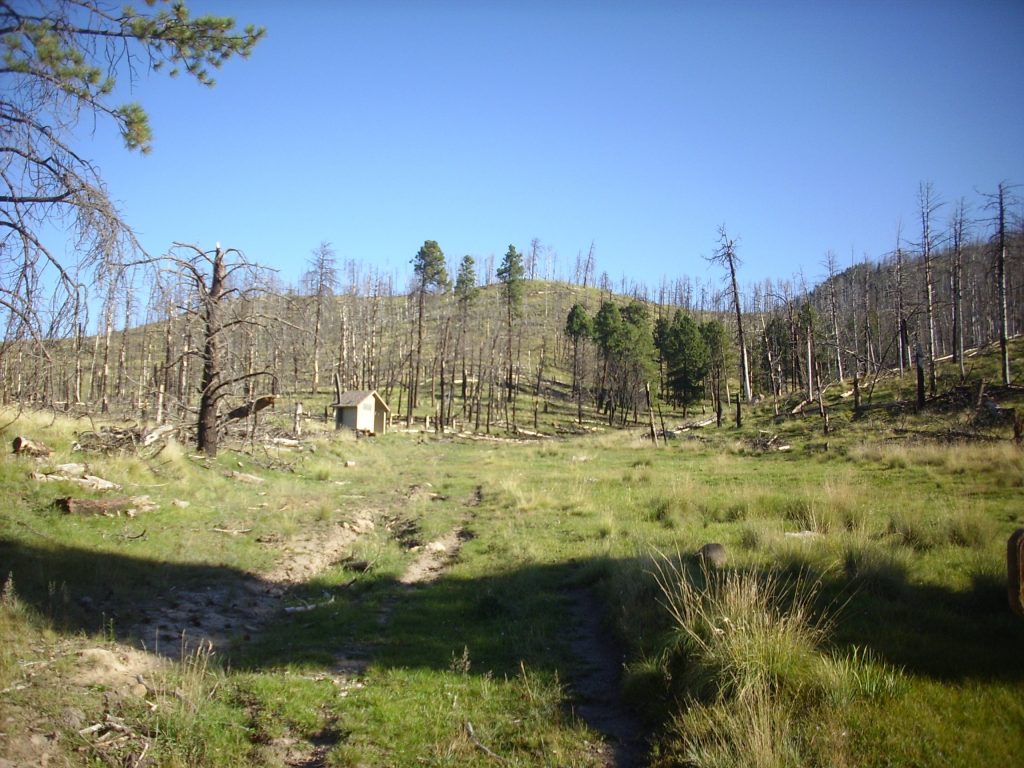 Notice the large number of burned trees. This area suffered considerable damage in the Las Conchas fire in 2011. The hill to the left has a remarkably flat surface, noticeable in the topographic map; some geologists believe it was beveled flat by wave action in a lake filling the caldera 800,000 years ago.

The hike is not terribly strenuous, except that there are a large number of downed trees across the trail that require some detouring. We soon arrived at the rock glacier. 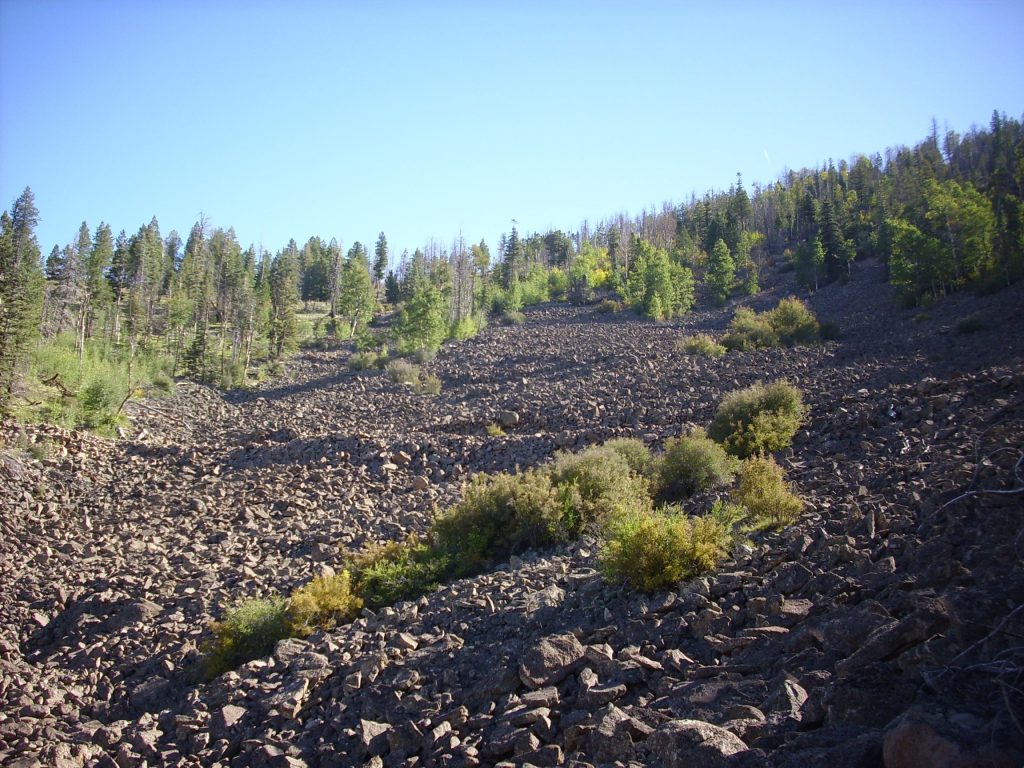 Cerros del Abrigo was produced by the eruption of a very silica-rich magma that formed a rock called rhyolite. Silica makes lava very viscous: Low-silica lava, such as basalt, flows relatively easily and tends to form large flows rather than cones or domes. Rhyolite is so thick that it hardens almost the moment it comes in contact with air. A rhyolite dome forms from magma being injected into the dome at its base; the surface is already hardened and continually cracks and shatters as the dome expands from within. This leaves a rhyolite dome covered with volcanic debris.

After the eruption has ended, and if the debris accumulates in a hollow like this one under cool enough conditions, ice begins to fill the spaces between the rocks. During the last Ice Age, the ice built up in this boulder field to the point where the mixture of rock and ice began to flow downhill. You can see this quite easily in the satellite photograph. The lower tip of the rock glacier forms a very high wall that is quite distinctive. Not all boulder fields in the Jemez became rock glaciers, but this one and a couple more on other high peaks definitely show the distinctive flow features.

Steve noticed right away that most of the boulders here are heavily crusted with lichen. This is evidence that the boulders are no longer moving downhill very quickly — understandable, as the ice melted away at least 12,000 years ago. We did look over one patch of boulders that stood out for its lack of lichens and the cracked and broken character of the boulders, quite unlike anything else in the field. I wonder if this area suffered some kind of fire or other local event; I can almost imagine the lichens being burned off and the rocks cracking under thermal stress.

We made our way up to a logging road that crosses the rock glacier. 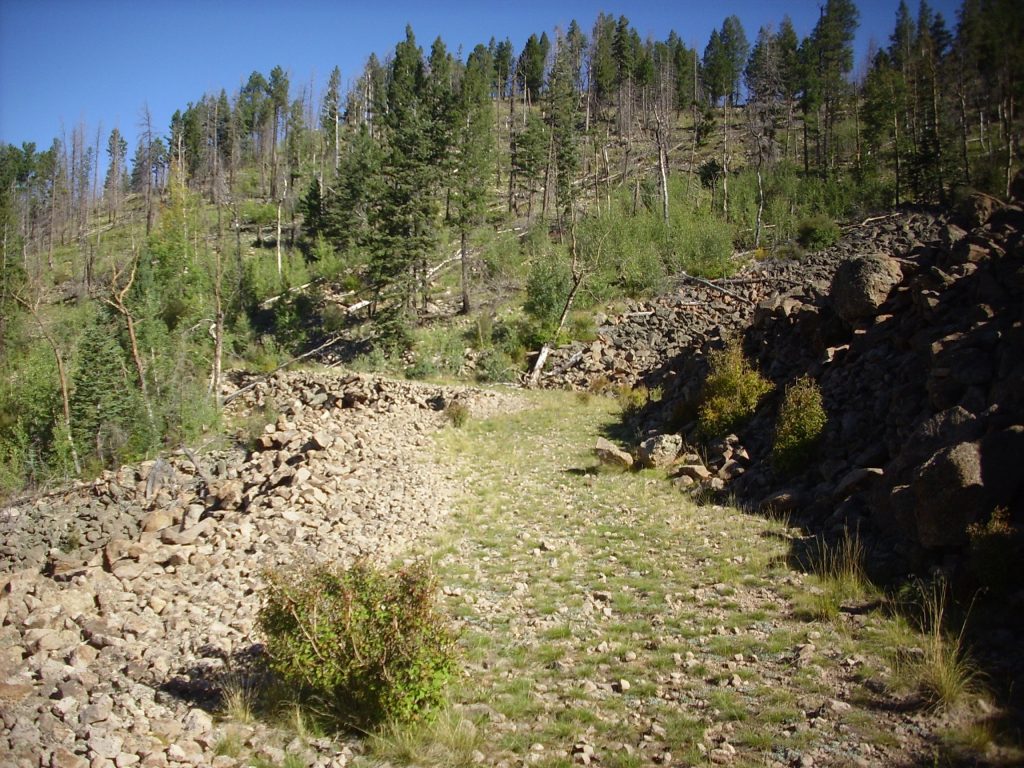 Steve noticed that the rock is overgrown with grass only close to the cut at right. He wondered if this was an indication of where the soil level lay under the boulders. I’ts possible, but my own guess is that this was the part of the road where the loggers made the effort to lay down gravel as crude paving, and the gravel made it easier for grass to take root.

I began a panorama. 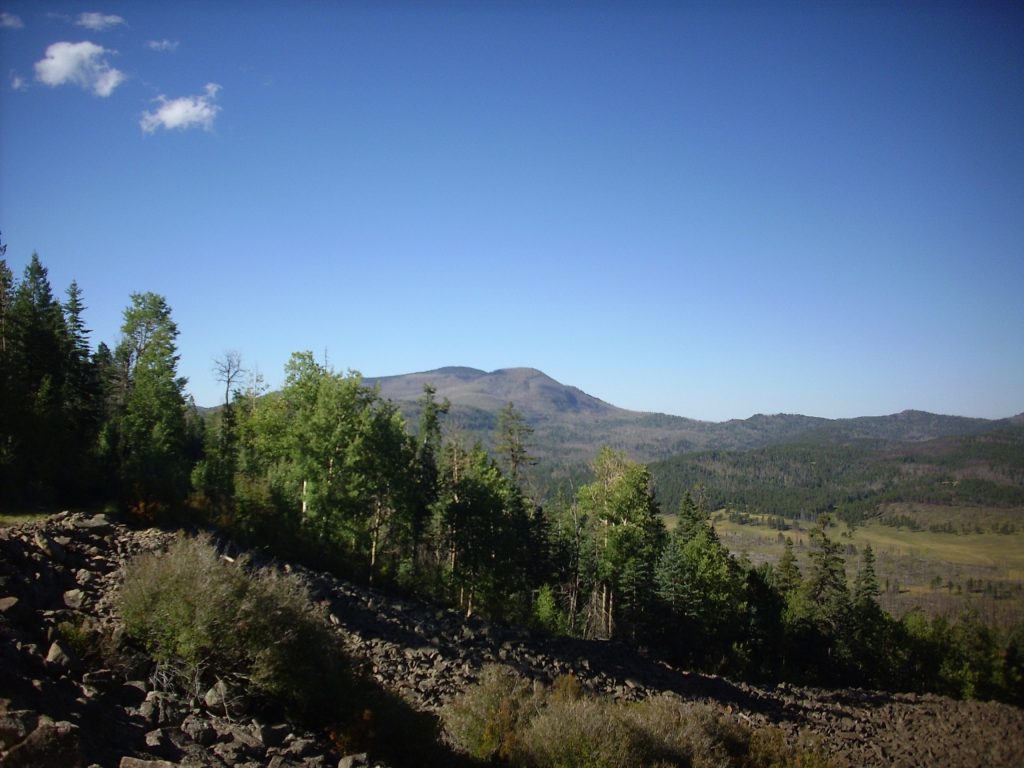 And on the second shot, the camera reported dead batteries and shut down. Well, crep, particularly since I hadn’t put the spares in my backpack. I put in new batteries just yesterday morning. I’d forgotten how the camera tends to go through batteries like candy.

Still, it’s a nice shot of Redondito, the little knob near the center of the photograph.

We started back, and decided to see where this logging road went. There were some nice views. 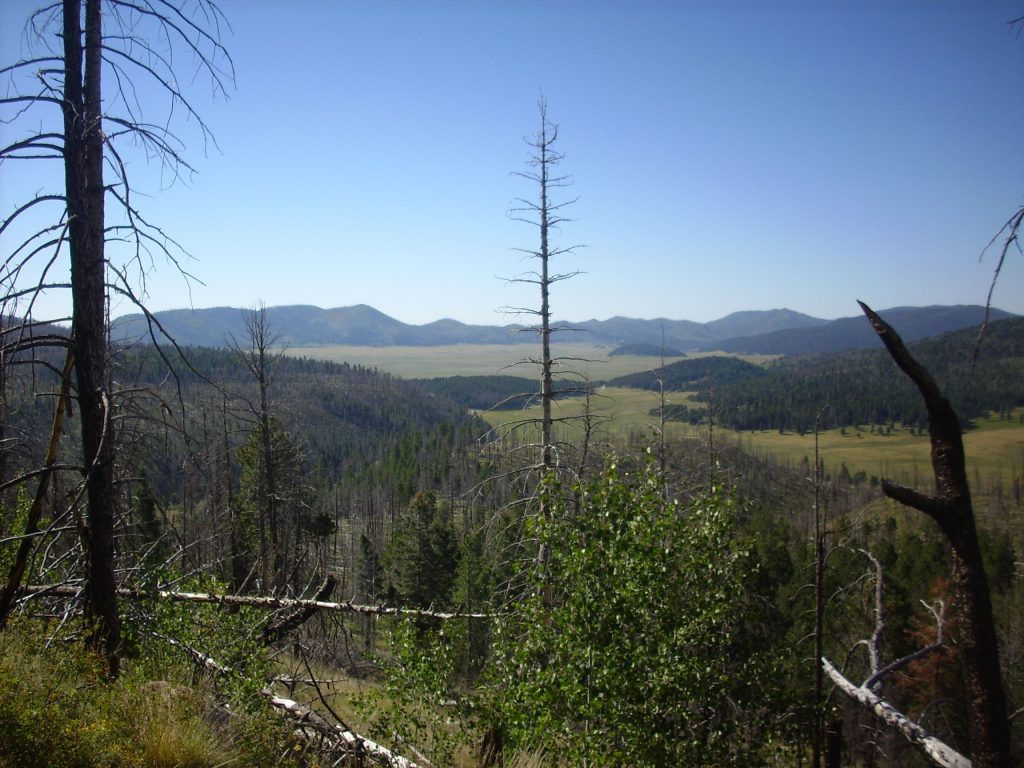 That’s the south rim of the caldera on the skyline, with the Valle Grande at its base.The nearer hill is Cerro del Medio, another ring dome, and the high ground at right is part of Redondo Peak.

Um, dead batteries and no replacements? Turns out that if you let a run-down alkali battery rest for a few minutes, you can squeeze a couple more photographs out of it. I once saved a hard-earned panorama this way (it was at the end of a lengthy hike.)

The road began to go up, and we decided it wasn’t going to take us off the mountain any time soon. We bushwacked down, missed the road in, and ended up coming out the next valley east of the valley we came in. Not to worry; the car was there. 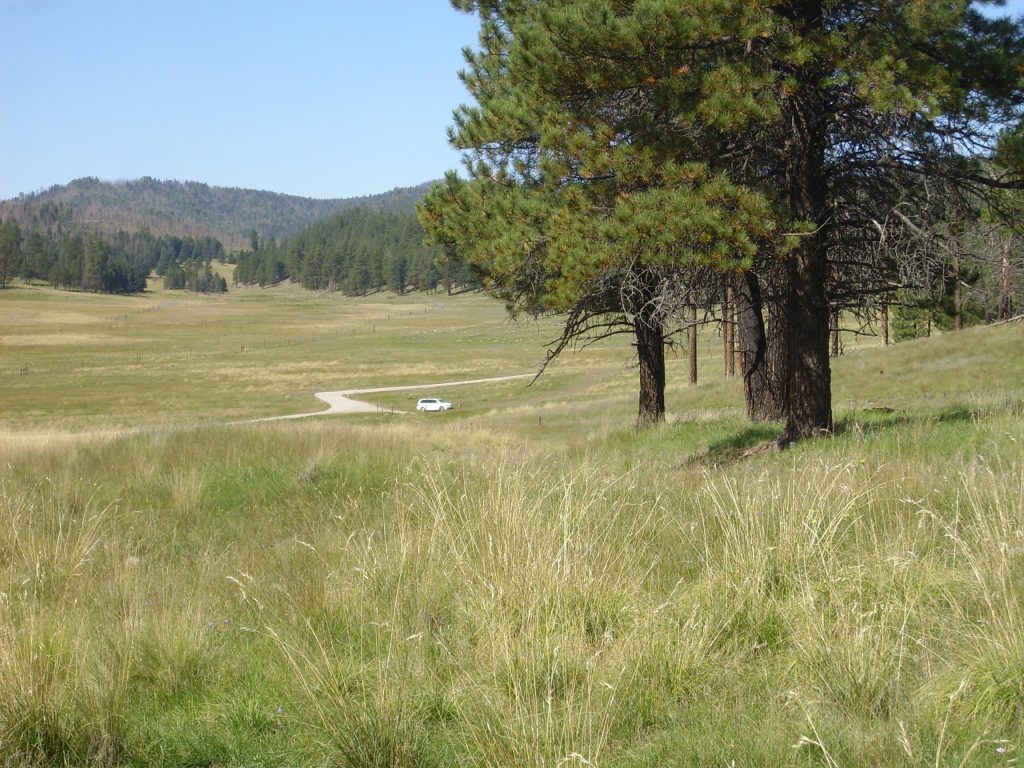 All in all, a very pleasant way to spend a Saturday morning.