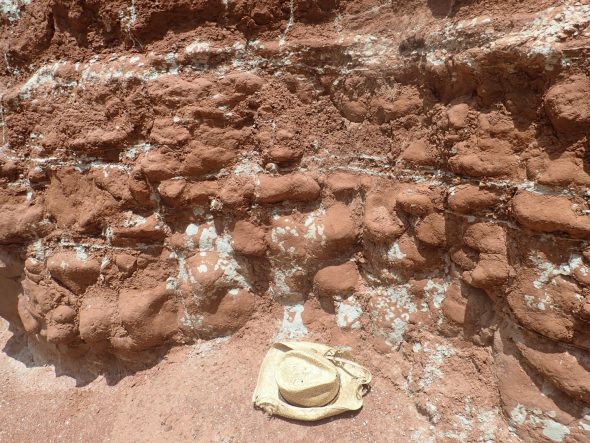 I mentioned in my last post that I wanted to swing by the Salitral Formation type section and some Rock Point Formation exposures on my way home from Iron Mountain, but ran out of time. I took time to make that up today.

It wasn’t a perfect day; there were a lot of clouds. The monsoon is knocking at our doors, and soon I’ll be on geology hiatus until the end of the monsoon in the fall. That’s a glorious time for hiking and I look forward to it every year.

Monsoon? Yes, it’s the technically correct description for what passes for a wet season in New Mexico. Meteorologically, it’s the same seasonal phenomenon as in India. The difference is that their wet season is 100+ inches of rain and ours is 10+ inches of rain. But in either place, it’s rising air from a sun-drenched continent drawing in moister air from the adjacent oceans.

Anyway, I got to a point west of Abiquiu and the light was just right for a panorama.

We are looking at Canones Mesa, which is part of the northern fringe of the Jemez Mountains. The spectacular white beds are exposures of the Abiquiu Formation, composed of volcanic ash and debris derived mostly from the San Juan volcanic field to the north and about 25 million years old. The beds are overlain by resistant lava flows of basaltic andesite, around 2.8 million years old, that are kind of a critter to themselves — neither really Tschicoma Formation, nor El Alta Basalt, nor La Grulla Formation, which are the main low-silica formations of the northern Jemez. Well, no one ever said the picture had to be simple.

Dignity is not a big consideration. The type section of the Salitral Formation is in the Youngsville town dump. Which, it turns out, is presently closed:

And they mean it. Locked steel gate plus barbed wire. But the section itself is quite clearly visible from the road.

All three formations are part of the Chinle Group, deposited in the late Triassic, in the ballpark of 220 million years ago. The Jemez was part of a broad river valley, something like the modern Mississippi valley, where periods of tectonic quiescence in which mudstone was deposited were interrupted by tectonic stirrings that spread sheets of sand across the area. The Shinarump and Poleo Formations were such sand sheets. The Salitral was a period of quiescence and slow subsidence.

I take a couple more pictures, so that I have one for the book and another I can sacrifice to the public domain for Wikipedia. I don’t know that it terribly matters, but I’m just a little more comfortable using a photo I still retain copyright to for the book. I’ve just about decided the book is unpublishable as either paper and ink or as a Kindle style ebook, so I may simply bequeath the entire site to the New Mexico Geological Society to host permanently on their website, if they’re interested. I haven’t decided for sure yet whether to make the offer.

Then it’s off to look at exposures of the Rock Point Formation in an unnamed gully draining Mushroom Canyon. It’s to be found just below the Entrada Sandstone but above the Petrified Forest Formation. I find a parking spot and walk to the edge of the gully.

It’s easy to distinguish this formation from the Entrada Formation, which is a light-colored sandstone. Telling it from the underlying Petrified Forest Formation is more challenging. Both are redbed formations; the distinction is that the Petrified Forest Formation is mudstone while the Rock Point Formation is siltstone to fine sandstone. What I see here looks like siltstone, but I won’t be more confident until I trace the beds from somewhere I can see them close up. And the gully bank is very steep and high here; there is no safe way down.

We saw the Poleo Formation at the Youngsville dump. The Petrified Forest Formation sits atop the Poleo, and both it and the Rock Point Formation above it are part of the Chinle Group. The Entrada Formation is separated from the Chinle Group by one of the most significant erosional surfaces in the Mesozoic record of western North America. Here this is a gap of 45 million years in the geologic record. The Wingate Sandstone, Kayenta Formation, Navajo Sandstone, and Carmel Formation, found on the Colorado Plateau, are all missing here, either never deposited or eroded away.

I work my way across the bank to where I see the Entrada contact across the gully.

The rock at top is certainly Entrada Formation, which makes a very sharp contact with what must be the Rock Point Formation, showing between cones of sediments eroded off the beds above.

From here I work my way into the gully for a better view.

Alas, GPS is hit or miss in the gully. I don’t have exact coordinates for this.

Here the overlying Entrada Formation has eroded entirely away, replaced with a thin veneer of gravels.

Here we see two resistant beds in the Rock Point, separated by a slope of softer material.

Here the gully bottom becomes boggy and I have to be careful to step to the side.

I come to some curious sandstone concretions.

I’ve seen similar concretions in the siltstone of the Ojo Caliente Member of the Tesuque Formation off Lemitas Trail. The goblins of Goblin Valley seem to form in similar sediments. I don’t know the full explanation.

I get two pictures. On this closer view, the GPS simply will not lock. I back up slightly to where more sky is open overhead, and finally get a lock for a second picture.

The yellow sandstone at top is Entrada Formation, with a sharp contact with the underlying siltstone of the Rock Point Formation. You may have noticed in all these pictures that the contact is very level. The Entrada Formation was deposited as sand dunes that marched across a very level siltstone surface laid down in a very slow-moving river valley.

But notice how some of the sand has filled in cracks in the siltstone. The siltstone had dried under the sun and cracked the way drying mud does. Then the sand came along and filled in the cracks.

I’m pushing my luck hiking in a deep gully with rain clouds in the area. I decide it’s time to head out. On the way back:

I don’t see anything that looks like a lower contact with the Petrified Forest Formation, but it might be hard to spot regardless. The Rock Point is up to 70m thick, so the gully may be exposing only the top part anyway. Apparently there is a full exposure 100m thick in Coyote Canyon to the west, with a road nearby, but I didn’t realize that until preparing this post. And the exposure may be inaccessible due to being across private land, so I don’t have too many regrets about coming here instead.

I retrace my steps to a point where I can (with difficulty) clamber out of the gully. The river gravel here includes a pretty nice piece of Pedernal Chert.

The Pedernal Chert is found in the lower part of the Abiquiu Formation. It’s silica leached from the formation that precipitated out in its lower limy beds. I’m not sure we understand the exact chemistry. Regardless, it was a major source of stone tools for ancient peoples and likely an item of trade.

Final photo from the rim. The sun has been clouded out so it’s not a great shot.

It’s not long after noon, but I decide to call it a day. Normally one of the best things about wanderlusting is being alone with my thoughts. At the moment, though, I find that being alone with my thoughts is unbearable. Without going into details, I did something incredibly boneheaded a week or two ago and it’s likely to turn my life upside down. Say a prayer for me, if that’s something you do.

I divert to Walmart in Espanola. My town has canceled its fireworks display, so I had decided to buy a small package of home fireworks. Also, I had my regular physical yesterday, and I’m doing great except for, y’know, that one thing. My headaches are actually getting much milder again, though I have a persistent taste like burned rubber and hot metal in my mouth, and that could be a symptom of cerebral nerve problems. But otherwise doing great.

Except my weight is down. Part of it is that I feel like I have a big cannon ball in the pit of my stomach, in place of an appetite. (See: “boneheaded”). But I kind of have permission to eat a nice steak for the 4th, and eating steak is a rare treat. So I got that at Walmart along with the fireworks and a couple of other small items. Hope I can get it down.

Happy 4th of July to my American readers.