My mother, all my siblings, and some of my nephews and nieces were in town this week for a reunion. It was wonderful to sit around and reminisce. 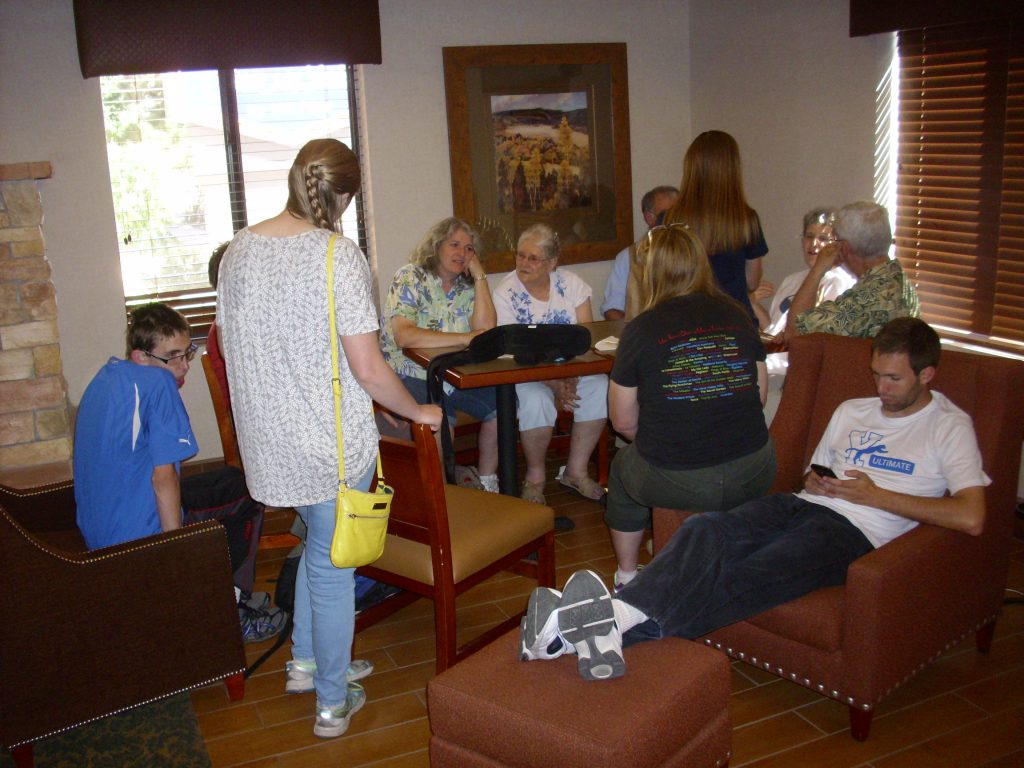 It was also nice to see some local scenery. We went out to Overlook Park, and I found the lighting was just a little different from any other time I had been out there. This highlighted a couple of outcrops in the canyon I hadn’t noticed before.

Here’s a thick section of the Totavi Lentil, Puye Formation, north of the overlook. 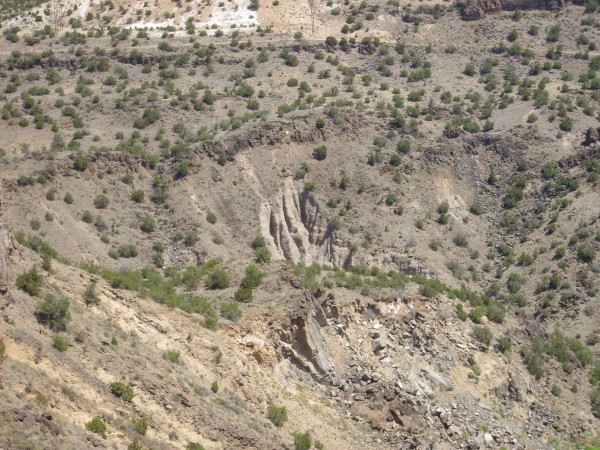 The Totavi Lentil is a bed of coarse conglomerate deposited by the ancestral Rio Grande. 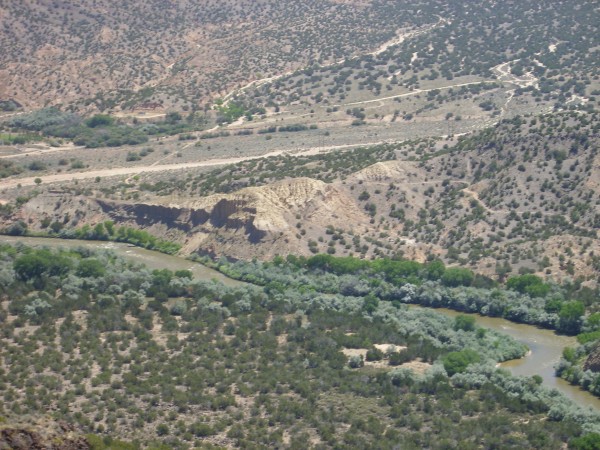 We spent the rest of the day visiting Guaje Pines Cemetary, where we have way too many old friends now, and the museums in town.

Friday was Bandelier National Monument. I was escorting my elderly mother, who used a scooter to get around, when we heard that familiar rattling sound: 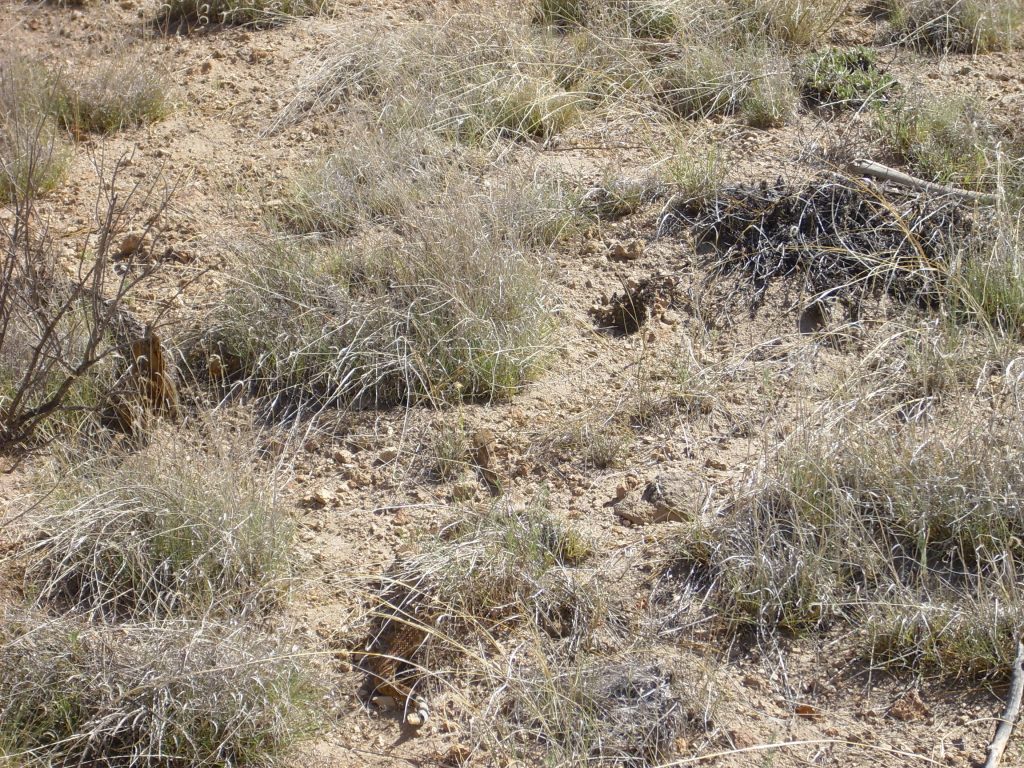 Crotalus atrox, the Western diamond rattlesnake. You may have a tough time seeing it; the protective coloration is very effective. Look for the rattle nearly at the bottom of the photograph and just left of center.

Mom in her scooter. 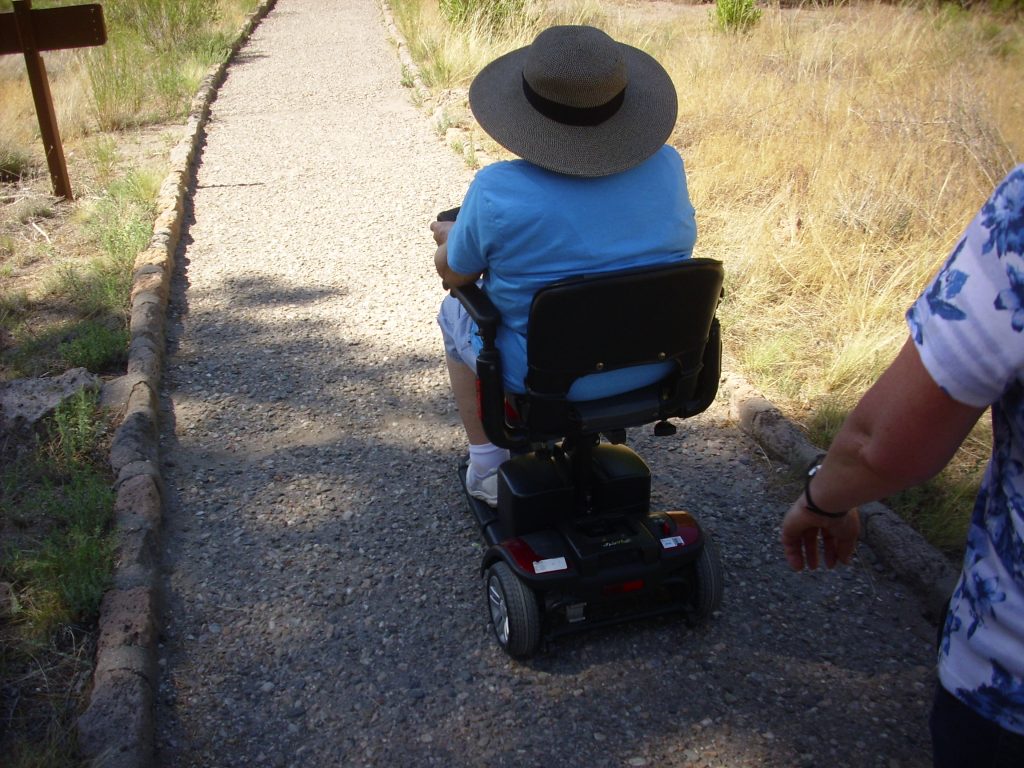 Then lunch, and a hike down to the upper falls in Frijoles Canyon. This area is interesting for its maar deposits, formed when hot magma penetrated surface rock saturated with groundwater and the resulting steam explosions laid down beds of shattered rock and bits of solidified lava. 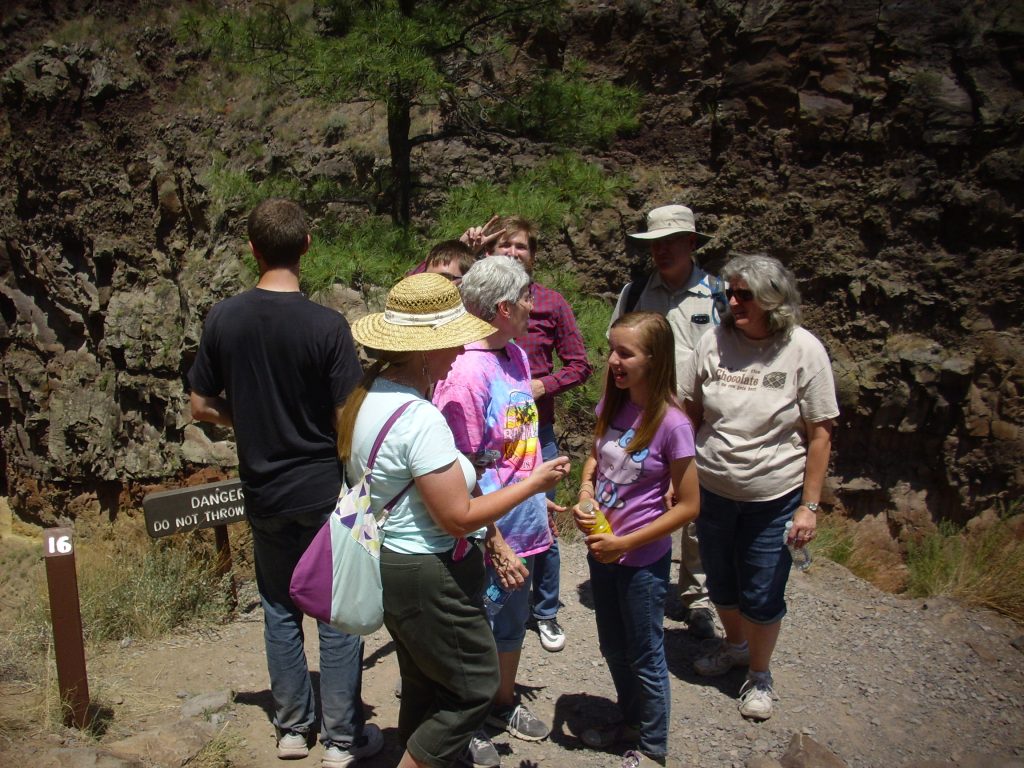 Group photo by the giant pots at the visitors’ center in White Rock. 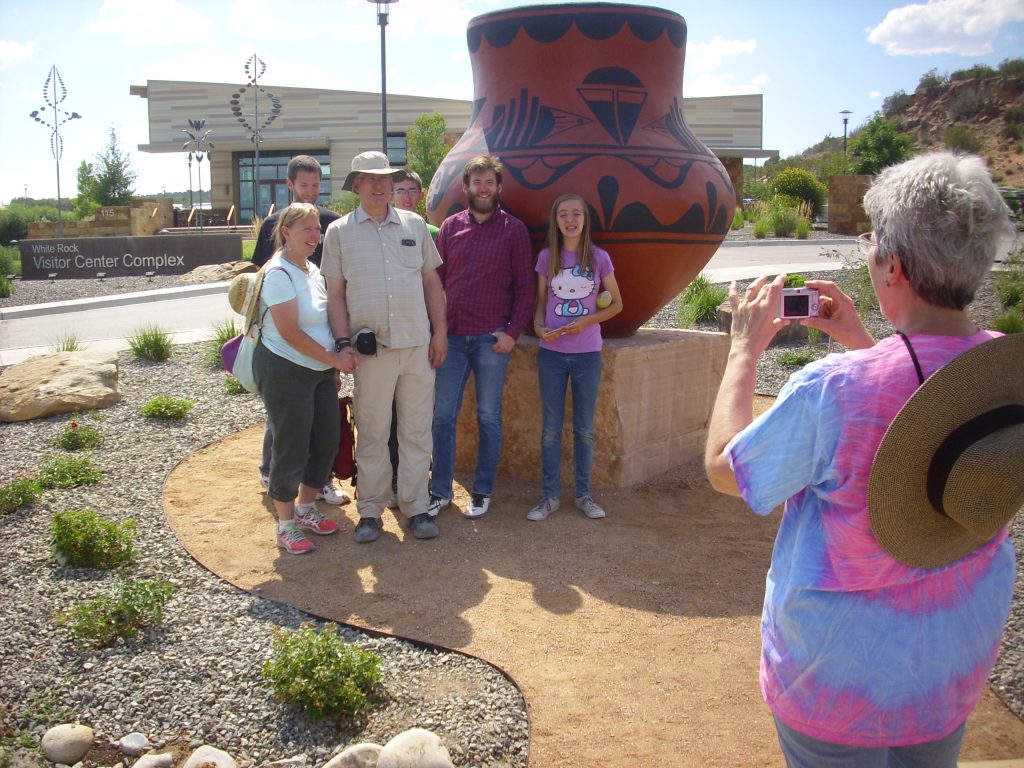 Saturday was the walking tour of the historical district in Los Alamos. This includes Fuller Lodge, dating from before the establishment of the laboratory and the oldest building in Los Alamos still in use. 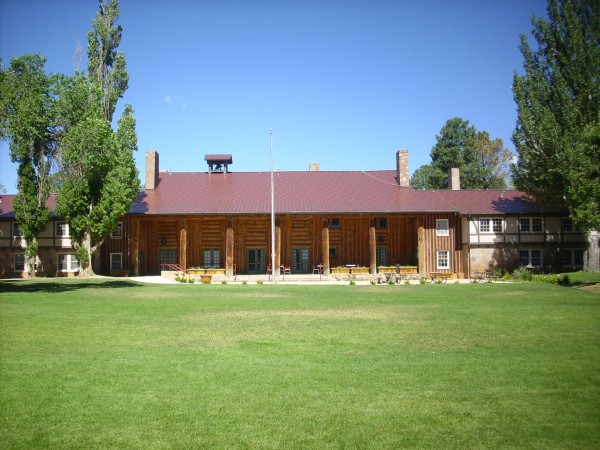 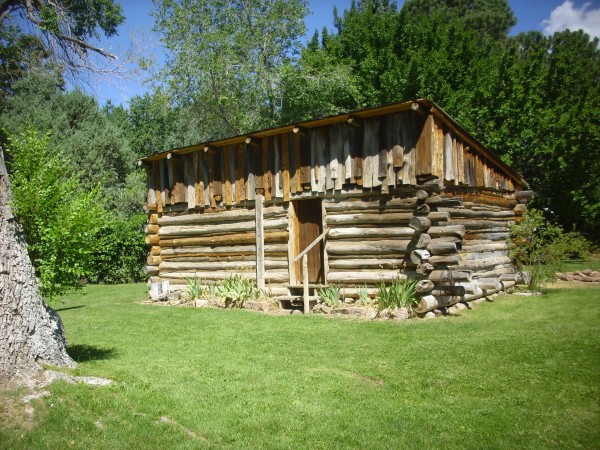 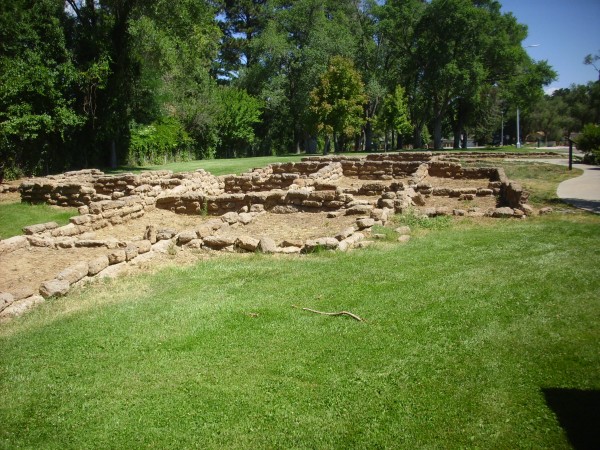 We finished up at the Pajarito Environmental Center, where I got a shot of the woodpeckers on the dead tree to the west. 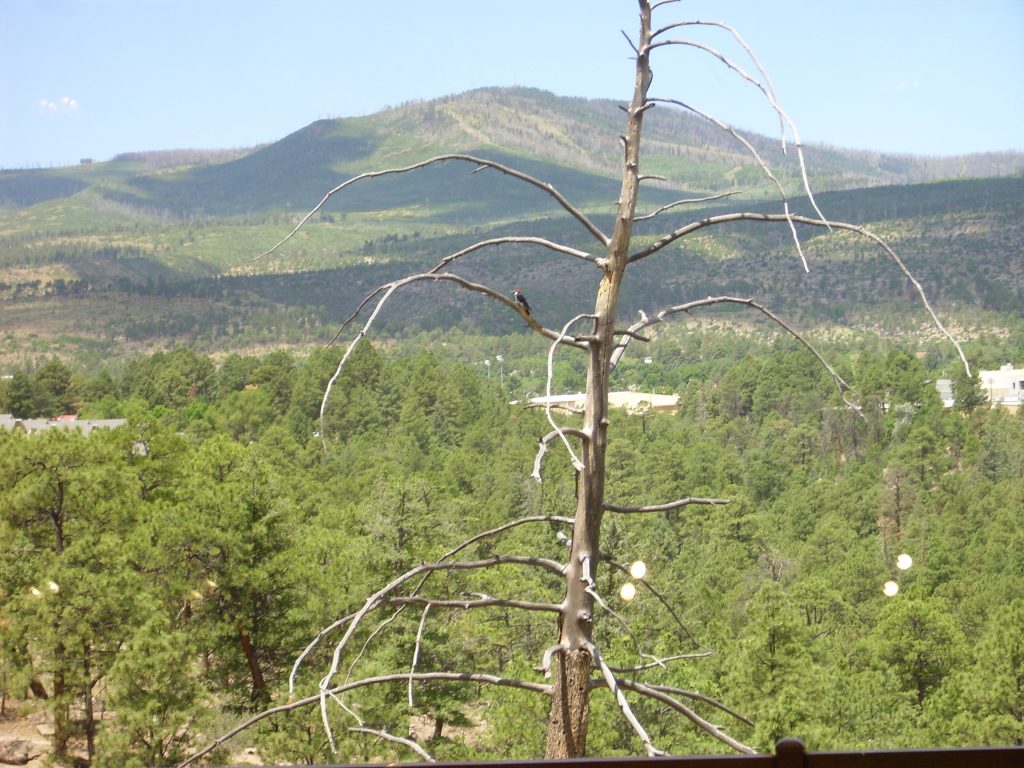 I’m still recovering from the shoulder surgery, so it will be some time before I have a proper wanderlust post. However, my P.T. session today went well — I broke through a couple of plateaus on range of motion, and so avoided having to have a “manipulation” — and my right shoulder, the supposedly good one, seems a bit less sore. I even managed to put in five hours at the office today.

I’m looking forward to our typical fall dry spell. By then I should be in shape to do some real wanderlusting again. For now, I’m not quite in good enough shape, and the monsoon will likely kick in before I’m ready for a long drive in the hills.