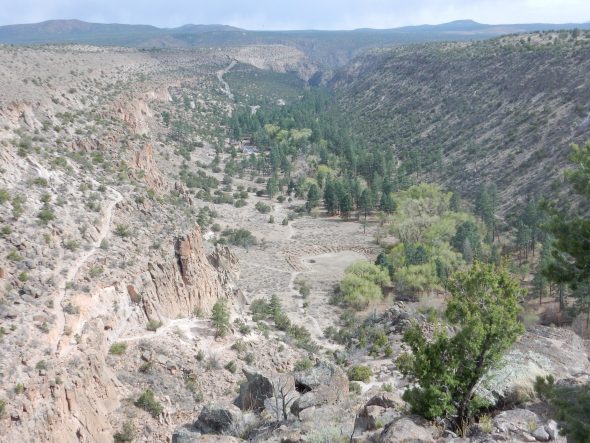 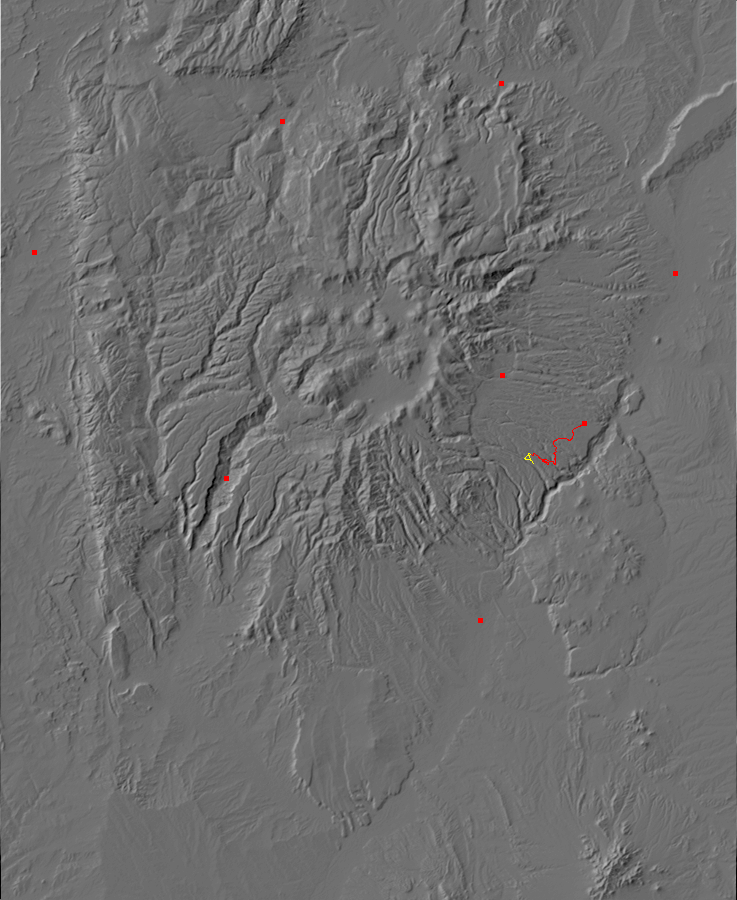 Friday was supposed to be the day to paint Nathan’s room. However, I also had to take the dog to the vet to have her stitches removed, and Nathan hadn’t yet gotten up when it was time for the dog’s appointment. When I came back and he emerged from his room, he announced that he did not want his room painted that day. On the other hand, I got the frame of the garage door painted and did some plastering of a badly battered support column in the basement.

That still left me with some time on my hands in the early afternoon, so I decided to take a short hike to the Tyuonyi overlook at Bandelier. I’d been thinking about this one for a while, because I wanted a nice elevated shot of Tyuonyi ruins for the book. It would also give me my exercise quota for the day and give me a chance to test out the new Spot satellite messenger, for which I had finally activated the service.

I arrived at the trail head, turned on the Spot messenger, and hit both the “at trailhead” and “track” buttons. If everything was working right, Cindy and I would get email messages announcing that I was at my trailhead and giving the GPS coordinates. I was at the Frey trailhead: 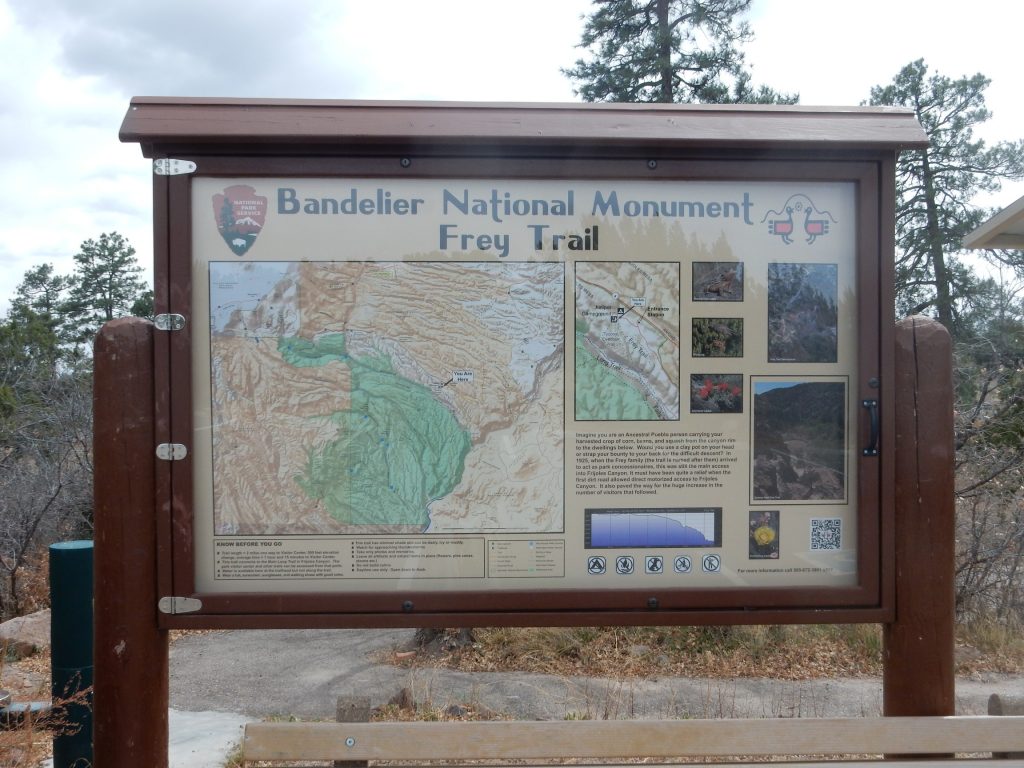 The Frey trail was the only way into Frijoles canyon for monument visitors until the first dirt road went in. I ought to hike it some day, as well, but today I was interested in the Tyuonyi overlook. I hiked a short distance down to the amphitheater and found I was not alone. 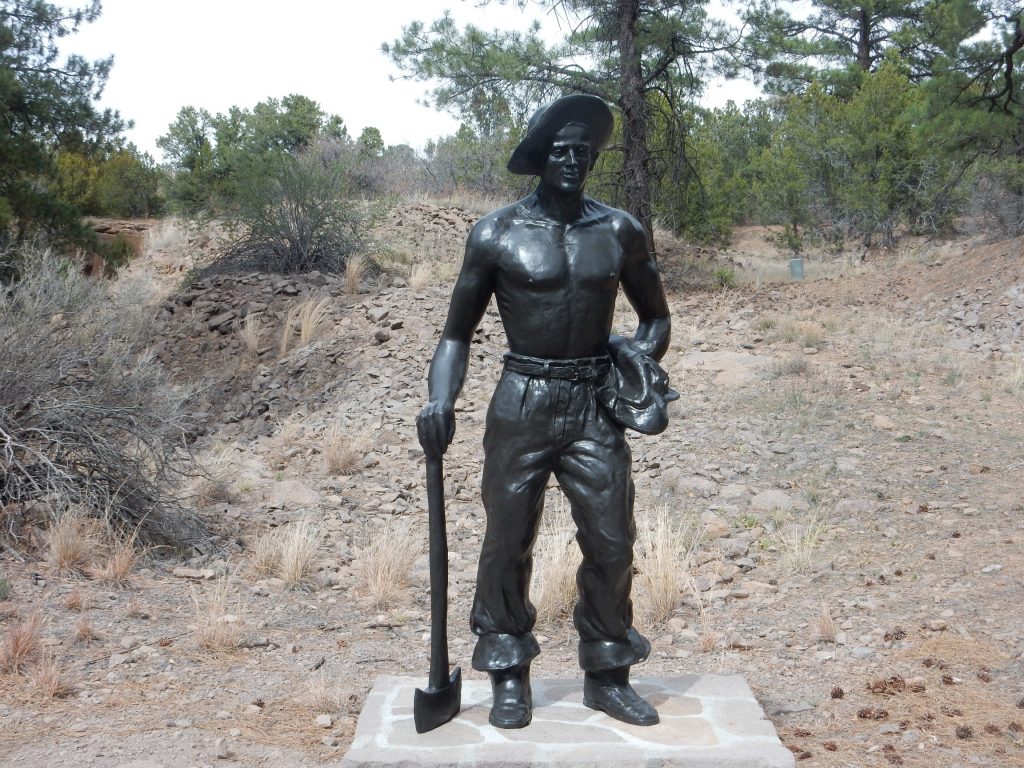 A sculpture of (I believe) a Civilian Conservation Corps worker, rendered in Heroic Realism style. The CCC did a lot of development of Bandelier back in the 1930s, during the Great Depression.

Nearby was the Tyuonyi overlook trail head. 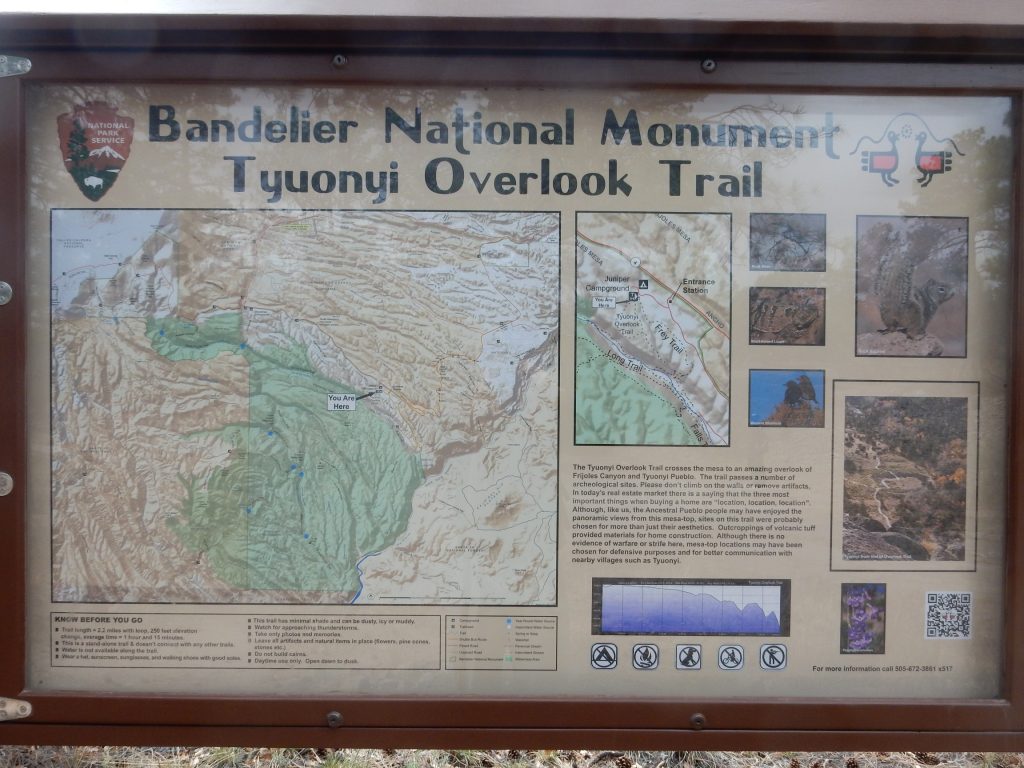 It was about this point that my Spot messenger actually transmitted my “at the trailhead” message, judging from where the message put me when I checked it after getting home. I don’t think the service promises anything more than that the message will go out within 15 minutes. 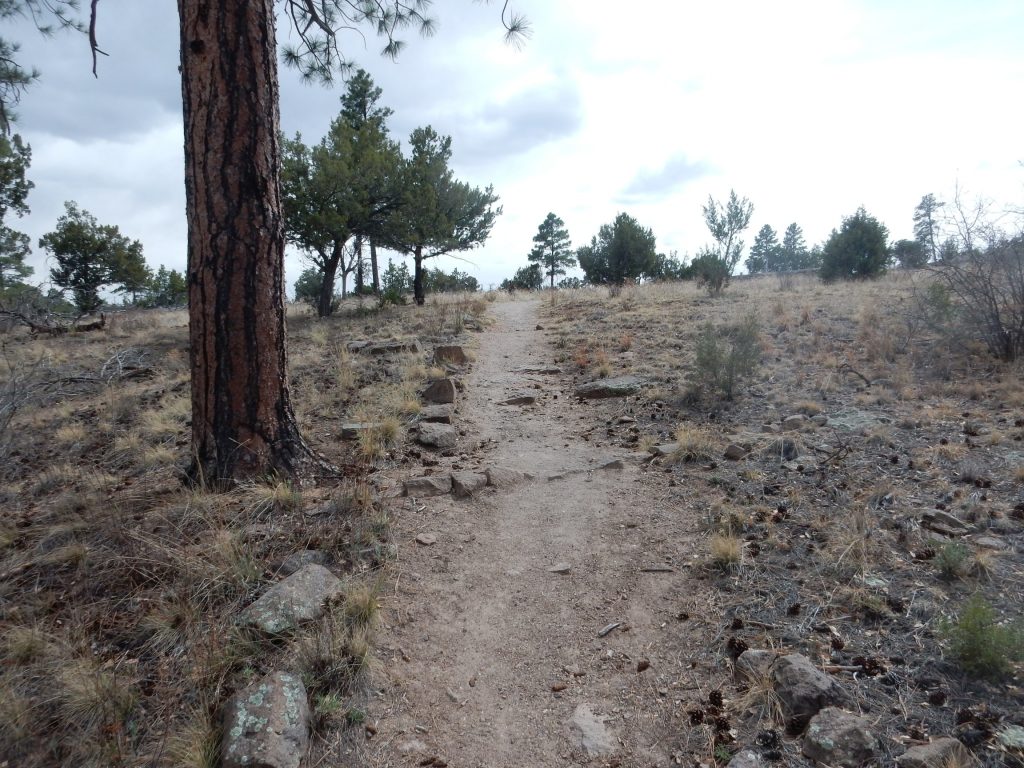 This is typical of the not-quite-primive trails at Bandelier. It is not paved, like the main tourist trails, but it is well-maintained, with erosion controls like the one near the center of the image.

First stop along the trail is an experiment in reproducing Ancestral Puebloan agriculture. 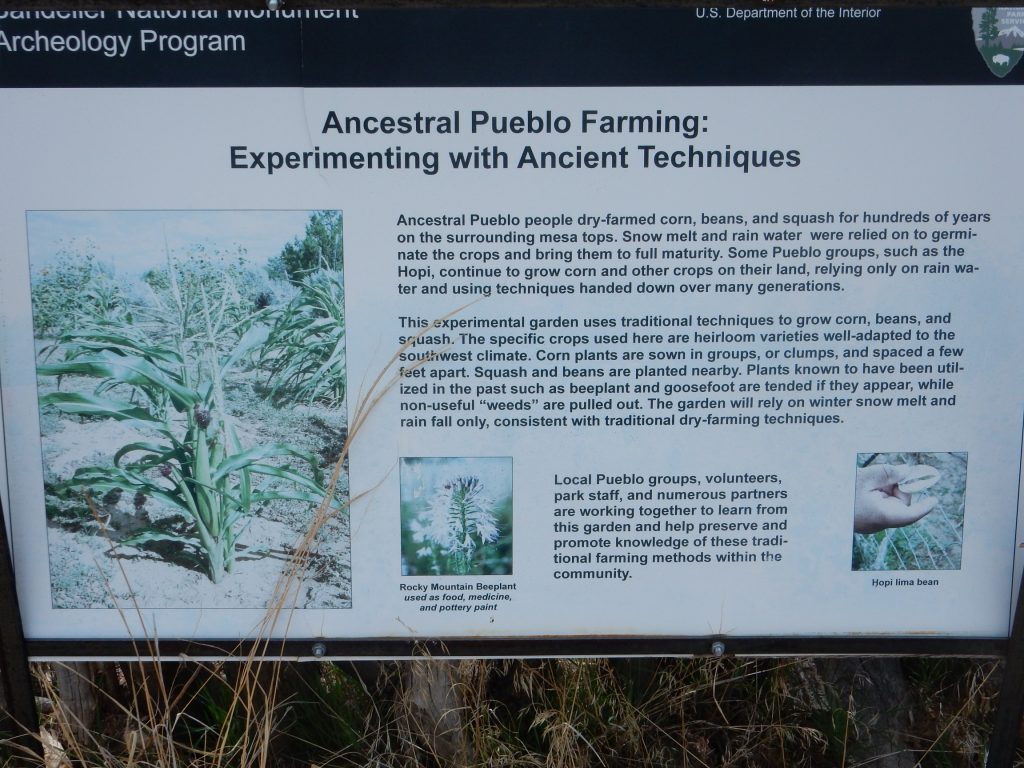 They seem to have some discomfort with the concept of “weeds.” 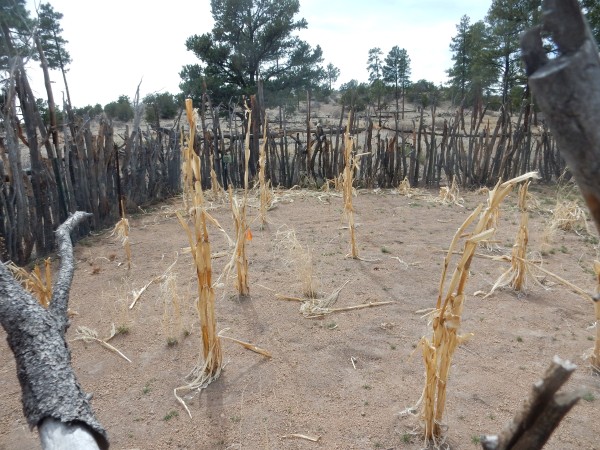 This is the remnants of last year’s garden, of course. The corn is kind of sorry looking, but then the idea was to grow it as the Ancestral Puebloans would have, with snow and rain water alone. If you click to enlarge, you’ll see that the soil is rich in bits of pumice. This is the El Cajete Pumice, which covers many mesa tops in the Bandelier area. It was erupted around 55,000 years ago from a vent south of Redondo Peak, as part of the most recent cycle of volcanic activity in the Jemez. The pumice holds moisture well, and Ancestral Puebloan settlements in the Jemez often seem located to take advantage of this. 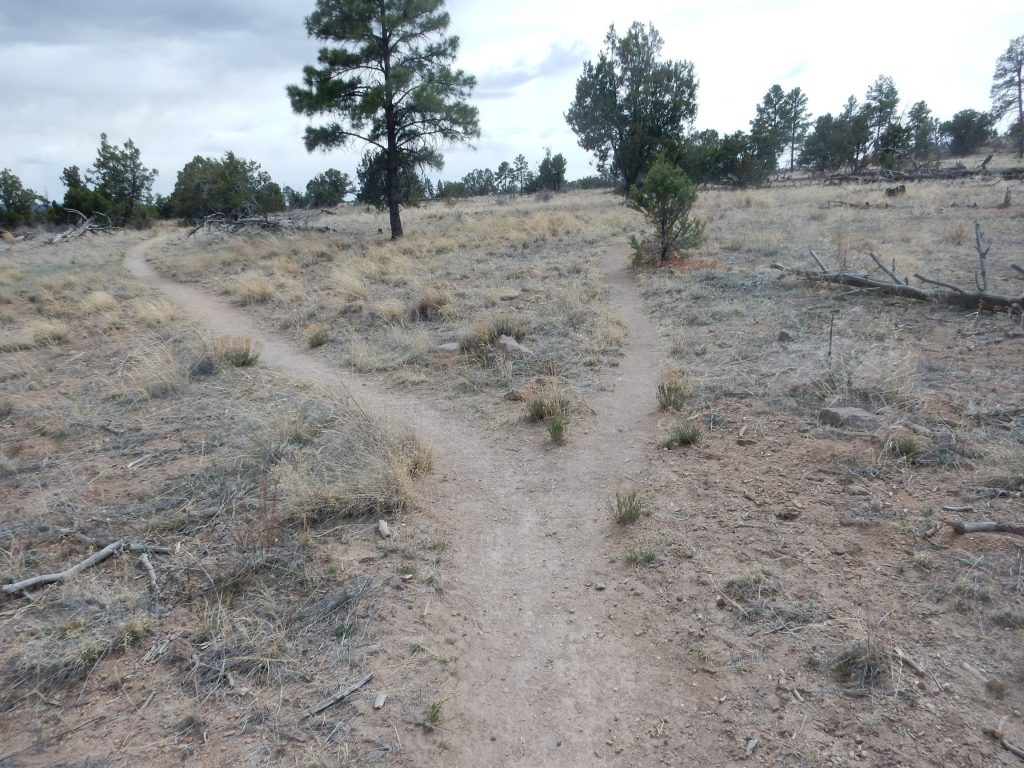 No yellow wood was evident, so perhaps it made no difference, but I took the road less traveled by (on the right.) This looped close to the canyon rim. I planned to return on the other path so I’d get the grand tour.

I was struck by some of the vegetation. 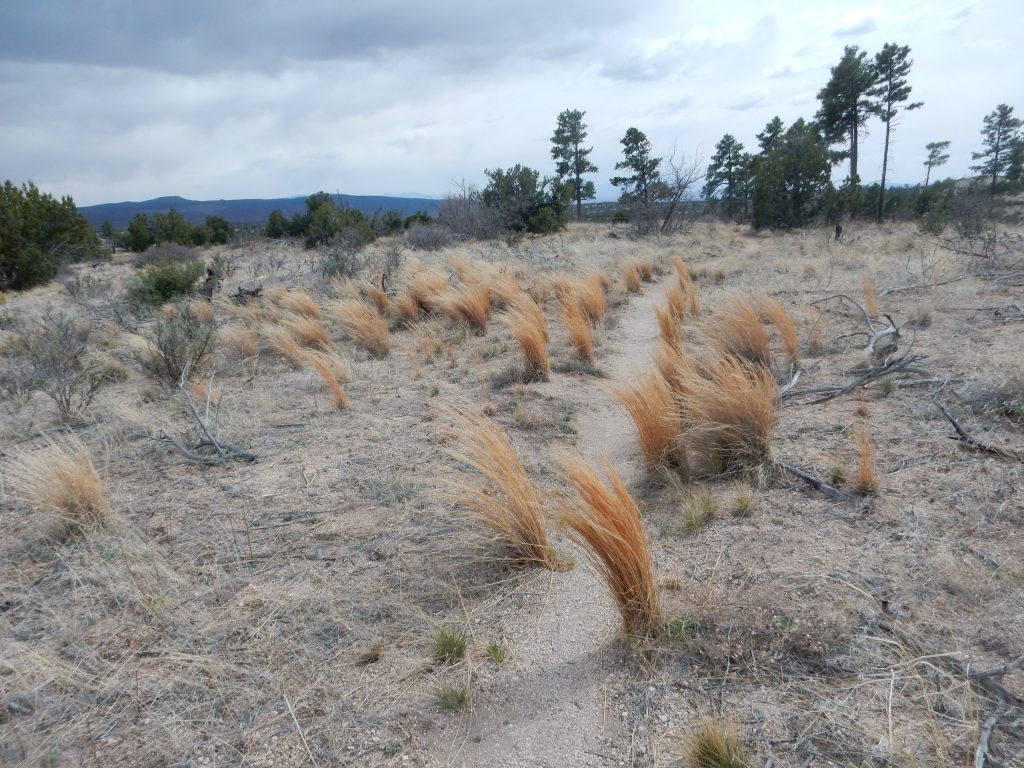 I’m not sure what species the tall bunchgrass is here. It’s not widespread, but seems to be concentrated in a few favored locations. Possibly Aristida purpurea, purple three-awn?

I continued to a spot with a nice view of the San Miguel Mountains (and some more of the bunchgrass.)

The San Miguel Mountains, on the skyline, were an eruptive center of the Paliza Canyon Formation, which erupted over eight million years ago. The Paliza Canyon Formation is  possibly the most extensive in the Jemez volcanic field, making up all the older rocks of the south part of the field and being present at the base of the north caldera rim. Outcroppings are also found in the west caldera rim and in Canyon de San Diego southwest of the caldera, and rock of the same age and makeup crops out in Los Alamos Canyon at the mouth of the reservoir, suggesting this formation is present under the Bandelier Tuff underlying most of Los Alamos.

The foreground is the very flat upper surface of the Pajarito Plateau, underlain by Bandelier Tuff with a thin veneer of El Cajete Pumice. This is cut by several deep canyons. The Bandelier Tuff was produced by two giant caldera eruptions, 1.62 and 1.25 million years ago, the second of which created the Valles caldera. The caldera eruptions produced vast quantities of volcanic ash mixed with hot gas, and this red-hot mixture was dense enough to flow over the ground like a liquid for miles. The ash settled to the ground to produce an ignimbrite, or tuff, now known as the Bandelier Tuff.

The trail passed close to the rim of Frijoles Canyon, and I took a panorama.

It is possible to hike most of the length of the canyon on a well-maintained trail; this makes a pretty decent day hike. We are up canyon from the visitors center here, with the Frijoles Narrows just visible to the right in the distance.

Here’s a mound of the El Cajete pumice that forms a veneer on the mesa tops. 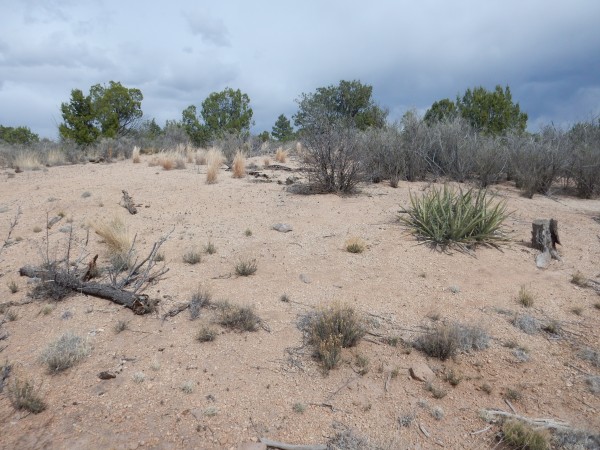 This stuff is never more than a few meters thick, but is quite extensive throughout the southern Jemez. Here’s an approximate exposure map, from the book: 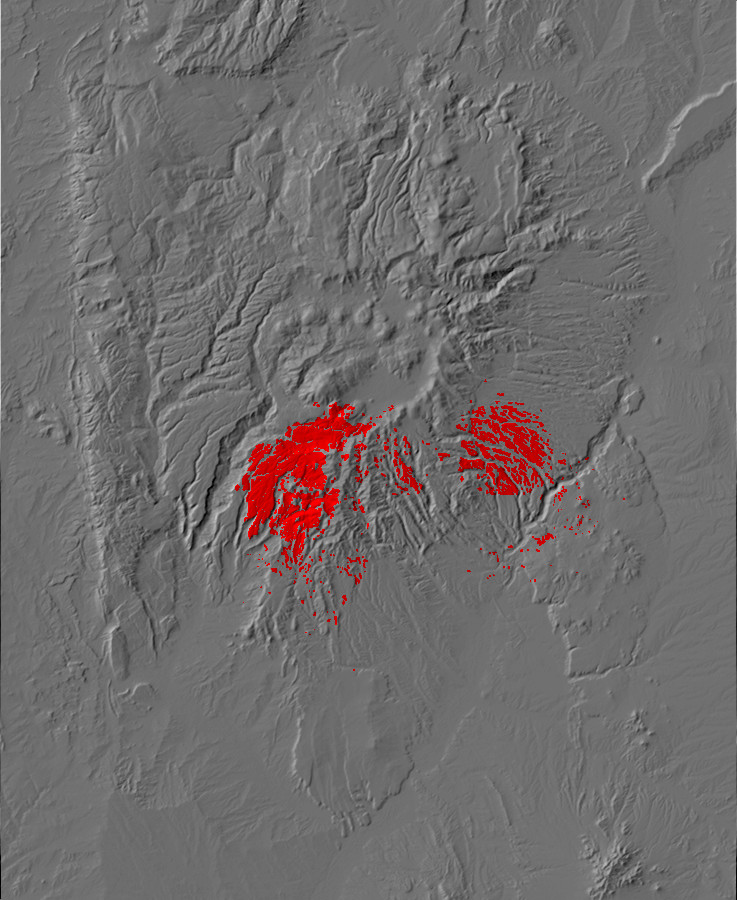 Further down the trail, I took a shot nearly straight up the Frijoles Narrows. 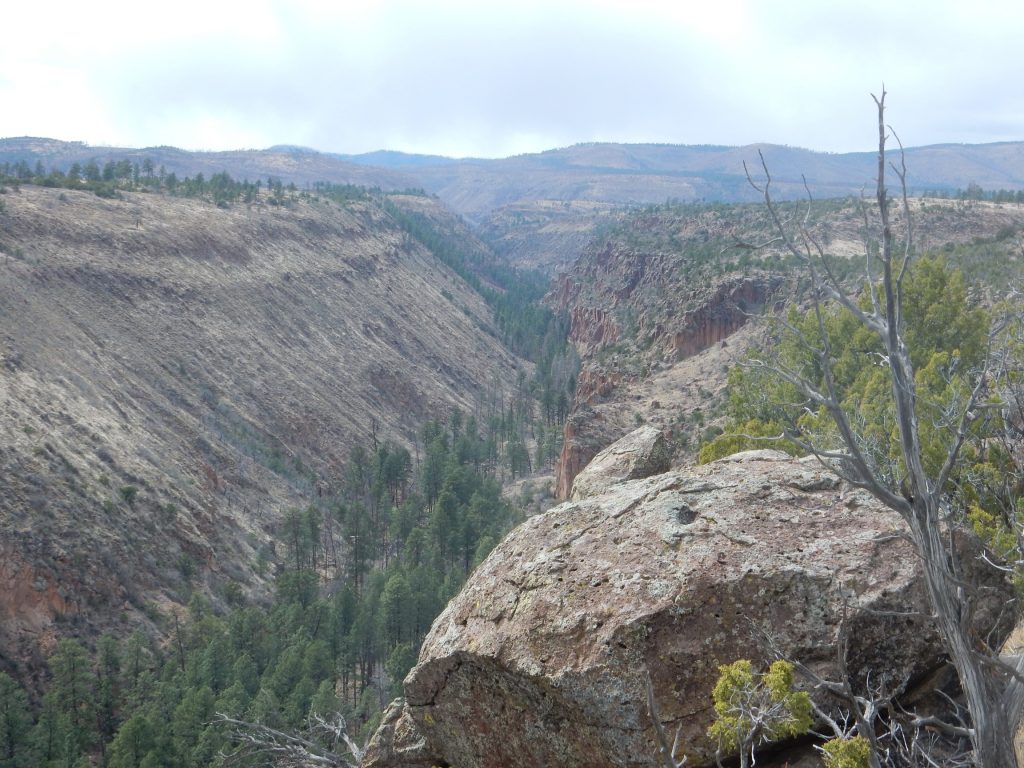 Most of Frijoles Canyon is underlain from rim to river with the Tsherige Member of the Bandelier Tuff, produced by the eruption  1.25 million years. In fact, the thickest exposures of this member are in Bandelier National Monument. This point on the rim overlooks the only part of the canyon where the older Otowi Member, from the eruption 1.65 million years ago, is exposed. 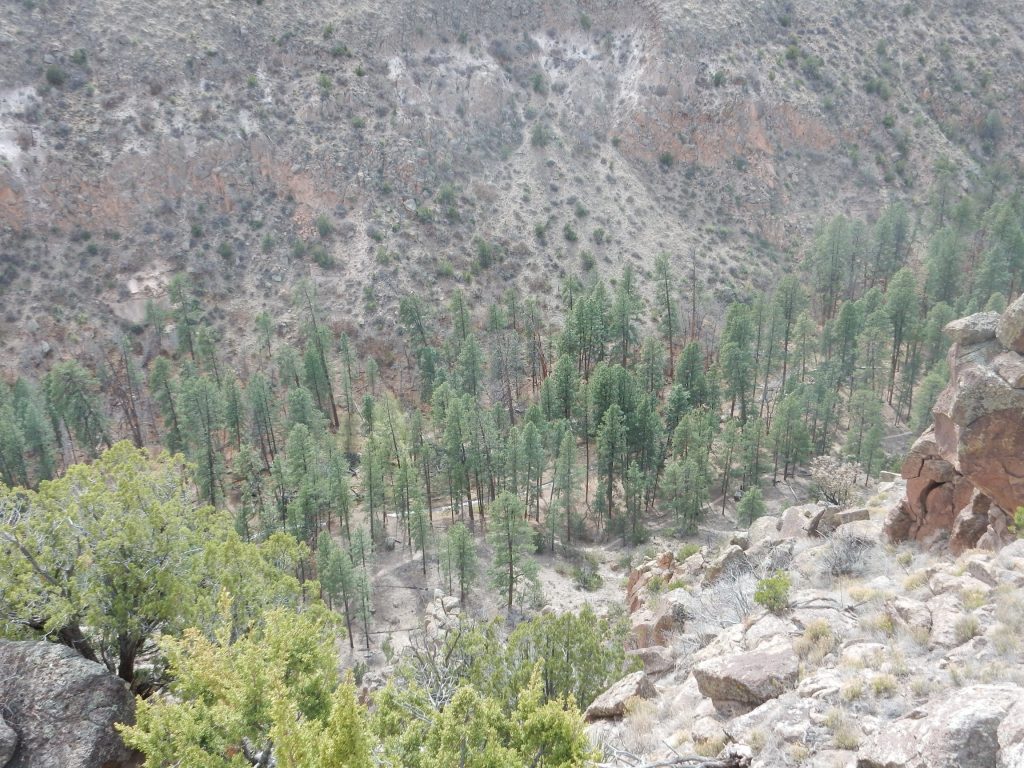 It’s the reddish beds at the very bottom of the canyon. You can also see the Frijoles River, which is the only perennial river of the Pajarito Plateau that reaches the Rio Grande. Alongside is the well-maintained canyon trail.

The overlook trail bent around and I began looking for where it rejoined the other branch of the trail. I found myself heading directly back towards the parking area, and was worried I’d missed the junction until 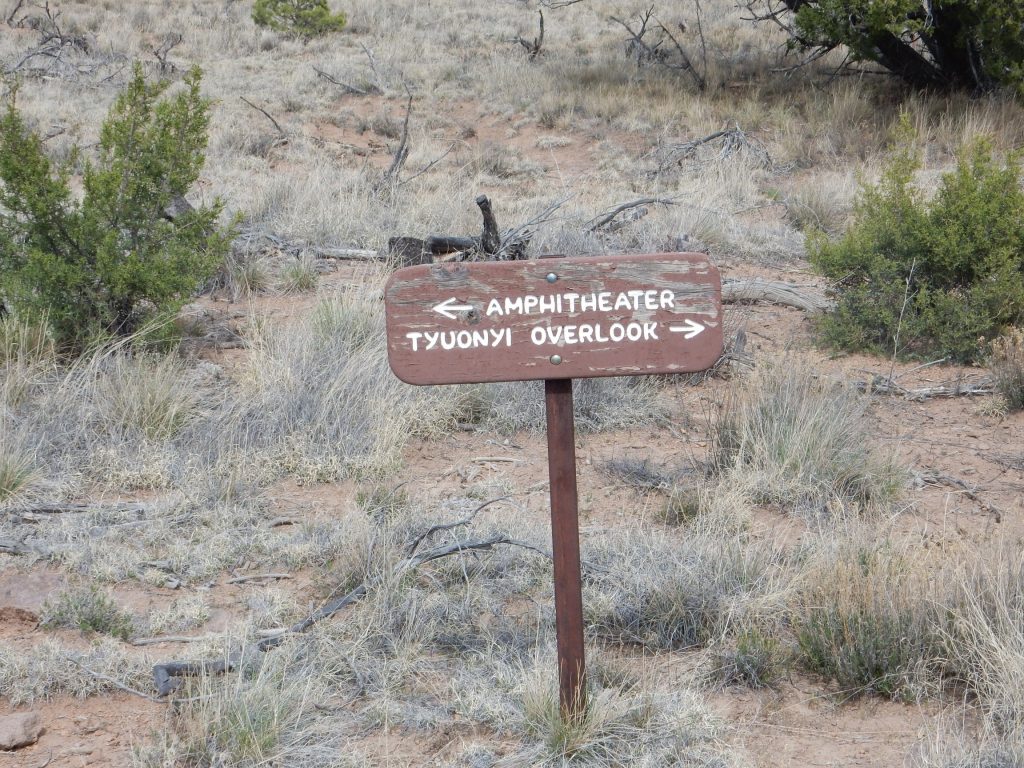 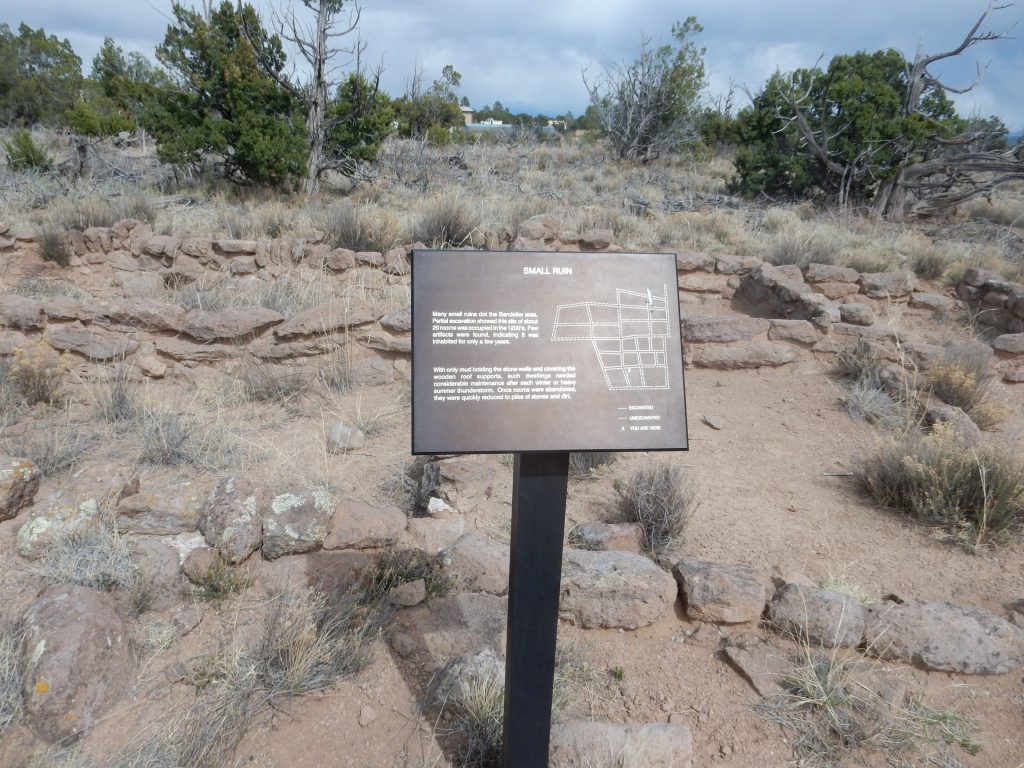 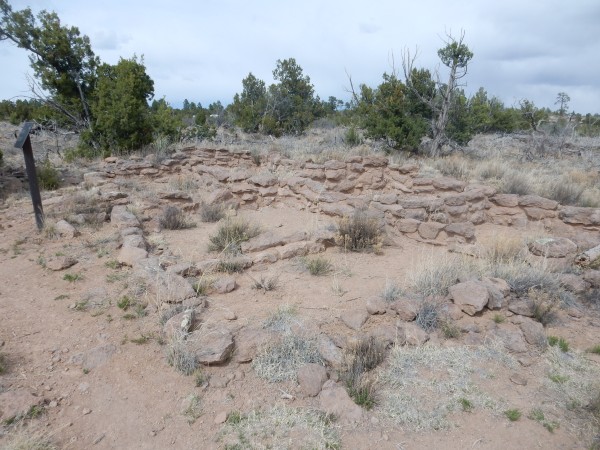 This is, as the sign says, a small settlement. The smallest settlements in the Jemez region, of which there are over 100 in the Bandelier area alone, are field houses consisting of two or three rooms. This is somewhat larger, with at least six rooms restored here and more indicated in the signage. However, it was not occupied long, as the signage notes, based on the lack of artifacts in the immediate area. Long-occupied ruins have substantial trash dumps and numerous pottery shards and abandoned tools such as arrowheads.

The restoration troubles me just a little. The original buildings were likely plastered over completely with clay rather than the sparsely cemented tuff blocks seen here. The ruins as found by archaeologists were little more than piles of blocks with perhaps some foundations stones still in place. So this partial restoration likely doesn’t correspond to anything that historically ever existed. 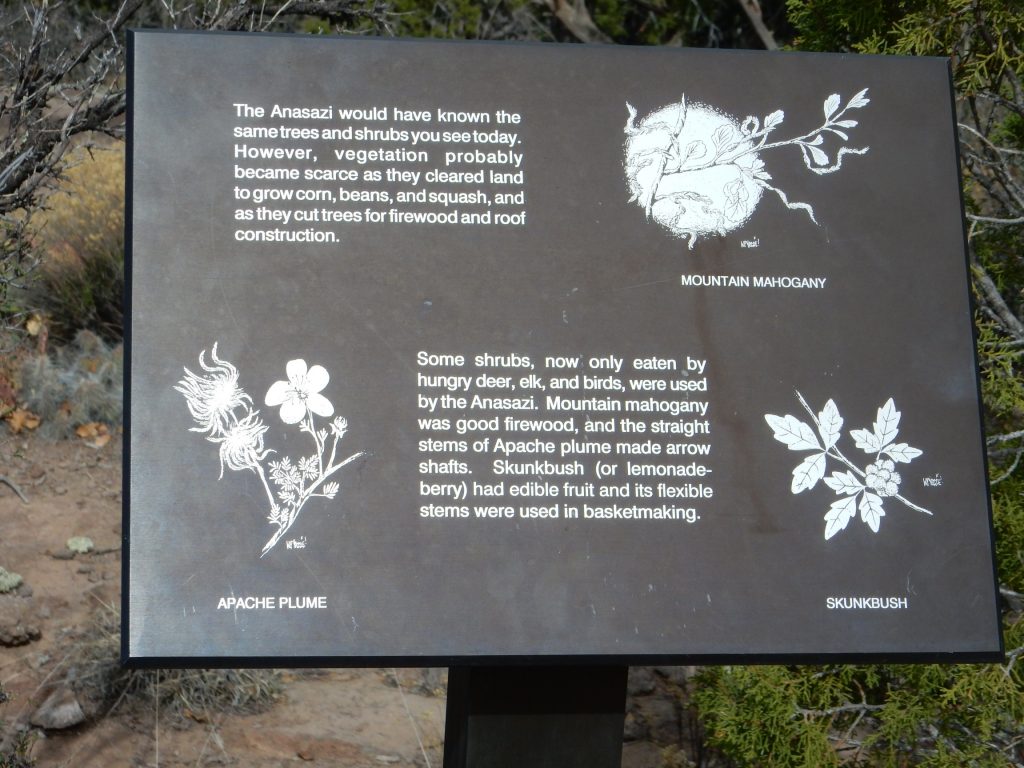 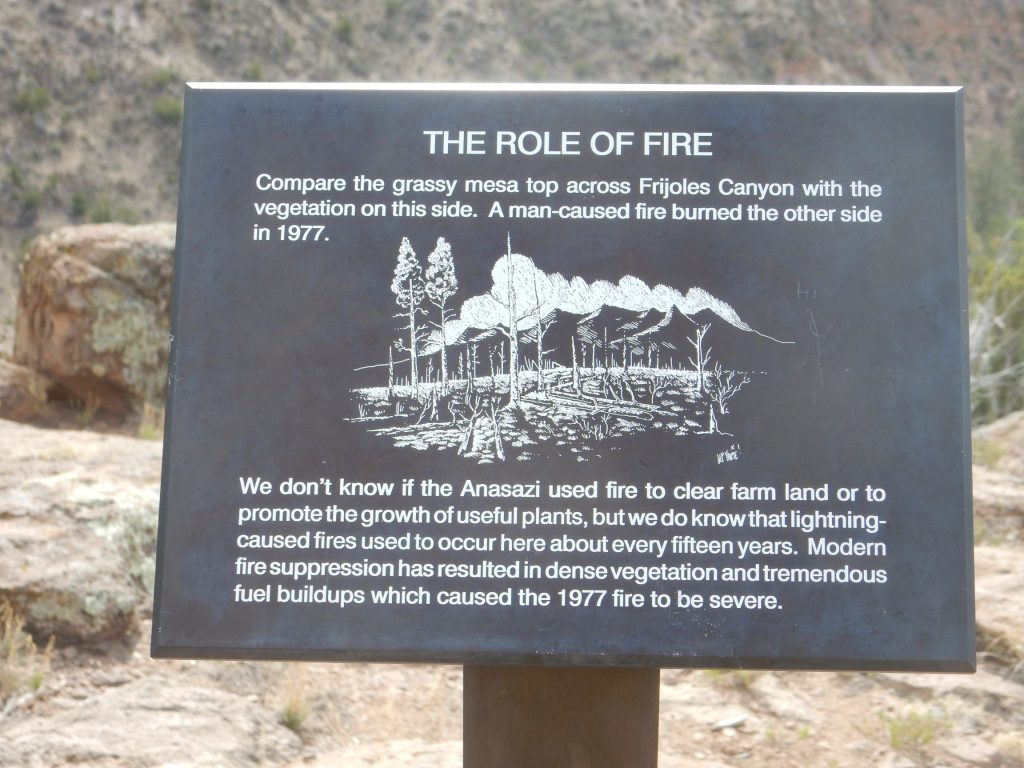 Recent fires have stripped a lot of forest cover from the Jemez area.

The trail out of the canyon into the back country of Bandelier National Monument. 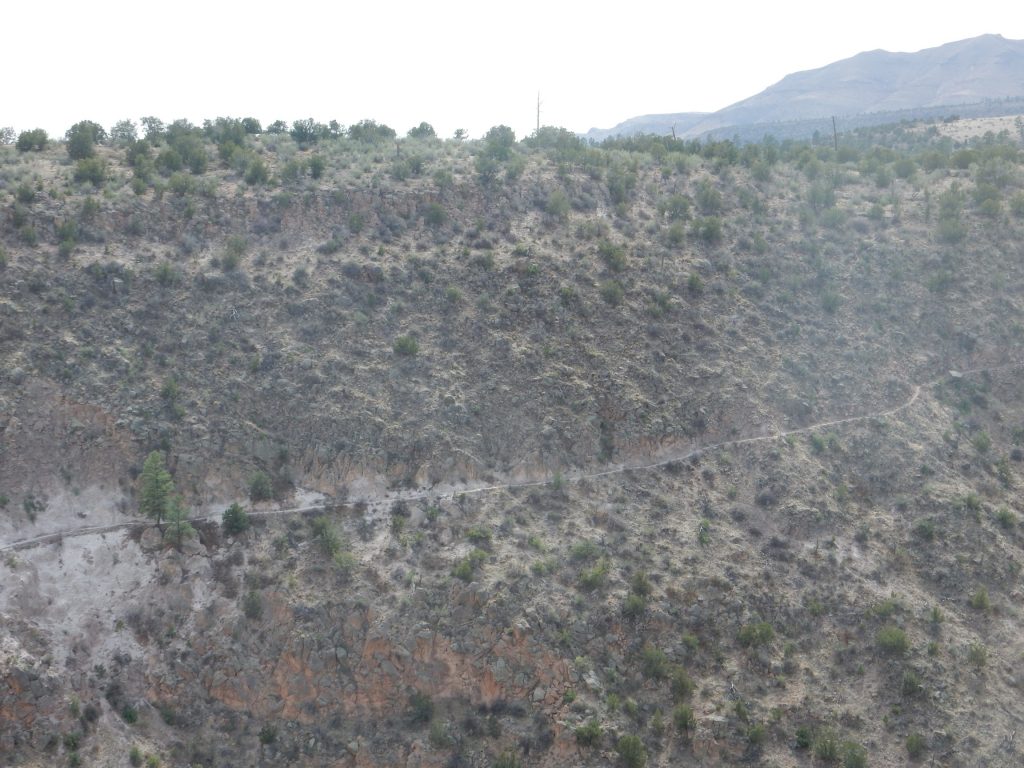 My Boy Scout leaders took me on an overnight camping trip along this trail when I was a kid. We camped near the Stone Lions shrine and returned the next day, if I’m remembering correctly. I think we actually took some mules or horses on that trip to carry our water supply; there is very little in the back country.

I’d like to hike into the back country again sometime, but perhaps I’m getting too old for that sort of thing. 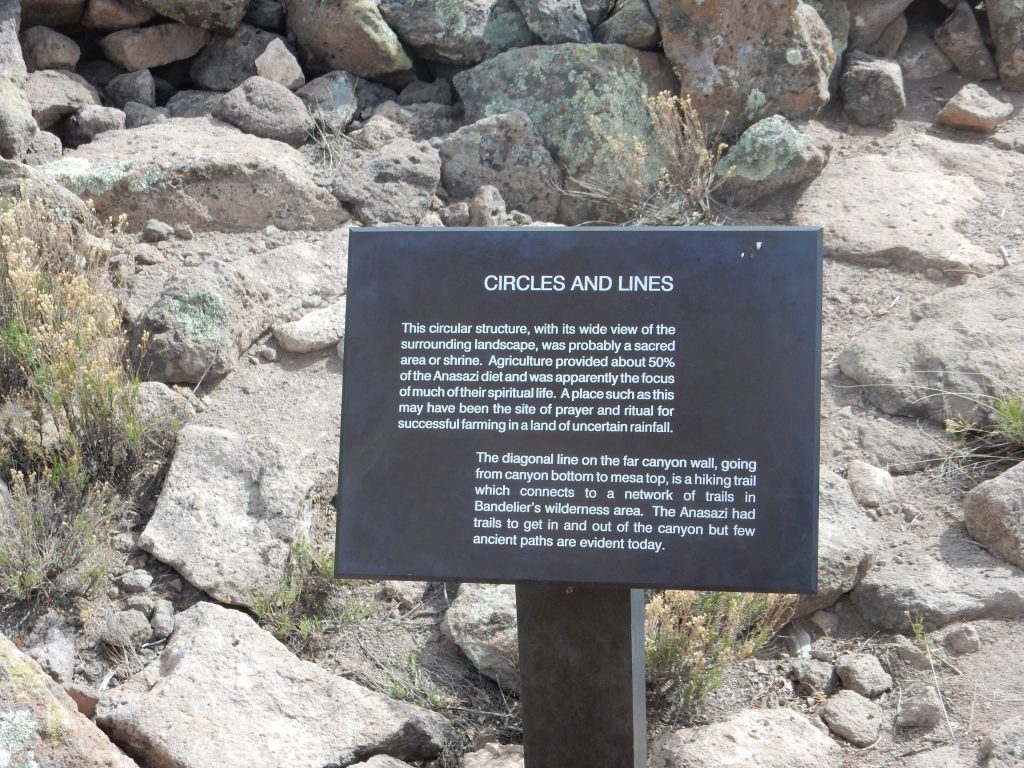 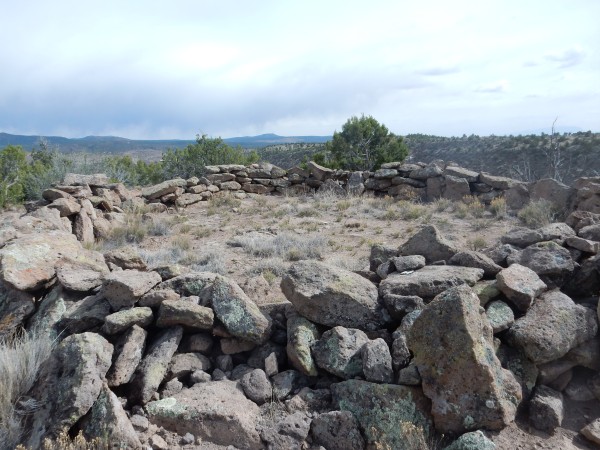 I’ve seen similar shrines at the Petroglyphs National Monument in Albuquerque. They’re assumed by archaeologists to have been used for fertility rites of some kind.

Finally, I arrive at the overlook. 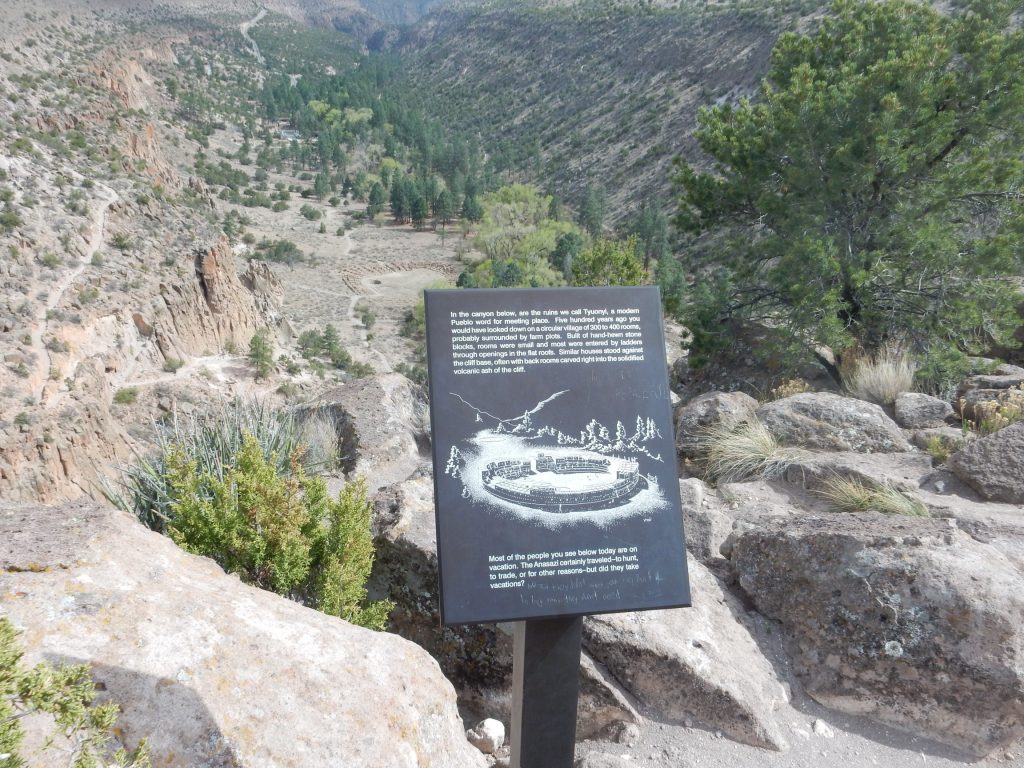 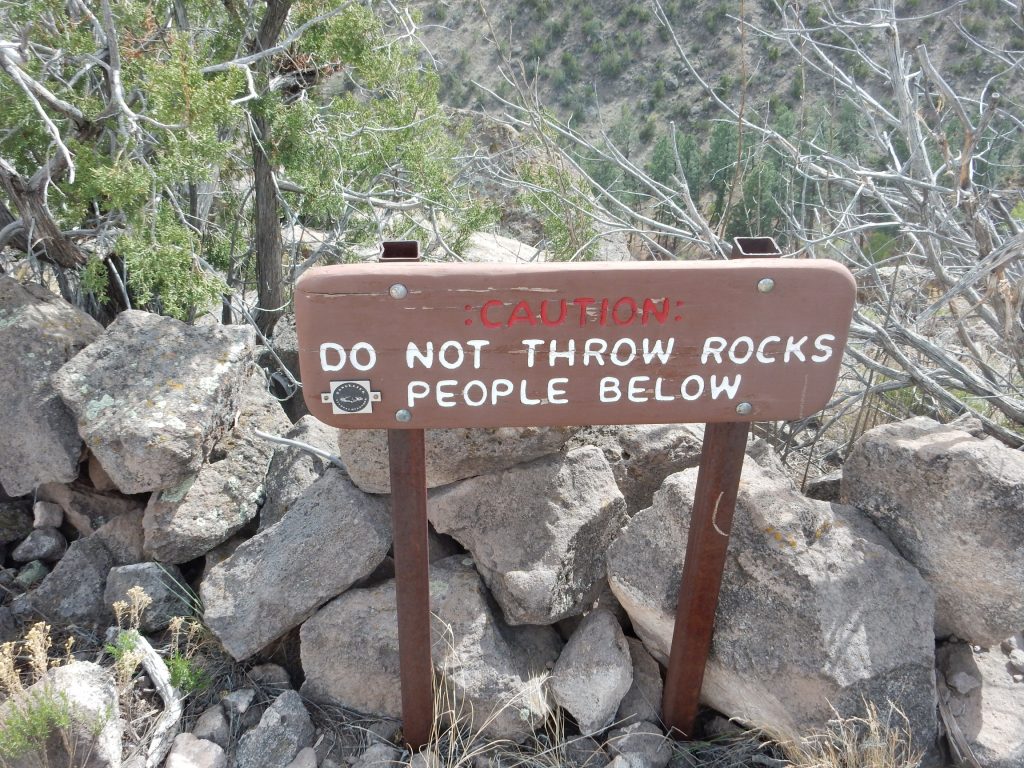 At first glance, I read this as “Do not throw rocks on people below” and wondered why anyone had to be told that.

The point of this hike was to photograph Tyuonyi ruins from an elevated position. I took several photographs to be sure I had a good one. These two came out best. 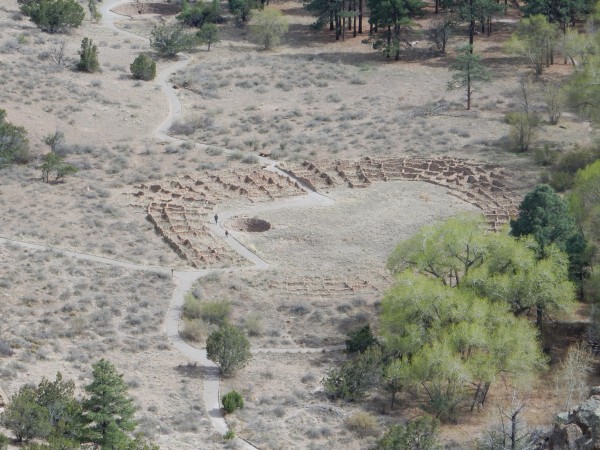 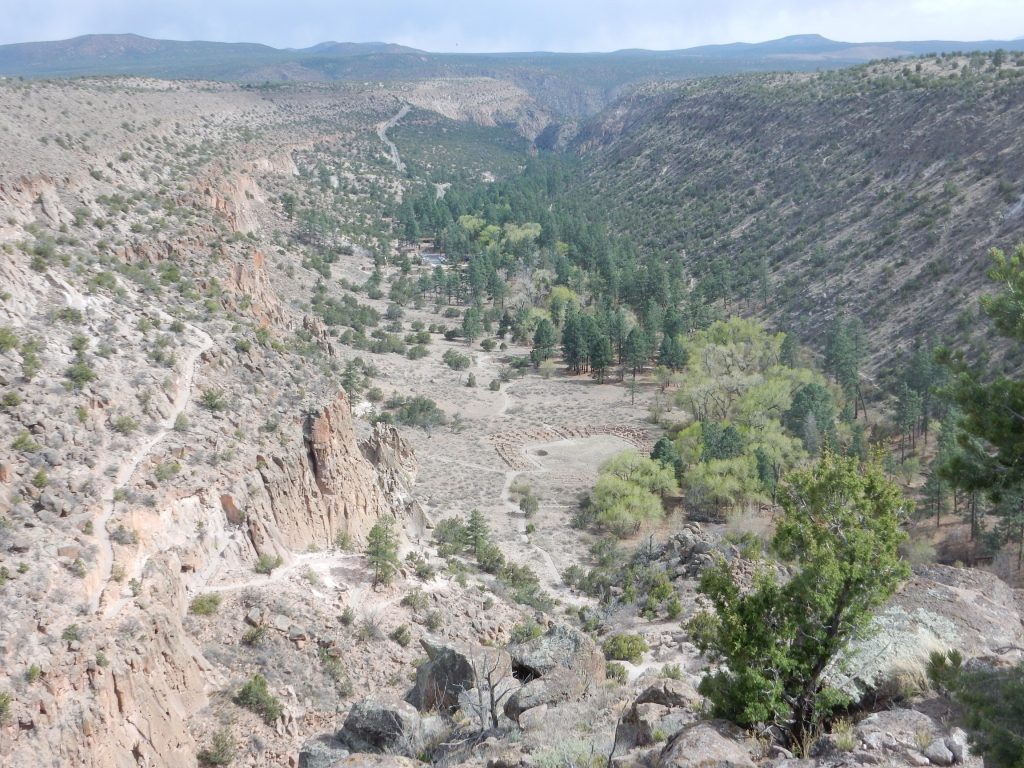 The first one is good for the book. The second nicely shows the entire lower canyon, including the Frey trail at left, the modern road in in the distance, Tyuonyi, and hte visitor’s center. However, I don’t think it will work for the book; it doesn’t show features well at book resolution.

On the way out: 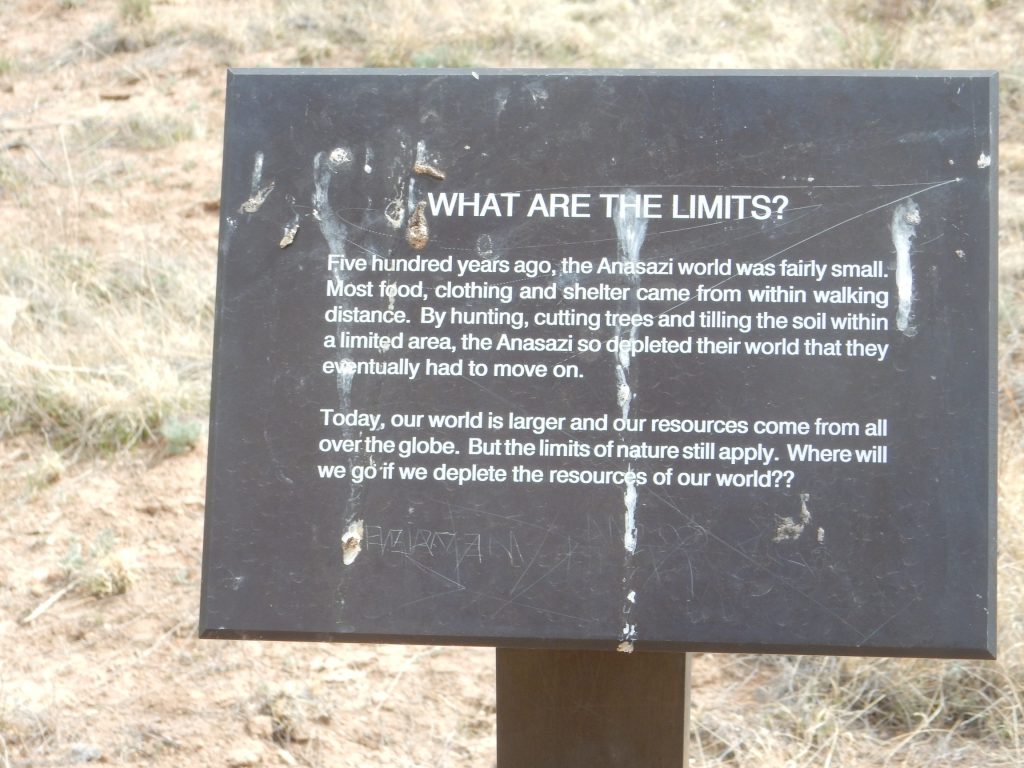 Look, I might as well admit now, at the possible cost of some readers, that the environment movement and I parted ways when I was a teenager and the environmental movement turned against nuclear power. I still consider that a deeply irrational decision on their part. And as this sign notes, the ancients were not the environmentalists they are sometimes romantically depicted as. People who are in real danger of starvation don’t have the luxury of worrying about sustainability. We do because we’re prosperous, and the truth is that modern civilization, at least in the West, is more environmentally conscious than any that preceded it.

Oh, and, yeah, the SPOT messenger worked fine, except that it didn’t seem to be transmitting my location as often as every ten minutes; more like every twenty minutes. I checked and it was set for ten. Go figure. Anyway, the emails arrived and the track was posted to my web page.

I had discovered that I needed some pots and potting soil for the cannas and some freeze protection for the regal lily, so I dropped by the local hardware store afterwards. Cindy let me know that Nathan had finally selected a color for his room, a light blue that I actually also like. I had threatened to paint it the same off-white as the living room if he didn’t pick a color. This may be why he didn’t want his room painted yet.

It did indeed freeze hard Friday night, with temperatures down to 23F. The water barrier I put around the delicate regal lily did its job successfully, and I got all the cannas planted in their pots (which will remain inside until the end of this cold snap.) It’s predicted to freeze again tonight, then a brief warm spell before another freeze Tuesday night. You know, New Mexico has a genuine summer, a genuinely nice fall, some genuine winter most years … but spring here is simply an alternation of summer and winter that plays havoc with tender buds. I get apples more years than not but peaches are a very shaky proposition, and my wisteria has only managed to have some surviving blossoms about one year in three.

Today I went with Gary Stradling to the Los Alamos Geological Society activity at the Harding mine near Dixon. It was swell, though I was a bit disappointed not to find some better specimens. The mine seems to have been pretty thoroughly picked over. I’ll write it up as soon as I can, but with the monthly LAGS meeting Tuesday night, it may take a few days.