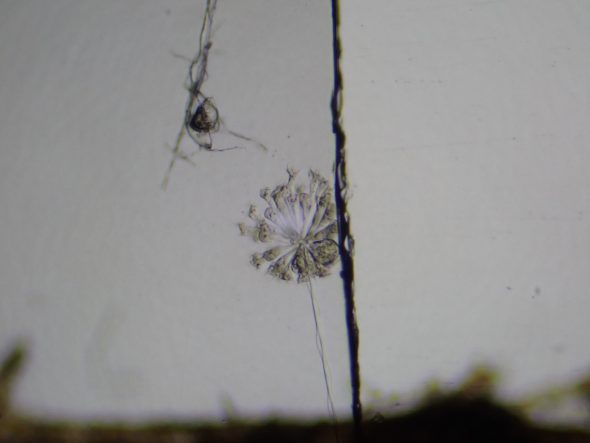 I’m going to get a little more serious now, and try to really identify the critters in the scope and say something more about them.

Today’s sample was a well decayed leaf from the aquarium. It had quite a few critters like this one.

It’s a colony of ciliates joined by their tails to a holdfast of some kind. This can apparently contract to pull the colony to safety. The best I can do on identification is that it is probably a colonial sessilid.

Ciliates are not animals in the strict modern sense. In fact, the amino acid sequences in their genes is closer to that of plants than animals. But they are not really plants, either.

This was a new one.

The critter lives in a little glass bottle of its own making, and into which it can retract. (I saw this one do this.) Those are cilia on the left. I could not find a good identification.

The waves of contraction passing down the body reminds me of a caterpillar and suggest an arthropod (insect or relative).

These guys seem too small to be arthropods.

But too large and complex to be single cells. Dunno. Here’s a single one in a movie, at higher magnification.

Some kind of ciliate, but I dunno what.

This is a cyanobacterium (“blue-green alga”) that is neither plant nor animal but far more primitive than either. It conducts photosynthesis like a plant, but slowly wiggles back and forth like an animal.

With the dark field, bright light is directed from the sides, lighting up the organisms against a black background. This only works for the lower magnifications, but you can pick out very small particles, the size of bacteria, as bright specks, almost like dust moats in a beam of sunlight.

Wish I had more precise identifications. There are a great many varieties of microscopic organisms and not many comprehensive guides, at least online.