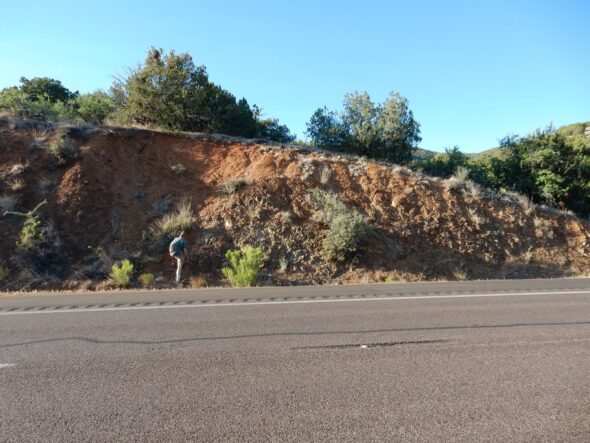 We awake and have breakfast. Gary needs some further shaking out of his vehicle, and we load up and drive in to Flagstaff. Once Gary has things squared away for the work on his Jeep, we move into the Wandermobile and head to Sunset Crater. This is the youngest crater in the San Francisco volcanic field, which is thought to have erupted in 1085 AD, based on tree ring data. In geological terms, that’s a few moments ago.

The San Francisco volcanic field itself straddles the southern border of the Colorado Plateau and first began erupting around 6 million years ago. Volcanism began to the west and has migrated east, suggesting a source in the mantle below the North America tectonic plate. Perhaps this is related to the breakup and disintegration of the subducted Farallon Plate, whose remnants are known to be present below the western United States. But it’s also about the time the Colorado Plateau began to be uplifted to its present high altitude. The San Francisco volcanic field contains numerous flows and cones, one stratovolcano, and several domes, ranging from basalt to rhyolite in their silica content.

Sunset Crater is a basalt cinder cone. Such cones tend to erupt only a few time before becoming extinct, and they tend to be associated with lava flows that emerge from the base of the cone. Bonita Flow emerges from the west base of Sunset Crater.

A a’a flow is a lava flow characterized by a crust of rough, jagged, broken rock. It is in contrast to pahoehoe flows, which have a smooth, ropy upper surface. The difference is mostly one of temperature and possibly gas content, with pahoehoe flows sometimes transforming to a’a flows as they move away from the vent, cooling and losing gas content, but the reverse being almost unknown.

As with almost all images at this site, you may click to get a higher-resolution version.

There is a short trail permitting a closer view of the features. A’a lava surface:

I attempt a close-up shot of the lava.

Too much depth of field. But this seems to be a pretty typical olivine basalt.

TL;DR: The lava came from Sunset Crater and pooled in a shallow valley. There were at least three pulses of eruptions.

The trail to the top of Sunset Crater was also recently closed because of its environmental impact. That seems a shame, though I can’t blame the Park Service for trying to be good stewards.

We drive down to a lookout point for Sunset Crater.

The eruptions at Sunset Crater began as a “curtain of fire”, lava ejected from a fissure extending six miles to the southwest of Sunset Crater. Basalt lave is relatively low in viscosity and dissolved gas, but the gas coming out of solution can still throw the lava hundreds of feet into the air, where it cools and comes down as solid cinder. Some of the erupted lava can be seen as reddish deposits on the hills to the south. Curtains of fire are unstable; the eruption tends to localize at a few vents, then at a single vent, which in this case was Sunset Crater. We see this same pattern in modern eruptions at Hawai’i.

Time to go pick up the Jeep. On the way, I stop for a photo of the Arena of Humphreys Peak.

Humphreys Peak is the stratovolcano at the heart of the San Francisco field. Stratovolcanoes are the kind of volcano most people think of when they hear “volcano”, and include the Cascade volcanoes and Mount Fuji. They form from alternating eruptions of lava and cinder that build a stratified cone. We now also know that such volcanoes are subject to catastrophic rock avalanches, such as at Mount St. Helens. The bowl-shaped valley in the middle of Humphreys Peak may be an example of a similar collapse feature.

We pick up Gary’s Jeep and discover a Himalayan restaurant next to Northern Arizona University in Flagstaff. (Where my niece, Beth, has been accepted for graduate studies in anthropology — congratulations again, Beth!) Himalayan food can be quite good and our lunch is excellent. I just have to be careful about the carbohydrates. We then head south, racing daylight again, to get to Payson in time for some geologic exploration while we have light.

This caught my eye.

A basalt flow, part of the 4 to 8 million year old volcanism south of Flagstaff, along the southern margin of the Colorado Plateau. The Plateau is thought to have been uplifted starting 6 million years ago; the timing does seem to match.

Payson sits just south of the Mogollon Rim, regarded as the topographic southern boundary of the Colorado Plateau. My geologic map is not very detailed, but this is very likely an exposure of the Great Unconformity, the gap in the geologic record at the end of the Proterozoic that is widespread in western North America and many other parts of the world. The Great Unconformity may be a result of the Varangian glaciation stripping off the sedimentary cover in many locations. If I’m right, the rock at the base of the cut is Proterozoic granite and the beds above are Cambrian sandstone beds, probably of the Tapeats Sandstone. Which we prudently did not hike all the way down to see in Grand Canyon.

We find our campsite. The ranger hostess tells us she will be down shortly for the bear lecture. I start to chuckle and she gives me a very stern grandmotherly look. “Don’t laugh.” Well, it’s not like that; I had a tent ruined two years ago by a hungry racoon, and I am very ursine-aware. We find our spot, lock our ice boxes in the bear box, and get set up. The camp is next to a hill of Precambrian quartzite.

The area south of the Mogollon Rim has many exposures of ancient rock such as this, which is probably around 1.6 billion years old.

We race back west to see the ophiolite before light fails. We only just make it.

The light is simply too low to do this justice; but if I do in fact retire to Prescott Valley in six years, I’ll be in a good position to come here again. The beds here have been identified as a highly metamorphosed sheeted dike complex, part of an ophiolite, a chunk of oceanic crust that got trapped in the continental crust and preserved. Most are thought to form in relatively small oceanic basins called back-arc basins that form above a subducting slab. In this case, the ophiolite was emplaced about 1.6 billion years ago.

The rock was once basalt; it’s now amphibolite, with numerous veins of green serpentine that were originally veins of dunite, a rock composed almost entirely of olivine and characteristic of oceanic crust. We get some nice samples, then start back to camp.

Here’s a sample of amphibolite bearing a vein of serpentine.

And here’s a sample of the basalt that is a bit less altered.

“Less altered” being relative; it hasn’t recrystallized to coarse-grained rock, but it shows definite greenish color from alteration of mica minerals.

The last of the light lets us examine another outcrop.

The rock is a very pretty gabbro, a coarse-grained rock with the composition of basalt that is also typical of ophiolites. The pink rock is intrusions of granite, probably significantly younger in age. (My wild guess is 1.4 billion years, because there was a pulse of granite intrusions throughout the Southwest at about that time.)

To be sure, I don’t know that this is a gabbro. That would require identifying which kind of feldspar is present. But the abundance of dark iron minerals suggests a gabbro.

Then back to camp. We never get the bear lecture; when the ranger sees that we’ve put our ice boxes in the bear boxes, she figures we already know the drill. It’s a nice campground. There seems to be more room per site than any other campground we’ve been to this trip.