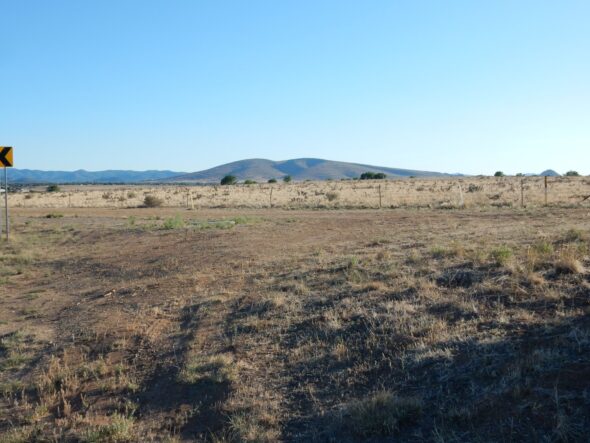 Gary will get it.

I awake early and, anticipating that we may not do much walking today, I walk out to the highway and south. Plus it’s quite chilly and I want some warming sunshine. There is a historical marker along the highway explaining that Dairy Springs was indeed a milk dairy at one time. The rock here is young basalt, part of a belt of Cenozoic volcanism across Arizona that coincides with the southern boundary of the Colorado Plateau.

I walk back to camp and Gary is up. We breakfast, and then head south towards Payson in Gary’s Jeep. The plan is to detour west through some possible fossil sites and see the Prescott Valley area. Cindy and I are planning to retire in six years, when I hit 65, and she has picked out Prescott Valley as a possible retirement community. I’m to check the area out and report.

Our first stop is at an outcrop of what looks a lot like limestone.

The geologic map says this area has gray to cherty tan limestone of the Kaibab and Toroweap Formations. I’m guessing that’s what this is, though it looks just a little like a tuff. (But none is mapped in this area.) We look for a while but find no clear evidence of fossils.

Next is a road cut.

It’s mostly limestone, so I’m guessing Kaibab rather than Toroweap. There are some striking veins and pods of coarse calcite crystals; since this is a road cut on Forest Service land, I take a yard rock.

Yes, two sides of the same rock. It’s remotely possible the big crystals are something other than common calcite, but the rhombohedral shape makes calcite by far the most likely identification.

Some striking calcite crystals in the limestone.

This I did not try to extract to take with me. The crystals are regular enough that I wonder if they are very poorly preserved fossils, or crystallized around the same.

Lots of dirty limestone and shale; this could be either Kaibab or Toroweap Formation. What’s striking to me is the layers of dirty limestone separated by what appears to be paleosols — fossil soils — in several cycles. This suggests the periodic advance and retreat of the ocean from the Permian Kaibab continental shelf during the late Paleozoic ice age, which is known to have been cyclical, just as our present ice age is. (We’re living in an interglacial. It remains to be seen whether current global warming will break the cycle and prevent a future glaciation.)

This puzzled me for a few moments.

It has to be the drill holes where explosives were set to blast out this road cut. I’ve just not seen a drill hole with this peculiar shape before.

There are some very convincing burrow casts, but this is the closest we find to body fossils.

We drive into Strawberry and eat lunch. The road west takes us to an area called Fossil Creek, which sounds promising, doesn’t it? Alas, the road is gated and locked, here — and apparently this is semipermanent. We are compelled to turn around.

We drive on to Pine, where I mistakenly thought there was a junction and a road to Prescott Valley. We stop at a gift shop with a sno-cone trailer out front — here, I think. Gary gets a sno-cone; I get directions, which are that we’ve come too far and the highway we were looking for is back north. We head there, head west, and pass through some interesting country, but Gary is letting me take a shift driving and I decide to defer photographing outcrops until the return leg. We pass through Camp Verde, but Gary is still breaking in his new Jeep, and we end up spending a couple of hours in the area shaking some things down. My camera is acting up, too; I didn’t take many photos and none came out focused right anyway.

Then north and west to Jerome, an old mining town with wonderfully winding roads up the side of the mountain. Here we get a nice view to the northeast.

The red cliffs are Supai Group and Hermit Shale capped with Coconino Sandstone — our old friends from the Grand Canyon. We are looking northeast into the Sedona area.

We are at a limestone outcrop, but my map is vague on which limestone. Redwall Limestone, possibly. We hunt for fossils.

But it seems to be a massive, almost featureless limestone of pure micritic mud.

Micritic mud is mud formed almost entirely of microscopic needles of calcite. Since there is no doubt of what kind of rock this is, I calibrate the acid drop bottle acquired earlier in the trip against the outcrop. (Foams like crazy.) Earlier I had dropped some acid on what turned out to be dolomite, and it bubbled lazily. Now I know the difference.

There is a cave.

I am not inclined to go spelunking, particularly as it is late in the day. And there are reputedly fossils along this road, if you can find the right spot. We never do; the next spot we stop at turns out to be basalt, not limestone, which the map says is 8 to 16 million years old. There are promising outcrops further down canyon, but no really good place to pull over to check them out, and we are now positively in a rush to get to Prescott Valley so I can take photos while we still have daylight.

Cindy had taken the time to look up the geology of the area, and on one of our phone conversations, she described it in some detail. (I found this touching and thoughtful; she’s not really a geology fan.) This, for example, is an area of recent volcanism that apparently has some nice hiking trails.

And some promising looking beds to the northwest.

However, there is no time to explore the geology, let alone hike any of it, and the most we can do is find an Italian restaurant in town and have an excellent dinner. My general impression: It’s a clean town; we saw no run-down areas; there are evidently a lot of retired military in town, and some medium-tech light industry. Yes, I think I could consider retiring here.

And, at the restaurant, I discover that diet Pepsi is marginally less awful-tasting than diet Coca-Cola. I only started drinking caffeinated beverages in the last year, on doctor’s instructions, because I have started leaking brain coolant. This causes mild but very persistent headaches and some slight disturbances of vision and senses of smell and taste, and caffeine helps considerably.

Getting back to Dairy Springs in the dark proves to be an adventure. Gary’s digital advisor is giving us our route, and she steers us onto a really dreadful gravel road. We back up, find a different route — and once again she steers us onto a slightly less dreadful gravel road. The map seems to show that the gravel section is short; in fact, we find it goes on for many miles. I am white-knuckled most of the last part of it. But we manage to get to the camp more or less intact, and settle in for the night.