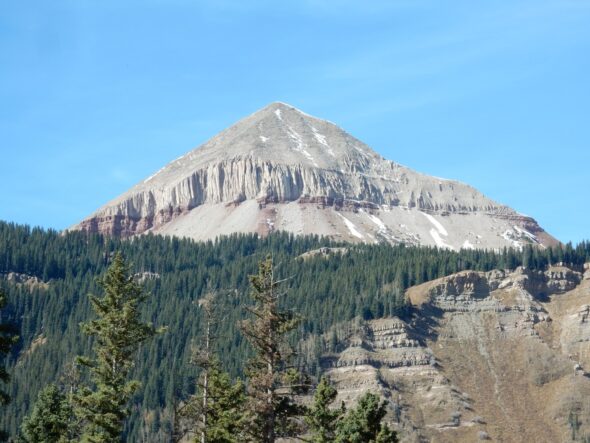 We awake to a frigid morning. However, we had slept well, in spite of the cold, and in spite of a camper not far away leaving his radio on all night. We make breakfast, dry my tent, and break camp.

First stop: Tomichi Point. Alas, the sun is very low and nearly into my camera.

More shots, tryhing to avoid too much sun in the lens.

Notice how very level the rim of the canyon is. I’ll explain momentarily.

Zoom shots east along the canyon.

Final shot of the south rim, trying to avoid the worst of the sun.

We drive up to the visitor center, which is mostly closed. The volunteer at the door tells us a little about the geology of the area. Park Service volunteers are uneven, which is probably unavoidable, but on average they’re reasonably impressive. This one explains that the area began as a Precambrian peneplain on which a thick sequence of Cretaceous sediments and early Cenozoic volcanic beds were deposited.

A peneplain is a very level surface produced by prolonged erosion nearly to sea level. Much of the world was reduced to near-peneplain topography in the late Precambrian, perhaps as a result of the “Snowball Earth” glaciation. We have evidence that our home stomping grounds near the Jemez were likewise reduced to a peneplain.

The Black Canyon area was moderately uplifted as part of the Ancestral Rocky Mountains (being located between the Ancestral Front Range and the Ancestral Uncompahgre Uplift) and again beveled flat, finally being buried again in the mid-Jurassic and continuing to accumulate sediments until around 15 million years ago. At this point the Gunnison River first integrated its course through the area.

Around 2 to 3 million years ago — a blink of an eye geologically — this area was again uplifted. The Gunnison had a steep enough gradient that it rapidly cut down, rather than shifting course off the uplifted block. The result is that the Black Canyon cuts through a fairly flat plateau standing above much of the surrounding plain, with virtually no tributaries draining into the Black Canyon.

This explains most of the features of the canyon. The very flat rim is the peneplain beveled out of the hard Precambrian rock. The very steep walls reflect the rapid downcutting, much faster than the Grand Canyon, and the lack of any tributaries. The remaining distinctive feature, the jagged canyon walls with their striking jointing, is a result of regional compression clear back in the Precambrian, 1.6 billion years ago and again 1.4 billion years ago, that produced strong foliation in the rock.

Okay, the volunteer didn’t tell us all that. He told us the basics, and I’ve filled in the details.

The bookstore is open. I see a couple of books Gary really ought to have and persuade him to buy them. One is a history of the Colorado Plateau with excellent reconstructions of its geography at different points in the distant past. The other is a Gary Larson book (yes, the Far Side guy) that casts its hairy eyeball on the more sentimental and less realistic forms of environmentalism. Don’t misunderstand; it’s a pro-environmentalism book, mostly. But it skewers the “charismatic fauna” fallacy.

We walk down to the south rim lookout point.

The hills in the background are erosional remnants of the Jurassic to Tertiary sediments and flows that were deposited on the hard Precambrian peneplain. The canyon wall here is various kinds of gneiss, with ages around 1700 million years. The rock at left is migmatitic gneiss, 1730 million years old and highly metamorphosed. It’s a paragneiss, meaning the geologists who mapped it interpreted it as sedimentary rock that was altered by heat and pressure following deep burial.

The agent of all this erosion.

The Gunnison River. We were told by the volunteer that it is possible to traverse the canyon by kayak, with occasional portage. Would be spectacular.

The view to the west.

We drive down the rim to the next lookout point, The Fissures.

There are some impressive deep fissures here.

We are told there are a number of routes worked out into the canyon, none requiring more than scrambling and a strong physique. We both conclude we’re too old now for that kind of thing.

Looking down to river level.

The rock in this direction is mostly the Vernal Mesa Quartz Monzonite: 43 percent plagioclase feldspar, 22 percent alkali feldspar, and 15 percent quartz. More quartz would make it a monzogranite; less, a monzonite. More alkali feldspar would make it a quartz syenite, and less a quartz diorite. Why, yes. Geologist actually care about these things; they’re clues to the origin of the rock.

Notice again how remarkably level the canyon rim is.

At left is the east end of the Painted Wall. We’ll see more momentarily.

We drive to the Painted Wall View and start down the short trail. A glimpse down the canyon to the west:

The rock down canyon is mostly more of the migmatitic gneiss.

This is the Painted Wall, the highest cliff in Colorado at about 2250 feet. It’s migmatitic gneiss, like so much of the canyon, with thick dikes of pegmatite (very coarse, very alkaline granite) crossing the cliff.

This is a good place to see the very level upper rim with a layer of Jurassic Entrada Sandstone erosional remnants.

We’re out of time; we have a seven-hour drive ahead of us. But we got a pretty good look at most of the best parts of the canyon.

We head south towards Silverton. I take several pictures of the San Juan Mountains on the skyline; not one comes out focused properly. But we come around a bend and I get a second chance.

The San Juan Mountains are an area in which the Earth’s crust has been domed up over a very sizable area, almost 100 miles across, by rising hot mantle rock. This likely originated from the Farallon Plate, which subducted under the western edge of North America from about 80 million to 35 million years ago. The plate subducted at an unusually shallow angle, then disintegrated and sank into the mantle, allowing hot mantle rock to rise in its place. This also resulted in a wave of volcanism, the Mid-Tertiary Ignimbrite Flareup, which resulted in numerous ginormous caldera eruptions in the San Juan uplift and in other locations across the American West.

The hills in the middle distance are Jurassic to Cretaceous beds — Morrison Formation, Dakota Formation, and Mancos Shale. The contacts cannot be easily made out here.

Deep zoom on the mountains.

The upper layers here are mapped on my geological map as the San Juan Tuff. It’s a very old map; I expect the flows would be divided into numerous individual tuff units representing individual caldera eruptions on a more modern map.

Turning around and looking at the cliff behind us:

I don’t have a detailed geologic map of this immediate area. Extrapolating from nearby quadrangles, this must be Morrison Formation. The fact it’s most sandstone suggests Salt Wash Member. Jurassic in age.

And the canyon to the west.

This is on a map and it’s Dakota Formation over Morrison Formation.

Yet further south, we come to the type section of the Cutler Formation.

The Cutler Formation, like the Fountain Formation and Sangre de Cristo Formation from earlier in the week, the Maroon Formation north of our explations this trip, and the Abo Formation back home, is red bed sediments eroded off the Ancestral Rocky Mountains around 300 million years ago.

We are looking at part of the ginormous resurgent dome of the Silverton caldera — a thick stack of intracaldera tuff. Alas, I don’t have a detailed geologic map of this precise area.

We pass through Ouray. The beds to the northwest catch our eyes.

I believe this is Hermosa Formation, limestone beds of Pennsylvanian age.

We come to a pullout that is ideal for taking in the area.

There’s a very clear distinction between sedimentary beds at left and thick ash beds at right on the skyline. All my geologic map says is that this is San Juan Tuff. This is just outside the Silverton caldera, so this is a very thick ouflow sheet (or perhaps more than one.)

Panorama across the town.

On both sides of the valley, you see thick limestone beds of the Hermosa Formation overlain by thin beds of Jurassic and Cretaceous formations forming a slope or shelf. On top of these is San Juan Tuff. The yellowish patches at center are mine tailings, where mines have exploited zinc-lead ores deposited by granodiorite porphyry that intruded the Cretaceous beds. Granodiorite is an intrusive rock rich in plagioclase and quartz; porphry means it has big crystals (phenocrysts) in a finer-grained groundmass. The map says the phenocrysts are andesine (a form of plagioclase), hornblende, biotite, and quartz, and are up to a centimeter across.

This is Umcompahgre Formation slate beds. This is mudstone laid down perhaps 1705 million years ago in a large basin on what was then the south coast of North America — perhaps the same basin in which the Hondo Group was laid down in the Picuris Mountains back home.

The highway here roughly follows the northwest edge of the Silverton caldera. Red Mountain is within the caldera and was hydrothermally altered to give it the red color. There are a number of mines on its flanks.

Silverton itself is on the south edge of the Silverton Caldera. We drive briefly through town. It appears the town is mostly based on tourism now.

To the southwest, Engineer Mountain:

We’ll get additional close looks later. The pass here (Molas Pass) cuts through Rico and Hermosa Formation limestone beds; reputedly good for fossil hunting, but we have no time for that today.

This catches my eye:

I wish I had got more of the road cut to the right, but we were on a tight schedule at this point. The beds at left are sedimentary beds likely of the Rico Formation. The road cut to the east was crystalline rock, and I figure there must be a fault in the area to the right in the picture. No, it’s an intrusion margin; the crystalline rock was a plug of igneous rock intruded into the sedimentary beds.

The sign informs us that we are at 10,000 feet. That’s a long way that these former marine limestone beds have been thrust up.

Thick beds of Rico and Hermosa Formation limestone and shale.

Further down the road, more scenery comes into view.

The lower red rocks, mostly covered in talus, are Cutler Group sedimentary beds. The rock above this is mapped as Tertiary intrusions. The gray columnar layer looks very much like a sill to me — a body of magma that intruded between sedimentary beds.

We descent into Hermosa, namesake of the Hermosa Formation. Here’s a nice type area photograph of the latter.

The precise type section is just across a canyon to the north. Wish I had known. Still, this is in spitting distance.

We stop in Durango for lunch. I have a full meatball sub from Subway; not healthy but a real favorite for me. Well, I’m on vacation. The girl behind the counter, who cannot be much over 20, addresses me as “Darling.” A cheerful eccentricity. From there we make an uneventful drive home, over mostly familiar country; so that’s the last of my photographs.

Got in a little after dark. To my surprise, Spartacus, my daughter’s cat, was the most visibly pleased to see me. Squeakums also realized I was home after a while and begged for a treat. Stupid the Cat? She seemed to take several minutes to realize who I was — then she was ecstatic to see me. Well, cats.