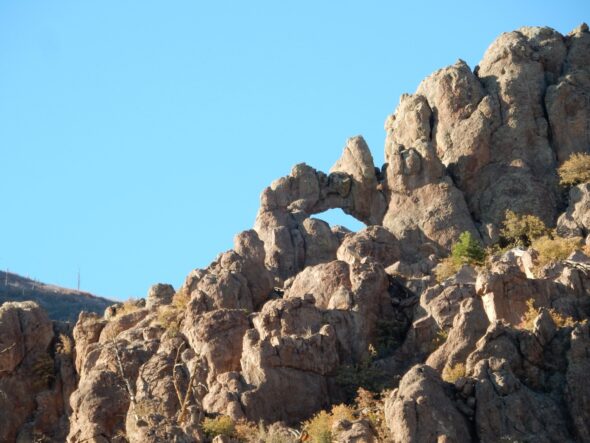 It’s been eight years since I hiked the Mitchell Trail, and called it a wanderlust for the first time. I had a few errands at the office last Saturday (the bugs are ever with us) and, once I was as finished as I was going to get, I headed over that way for some exercise.

Normally this time of year isn’t great for photogeohiking, because the sun is too low for the light to be good. So I pretty much take a break until my Kent Is No Longer 29 hike at the end of March. But it turned out to be just right for this area.

Approaching the trailhead, a knob on Guaje Ridge is perfectly framed.

To the west is Mount Los Alamos.

Mount Los Alamos once had a fairly well-maintained logo for Los Alamos High School painted on it. Alas, the mountain is on Forest Service land, and when I was still young, a new Forest Service supervisor was assigned to the area who declared the mountain off-limits for painted logos. The logo is now nearly invisible.

Guaje Ridge and Mount Los Alamos are both underlain by the Tschicoma Formation, as is the entire skyline west and north of Los Alamos. This is a great stack of domes and flows of most dacite. Dacite is a kind of volcanic rock that is quite high in silica but relatively low in alkali metal oxides. Dacitic lava is extremely viscous; it flows about as well as Silly Putty. When this lava comes up from a vent, it cannot easily flow away. Instead, it piles up over the vent until the mass becomes large enough to begin sluggishly moving as flows hundreds of feet thick.

The Tschicoma Formation has been studied fairly thoroughly in recent years, and geologists have discovered that it was erupted in two main pulses. Guaje Ridge is part of the older pulse, which took place close to 5 million years ago. That’s long enough that the flows of this pulse, the Rendija Canyon Member, are fairly deeply eroded. The younger pulse, which began about 3 million years ago, is less eroded, and its domes and flows really do look like they’re draped over the older flows.

Mount Los Alamos has never been dated, but it is mapped as Rendija Canyon Member. However, it looks suspiciously young, and some geologists have suggested it is a younger dome. Only radiometric dating would tell us for sure.

Looking northwest along the trail.

I have only an hour to spend on the trail, so I will end up spending my entire hike on the bench of Tsherige Member, Bandelier Tuff, that fills upper Rendija Canyon. The Mitchell Trail eventually climbs above the bench and onto the Tschicoma Formation, but I won’t have time to hike that far today.

Long-time readers will be very familiar with the Bandelier Tuff. For new readers (Welcome!): The Bandelier Tuff was deposited by a series of ginormous caldera eruptions in the central Jemez Mountains. The latest of these was the Valles event, 1.25 million years ago, which produced the Valles caldera. A magma chamber full of very viscous, gas-rich magma broke through to the surface, and the magma basically disintegrated into red-hot gas and shards of volcanic glass. This hot mixture was heavier than air, and flowed for miles in all direction, laying down beds of tuff. The Tsherige Member is the tuff deposited by the Valles event; earlier caldera eruptions laid down older members of the Bandelier Tuff, such as the Otowi Member, deposited 1.62 million years ago.

Contrast this with a boulder of Tschicoma Formation washed down from the slopes up canyon.

Looking up the trail at the Tsherige Member bench.

Fork. Left is the Perimeter Trail; right is the Mitchell Trail. The trail cuts deep into the Tsherige Member, which is quite soft here.

Ahead are spectacular eroded ridges of the Rendija Canyon Member of the Tschicoma Formation.

The trail takes me around the shoulder to the right.

The trail crosses a shallow arroyo, still choked with fallen wood from the 2011 forest fire.

My children were still young at the time, and I think it was a bit traumatic for them to be bundled into the car with a few possessions as we evacuated. Worse still was that there was nighttime road construction on the interstate to Albuquerque, where we would be staying with family. So we sat at a construction stop for several minutes with the fire clearly visible raging across the mesas to the north.

Looking back down the canyon.

(For new visitors: As with most images at this site, you can click the image for a higher-resolution version. This is particularly recommended for panoramas.)

And we do see the disadvantage of low-angle sunlight here. The cliff to the left is badly washed out. Still, most of the rest of the hike yielded better photos than I expected, mostly because the best views were to the north and perpendicular to the sun direction.

The ridge here, Guaje Ridge, is a single long flow of dacite from a vent somewhere to the west. The vent area is badly enough eroded that its identification is uncertain. The steep ridge reflects how viscous the dacitic lava was.

Closer look at the rough area to left.

You can just make out the Guaje Window at the top of the ridge at left, where it is most rugged. My telephoto fortunately makes it easier:

This is a favorite destination for hikers. I am not going to attempt it today; it requires scrambling, and the last time I visited, I wrenched my knee rather badly. It’s never been quite the same since.(But then I’m eight years older now.)

I hike on to where I’m looking almost straight down the rough section.

I hear voices. It turns out there are at least two groups working their way up to the Guaje Window this afternoon.

Looking back down canyon.

I didn’t have a lot of time for hiking this day, and it’s now half gone. But two final photos:

This outcrop is a little different from the others we’ve seen today, because of its horizontal bedding. It stands out in the satellite photo as well. However, the geologic map does not flag it as anything unusual.

I only made it a short distance up the Mitchell Trail in the time I had available. How long is the Mitchell Trail? Pretty much as long as you want it to be. It goes for miles into the mountains,then joins other trials that go further miles. I really should set aside an entire day, in good weather, to explore it properly. That may not be until next spring, though. It’s been a warm, mostly dry fall, but the first snows could come any day now.