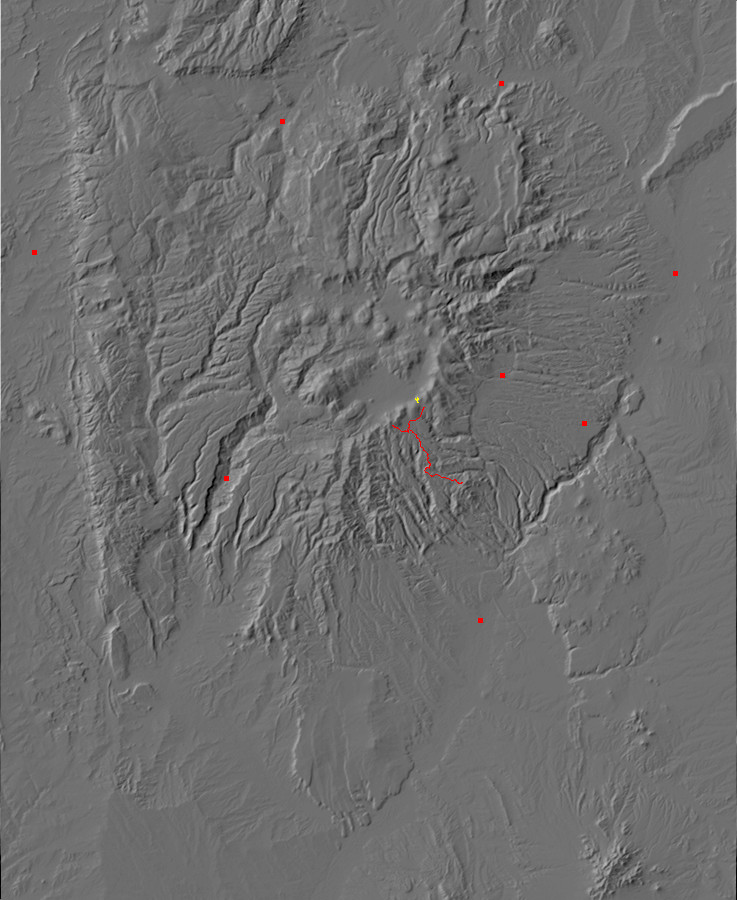 I tried to do too much on my road trip today and ended up not doing any of it as well as I would like. 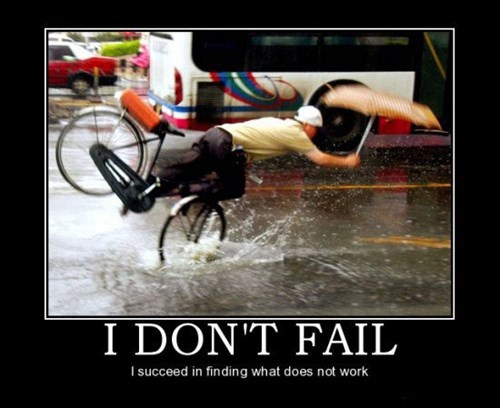 So I set out to do three things: Hike the Valles Caldera trail; hike from Graduation Flats to the top of Rabbit Mountain; and drive out to St. Peter’s Dome and wander around picking up rocks. Each turned out to be at least twice as hard as it looked, so that any one would have been a full morning’s adventure.

So the Valles Caldera trail looks pretty short and sweet on a map, but it turns to be a fairly strenuous hike on the way back (though not unpleasantly so.) This is one of two no-fee trails in the Valles Preserve. For now; apparently they are going to increase accessibility to the Preserve starting in December, which I hope means there will be a lot more free hiking.

The trail starts on the north side of State Road Four, a little ways past the turnoff to the Dome Road but before you reach the caldera: here. 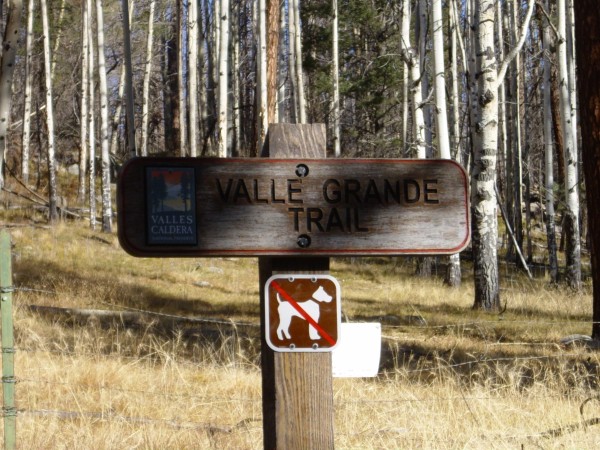 I see a lot of this, which is only one of many excellent reasons I don’t take the Dimwitted Dachshund Duo on these little trips. 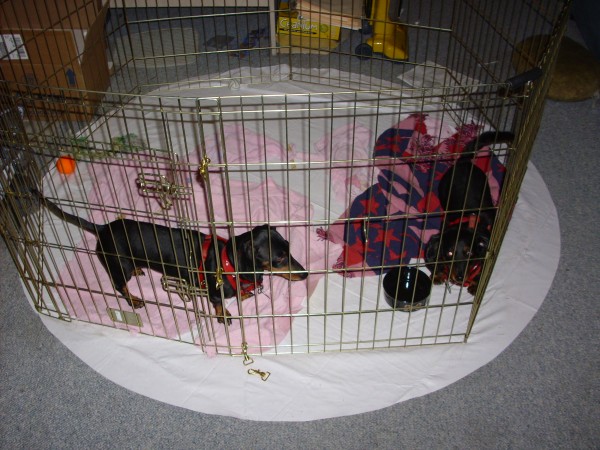 I started off fairly early in the morning, and it is definitely already early winter in the Jemez, with patches of snow here and there. It made for a very pleasant walk, actually.

Not that Nature is always so inviting: “None shall pass…” 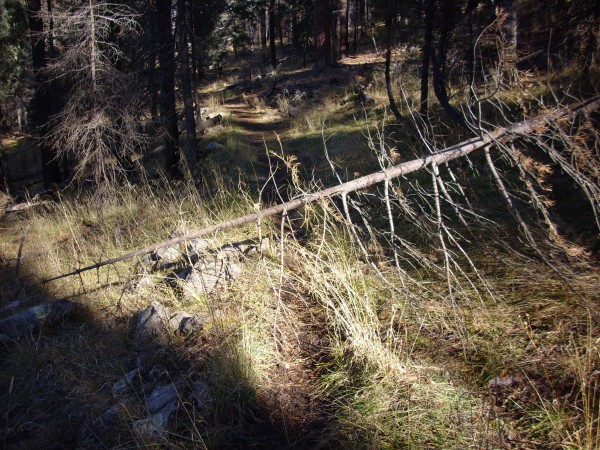 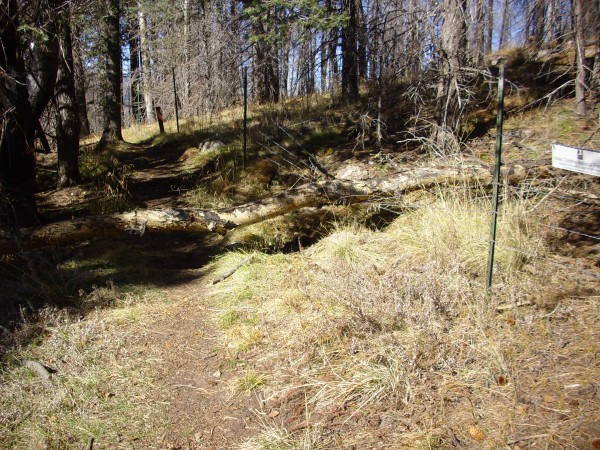 There were three or four of these along the trail. It does not appear that the trail has been recently maintained, or else a lot of trees have been feeling murderous lately: 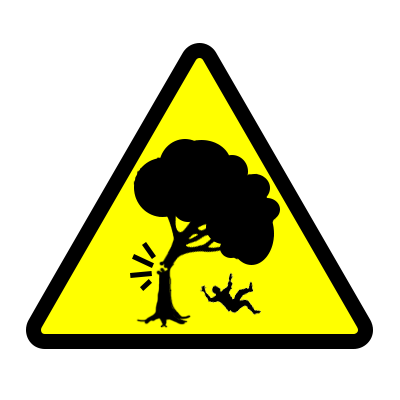 The trail winds over the hill and down the side of the caldera wall. The whole area is marked on my geological map as Qafo, which my secret geologist decoder ring tells me means that this is an old alluvial fan — quite possibly dating back to the collapse of the caldera 1.2 million years ago. There’s certainly plenty of evidence of that: 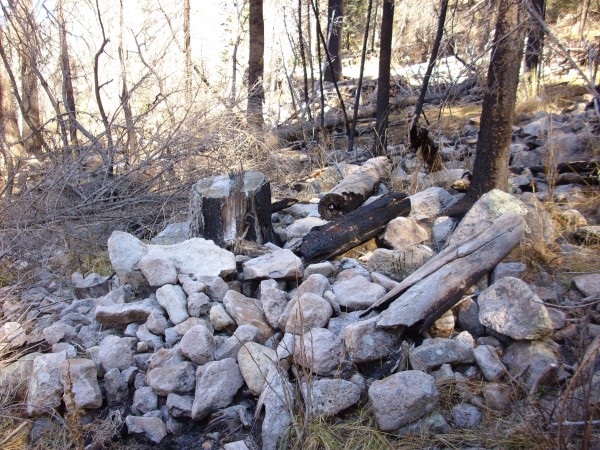 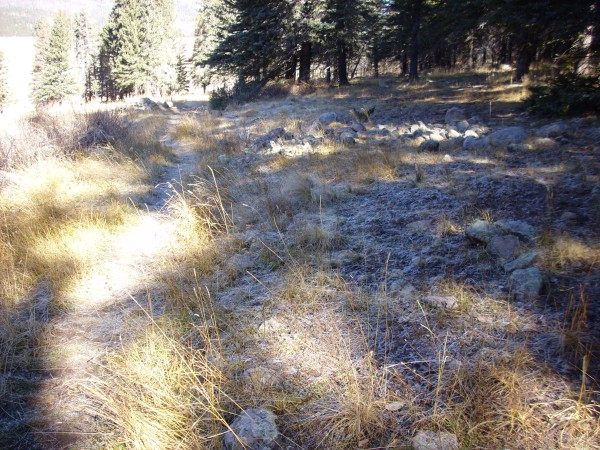 According to this interpretation, these fields of boulders correspond to landslides back into the caldera after the caldera floor collapsed.

There is a fair amount of fire damage in this area: 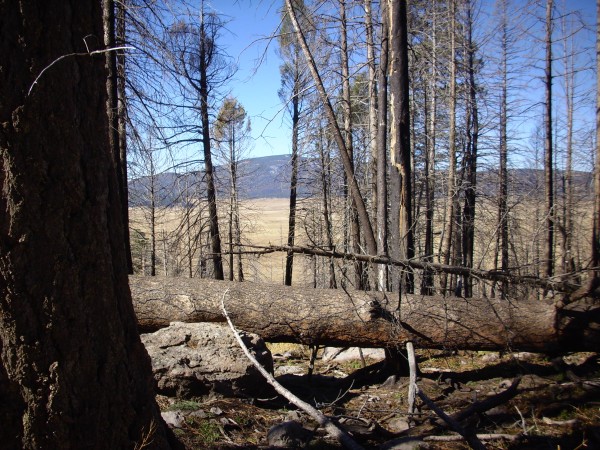 However, this is fairly patchy damage, and most of the trail is still forested. There is also a fair amount of wildlife still in the area. Elk tracks: 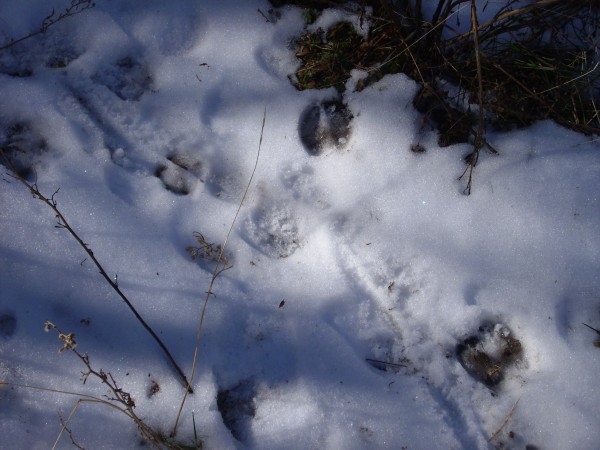 I also saw some kind of canine tracks. They seemed too small for a wolf, but I didn’t think coyotes came up this high. No other human tracks. 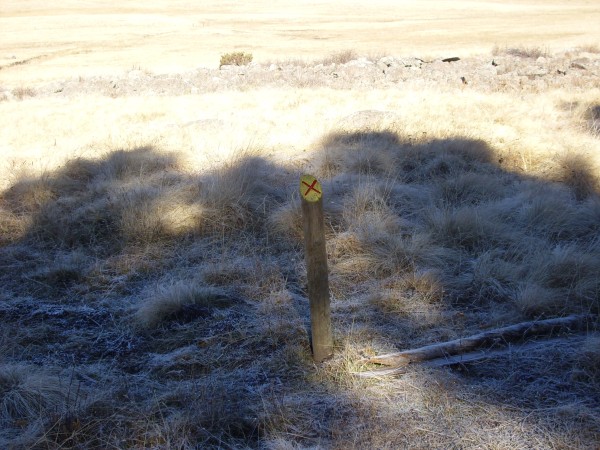 That, or it’s a warning that mutants are about to attack. This being near Los Alamos, I suppose one shouldn’t immediately rule out that possibility.

The panorama here is impressive:

There was a large bounder field just beyond the trail end: 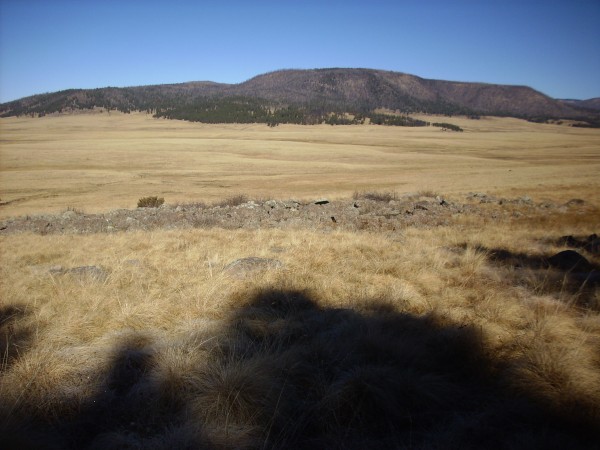 This is located about here. You can see why this looked like a short hike to me on Google. I did not think it would be a full hour round trip.

The boulder field is probably the toe of a landslide, but it looks just a little like a terminal moraine, except that there supposedly were never any glaciers in the Jemez. Go figure.

Something I found interesting, in a geeky geologist kind of way, is that the boulders along the trail show a compositional grading. Those down on the caldera floor, like the ones in the boulder field at the end of the trail, were all rhyolite: 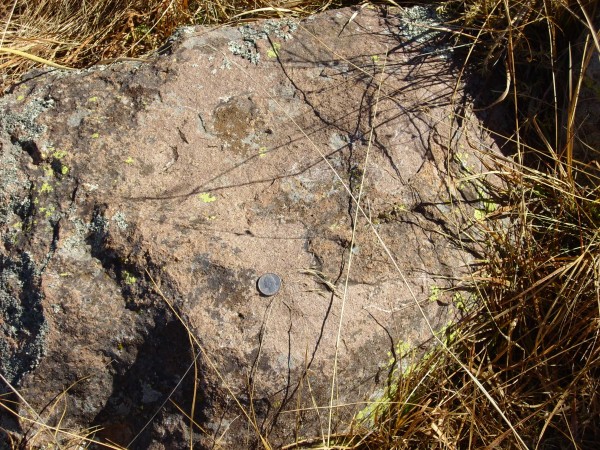 But higher up the side of the caldera rim, an increasing fraction of the boulders were the characteristic porphyritic dacite of the Tschicoma Formation: 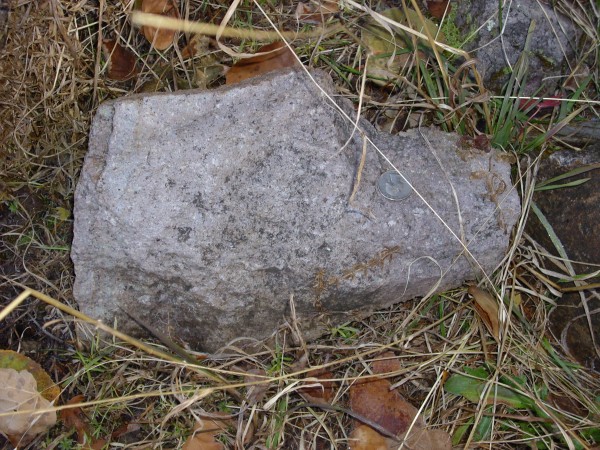 I’m not quite sure what to make of it. The caldera rim is made of Tsichoma dacite. I’m not sure where the rhyolite further down comes from.

All in all, a pleasant hike through a wonderland of frost: 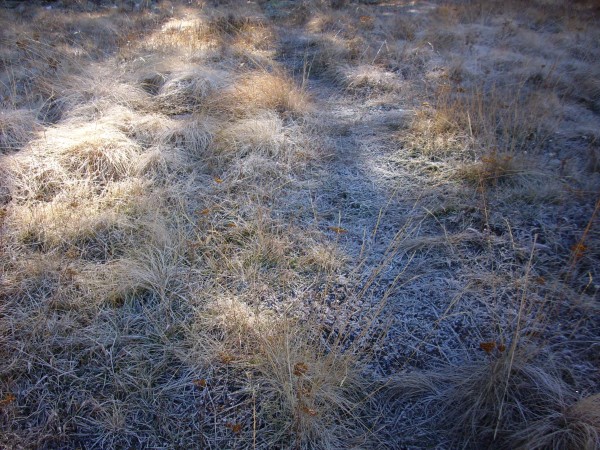 So it took an hour there and back. I still had plans to hike up a mountain from Graduation Flats and drive around St. Peter’s Dome.

I gave up on the hike from Graduation Flats pretty quickly. It was a long ways from the flats to Rabbit Mountain and there’s no trail. However, one of the forest roads cuts across the south flank of the mountain, and I got my sample of Cerro Toledo Formation there. So? The caldera erupted twice; the first time 1.6 million years ago and the second 1.2 million years ago. The ring of domes inside the caldera reflect the more recent eruption. But there are a few domes further out that seem to have formed following the older caldera eruption and were not destroyed by the more recent eruption, and Rabbit Mountain is one of these. I wanted a sample for my collection.

Um, no photo. It’s rhyolite. You’ve seen it before. The Rabbit Mountain Rhyolite is a little grayer and even more nondescript than what I’ve photographed before.

So on to St. Peter’s Dome. There is a bumpy dirt road into this cluster of mountains, which is located west of Bandelier: 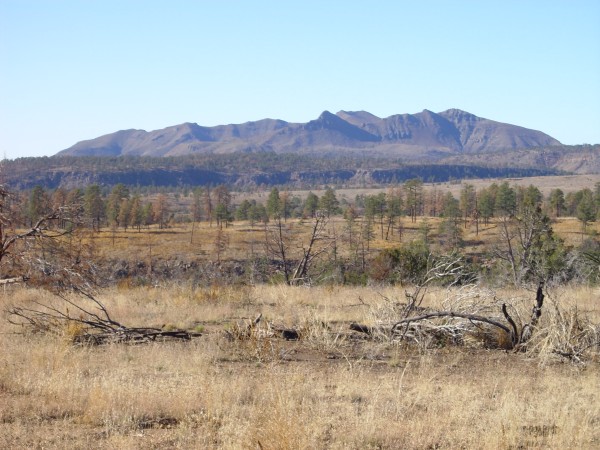 I took this picture from State Road Four near the Bandelier entrance while driving out. It’s the view from the northeast. The forest road into these mountains actually comes in from the west.

The mountains themselves are a remnant of some of the older eruptions in the Jemez area, the Keres Group. They’re composed of Paliza Canyon Formation, which is about 12 million years old (give or take a few million years) and which is mostly andesite, a fairly low-silica rock, with patches of some even lower-silica basalt and a little bit of higher-silica dacite and rhyolite. I don’t have a lot of andesite in my collection yet. The mountains have the usual mantle of Bandelier Tuff, which forms the bathtub ring around the mountains (which may actually be a fairly apt metaphor.)

There are some interesting-looking layers of rock in these mountains, just waiting for some ambitious geology graduate student to map out the stratigraphy in detail.

The road in winds past a little knoll of notably dark-looking rocks: 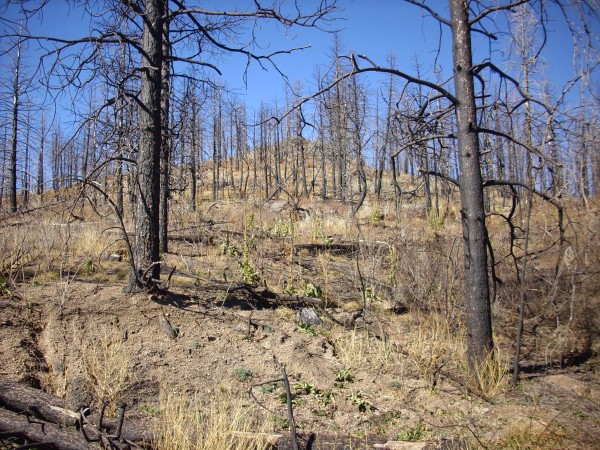 Set may remember this from last spring. This is also Paliza Canyon Formation, forming a little island sticking up above the ubiquitous Bandelier Tuff, but it’s a rather unusual rock type: porphyritic hornblende dacite. The rock is very dark even though its silica content is not that low, because it consists of large crystals of high-silica quartz and feldspar bound together by low-silica hornblende, which is a relatively weak pitch-black mineral. When you break off a chunk, it breaks through the hornblende, which makes the rock look more uniformly black than it actually is.

St. Peter’s Dome from the west: 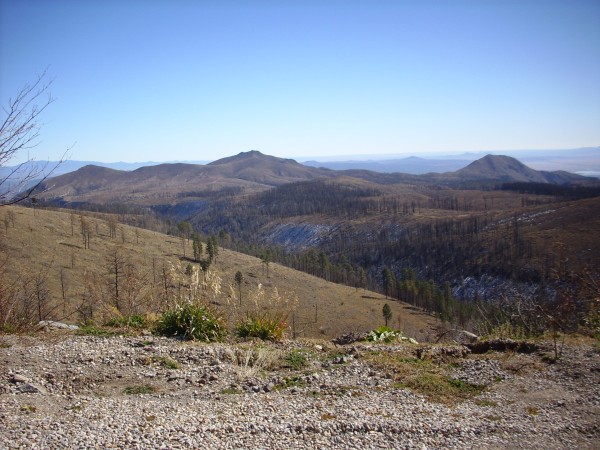 This spot is not far from the hornblende dacite dome. Wonderful view from here. St. Peter’s Dome is the high spot in the middle distance; there’s a ranger station on top, though you can’t quite make it out here. That’s Cochiti Reservoir peeking over the peak at the extreme right.

So the road winds its way over the Bandelier Tuff and up the side of the Dome, getting progressively worse and worse, until you get to this point: 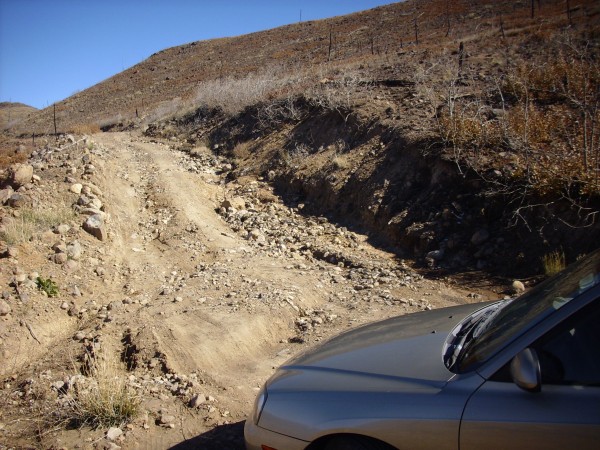 The picture doesn’t do justice to how bad the road becomes here. I could swear my little Korean clown car braked of its own accord at this point and sat there shivering. “Nope, nope, nope. Not going any further.”

I could have hiked the rest of the way, but only if I had not already spent most of the morning hiking elsewhere. Some other time.

I did at least make it far enough up the mountain to find one of the Paliza Canyon andesite flows: 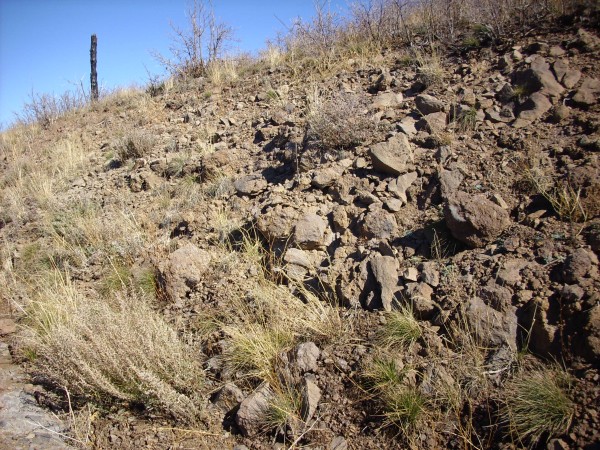 Again, the photo doesn’t do it justice. The transition from light Bandelier Tuff to dark andesite is fairly striking.

And I may have to invest in a geologist’s hammer. Andesite is amazingly tough rock. I managed to break off a piece, but trimming it down for my collection when I got home took a sledgehammer. And I found a basaltic andesite boulder that was even tougher: I finally gave up trying to break off a piece and brought the whole boulder home for further reduction. Hey, I could (with effort) lift it with one hand, so it’s a hand sample, right?