After discussing travel routes with Robin over breakfast, I decided to take a somewhat longer but more scenic route home, through the South Park area of Colorado. This meant driving through the front range of the Rockies, with all its interesting geology.

Don’t know the geology enough to tell you about everything here, except that the red layer at bottom left is probably Triassic and the same formation that dinosaur footprints and bones have been found in. 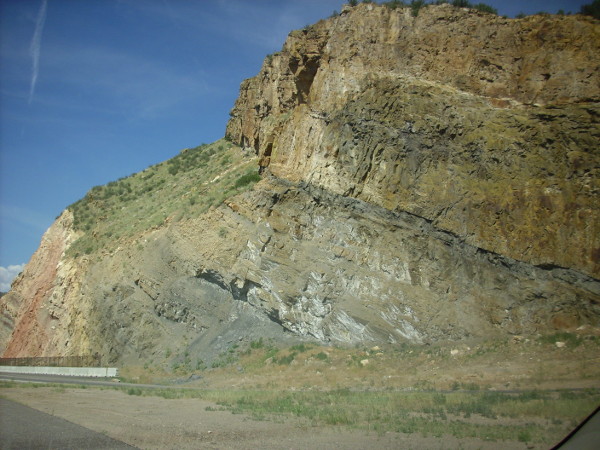 Through the mountains, full of Precambrian granites and metamorphic rocks. None of which I had logs for, though I enjoyed the sights. 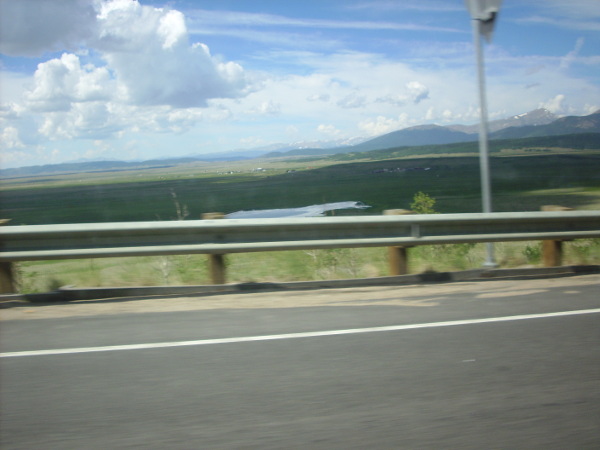 Back into the mountains, and about here I had to dump some liquid waste. The road cut turned out to be rather interesting, consisting of granite cut by a basalt dike, both subsequently subject to some metamorphosis. The basalt was highly serpentinized. 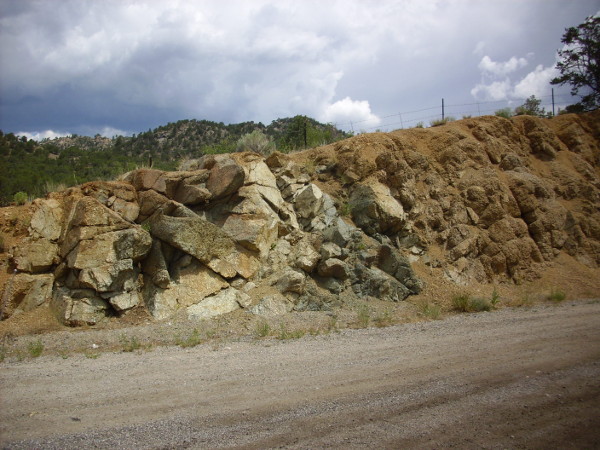 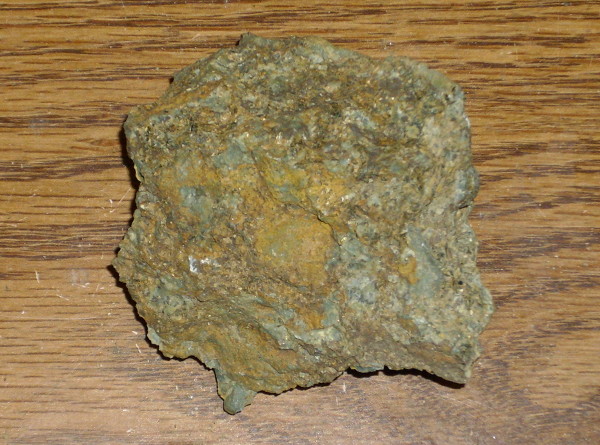 The metamorphosis process has replaced the hard opaque black basalt with translucent green serpentine so soft I could almost scratch it with a fingernail if I worked at it.

One of the minerals that makes up serpentine is brucite.

Mount Princeton, of the College Range, ahead as I come to Buena Vista. 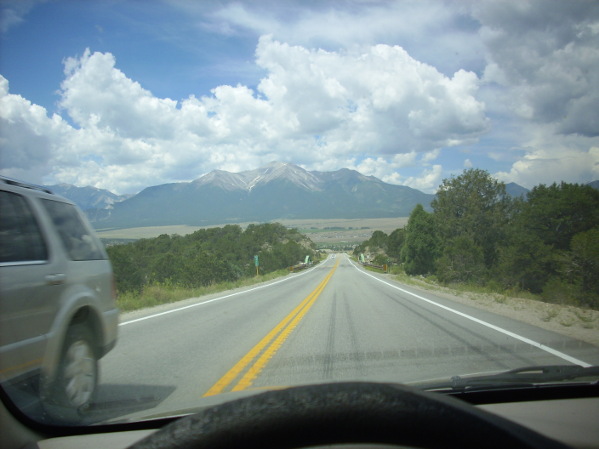 Robin had advised me that the only place for a decent lunch was Salida, though it was a bit off my route. Regrettably, I did not find the cafe he recommended, and ended up pulling into a Taco Bell/KFC fast food place. Which had the Taco Bell side shut down for remodeling, so it was greasy fried chicken, baked beans, and a wonderful warm soda biscuit I could not safely eat. (Sigh.)

From there back to the main road and on to the San Luis Valley, the northernmost large basin of the Rio Grande Rift. 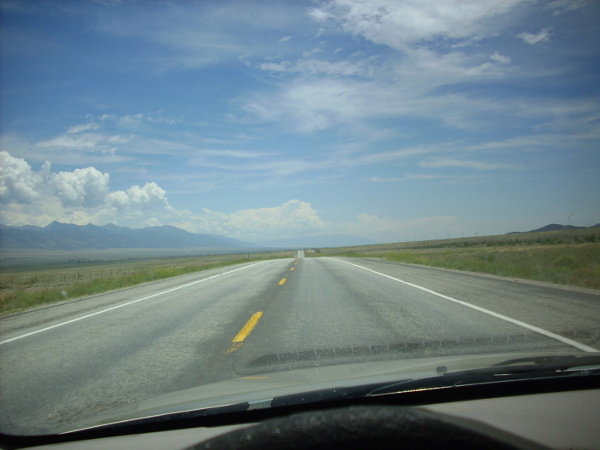 At this point, I took the straight route, even though it was a secondary road. Mistake. It was under construction — and the idiots in charge didn’t think to put up any sign at the crossroads to redirect traffic. As Robin once commented, Colorado must hire its civil engineers from the bottom half of each class. But then why should they be different from any other state? [/snark]

Into Alamosa. Took the direct route towards New Mexico, in spite of fears of more construction along the way. (Turned out not to be any.)

Just short of the border, one sees Los Mogotes. The gorge on the south is scenic, but I didn’t get close enough for a picture that did it any justice. 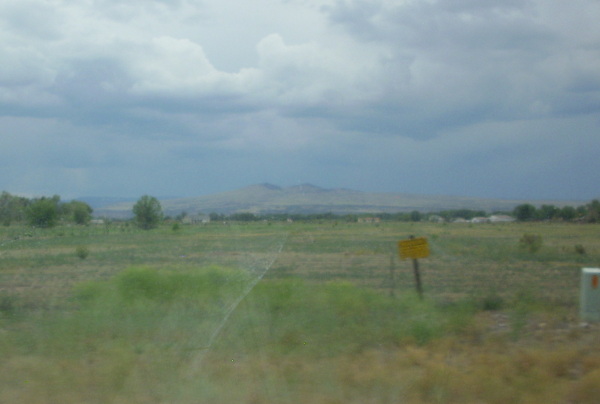 Los Mogotes is a cluster of cinder cones sitting on extensive lava flows at the northern end of the Taos volcanic field.

Ute Mountain to the east. 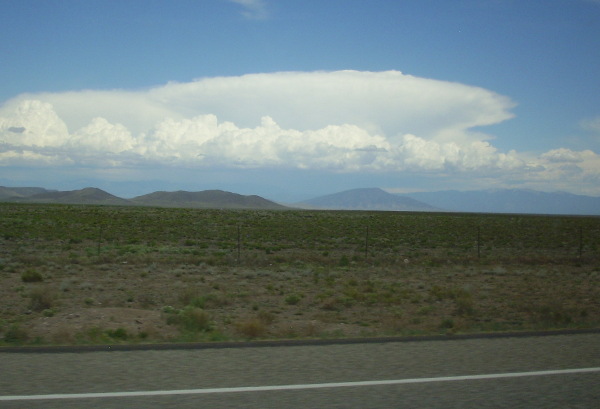 To the south, San Antonio Mountain towers over the Taos plain. 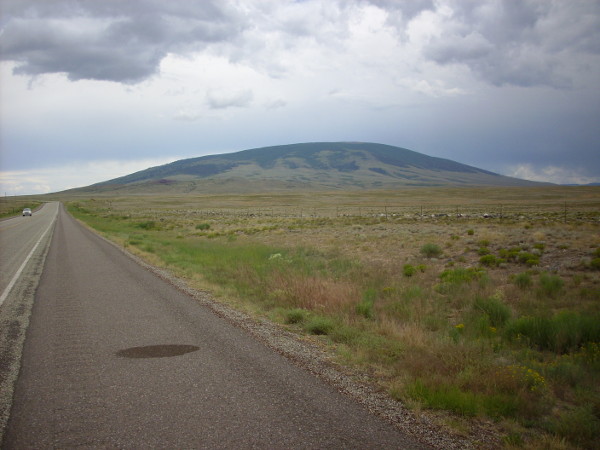 Both have the low profile characteristic of shield volcanoes, but not so low that they blend into the surrounding basalt flows. This suggests an intermediate composition, such as andesite or dacite, with moderate silica, giving moderate viscosity compared with the low viscosity of basalt. My road log didn’t say, unfortunately, but some exposed rock on the northeast flank is dark enough to suggest andesite.

Further south, there is a cinder cone being mined for red scoria (“pumice”) produced by weathering of basalt cinder. 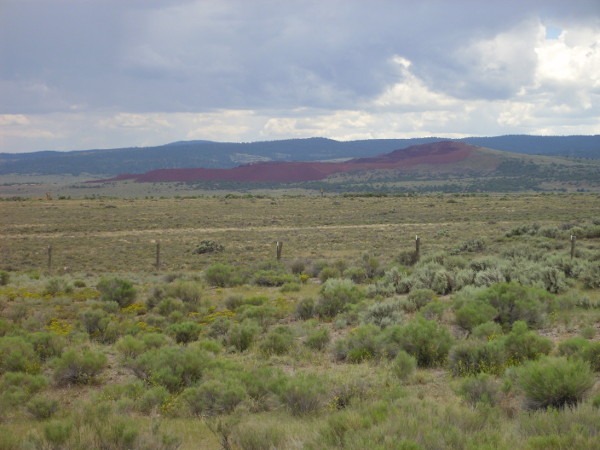 There was some mining activity in the other direction, into what looked like rhyolite or tuff, which I didn’t pay much attention to. Turns out it was a perlite mine. So here very silica-rich rock has erupted in spitting distance and time of silica-poor rock. 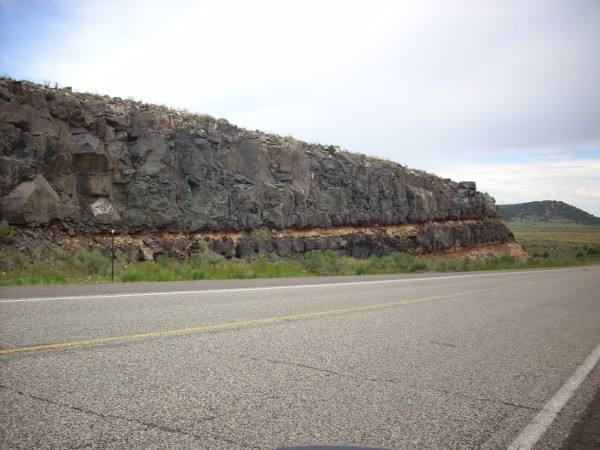 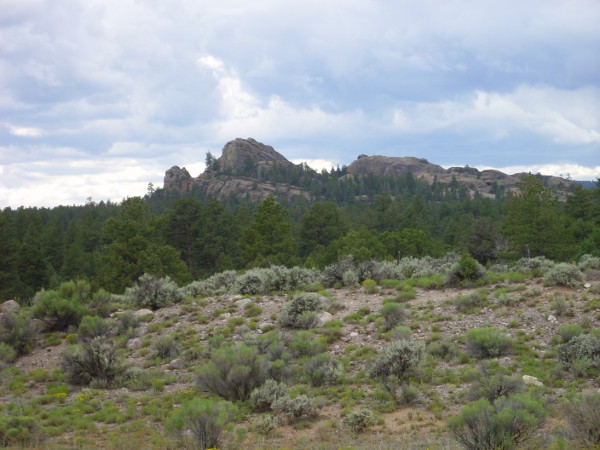 To the northeast, I get a glimpse of the Questa molybdenum mine. This is a very old caldera that has since been uplifted by tectonic forces and eroded nearly to its magma chamber. Lots of mineral veins. Would like to visit sometime — the mine is currently shut down so it may be possible to explore a bit. 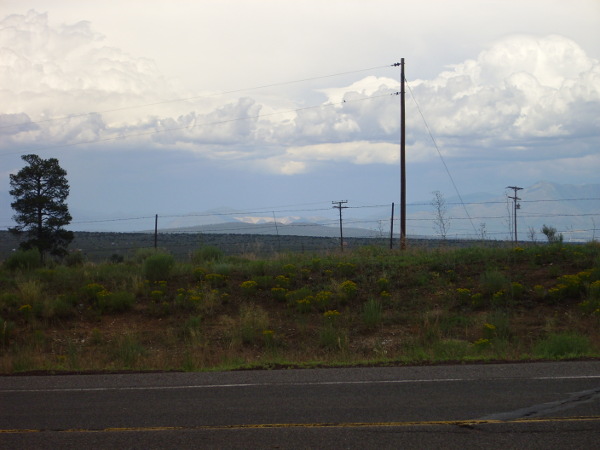 From there to the Ojo Caliente area. The road cuts show Santa Fe group, with brown sediments interbedded with gray lahars, very possibly from the Jemez — we’re getting close to home! 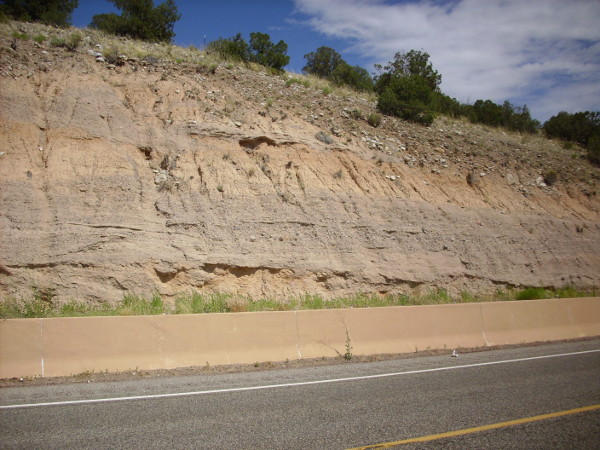 From there along the north side of Black Mesa to Espanola. Interesting geology, including an impressive dike, but I was eager to get home and this is close enough I knew I’d be out here again.

Espanola is practically home. Cindy and I have been shopping there every week. So no more pictures.

Got home. Kira scowls at me. Nathan growls at me. Michael tells me to get lost (Michael is autistic and tells everyone to get lost.) Cindy gives me a hug but then complains that the Wii exercise program just told her she’s fat. (She is not fat.) Well, the dog was excited to see me, and I think one or two of the cats (Gollum and Bear.)

Good to be home. Good to find things normal there.