Winter is a good time to hike areas at lower elevations. This particular weekend I was already in Albuquerque on other business, the weather was warm (if windy), and the Albuquerque volcanoes beckoned.

Ironically, I lived just north of here, in the Ventana Ranch subdivision, for five years, but I never found occasion to visit the volcanoes. I was overdue.

The Albuquerque volcanoes are located west of the Rio Grande along two parallel fissures. Both run very nearly north-south, but they are offset by a few hundred yards. The northern segment is not accessible by trail, but there are fairly good trails with rest stops covering the southern segment.

Both are within Petroglyphs National Monument, which is almost unique among Park Service sites in recent experience in charging no admissions fees. However, the web site encourages checking in with the headquarters first, so I duly stopped by.  The book shop sold a fairly excellent field guide to the geology of northern New Mexico parks and monuments, for less than I was preparing to pay for a copy from Amazon, so I went ahead and purchased it.

From there to the volcanoes trail head. Free parking; the only catch is they lock up at 5:00 P.M.

I decided to hike the three main peaks from south to north. A panorama from around this point:

At right is JA Volcano. The peak at left is Black Volcano, while Vulcan is just visible above the left shoulder of Black Volcano.

Here’s a closer view of JA Volcano. As with most photos at my site, you may click to enlarge. 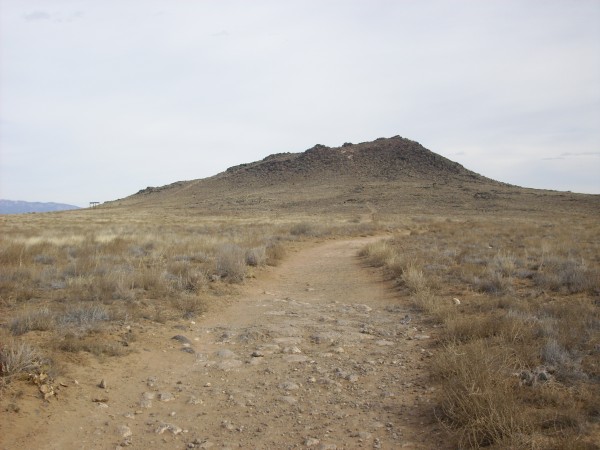 JA Volcano viewd from the west

From closer up, you can see that the top of JA is rubbly basalt. 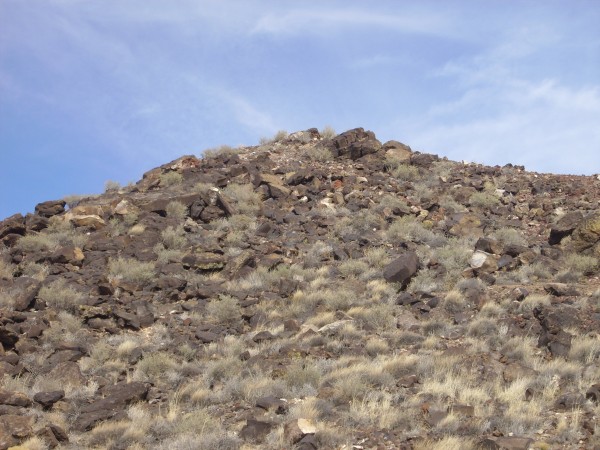 You may notice that some of the basalt has a white crust of caliche, which is a form of calcium carbonate (lime) deposited from groundwater rising to the surface and evaporating. It is a common feature of geology in the desert Southwest. There are also some basalt boulders that have been oxidized to rust red by contact with groundwater while still hot; one small boulder appears above just below the peak of the volcano. You can see the difference between oxidized and unoxidized basalt in the pebbles scattered around the volcano: 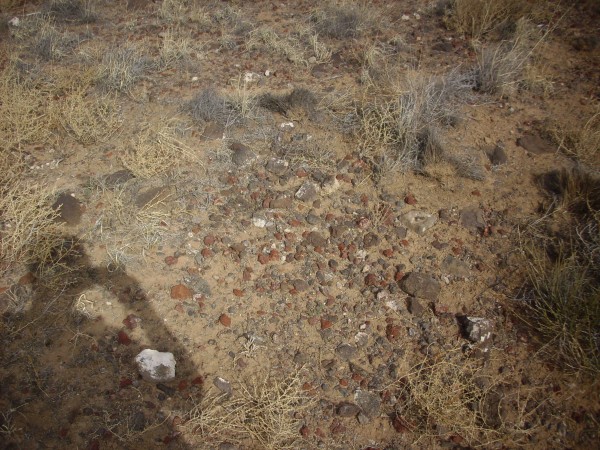 On the southeast slope of JA, near the top, there is what appears to be a low dike: 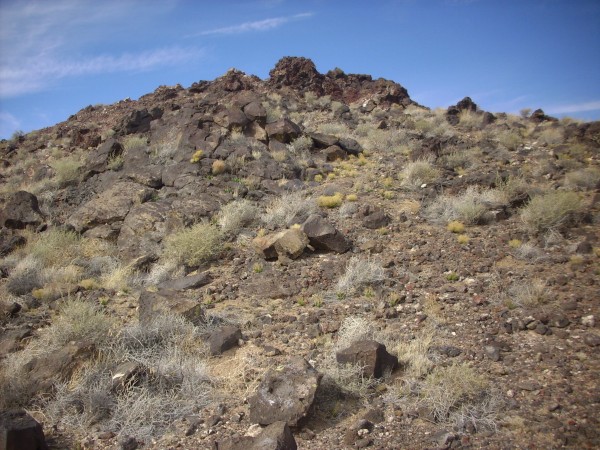 On the east side, there are more sheetlike flows showing shear banding. 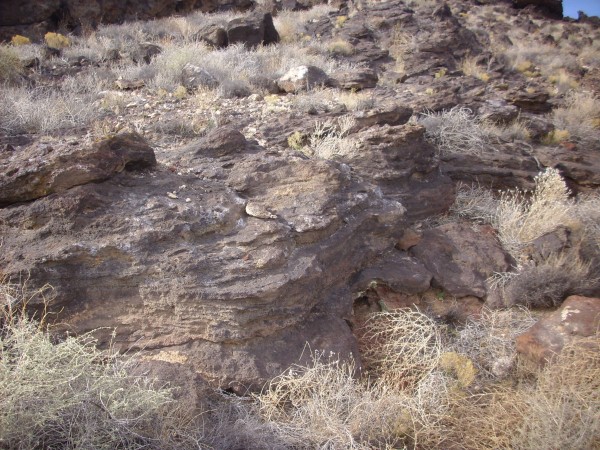 The lava must have been quite hot to have a low enough viscosity to flow this way.

One can also see the contact marking the base of a flow. 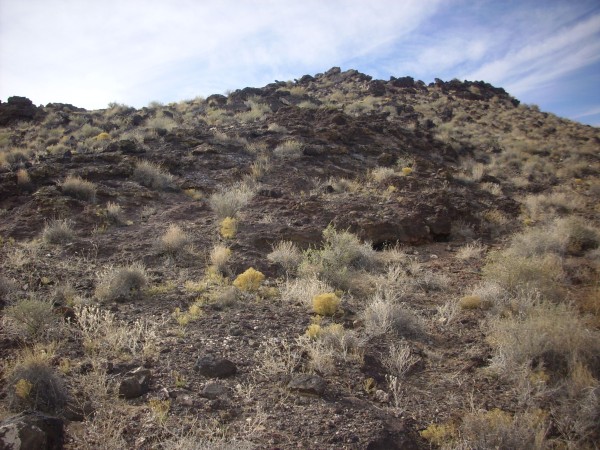 The base of the flow is seen right of center.

Here’s another view of that dike or ridge (pressure ridge?) seen from the northeast: 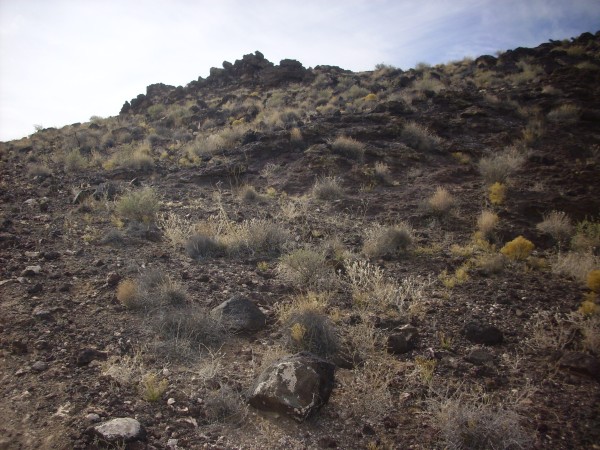 Pressure ridges are a common feature of large flows, but I don’t know if they are seen on the sides of spatter cones. (The Albuquerque volcanoes are essentially large spatter cones.) This does look a lot like a pressure ridge, and I’m skeptical there’s been enough erosion here to uncover a dike (formed by magma filling and solidifying in a fracture underground.)

From the north side of JA, we get a better view of Black: 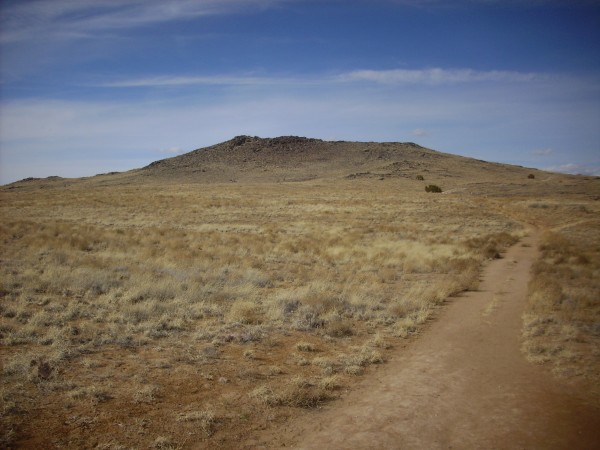 Along the trail north, I noticed that there was a striking color contrast in some of the dormant vegetation. Some was nondescript straw color, but some was a striking red color while some other was ghostly white. I’ve not payed that much attention to vegetation on my wanderlusts, but now and then something seems like it is worth a picture. 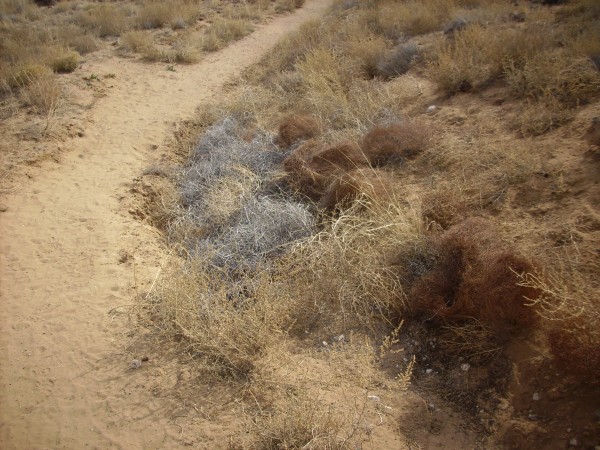 Also along the trail was a highly calichified pit. 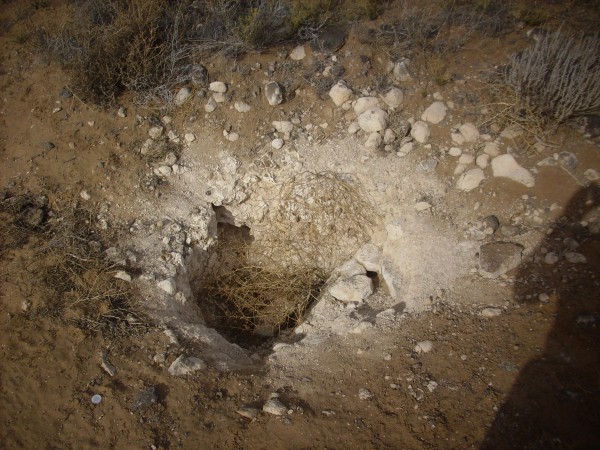 Caliche takes some time to build up, so this is almost certainly a natural feature, such as a chimney in the underlying flow.

Of the three volcanoes I visited, Black was the least remarkable from ground level. I had limited time and so decided I would climb only to the top of Vulcan.

Which is impressive viewed from the north slope of Black: 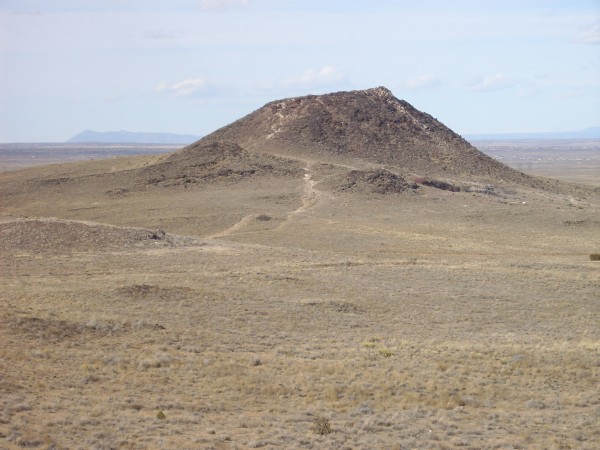 Notice the parasitic cones on the near slopes of Vulcan. There is also a very low cone to the left, at the edge of the picture, which I found unremarkable from ground level but which is much more striking in the aerial photograph.

Here are a couple of closer views of the parasitic cone on the east side of the trail in the previous photograph. 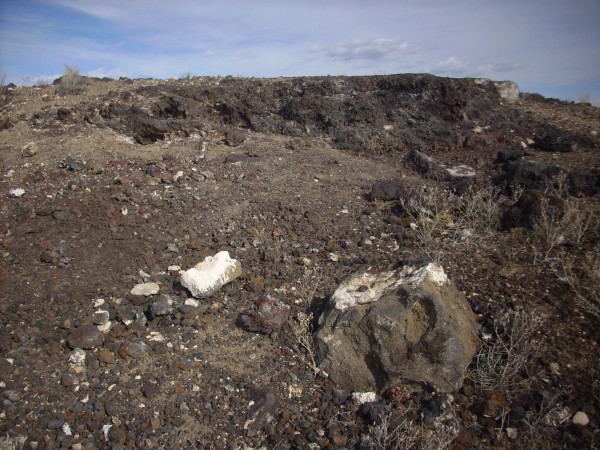 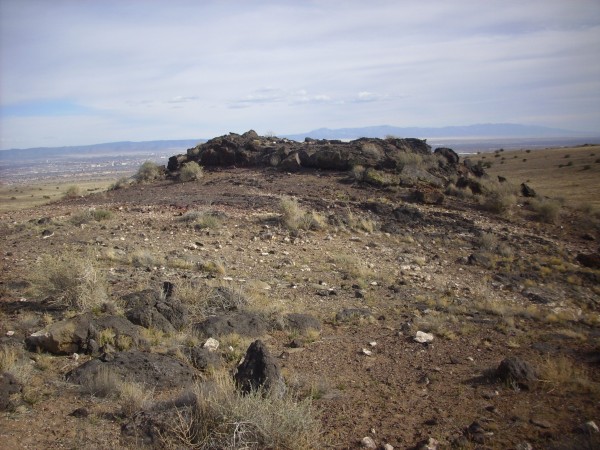 I’m not sure what this knob is, visible also in the photograph of Vulcan above: 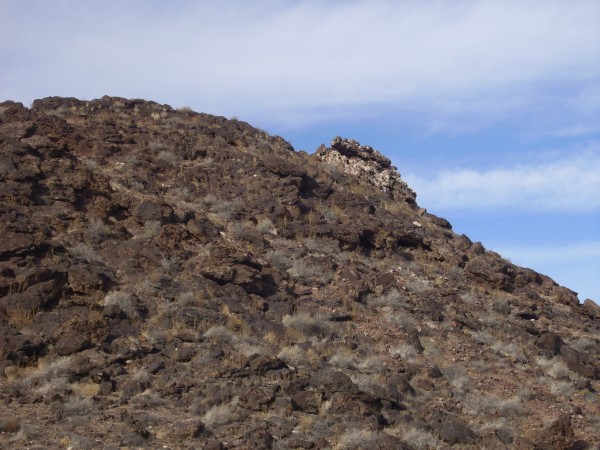 I’m tempted to call this Vulcan’s Ear, but that would be just too nerdy.

There is a trail to the top of Vulcan from the southwest. Near the top one encounters a rock window. 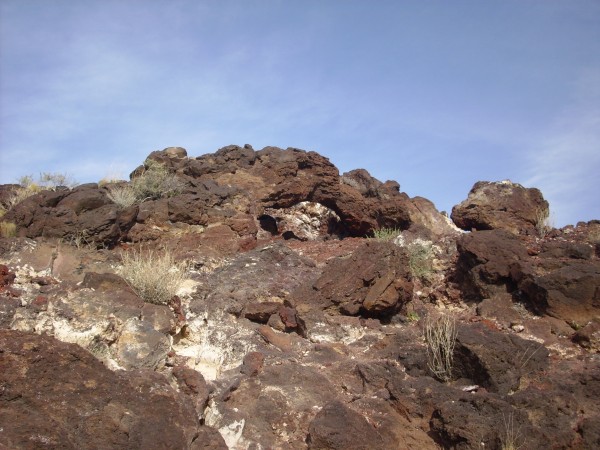 Looking south from atop Vulcan: 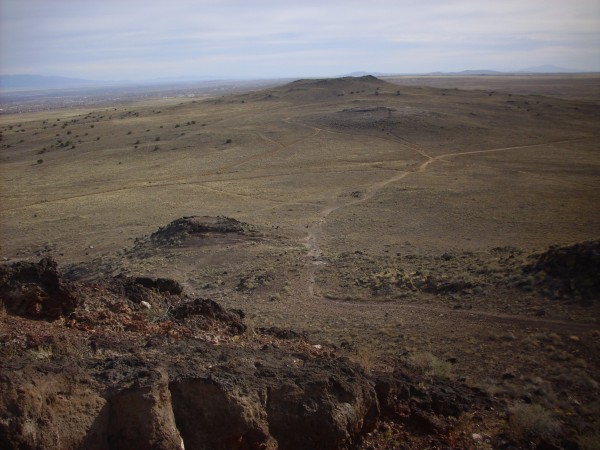 Note the flat top of the parasitic cone from the earlier photographs. Many of the volcanoes here have surprisingly flat summits. The one on Vulcan has been identified as a frozen lava lake, but I don’t know about the others.

Southeast of Vulcan is what looks a little like a maar: 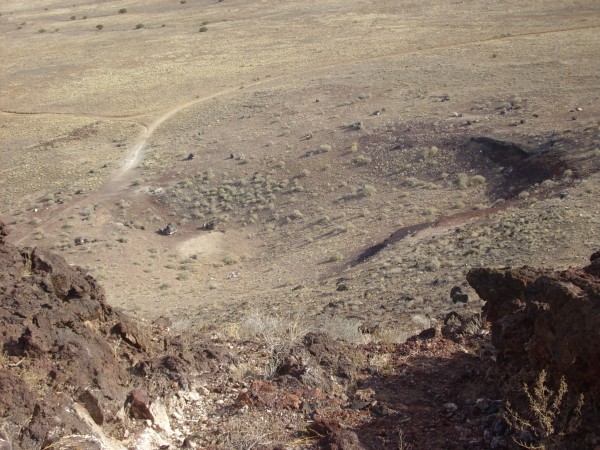 Maars occur when magma intrudes water-saturated bedrock at a shallow depth. But this is well above the Rio Grande, and the well-worn roads converging here suggest this was actually once a quarry for volcanic cinder. The southernmost of the Albuquerque Volcanoes was entirely quarried away before the Petroglyphs Monument was established.

I walked right across the flat summit of Vulcan without thinking to photograph it. What caught my attention instead was the deep valley on its north flank. 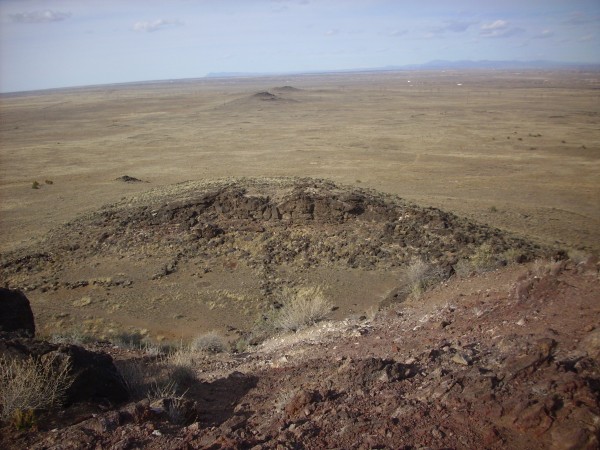 My field guide noted that Vulcan had a large frozen lava lake in its summit crater, with the spatter basalt piled higher to the southeast, showing the direction of the prevailing winds. Which was the summit crater, the flat top or this large valley? I’m still not sure.

A close view of that valley: 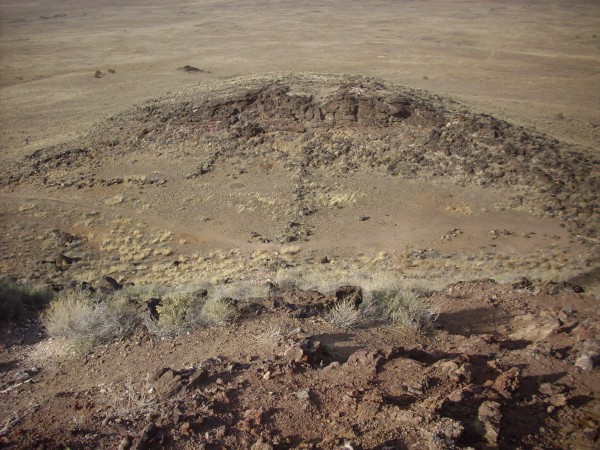 There are numerous small lava tubes on the east and northeast flank of Vulcan. Here’s the two ends of one of the larger ones: 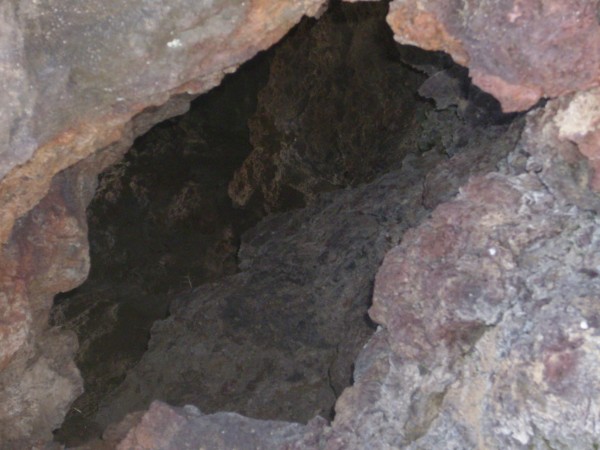 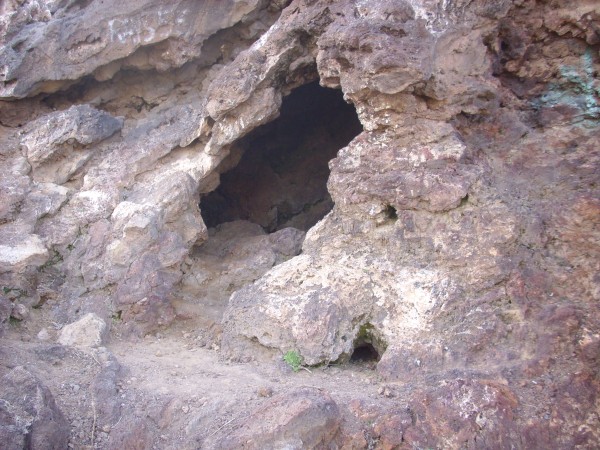 Note also some old grafitti just right of the tube in the second photo. Petroglyphs National Monument is a relatively new monument, and students frequently hiked, picnicked, and vandalized here before the monument was established. In fact, JA Volcano gets its name from large letters painted on the mountain by one of the local private schools.

I was now out of time and needed to hike back before they towed away my car, or I would have lingered some more on the summit and looked for more lava tubes.