I took Nathan to his smash tournament yesterday. We arrived in Albuquerque a little after 11:00 and he got checked in. 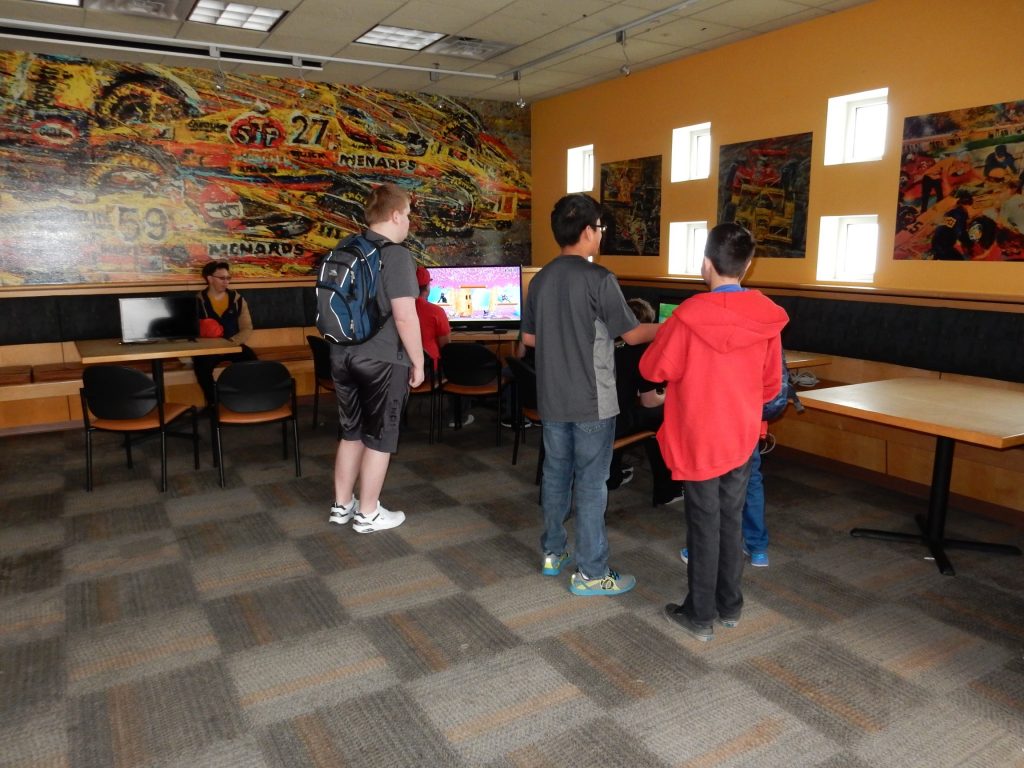 Nathan is the one with the blue backpack.

I headed to the Mormon temple, where I would be receiving ordinances (sacraments) on behalf of John Haddow (1669-?). John is my first cousin nine times removed. (Mormons are pretty serious about genealogy, and my family have been at it for generations.) I baptized a young man from my ward on behalf of John a few weeks ago, and today I would be endowed on John’s behalf. The endowment is a series of rituals of instruction and commitment that prepares one for life in general and marriage in particular. However, when I finished the first half of the endowment, which is done individually on no fixed schedule, I had an hour to go before I could perform the second half of the endowment, which is done as part of a congregation meeting on a regular schedule.

So I took the time for some pictures. Here’s the temple. 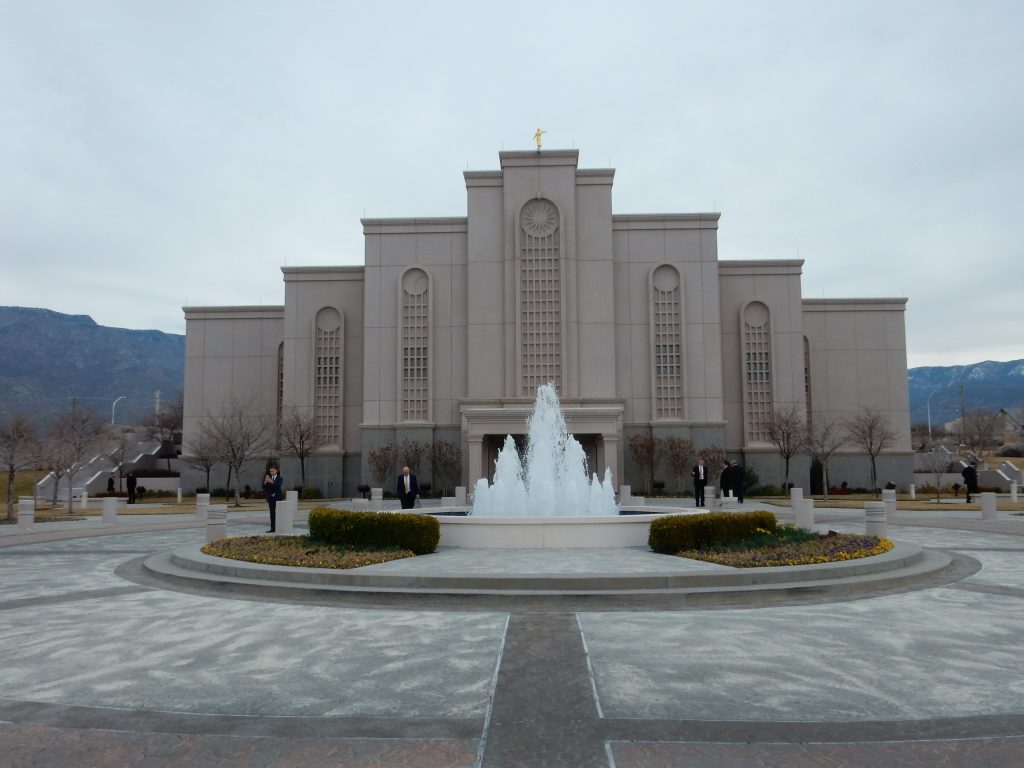 Temples are not ordinary chapels; there’s only one temple in New Mexico, while there are dozens of Mormon chapels, including one in Los Alamos and another in White Rock. Temples are constructed as symbols of the permanent, so their construction is first rate, meant to last for centuries. This one (I know from having toured it with the architect) is mostly reinforced concrete. I was rather startled when I asked him what was hardest to get right in the construction of a temple, and he immediately replied that “No one has a feel for concrete anymore.” I have long feared that our civilization is beginning to forget how to do certain things well, and this tends to confirm it.

Most of the exterior of this temple is Desert Rose pre-cast concrete, which is meant to be reminiscent of the adobe construction typical of New Mexico. The lower portion is faced with Texas pearl granite. Since the term “granite” is used in the dimension stone industry to describe a very broad range of coarse-grained rock, it may not actually be granite in the narrow sense used by geologists. One geology Web page identifies Texas pearl granite as diorite, but I’m not sure I trust that.

Regrettably, it was kind of a mucky, overcast day. My panoramas to the west turned out pretty crummy; I’m not going to bother to post. My telephoto shot of Mount Taylor might have been pretty good if I hadn’t borked the centering: 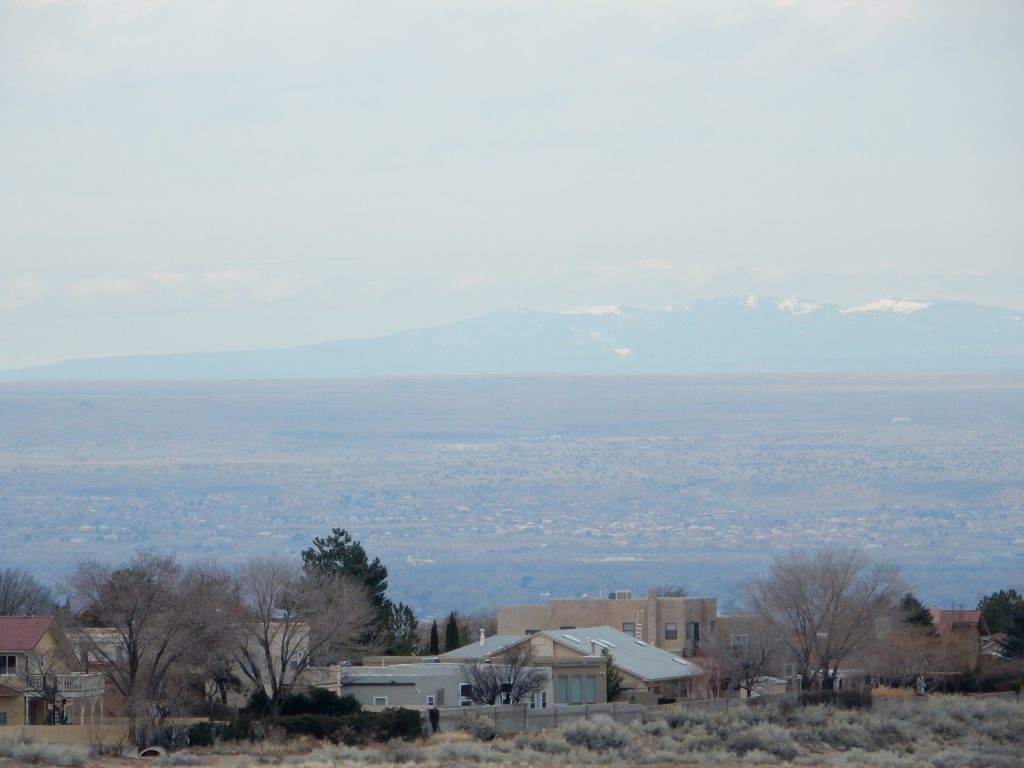 I returned to the temple for the second half of the endowment, then got back in my street clothes, drove back to check in with Nathan (he figured one or two hours for the singles tournament) and headed up to the tramway. I was interested in scouting out the La Luz Trail. This goes up the west face of the Sandia Mountains, and there’s an outcrop of rare orbicular granite above the trail. Google shows a convenient trailhead here, which is reached by turning off Tramway on Forest Road 333, but I turned too soon and found myself at the actual tramway station. The guy at the gate told me the La Luz trailhead was just up ahead, but advised me that I didn’t really want to climb the trail, because it was still waist-deep in snow at the top. Well, I wasn’t headed to the top; I just wanted to get a couple miles’ hiking in. I gave him my $2, parked, and examined the sign at the trailhead. Turns out this was for the Tramway Trail, but the map posted there showed that this did connect with the La Luz Trail, eventually. What the heck; I started down the trail.

And decided I really wanted my cell phone and went back for it. (Turned out this was a good thing.) And I got a couple of pictures of the Sandia Granite at the trail head. Here’s a very typical outcrop. 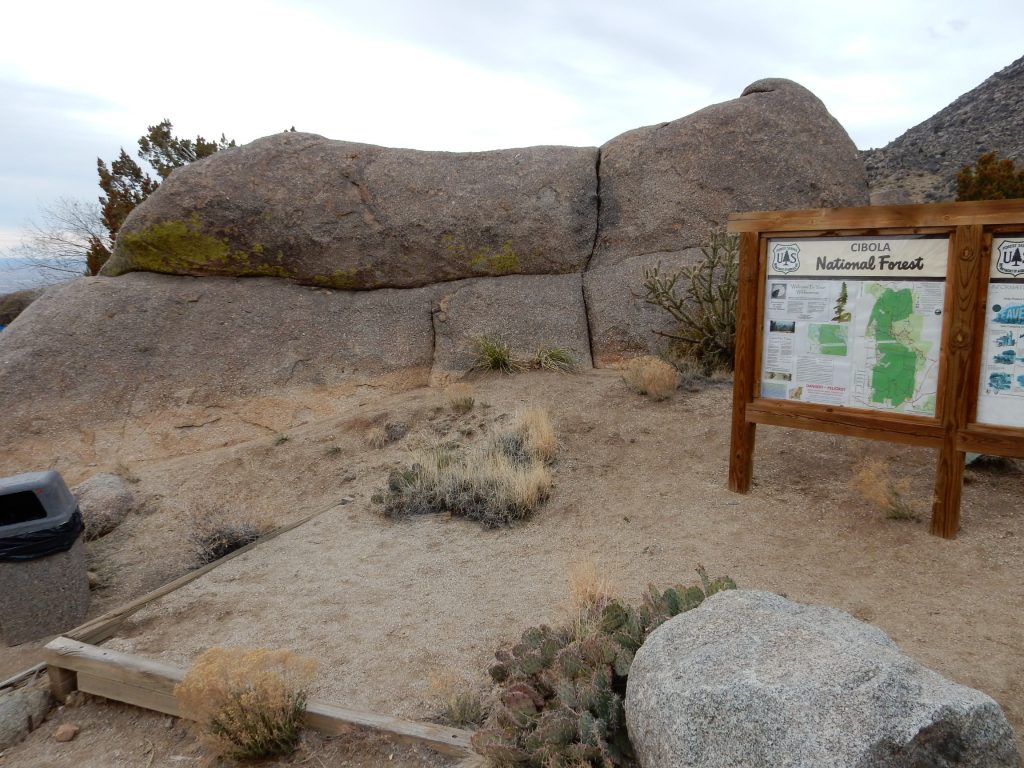 Granite has a distinctive way of weathering into rounded shapes like the bounders here. The fresh rock looks like this (as with most photos at this site, you may click to enlarge): 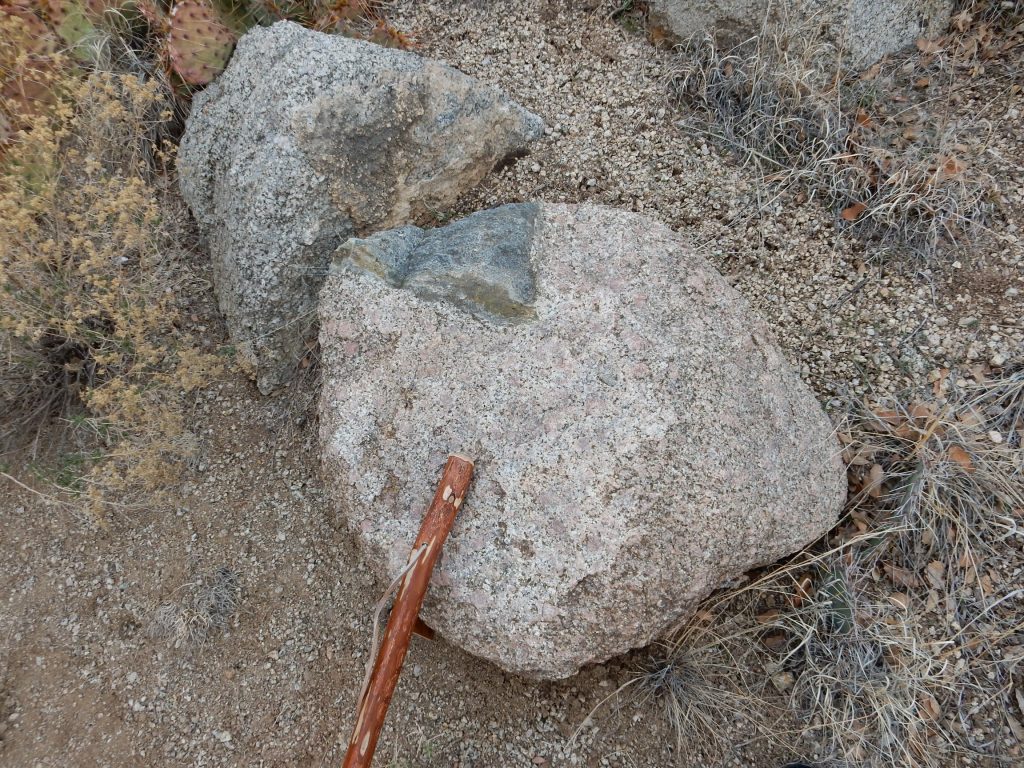 The rock is a mass of coarse crystals of feldspar and quartz with some dark biotite mica. The big pink crystals (megacrysts) are potassium feldspar.  Strictly speaking, little of the Sandia Granite is true granite, which is a rock fairly rich in quartz and with much more alkali feldspar than plagioclase feldspar. The rock here has less quartz and more plagioclase, varying from a monzogranite (moderately quartz-rich with roughly equal amounts of alkali and plagioclase feldspar) to granodiorite (somewhat poorer in quartz with mostly plagioclase.)

Here’s a closer look at the big boulders. 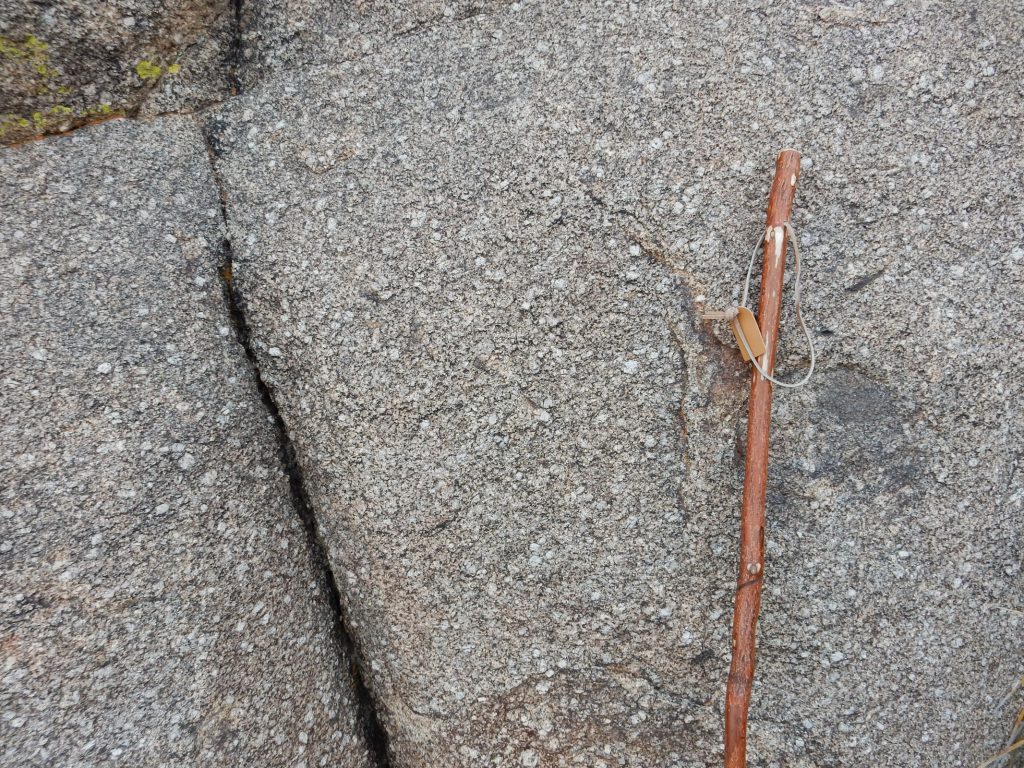 Notice how the big crystals of potassium feldspar stand out on the weathered surface. My guess is that the biotite in the rest of the granite causes it to weather more rapidly.

I headed up the trail and found a wonderful spot for a panorama of Albuquerque. First, using the easy pan feature built into my camera:

Not identical compositions, of course. But I like the second better. The pan feature is fast and easy, but getting a really good pan really does require stitching carefully composed individual frames.

Lots of characteristically weathered Sandia Granite boulders in the foreground. In the middle distance, Albuquerque sits in the Albuquerque Basin of the Rio Grande Rift, which is filled with rift fill sediments which, in places, are nearly 15,000 feet thick above the basement rock. Beyond Albuquerque are the very young Albuquerque Volcanos, and Mount Taylor is on the skyline at right.

Further along the trail are some interesting inclusions in the Sandia Granite. 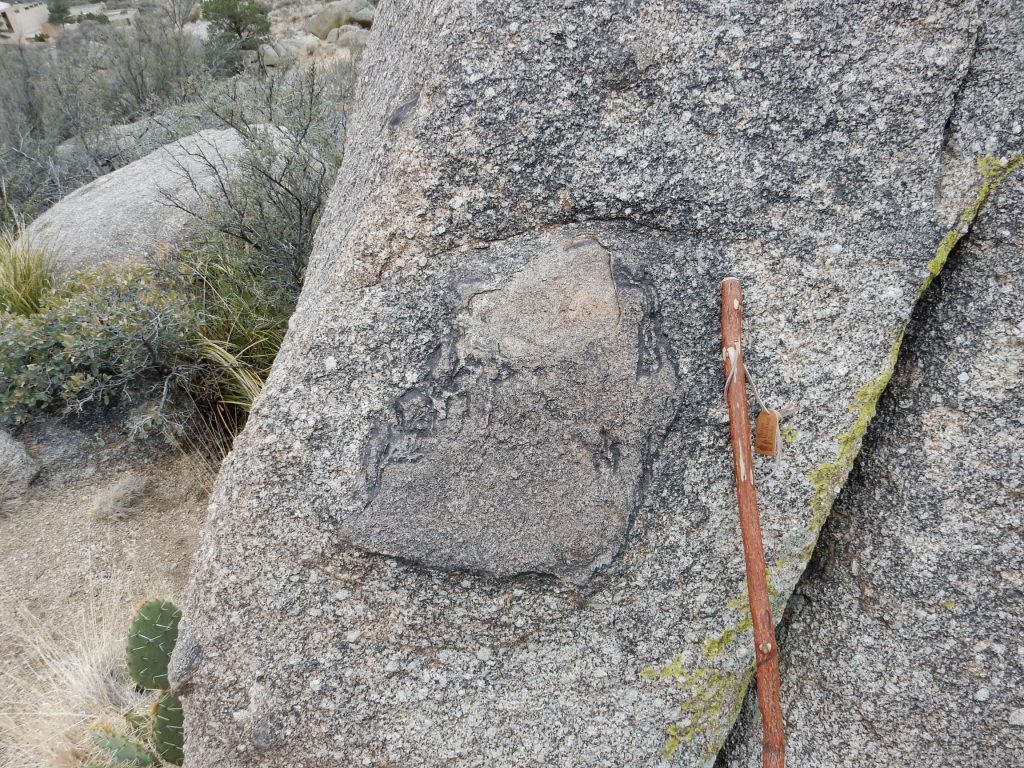 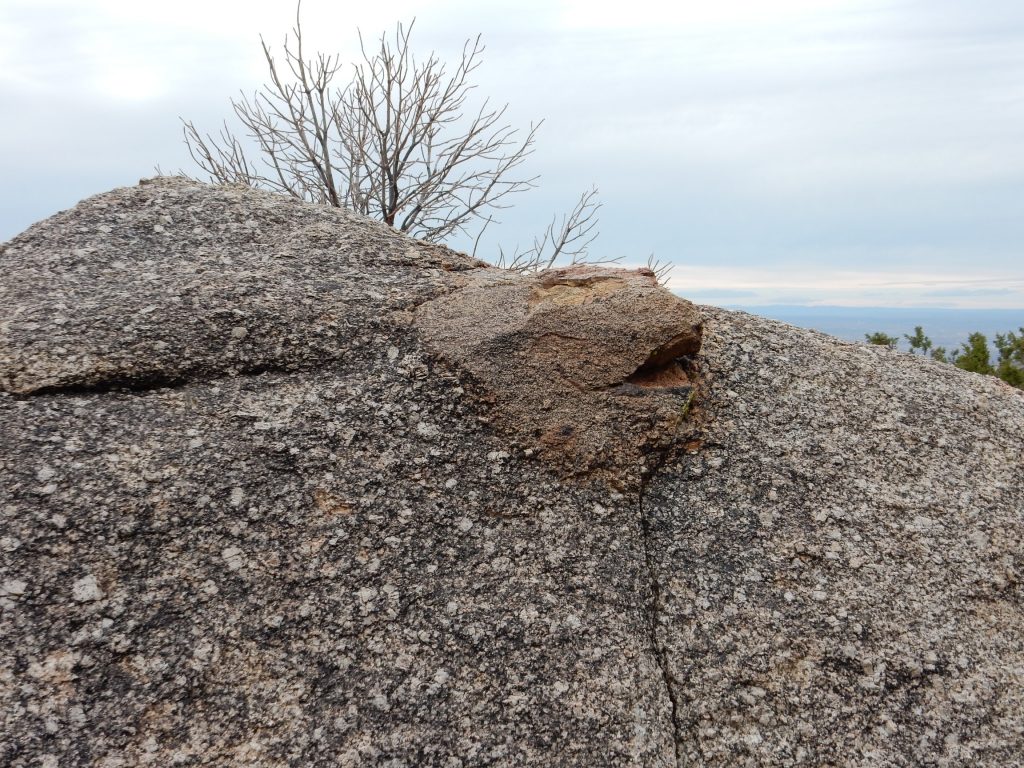 It turns out granites are surprisingly controversial. The problem is that their composition — high in silica — is characteristic of the upper crust of the earth, but there is no heat source in the upper crust that can possibly generate such large volumes of molten rock. In a few cases, granites may form when the more magnesium- and iron-rich components crystallize out of a magma formed in the upper mantle, but the amount of “primitive magma” required is unreasonable high to explain the very large bodies of granite found in some locations, like the Sandia Mountains. The more generally accepted theory is that very hot magma from the mantle can rise only so far into the crust before it loses buoyancy and “stagnates”. The magma then loses its heat to the more silica-rich crustal rock above it, melting that rock to produce granite. But a few geologists believe that at least some granite is never actually liquid; it forms by extensive recrystallization of solid rock, so that it is really a kind of metamorphic rock.

Inclusions like this are important evidence in settling the matter. The ones shown here look an awful lot like they were solid bits of country rock (the solid rock surrounding the body of magma) that were engulfed by the magma. Other inclusions, particularly ones rich in iron and magnesium (mafic inclusions), may have been liquid droplets within the granite magma, kept from mixing in the same way that oil and water will not mix. Both kinds of inclusions suggest that the granite magma had to have been liquid at some point. The mafic inclusions also suggest that primitive magma (which is mafic in composition) was indeed involved in the formation of granite magma, with some droplets of the primitive magma being mixed into the granite. Such inclusions are a common feature of almost every known granite body.

Most of the Sandia Granite is grey in color, but one comes across areas where there is more of a pink color, particularly to the potassium feldspar crystals. 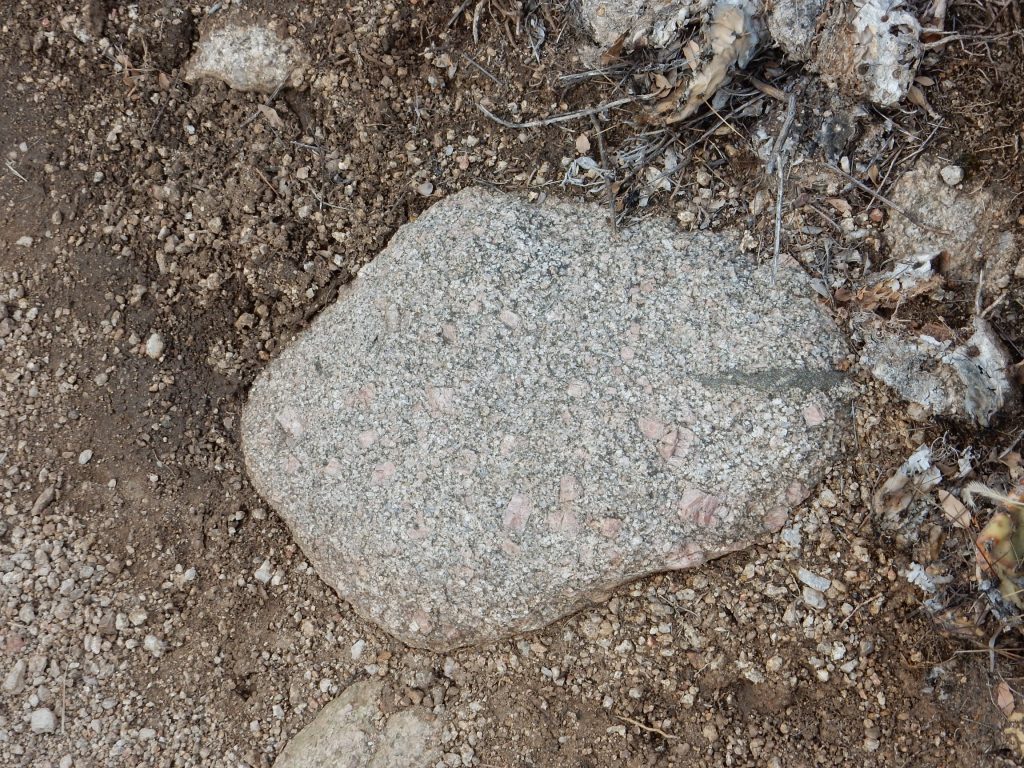 Iron does not easily fit into the crystal structure of feldspar, but ferric iron in small quantities can dissolve in potassium feldspar to give it a pink color.

I took some more pictures of the landscape along the trail, here 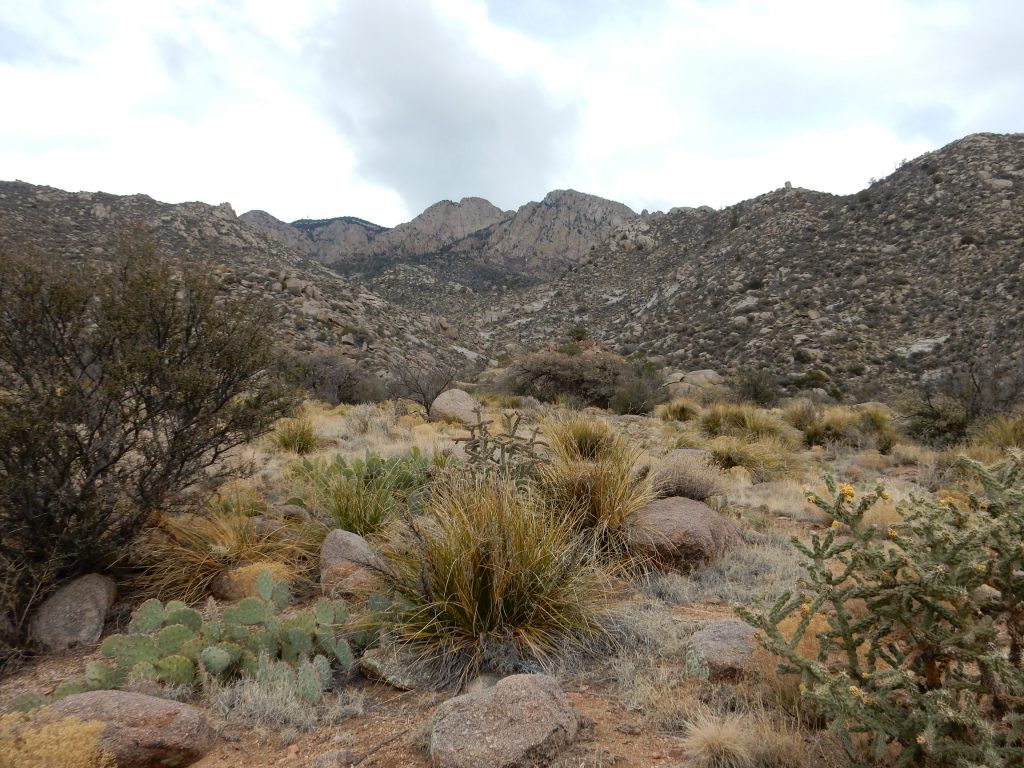 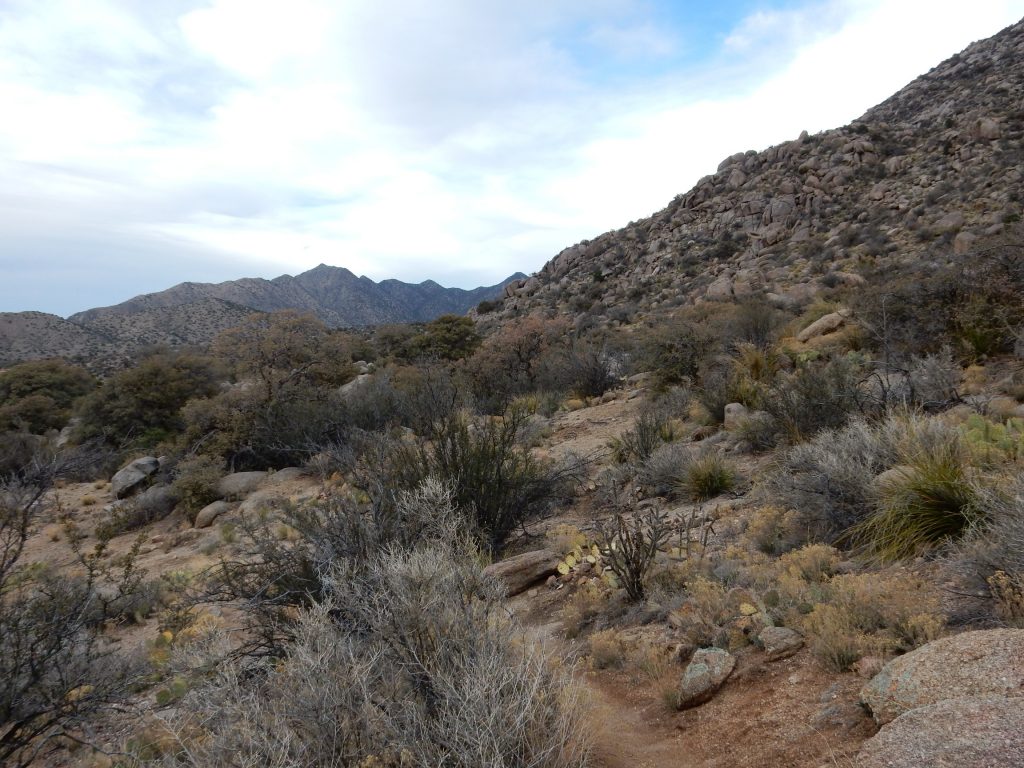 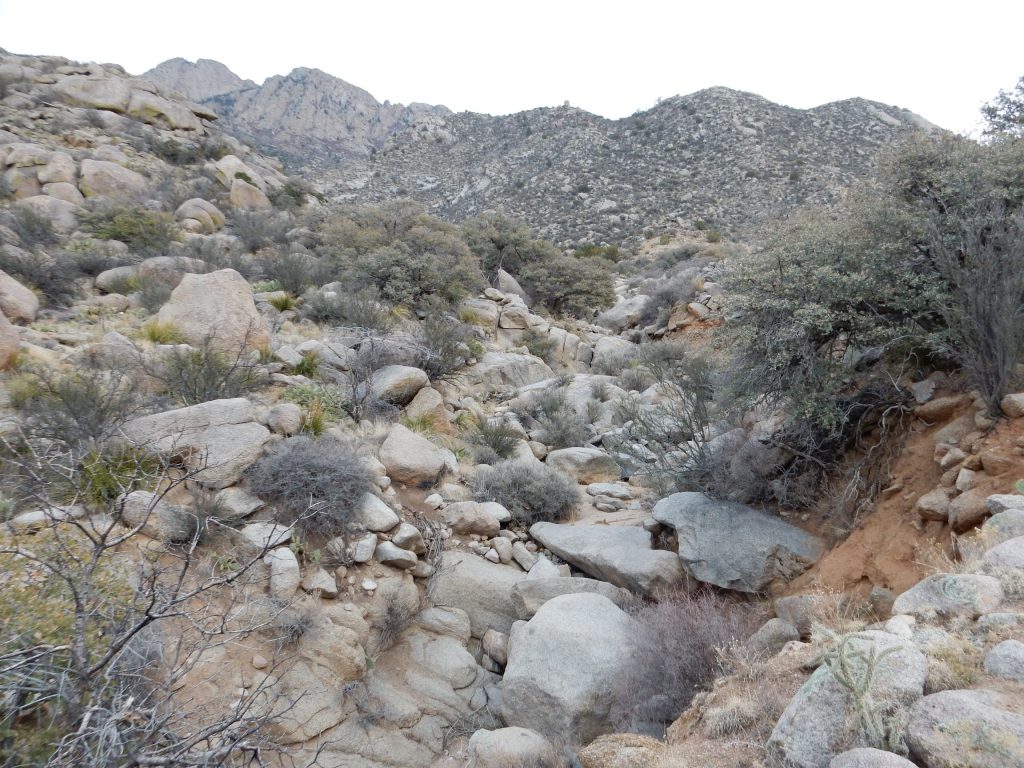 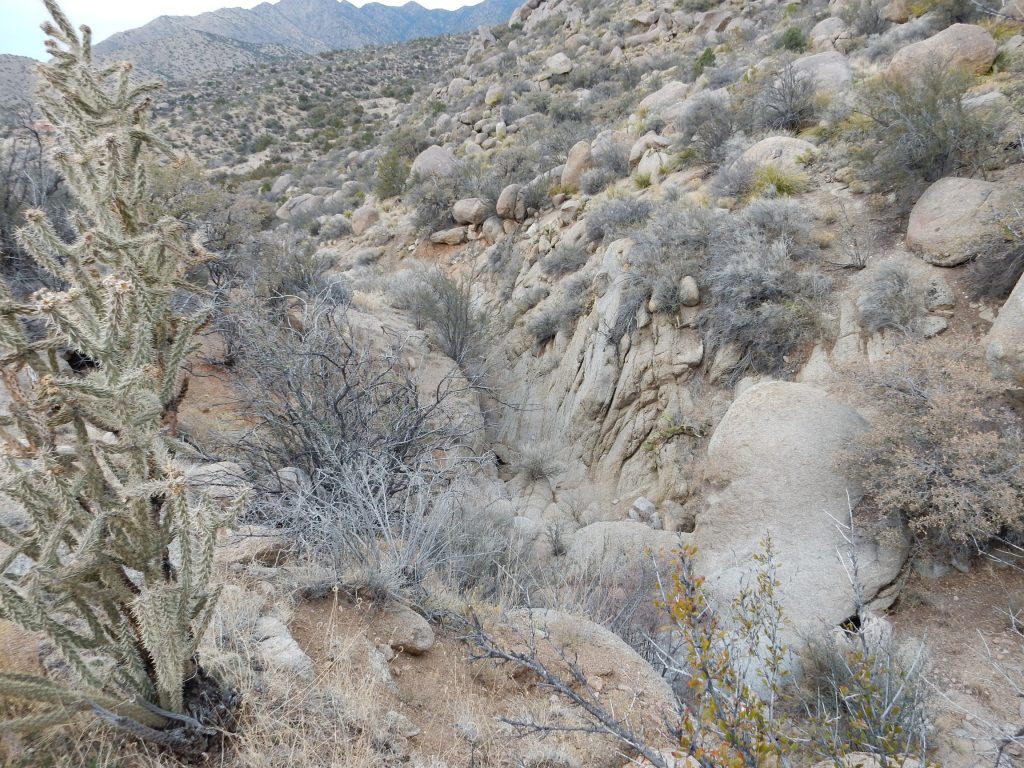 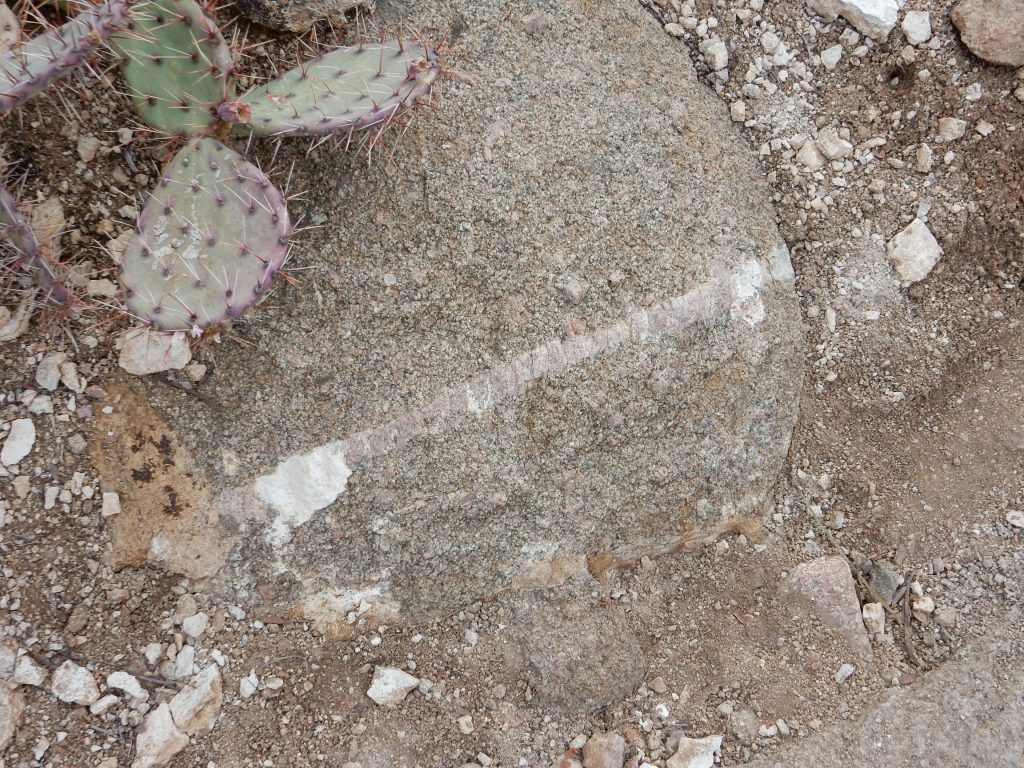 Pegmatite veins are very common in granite bodies, and vary in size from hairline to several inches thick. Beyond that size they are usually classified as dikes. They are composed of large crystals of very silica-rich minerals, often pure quartz but usually quartz plus alkali feldspar. Such pegmatites are described as simple pegmatites. Other pegmatites contain unusual minerals, some of considerable economic value for the rare elements they contain (such as lithium, beryllium, or tantalum), and may have crystals several feet in length. These are described as complex pegmatites. The pegmatite here is a simple pegmatite, as are most in the Sandia Mountains.

My cell phone buzzed. It was Nathan; his singles tournament was done and he was ready to be picked up.  I hurried back down the trail, but had to stop for one more photograph. 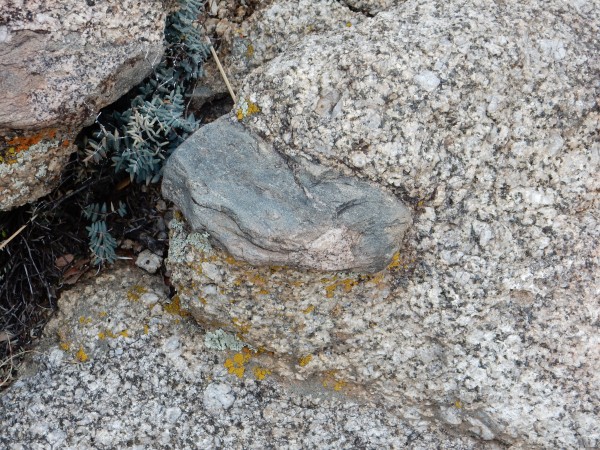 This is one for the book, because it’s such an obvious example of a bit of country rock engulfed intact by the granite magma body. You can easily see bedding in the original rock, which looks like it was a bit of schist.

I got back to the trailhead, drove to Nathan’s tournament, picked him up, and took him to Sweet Tomato for dinner. I was mildly disappointed; the wonton salad turned out to have a lot of rice in it (not healthy for a diabetic) and the soups, while excellent, mostly had pasta in them (ditto.) I had the chili, which looked healthy and was fairly tasty, then sampled some of the ratatouille soup, which was surprisingly good. Later they brought out a big vat of posole, and I was happy to eat some of that.

On the way out, I headed for the Walmart on Wyoming, missed Wyoming, made a long loop round on Eubank, and eventually found the place. They had just one carton of my favorite Blue Bunny no-sugar-added chocolate mint ice cream in the freezer, which is a flavor I can find nowhere else in reasonable driving distance of Los Alamos.

Then the hour and a half drive home.

There was just enough rain today that the trails are likely to be messy tomorrow. I will probably pick out a road log to follow instead. Haven’t decided which one yet, though I’m leaning towards one to the Truchas area. Any further north I hit ground that may be snow-covered, and I went south last time. The Truchas log features a distant deposit of Guaje Pumice that may be useful for the book.