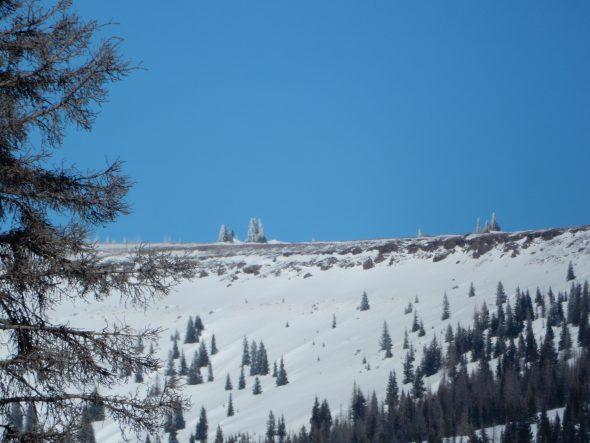 And, a final test of my camera before investing large dollars in a new one.

Gary Stradling called and asked if I was interested in doing a little snow shoeing while helping him pick up some equipment. Seems he was camping with his son in the snow up by Cumbres Pass in southernmost Colorado when the big storm (they’re calling it a “bomb cyclone”) came through this week. He was hustled out by the Colorado Department of Transportation, who would not even let him retrieve the rest of his gear.

We headed out yesterday morning. I brought both my old and my current camera with me, intending to see if I could get the current camera to focus a little better. I’d take pictures with both, with the old camera serving as a backup. I’d also try taking some pictures with my cell phone, something I’ve not experimented with much before.

We paused at the Puye gas station north of Round Mountain and I took my first photo with the current camera.

Well, that looks fine. Maybe I don’t have to shell out all that money after all. Except the GPS did not lock.

Round Mountain I’ve photographed many times before. It’s a volcanic vent of the Cerros del Rio field, probably around 2.5 million years old. The lava erupted here was basalt, which is low in silica (around 55%). Silica makes lava viscous, so basaltic lava is relatively low viscosity and tends to spread out rather than form high mountains. The lava cap of this small mountain was probably at ground level, and the softer sediments of the Santa Fe Group surrounding it were subsequently eroded away. This is not quite a volcanic neck, like Shiprock, but close.

Abiquiu Mesa is stunning with the recent light snow.

Here’s the version with the old camera. The old camera is working as well as ever, but uses a much smaller sensor and is inherently less sharp in its images.

The current camera picture does seem a bit out of focus, particularly on the right edge. Here’s a comparison of a blown-up image at the same scale.

The color and lighting are much better with the new camera; this is from the right edge of the image and the old camera has severe vignetting. But the resolution is similar. It shouldn’t be (the current camera should be noticeably superior.)

Still, I found myself wondering if the current camera is “good enough.”

Very pretty, even if the camera isn’t performing flawlessly. And I got a good geolock this time. Old camera:

The color balance and contrast are inferior, but my impression is the focus is superior. When I put up both photos in a viewer, it’s clear the current camera is having trouble focusing, particularly on the left side of the frame (same as last week’s hike) and the old camera is getting sharper images in spite of being a much older camera.

Ditto. Comparison in my viewer shows the current camera does color and lighting better, but its focus is definitely inferior again.

I won’t belabor this. The current camera definitely has a focus problem.

The geology here is that the very level surface in the foreground is cut into the Chinle Group, either Rock Point or Arroyo del Agua Formation. These are Triassic red bed formations, formed by the might Chinle River as it threaded its way from the southern Appalachian Mountains west to the coast in what is now Nevada. New Mexico was fairly low relief at the time, with some low ranges of the Ancestral Rocky Mountains that had not yet eroded flat. These formations are famous for their vertebrate fossils in this area, which include the famous Coelophysis beds at Ghost Ranch in the Rock Point Formation.

Rock Point Formation also makes up the lowest red beds of the mesa. The lighter tan beds above are Jurassic Entrada Sandstone, and above that is a thin grayish later of Todilto Formation. The Entrada Sandstone was laid down as a dune sea, and the Todilto Formation is composed of gypsum and other relatively soluble minerals deposited in a short-lived an arm of the sea. The slopes above the Todilto are Summerville and Morrison Formations, with a cap of Cretaceous Dakota Sandstone. The Summerville and Morrison Formations were laid down in a river plain, while the Dakota Sandstone marks a transgression or advance of the ocean across this area. The ocean reached from the Arctic to the Gulf of Mexico to form what geologists call the Western Interior Seaway.

We paused in Chama for lunch, and I got into some thermal pants loaned by Gary. I was now wearing my own thermal underwear, the loaned thermal pants, my own regular pants, a shirt and sweater. I would be plenty warm.

Even though there was plenty of snow.

The peak is almost exactly on the Colorado border. The beds partway up the mountain are likely Mesaverde Group, which marks a brief retreat of the Western Interior Seaway from this area. This formation is sandstone and mudstone with occasional coal beds.

We arrive at Gary’s camp, and start unloading. I put on outer waterproof pants loaned by Gary (I’ve now got five layers over my legs) but it’s feeling like a remarkably warm day, with all the sunshine, and I content myself with shirt and sweater. Gary also loans me two pairs of wool socks to go over my cottons, and with these on, I fit very comfortably in the size 13 snow boots I’ve borrowed from my son. I then figure out how to strap on the snow shoes Gary has borrowed from me from his own son.

We’re taking a selfie with Gary’s cell phone when a ranger stops by. He has a conversation with Gary. Evidently the ranger is unhappy that Gary left a large tarp and other gear at his camp site, but since Colorado DOT ordered Gary out and did not permit him to retrieve the gear, the ranger can’t really give him a citation. So he lectures him instead. Gary is respectful but obviously not keen on being lectured, given the circumstances. I can’t blame him.

We stomp down the road to where it passes Gary’s camp, carve a path through the snow bank left by the snow plows with a snow shovel, load up the sleds, and hike up to the camp. It’s hard work. Gary built an impressive snow shelter and we enjoy it for a few moments. The snow is at least seven feet deep here, and well packed below the surface powder. Then we hike around the area on the snow shoes. I may have used snow shoes once before, back in my undergraduate days at BYU as part of a church activity, but that would be over three decades ago.

We cross a ridge line, and see that the mountain across the valley is capped by some beds.

I’m torn. I have a lot of uses for $400 other than buying a new camera, and the deep telephoto shot looks fine. The new camera isn’t going to have that deep telephoto — a camera with everything I would like is well outside any reasonable budget. But there is also no doubt that unzoomed photographs are not focusing well, and panoramas are one of my photographic specialties.

The beds: My guess is that this is an outflow sheet from one of the calderas of the nearby San Juan field. Numerous giant caldera eruptions took place here around 25 million years ago; I spent much of my vacation last summer looking at them with Bruce Rabe. The map marks this as Pinorealosa Mountain, and the beds are clearly visible on satellite — they’re not an artifact of the snow pack. Extrapolating from the New Mexico state map, it looks like these are Datil Group ash flow tuffs — which tells me almost nothing except to confirm this is San Juan ash flows; the Datil Group takes in caldera outflow sheets across Arizona, New Mexico, and Colorado. But we’re south of the Platoro caldera here, which erupted the Treasure Mountain Tuff, so that is probably what this is.

Not bad — until you look at it up close. The poor focusing on the left side of the images is very obvious after Hugin does its best to stitch them together.

Gravel bed deposited on a surface eroded into the Ojo Caliente Member, Santa Fe Group. This is Pleistocene river terrace gravel, deposited by the Rio Chama sometime in the last 2.5 million years.

Each of these is the best focused of a couple of shots of the formation in question.

Gaah. The pictures are just badly focused enough to bug me. And given how these document my adventures hiking or driving into remote areas specifically to look at the geology, which is the biggest way I spend my summer leisure time, it’s probably $400 worth of bug. I hate spending the money but I just don’t think I can put up with hiking five miles into the mountains only to have half the pictures obviously blurry and the other half just blurry enough to bug me.