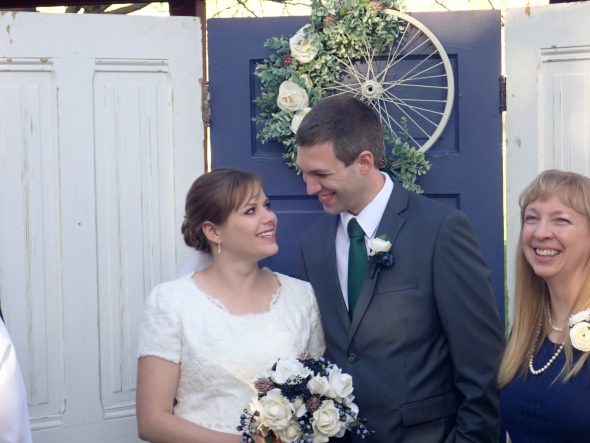 This installment is short on geeky geologic goodness and long on family togetherness. Feel free to skip to Day 6.

I am glad to have a chance to rest up at Mom’s. She is glad to have me there: She is almost 89, nearly blind, and recently fell and wrenched her back. Aging is not for wimps.

I had hoped to meet with an acquaintance from BYU, Professor Dan Peterson, to go see some geology. Alas, it is the end of the semester and his schedule is insane. However, he is able to make time for lunch and we have a great conversation. Among other things, I complain a little about Utah drivers. He replies that it does seem like a Utah driver’s license is a “license to kill.” I’ll post a rant about that later.

Afterwards I take Mom to Logan. The traffic in Salt Lake City is surprisingly awful for 3:30 in the afternoon. On the other hand, it’s Palm Friday, so perhaps I should not be surprise. I have a very near miss when the car in front of me abruptly slows and I can barely brake in time.

We need to be in Logan well before 5:30, so that we can be ready for Jeff and Kelsey’s wedding reception. They have the novel idea that the reception should be before the actual wedding so that the wedding day can be less crazy. I wish I had thought of it when I got married.

This will be less mystifying for Latter-day Saint Christians than for those of other faiths. An LDS temple wedding is a very private ceremony. Only the closest friends and family are invited to be present in the sealing room (the wedding chapel within the temple). The reception is for a much wider circle than the few invited to the ceremony itself, and it is often well separated from the ceremony in both time and space. My own wedding reception was two days after the ceremony and six hundred miles away, because at the time there was no LDS temple in New Mexico and we had to travel to Denver for the ceremony. Given that’s the case, switching the order is not as strange as it might be for a conventional wedding.

We arrive at my brother Scott’s house. Catherine, my youngest niece, who seems interested in geology, is delighted with a gift of a freshly quarried trilobite. So is her brother, Timothy. The older kids are kind of beyond the age of enjoying geeky gifts from Uncle.

We dress and drive out to the reception.

Mom is in the blue dress at center. She’s not completely blind; she can find her way around her condo and can generally recognize people she knows. But she can’t read or drive.

Behind Mom to the left are Craig and Jenni (yeah, I’ve heard all the Jenny Craig jokes, and so have they) and their son Henry. Jenni is Scott’s oldest daughter. To the right are Catherine (looking at the camera) and Bethany, Scott’s other daughters. Bethany is about to complete a bachelor’s degree in history and anthropology, which she seems to both be genuinely enthusiastic about and genuinely capable at.

My brother Scott and his wife Lisa are at right. Then (in back) Kelsey and her parents. Jeff has not formed up yet.

Jeff is an electrical engineer and Kelsey is working on a Ph.D. in some field of biology — I heard both botany and biochemistry but don’t know which was right.

Blasted backlighting is keeping the pictures from being as good as they deserve to be. Also, the viewfinder keeps fogging up, or something.

I get rather emotional at weddings.

The door backdrop gets moved and it helps.

I don’t know where Lisa has been — probably off troubleshooting — but she finally reappears.

I should be clear that I am by no means the official photographer. But it seems like you can’t have too many wedding pictures.

The notion that marriages performed in a temple by the power of God, and only those marriages, last into the eternities, is a central Latter-day Saint Christian belief.

One of Kelsey’s family, a young mother, is rocking her baby while looking into the distance with deep, soulful eyes. It will make a beautiful picture. Alas, she notices me before I can hit the shutter button.

Okay, I do slip in a little geeky goodness, because the view to the east is just too intriguing.

The canyon to the left is Green Canyon. The mountain to the east is, starting at the bottom: Cambrian Nounan Dolomite (largely hidden by the foreground trees and houses; a thrust fault; the Worm Creek Member of the St. Charles Formation, also Cambrian; the remainder of the St. Charles Formation, which straddles the Cambrian-Ordovician boundary; another thrust fault; the Ordovician Garden City Formation; the Swan Peak Formation, also Ordovician in age; the Laketown Dolomite making up most of the upper mountain front; and, at the very top, the Devonian Water Canyon Formation. Distinguishing the lower formation contacts from this distance is a bit tricky.

I try another builtin panorama.

Meh. The builtin panorama on this camera ain’t worth a durn. Not a big deal; I prefer stitching together panoramas from full resolution shots (using Hugin) anyway.

The reception line has emptied. I choose this moment to present Jeff and Kelsey with a freshly quarried trilobite. Yes, that’s extremely geeky, and I expect to get the hairy eyeball; but there’s a moral attached to it, which is about endurance and steadfastness. Kelsey surprises me:

Jeff, I think she’s a keeper.

Oh, and I got them a gift card as well. I do have one foot in the normal world.

Time to cut the cake.

The groom is also head of the stage crew.

The fellow with glasses is Timothy, my brother’s youngest son.

The traditional dance. (Traditional for Lisa’s family, anyway. I don’t recall any such tradition in ours.) I’m trying a couple of different formats here, because WordPress is not actually very good about home videos.

All in all, a very touching reception. Now all we need is the wedding.

Next: Logan Canyon. Also, a wedding.