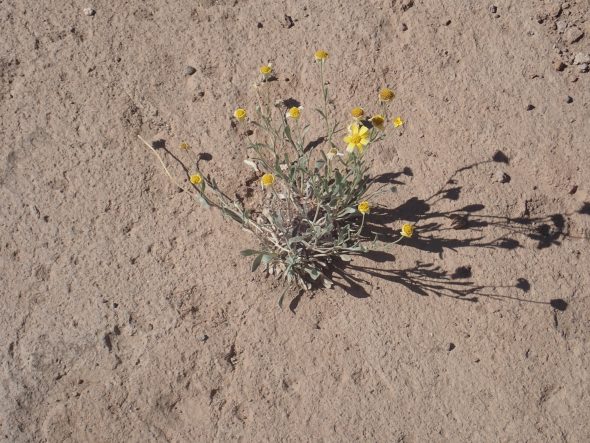 My first crack at this trail ended badly when I realized my camera wasn’t focusing properly. Repairs were not entirely successful and I ended up with a new camera. A subsequent attempt ran out of time. This time I had the whole afternoon, a working camera, and flawless weather.

Her proper name is Angel; she was my daughter’s tenth birthday present. My daughter is now 25. The cat is getting old and tired and sleeps a lot, even for a cat. My nickname for her was Ming the Merciless, but she’s mellowed, and Angel works for me too, now, too.

Off to the trailhead.

It’s an easy hike over level ground, but there is some geology worth seeing. Here’s the view into Water Canyon to the north.

The pink mesas are Tsherige Member, Bandelier Tuff. Readers who have been following me have heard its description many times before, but for new readers: This is an ignimbrite, a rock formed from pyroclastic flows from the Valles eruption 1.25 million years ago. This was a truly ginormous eruption, emptying a magma chamber ten miles across to produce the Valles caldera.

The magma erupted from this chamber was saturated with gas but was also rich in silica, which made it extremely viscous. When such magma reaches the surface, it basically explodes into a mass of red-hot gas and tiny fragments of volcanic glass. In the early part of the eruption, this mixture was buoyant enough to rise into the atmosphere, producing an eruption column that scattered pumice and ash up to 300 miles downwind. As the eruption grew in intensity, the mixture became so voluminous and saturated with ash that the eruption column collapsed, and the mixture flowed across the landscape for miles in all directions like a fluid. These were the pyroclastic flows. Once the energy of the flows was spent, the powdered volcanic glass settled to the surface to form a solid rock called ignimbrite or, less formally, tuff.

Under the Bandelier Tuff is dark layers of basalt of the Cerros del Rio. This erupted around 3 million years ago from fissures opened by the Rio Grande Rift, the great crack in the Earth’s crust that stretches from central Colorado to El Paso and roughly coincides with the Rio Grande Valley. This was a very fluid lava, low in silica, resembling the lava flows we see today in Hawaii.

I come across a particularly nice chunk of tuff.

Notice the nice big chunks of pumice, swept up in the pyroclastic flow. Because this is a loose boulder, I can’t be sure which eruptional pulse this came from, but a good guess is either the C or D beds.

I come to a hill that is almost certainly the D bed.

This is a good viewpoint for the next picture,so I climb. The hill is covered with bits of precaldera rock caught up in the Valles eruption, cemented into the tuff, and then weathered back out of the tuff.

The weather is perfect for the next panorama, which will replace an earlier one taken on a cloudy day for the book.

As with almost all images at this site, you may click to get the full resolution image. At center,there is a thick section of Tsherige Member of the Bandelier Tuff filling a paleocanyon in the Cerros del Rio Basalt. This was the canyon of the ancestral Rio Grande as it was 1.25 million years ago. When the canyon was filled with pyroclastic flows, a large lake formed in the Espanola area until the Rio Grande was able to carve a new course for itself to the east, at the current canyon location. Note that the old canyon was narrower and not nearly as deep.

I return to the trail which soon climbs a basalt knoll rising out of the Bandelier Tuff.

Here I see a boulder with visible crystals of augite.

Augite is a form of pyroxene, an iron-rich mineral found in low-silica volcanic rocks. It’s not particularly rare, and in any case it’s softer than the surrounding rock here so it can’t be chiseled out, but I’ve never seen it quite this striking in Cerros del Rio basalt.

And then I am at the trail’s end, where there is a magnificent view into White Rock Canyon.

Some close up views. First, cinder beds directly across the canyon.

A meander of the ancestral Rio Grande now plugged with Tsherige Member.

Montoso Maar is the valley at center, with many thin beds of cinder exposed. This was an early eruptive center of the Cerros del Rio, subsequently drowned in lava flows, which was then eroded out when the Rio Grande shifted its course east and cut into the maar. Montoso Peak is a younger eruptive center that produced high-silica basalt flows.

Another paleochannel filled with tuff.

The rock at left may have been part of a natural dam that blocked the Rio Grande 2.6 million years ago and formed a large lake, Culebra Lake, covering the Espanola Valley to the north.

Lots of lichens on the rocks here.

It turns out that lichenometric dating is actually a thing, though it’s highly imprecise. If you have some idea how fast lichens grow in an area, you can etimate how long it has been since a rock has been disturbed by how big the lichen colonies on it are. These suggest decades at least.

I start back but take the branch trail to Alamo Springs. I’m thinking of hiking down to the springs sometime when I have a partner, and I reconnoitered it once before — with a busted camera. Also, I wasn’t convinced I’d found the right way down.

I come to a cairn, and two trails.

The one to the right is the one I took before. I decide to explore to the left. It curves round and I realized it simply heads back to the powerline overlook.

I return and take the other trail, being careful to pay attention to cairns. I see that my previous reconnaissance missed the correct path,which becomes a narrow squeeze between boulders.

This is all Tsherige Member, Bandelier Tuff, up close and personal. The trail turns and crosses a bed of very coarse pumice.

This bed is a bit unusual. The Valles eruption began with air fall pumice,w which forms a thin bed at the base of the Tsherige Member, but it doesn’t resemble this at all. I may have to come back and take a closer look. The geologic map maps this all simply as Tsherige Member.

I think I see the way down this time. And it’s a good spot for a panorama.

Than pan didn’t come out as well as I expected; sun angle already too low. We’re looking into lower Ancho Canyon.

Veins in the Bandelier Tuff on the hike back.

Fractures filled with mineral deposits. Not actually that common in this formation.

Flower growing out of a rock.