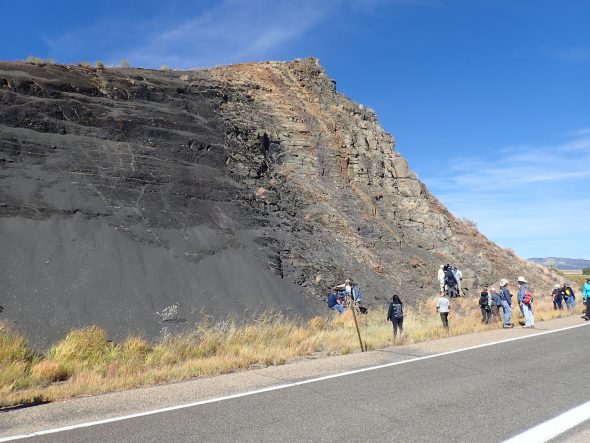 After breakfast, I inspect the hole Coonzilla ripped in our tent.

As the sun comes up, a large flock of buzzards circles to the south.

I don’t think the Benadryl agreed with the raccoon. >:~>

The wind has died down and the tent is more or less still standing. But with a corner ripped out, a suppord rod fractured, and the tent being older than my daughter (who is now running an editing business out of my home), I figure it’s time for a new tent.

The last day of the conference is a half day in which we drive ourselves. We rendezvous at the Des Moines rest area.

From there we head to Raton and I-25. The route passes many volcanic centers of the Raton-Clayton field, including Juan Torres Mesa.

At center is either a paleocanyon or the actual vent area for the eruption. It has enough of a dike look to it that it may, in fact, be the vent.

We turn onto I-25 at Raton and head south to the Tinaja exit. Here the group assembles to examine the Eagle Tail dike.

We assemble for anothe presentation.

The Tinaja dikes (which include the Eagle Tail dike and the Little Eagle Tail dike just to the south) are both basanite dikes, meaning that they are low in silica and highly alkaline. They aligned with both the Chico Sill complex to the east, which is also alkaline, and the Questa caldera a somewhat greater distance to the northwest. However, the age and composition are apparently all wrong for the dikes to be associated with the Chico Sill complex. The ages are not inconsistent with Questa, but it’s not clear the compositions are right. Also,they’re a long ways from Questa. We are invited to look for clues that the magma in the dikes moved horizontally rather than vertically.

Looking down a smaller dike just south of the main dike.

We move to the main dike and examine the dike rock.

I see no convincing pattern of preferred orientation in the hornblende needles that might indicate flow direction. However, Gary things there are signs of horizontal scouring in the hornfels (metamorphosed shale) of the dike walls, and invites me over to look.

I think it’s going to be difficult to distinguish any horizontal scouring from the original horizontal bedding of the shale.

The dike in the road cut.

The dark rock at left is the unaltered Pierre Shale, of Cretaceous age, through which the dike intruded. Some of our geology students find sparse fossil oysters, and I find a few pyrite grains. The shale close to the dike has been altered to brown hornfels, a very hard rock that is actually more resistant to erosion than the dike itself. The dike rock is medium gray and quite soft in many places, perhaps from post-intrusion hydrothermal alteration.

I visited this dike some years ago and found that one of my samples was obviously ferromagnetic. (A kitchen magnet will stick to it.) I mention this to a couple of the experts, but it is apparently not terribly remarkable.

The hard rock at left is hornfels. The dike material itself is quite friable, that is, it crumbles to the touch. I actually had a hard time finding any dike material that was solid rock here.

Lunch is provided, and then the conference breaks up. Having had a restless night, thanks to Coonzilla, Gary and I pretty much head straight home.

Still, a wonderful conference. I am looking forward to next year’s at Mount Taylor.