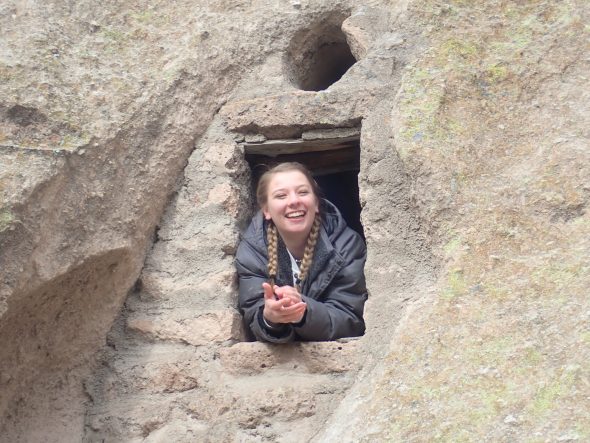 This has been an unusually pleasant Christmas season for me, in no small part because of the company of family and close friends.

My friend, Alden Stradling, has only just signed on at LANL, and so has not accumulated any vacation. This left him oligated to work Monday, in spite of his brother-in-law and family being in town to visit. Alden and Dorothy were very happy to have me lead the two families (minus Alden) on a hike at Bandelier National Monument.

Alden’s brother-in-law and his family, with some of Alden’s kids mixed in: Marian at far right, Aubrey third from left, and Liam in the back.

It was a fairly cold day, such that the trail was frozen solid. We took the trail to Upper Falls first, to avoid any chance of the trail thawing later in the day.

Log jams from the numerous flash floods in the canyon since the most recent fires in the area.

These are found at several locations along Frijoles Creek.

The maar beds overlooking the falls.

And, yes, that’s part of the gang at upper right. For scale.

The geology here is straightforward Around three million years ago, magma penetrated sedimentary beds here that were saturated with water from the ancestral Rio Grande. The resulting stream explosions converted both magma and sedimentary rock to fine cinders that piled up around the vent to form a characteristic bowl-shaped feature called a maar. This was subsequently buried by lava flows from the nearby Cerros del Rio volcanic field. The cinder forms the striking beds at center; the flows are the darker, coarser rock on top. This rock is a variant of basalt called benmorite, which differs from ordinary basalt in having a higher sodium content. It’s common throughout lower Frijoles Canyon.

The partially frozen falls, and Aubrey.

Falls typically form where there is a hard bed of rock to form the lip of the falls, with softer beds beneath that erode to form the cliff over which the falls, um, fall. Here the lip is benmorite and the softer beds are the maar deposits.

We return to the headquarters, then head north to see the ancestral Puebloan ruins. Along the way is an unexpected bonus.

A bull elk resting in the tall grass. Not a mule deer; the ears and face are wrong. Dorothy is delighted. It was one of her goals for the day to see an elk. To my surprise, the elk is apparently standing watch on elk-wife and children:

The cow is just visible at left. There are two calves near their mother, which I could not get a clear shot of. I did not know that bull elks remained with their mates and offspring; I was under the, apparently erroneous, impression that elk mating was of the “wham-bam-thank-you-ma’am” variety.

I find this scene oddly touching.

Tyuyonyi ruins from the trail to the cliff dwellings.

You can see a number of hikers at the ruins. I was a little surprised how many visitors were here this time of year. On the other hand, it’s a holiday week and much of the Lab are doing the same as me, and taking some vacation time to start the week early.

Of course, the great attraction for youngsters is the caveate dwellings and ladders thereto.

My understanding is that the current thinking is that the big settlements, like Tyuonyi, were largely ceremonial and trade centers, with quite a few of the rooms used for storage rather than dwelling. The row of kivas in the middle of Tyuonyi were certainly ceremonial in nature; more on that in a moment. Both Tyuonyi and the caveate dwellings have been extensively restored by the Park Service, and the ladders are of course quite modern (though intended to look like the originals.)

The caves started as small cavities. The current speculation among geologists is that the many small cavities in the rock here are a result of weathering. The rock is the Tsherige Member of the Bandelier Tuff, erupted from the Jemez Mountains to the northwest 1.25 million years ago. It erupted as a mixture of ash fragments and red-hot gas — a pyroclastic flow — that moved along the ground surface, destroying all in its path. The ash then settled to the surface and consolidated into porous rock called tuff or ignimbrite, in some places hundreds of feet thick.

This rock tends to form a hard rind when exposed to the elements. However, where the rind is broken or weathered through, the softer rock within quickly erodes to form a cavity, accounting for the spongy appearance of the rock outcrops. The ancestral Puebloans hollowed out the larger and more accessible cavities to form caveate dwellings, typically with a front room built from blocks of tuff and crude mortar with a roof of timber and wattle.

Both Tyuyonyi and the cliff dwellings were “urban.” The bulk of the population was scattered across the surrounding mesas and canyons, living in “field houses” of two to six rooms next to the fields in which they grew their crops (maize, beans, and squash.) With a gradually warming and drying climate, they were forced to abandon this area and move to more fertile areas close to the Rio Grande sometime in the 1500s — not that long before the Spanish arrived. This was not a people who vanished without a trace; their descendants now inhabit Cochiti Pueblo on the Rio Grande to the south.

Aubrey is very interested in climbing up to Alcove House after I describe the ascent. After talking it over, most of the rest of the family are interested as well. Dorothy’s sister-in-law takes the younger kids back to the headquarters to watch the Park Service movie while the rest of us make the hike.

An unusual exposure of Otowi Member at the bottom of the canyon.

The Otowi Member was erupted from the same area as the Tsherige Member, but 1.61 million years ago. It is typically relatively featureless compared with the overlying Tsherige Member in this area. The curvy ledges are probably zeolite zones marking the water level of a succession of lakes filling nearby White Rock Canyon. These were produced by landslides or volcanic eruptions that blocked the river periodically.

Such a landlslide could happen again and flood the entire Espanola Valley. This is one of the known geologic hazards that New Mexico state geologists have catalogued, and for which which our political masters have (presumably) made emergency plans. Fortunately, not a terribly likely event; the last such massive flood was around 12,000 years ago.

It’s really not that challenging, though the Park Service wisely recommends you not attempt it if you are in bad health or are nervous of heights.

The kiva here has, of course, been extensively restored by the Park Service. Kivas were the sacred spaces of the Ancestral Puebloans, who are reticent about describing their ceremonies even today. But it seems that, like many ancient temples, they were models of the Universe and the ceremonies recalled the beginnings of the world. There is some evidence that some kivas even had stars painted on their roofs, which represented the heavens above, and most kivas had a small pit or sipapu representing the way to the underworld through which the first humans emerged into the world.

A most enjoyable day. Thank you, Alden, for letting me borrow your family for the day.