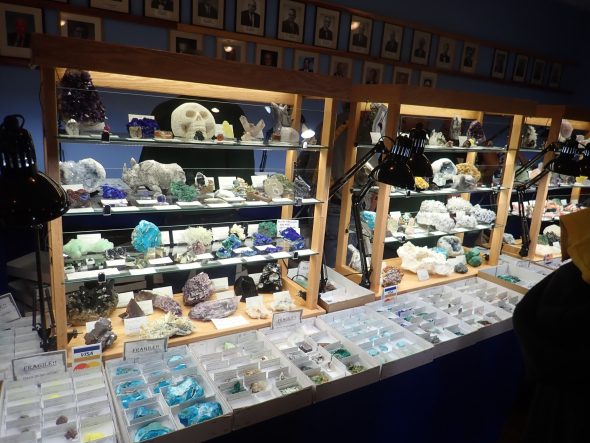 This weekend is the annual Earth Treasures Show sponsored by the Los Alamos Geological Society, of which I am a member.

I took a couple of hours Friday to help set up tables and tablecloths. The rest of the day was in Albuquerque, where I attended a service at the LDS temple and then went shopping for ancistrus catfish. These are a genus of suckermouth catfish, similar to plecostomus (and often marketed as “bristle-nose plecostomus”) but unlikely to get larger than about six inches. Whereas true plecostomus can get to be yuge, which is a problem in a 55-gallon tank. Acistrus (ancistruses? ancistri?) are just the thing to keep some forms of algae under control. I found none at the first stop, but there were ample at the second, and at a reasonable enough price that I purchased two. They seem to have settled in nicely. They’ve both survived their first 48 hours, anyway, and are obviously feeding well.

Ones this young look a lot like otocinclus catfish, of which I have several in the tank, but they are slightly spotted and have a very distinctive way of twitching their tails back and forth. They’ll soon be much larger than any of the otos.

Yesterday Cindy was off with Kira to a family party in Albuquerque. I needed to be home to look after Michael, our autistic son, but I was okay to spend some time at the show. (Michael is high functioning, understands how to call my cell phone, and it’s a 15-minute drive.) I photographed pretty much everything.

Here one gets a lottery ticket (I neglected to pick mine up) and can join or renew membership in LAGS. A bargain at $20 per family; I put in my renewal.

Silent auction items. As with most images at this site, you may click to enlarge.

Flourite, halite, vanadinite, and wulfenite. Nice samples, too. The starting bids are just within my budget, but I figure the bidding will quickly escalate out of my range. (And it turns out I’m right.)

Jennifer Marcy mans the Wheel of Fortune, which kids can spin to win a small mineral sample. To the right is the geode desk, which I’ll be manning later in the day. Here kids of all ages can pick out a geode, and the purchase price includes having it sawed in half on the porch out front. (Rick Kelly is manning the saw.) Geodes are cavities in a sedimentary bed that become lined with fine-grained quartz and, if you are lucky, have a central void space that becomes lined with beautiful quartz crystals. The quartz typically fluoresces bluish-green under a U.V. lamp from traces of ferrous iron.

Proceeds from the geode sales go to fund a scholarship for a student to attend the Fall Field Conference of the New Mexico Geological Society.

Cindy told me earlier that she would like some “rustic earrings.” Jade, turquoise, or possibly fire opal are her preferences. It’s rare that she asks me for jewelry, which I actually like buying for her, so this is an opportunity. The dealer in this photo has some beautiful fire opal studs that are within my budget.

This dealer has some rustic-looking (to my eye, anyway) turquoise pendant earrings, also within my budget.

On the off-chance Cindy reads this post before Christmas, I’ll wait until then to tell you what, if anything, I purchased for her.

There are always some excellent mineral specimens on display that are not for sale.

Tholeiitic basalt is not rare; it makes up perhaps 70% of the Earth’s crust. But that 70% is mostly in the ocean basins, and tholeiitic basalt is less common on the continents. There are some tholeiitic basalt flows associated with the Rio Grande Rift, the great crack in the Earth’s crust that reaches from central Colorado to El Paso and marks where the Colorado Plateau is pulling away from the interior of the North American continent. My house is built on basalt; I suspect mine is calc-alkaline rather than tholeiitic (both occur in the Cerros del Rio Formation of White Rock Canyon) but I don’t actually know.

This is a very nice display. It has pairs of mineral samples that look very much alike, but one of each pair is actually a pseudomorph, where one mineral crystal has been replaced by a different mineral while preserving the shape of the original mineral crystal. Often the replacement mineral is one that normally has crystals nothing like the mineral it is replacing.

It turns out sulfur is very good at scavenging iron and other metals out of rock, and many of the best ore deposits are sulfide minerals. Pyrite is iron sulfide; chalcopyrite is iron-copper sulfide; and galena is lead sulfide. Chalcopyrite is an important ore of copper and galena is the principal ore of lead. Pyrite is not an important ore of iron; sulfur is a very undesirable impurity in steel, and nowadays the principal iron ores are iron oxides. But it is apparently sometimes mined for its sulfur content.

All make nice mineral specimens, ranging from cheap specimens suitable as gifts for youngsters to splendid specimens far outside my budget. We had the whole range on sale at this show.

Our is not a large show, but it’s a nice one, and I’ve enjoyed it every year.

Meteorites. I was tempted but it pushed my purchase limit. I was also tempted to ask if any were from the Chelyabinsk meteor that exploded over central Russia in 2013, but the fragments were all labeled by origin and none indicated Chelyabinsk.

Chalcedony is microcrystalline quartz. Chrysoprase is a green variety of chalcedony enriched in nickel.

Patrick Rowe of LAGS usually has a nice set of display cases set up in the main hall. This year also, including shark teeth.

I have a pretty good idea where he found most of those teeth. A prime collecting site, which, alas, is becoming well enough known that it is likely to be pretty thoroughly worked over soon. However, shark’s teeth are not at all rare in Cretaceous sedimentary beds, so there will doubtless be plenty of other collecting sites.

This is from the Wild Cow Formation of the Madera Group, a Pennsylvanian formation around 310 million years old. While I have collected some shark teeth of my own, I only have one leaf impression (though a very nice one) from the Triassic, and some poorer ones from the Tertiary, and I wouldn’t mind hunting for seed fern impressions sometime.

These turned out to be more valuable than I expected. I have one large quartz crystal from the San Pedro mine, which I cleaned of iron staining by soaking it in concentrated hydrochloric acid; I though it was nice but not especially valuable, but now I wonder.

This is closer to my budget:

There are some nice galena cubes here for not too much, and I get one.

We usually have some large cabinets with museum samples (not for sale.)

And I arrive at the corner of the floor that has all the stuff in my price range.

I buy a few items, including gifts for young friends and others that will mysteriously disappear when I get home, only to show up in my Christmas stocking. On the off chance, I’ll wait and post photographs after Christmas.

And a very nice little nest of agnostid trilobites.

We normally think of trilobites as “bugs” that crawled the early Paleozoic ocean floor, but trilobites pretty much occupied every ecological niche they could get to. Agnostid trilobites were small, blind forms that likely floated with the plankton. I’m tempted, but it’s not cheap, and I have some agnostids already that I collected last spring.

Another feature of the show is the silent auction. Samples are set out, you write down your bids, and after a fixed time interval the top bidders get their samples. I picked up a nice chunk of barite; looks like calcite, but much, much heavier, enough to make an interesting specimen.

Home for lunch (for myself and Michael) and back for my shift at the geode desk. It may surprise you to learnt that I’m not much good at hawking rocks; I sold just four in two hours. However, one was to a young man who was there with his grandmother and (I assume) father,who persuaded Grandma to let him pick out a big $30 geode. It seemed a little lighter than the others that size, suggesting it might have a good cavity full of crystals. But it’s like thumping watermelons at the supermarket; you don’t really know until it gets cut open.

I found myself rooting for the youngster. It takes a while to saw the things in half; but about twenty minutes later he came back in the hallway with the two halves of his geode and his eyes positively glowing, and I knew his had turned out to be a good one. He came over and showed it to me. Yes, a nice big central cavity with a beautiful lining of quartz crystals. Wish I’d had my camera. (I left it home at lunch.)

My uncle, now long deceased, was a psychology professor who was a fairly avid amateur geologist on the side. Among his gifts to me and my siblings were some really nice geodes from western Utah. I still have two, one of which I keep in my office and the other with my collection at home.