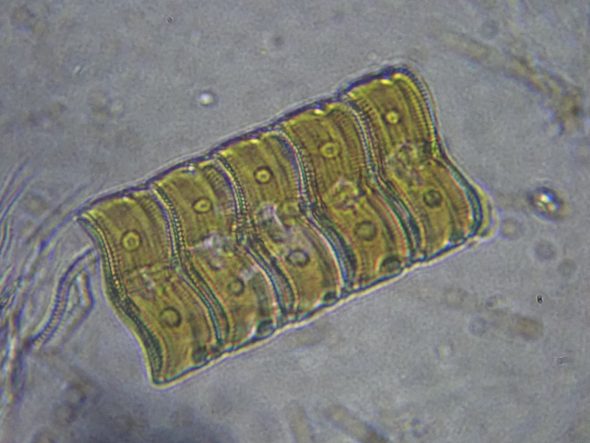 This is a hypotrich. It is a single-celled organism that looks for all the world like a little bug running back and forth on a dozen little legs.

(As with most images at this site, you may click to enlarge.)

It moves fast enough that it’s hard to get a good photo. Some very fast-swimming protozoa are even worse; I’ve seen lots of colpodas, but they’re about impossible to photograph.

This is apparentlyl the same species swimming freely.

Hypotrichs are a subclass within the ciliates, a phylum of protozoa that are covered with hairlike organelles called cilia. In the hypotrichs,the cilia form little tufts that work togther to act almost like legs.

The ciliophora are part of a group called the Alveolata, which in turn are part of the Sar or Harosa (the name is still being settled on), a kingdom of life that is neither animal nor vegetable. However, they appear to be slightly more closely related to plants that animals, which is a little unsettling when you watch one running around on its little legs looking for something to eat.

Diatom. There are gadzillions of species and telling one from another requires more expertise than I have yet, but my guess is Sellaphora or Acnanthidea.

Diatoms are also Harosa, but much more plantlike, and have chloroplasts with which to carry out photosynthesis. They have a test made of silica that has two valves that surround the body of the diatom and offer protection. The test is full of pores to allow water and nutrients through, and they can be beautiful under higher magnification.

Dunno if these are a new kind of diatom or mineral crystals. If they’re diatoms, they’d be Cylindrotheca.

A different kind of diatom, seemingly attached to the leaf with a stalk. Didymosphenia, I think.

Because of its tendency to form brown gooey colonies on rocks, it is popularly known as “rock snot.”

This diatom was gliding along.

Many diatoms are capable of gliding motion, but this was the first time I saw one doing it.

This is possibly a cylindrical diatom being seen from the side. Possibly Aulacoseira. The next may be the same group but at a different growth stage.

Acnanthes. A fairly large species of diatom I see all the time.

The long strip of diatoms is giving us a view of the diatoms from the side. Here we see single Acnanthes viewed from the side and the top.

Dunno what this is.

Most free-living amoebas belong to the Amoebozoa, which is more closely related to animals and fungi than the Harosa.

Paramecium, or something like it. You can see the feeding groove.

Paramecia are the white rats of the ciliate world, used by researchers around the world as model organisms.

Nematodes are the closest thing to us in the set of photograph here. They’re multicellular and definitely animals, but more closely related to insects than vertebrates.

Cryptocorynes are very popular aquarium plants, and I have several in my aquarium. You can just make out individual chloroplasts, the photosynthetic organelles, within each leaf cell.

A big patch of coelochate algae on a cryptocoryne leaf.

Sometimes known as green spot algae. The first land plants, liverworts, are thought to be descendants of coelochaetes, which they resemble. Here’s one scraped off the side of the tank.l

Here you see the shield shaped thallus of the organism, which looks very much like a primitive liverwort. The many small green specks around it are chloroplasts spilled from torn cells of the alga.

This looks like a reproductive structure with a holdfast.

Vorticella. Another ciliate. This one does not usually swim free, but attaches itself to a leaf by a coiled holdfast that can snap the main body of the organism out of danger with lightning speed.

Charcesium. These remind me of ripe dandelions.

They are relatives of Vorticella, but colonial.

Dunno. I saw a bunch of these on this slide. Not motile.

Vaginicola. This is a ciliate that secretes a little glass house for itself.

Rotifers. A whole congress of them, sitting there spinning their wheels.

Rotifers are animals more closely related to molluscs than to insects or vertebrates. The “wheels” are ciliated organs that sweep water through the mouth of the organism. When a food particle is swept in, it is swallowed and chewed up in a little gizzard whose motion is easily visible under the microscope.

More views of Vallisneria leaves. Vallisneria is another popular aquarium plant, one of the few true aquatics. Most aquarium plants are bog plants that can adapt to being submerged by growing a different kind of leaf. Vallisneria only has underwater leaves. Curiously, they have crassulacean acid metabolism, a way of storing up carbon dioxide in the dark that is usually associated with cactus and other desert plants. For cactus, the advantage is that they can open their stomata (leaf spores) in the dark, when water loss is minimized, and store up carbon dioxide for photosynthesis after the sun comes up. It turns out that most natural waters have their highest carbon dioxide concentration at night, so Vallisneria gains a similar advantage from being able to store carbon dioxide.

The chloroplasts within the leaf cells are big and imipressive.

This is a cyanobacteria, once called blue-green algae, until it was realized that they really are bacteria that have figured out photosynthesis — the first organisms to do so, actually. The chloroplasts in plants and true algae are thought to have started as a cyanobacterium that got engulfed by a larger cell. Both benefited from the relationship and eventually neither could exist without the other.

I took a crack at doing a stained smear of bacteria from my biological filter, using methylene blue stain, and using the oil immersion lens to view them. Oil immersion lenses are used for the highest magnification. The oil has a higher refractive index than air or water, and this helps give good resolution right at the ragged edge of what light waves can make out.

I fancy that blue string might be an individual Nitrospira. This is one of the beneficial species of bacteria that convert ammonia wastes from fish to harmless nitrate.

This might be how an Oscillatoria looks when stained, or it could be a fungus filament.

I think these were better focused for my eye. At this high of magnification, the camera starts to have a hard time focusing properly. I should probably invest in a proper microscope camera someday, instead of using an ordinary camera aimed through the eyepiece.

I see what looks like some big round cells with nuclei here. “Big” being relative; they’re very small cells.

Unicellular algae would be my guess. Something that likes dim light.

Back to a wet mount (a drop of water sample under a cover glass.) This I dunno; never seen anything like it before.

Ciliate of some kind.

This spherical critter was swimming slowly around, and you could see it rotating as it moved.

Maybe an encysted amoeba? I saw no cilia.

There’s one elusive little guy that I can’t quite get a good photo of. He’s very small, and swims along slowly using a flagella that sticks out in front of him. And he’s green. A euglenoid, possibly Peranema. He’s right and slightly above center, just visible.

Euglenoids are among the most primitive eukaryotes, organisms whose cells have true nuclei and other internal structures. Some are capable of photosynthesis, having engulfed a green algae cell that has take up permanent residence.

This one is pushed rather than pulled by its flagellum. That actually suggests something from a quite different and more advanced branch of the tree of life, closely related to animals and fungi.

These are rhizaria, yet another branch of the Harosa that are mostly amoebas with rigid pseudopods. Those are the “sun rays” you see in the photograph, from which this group gets its names.

On the larger scale of things: Office Cat.

My birthday toy: A CO2 regulator for the fish tank.

It took some fussing, but it now seems to be working well. The tank is looking nice.

I trimmed the big mass of hygrophila at right today. It was getting overgrown. I pretty much uprooted it all, took several healthy cuttings, anre replanted. The plants, in general, are flourishing, and although I lost a fish last week, the others are doing well.