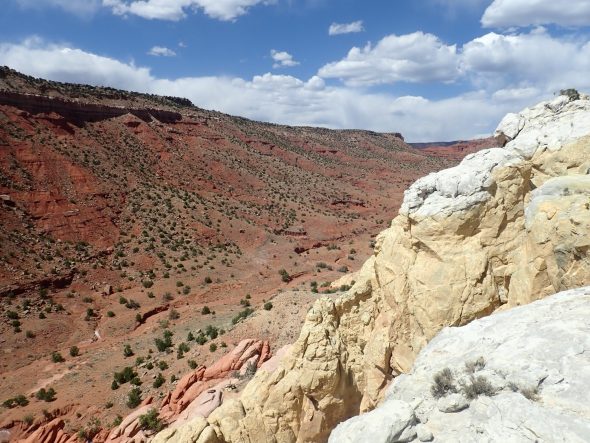 I was first introduced to this wonderful hike by Rick and Shari Kelley, along with many members of the Los Alamos Geological Society. It seems only fair to pass it along to my own friends, Gary and Alden Strading and their families.

Gary at left, Alden and Dorothy and their children at right. Rebecca, Gary’s’ wife, is still recovering from foot surgery and graciously declined to join us.

The trail head is reached from a short dirt road that leaves the highway west of Abiquiu just before you reach Red Wash. It’s almost exactly 3.5 miles from Bode’s General Merchandise and just a couple of hundred feet short of the wash. If you find yourself driving up the side of a cliff, you’ve gone too far.

The trail straight north is wrong. There are two trails to the northeast, and you want the easier one. I misremembered and took Gary up the steep one, but this turned out not to do much harm; it joins the other one later.

And, if you’re about to scold me about coronavirus: We took separate cars, I kept my 6′ separation from the others, and there was lots of disinfecting sunshine. There’s very little evidence that coronavirus is spread by outdoor activities.

The first 1.25 miles of the hike are pretty drab. It’s across terrain covered by lower Abiquiu Formation, regarded as Ritito Conglomerate by some geologists. This is a thick layer of gravel and boulders eroded off the Tusas Mountains when they were first thrust upwards, around 25-30 million years ago. I say “about” because these kinds of beds do not preserve any fossils that would help date them, nor do they contain fresh volcanic rock that could be radiometrically dated. We know only that the uppermost beds contain bits of Amalia Tuff, which is 25 million years old.

I amuse myself pointing out bits of Burned Mountain rhyolite, Vadito amphibolite, and Ortega Quartzite, all formations prominent in the Tusas. Gary is not terribly impressed; none are really worth collecting.

But then we approach the lip of the arroyo.

and the view opens before us.

As with most images at this site, you may click to embiggen.

The geology is worth some explaining. The cliffs are the eastern edge of the Colorado Plateau, a big block of crust that is slowly being pulled away from the interior of North America along the Rio Grande Rift. We’re standing in the Rift at this location, on rock beds that are much younger than those atop the distant cliffs.

The top of the cliffs is capped with resistant sandstone beds of the Chinle Group (Shinarump, Salitral, and Poleo Formations) laid down by mighty rivers flowing west from the young Appalachian Mountains, which were likewise high and rugged mountains in their youth, around 230 million years ago. This was a time of relative damp in the otherwise highly arid Triassic Period.

This area is called Arroyo del Cobre. Beyond the distant isolated mesa at right is Canon del Cobre, which is really spectacular but quite hard to get to. Here the Spanish had some small copper mines in the Shinarump Formation, which were probably worked by Navajo slave labor. (The historical record is murky.) The mines are, alas, quite hard to get to, but they gave this area its name.

The nearby knoll at left is Entrada Formation, 165 million years old, with a cap of similarly old Todilto Formation and much younger El Rito Formation. The Entrada Formation was a sea of sand dunes in this area, which finally buried the Ancestral Rocky Mountains. The Todilto Formation was a short-lived salinia or salty coastal lake that dried up to deposit limestone and gypsum. The El Rito Formation, guesstimated to be about 40 million years old (it has almost no fossils to date it), is quite clearly an alluvial fan eroded off the Tusas Mountains. To the northeast, close to the present mountains, it is very coarse and fills paleovalleys in the basement rock. Here it is somewhat less coarse, at least in its upper beds, and it becomes a fine micaceous sandstone around Canones to the southwest.

Panorama from a little further north.

The hill to the right again shows Entrada Formation capped with a distinct bed of Todilto Formation and a cap of (probably) El Rito Formation.

We take the trail along the escarpment to the west. Soon we are in view of some very colorful Entrada Formation beds.

The lower red beds are the more normal color of the Entrada Formation. The white to mustard yellow beds above were bleached by the anoxic waters of the salina that deposited the Todilto Formation.

Gary notices some interesting bedding in the upper Entrada Formation along the trail.

Thin bedding is unusual for the Entrada Formation, which was laid down as windblown sand dunes. My guess is that these features are diagenetic, formed after the sediments were laid down during the process of converting the sediments to hard rock. They likely have something to do with the overlying Todilto Formation.

There are some impressive nests of concretions in this area. Gary takes samples. There are also cryptogamous soils, soils cemented by cyanobacteria, fungi, and mosses. I am impressed and delighted to learn from Alden that Dorothy did her undergraduate thesis on cryptogamous soils.

The trail descends from here for some distance along the dip of the Todilto Formation. There is no gypsum in the formation here (it probably was present but dissolved away) but the underlying limestone beds are still present, and are somewhat resistant to erosion.

Gary looks for fossils in the limestone. They’re rare in the Todilto, but not nonexistent. Alas, no luck.

We find ourselves trailing.

Well, after all, Gary and I are both the sensible side of fifty.

Looking down into the arroyo to the west.

Air is gasped, pictures are taken, and rocks are flung. I meant to have the second picture show a dike climbing the cliffs, but it barely shows. (Click to enlarge if you want to try to spot it.)

We wondered if this might be a bit of petrified wood.

Alas, probably not. It’s Todilto Formation showing the varves, or thin layer of limestone, making up the base of the formation. Some geologist with too much time on his hands actually counted the varves, and, on the assumption each represents a yearly cycle, the formation was laid down in 14,000 years — just a blink of an eye geologically.

This caught my interest.

Big angular rock chunks embedded in the Entrada Sandstone. Gary was delighted to have an excuse to break rocks; we found that the clasts were all limestone. 160 million years ago, when this area was thought to be a level sea of dunes, somewhere nearby there was an outcrop of Paleozoic limestone that shed big chunks into a river or stream in this area. That’s cool enough to go in the book.

I lead our merry troop to where I thought the Canones fault trace was exposed. Turns out I headed too far south.

Dorothy has enough den mother in her to be disturbed that I am not following a clear trail. So Alden and Gary and I go find the fault trace on our own.

The fault trace is marked by the pile of find red sediments (fault gouge) between the yellow Entrada beds at left and the red Cutler Group beds at right. And, naturally, Gary is at fault. 😉

The displacement here is over 700 feet or 140 million years, depending on how you want to express it.

The white deposits are salt. There is a salty spring here, along the fault trace, with a sparse growth of salt grass. Alden picks up a bit and confirms by taste. I tell him my story of once picking up a pebble to taste-test the evaporite on it, and only then realizing I had just taste-tested an old deer dropping.

Gary finds some really interesting sedimentary structures in a block of sandstone.

There is a trail up the saddle to the south that passes a boulder covered with petroglyphs. However, the trail is hard to pick up. We skip it for today.

This may be another one for the book.

We’re looking at a big block of Entrada Sandstone that tells an interesting story. 160 million years ago, the Entrada beds were horizontal, and a horizontal layer of Todilto Formation (the gray rock at left) was laid down on top of them. Some time later, the beds were tilted nearly vertically, I suspect as part of the Laramide orogeny (mountain-building event) 60 million years ago. The beds were beveled flat, forming the surface at right, and then, around 50 million years ago, a layer of El Rito Formation was laid down on top. Then the beds were tilted again, less dramatically, so that the El Rito Beds dip gently to the right. This is evidence of fault reversal along the Canones Fault. Geologists see this in many locatgions in the West: The fault was upthrown on one side during hte Laramide, then thrown back down on that side during the subsequent Basin and Range extension of the area. The surprising conclusion is that much of the northern Rio Grande Rift was highlands as recently as 30 million years ago, only to founder into the rift as it opened. Every valley shall be exalted, and every mountain and hill made low.

We head south along a fairly clear trail, which finallly drops into the wash and disappears. However, there are occasional cairns. One is rather elaborate and ambiguous about whether we should continue along the arroyo or take a small trail to the east; this turns out to be a spur to a rock window.

Again, air is gasped, pictures are taken, and rocks are thrown (through the window.) This formed right on the contact between the El Rito Formation and the underlying Entrada Formation.

The arroyo crosses into beds of lower Abiquiu Formation/Ritito Conglomerate. Here there is a slot canyon in the very soft conglomerate beds, and I take some of the party to see it.

Amazingly, I can’t get a GPS lock, but about here.

And, from there, back to the cars and home. Not a bad way to spend a Saturday afternoon.