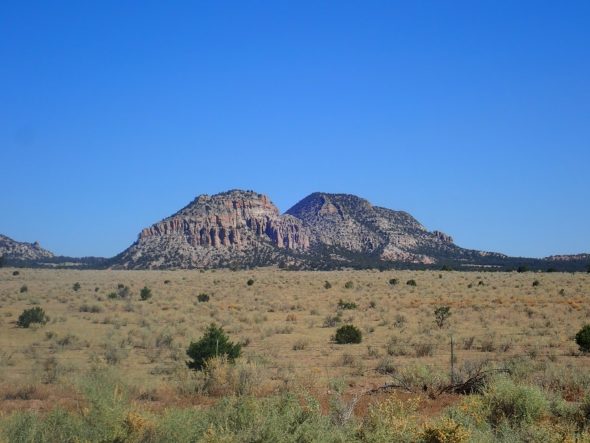 We awake to a distinctly chilly morning. Fortunately, all our subsequent camp sites would be at lower elevation and further south, and we would be warmer. The beautiful fall weather continues to hold.

We’re looking south across the eastern outskirts of town. (It’s not a big town.) The mesa is unnamed even on the topo map, but it is lower Spears Group under a cap of Fence Lake Formation. The Spears Group is volcaniclastic rock of the immense Mogollon-Datil volcanic field, which is around 30 million years old. The Fence Lake Formation is maybe half that age.

Volcaniclastic: This is a very general term for any geologic material composed mostly of fragments of broken volcanic rock. These particularly beds are sedimentary beds in which the rock fragments happen to be all volcanic and of roughly the same age and origin. Stuff eroded off the Mogollon-Datil volcanoes.

Let’s unpack the geology a bit. Yesterday most of our explorations were on the Colorado Plateau, a large region of crust that has somehow remained stable as everything around it has been deformed. The formations we saw yesterday were all classic Colorado Plateau formations. Today we’re venturing into the transition zone between Colorado Plateau and Basin and Range and will end up on the shoulder of the Rio Grande Rift. The transition zone was explosively volcanic around 30 million years ago, forming the Mogollon-Datil volcanic field. A vast amount of volcanic material was erupted over a considerable patch of west-central New Mexico.

We do breakfast: salad for Gary (who is trying to lose weight) and bacon, eggs, high-protein oatmeal, and diabetic shake for me (I’m trying not to lose weight, or at least not muscle weight.) We pack up, then explore the area. The hill immediately to our north is underlain by the same sequence of Fence Lake Formation over Spears Group. The Spears Group beds are bits of volcanic rock in an ashy matrix. This includes a very pretty porphyry, probably dacite:

This may be a densely welded tuff.

There’s apparently a smear on the camera lens. Alas, this will be on and off with me the rest of the trip.

A welded tuff that has shattered into thin plates.

Somewhere here the rock transitions from Spears Group to Fence Lake Formation. However, I’m unaware of this and do not look for a contact.

We head out, stopping in a road cut in lower Spears Formation.

The top layer is very young sediments; possibly Fence Lake Formation, of which the map shows a tongue in this area.

There is a prominent dike just west of Pie Town.

The dike is alkaline basalt, typical of areas where the crust has been stretched and small volumes of magma have been generated and come to the surface. It intrudes Eocene Baca Formation:

Baca Formation is red to begin with, but it may be further reddened here by baking. The basalt is very uniform and fine-grained.

Here is the contact with the Baca Formation sediments.

The soft red sediments have been baked into a much harder grey rock called hornfels.

Closer view of the Baca Formation.

I climb the dike and look across the highway at the continuation of the dike on the other side.

We drive on. To the south, Alegres Mountain.

If I’m reading the map right, this is capped with Bearwallow Mountain Andesite, 26.1 million years old.

We stop in Pie Town. Gary believes that one cannot go through Pie Town and not get some pie. Alas, the restaurant is closed on Tuesdays (COVID), though they do permit us to use the facilities and offer to sell us a whole frozen pie. (Gary declines; that doesn’t sound like anything special and we have four more nights on the road.) It’s a shame; I may have to go back when they’re open, just for the experience.

It turns out the restaurant has been here, serving pie to local cowboys and ranchers, since the 1930s.

We continue on. Soon we are passing by the Sawtooth Mountains.

This is all underlain by the Dog Springs Formation of the Spears Group, which rests on Baca Formation. I have a road log for this area; it recommends a side trip into the hills to see spectacular soft sediment deformation in this formation.

We are navigating by the seat of our pants, and our first stop turns out to be a long ways from the best views. We meet some pinon nut harvesters out gathering in the bounty. I find a few nuts myself and eat raw pinon nuts for the first time in many years. Our navigation finally unsnarls itself and we find the road to the outcrop in the road log:

It’s a reasonably pleasant spot and we eat lunch, giving the sun time to better illuminate the cliffs. The rock beds here are fantastically twisted.

The Dog Springs Formation is famous for these sedimentary structures, formed by debris flow deposits slumping on the underlying Baca Formation beds. The sharp contact halfway up is a so-called detachment fault. These nearly horizontal faults may form in a number of ways, including as ordinary steep faults that are later rotated by tectonic forces. I don’t know the likely formation mechanism here.

Another fantastic formation to the north.

Nearby is another picturesque dead tree

and a striking live one.

I’ve seen bark like this in areas subject to fire. I don’t know if that is the explanation.

We climb up to the cliff face.

where we see the fantastic beds up close.

View to the west.

You can make out the distant Baca Formation beds under the Dog Springs Formation.

We begin picking our way down. Cacti constitute a road hazard.

We head for Magdalena. There is an impressive road cut of what looks like tuff.

Alas, I can’t tell you what this is. There is no high-resolution geologic map for the area, and the closest I can come is something in the Datil Group.

We found this striking.

The cap is mapped as porphyritic andesite of White House Canyon, of the Datil Group, of Oligocene age.

The onto the Plains of San Agustin and the Very Large Array.

This one you’ll definitely want to click for full resolution, to see the antenna dishes. The VLA is a radio telescope which, at shorter radio wavelengths, can produce remarkably high-resolution images of objects.

The Plains of San Augustin appear to be a small rift valley branching off the main Rio Grande Rift valley. The crust here is thought to have been softened by all the volcanic activity of the Mogollon-Datil volcanic field around it, allowing it to stretch more easily.

We pass some Precambrian rock in a road cut.

Or so I thought. The geologic maps all agree that this is actually an extraordinarily densely welded rhyolite ash flow tuff. I would have sworn it was an augen gneiss.

Augen gneiss has a similar composition to rhyolite, but shows little “eyes” of feldspar. I thought I saw such eyes here, but they’re actually igneous phenocrysts.

At one point, there is an obvious amphibolite dike in the formation.

Magdalena Mountains to the south.

Further north is Ladron Peak, quite striking from this angle.

This is mostly ancient Precambrian rock, uplifted as part of the western margin of the Rio Grande Rift.

I have only a poor preliminary map to go on, but this is likely Popotosa Formation, of which we’ll see much more later. It’s the oldest Santa Fe Group rift fill formation in the Albuquerque Basin, here seen at the very southernmost limit of the basin. It rests on what I took for Precambrian rock.

We were somewhat pressed for time by now, or I might have taken a closer look and realized the lower beds are volcanic. This is the Luis Lopez Formation of the Mogollon Group, around 29 million years old.

On to Socorro. We refuel and find a Wal-Mart where we can grab a few groceries, some wooly socks for me, and other supplemental supplies. Then off to try to find our camp site; the instructions seem clear enough but we quickly get lost. (We’ll later find the instructions were not as clear as they seemed.) Gary pulls out his laptop; three bars. Excellent. He spends about half an hour making sure his report to the state is in and recorded, then we Google up directions to our campsite. We finally arrive at Canoncito de las Cabras:

Popotosa Formation again, at one of its reference sections. The road just west of here is posted as private land (“KEEP OUT”), but here there is a pull out with ideal flat ground for camping on BLM land. We set up camp, there’s no one within miles, and it’s a warm night. I’d say this was my favorite camp site of the trip.

We eat dinner, enjoy the stars and some more of the Expanse audio book, and turn in.