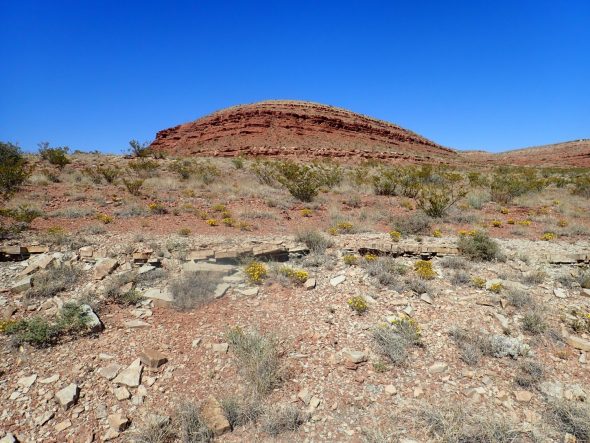 We awake from a pretty good night’s sleep, and find it a relatively warm morning. Gary is enjoying his hammock.

It does seem like just the thing, at least in good weather. It may not be so great in the rain, where it would be a bit large to fit into a tent. But we had hardly a cloud the whole trip, and I never even set up my rain fly on my dome tent.

Sunrise on the Popotosa Formation.

I would like to have explored the further beds, but they were past the posted part of the road. Had I but known, the jurisdiction map shows that they’re actually on BLM land. The private land is the square immediately to the south.

Breakfast, and pack, and we explore a little.

I see a mud layer among the conglomerate.

The canyon walls look scalable near here. I scramble up.

This, too, is Popotosa Formation, but a muddier, less well-cemented portion. And apparently private land.

I climb down, we pack, and we drive back into the Rio Grande valley.

And getting back to the freeway is easy. It turns out we turned under the freeway from the frontage road about a mile too soon.

We head to San Acacia, where I want a photograph of the Sierra Ladrones Formation at one of its reference sections.

The reference section is the southeast slope of the hill capped with lava. Alas, the gate that is wide open in the Google Maps view is now locked with No Trespassing signs. I get as close as I can, but I can’t see the type section at all; just a slump block on the south that is highly unsatisfactory.

We spend some time trying to find the road to Mesa del Yeso. It turns out that the road sign shows a different road name than is labeled on Google Maps. But once we find the right road, it is a very interesting drive out to the type location for the Yeso Group. There are some other interesting beds along the way.

My wild guess is that this is all Popotosa Formation on the east side of the rift. Turns out it’s the younger Sierra Ladrones Formation, showing intertonguing axial and piedmont deposits. Axial: These are river bed deposits, showing the Rio Grande had integrated through the Albuquerque Basin at this point and was now flowing out to the south rather than drainining into a closed lake. Piedmont: These are all the alluvial fans and such that were deposited at the feet of the mountains surrounding the basin.

Well, given that the type area for the Sierra Ladrones is on land now off-limits as a wildlife refuge, and the reference section is apparently locked out due to beats me, this is the closest to a type section photo of this formation I’m going to get.

And then we’re at the Yeso Group type location.

It’s pretty typical Permian redbed rock, deposited in an arid climate with practically no organic matter in the sediments and high oxidation that converts all the iron minerals to red hematite. There are also some limestone and gypsum beds, but they’re pretty minor. This looks a lot like the formation it sits on, the Abo, enough that I carefully checked the location to be sure I was looking at the right rock.

Just in case I’ve misidentified formations, I take photos of other likely formations.

It turns out that, according to the geologic map, the white cap is mostly San Andres Formation. There may be a sliver of Glorieta Sandstone between the San Andres and the Yeso, but it’s not mapped here.

The latest geologic map shows this as San Andres Formation over Glorieta Sandstone over Yeso Group. The precise contacts are hard to make out at this distance.

We eat lunch, then begin exploring. The Yeso is not known for its fossils, but we might get lucky looking at the thin limestone beds at the very base of the group.

I may have worked far enough south to reach the top of the Abo Formation. This looks like mudrock with desiccation cracks.

Gary has found something and calls me over. Not fossils, but crystal casts.

I find one of my own.

The best crystal casts are in the upper left part of the slab. You can see the distinctive shape of hoppered halite crystals. Halite, table salt, forms crystals shaped like cubes, but under some conditions the faces are hollowed out. These are described as hoppered crystals. They seem to be a common feature in salt flats. The crystals here dissolved out and were replaced by limy sediment to form crystal casts.

On the way out, I take a couple more pictures.

This line of hills apparently marks a major structural feature, the Parida Structural Zone, which is a zone of faulting and tilting. You can see that the beds are tilted steeply west here, whereas the mesas just to the east are almost level. The white beds are all San Andres Formation.

One more shot on the way to the interstate.

I’m thinking this is an ash bed from the Toledo eruption in the Jemez 1.62 million years ago. There are some such beds in the Socorro area. However, the geologic map doesn’t seem to think it’s anything special. It’s labeled as the upper axial-fluvial facies of the Sierra Ladrones Formation; that is, as younger river channel deposits of the Rio Grande Rift.

Then south to reach Lake Valley before dark. We do divert briefly into Elephant Butte Reservoir; I’ve never seen it before.

Elephant Butte is a volcanic plug protruding through beds of the Cretaceous McRae Formation. The water level is quite low; you can see the series of bathtub rings around the butte and in the canyon walls near the dam.

The rock here is Mesaverde Group, also Cretaceous in age. The top bathtub ring is nearly at the overflow level for the dam; it looks like the dam is rarely anywhere near that full.

On the plus side, the low water exposes a lot of McRae Formation. On the minus side, bathtub rings. The second will have to do for Wikipedia.

View of twisty beds in the Caballo Mountains.

Once again, I have no high-resolution map of this range; the state map tells me only that the northern Caballo Mountains are capped with Pennsylvanian formations, which I had already guessed. Extrapolating from nearby maps, I’d guess Nakaye Formation over Red House Formation.

The foreground bluffs are Palomas Formation, the younger Santa Fe Group formation in this part of the Rio Grande Rift.

It turns out the foreground ridge at right is the type section for the Palomas Formation. But we’re in a rush, and there’s what looks like an even better exposure to the northeast.

We arrive at the Hillsboro exit, and I get a panorama of mountains for which I at last have a detailed geologic map.

The uppermost white beds, some 200 feet thick, are Nakaye Formation, which is a Pennsylvanian cyclic limestone. The darker beds forming a slope below this, including in the notch just below the peak, are Red House Formation, also Pennsylvanian but richer in shale. The lighter rock below the Red House Formation forming the shelf just below the peak is Ordovician Montoya Group dolomite. Below that are white beds of the El Paso Formation, also Ordovician in age, and the dark band at the very base of the cliffs is the Cambrian to Ordovician Bliss Sandstone. Below that are various Precambrian granodiorites and metamorphic rocks, with a distinct red tint showing through the vegetation cover.

Brushy Mountain shows the same sequence of formations, but with one addition.

There is a very thin dark band just above the Montoya Group dolomite beds and below the dark slope-forming Red House beds. This is the Fusselman Formation, which pinches out at about the latitude of Burbank Canyon and so is not present in Timber Mountain. The Fusselman Formation is Silurian in age.

We head for Hillsboro, racing the sun, but we stop for a limestone outcrop.

Turns out these are generic Pennsylvanian limestone beds, and all we find are a few bryozoan fronds.

And when we fire up the car, the engines sputters alarmingly. It’s quite a hot day and we just refueled; vapor lock. The car eventually settles down and quits sputtering and we have no more trouble, but it keeps me from having Gary drive us to the Percha Shale type section. Which is just as well; I see now that the coordinates I had for it are too far east, and we’ve had expended significant effort to photograph boring young sediment beds.

We drive on, engine gradually returning to normal, and pass through Hillsboro and south to Lake Valley. The ghost town has a gate and it’s locked; shucks, I was hoping to camp here. But at least the gate promises to be open the next morning at 9:00. We head further south, find a side road, and there is some flat ground on BLM land for setting up camp.

BLM: Bureau of Land Management. Federal land that Gary describes, not altogether inaccurately, as land so useless no private citizen or other Federal agency wants it. In general, you can do pretty much anything reasonable you want to on BLM land, including casual rock collecting and overnight camping.

The hill in the background is called Monument Peak or Lizard Hill, depending on who you ask.

This turns out to be Rubio Peak Formation. This is intermediate (in silica content) volcanic rock of the Mogollon-Datil volcanic field.

We’re really in the middle of nowhere.

The wind comes up and my tent is flapping. I’m tired and I don’t think I’ve drunk enough water, so I’m not in my best frame of mind, and I’ve never much liked wind. Gary patiently repositions the car to block some of the wind and it mercifully dies down halfway through the night.

Next: Mines and reefs