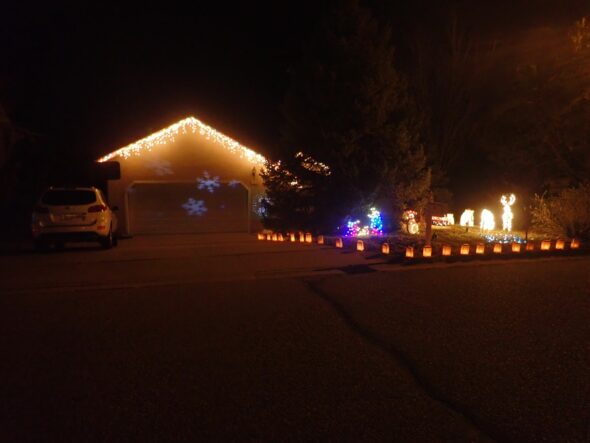 This will be more or less an odds and ends post.

I took the week of Thanksgiving off work, and did a bit of hiking. New ground for me was the lower Water Canyon Trail.

As you can see, there was still a little snow on the ground.

A nice view of a mesa of Bandelier Tuff.

Long-time readers will have heard my usual explanation of Bandelier Tuff. For new readers (Welcome!): The Bandelier Tuff is the iconic rock of the Los Alamos area, which forms numerous finger mesas, so called because of their elongated shape. The Bandelier Tuff is formed from volcanic ash erupted between 1.85 and 1.25 million years ago, in at least three enormous volcanic eruptions from the central Jemez Mountains. The beds here are part of the Tsherige Member of the Bandelier Tuff, erupted in the most recent enormous eruption, 1.25 million years ago. This eruption emptied an underground magma chamber to produce the Valles caldera.

The ash was erupted as a red-hot mixture with volcanic gases, which formed a pyroclastic flow. The ash remains suspended in the gases and make the flow heavy enough that it hugs the surface, spreading out over the landscape, often for miles. When its heat is exhausted, the ash settles to the surface and consolidates into a soft rock called tuff.

You can see several layers of ash in the photo that represent individual eruptive pulses.

Further down, I came to a massive cliff of Bandelier Tuff.

I hiked closer for a better view.

This is an unusually thick layer of tuff for the White Rock area. This suggests the tuff fills a shallow valley that existed before the eruption. Notice also the faint layering towards the top; this is likely where the water table stood shortly after the eruption, when White Rock Canyon was dammed by pyroclastic flows and a lake filled the entire Espanola valley.

By contrast, here is a point further down

I could just make out some sediment beds between the two layers of tuff, but the photograph didn’t come out well.

December 23 was the great conjuction of Jupiter with Saturn. Jupiter was lined up with Saturn more precisely than has happened since 1623. Both planets fit comfortably in the same field of view of my telescope.

Not a great photo; my camera is really not set up for astrophotography. But you can see Jupiter with a couple of its moons just visible, and Saturn with just a hint of its rings below and to the left of Jupiter. Cindy thought it was pretty cool, but I coulnd’t get the kids interested in coming out to take a look. It was a very cold night; we’ve had very cold (if dry) weather the last couple of weeks.

Christmas decorations at our house.

Me, in my new Christmas sweater.

And here’s a weird one: Cindy looked out the back window and saw what she took to be a dead animal on our deck.

It was a fox, curled up and napping. I could see its chest rise and fall, and every now and then an ear twitched. I came back a while later and he had rolled over to nap on his other side. I was a little worried he was sick (this doesn’t seem like normal behavior) and Cindy was wondering if I should call the wildlife rescue people. But, come dusk, he woke up and headed out.

It will be interesting to see if he comes back to nap on our porch again tomorrow morning.