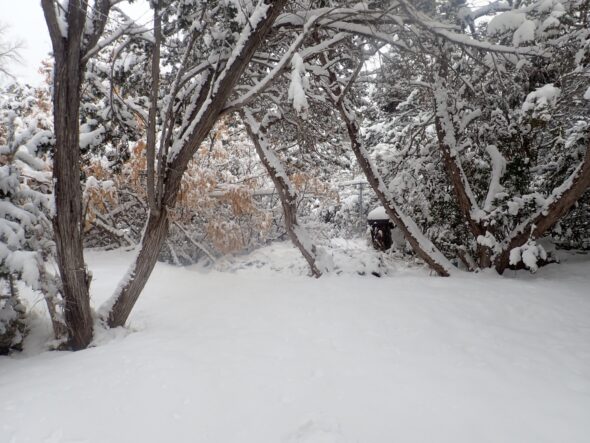 Which is still too far away.

That’s my back yard this afternoon. The temperature is 15 F. We got about five inches of snow last night, and I obviously won’t be doing any hiking any time soon.

But I don’t mean to complain . This is the stuff that helps ensure the forest won’t be closed down due to fire danger, come early summer. And by then, perhaps, I’ll be vaccinated against COVID and can think about taking a long vacation to visit my mother and see some geology. Still want to do that Arizona trip I planned for last year and had to cancel.

From my sister. This is Shot #2. I’m hearing that it really floors a lot of people, because of the strong immune response built up by the first shot, so Lori is monitoring Mom fairly closely.

Meanwhile, a couple of weekends back, I got sufficiently cabin feverish that I took a hike along Burnt Mesa at Bandelier. I’ve been here before just once and not all the way to the trail’s end.

The trail is notable for passing close by a number of field houses.

Field houses were small dwellings built of of tuff and adobe brick by the Ancestral Puebloans around the 14th century. They were not more than four or five rooms, and likely only one room was for human occupation; the others were for storage. They were built close to the fields being tilled, hence their name. The big famous ruins, like Tyuyonyi, were probably ceremonial or political centers that did not house the bulk of the population.

And if this area doesn’t look exactly like lush farmland to you, keep in mind the evidence is solid that the climate was significantly wetter in the American Southwest seven centuries ago.

This one is a bit ambiguous; there’s a pile of what look like they may be tuff blocks, but it could just be a pile of natural boulders.

This one is not ambiguous.

The footing of a wall is very clear. I was careful to disturb nothing and take nothing, as you should be if you visit this spot.

This one is also a bit ambiguous

though the presence of a marker stake suggests another field house.

This is probably just a pile of boulders.

All these sites are just off the trail. The Park Service discourages bushwacking in this area.

It’s an overlook of sorts, with no continuation of the trail down to the canyon floor. Further down, this joins with Frijoles Canyon, but the confluence is a precipitous drop.

(Click to enlarge, as you may do with almost all images at this site.)

We’re looking southeast towards the confluence with Frijoles Canyon, the deep canyon in the middle distance. This whole area is underlain by the Bandelier Tuff, a thick layer of volcanic ash deposited as pyroclastic flows from two ginormous eruptions in the Jemez Mountains, 1.62 and 1.25 million years ago. On the skyline is the basalt and andesite of the Cerros del Rio, a kind of satellite volcanic field to the Jemez Mountains, erupted around 2 to 3 million years ago. The flat peak at right is Cerro Colorado.

There were a fair number of others on the trail, including a large family at the lookout point. I had my mask, fortunately, and made a decent effort to keep up the social distancing. (Though, in the outdoors with lots of disinfecting sunshine, I’m not terribly worried.)

Odds and ends: I mean to finish the book this year, for some value of “finish”. I worry it’s not publishable as a print book, and I know very little about electronic publication. Really, I don’t expect to make large $$ off it; I just want a larger appreciative audience for my effort.

I have not used the microscope as much lately, mostly because the desk is now occupied by a large computer monitor for working from home. I only go in to the office two days a week, telecommuting the rest of the week. We’re all slowly learning how to be productive that way. The down side is that, having shown we can be productive from home, it’s clear that snow days are a thing of the past. (And, yes, I doubt many firefighters, police, or nurses are sympathizing much.)

My spare time has mostly been reading and working on geology articles at Wikipedia. The two tend to feed on each other; if I read something interesting, and the sources seem reliable, I work to add it to Wikipedia. If a Wikipedia article seems lacking, I find something to read that will give me information to fill out the article. Wikipedia has its problems, but I feel like trying to make its geology articles solid is worthwhile.

Tomorrow is Washington’s Birthday. Screw this “President’s Day” nonsense: Most have been pretty unremarkable or downright awful. But Washington deserves all the plaudits he gets. Only Lincoln is even in the running with him.