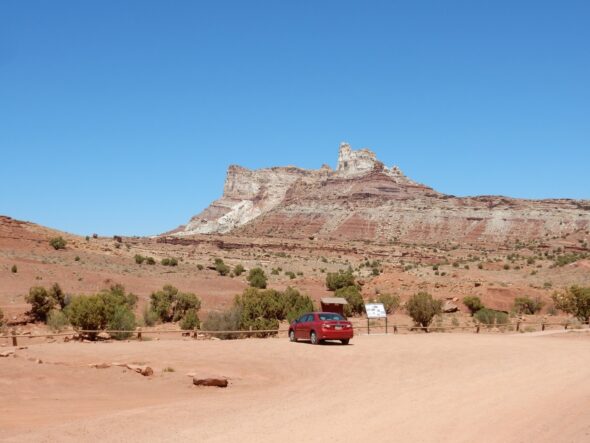 We awake to another beautiful morning.

We are camped within a canyon that breaches the San Rafael Reef. The reef is located on a major fault in the basement rocks underlying the reef. Movement on the fault, which mostly took place during the Laramide Orogeny 60 million years ago, has elevated the rock beds to the west by hundreds of meters. The overlying sedimentary beds, which are relatively ductile (capable of slow deformation) over very long period of time, ended up draped over the fault like a rug across a step. The beds are nearly horizontal to the east or west, but here dip steeply to the east. The most resistant beds, those of the Wingate Sandstone and Navajo Sandstone, are left as a spectacular hogback when erosion removes the softer beds above and below.

The San Rafael Reef gets its name, reef, from an analogy to an ocean reef, which blocks passage of ships except at narrow passes that penetrate the reef. The San Rafael Reef, and Capitol Reef to the south, were significant barriers to travelers in wagons, who had to search for canyons — passes — through the rock wall in order to cross the reef.

Last night, I noticed some of a well-known brand of candy scattered in a pile at our camp. This morning, they remain completely untouched by wildlife.

I have my doubts about consuming something that even desert pack rats won’t touch.

We eat breakfast, and Gary wanders out to look at the Chinle Formation just below its contact with the Wingate Sandstone.

The red mudstone here shows many features of mud flats laid down in a monsoon climate. These include burrows of organisms that sheltered from the dry season underground, such as crayfish and lungfish, and a pecular mottled appearance due to the effects of alternate wetting and drying on iron oxides in the sediments. I don’t know the area well, but I gather these beds are the Petrified Forest Member of the Chinle.

The photo doesn’t really do justice to it; the burrow has a definite pipe-like shape obvious in the original specimen.

This is probably petrified wood in the sandstone.

Petrified wood is fairly common in the Chinle Formation. This coarse conglomerate was probably deposited, along with the wood, in a point bar at the downstream end of an island in a braided river system. Braided river systems are typical of young streams with steep gradients, pointing to rejuvenation by tectonic forces late in Chinle time. Rejuvenation means that nearby uplifts increased stream gradients in an old stream so that it began to act like a young stream.

Or concretions, but there seem to be enough connected tubes to suggest numerous burrows.

This probably indicates prolonged monsoon conditions, typical of the Triassic Period. Pangaea was then fully assembled, and this area was just north of the equator.

We continue north along the cliffs. There is a prominent band in the Wingate Sandstone.

The dark zone may be a supersurface in the Wingate. A supersurface is a bed that can be traced for hundreds of miles. It probably represents a high stand of the sea that drowned the dune field and allowed everything above the water table to be eroded away.

We reach one of the uranium mines in the Chinle Formation. This one hit enough ore to set up an ore chute for filling trucks.

The Temple Mountain area hosted a brief uranium rush, and significant ore was extracted. All the mines are now closed.

Note the grafitti: BAD AIR. Radon, a radioactive gas released by radioactive decay of uranium, is indeed hazardous to health.

Mosts of the adits (horizontal mining tunnels) here have been cemented over. This one is merely gated. I wonder if the mining claim is still active, and the mine might be reopened if uranium prices rise enough.

Or so I think. I recall reading a magazine article where the author was taking Amtrak across the Continental Divide in New Mexico. He was drinking in the landscape, but a well-dressed young businessman glanced out the window and commented to his friend, “Can you imagine anyone actually living out here?” De gustibus non disputandem est.

Temple Mountain comes in to view. In the foreground are beds of the Moenkopi and Chinle Formations.

The Chinle is the cliffs to the upper right; these are probably Moss Back Member. Temple Mount is the white spire just coming into view. Everything else in the photograph is the Moody Canyon (higher ground) or Torrey (lower ground) Members of the Moenkopi Formation. These members are tidal flat deposits from the mid-Triassic, a time when life was just recovering from the disaster of the end-Permian extinction event. The seashore lay in western Utah and the coast was a very flat plain heavily influenced by tidal cycles.

The mountain is an outlier, composed of Wingate Sandstone that has somehow escaped being eroded away here behind the reef.

I have read in one of my books that there is a Sinbad Member of the Moenkopi Formation below the Torrey Member, and the Sinbad Member contains limestones beds with fossils. We are hiking to some yellowish beds we hope belong to this member. We do find ripplestone.

But while there are some very shaly beds here, there is no hint of limestone. We poke around for a while but find no clear fossils. We are almost at the foot of Temple Mountain.

I conclude that the thin yellow layer we’ve been poking at is not the Sinbad. But there are lighter beds to the west.

We head over and explore. There is a work of art in the gully.

I confess I am not much on environmental art. It seems like gilding the lily.

We find that the gully has eroded through the sandstone into a bed of black shale. Black shale has significant preservation potential for fossils; we poke at it for some time. However, we don’t get lucky.

Sole marks are casts in sandstone of an underlying mud bed that showed erosion features of water flowing across the mud. The sand blew in later and filled the features to produce the cast. One can deduce that the water flowed from upper right across the mud. Unfortunately, since this rock has obviously been jostled loose from its original position and inverted, we can’t deduce the original current direction. But sole marks can be very useful for determining river direction when the sandstone bed is extracted from bedrock.

The ripples are finer and seem to be oriented in two cross-cutting orientations. I’m not sure what that means.

Heading back to camp, we come across an early cabin.

We notice a set of adits in the cliff north of the road to our campsite.

Most are cemented over, but his one is shallow and they didn’t bother. You can see the blast holes where this was dynamited. We explore the area for a while. There is “color”, green and yellow patches of the kind that hint to prospectors of the possibility of ore. However, there’s not a lot of indication of extensive mining here, as at this morning’s mine. The cliff is likely Moss Back Member, the lower massive sandstone member of the Chinle in this area, which was a frequent target for prospectors.

We eat lunch. Gary sensibly settles down to nap through the heat of the day. I am feeling restless, and am reading an excellent book on the geology of the Colorado Plateau that describes the Sinbad Member in more detail. I conclude that the yellow beds we visited today were Torrey Member, bleached by petroleum moving through the beds, and we have to go considerably further west to see the Sinbad Member. The road west into the San Rafael Swell seems like a good, well-maintained gravel road, but I am nervous after yesterday. I decide I’ll hike some distance up it while Gary naps, and see the lay of the land.

On the way to the road, there is an outcropping of conglomerate.

I dunno; I found it striking at the time. From its position, I’d guess this is the Owl Rock Member, which is often a conglomerate.

The maintained camping area, with Temple Mountain in the background.

The signage attracts my attention.

I hike up the road to its first crest. In the distance is Flat Top.

Towards the right is where the road leads, and I’m imagining that the terrain in the distance is what my map calls Sinbad Country — which seems like a good place to look for the Sinbad Member. Turns out it’s all Torrey Member; the Sinbad is not yet in view.

Temple Mountain peeking over the ridge.

The foreground beds are all Torrey Member.

Temple Mountain is at left. The rest of the skyline is the back side of the reef, dominated by Wingate Formation sandstone cliff with a thin cap of Kayenta Formation. Most of the rest of the visible rock beds are Torrey Member of the Moenkopi Formation. A gray plug of rock at right catches my eye.

The plug is shown on my map as a sinkhole. There is a fair amount of limestone at depth below us, and some of this has dissolved out in caverns. Where the caverns have collapsed, the overlying rock has filled the sinkhole, and this rock is discolored grey from bleaching by hydrocarbons released from the underlying sandstone. There are several sinkholes mapped in the area, including some around Temple Mountain. I’ll get a better look at those tomorrow.

If I’m back in the area — highly likely, since this is a great no-fee camping area — I want to take a closer look at this feature. It looks almost like a plug, but there is an obvious intact rock bed in the feature that does not look much displaced. There’s stuff going on here I don’t fully understand.

Yet another view of Temple Mountain.

I arrive back at camp, and Gary is stirring from his nap. I report on the road and we decide to drive west to see if we can reach the Sinbad LImestone beds. It’s not long before we reach an exposure of obvious limestone.

The background is Torrey Member, but the gray rock in front is Sinbad Limestone. This represents a brief but sharp rise in ocean level that deposited a layer of marine limestone, interrupting the deposition of tidal flat sediments and separating the Torrey Member above from the similar Black Dragon Member below. Further east, the Sinbad thins and eventually disappears, and the Torrey Member then becomes indistinguishable from the Black Dragon.

We explore a nearby ravine where limestone is exposed.

Those look like fossil remains, but poorly preserved. Ditto:

We don’t find much in the ravine. Gary is still shaking down his new vehicle, and we return to camp. In the distance, the Henry Mountains.

We consider plans for the next day. Gary needs to work out some bugs with his vehicle, requiring a drive in to Green River, but there is no need for me to come. I’ll have a day to explore the area.

We spend the early evening watching a pair of ravens alternately dive from the top of the high cliffs to the north, then ride thermal currents back to the top. Gary wonders if they can see prey from that far up. It seems to me that the birds are enjoying riding the thermal currents. Do birds have souls?