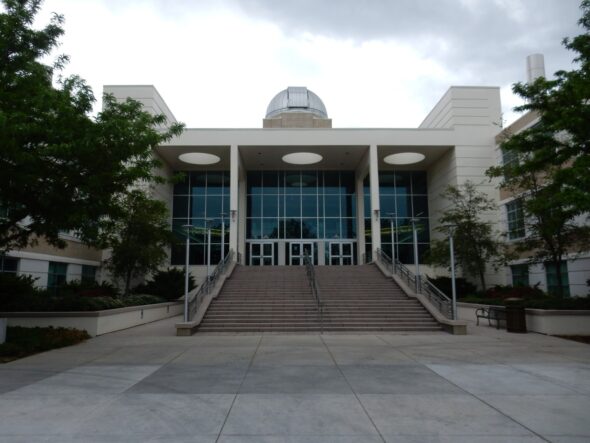 This is going to be almost entirely a personal post, with little geology. Don’t hesitate to skip ahead a day if that’s not to your taste.

I graduated from BYU in 1985 and have not spent substantial time on the campus since around 2000. It seemed appropriate to visit the campus again and see what it looks like today.

I park in a public area north of the Marriott Center, BYU’s ginormous multipurpose events arena. And by “ginormous” I mean that it can seat about 19,000 people, not bad for an entirely enclosed building. Here are the steps I climbed my first day of college to register for my first classes.

It’s just as I remember it.

I head west to Helaman Halls, where I lived my freshman year. Budge Hall was where most of the women in my ward (Latter-day Saint Christian congregation) were staying. It’s now a men’s dormitory. The door is locked; I can’t get a photo of the painting of my great-great-grandfather that is displayed in the lobby.

The Cannon Center, our cafeteria and local social hub. We called it the “Cancer Center” as a commentary on the quality of the food. (Which was actually not that bad, but college students.)

I did get tired of Brussels sprouts.

My own dormitory. Which is now a women’s dormitory.

Where my parents more or less pushed me out of the nest. Front curb. At the end of a long drive from Los Alamos, my parents had me get out here, parked my luggage on the curb, wished me “Good luck” and drove off.

My room was second floor, roughly at the center of the photograph.

The long steps up onto the main campus.

These, too, are as I remember. But the N. Eldon Tanner Building just to the north was under construction when I was a freshman, if memory serves.

Talmage Building. The math department. As a physics major with math minor, I spent a fair amount of time here.

Funky montage of mathematical symbols on the east facade.

Harold B. Lee Library. The greenhouse entrance is a recent addition.

Entrance to the underground physics lab. I was a student assistant here my freshman year. It’s been updated but still has a wonderfully krufty character.

There was a small Tokomak reactor here. The shielding was shelves and shelves of old punched computer cards. Turns out cellulose, with its high hydrogen content, is actually pretty good neutron shielding.

Kimball Tower. It was spanky new my last year at BYU. I think I had one class here, by Louis Midgley, on Democracy in America. He’s 90 now but still kicking, and I even have occasional online contact with him.

It looks like International Cinema is now housed here. I attended occasionally my freshman year. Some movies were good. But I also got to have the experience of attending one of those six-hour-long Soviet-era Russian films. (War and Peace. Whoda thunkit?)

The Foucalt pendulum. Not in operation due to COVID.

Someone has a really perverse sense of humor.

It makes me think how someone put a “Stark Industries” tag on a dummy nuclear warhead casing at my workplace. Apparently we don’t have a sense of humor; it was removed.

This is new. I spend several minutes enjoying.

This is more what I remember. They’ve kept it.

I head south of campus, to see Liberty Square, the apartment complex I stayed in my last two years at BYU.

Not how I remember it. It has been much, much upgraded.

BYU remains a very inexpensive school for its reputation, with tuition of just $5970 a year for Latter-day Saint Christian students and $11940 for others. (It’s the equivalent of in-state versus out-of-state tuition). But cost of living seems to have soared.

My apartment was towards the right.

But things have changed so much I can’t be sure. It was red brick when I was here. These may not even be the same buildings, though they look broadly similar.

I walk into the Provo town center. The old Brigham Young Academy:

Sigh. The tumor is a big glass-and-steel monstrosity in the background. Where some people see a religious center, others see potential business traffic to be exploited.

This temple was originally a historical tabernacle, a lesser and more public Latter-day Saint Christian place of worship dating back to the pioneer era. It was gutted by a fire, due to faulty electrical insulation, and the Church chose to upgrade it to a temple.

On the way back to campus, I find that the old gaming store is still there. Amazing. I buy the latest D&D book as a gift for Nathan.

Back at the science center, I find that my friend Richard Sandberg, formerly a member of my LDS congregation in New Mexico but now a professor in the physics department at BYU, has office hours at 1:00. I’d love to chat. I kill time by eating lunch at the old Cougareat (it’s now just a collection of fast food outlets) and perusing the bookstore. Security on the top floor, where textbooks are sold, has become very tight. Well, probably better that I not deprive some geology student of his textbook. The bottom floor, with general sales, is a bit sparse, but I find an interesting military history book. (I was much interested in this at one time.) I also visit the fine arts center, just because it’s there.

One of my best friends my freshman year got snarking one day about how modern art was so abstract that anyone could do it. He ended up slapping together a style parody of Picasso, “Laman and Lemuel Being Rebuked By the Angel”, that so amused us that he snuck it into the fine arts center and Scotch-taped it into the middle of the modern art display that was up. Because college students.

It is drizzling. I head to my friend’s office, but he never shows up. (He emailed me later — it turns out he was on break and took the day to clean up his yard, and was very sorry to miss me. Next time.) I return to Mom’s for the rest of the day.