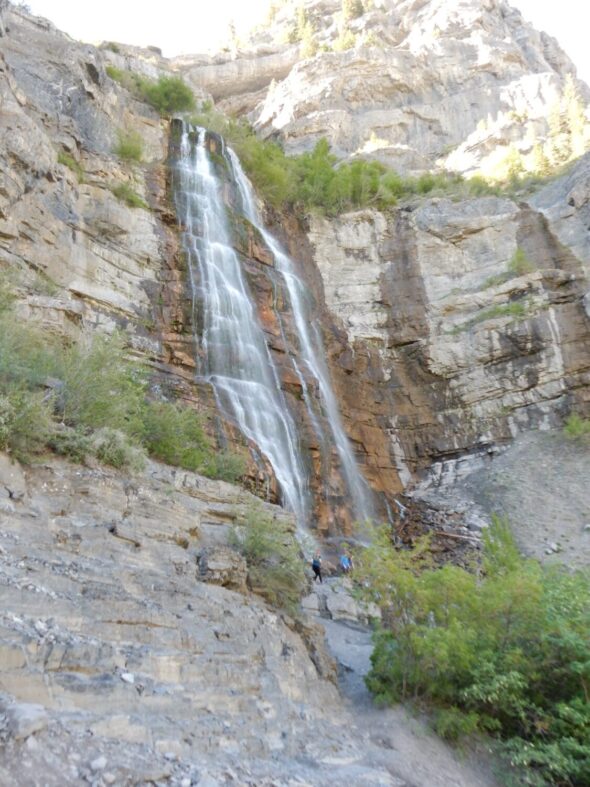 Though I did a fair amount of walking yesterday, I wasn’t really hiking. I decide this is a good day for a long hike not too far from Mom’s. After consulting my guide book, I settle on Provo Canyon.

I’ve photographed this before, but the camera loves it.

This is an outcrop of the Mississippian Great Blue Limestone at the mouth of Provo Canyon. It’s thinly bedded limestone and shale. I have not found fossils in a similar outcropping on the other side of the highway, but I may have just not looked hard enough. However, the description on the geologic map mentions no fossils.

I arrive at the trail head. There is a sign: “Trail closed.” Well crep. … Wait, this place is swarming with people, including on the trail …? I decide the signage is badly out of date and park. North of the parking area:

It’s going to be Pennsylvanian Oquirrh Formation all day. This formation apparently spans the entire Pennsylvanian, with some late Mississippian beds at its base and some early Permian beds at its top. That’s around 300 to 325 million years ago. With that great an age range, and the formation being up to 26,000 feet thick (!), it must be amazingly tempting for geologists to promote this to group rank and its members to formation rank. And I do find a few papers doing so. But the formation is so darn uniform — it’s thickly bedded, locally fossiliferous limestone for almost all of those 26,000 feet. This stuff was laid down in a shallow sea occupying a foreland basin east of the Antler Mountains, in central Nevada, which just kept subsiding and subsiding.

This is probably the Bridal Veil Member of the Oquirrh Formation. The other prominent member in the canyon is the overlying Bear Canyon Member, which forms the great massif of Mt. Timpanogos. The difference between the two is too subtle for me to easily pick out, but the description suggests the Bridal Veil is chertier and more fossiliferous. It also seems to be something of a cliff former, consistent with the chert making its beds more resistant.

More of the same south of the canyon. (Too much backlighting from the morning sun.)

The trail. SIgn says closed; but the gate is open and it’s in heavy use. Go figure.

I don battered straw hat, pack, and walking stick. A vaguely Gandalfesque figure. But maybe Odin is better; my right eye is bothering me, where it got lased at a star party a couple years ago. If I really want to play Odin, I ought to have a bare-breasted redhead riding a boar alongside me, but I’ve had no volunteers.

Looking up the canyon.

Again, with recent drought, the falls are not as spectacular as they should be.

There is a poorly marked spur trail from here to the very base of the falls.

There are indeed fossils.

You will definitely want to click on this, for the higher resolution image, to see the many brachiopod shells.

The falls, closer up.

The badly obscured message is “No rock climbing”.

The lower part of the canyon wall is Bridal Veil Member; the upper part is Bear Canyon Member. The lithological distinction (distinction in the physical characteristics of the rock) is quite subtle, so I cant be sure, but my guess (guided by my geologic map) is that the contact is about at the level of the shelf at left. The rock below is cliff-forming, less so above.

I return to the main trail. More fossils (albeit not well preserved) along the trail.

Water was precious in pioneer Utah, so naturally a bureaucracy was set up to control the diversion flume in the canyon.

Looking back down canyon.

Most of this is Bridal Veil Member.

View north through the trees.

We’re looking here into Slide Canyon. I wonder how it got its name?

The notch right of the small peak just across the road marks a locally important fault. This is thrown down on the east (right) side, bringing Bear Canyon Member to road level.

You can see the fault traced at far left. I didn’t realize or I’d have centered the picture differently. But this road cut is apparently all Bear Canyon Member.

Ducks at the diversion sluice.

I photographed this, in part, because I half-convinced myself there was a fault trice down the middle of the cut. I later looked harder and decided no. The map also says no.

Slickensides is a distinctive scratched pattern on a rock that shows it was in a fault zone. I am indeed at the foot of a canyon containing a large fault.

Vivian Park, the turnaround point I planned for myself.

It turns out this is where another fault has brought the Bridal Veil Member back up to road level.

There is an old railway here.

And suddenly I understand why the trail is so exceptionally well-developed: It is an old rail bed.

I really don’t understand graffiti. I have a hard time getting into other people’s minds as it is, due to a touch of autism. But this mentality is completely incomprehensible to me.

Some really nice beds exposed across the canyon.

The lower, darker, cliff face is Bridal Veil Member. The lighter slopes above are Bear Canyon Formation. This is probably the point on my hike where the distinction was as clear as it was going to get.

I arrive back at the Wandermobile, and head back to Mom’s for the rest of the day.