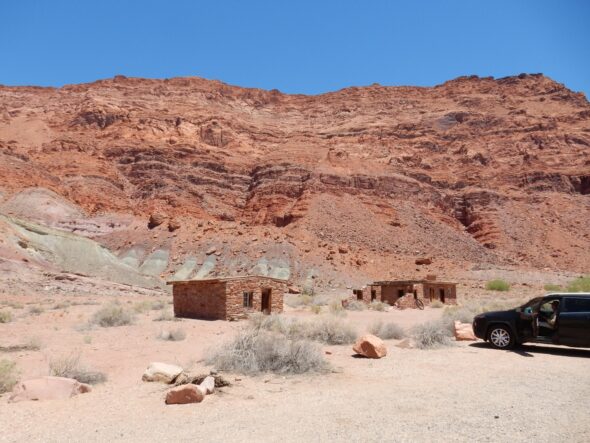 We breakfast and break camp, then head to the Glen Canyon Dam. The visitor’s center is closed, but there is an impressive slab of sandstone with dinosaur footprints outside.

It seems to be that there are two species of dinosaurs represented by the tracks here.

I realize that there are some people, including friends, who loathe the things. I just don’t feel that way. And I consider Lake Powell to be beautiful country.

The “bathtub ring” shows that water levels are somewhat depleted. The drought.

We head through town, replenish supplies at Walmart, and head for Horseshoe Bend. We have decided not to try for a lottery ticket for The Wave; if we don’t get it, and that looks unlikely, it’s a solid three hours out of our day wasted. And there is plenty else to do in this area.

Horseshoe Bend has become enormously popular in a short time — it has “gone viral”, as they say. The parking area now has toll booths and a developed trail. View northwest from the trail:

Everything here but the distant horizon is mapped as Navajo Sandstone, a Jurassic formation deposited in the vast arid deserts of the Colorado Plateau some 200 million years ago.

Here’s what the fuss is all about.

Alas, the sun is at my back, washing out the view somewhat. Still.

Me in my silly hat.

Navajo Formation on the rim. Erosion brings out the crossbedding.

The sandstone beds are unusually rich in beds of concretions.

My sense is that it is not definitely known how these form, but they may have started as colonies of iron-oxidizing bacteria. The beds may have been zones of mixing of water containing hydrocarbons, which use up oxygen reduce iron to a soluble form, with fresh oxygen-rich water percolating down from the surface. The bacteria feed on the reduced iron, oxidizing it to hematite, which encrusts the bacteria.

Boat in the canyon.

Crossbedding in the canyon rim.

I half expected it to scurry off to terrorize Raquel Welch.

Some of the beds here are very rich in concretions.

Here is a distinct bed almost solid with hematite.

There is also some ripplestone in the area.

We drive south to Bitter Springs, then north towards Marble Canyon. Soon we reach Red Point.

The local stratigraphy (sequence of rock beds) is well displayed here. The lighter rocks forming the valley floor are the Permian Kaibab Formation, which is mostly limestone and is about 280 to 270 million years old. Above this are red beds of the Moenkopi Formation, forming Red Point itself, which were laid down by rivers in an arid coastal plane in the Triassic, about 240 million years ago. In the cliffs behind Red Point, the Chinle Formation forms a second sequence of less resistant red beds (containing more mudstone and less sandstone) that form a steep slope over the Moenkopi ledges. The Chinle is also Triassic, about 230 million years old. The rim of the cliffs is underlain by Moenave Formation. This would be lates Triassic or earliest Jurassic in age, about 200 million years old.

The stratigraphy is the same as what I just described. This implies that the entire vast valley between east and west has been eroded out and dumped in the Gulf of California by the Colorado River.

Closer view of the stratigraphy.

Moenkopi forming the foreground bluffs; Chinle forming the slopes at the base of the cliffs; over this is Moenave Formation, possibly with a cap of Kayenta Formation in places.

Really nice view of Moenkopi across the Colorado River to the east.

The Moenkopi has always seemed more chocolate-brown to me than red.

Looking the other way.

Gary and I figure this is a good place to explore the upper Kaibab Limestone. Which includes some conglomerate:

but is mostly limestone.

The conglomerate was all as boulders in the arroyo, and not as outcrop. They may be from the overlying Shinarump Conglomerate.

There are indeed some not terribly well-preserved fossils in the limestone.

The limestone is thinly bedded and rather dirty, with some interbedded mudstone.

There are some interesting structures in the mudstone.

The first set look like burrows of some kind. The second may be simply calcareous concretions in a paleosol (fossil soil). And these

We arrive at Lee’s Ferry.

Lee’s Ferry was the only good crossing until you reached the other end of the Grand Canyon. Upstream, Crossing of the Fathers was an alternative, now drowned in Lake Powell (but of course there’s now the engineered crossing at Glen Canyon Dam.)

The gray beds are Chinle Formation claystone that was once mined for gold. There is actually some colloidal cold in the clays, but extracting it economically proved impossible.

Turns out the gold in the clay was contaminated with rhenium. Nowadays, “contaminated” would not quite be right.: Price of gold today is $1856 an ounce; rhenium, $1486 an ounce.

Looking west across the area.

The shelf prominent on the left side of the river, but also present on the right side, is Shinarump Conglomerate, the lowest member of the Chinle Formation. Everything below is Moenkopi Formation; everything above, except in the background cliffs, is Chinle Formation, probably Petrified Forest Member.

We take a long lunch break, then head out. There is confusion: I see what looks like a black Jeep behind me, but when it turns to go a different way, I realize it’s not Gary. I had told him I would meet him at the visitor’s center for Vermillion Cliffs National Monument, which I thought was at Marble Canyon, so I head that way. No sign of Gary or a visitor’s center. I drive on a little ways, then stop, consider, and turn on my cell phone. I normally keep it off to save batteries when there’s no cell coverage; otherwise it exhausts itself trying to find a cell tower. We reconnect, rendezvous, and return south.

Turns out the visitor’s center, such as it is, is at Navajo Bridge.

I pull over for something too good not to point out to Gary.

Lookit those curved beds. Alas, my geologic map doesn’t show structural features in any detail, but something has warped the beds upwards along the base of the cliff, most likely a deeply buried fault.

The cliffs go on for many miles.

The last photo, from here, shows low hills of Moenkopi Formation capped with Shinarump Conglomerate. Above are red mudstones of the Chinle and sandstones of the Moenave.

We pass through a busy intersection; the whole area is a madhouse. Lots of people with accumulated vacation who are finally vaccinated, I suspect, and now out on the road. Like us. But there is a lot of mudstone that I wonder if it might be something new.

No, just Chinle mudstone that must have been laid down at a time of increased organic productivity. There was enough organic material in the mud to bleach it gray. Judging from this chart, it’s got a carbon content around 0.2% and the iron content is at least half in the reduced form.

We cross the Little Colorado River and turn west towards the Grand Canyon. (Roundabout. Highway engineers are in love with the things.) The road passes some beds of the Moenkopi Formation.

This area is the type area for this formation, and this spot is close to the reference section for the Moenkopi. Which is on tribal land — I can’t really get close.

But this turns out to be the reference section in deep telephoto shot.

Gary appreciates a rest stop, but has seen enough horizontal red beds of rock today that he does not fully share my enthusiasm. I am kind of a nerd about it.

View of cinder cone to north.

This is Humphreys Peak north of Flagstaff.

Kinda. This is actually Dead Indian Canyon (that’s what the map says), the canyon of the Little Colorado just east of its confluence with the Colorado, but I’d call it part of the Grand Canyon system.

My map is short on details, but this is likely the Kaibab Limestone.

I didn’t spend much time in the eastern Grand Canyon this trip, but my best estimate is: We’re standing on Kaibab Limestone, Permian in age (around 280 million years), which forms the canyon rim. Below this are the Permian Toroweap Formation, forming the thin reddish layer below the rim. Then a massive cliff of Coconino Sandstone, a reddish slope of Hermit Shale, and then we’re in the Pennsylvanian (around 310 million years) with the red ledgy slopes of the Supai Group. The Supai Group also underlies the nearby bluff at left. Below this is the Mississippian Redwall Limestone (around 340 million years), which does indeed look like a red wall in the distance. Then comes gray limestone beds of the Muav Limestone, which takes us to the Cambrian in age (around 510 million years old), and gray slopes of the Cambrian Bright Angel Shale. Below this are cliffs of the Tapeats Sandstone, then we jump to the Proterozoic (older than 540 million years) with the inner canyon. Here the rocks of the inner canyon are sedimentary beds of the Grand Canyon Supergroup and other formations, which are visibly tilted relative to the beds above them.

The upper beds are tilted, too, towards the Kaibab Plateau at left. The Colorado River, and Grand Canyon, cut right through the plateau.

We find our campsite and set up.

Then we scout out the trailhead for the Bright Angel Trail, which we plan to hike in the morning. The view nearby:

Same strata as before, except that the inner gorge is now Vishnu Schist and other metamorphic rock.

A couple more shots from along the trail.

The light is failing and we return to camp for the night.