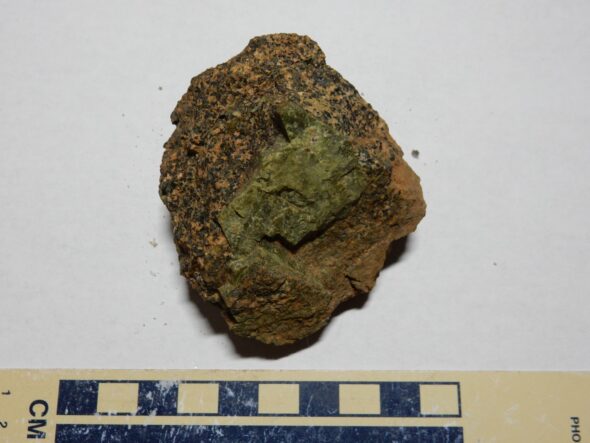 This isn’t a wanderlust post per se. I spent yesterday catching up chores, so that I could do a wanderlust tomorrow (Labor Day) with a clear conscience. Hopefully my next post will be the usual photo-laden account of a geologic adventure.

But sometimes I stumble across some facet of geology that is new to me and turns out to have some really neat science associated with it. This week, it was serpentinization, the process that forms serpentinites.

You need three things to make a serpentinite: A body of magnesium-rich ultramafic mantle rock; water infiltrating the rock that doesn’t carry too much silica or carbon dioxide; and temperatures that are not too high (by geologic standards).

Let’s go over those one by one, then look at how they come together to make serpentinite.

An igneous or metamorphic rock is described as ultramafic if it has a silica (SiO2) content below 45%. Ultramafic rock susceptible to serpentinization also has a high magnesium content, as much as 40% MgO. Most of the rest is iron oxide, with smaller amounts of aluminum oxide and calcium oxide, quite small amounts of sodium and potassium, and traces of all the other chemical elements. Such rock is composed mostly of the minerals olivine, orthopyroxene, and clinopyroxene, and will be classified as either dunite (almost pure olivine), harzburgite (olivine plus orthopyroxene), or lherzolite (all three). These are the main rocks forming the Earth’s upper mantle, with lherzolite being most common, harzburgite representing mantle rock from which magma has been extracted, and dunite likely a cumulate of olivine crystallized out of magma that cooled while still in the mantle. Collectively, these magnesium-rich ultramafic rocks are known as peridotites.

Mantle rock is normally buried under miles of crust rock. Small fragments occasionally are brought to the surface by volcanic activity; Gary Stradling and I found many such mantle xenoliths on our trip last fall.

Mantle rock typically has this coarse-grained, greenish appearance. This particular chunk of mantle rock is embedded in the basalt which carried it to the surface, and it’s likely a lherzolite. The bright green grains are mostly olivine, while the darker grains are pyroxenes.

To form a serpentinite, you need a sizable mass of peridotite. Mantle rock comes close to the surface in three places: At slowly spreading mid-ocean ridges, where the crust is very thin; in the forearcs of subduction zones, where it is uplifted to the surface by tectonic forces; and in ophiolotes, which are slabs of oceanic crust that somehow get shoved onto a continent. Ophiolites are in some sense “accidental”, though they probably account for most of the serpentinite most geologists get to study.

The second ingredient is infiltrating water that does not have too much silica or carbon dioxide in it. Seawater works just fine, and most serpentinite forms in the peridotite of mid-ocean ridges, where fracturing allows seawater to seep into the rock. In mantle forearcs, the water comes from subducting slabs of oceanic crust. In ophiolites, if the rock is not already serpentinized when the ophiolite is emplaced, then groundwater can do the job.

The third ingredient is relatively cool temperatures, below about 400 C (750 F) and probably closer to 200 C (390 F). At higher temperatures, water is driven out of the rock, rather than serpentinizing it.

When the water seeps into the peridotite, it starts reacting with the olivine. Olivine is a mixture of magnesium and iron silicates, with the formula (Mg,Fe)2SiO4. There’s about nine times as much magnesium as iron. The reaction is initially:

This produces serpentine minerals, all of which have the approximate formula Mg3Si2O5(OH)4. This rapidly uses up any loose silica from the rock. In chemist’s language, it greatly lowers the chemical activity of silica in the rock, to the lowest levels found in any common crustal rock. Once the silica is gone, serpentinization continues via the reaction

So in addition to producing more serpentine, the reaction produces the mineral brucite, Mg(OH)2. Bruce is excellent at scavenging any remaining silica in the rock or infiltrating fluids.

Meanwhile, orthopyroxene is also breaking down:

The new mineral here, Mg3Si4O10(OH)2, is talc. Yes, this is the main ingredient in talcum powder. But as silica continues to be scavenged, the talc in turn is converted to serpentine:

So magnesium olivine and orthopyroxene is converted to serpentine and brucite, scavenging every trace of available silica in the process.

Meanwhile, what is happening to the iron minerals? The iron in these minerals is mostly in the less oxidized ferrous state, and mostly present in iron olivine (fayalite), Fe2SiO4. This forms part the famous FQM (fayalite-quartz-magnetite) buffer, through the equilibrium:

Fe3O4 is magnetite, a kind of weird combination of less oxidized (ferrous) iron and more oxidized (ferric) iron that is peculiarly stable. This reaction can go either way, and forms a buffer that maintains the oxygen level at a low but not nonexistent value. Most igneous rock of the Earth’s crust has a chemical activity for oxygen close to the value that keeps fayalite and magnetite/quartz in equilibrium. If oxygen drops, some of the magnetite and silica convert to fayalite and oxgyen, restoring the balance. If oxygen rises, fayalite absorbs oxygen and decomposes to magnetite and silica.

This results in all kinds of weird and wonderful chemistry. Any sulfur compounds in the rock are reduced to hydrogen sulfide, H2S. Hydrogen sulfide is excellent at scavenging any dissolved metals to produce insoluble metal oxides. These include mackinawite, a nickel sulfide. Reducing conditions can be so extreme that nickel is reduced to the metal, usually as an allow with metallic iron called arawuite.

Carbon dioxide is reduced to methane, CH4. Water itself is reduced to hydrogen gas. Both come bubbling out of the serpentinite, and on the ocean floor, they emerge at hydrothemal vents to feed communities of microorganisms. It’s thought that life itself may have originated at such vents.

It turns out I got a sliver of the stuff last May in Arizona with Gary Stradling.

The green stuff. However, this was just a vein of serpentine minerals. It likely formed from a vein of dunite in a body of more silica-rich rock that was part of the Payson ophiolite. I want some of the massive stuff.

Googling tells me that there is, in fact, on location in New Mexico that has the stuff: Here. That may actually be accessible, by gravel road and a bit of hiking from the nearby village of Redrock. However, the drive is several hours from Los Alamos, and there’s nothing it’s on the way to that I visit regularly. It would have to be a special trip.

On the other hand, there’s lots more interesting geology in the area. So maybe. (Not this weekend.)