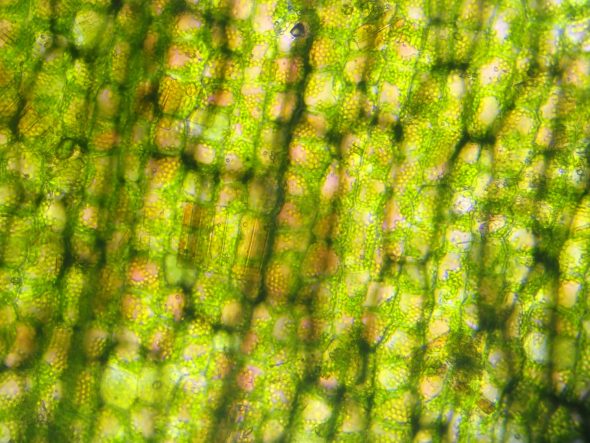 Another post with possibly TMI. I’ll save that for the end to make it easier for you to skip it, if you prefer.

I have been continuing collecting photomicrographs for the aquarium page. The latest includes a nice sample of Vallisneria leaf with beautiful chloroplasts visible within individual leaf cells.

(Click to enlarge, as you can do with most images at this site.) Vallisneria or eelgrass is a popular aquarium plant, doing well with a wide range of lighting and indifferent fertilization. It grows as long, ribbon-shaped leaves emerging from the base of the plant, which puts out runners to propagate new plants. It’s one of the few true aquatic plants kept in planted aquariums. (Most aquarium plants are actually terrestrial plants that have the ability to adapt to living submerged, often by switching the kinds of leaves they put out.)

You can see individual boxy leaf cells, with small round chloroplasts mostly near the walls. Chloroplasts are the individual organelles that carry out photosynthesis. They’re roughly the size and shape of a large bacterium, have their own membrane and bacterium-like circular DNA strand, and are now thought to have originated as cyanobacteria, probably relatives of Gloeomargarita, that were somehow engulfed by a primitive eukaryotic cell but not digested. The cyanobacteria got shelter and nutrients from the eukaryote host and in return provided photosynthetic products like sugars. Eventually the two became incapable of existing without each other, with the chloroplast losing many genes for essential enzymes and the host eukaryote losing genes for some products of the chloroplast. So far as molecular biologists can tell, every photosynthetic organism but one (an unusual photosynthetic amoeba) is descended from a single eukaryote that engulfed a single cyanobacterium, back at least a billion years ago.

Next: I continue attempting to identify the precise species of green brush algae in my tank.

This stuff has very few branches and very few cell boundaries along individual filaments. It is also impossible to pick out individual chloroplasts, though the vivid green color seems to rule out a red alga.

High magnification focused in the middle of the strand.

The round blobs might be individual closely packed chloroplasts, but they might also be storage organelles within a single netlike chloroplast.

Here is a rare cell bondary within a filament, with a new branch forming?

Or this may be a reproductive organ. Most algae reproduce sexually as well as asexually. (Apologies to the delicate-minded.)

Here’s a rare cell wall within a filament.

Putting all the clues together, my best guess is that this is a species of Vaucheria. This is a yellow-green alga, or xanthophyceae. These are a smaller class of algae related to brown algae but lacking the fucoxanthin that make brown algae brown. Their photosynthetic pigments thus resemble those of green algae and green plants.

Algae experts stumbling across this blog are more than welcome to correct me in the comments.

This I spotted and wondered about.

It has the darker color of a red alga, and so might be an unusually old filament of Aoudinella, black brush algae. Their filaments normally are strings of individual cells, but when the filaments get old enough, they might form a tube of cells. Or this could be a different red alga such as staghorn algae.

One of the things about an epidemic disease is that it’s very hard to know, in the middle of the epidemic, if we are overreacting to it. If extreme measures are taken, and there ends up being no more deaths than are typical of a seasonal flu, it will be very difficult to tell whether we overreacted or whether our reaction was simply successful in averting a crisis. Exponential growth can be very hard to characterize because of its explosive nature.

I suppose that’s an argument for overreacting. If you don’t know, be prudent. Later there will be a very careful analysis to tease out the data and decide just how dangerous this bug really was. My wild guess is we’ll find we overreacted. But I’ll be happy to admit it if the analysis shows I’m wrong. And I won’t be inclined to be hard on those who reacted forcefully if the careful analysis shows this bug was not that much worse than a seasonal flu.

The reaction here in New Mexico has been to close all public schools for the next three weeks. Fine. My church has canceled all services until futher notice. Also fine. I note that our leaders switched from a three-hour Sunday service schedule to a two-hour schedule a little over a year ago, and encouraged members to begin having an hour of “home church” on their own. That really seems inspired now. The Latter-day Saint tradition of lay clergy means that many of our households include men ordained to the priesthood who can carry out the basic sacramental services in their homes when authorized by the local bishop. Our members are also already organized to check on each other through our ministering program, also based on lay clergy. So we’re remarkably well positioned to weather this spiritually.

My employer has cancelled all travel but there are, as yet, no instructions to not report to work as usual. (Today is my 9/80 Friday off.) We’ll see if that changes. I suspect they will go no further than encouraging more telecommuting and canceling meetings above the team level.

The local grocery stores have run completely out of toilet paper, and are seriously depleted in bottled water and, oddly, meat. Fruit is still abundant but I suppose there’s not much use me stocking up on fruit; won’t keep. Milk has also remained on the shelves; also too perishable. But bread has disappeared, and it’s also perishable. (Meat you can freeze.) Disinfectants are in short supply, and when I looked for some diabetic-friendly cough syrup, just in case, there was none to be found. Which brings up …

This is where I possibly get a bit personal for some readers. Don’t feel badly if you prefer to skip.

I got a call Wednesday that the neurologist had had a cancellation and he could get me in early Thursday morning, three weeks sooner than scheduled. Of course I took up the invitation. The neurologist is a Dr. Ravi out of Denver (!) who comes down to northern New Mexico periodically. He notes, as if I didn’t already know, that there is a real lack of medical resources in this state. However, I was surprised that he does not consider this a sign of an impoverished state; he notes that the same problem exists in Wyoming, a quite rich state. It’s apparently much more to do with the rural character of the states.

The bottom line is mixed news, but I think more good than bad.

1. Diagnosis is confirmed: Intercranial hypotension likely from a torn meninge. Confirmation of the diagnosis is good news.

2. I show subtle abnormalities in some reflexes. “We cannot wish this away” was the doctor’s way of summing it up. This needs to be treated. That’s bad news.

3. Treatment consists of finding the leak and plugging it with a glob of my own blood. Apparently this has a high success rate and is curative. That’s good news.

4. Finding the leak is not an outpatient procedure. It will require a stay in a hospital. That’s bad news, though since the plugging procedure also has to be done in a hospital and is probably done during the same stay, it’s not too bad news.

5. That hospital will have to be UNMH, because that’s where the only two neurosurgeons in New Mexico who do this are located. That’s bad news.

My sense is if I had seen Dr. Ravi in his office in Denver, he would have admitted me to the hospital on the spot and just got it done. As it is, he promised to contact the neurosurgeon right away to get me in. I have no idea how soon; I still haven’t heard yet as of this morning; but it sounds like I’ll be in the hospital for a few days sometime between tomorrow and five months from now. :rolleyes:

How’d I tear the meninge? We’ll know better when the tear is located. Three possibilities: I cracked my head rather hard on the base of those weird spiral stairs in my house a week or two before this and it might have happened then. I threw out my lower back two or three weeks before this started and I might have torn the meninge at its very lowest end. I have mild arthritis in my middle back (have for years) and a bone spur might have made a leak. Hope it’s not the last; that would require treating the bone spur along with plugging the leak.

This is, of course, a terrible time to have a necessary but not urgent procedure. My life is not in peril at the moment, and I may find it’s hard to get a hospital bed for a while. (Though there have only been a handful of coronavirus cases in New Mexico so far.) It’s also a terrible time to have a condition that is aggravated by coughing; as I noted, I can’t find diabetic-friendly cough syrup anywhere now.

Will keep those of you with strong stomachs and an interest updated.