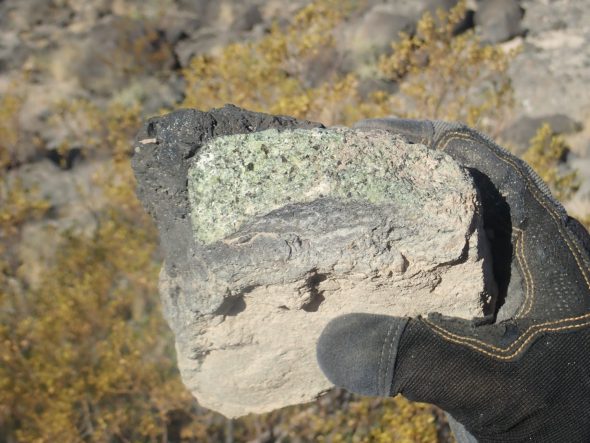 Morning of the last day.

We’re looking at the southeast rim of Kilbourne Hole in the Potrillo Volcanic Field of southern New Mexico. Yesterday we explored and found dropstones but no mantle xenoliths, which are one of the most interesting and scientifically important aspects of the area.

Kilbourne Hole is a maar, a kind of wide, shallow volcanic crater whose rim barely rises above the surrounding country. They are typically formed by magma rising to the surface and encountering a shallow aquifer. The resulting steam explosions blast a great hole and deposit pulverized debris around the rim. We saw lots of evidence of that yesterday.

But in the case of Kilbourne Hole, the explosions gradually excavated a vent so deep that rocks from the deep crust and upper mantle, 30 kilometers down, were ejected from the vent. These are the mantle xenoliths, so-called because they are “foreign” to the basalt magma that carries them to the surface. They are of great scientific interest, because it is impossible to mine or even drill 30 kilometers down; we can examine only the samples of mantle rock that Nature offers us in such eruptions.

Yesterday we found no xenoliths, but the description in our road log suggests we were too far south along the rim. This morning, after breaking camp, we’ll try exploring further north.

This is a small block fault range in the middle of the volcanic field, most of which is to our west. The whole field, including Kilbourne Hole, is now part of the Organ Mountains National Monument, established just a few years ago.

We drive north to a likely spot

and I ascend the rim. Almost at once I spot my first mantle xenolith.

A very distinctive green and black coarsely crystalline rock. This particular kind of mantle rock is called lhertzolite and it’s the kind of mantle rock that produces most basalt lava, from partial melting of the least heat-resistant minerals in the rock. Lhertzolite is mostly olivine (the green stuff) and pyroxene (the black stuff) but with occasional bits of other minerals.

The sun is at my back and I can get a really decent panorama of the crater.

The crater is about two miles across.

I start down into the crater proper. There are bits of greenish-black crystalline rock everywhere.

This one is still embedded in the basalt it came up with.

Close to the crater floor, I find a whole collection.

Someone collected bits and piled them on this rock. Probably a rock hound sorting out the inferior samples to leave behind (though these look pretty good). This area was open to collecting until just a few years ago, when it was designated as part of a national monument.

Some bits were really quite large.

I also see some xenoliths that may be deep crustal rock. This one may be a garnet paragneiss, a type of rock that has been closely studied for clues to the evolution of the crust here.

This, children, is why we can’t have nice things.

Someone has crushed a bunch of xenolith, likely looking for the rare larger crystals that have some value as gemstones. This kind of mantle rock does not contain diamonds, but it sometimes has larger crystals of olivine, known as peridot in the gem trade, of modest value.

It’s as bad as the stories I’ve heard about folks melting down poached dendritic gold for its bullion value. It’s worth ten times as much as a geologic specimen.

Gary has an eye for the very best samples.

We climb out of the craters, my fingers itching but empty, but my camera full of photographs. We drive east back to civilization.

Civilization in the shadows of the Organ Mountains.

There wasn’t time to explore the geology, but it looks interesting.

I don’t understand people who get bored in retirement. I would ask Gary, who is now retired, but I don’t get the sense he understands it, either.

Definitely some interesting geology there; the mountains apparently sit right on a caldera ring fracture, so the northern part is Paleozoic rock and the southern part is volcanic, with some visible structure. I have a road log somewhere; we’ll have to visit sometime.

There’s a new national monument there, Prehistoric Trackways National Monument. However, the web site makes it sound like they are just getting organized and don’t actually have any trackways open to visitors. So I didn’t include it in the plans.

The visible beds are apparently Pennsyvlanian and Permian in age.

Here is where I had originally planned to camp the previous night.

We stop for lunch in San Antonio, New Mexico, at the Buckhorn Tavern. It’s only our second purchased meal this trip. Green chile cheesburgers, and they’re to die for. Well, not literally; I do hope we didn’t expose ourselves to COVID here. The restaurant is very sparsely occupied and everyone has masks, except, of course, those consuming meals. There is what appears to be a grandfather with a grandson, perhaps twelve years old; the grandfather looks about my age. Having a burger together.

Our waitress is a graduate student at New Mexico Tech, working her way through school. I tell myself to be generous with the tip.

Then off to Abo Pass. We miss the first road cut I would like to have visited, but we are pressed for time. The second cut appears to be in Sandia Formation.

My guess isn’t too far off. This is Wild Cow Formation, which is just a little younger than the Sandia Formation. Pennsylvanian beds. It can sometimes be quite fossiliferous, but we don’t find much here. I have to drag Gary away; we’ve been on the road a while, the green chile is proving a bad combination with some sugar-free candies I bought, and I need to find a rest area badly.

Turns out it’s the contact between the Pine Shadow Member and the La Casa Member of the Wild Cow Formation.

Whatever else we do here, I have got to get some pictures of the Abo Formation in Abo Pass.

Classic Permian red beds. Laid down as the sea retreated to the south and a delta grew across New Mexico, 300 million years ago.

Finally, a wonderful road cut in the formation, at its type section.

Then in to Mountainair, where we find a ranger station and make a rest stop. The local gas station is completely out of gas. We try Willard and finally find fuel in Estancia.

We pass Epstein’s Zorro Ranch. Google delicately describes it as a “night club.”

We come to our last geologic feature this trip, a large dike.

This intrudes Mancos Shale. It is one of numerous dikes in the area that appear to radiate from the Ortiz Porphyry Belt, an area that was volcanically active about the same time as the Mogollon-Datil volcanic field we saw at the start of the week.

And, finally, we are home, just after sunset.

It’s been a wonderful week.