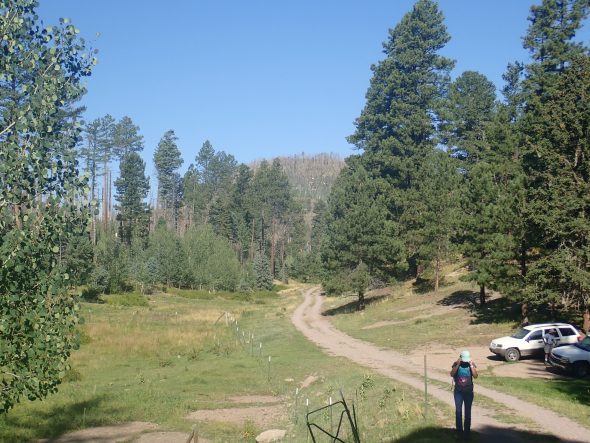 This is a hike I’ve been contemplating for some time. However, I’ve had lots of other interesting things to do, and settled on finally doing this hike this weekend largely because of a combination of favorable weather and a desire to take a new friend and his family on a reasonably easy hike to an interesting location.

Alden Stradling is Gary’s son, who just took at job in Los Alamos, and with whom I hit it off almost at once. Sometimes you meet someone and are fast friends after five minutes (though not nearly often enough.) It turns out Alden and his wife, Dorothy*, are fairly enthusiastic outdoors people. So I invited them and their three children, along with Gary, to hike to Obsidian Ridge. Alden et al. are still growing new red blood cells, as he put it, after moving from coastal Virginia to Los Alamos (ca. 7000′) so a gentle hike seemed in order.

A bit of background, and I beg your indulgence for me quoting myself at length from an earlier post. This is Obsidian Ridge.

As with most images at this site, you may click to enlarge. At center are prominent white cliffs of Bandelier Tuff; these are at the west end of Mesa del Rito. (We are looking south, so that would be on the right end of hte mesa.) Right of the spur at center right is Sawyer Mesa. The ridge connecting the two is Obsidian Ridge. The three are sections of one long finger mesa.

Okay, let’s unpack that. The Otowi Member and the Tsherige Member are ignimbrites from two giant caldera eruptions in the Jemez Mountains. These eruptions produced extremely viscous magma with a high dissolved gas content, which basically exploded into a red-hot mixture of gas and microscopic shards of volcanic glass when it reached the surface. This mixture was heavier than air and flowed across the surface for miles in all directions (pyroclastic flows) before settling to the surface and compacting into a hard rock called ignimbrite. An older term for ignimbrite is tuff, and though the two are not quite synonymous, geologists tend to use them interchangeably.

After each giant caldera eruption, smaller eruptions took place as magma leaked from the fissures where the caldera collapsed. In the case of the Toledo event that produced the Otowi Member, one of the smaller subsequent eruptions produced Rabbit Mountain. The sides of the Rabbit Mountain dome repeatedly collapsed, exposing the still-hot interior and sending an avalanche of glowing rock fragments for eight miles downhill. This avalanche debris is rich in fragments of obsidian.

Here’s a video of a glowing avalanche.

At the trail head.

Gary and his grandson, Liam, are at right. The two daughters, Aubrey and Marian, at at center, while Alden is lurking in the shadows at left.

Beware; the gravel road is a bit gullied. Just past here, there is a locked gate with a hiker/biker portal, and, beyond that, there are several large trees down across the road. These are fairly recent, not more than a few months; I suspect from a big windstorm we had this past winter. So the road would be impassable even if not gated.

Looking back at Rabbit Mountain, the source of the obsidian-bearing avalanche.

Rabbit Mountain is thought to be only a remnant of the original dome. Aside from the collapse events that produced the glowing avalanches, it’s though that much of the original dome foundered into the Valles Caldera during the Valles event 1.25 million years ago. The portion we see today is mostly resting on pre-caldera andesite, which crops out in a few places here and there around its base.

It’s a reasonably pleasant hike, with the first part crossing Sawyer Mesa with its partially burned forest from the Las Conchas Fire. Eventually we come to the end of the mesa and a more open view into Alamo Canyon to the south.

We reach the top of the spur that is our nominal destination. I had thought to hike along the spur and hunt obsidian, but it looks like a very scrubby bushwack. However, there’s a wonderful view down Frijoles Canyon.

Here’s the geologic map for the area.

We also see that the low ridge in the canyon bottom in the middle distance is underlain by Paliza Canyon Formation andesite. The Paliza Canyon Formation is precaldera volcanic rock, erupted mostly between 11 million and 7 million years ago, that probably accounts for nearly half the original volume of volcanic rock in the Jemez. It differs from the Bandelier Tuff in that it was a lower silica, much less viscous magma that erupted repeatedly and effusively in small volumes rather than in a small number of colossal explosive caldera eruptions. (An effusive eruption is one that involves the relatively gentle flow of magma out of the ground.)

We hike further east, to where the Tsherige Member has been eroded to expose the Rabbit Mountain avalanche. Looking back west along the trail:

The foreground ridge is the cap of Tsherige Member that ends just up the road. Unfortunately, it lies squarely across the view of Rabbit Mountain. But at center you can see Sawyer Dome just peekingt over the foreground ridge, and to the right is the mass of Cerro Grande. Sawyer Dome and Cerro Grande are the southern portion of the Sierra de los Valles, which forms the spectacular skyline west of Los Alamos. This is Tschicoma Formation, erupted mostly between about 5 and 3 million years ago. It’s among the youngest precaldera rocks in the Jemez and forms the east rim of the Valles Caldera.

There is indeed obsidian in the area, with numerous coin-sized fragments in the road bed and an occasional larger fragment. Gary, Alden, and Liam trudge down the slope to the north to hunt form something better, and eventually come up with an obsidian chunk about the size of a soccer ball. Gary needs to be heading back, so we start back along the trail. And I’m having so much fun talking to Gray, Alden, and Dorothy that I neither grab any samples or take any pictures. Well, I pretty much have what I came for, anyway.

And from there, home.

*Naturally, I thought at once of: